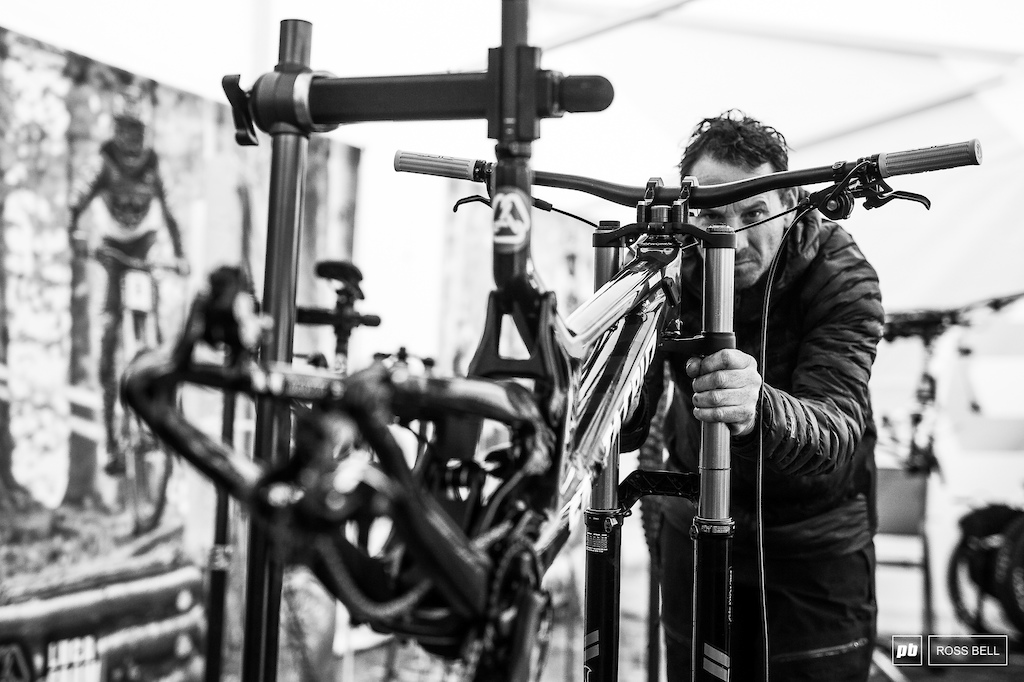 One of the most successful racer/mechanic pairings has come to an end as Greg Minnaar has announced he will no longer be supported by Jason Marsh on the World Cup circuit. Marshy and Minnaar first started working together in 2012 and in an 8-year partnership they have claimed 2 World Championships, 6 World Cup wins and 28 World Cup podiums.

Off the racetrack, the pair were instrumental in bringing 29er wheels to World Cup racing after Greg raced a Hightower at the Enduro World Series in Finale Ligure and Marshy worked with Santa Cruz and Fox to make it a reality. Marshy also provided plenty of laughs and good times through his appearance on the Syndicate's team videos, where he was open and insightful about the racing process and the attention to detail that goes into refining a race winning bike.


Greg Minnaar's new mechanic will be Lyle Hyslop, who works in the Santa Cruz showroom in Morzine. The pair will be working together at their first race this weekend at round 2 of the French Cup in Les 2 Alpes.

We wish Marshy all the best in his future endeavours.

Staktup (Aug 16, 2020 at 7:24)
GOAT got Ratboy’s doppelganger, huh? Lime Minaar, Marsh seems like such a class act. Wish him the best in his new chapter, and hope Lyle can keep Minaar’s winning ways alive for more years to come

jclnv (Aug 16, 2020 at 8:10)
Jason has a huge passion for dance so I think it’s likely he’ll open a dance school or maybe we’ll see him on TV in a celebrity dance show. Exciting times either way.

ceecee (Aug 16, 2020 at 8:24) (Below Threshold)
Syndicate cost-cutting? We still don't know what racing is going to look like next summer.

seadog275 (Aug 16, 2020 at 8:58)
Everyone is dealing with the current situation differently, maybe decided its time to call it a day on trotting off round the world. Or marsh guard has done well enough that he doesn't actually need to anymore

PNdubRider (Aug 16, 2020 at 9:22)
@ceecee: Top WC riders often employ their mechanics themselves as opposed to the mechanics being employed by the team.

lauda (Aug 16, 2020 at 9:28)
Nina Hoffmann signed a contract with the Syndicate for next year, and Marshy will be her mechanic.

wallheater (Aug 16, 2020 at 10:00)
@jclnv: you might well be right, but I'd heard that he'd been snapped up by Laura Ashley to design some delightful vintage 'Concorde' floral dresses. Either way, exciting times ahead!

madmon (Aug 16, 2020 at 7:09)
damb It's hard to face the fact that the G>O>A>T> is coming to his career's end. Depressing but celebratory in every way.
Massive respect Marshy

Rubberelli (Aug 16, 2020 at 8:33)
Every season, at least since Marshy came on board, the talks of GOAT finally reaching his career end hits the threads of PB and yet every season after, he racks up podiums/wins.

Fifty50Grip (Aug 16, 2020 at 10:26)
Marshy seams really cool met him at Snow Shoe, I guess after 8 years of traveling around the World of hard race life, Marshy may need a long rest from it.

Shartriloquist (Aug 16, 2020 at 8:21)
Very curious as the the behind the scenes reasons and motivations for this?? Does anyone have any insight here?

seadog275 (Aug 16, 2020 at 8:56)
Could be anything really, maybe marshy has had enough travelling the world wrenching especially with the current climate on global travelling? maybe his marsh guard business and any other ventures have paid off enough he doesn't actually need to work anymore.

jaame (Aug 16, 2020 at 9:32) (Below Threshold)
@seadog275: maybe a Rossi:Burgess situation? Marshy told Greg he’s racing for podiums, not wins. Greg wants someone who believes he’s still go what it takes to compete for wins. End of partnership.