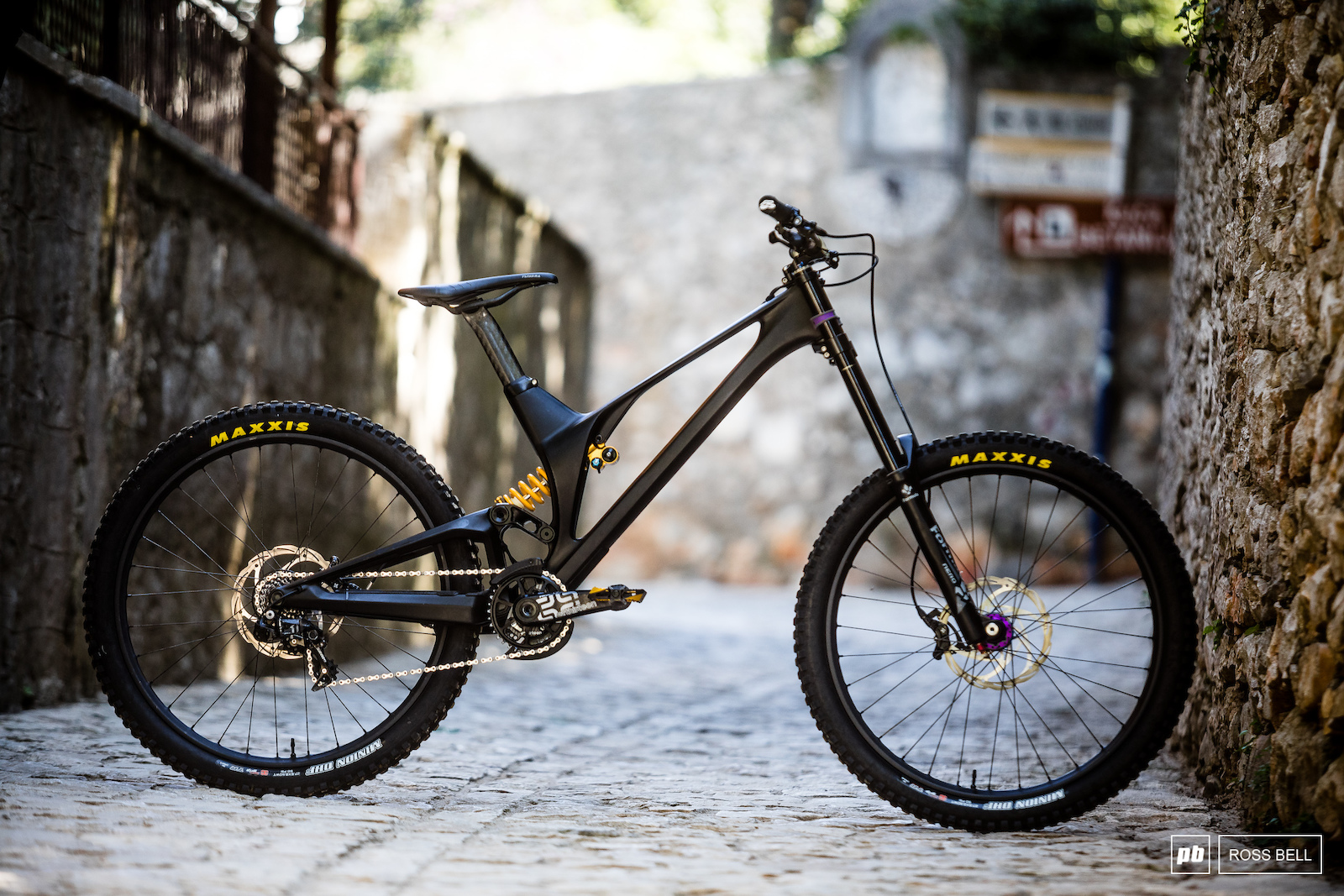 BIKE CHECK
Greg Williamson's
UNNO Ever
Photography by Ross Bell
Coming off one of his best seasons to date, Scottish rider Greg Williamson has matured from lanky-legged junior to a full-on top-20 World Cup contender on any weekend. Scoring his best 2017 result at Val di Sole (12th place), we're sure that Greg is as hungry as ever. For 2018, Greg is riding for boutique Spanish brand, UNNO, the brainchild of ex-World Cup racer and mountain bike legend Cesar Rojo. Greg has made the move from Cube to ride for the Spanish brand and if his previous year's racing performances are anything to go by, we're sure you'll be seeing a lot of more Greg in 2018 and beyond.

Greg Williamson's UNNO Ever is a thing of beauty. The entirely carbon fibre frame is enough to make even the carbon-sceptical people go weak at the knees. Although the Ever only comes in one size, it sounds like Greg lucked out and is already comfortable with Cesar Rojo's DH creation without needing to adjust stem lengths or offset headsets. Greg's mainly been playing around with bar heights and fork crowns to help tailor the bike's feel to his needs. Greg has been seriously impressed with a Formula's Nero fork and thinks that we'll be seeing a lot more people running the three-chamber air fork in the future. 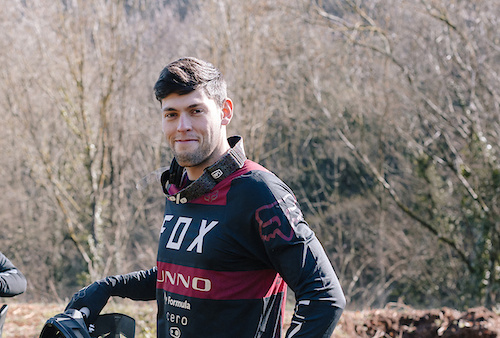 Rider Name: Greg Williamson
Age: 25
Hometown: Inverness, Scotland
Height: 6ft, 182.8cm
Weight: 176lb, 80kg
Instagram: @gregwilliamson1
Greg's running the standard alloy version of the popular Renthal Fat Bar because he likes the feel of the thinner-clamped bars rather than the 35mm bar. He isn't running any inserts in his wheels for puncture prevention, and he's been running a standard tubeless tyre and rim setup without issue. That's his plan going forward over the race weekend but he will be adjusting tyre pressures to get the most amount of grip he can. 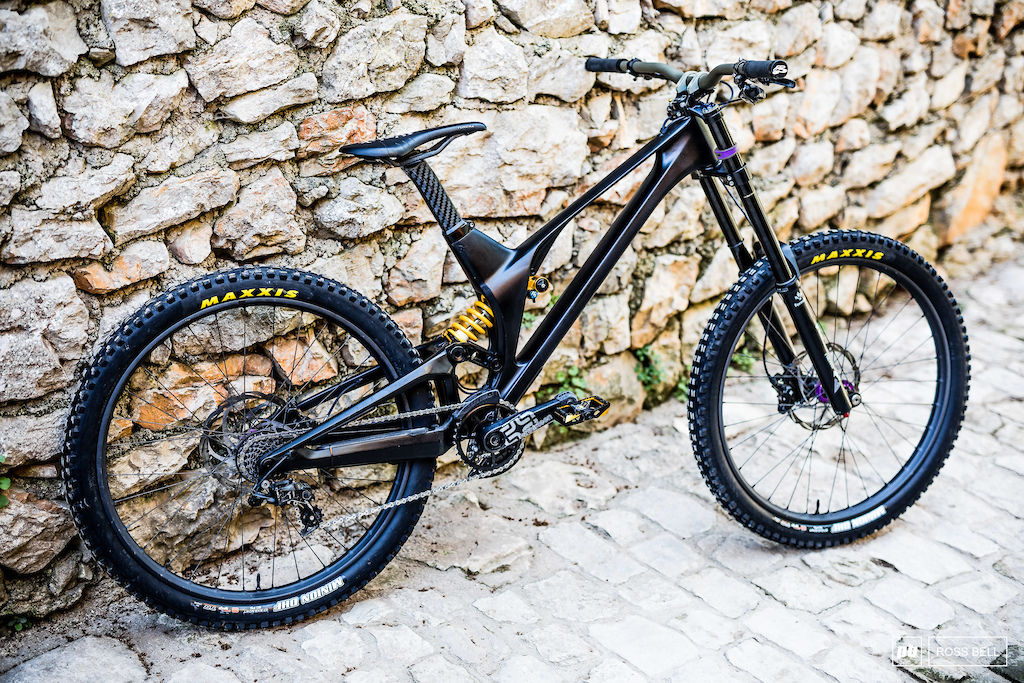 At World Cup number one in Losinj, Greg has chosen to bolt on an Ohlins TTX 22 shock to his Ever. But, UNNO intentionally chose to forego a shock sponsor and Greg thinks he'll probably run different shocks on different tracks. Greg says he prefers air shocks for jumpier tracks and coil shocks for rough tracks like Fort William and Mont-Sainte-Anne. 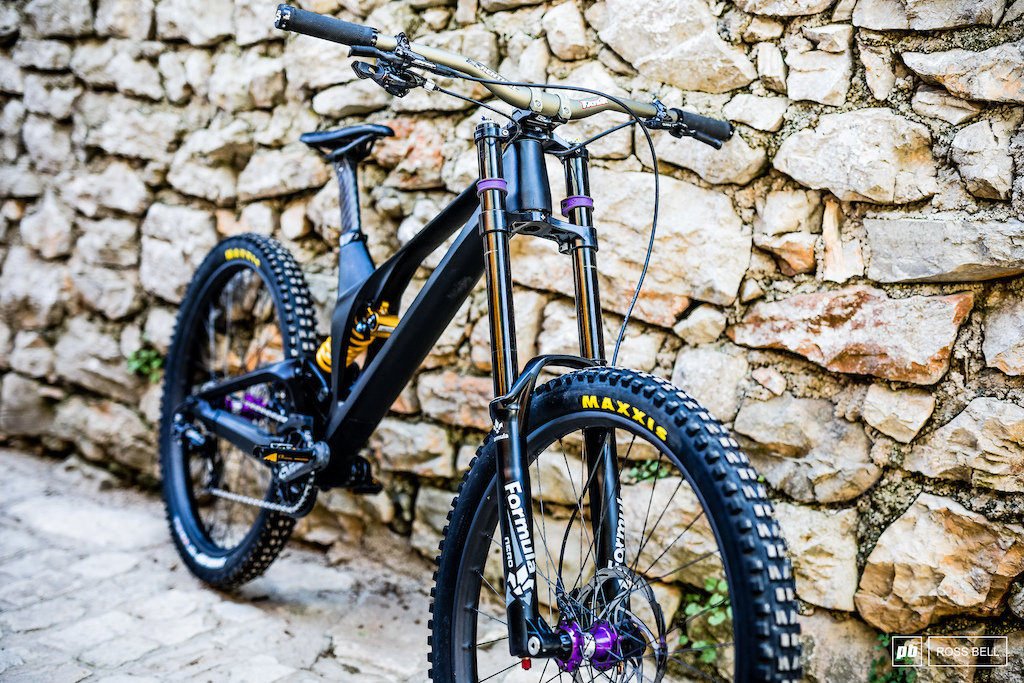 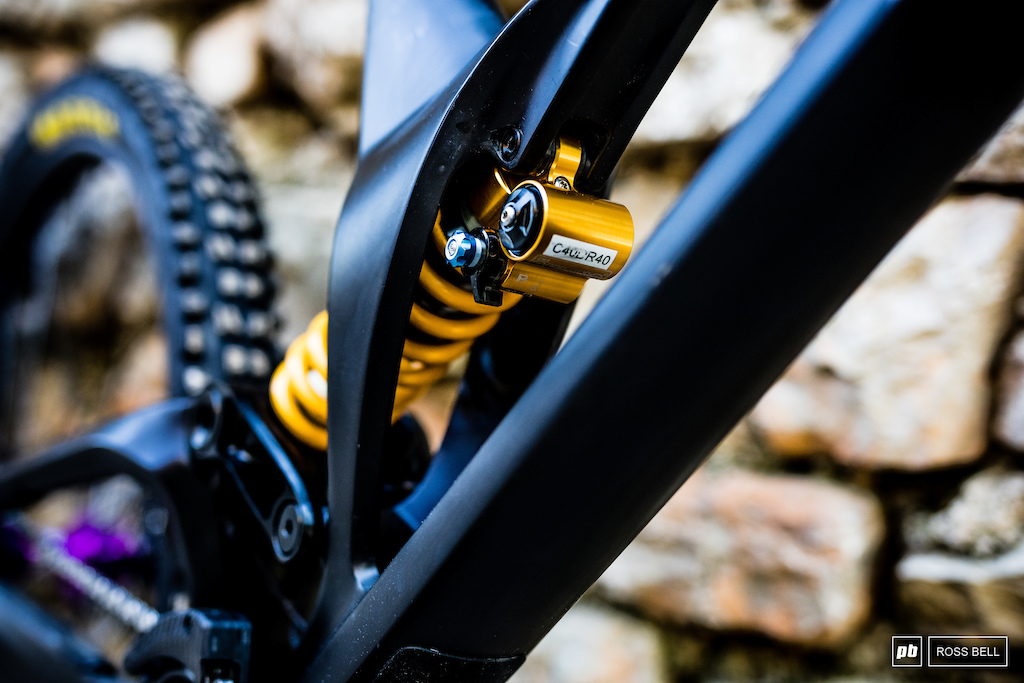 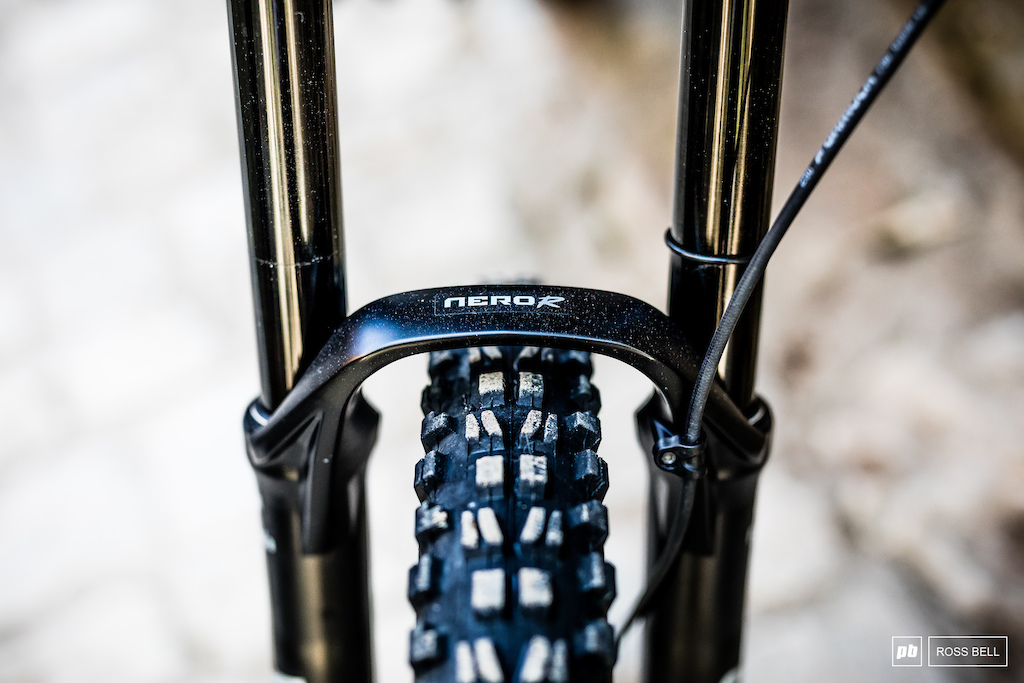 Greg likes his suspension set up to be very supple at the start of the stroke for lots of traction and grip on small bumps, and then with as much ramp up as possible without compromising comfort. Greg's fork pressures vary for each track, which is lucky because the Formula Nero R fork has adjustability. 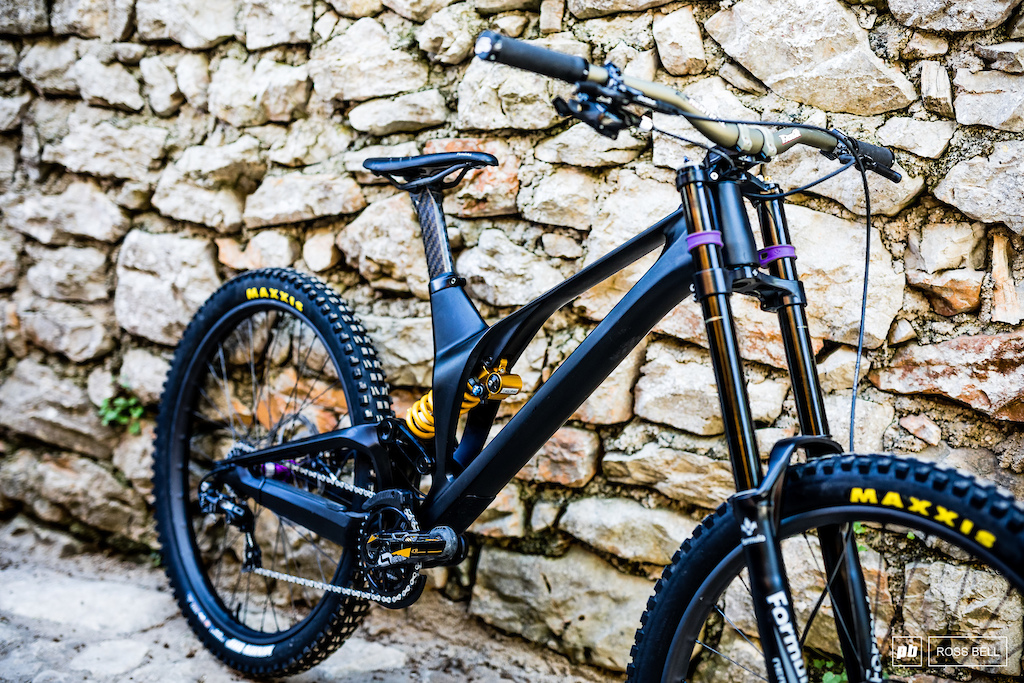 With his setup in general, Greg knows what he wants and likes to keep it within certain limits so that it doesn't get too extreme one way or another. He used to be fussy, but now he's understanding why and the way his bike is set up he's more comfortable with how it rides. Last week he rode a similar track so isn't looking to change much. 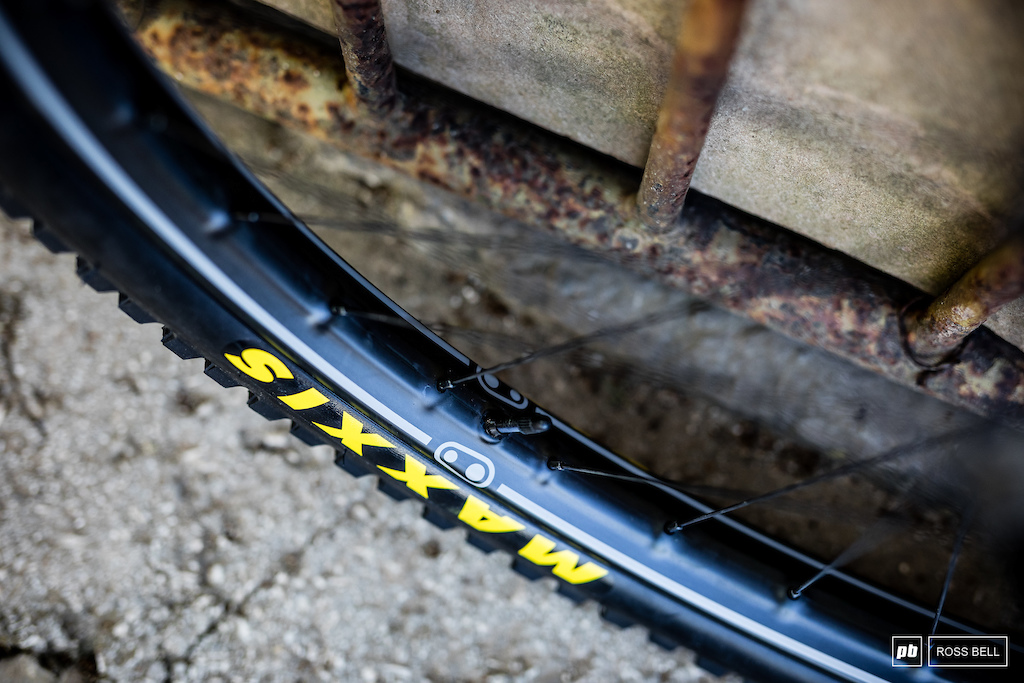 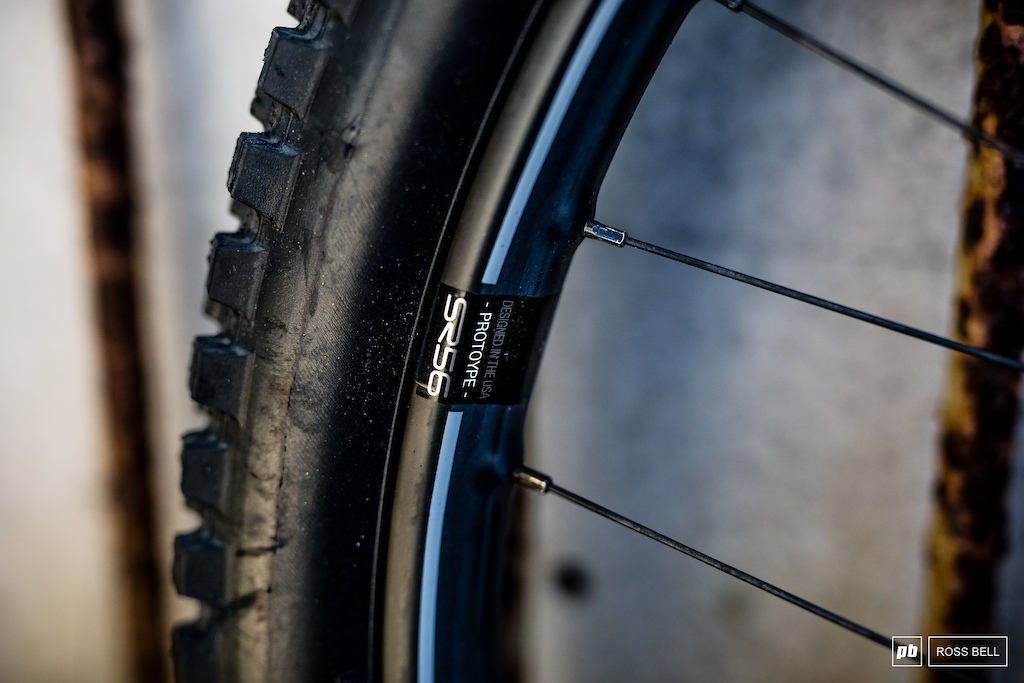 The Crankbrothers wheels are a prototype full-carbon affair and Greg loves them! They're currently unbroken after loads of testing and that's a really big advantage - Greg's certain he doesn't want wheels to be cracking or breaking during race runs. He also commented that they're fast rolling, which could mean they're very light. 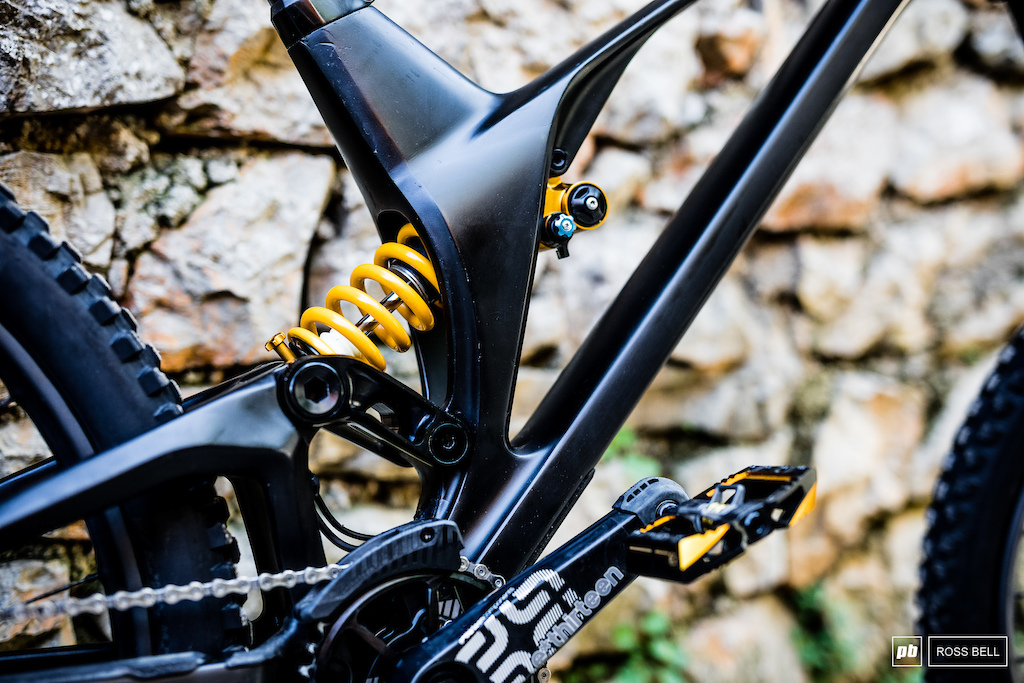 Although Greg isn't fussy about weight, the lighter his bike can be, the better and he says that if it's light it'll accelerate quicker, but heavy bikes can maintain their speed better. The UNNO is approx. 33lbs with some slightly different parts to the ones pictured. 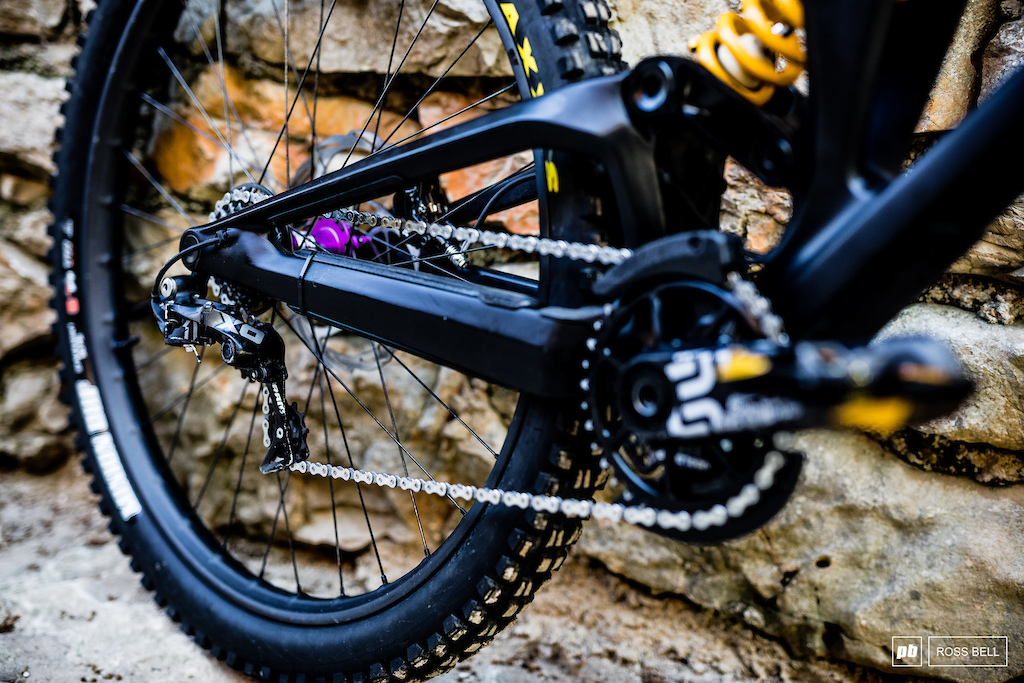 A mix of SRAM and e.thirteen keep Greg pedalling to the finish line. 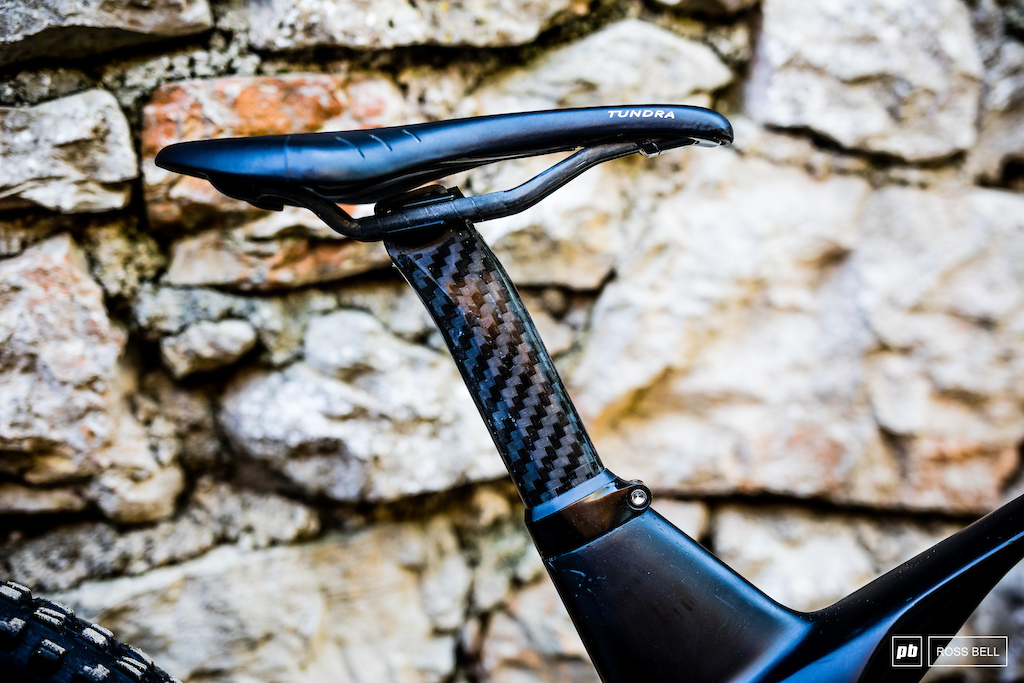 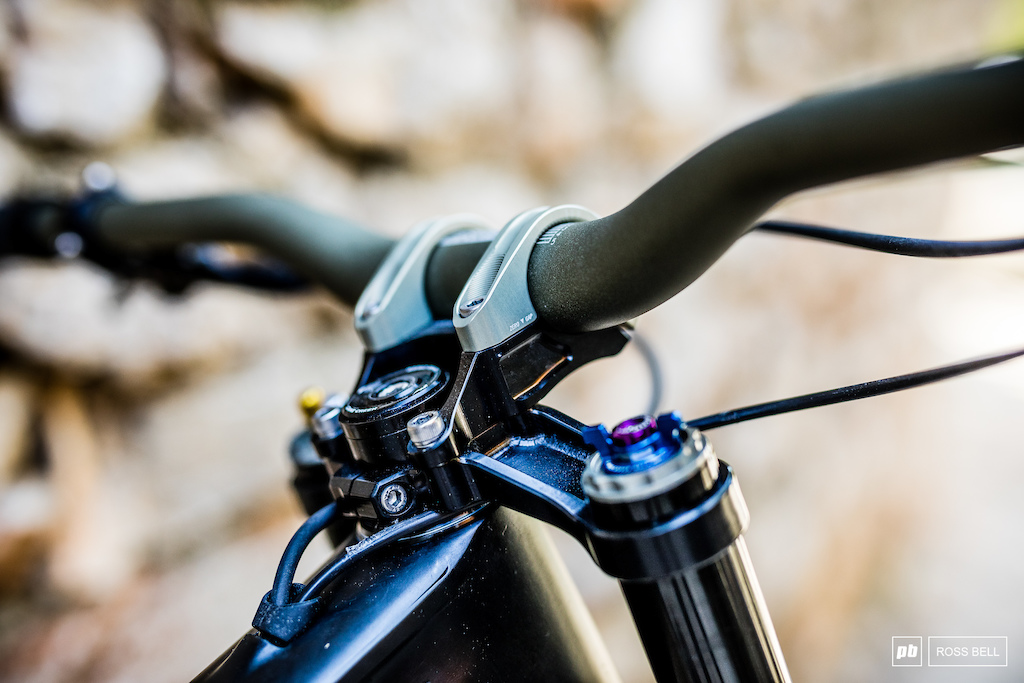 Greg changes his stack height and bar height according to each track. He says that you know when you walk the track what to expect so you can make the relevant adjustments. If you go from Leogang to Vallnord, then the setup is going to change. 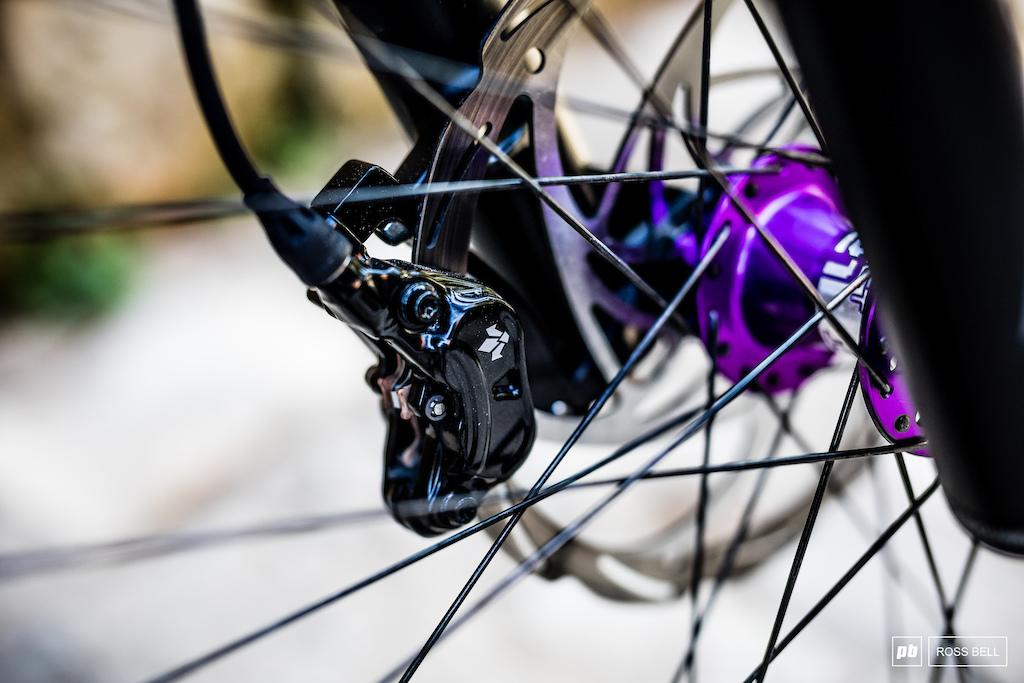 Greg says the Formula Cura 4 brakes and seriously powerful – you could put them on a motorbike! 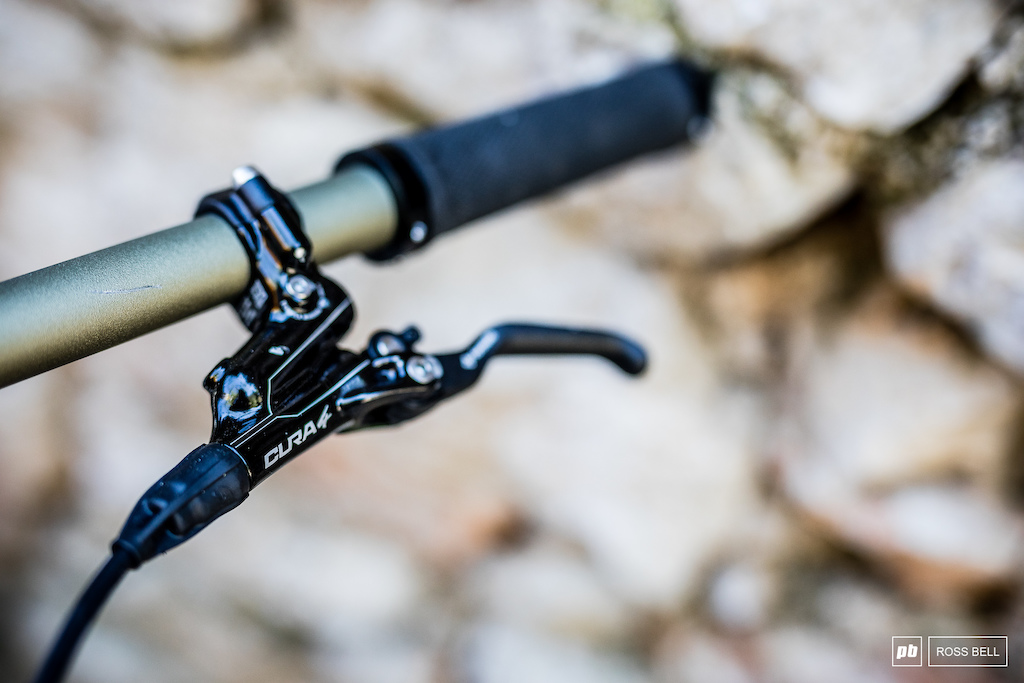 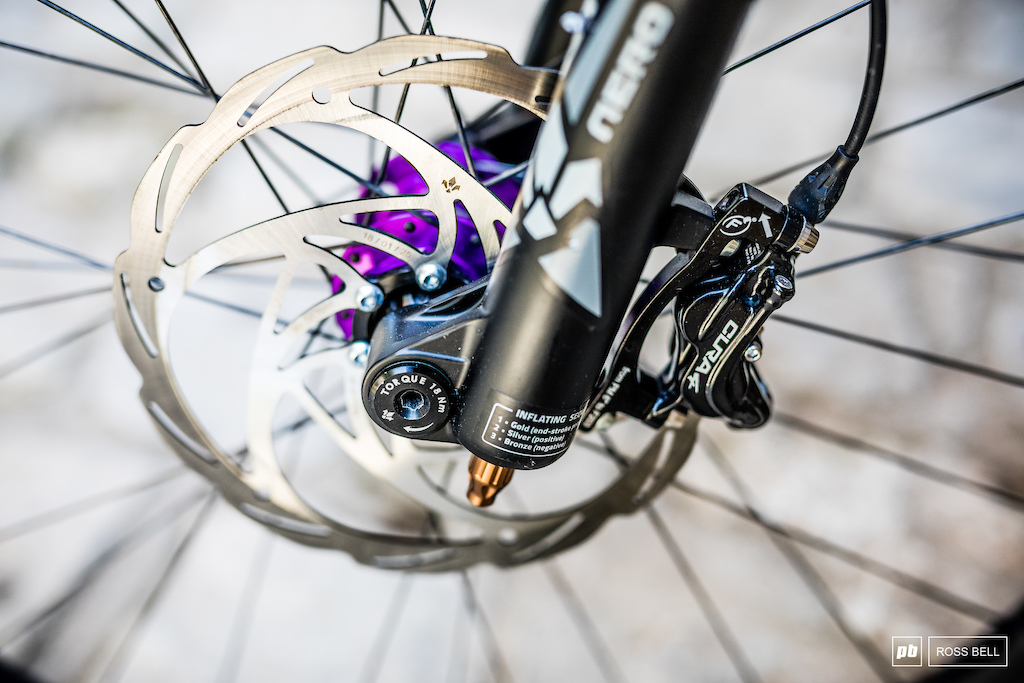 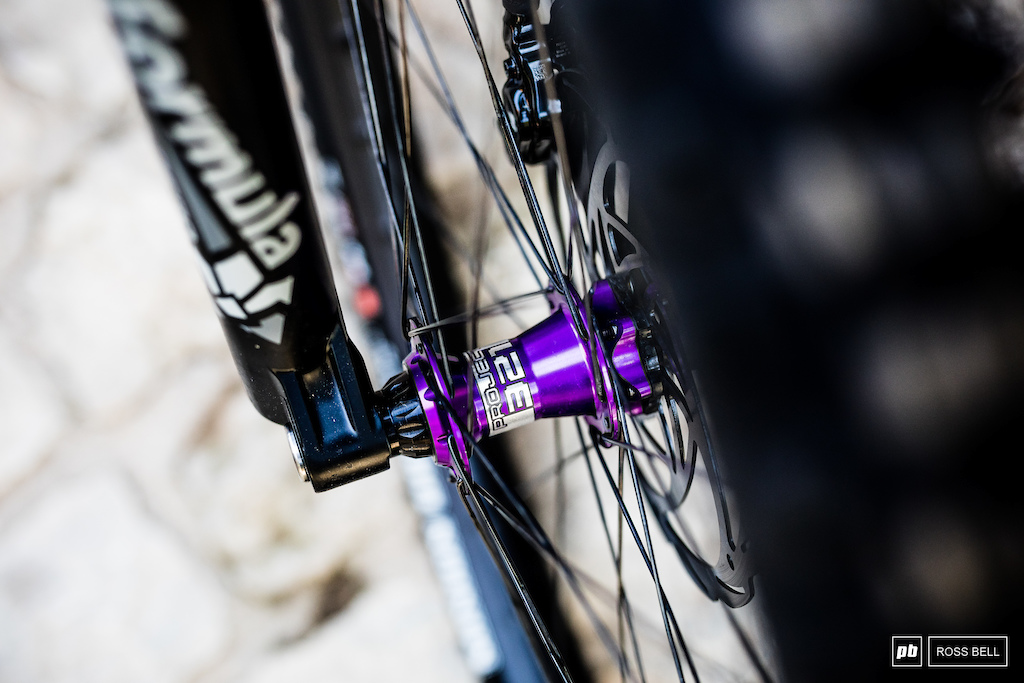 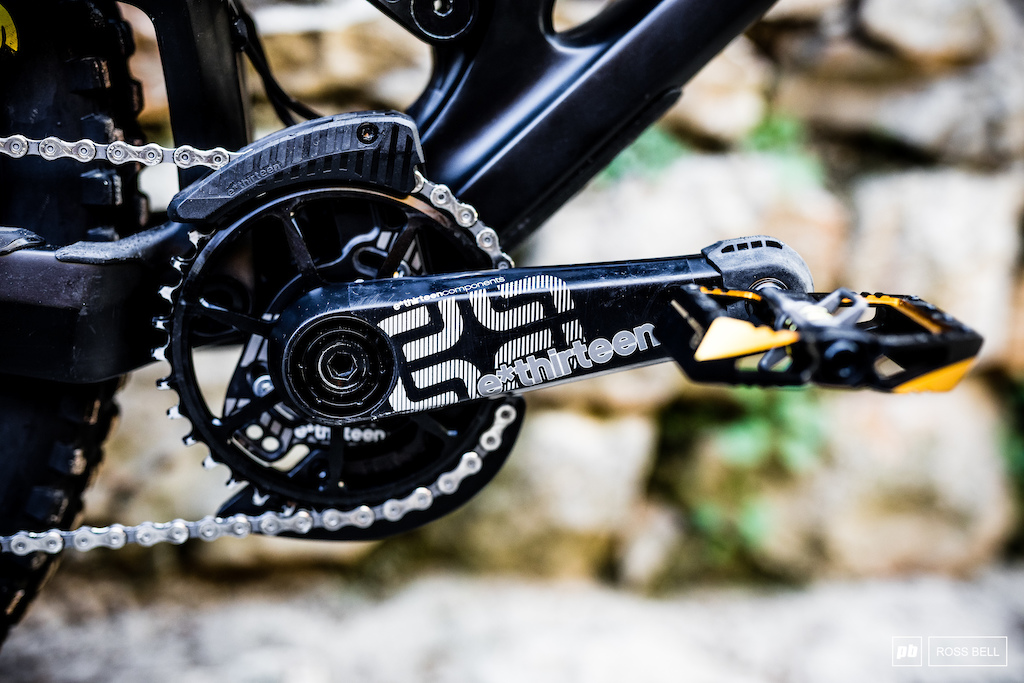 hamncheez (Apr 19, 2018 at 7:15)
So how does this weigh only 3 pounds more than my carbon enduro bike with carbon wheels, carbon cranks, carbon bars, and air suspension at both ends???

jclnv (Apr 19, 2018 at 10:23)
@hamncheez: Because by comparison the raw carbon your bike is made with is junk. This is pretty much the only bike made with high spec UHM carbon sheet.

Imagine what the AM and trail Unno's weigh...

Stumpy2 (Apr 19, 2018 at 7:03)
Those Crank brothers wheels like suspiciously like Bouwmeister wheels. Bike looks awesome and I’ll be making sure to follow this team throughout the World Cup season. Good luck Team Unno.

chillrider199 (Apr 19, 2018 at 8:49)
Thats because the bought that company and all their assets. This includes patents ans designs.

illO (Apr 19, 2018 at 9:06)
'The Crankbrothers wheels are a prototype full-carbon affair and Greg loves them! They're currently unbroken after loads of testing and that's a really big advantage' - Functional wheels a big advantage, no shit!

FuzzyL (Apr 19, 2018 at 9:48)
If he had broken lots of wheels during testing, he would still be on a new - and functional - pair for the race, but he would probably not consider his wheels to be an advantage...

gcrider (Apr 19, 2018 at 9:25) (Below Threshold)
He typoed the typo
should read
"Crapbrokers'
The rims are probably great and his earlier versions got great reviews
CB will f it upsomehow. .like crap spokes ,hubs or both

justwan-naride (Apr 19, 2018 at 9:06)
Bike looks great, but Unno's "one size fits all" sounds dubious to me. I read more like "we won't sell anough of these to justify making sizes, so we made what seems to fit the average rider".

hirvi (Apr 19, 2018 at 15:12)
Well, if you know anything about the brand, you also know they have developed this bike for about four years and just got this one out. More sizes to come, they won't just stretch the mold, slap some moar carbon in there and hope it works..

justwan-naride (Apr 20, 2018 at 14:40)
@hirvi: On one of the first pinkbike presentations of the brand they made it sound like it was indeed a one size fits all concept. I could be wrong as this was some time ago...

macross87 (Apr 19, 2018 at 7:47)
A proof-of-concept bike or bike part is how we have what we ride today. I do feel taken back a little by some of the choices on his rig, but I am really interested in how it performs after these runs.

gonecoastal (Apr 19, 2018 at 10:23)
Formula forks going to get some serious exposure this season. Should run a Storia shock though

barbarosza (Apr 19, 2018 at 8:06)
What is that thing ? Honda days are over since Greg and Brendan split long time ago . I thought we were still talking bikes here . #NasaWontWinMe

redbrickcycles (Apr 19, 2018 at 8:02)
be able to send to Red Brick Cycles in Plymouth Uk for Full Build and Race care and first setup contact fro details We will also all being well have our one for the end of the year

iamamodel (Apr 19, 2018 at 14:42)
@hungrymonkey: but not the goal of the pilot, who isn't allowed to wear skin suits or remove the helmet visor because... fashion + UCI + the MTB clothing industry.
Post a Comment