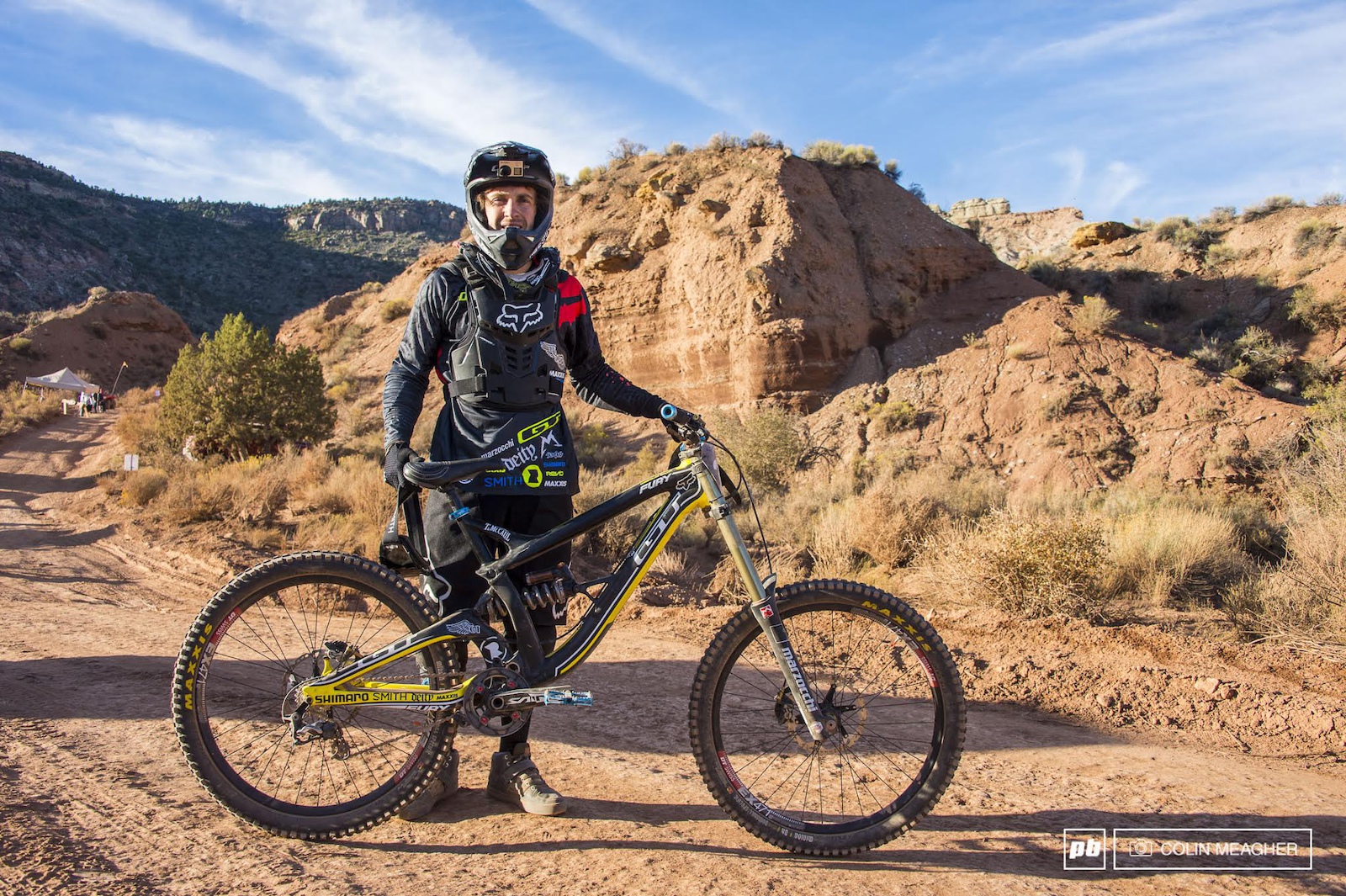 RED BULL
RAMPAGE
TYLER MCCAUL'S GT FURY
Doing any sort of huge drop or jump requires a special kind of courage, but even more so if you're the first rider to attempt it. However, being the first to guinea pig a monster move at Rampage is a whole other level that calls for some serious stones, of which the younger McCaul is obviously in possession of. He was the first rider to roll off the edge of a three-story tall step-down yesterday, a move that he's christened "El Presidente" in homage to his second favorite margarita at Chilis. If that's the case, I'd like to see the drop that's named after his drink of choice.

Tyler is aboard his usual downhill weapon, a medium-sized Fury that's fitted with Marzocchi suspension and that, aside from a few Rampage-specific modifications, is nearly identical to what you'd find him on when he's riding his home trails.

The large majority of competitors at Rampage are running air-sprung suspension, at least up front, but Tyler being sponsored by Marzocchi means that his bike is held up by coil springs at both ends. His 380 C2R2 Titanium fork has a stiffer fork spring installed in place of the 6.5 N/mm coil that comes stock, and Marzocchi has also given the compression valving a re-shim to handle the big moves that McCaul has planned. He also said that he prefers the front of his bike to be a bit stiffer than the rear, but that he isn't the kind of rider who's counting clicks and being overly sensitive to suspension setup, preferring rather just to make some quick changes on the spot and get on with it. 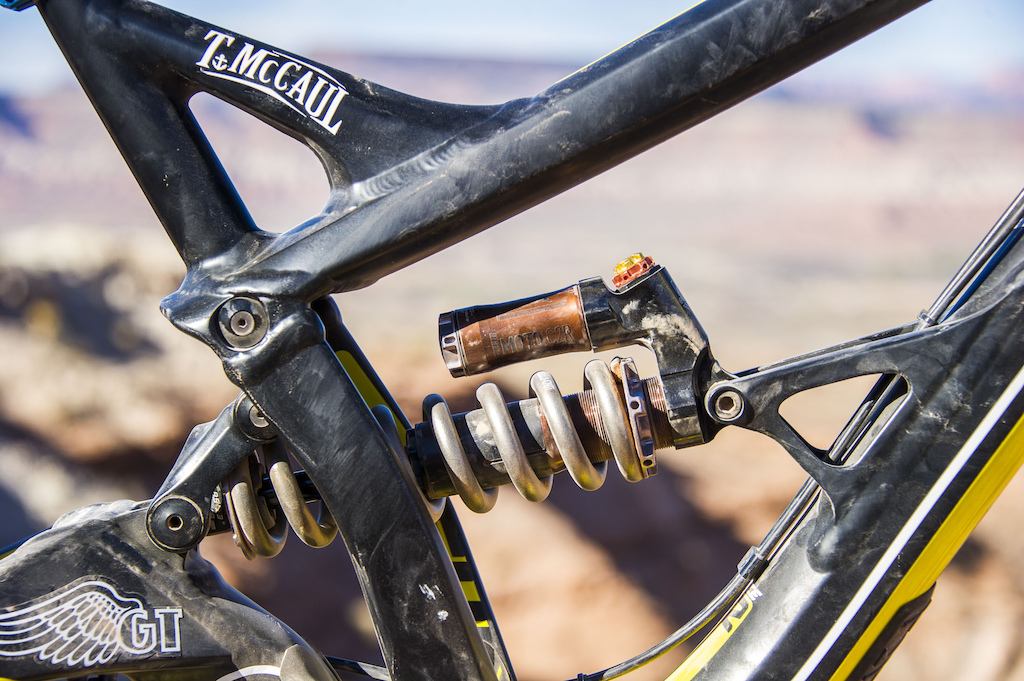 ''Rampage is different in the fact that I pretty much adjust my suspension on the spot during practice to whatever feels right,'' he said. ''I never know how many clicks in or out most of the time, I just know when it's right.'' He did say that he prefers a slightly slower rebound setting for Rampage, though, which is a change that most of the competitors are going with due to the control it can provide when landing from a huge height. 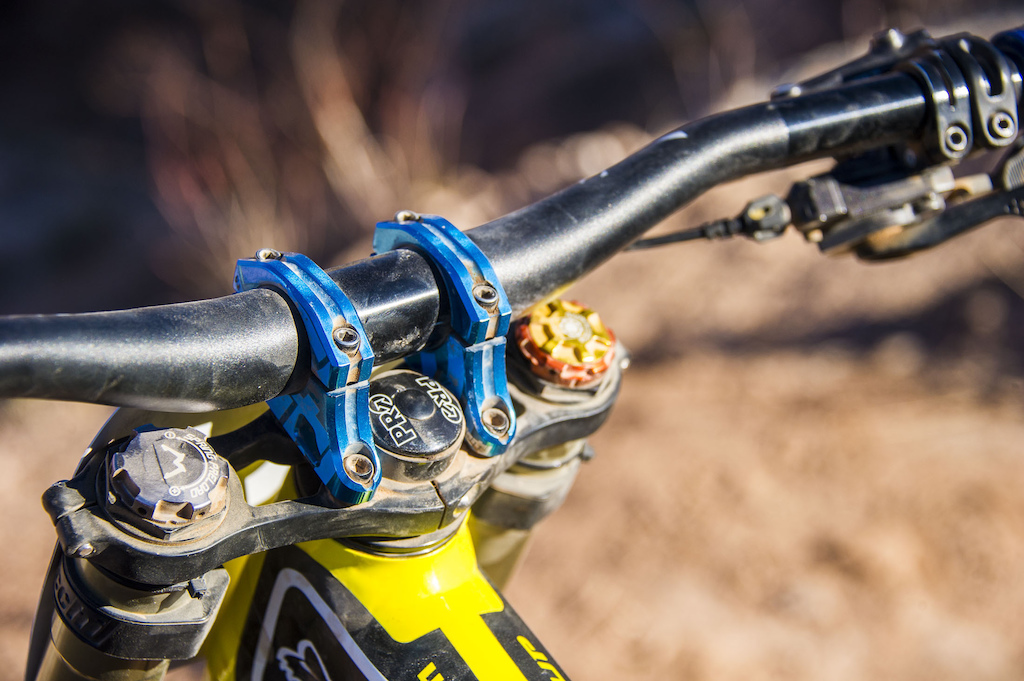 The Fury's long reach is designed to work best with a short stem. 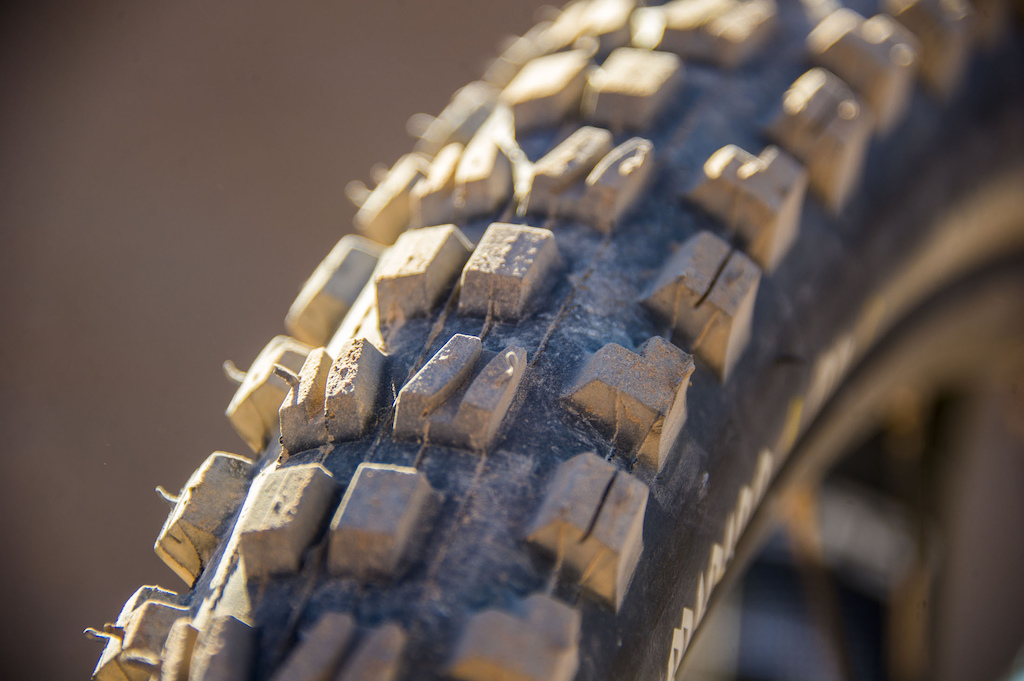 The Fury was designed around a shorter stem than the 50mm length that's still common on the front of many bikes, with the GT's long top tube working best with a stem in the 30mm range. Tyler is using Deity's Micro Direct Mount Stem and a 30.5'' wide Blacklabel handlebar with 25mm rise of rise, both of which being what he'd usually use anywhere else - no special cockpit changes for Rampage. However, one thing that is out of the norm is his tire setup. ''I've been using the 2.7's for Rampage for a few years now after Strait and Zink opened my eyes to how much better bigger tires work out here in this terrain,'' he said of his 26'' Maxxis Minion DHF rubber that's larger than the 2.5" wide tires that would normally be on his bike.

Like a lot of riders at Rampage, Tyler has gone with regular tubes, likely to avoid burping a tubeless setup on a hard landing. ''Air pressure is higher than I normally would use for riding DH trails but less than I'd run for something like Fest,'' he explained, going on to say that 30 PSI up front and 32 PSI out back feels just right. The relatively smooth terrain and extremely high speeds at a Fest event call for high air pressure, but riders are searching for more traction and forgiveness in the Utah desert.

ryanroberts (Oct 15, 2015 at 18:19)
Same! Strange to see folks out there in less than a neck brace and body armor. Massive stuff necessitates proper protection.

rickaybobbay (Oct 15, 2015 at 15:41)
still say all bike companies should have pictures of their bikes dusty available on their websites.

slayerdegnar (Oct 15, 2015 at 13:13)
Another 26er?? Starting to see a real "trend" among the professional riders here...You would think the bike industry would support the pros who push the sport, not just racers and marketing BS.

rickaybobbay (Oct 15, 2015 at 15:41)
he has a baby hahaha. he's a family man and is taking the safer smarter route but still involved very closely to the sport, he still rides, he just doesn't compete

martis (Oct 15, 2015 at 22:22)
She's a 2014. HMMMM. It's actually awesome to see the real deal guys choosing 26" bikes. I can't imagine that GT (who am I kidding... Dorel Industries) is going to be too stoked about this choice, though. Rampage is prime time to get your baller-ass new stuff in front of the masses on NBC, Youtube, wherever... and TMac rolls up on a two-year old bike with "dead technology". Props to him, though. He's going to take a VERY serious run at the top step of the podium with that drop of his.

ibishreddin (Oct 15, 2015 at 15:01)
Is there a reason for not using a chainguide at rampage? I don't understand why some of the competitors arent using a guide.

fartymarty (Oct 16, 2015 at 3:10)
I was being slightly sarcastic... 26 will live, we just need to ditch this stupid PLUS marketing bullshit and call tyres what they are