Join Pinkbike  Login
GT's enduro racers spent most of last season aboard the 150mm travel Force platform, although both Dan and their young phenom Martin Maes did spend time on a prototype machine that appeared to be a pint sized version of the 200mm travel Fury downhill bike. We showed you that early prototype just prior to last year's inaugural Enduro World Series stop in Punta Ala, Italy, but the blacked out bike was clearly in the early development stages and the Force seemed to still be the go-to bike for most events. It would have been easy to assume that would continue in 2014, but GT dropped a teaser video of their new 650B wheeled Sanction just a few days ago, and it's clear that it is the production version of the prototype that we saw early last season. 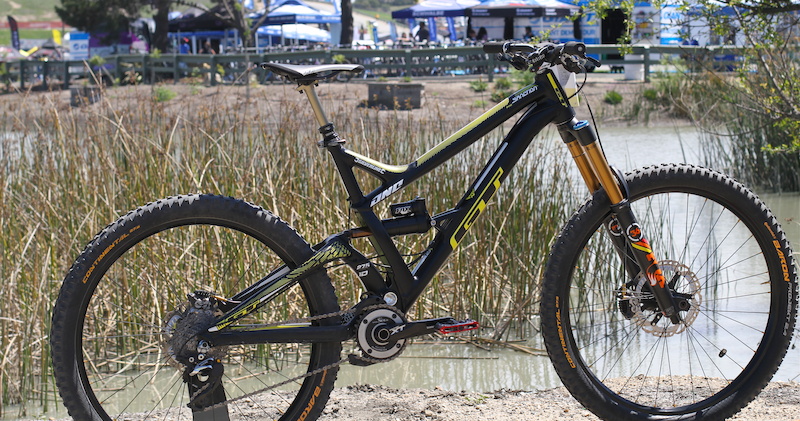 It's no coincidence that the 165mm travel Sanction closely resembles the company's critically acclaimed Fury DH bike, albeit with 55mm of its travel removed, as the engineers behind the new bike set out to create exactly that. The Sanction is intended as a full-out Enduro World Series race bike, which means that while it still needs to pedal acceptably well, the emphasis is really on tackling serious terrain at speed. GT has applied the same geometry principles that make the Fury such a badass in such places: a long front-center combined with a short, 30mm stem and a wheelbase that provides stability when things get rowdy. Despite the similar appearance, they have invested in an entirely new tubeset for the Sanction that is made from 6069 aluminum that allows for thinner tubes and therefore, a lighter weight frame than the 6061 aluminum used to create the Fury. Total frame weight sits at a claimed 5.9lbs, which is about two pounds less than the Fury. 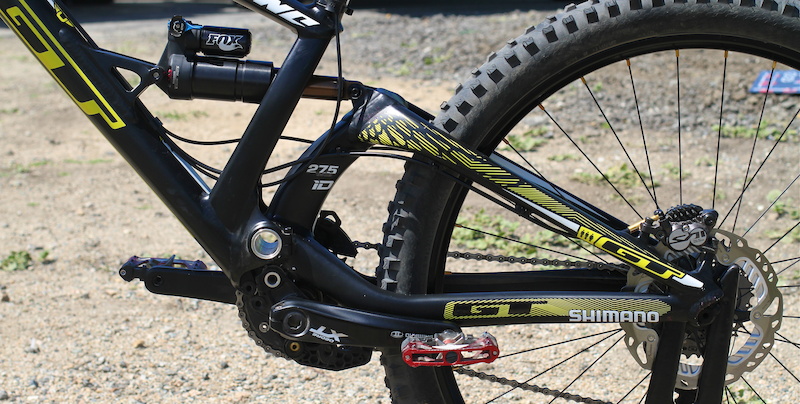 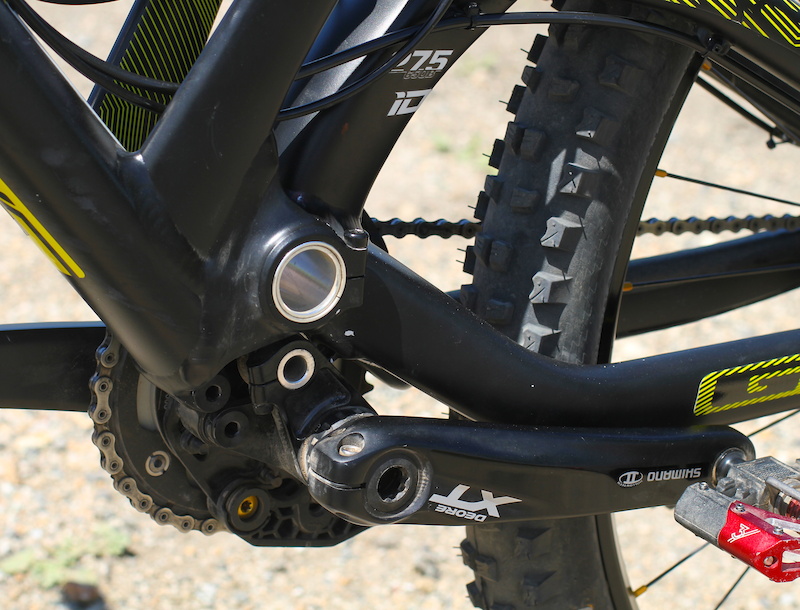 The Sanction's rear suspension design takes after the Fury rather than the high main pivot layout found on the Force, a choice that should clue you in to how active the bike is intended to be when under pedalling loads, and an inspection of the nearly hidden floating bottom bracket and linkage underneath the frame reveals much of the same. It isn't actually a carbon copy of the Fury's setup, though, as the pivot locations and components are quite different, save the dogbone connecting link. These differences are purely down to GT wanting the bike to accelerate better under loads than the Fury, but still offer a much more active setup than the Force ever could. The bike's main pivot has also been positioned with this in mind.

Maes is fast enough to earn a spot on FOX's Racing Applications Development roster, thereby giving him access to all sorts of trick suspension bits that the consumer might not see for some time, or maybe not at all. The front of his bike is equipped with the recently released 36 RC2 fork in 650B, 160mm travel flavour, and finished off with a retro sticker kit. We'll have more on the new 36 soon, but Maes' production spec version features a redesigned air spring system and valving changes that is said to offer up better small bump compliance and improved traction. 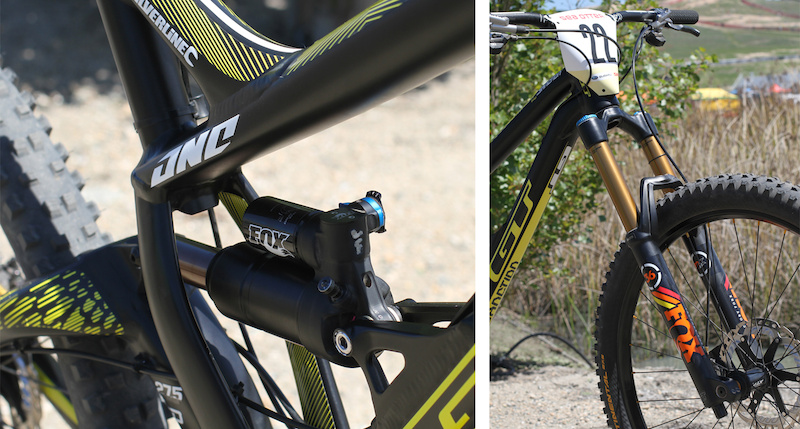 The de-stickered Float X shock on the other end of the bike clearly has some RAD-ness applied to it, with its air can appearing to be of a larger volume than we've seen before. Pushing on the back of the bike reveals an extremely supple initial entry into its travel, enough so that we might guess that it's coil sprung rather than air sprung in a blind test. There's no word on any internal changes to the valving or efforts to reduce friction, but it's a safe bet to assume that it sports some very not-off-the-shelf parts within.

A 35mm PRO Atherton Star Series stem is used to compensate for the Sanction's long top tube, with Maes also running a handlebar and lock-on grips from the same sponsor. See that Shimano shifter on the left side of the bar? It actually doesn't have anything to do with gearing, but rather seat post height. Martin has chopped off the release trigger and rigged it up to control his FOX D.O.S.S. seat post via the thumb paddle. The result is an ergonomic setup that is sleek enough to go unnoticed by many riders, although forgoing the stock two trigger D.O.S.S. remote does mean that he has to manually find the middle setting rather than using the stock trigger's smaller inner lever to automatically find it.

ryanroberts (Apr 10, 2014 at 23:26)
GT are really pretty, love the decals and suspension design from an appearance standpoint.

Kristo (Apr 11, 2014 at 1:51) (Below Threshold)
the other new ones are looking alright but this one still looks the same type of fugly to me

ka-brap (Apr 11, 2014 at 4:16)
When this bike was shown as a proto, the Pinkbike crowd vomited all over it:
www.pinkbike.com/news/gt-prototype-enduro-dan-atherton.html

Throw on some yellow prints and *poof* it's suddenly the most amazing bike ever designed.

ReformedRoadie (Apr 11, 2014 at 6:36)
It looks like the proto-type Dan Atherton was riding. Dirt magazine did a brief test and claimed it absolutely ripped.
While the "E" word is over used, and mocked, it is helping put out some sweet bikes.

finnrambo (Apr 10, 2014 at 21:29)
That SRM is awesome! Probably expensive as hell (doubt SRM sponsors him but they might) but still super cool.

finnrambo (Apr 11, 2014 at 9:34)
How did they manage that? SRM is pretty conservative when it comes to sponsorship, they dropped Team Sky. (actually Sky probably dropped them seeing as Stages has more money than SRM)

rhiwfawrdirt (Apr 11, 2014 at 14:26)
maybe srm want to get into mtb and who better to advertise a performance product than atherton racing athertonracing.co.uk/partners

deeeight Plus (Apr 10, 2014 at 21:34)
Someone should tell him to just use a paul's thumbie mounted shimano road bar-end shifter.. run it upside down and poof, slim setup.

jrocksdh (Apr 11, 2014 at 7:45)
Gt is getting with the proper sizing program! (Along with kona, yeti, mondraker..)
Hope they offer frame only option and better colors than white based sensor/force.

jaketinnelly (Apr 10, 2014 at 21:23)
Whats the difference between the force and the sanction? Is the sanction intended for bigger rocks, terrain etc?

betan (Apr 10, 2014 at 22:43)
From what I can see the Force and Sanction has a different shock layout, Force using the AOS suspension and the Sanction having the high almost single pivot type suspension more resembling their Fury downhill bike. The biggest difference I would say would be the geometry of the Sanction and the amount of travel it's built around. I don't think the official numbers are out yet but it definitely looks slacker in head angle plus with more travel means it's more geared toward steep downhill terrain with bigger hits. The Force would likely be more pedal-friendly and agile with it's slightly steeper head angle and less travel, but not as confidence-inspiring on the descents. Although I'm sure it still kicks a$$

js-mountain-biking (Apr 11, 2014 at 2:23)
All I read was thinner tubes and I have now a more horrifying picture in my head than the fury that snapped last year!

specializedtrailblazer (Apr 11, 2014 at 12:11)
How come there not using there new aos technology, looks like last season's bike