Join Pinkbike  Login
50 Comments
Squamish's newest trail is basically a 3km downhill pumptrack. A beginner/intermediate/advanced trail built by Big Red Ted Tempany and a cadre of local volunteers (particularly Steve K, Clark L, Barry M), it was funded by a grant by local and federal Canadian government bodies (more about that in this article. It can also be described as a mini A-Line in the rainforest. It's very progressive of the local authorities in Squamish to support such a trail and a testament to the hard work of the local trail organization (SORCA) and their volunteers who put in countless hours and wrote grant proposals to make this happen.

More details and video inside, 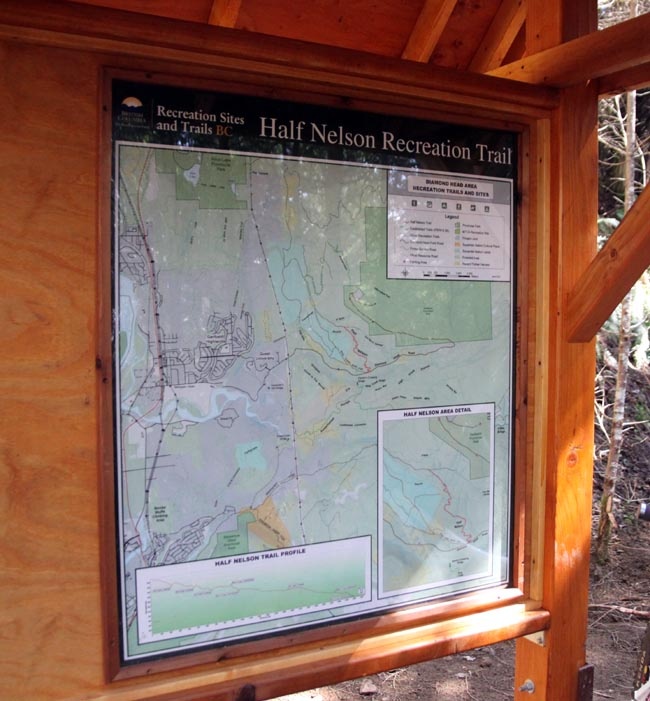 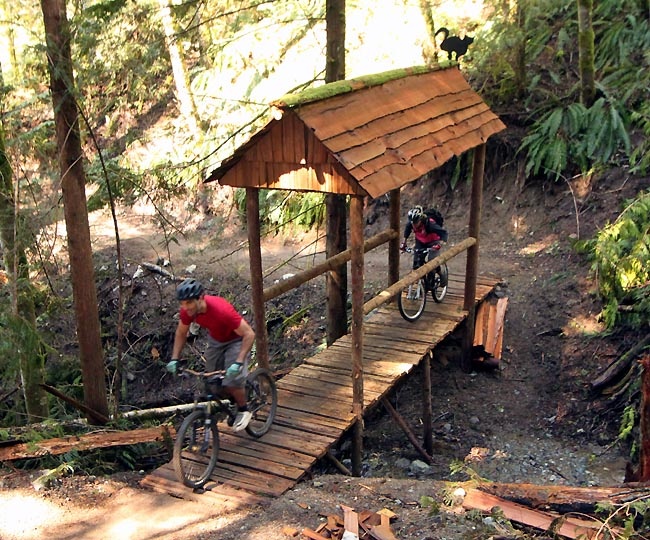 - A feature bridge with some astounding craftsmanship. Picture by Lee Lau - 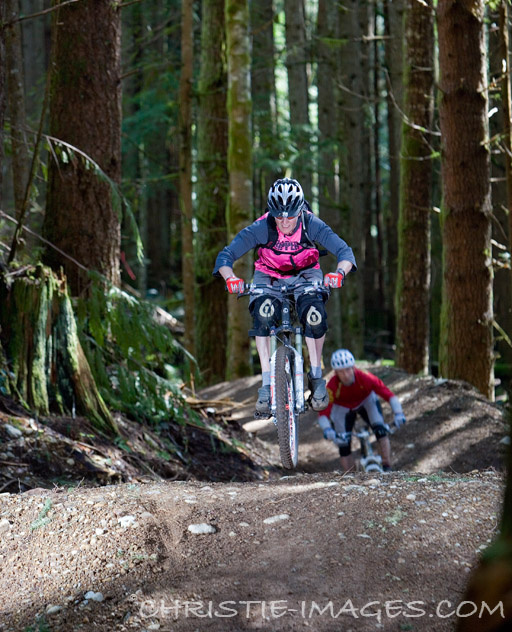 - Sharon on one of the 102 jumps/tabletops. Picture by Chris Christie - 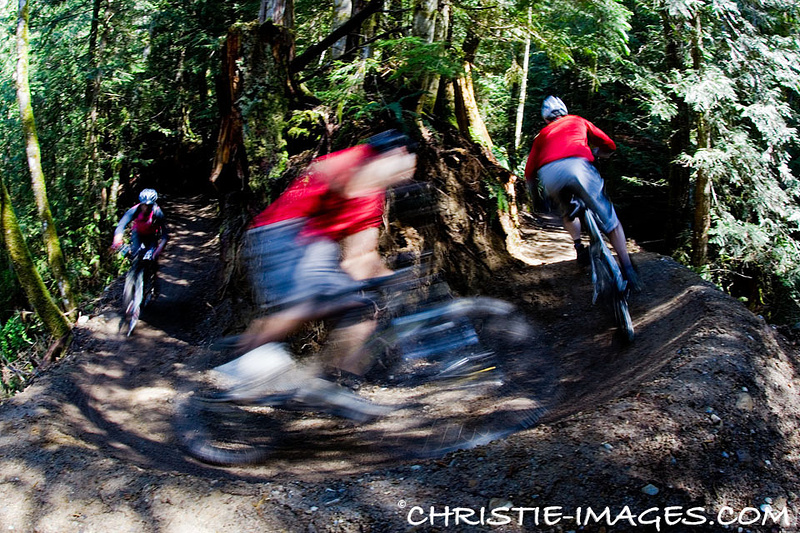 - The group on one of the 68 berms. Picture by Chris Christie -

If you are to look up "flow" in a dictionary, you might see a picture of the Half Nelson trail right by it.

- Located off the Ring Creek FSR in Squamish.

- Takes about 35 minutes to get to the top of the trail from where most people will park.

- 47 drainage features including the use of cedar bridging, bundle bridges, culverts and drain tile.

- 102 jumps/table tops, more if you're fast, less if you're really fast as you might double up the tables!

oilcan (May 6, 2010 at 15:49)
rode this just a little while ago, this is my absolute favourite trail in squamton(though i haven't ridden there that much). One of the best parts about it is the fact that just about every level rider can ride it without being super sketch.
Mega props to Big Red Ted and the other volunteers who helped build this awesome trail. I also think the PB community should realize that this couldn't have happened with out some help from the government, i'm saying this because tons of people bad mouth the district and government for wrecking trails but they also sometimes help us mountain bikers out with the trails.

slyfink (May 6, 2010 at 6:12)
Some buddies and I are headed to Whistler/Squamish in Sept. for some riding. I was agonizing over taking the big bike or the xc bike... (the other guys don't have big bikes) I think this will take the sting out of not riding WBP every day. This looks freakin awesome. This trail could be destined to be one of the greatest all time trails, anywhere, ever! I'm not kidding. Sidewinder in Kingdom Trails has been listed in Bike mag as one of the best ever, Zippity in Fruita too (somehow Kessel run seems oft overlooked). By the looks of this one, it could be right up there with those legendary trails. Kudos to the builder, the volunteers, the city and the Province for doing this. I can hardly wait!

like Sx-Trail or Nomad, Remedy so you don't agonize yourself anymore. You can do both DH and XC in a pretty decent way on one of those. You can't race on top level, but you can have a everyday good fun. At the same time with these bikes it is you who draw the limit, not the bike. All it takes is a good setup with travel adjustable fork and double ring crankset as a foundation.

nishnash (May 6, 2010 at 10:32)
Ridden this trail twice since it opened.....its sick. Super fast and flowy as they stated, need to be good at cornerning! (which im not haha) Super fun...great for all skill levels.
Be careful though, two of the jumps are pretty big!

nishnash (May 6, 2010 at 19:34)
No shuttling! Well you shuttle to the bottom of the trail. The rest is a pretty nice pedal up...one steep section but its fine. Its just a fire-road so no gnar climbing haha...still not shuttleable tho.

leelau (May 6, 2010 at 18:21)
I got to admit I wasn't stoked about the video myself. It was really sunny that day and there were lots of sunny hot spots. It's best to shoot in the shade but sometimes you have to play the hand you were dealt. You'll just have to come and visit and ride the trail to see it for yourself

s-nicol (May 6, 2010 at 18:45)
don't get too excited about this trail. Squamish is an amazing place to ride trails from fast to gnar. This particular trail fits into the bike park category. Everything around this trail is what squamish is made of. Not my fav

saintjimmy (May 6, 2010 at 7:08)
This trail is amazing on a short travel bike, like a Cove Hooker for example. Because you can pump the rollers, and the berms are tight! And it is beautifully built, Big Red Ted did a great job!

bigbigbike (May 6, 2010 at 9:00)
Looks like it needs a little more pump though to be a pump track it looked pretty smooth.

easy (May 7, 2010 at 2:07)
Smotth berm here, smooth berm there, those guys aren't pumping anywhere... and ride like they've shaved their legs just yesterday... sweet trail though...

pudding (May 6, 2010 at 10:28)
Go get a map from Tantalus bike shop before you go up. You can shuttle to the top of Garibaldi Park Rd. and park. if you ride 19th hole or P-nuts wild ride it'll shoot you out on the Ring Creek FSR, just go up it for a little bit and you'll be there. You can shuttle to the trail head on the Ring Creek FSR, but it's better to go from the top and get a longer run.

leelau (May 6, 2010 at 18:23)
It takes about 40 minutes to push or ride up. The shuttle would be brutal and that's why the local trailbuilders and SORCA (the trail association) is trying to discourage it - lots of waterbars and ditches. Some guys were shuttling and their shuttle took as long as the ride/push up (after messing around with the bikes etc)