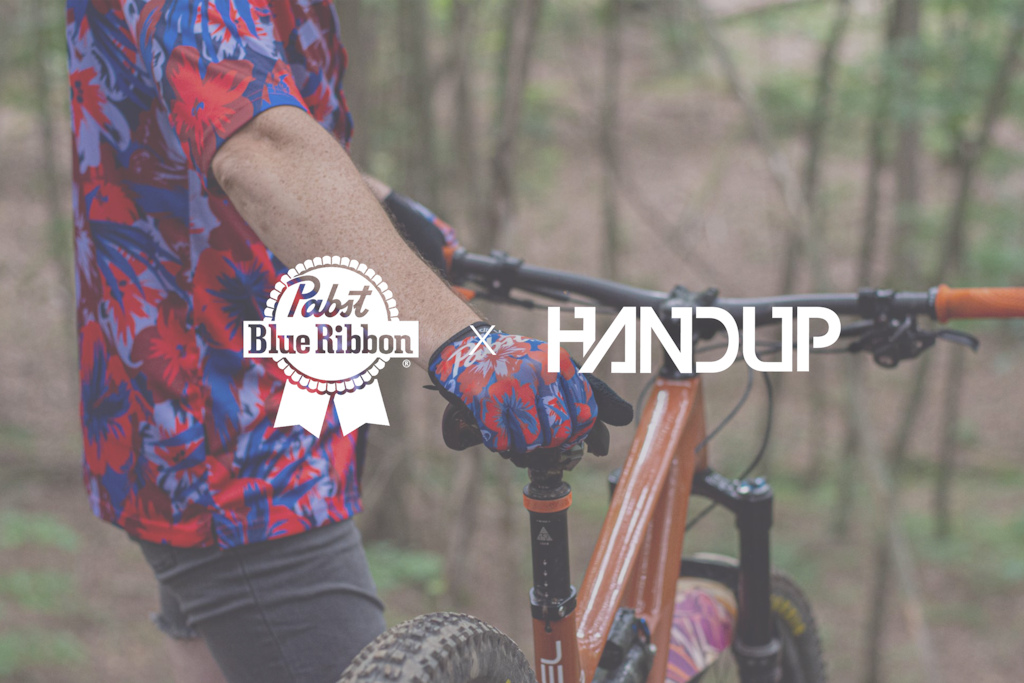 Camaraderie has been at the forefront of our minds since the inception of the brand. For us, that means good times with others, on and off the bike. Pabst Blue Ribbon has been the center of our post-ride parking lot cheers more times than we can count so, we thought it was a match made in heaven to link with them and outfit some rad folks in a complete PBR round-up of gear. You can now rep a classic American cold-one company via Handup Summer Gloves, Most Days Gloves, Button up Jerseys, Standard Jerseys, Socks, bandannas and even a Coozie! 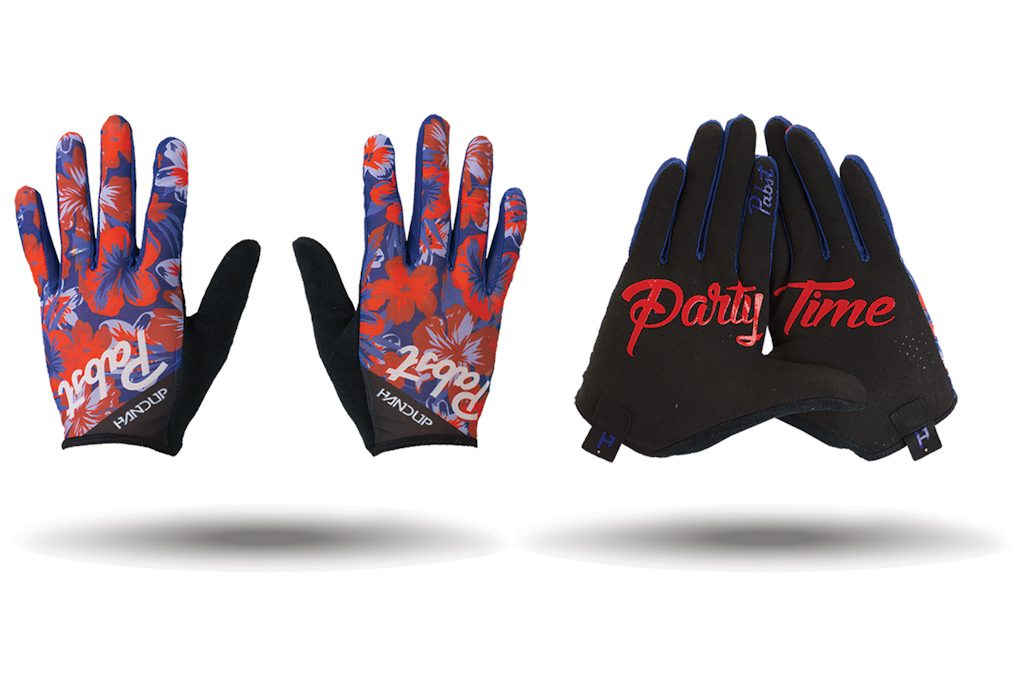 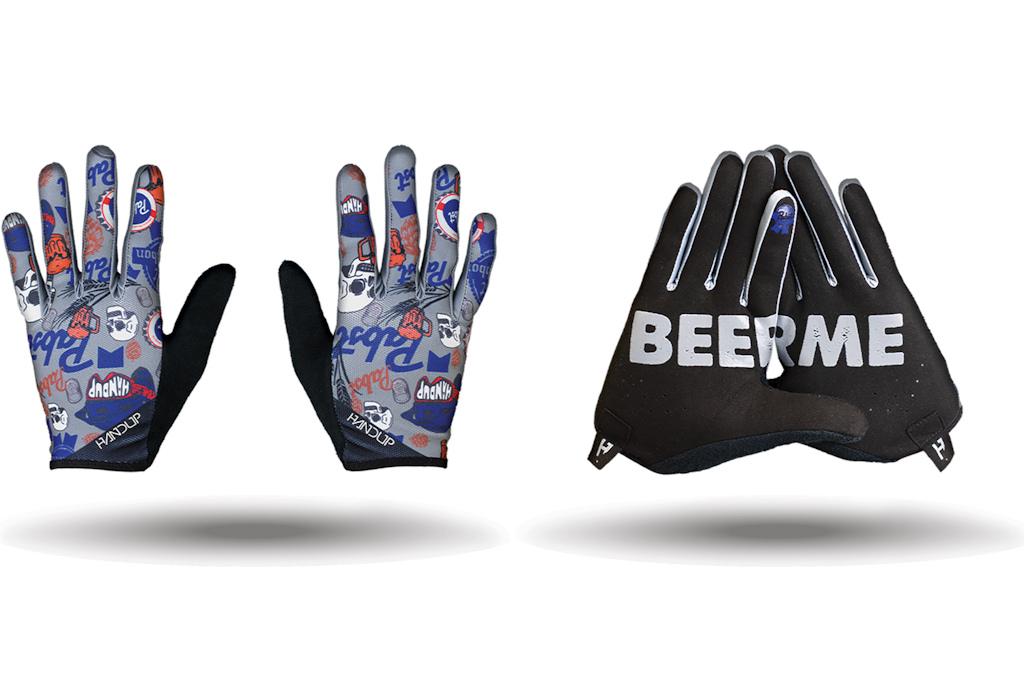 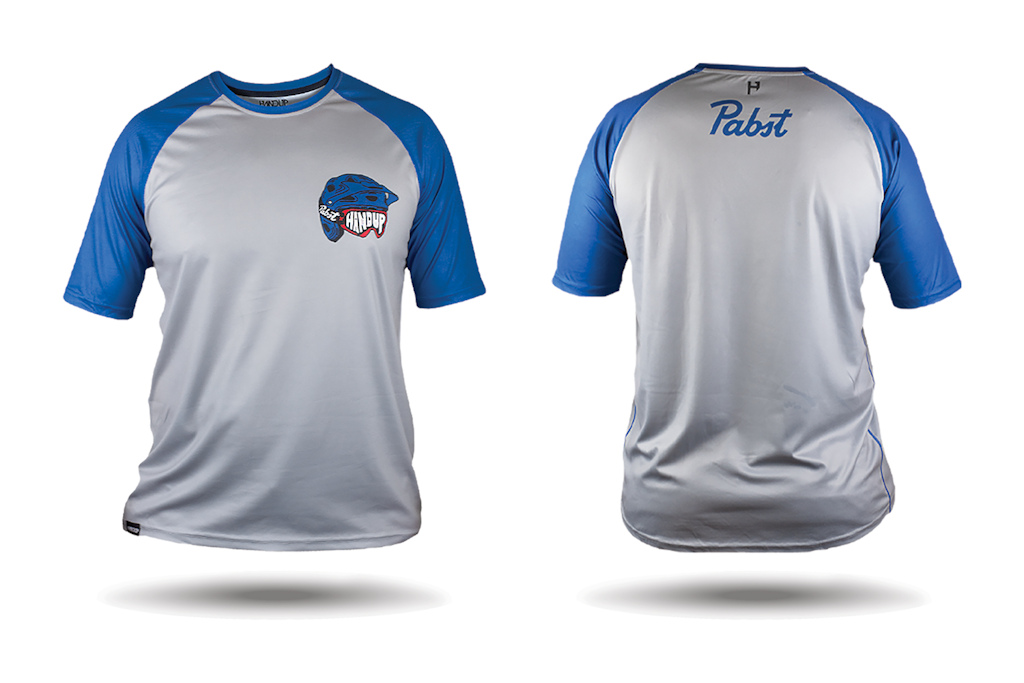 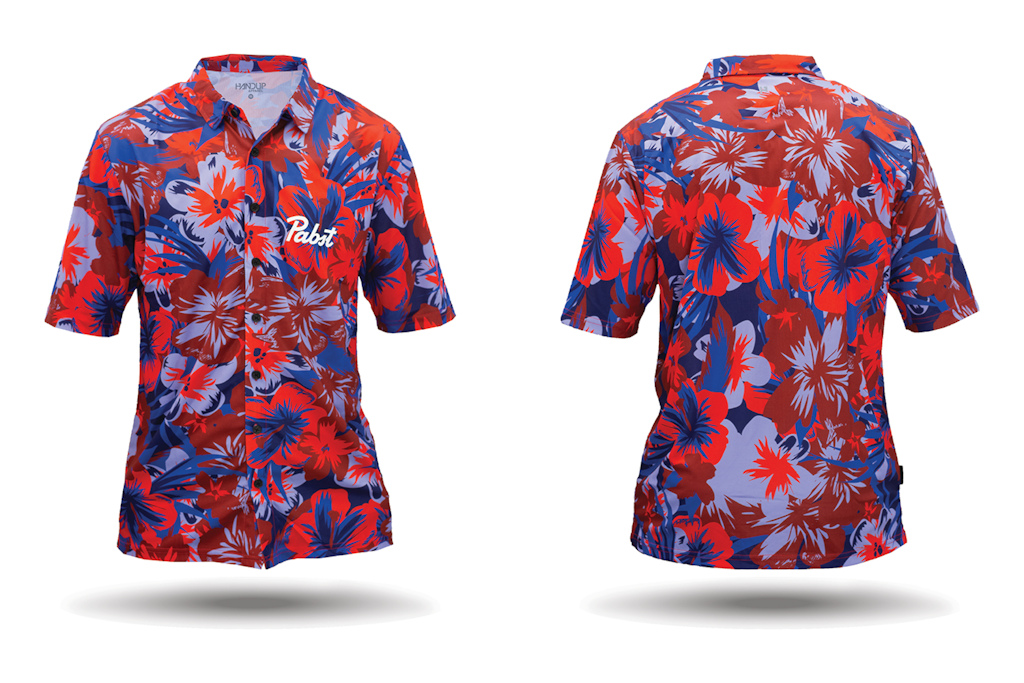 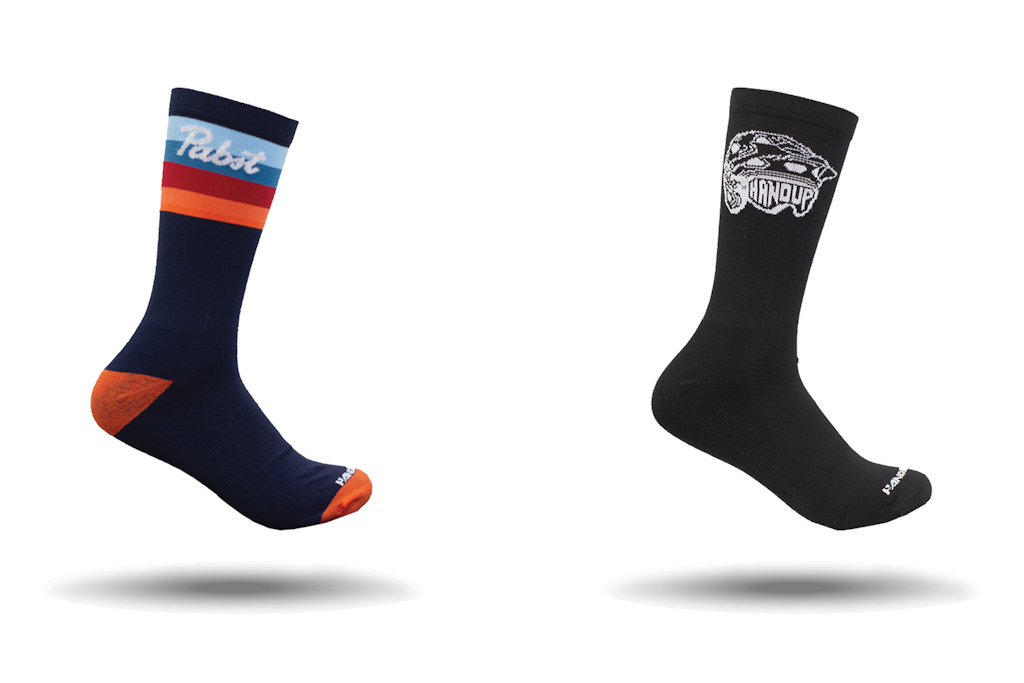 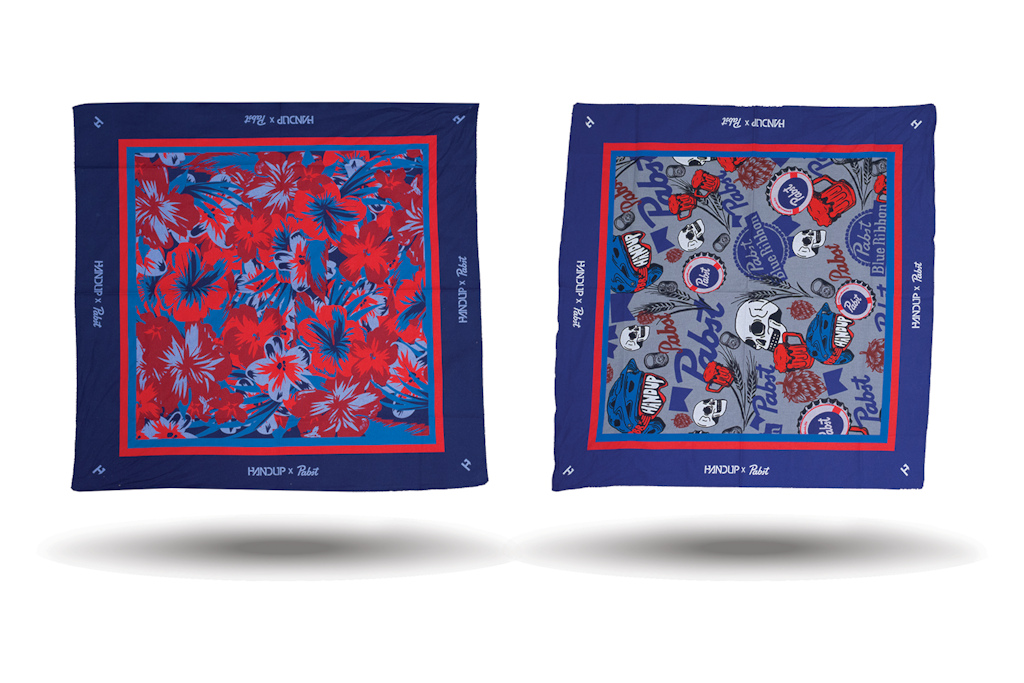 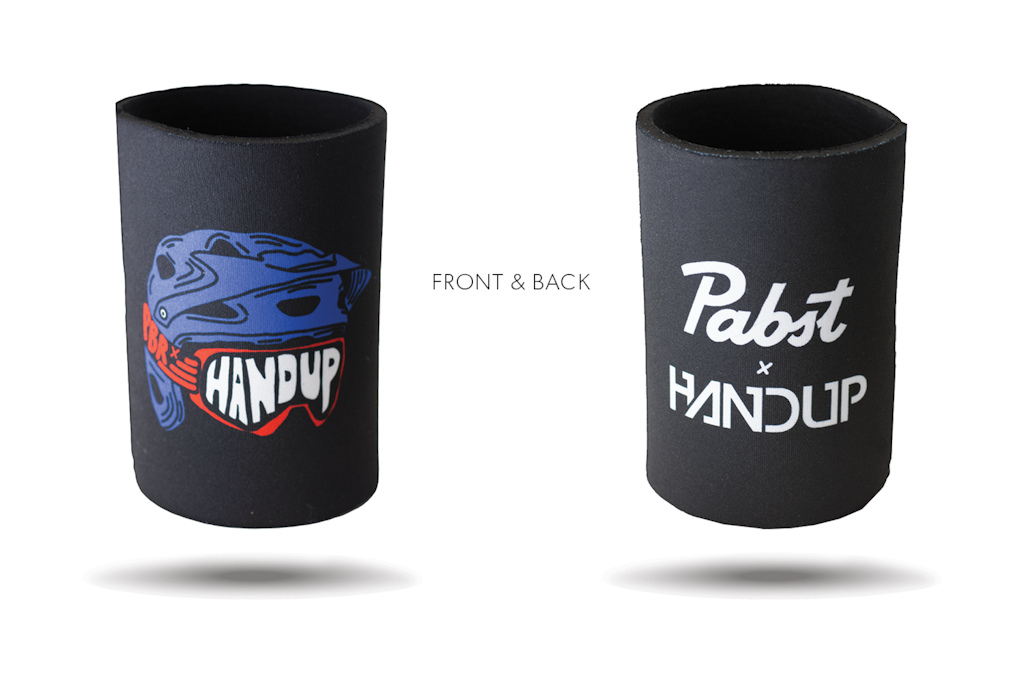 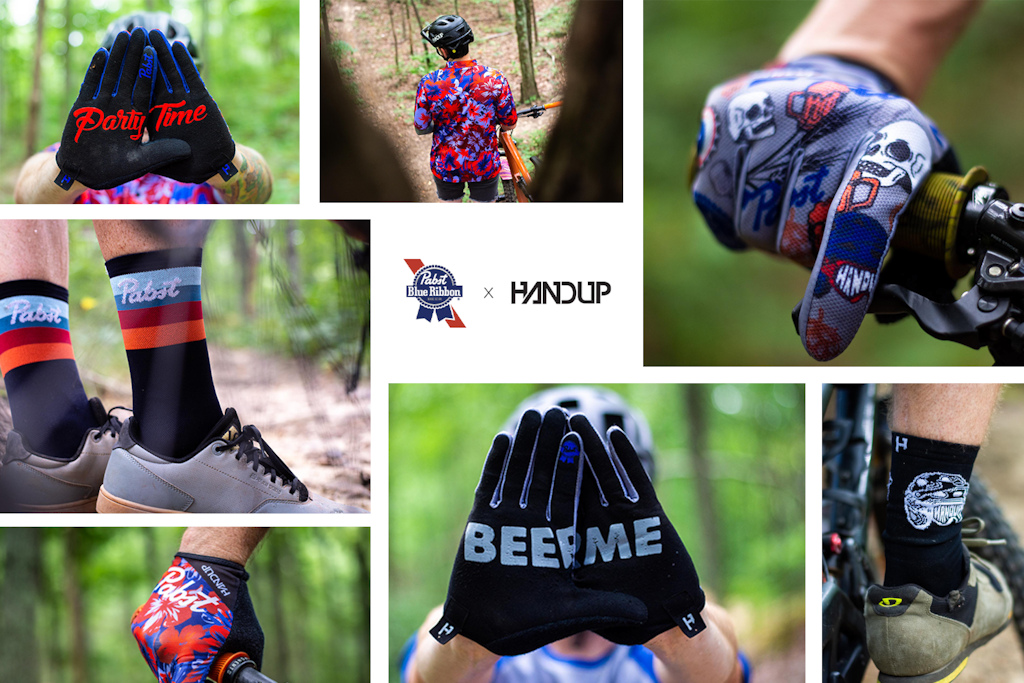 conoat (Aug 6, 2021 at 8:46)
nothing says "crew of joey's skid-schralping berms on a blue trail" quit like hawaiian shirts and a SC Megatower....sigh

dllawson819 (Aug 6, 2021 at 9:33)
Since I can only upvote this once - nothing says "crew of joey's skid-schralping berms on a blue trail" quit like hawaiian shirts and a SC Megatower....sigh"

suspended-flesh (Aug 6, 2021 at 11:25)
@Trudeez: Yep and it was Pabst who killed the Olympia brand just this year! Following beer acquisitions is worse than bike companies.....Pabst owned OE 800 in the 90s and I bought some merch at their Tumwater gift shop along with a giant Oly patch.

"Owned by Pabst Brewing Company and part of the brewery’s portfolio of legacy brands, Olympia Beer has not been brewed in its hometown since 2003. Olympia Beer got its start in 1896 when Leopold Schmidt founded the brewery in Tumwater along the banks of the Deschutes River. Through the years the brewery grew and expanded from its original location that is currently being restored to a new, larger facility that is easily seen along Interstate 5.

Trudeez (Aug 6, 2021 at 13:06)
@suspended-flesh: rumor is that they're going to re-brand Oly as a super premium vodka la-la Belvedere/Ciroc etc. They now own the "Its The Water" phrase and apparently that's something they can successfully market. Sad day as Oly was definitely my favorite cheap canned beer.

mdent (Aug 6, 2021 at 9:01)
I am holding out until Colt45 Malt liquor has some merch to buy! If I am going to represent disgusting beer, I need to get a full buzz in minimal time and a hangover to match! At the best possible price! Plus the Billie Dee Williams commercials are so great. "It works every time!"

Also. I like PBR. It does not taste like Double Brown or any other generic NZ rugby beer.

ReubenSandwich (Aug 8, 2021 at 3:33)
Saw a guy riding yesterday in a Woody kit... Trakky dax and a footy jersey that is. Brand new fox gloves with no poofy helmet of course, and a pack o' Winnie blues in his back pocket.

woody-nz (Aug 8, 2021 at 13:59)
I can’t imagine being this salty that other people drink different beer then you, also rumor has it, Wild Buck beer is actually PBR.

streetkvnt-kvlt (Aug 8, 2021 at 22:46)
@ReubenSandwich: rider of the year right there. I'd prefer a VB riding kit to go with my ute and flannel shirt collection. Yeah VB's Aussie but someone in NZ discontinued the NZ version for the shittest reason(s).

streetkvnt-kvlt (Aug 10, 2021 at 0:20)
@commental: maybe it's the Southern Hemisphere air but I ain't seeing any connection between DB and leather trenchcoat Matrix Keanu. I reckon a proper DB riding kit would be a Swanndri, stubbies and jandals with socks.

streetkvnt-kvlt (Aug 19, 2021 at 19:16)
@commental: haha I remember that one. The ad was at least more entertaining than drinking an averagely average tasting 4% lager.

stonant (Aug 6, 2021 at 10:48)
Only a brand like handup could fail to deliver on a PBR collab…. Everything Is an eyesore despite PBR’s classic color scheme and logos, which they failed to incorporate

uh-no (Aug 6, 2021 at 19:33)
PBR f'n sucks but Handup make the only gloves that have lasted me longer than 2 weeks. Give credit where it's due! Just because you're old and boring doesn't mean you have to hate on styles you don't like.

NWintheUSA (Aug 6, 2021 at 20:41)
Being a true northwesterner it’s Rainier or Henry Weinhard Private Reserve. Toured the Oly plant back in the 80’s as a kid (my dad’s beer choice).

Skippy24 (Aug 6, 2021 at 14:24)
@tacklingdummy: Oh man. I tried to erase King Cobra from my memories until you brought it up. Back in my college days drinking two 40s of that swill would ensure I woke up on some random lawn with the sprinklers going off.

KolaPanda (Aug 6, 2021 at 18:18)
I personally would instantly buy a PBR edition transition bike, maybe the new Patrol would fit the vibe?

friendlyfoe (Aug 6, 2021 at 21:35)
Would be a good idea to include close up video of the gloves either at the end of the video or separately. Assuming they're good quality of course LOL.

suspended-flesh (Aug 6, 2021 at 11:30)
@nojzilla: America makes some of the best beer, wine, and buds in the world and a load of watered-down garbo too. Sometimes you just want to power down 5 light beers without the sledgehammering of a real ale.

SATN-XC (Aug 6, 2021 at 8:18)
...this is actually pretty badass. Wife may have an opinion about the Hawaiian button down jersey I'm about to buy but I'll take that chance, lol

TotalAmateur (Aug 6, 2021 at 8:38)
does anyone actually drink Pabst and enjoy it or is it just for the hipster/ironic vibe?

SterlingArcher (Aug 6, 2021 at 9:11)
PBR tastes way better than bud, coors, and Miller lite. And about the same price. It’s a practical choice. Having one right now

TotalAmateur (Aug 6, 2021 at 9:28)
@jpwvy5: I wrote that comment then immediately thought of like 100 beers that are far inferior to pabst lol. I think CA people just get spoiled with options

TotalAmateur (Aug 6, 2021 at 9:30) (Below Threshold)
@SterlingArcher: just FYI for everyone this guy sends anti trans dms to me daily now. total toxic bigot.

RadBartTaylor (Aug 6, 2021 at 9:34)
It's just as bad when people who *think* they know good beer call it crap....it is what it is, simple, light and cheap nothing wrong with that....time and a place for it...just like a fancy micro....when I get done after a long day of riding nothing much better than a cold PBR or coors/bud/miller/Kokanee. When I'm out having some good food or and in the mood I'll order a nicer micro....for those in-between times, either one works....

noapathy (Aug 6, 2021 at 10:05)
@RadBartTaylor: You really need to stop enjoying life and become more trendy before the internet finds out.

TotalAmateur (Aug 6, 2021 at 12:10)
@RadBartTaylor: that's true, wasn't trying to say it wasn't good, personally I don't like it but it also seemed to be more of a fashion/social trend than anything with so many clothing brands etc. mimicking their logo for one off designs.

RadBartTaylor (Aug 6, 2021 at 12:13)
@TotalAmateur: For sure, I guess it depends on WHY.....the hipster crowd here in hipster central USA (Portland) won't drink anything BUT PBR it seems...kinda silly

TyPierce (Aug 6, 2021 at 10:40)
@mtshakira: Clearly the majority of Pinkbikers have never tooled around on a three-tone Ibis from the 80s, or they're not dads that have rounded the turn into IDGAF-It's-Hawaiian-Shirt-Time Mode!