Has the new Cannondale downhill bike has been spotted again? This time it's not a grainy Instagram story but some footage from Round 3 of the Portugal DH Cup, which is being held on the Lousa World Cup track this weekend. 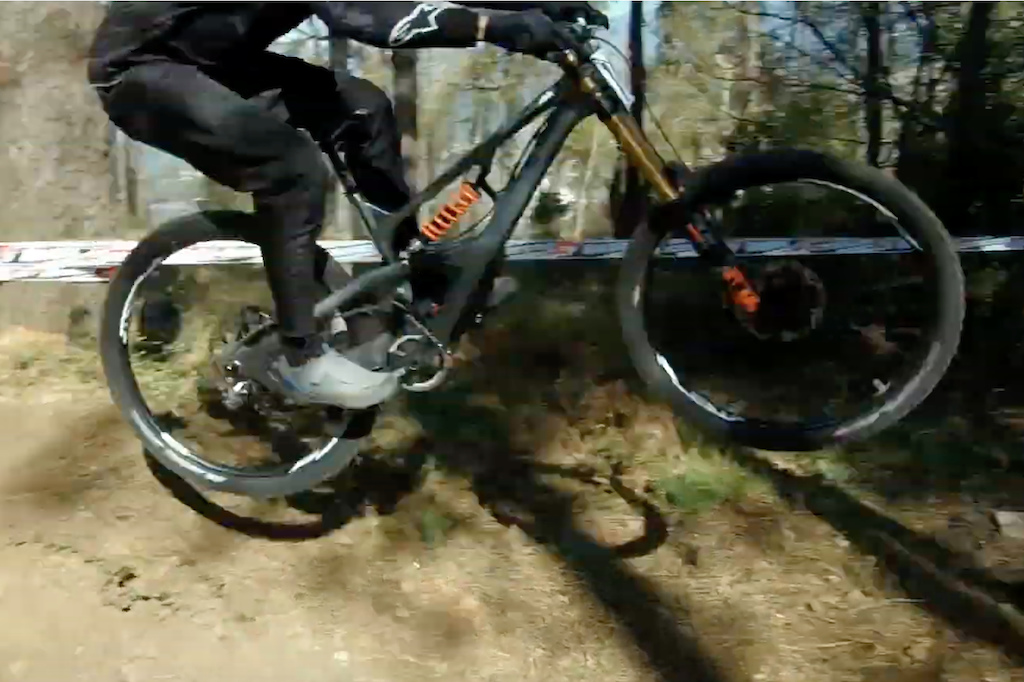 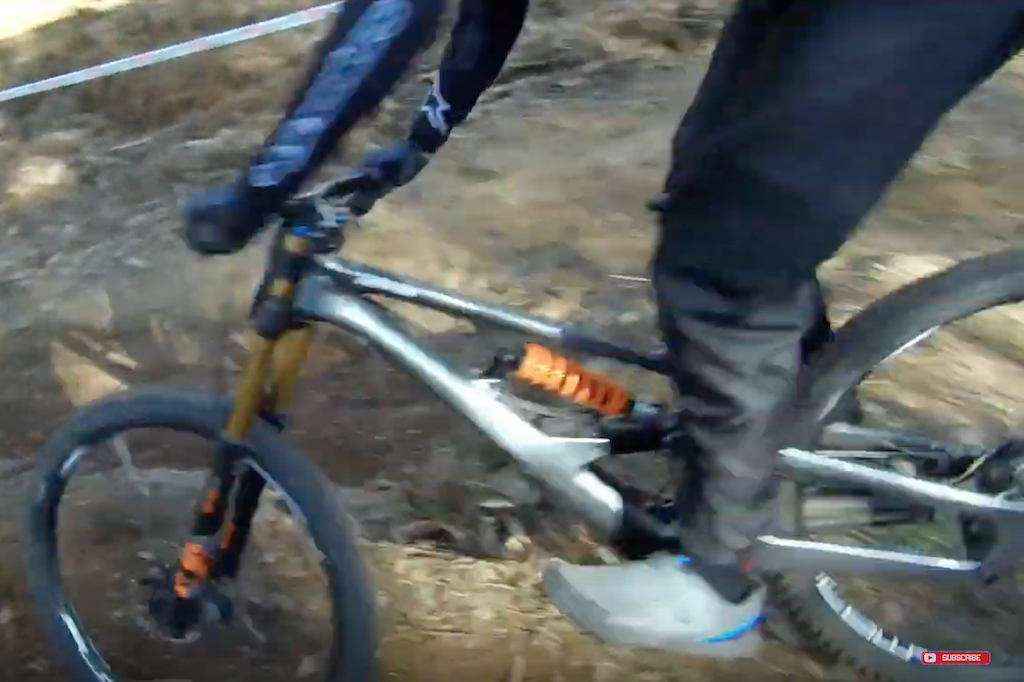 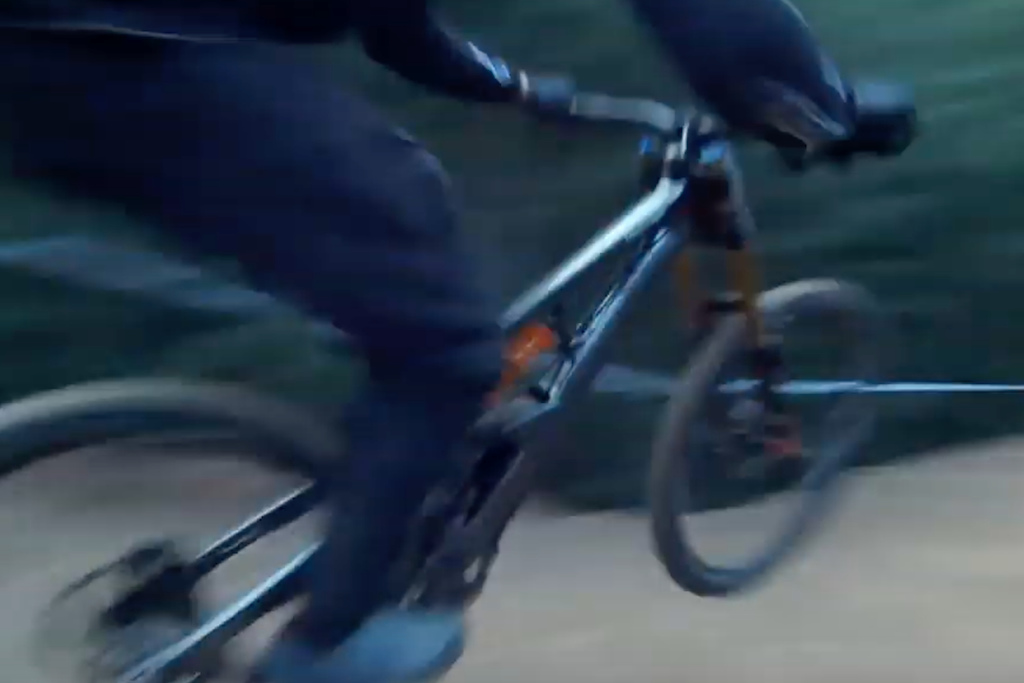 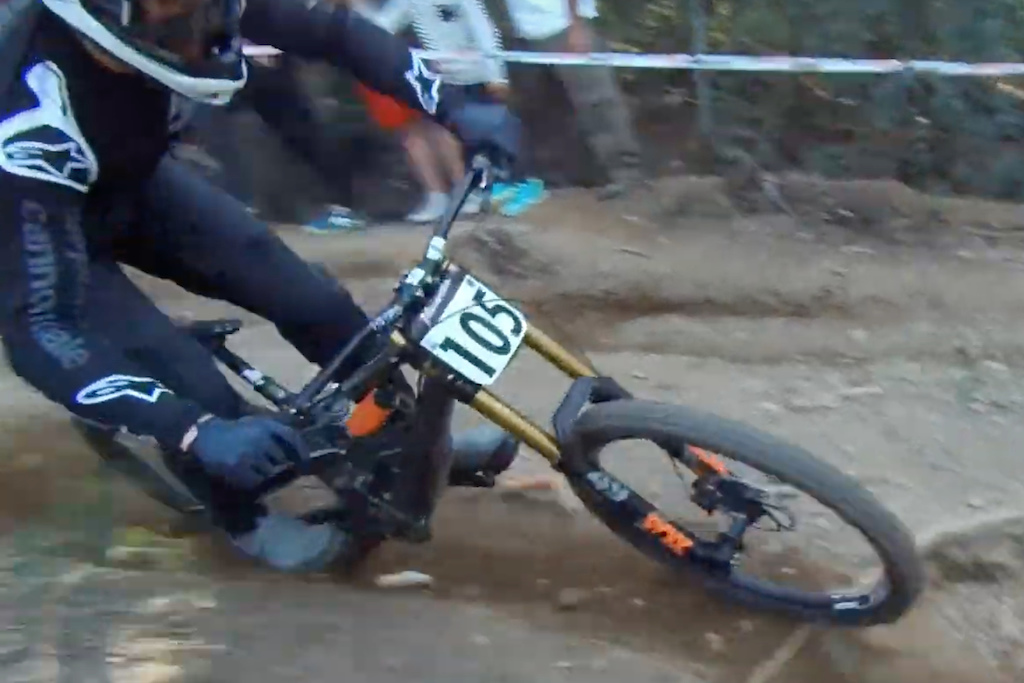 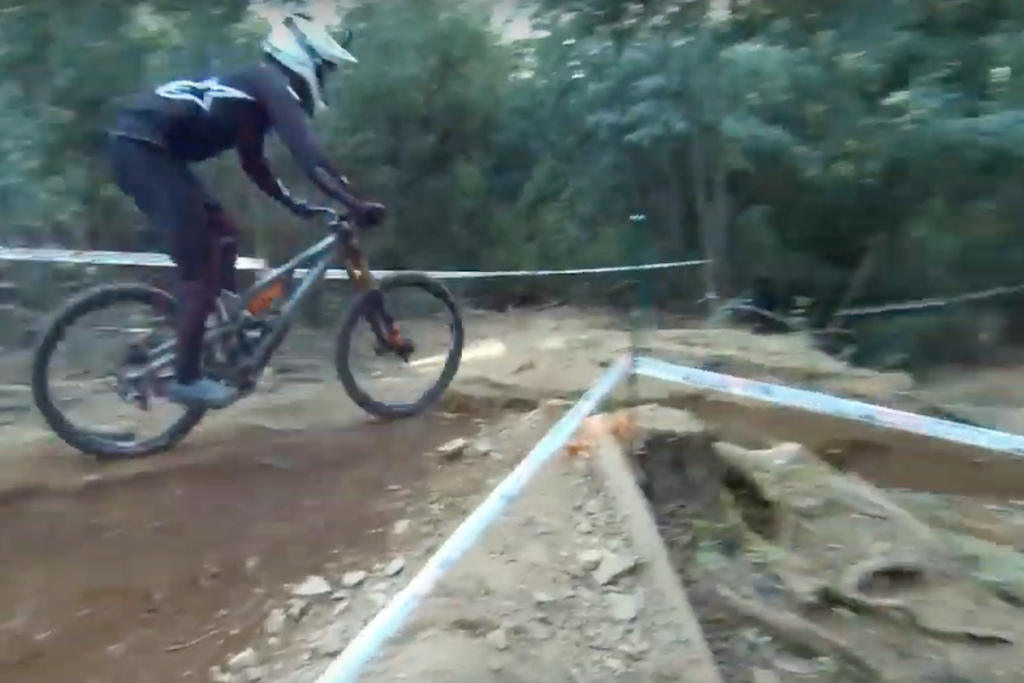 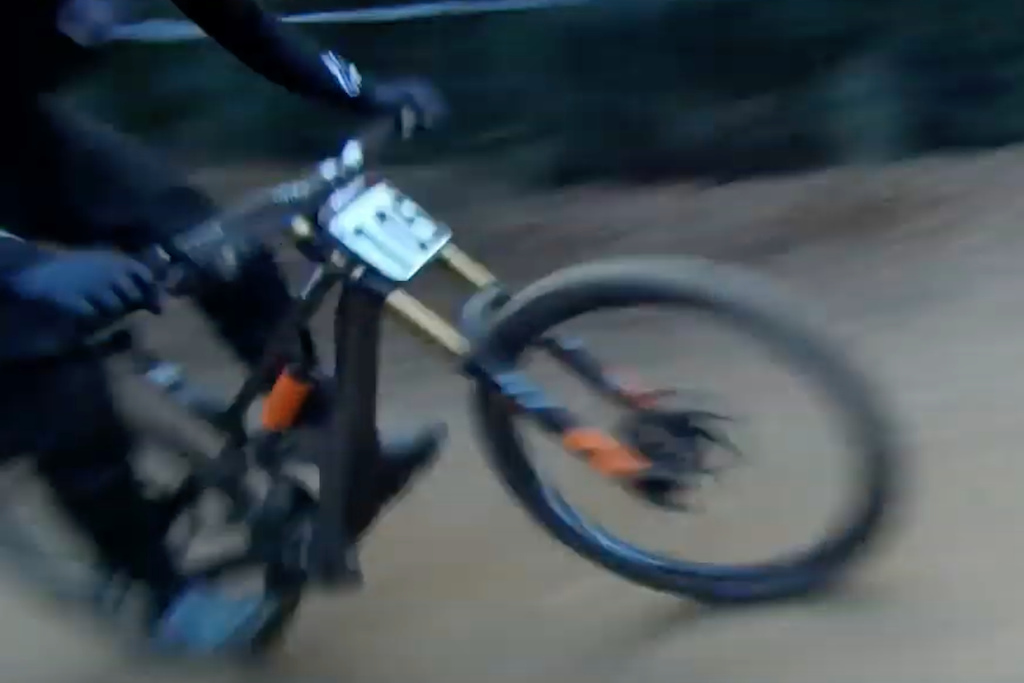 We're a bit confused here as the shock seems to be in a different position to photos we've seen before. However we recognise the chainstays and downtube from other photos circulating the web. What we can tell is that the bike is using a 29" front wheel, and probably a 29 inch rear wheel too. It has also got a idler pulley on the chain and there seems to be something going on just above the bottom bracket (check out the red speck on the first screengrab).

It should be an interesting race with the new Atherton bike being raced for the first time as well as World Cup regulars such as Danny Hart, Phil Atwill, Jack Reading and the Commencal team all putting tyres to dirt. Stay tuned for the results after the weekend.

heavyp (Mar 24, 2019 at 19:14) (Below Threshold)
Dear Pinkbike please just post the pictures and let the puplic figure it out in the comments as your first look/spotted posts sound like they have been written by a 10 year old!

lbsteinm (Mar 24, 2019 at 9:52)
Is this the same photographer taking pictures of big foot and the Loch Ness monster?

PauRexs (Mar 25, 2019 at 4:44)
what´s wrong with the blacked censored guy at the podium picture? It was a naked spontaneous that came along there? Sorrry I found it disrespectfull, he´s still a human being. He is not as cool as those super pros but still deserves some respect if is there and probably done something for this competition being celebrated...,

stevesmith-ss (Mar 25, 2019 at 10:29)
@leviatanouroboro: panties are fully untwisted, thankyou for reminding me to do that. Now, run along, find yourself some nice dry lube and do one.

nickkk (Mar 24, 2019 at 9:16)
Any chance there's a second damper of some kind in the down tube. It looks like the protector plate is bowed out slightly to the front?

vinay (Mar 24, 2019 at 14:11) (Below Threshold)
@bashhard: I see an orange coil. Considering the quality of the pictures, it was probably red. Which means, it was a Romic shock. From back when Cannondale was making DH bikes.

I expect there is room between that shock link for a piggyback shock. Or maybe a return of the remote piggyback.

greglikesspecialized (Mar 24, 2019 at 14:42)
@vinay: Definitely a fox spring, you can colour match the colour to the stickers on the fork also a Kashima damper shaft.

special-jLeslie (Mar 24, 2019 at 19:29)
Wildly uneducated guess- two separate suspension elements with the spring up top and rebound/damping in the downtube? Could their interaction with the frame in different locations change the dynamics of the suspension? Engineers, halp

adventuresbycole (Mar 25, 2019 at 11:21)
@pogan: Yep that's right, saw this frame in Whistler and noticed the two mounting locations right away.

faul (Mar 25, 2019 at 13:50)
@special-jLeslie: I think the two positions gives the same suspension caracteristics.
The top one lets the rider tune the shock.
The bottom one lowers the center of gravity of the bike..

Or, this is not even the real bikes and this is just a diversion preventing us to find the truth.

vinay (Mar 24, 2019 at 14:12)
They also have the Cannondale Moto, which is a bicycle. I expect they'll release the Cannondale Bicycle at some point, which will be a motorcycle.

Henriquedepaula (Mar 24, 2019 at 14:00)
It seem to me that it has 2 front shock mounts' setups, one on the down tube, one on the upper tube, that way they can play with leverage ratio and travel when switching the front of the shock up and down when desired.

greglikesspecialized (Mar 24, 2019 at 14:44)
Seems to be a bracket that is between the two mounts and shock, changing the bracket should give even more room for experimenting

vinay (Mar 24, 2019 at 23:42)
Yeah, late 2005 I saw a picture on the cover of New Zealand Mountainbike Rider of Nathan Rankin riding the 2Stage with the linkage and shocks wrapped in neoprene (so it took another while to learn that there were two shocks in there). Not sure what happened to them. When you check their website all you see is boats. Pinkbike actually seems to have reviewed the bike a couple of years later: www.pinkbike.com/news/2Stage-Elite-9-Test-2009.html

stevesmith-ss (Mar 25, 2019 at 7:24)
Brycland has shared an insta post of him riding a downhill bike, I'm guessing a release will be coming shortly

Lugers (Mar 24, 2019 at 12:47)
If they just put a lefty on the right side also it would be the smoothest most rigid downhill fork on the planet. What am I missing? Price?

jefe (Mar 25, 2019 at 8:19)
You need the magic "enhance" button that they always have in those crime shows to sharpen those photos up!

sethius (Mar 24, 2019 at 14:13)
Clearly a bunch of sooky cannondale owners down voting everyone here haha

enduroNZ (Mar 24, 2019 at 16:01)
Gee, Danny and Phil are still well off the pace in 2nd, 3rd and 4th. 5 seconds behind Amaury Pierron. In world cup terms that's like the difference of twenty/thirty places

foggeloggliod (Mar 24, 2019 at 9:37)
This best photos they got? This bike has been leaked all over Facebook for weeks! Just like the special-ed demo.

blackthorne (Mar 24, 2019 at 16:34)
Care to elaborate? I’m sure there are plenty who would disagree with that assessment.

vitality (Mar 24, 2019 at 11:25)
but crackordie for many ears tried to tell what lefty is superior in all aspects to all existed forks.
So where is superior lefty??