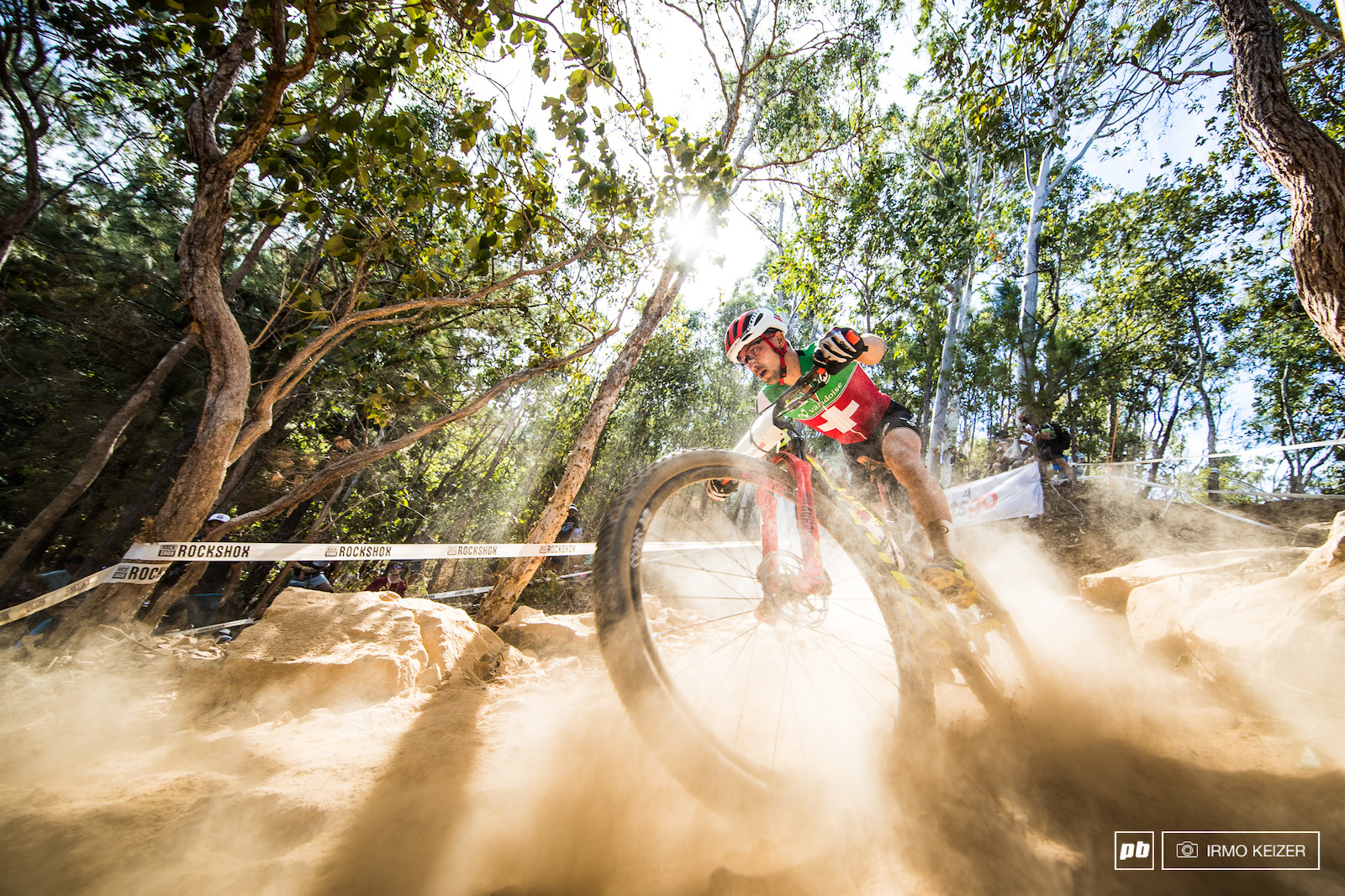 Nino Schurter and Julien Absalon have dominated cross country mountain biking in the last decade. Both have already won five World Champion titles. In Cairns one of them could make it six. No one doubts Schurter's strength as he has won every single World Cup round this year, but Absalon has been getting back in shape and is eager for a win. They are not the only contenders either. Kulhavy, Marotte, Sarrou, Tempier, Fumic, Flückiger...all eager to dethrone the two who have dominated for so long. Cairns, Australia. 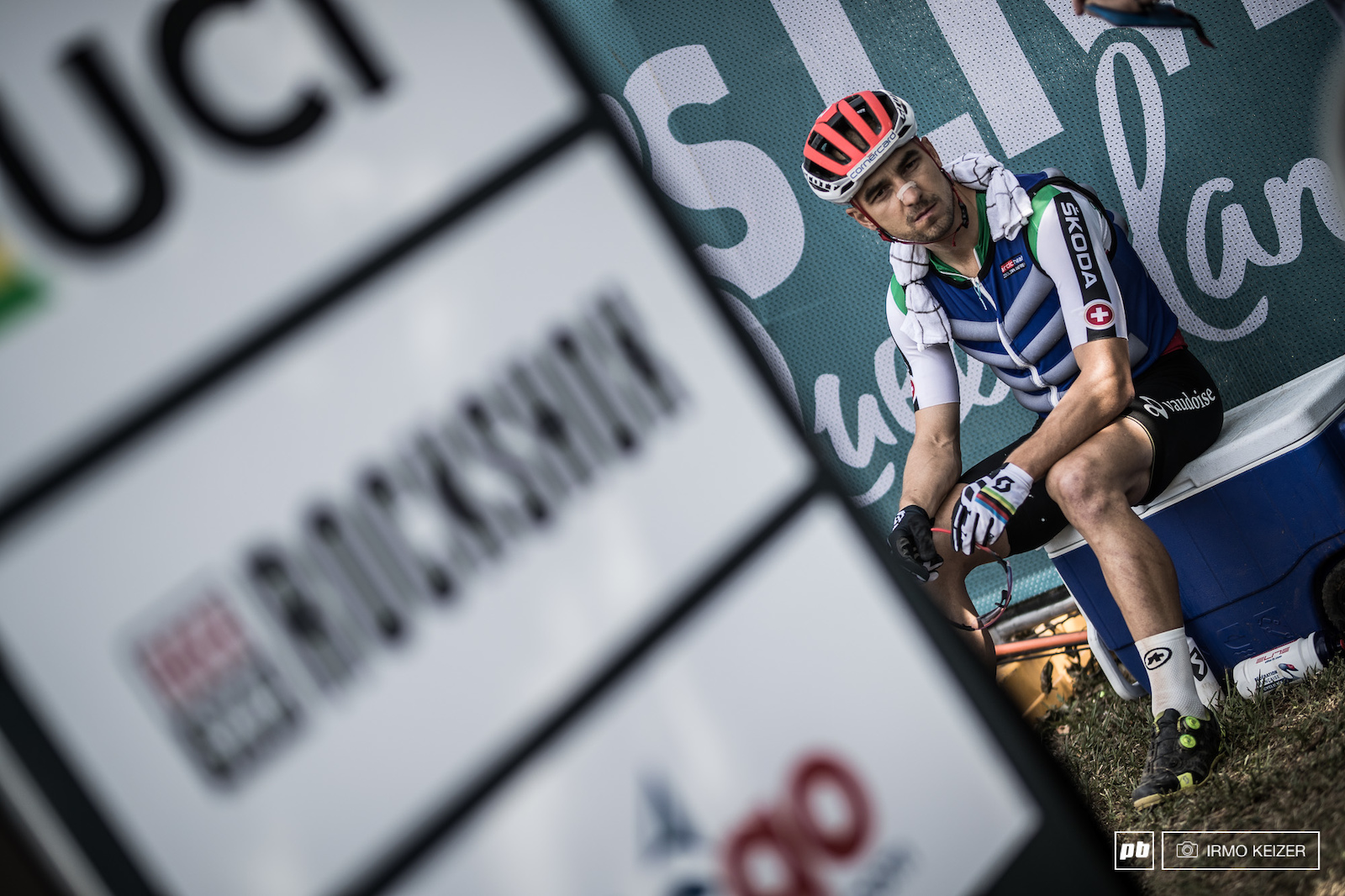 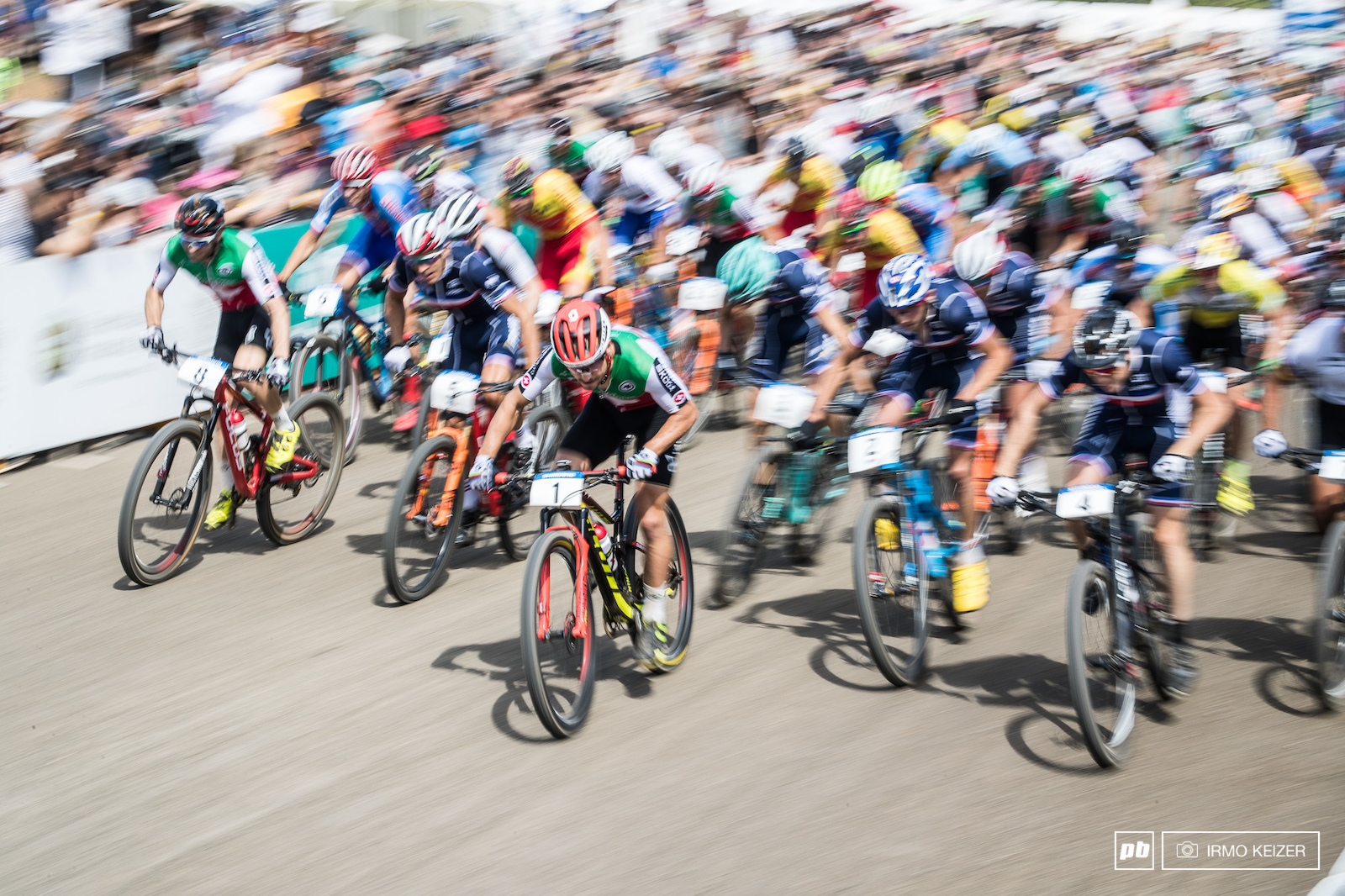 The men elite are off. 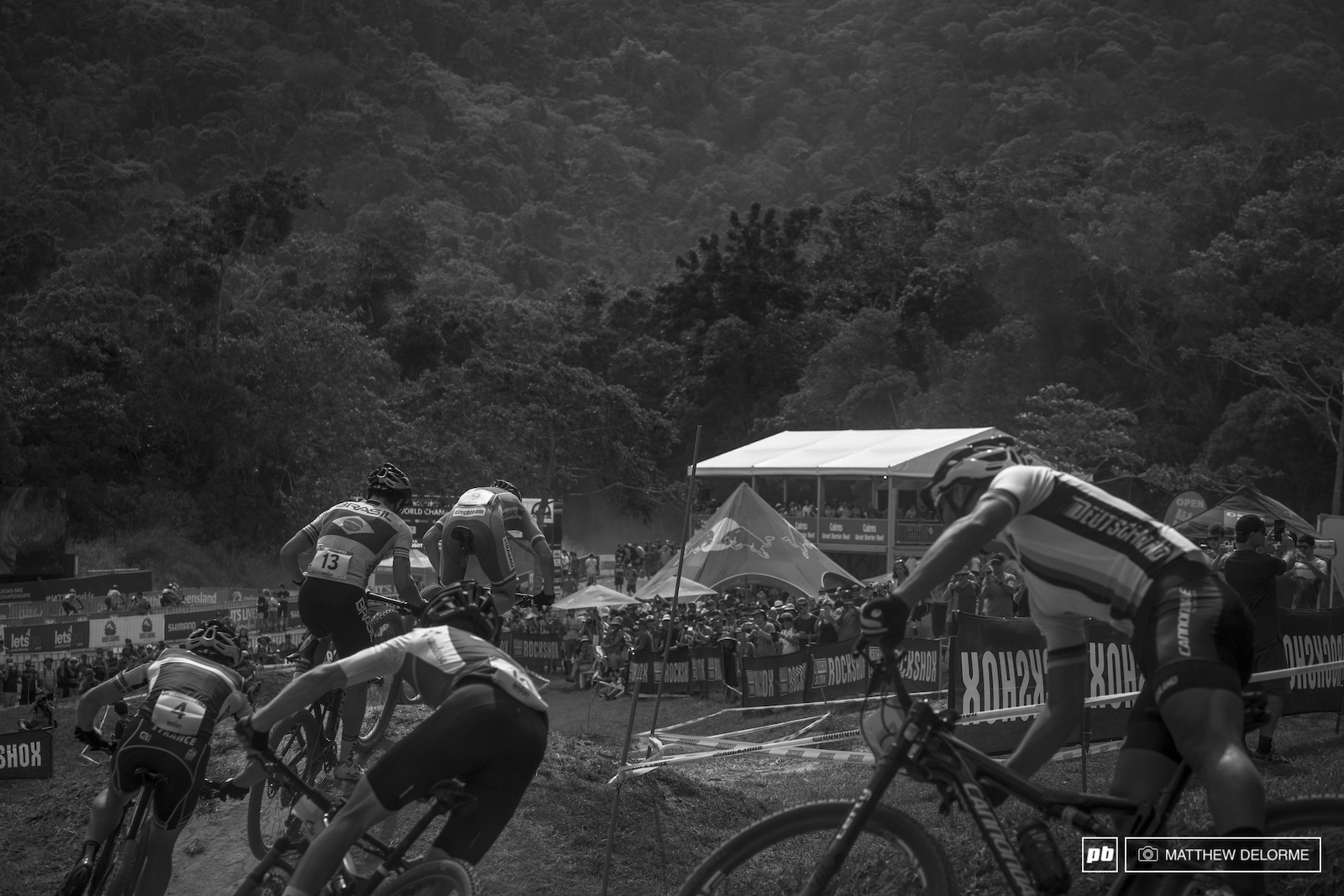 The head of the pack on lap one. 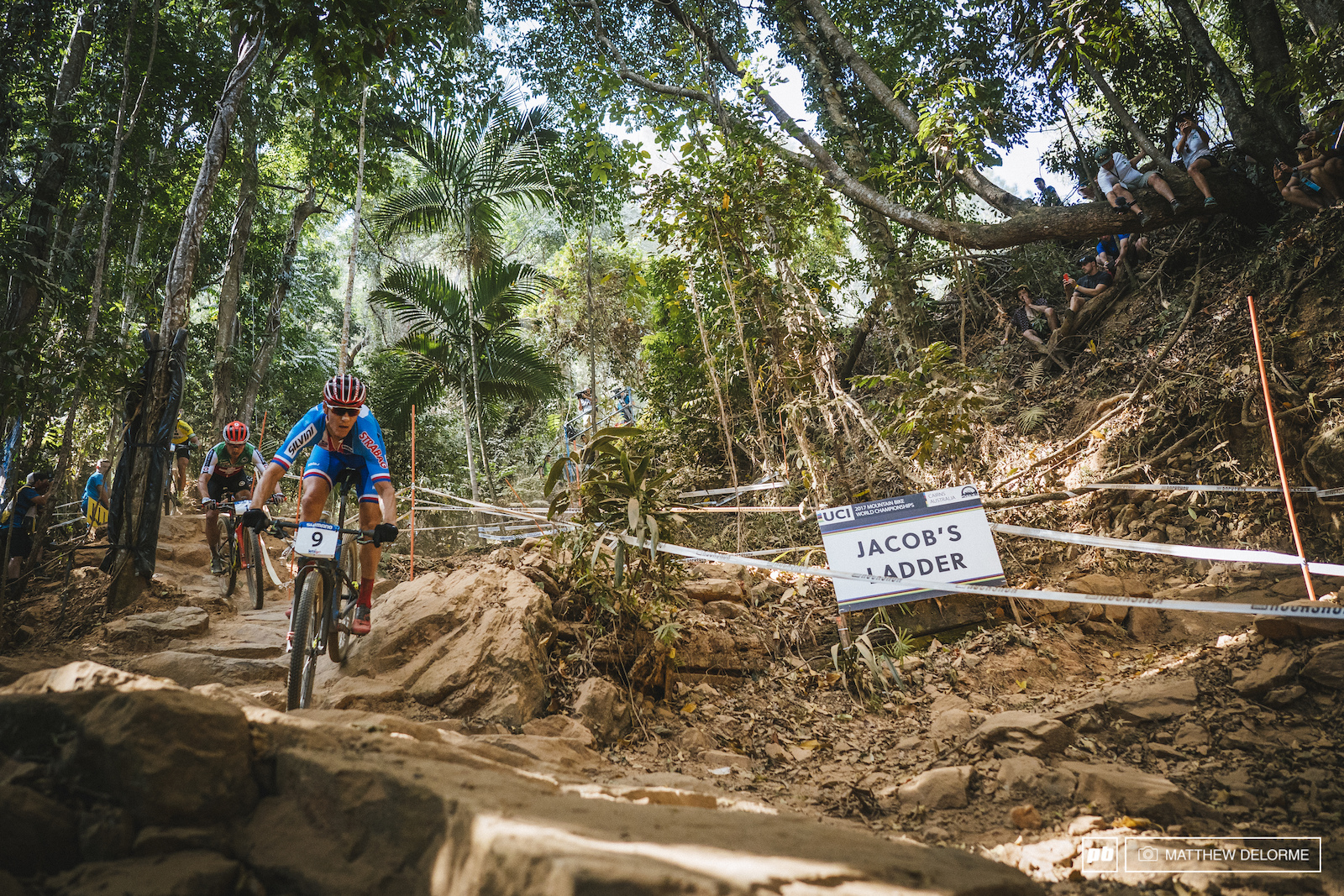 Jaroslav Kulhavy had a commanding lead for much of the race, but he would eventually slip back into second. 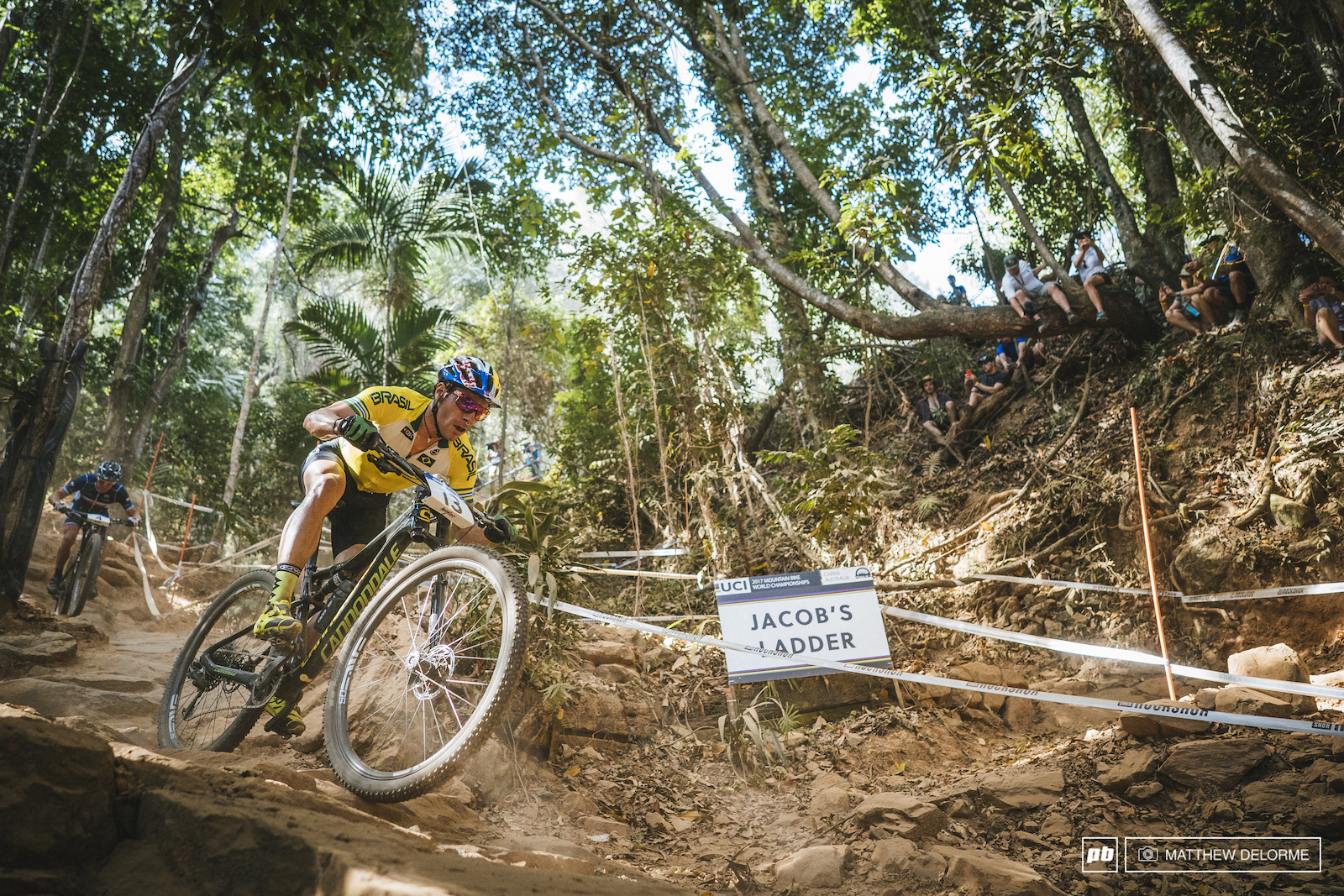 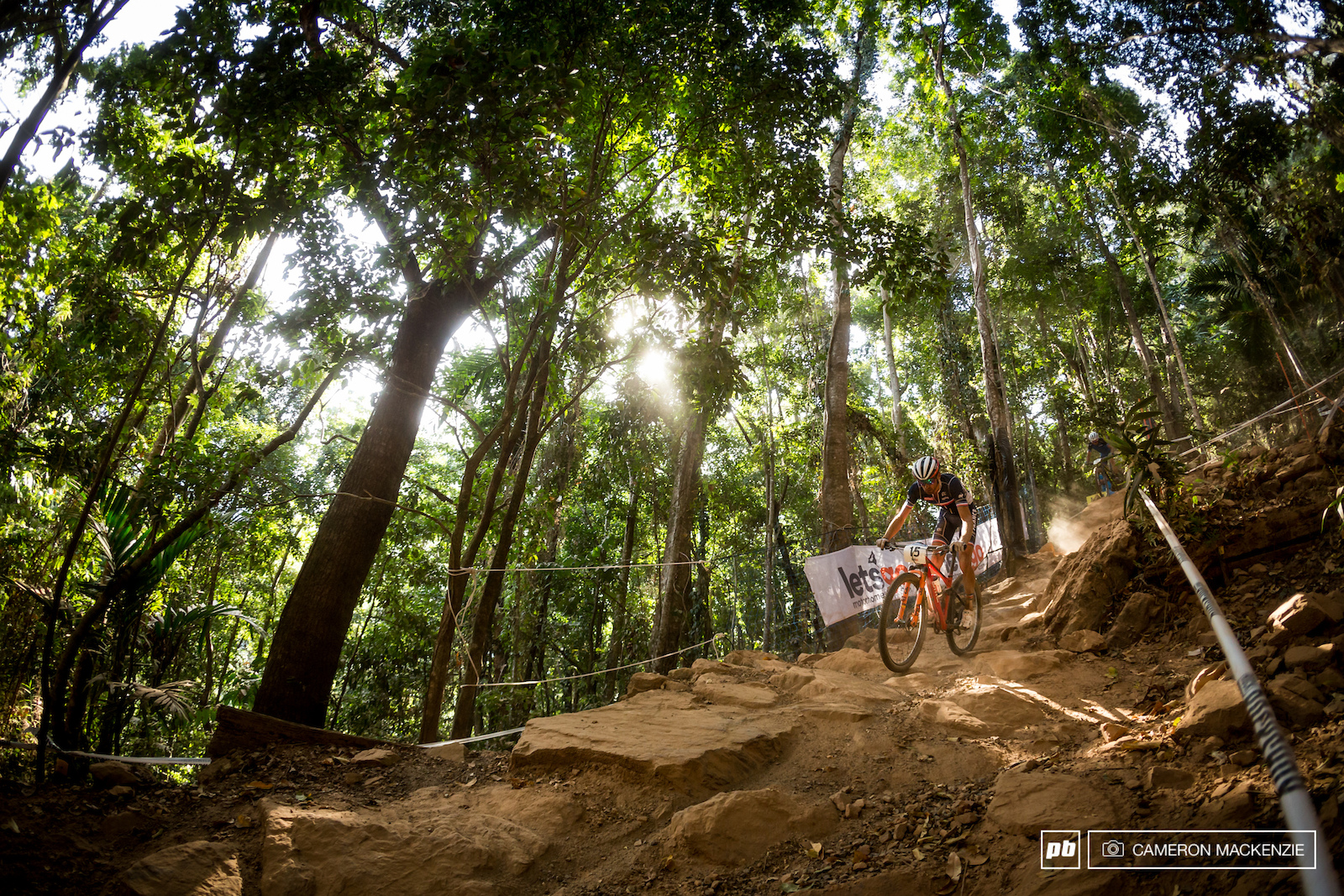 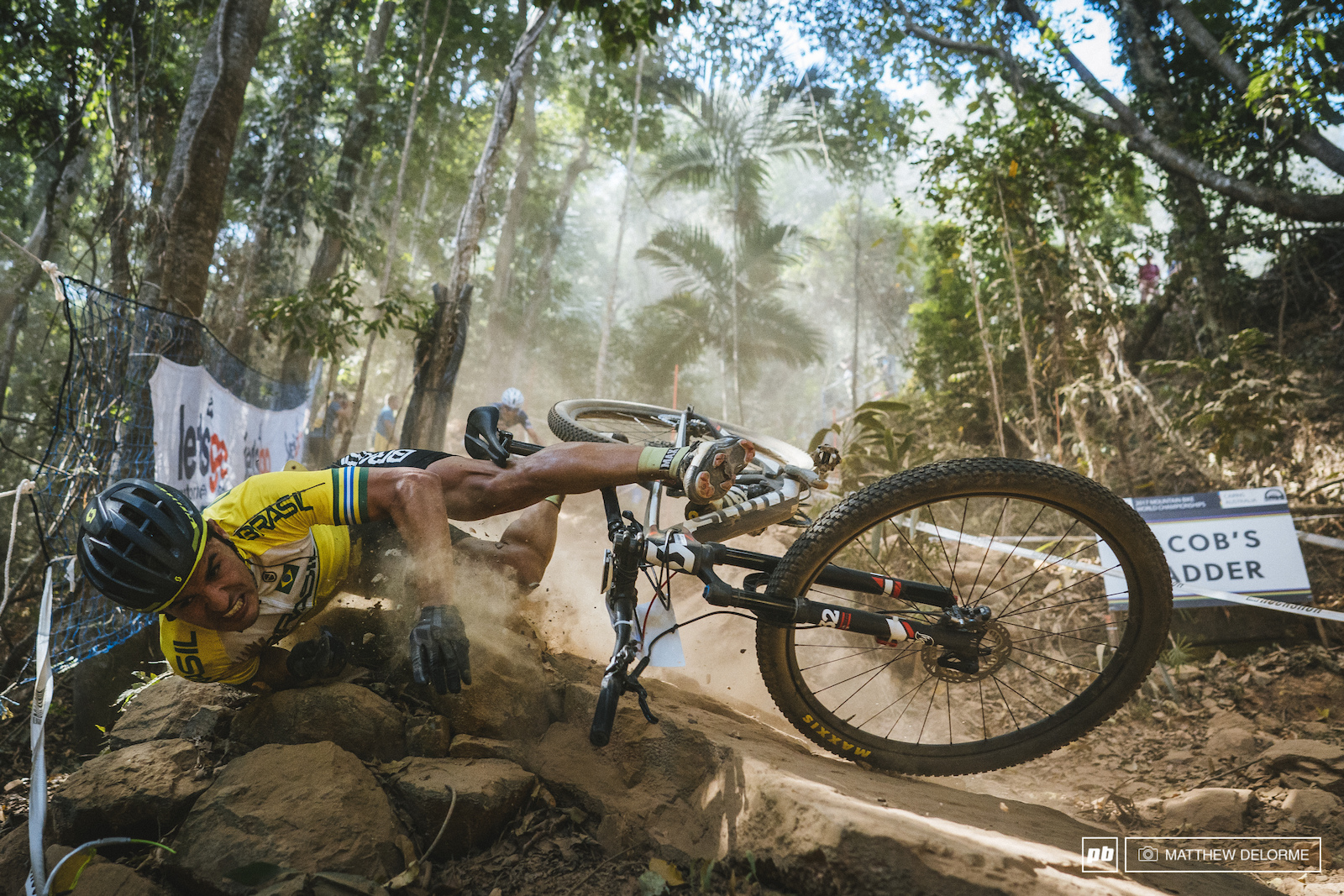 This went nearly as bad for me as it did for him. The crashes were plentiful today. 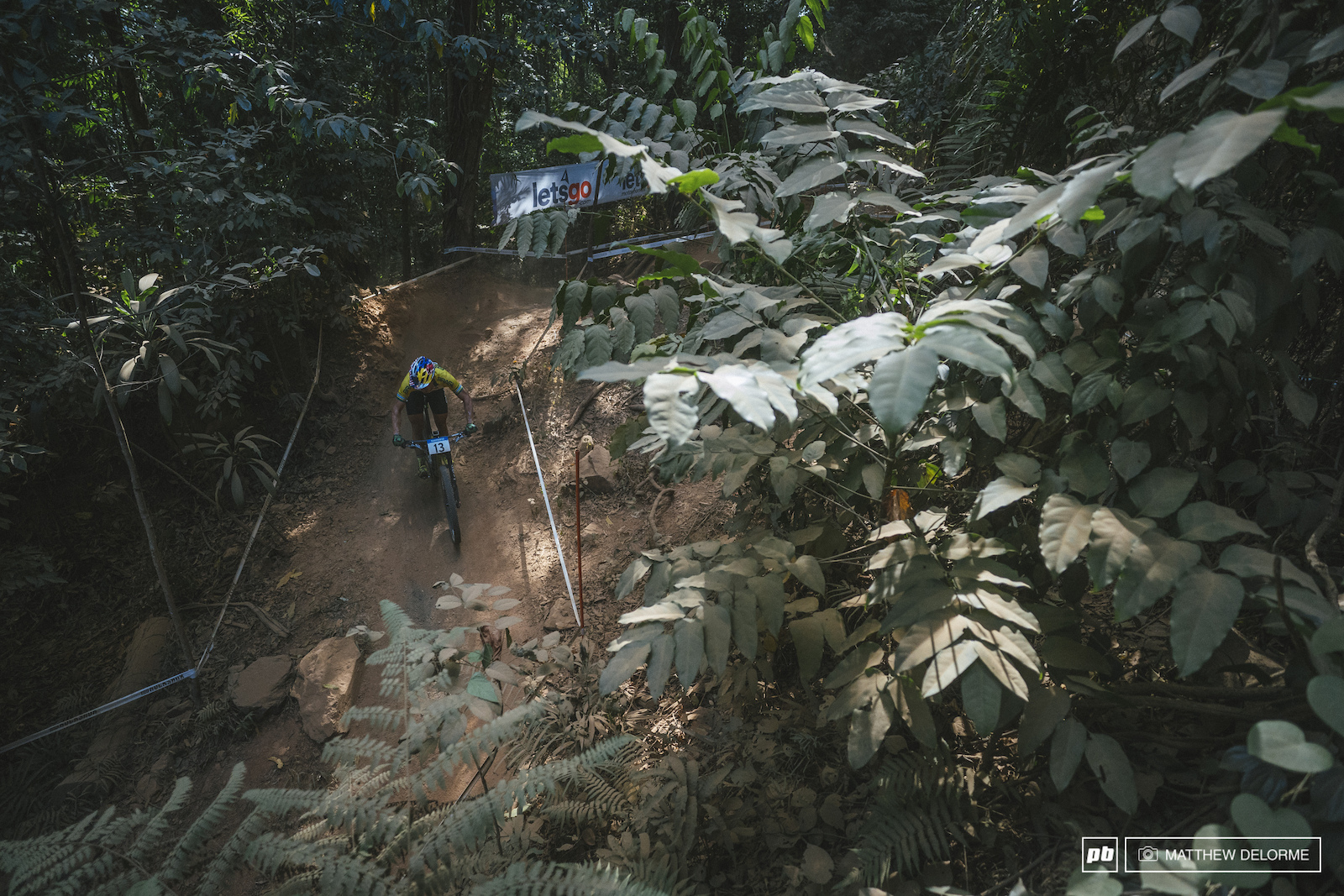 Henrique Avancini kept out of harm's way and raced clean to finish fourth. 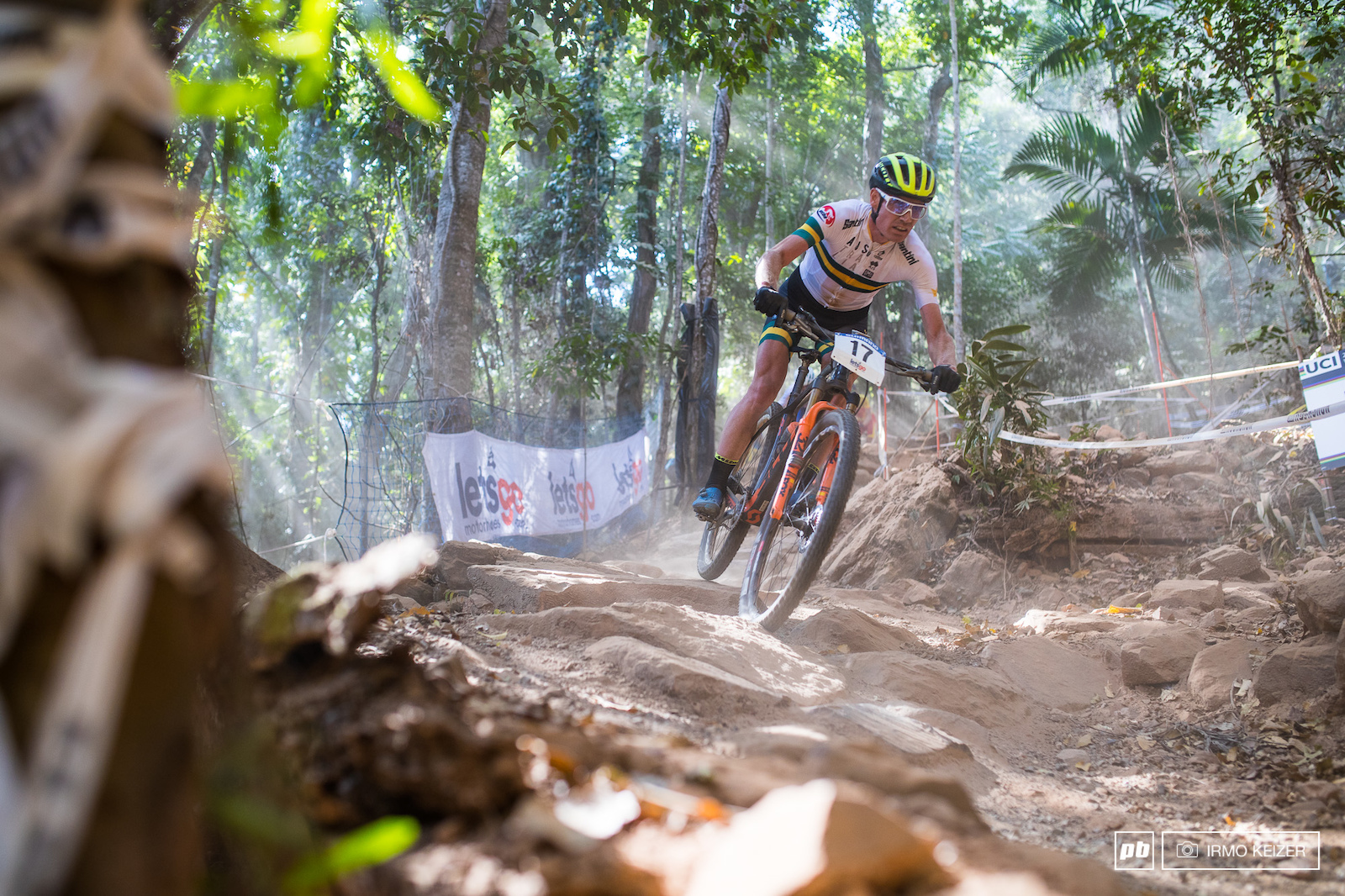 Dan McConnell charged hard in the last two laps, propelling himself to 9th. 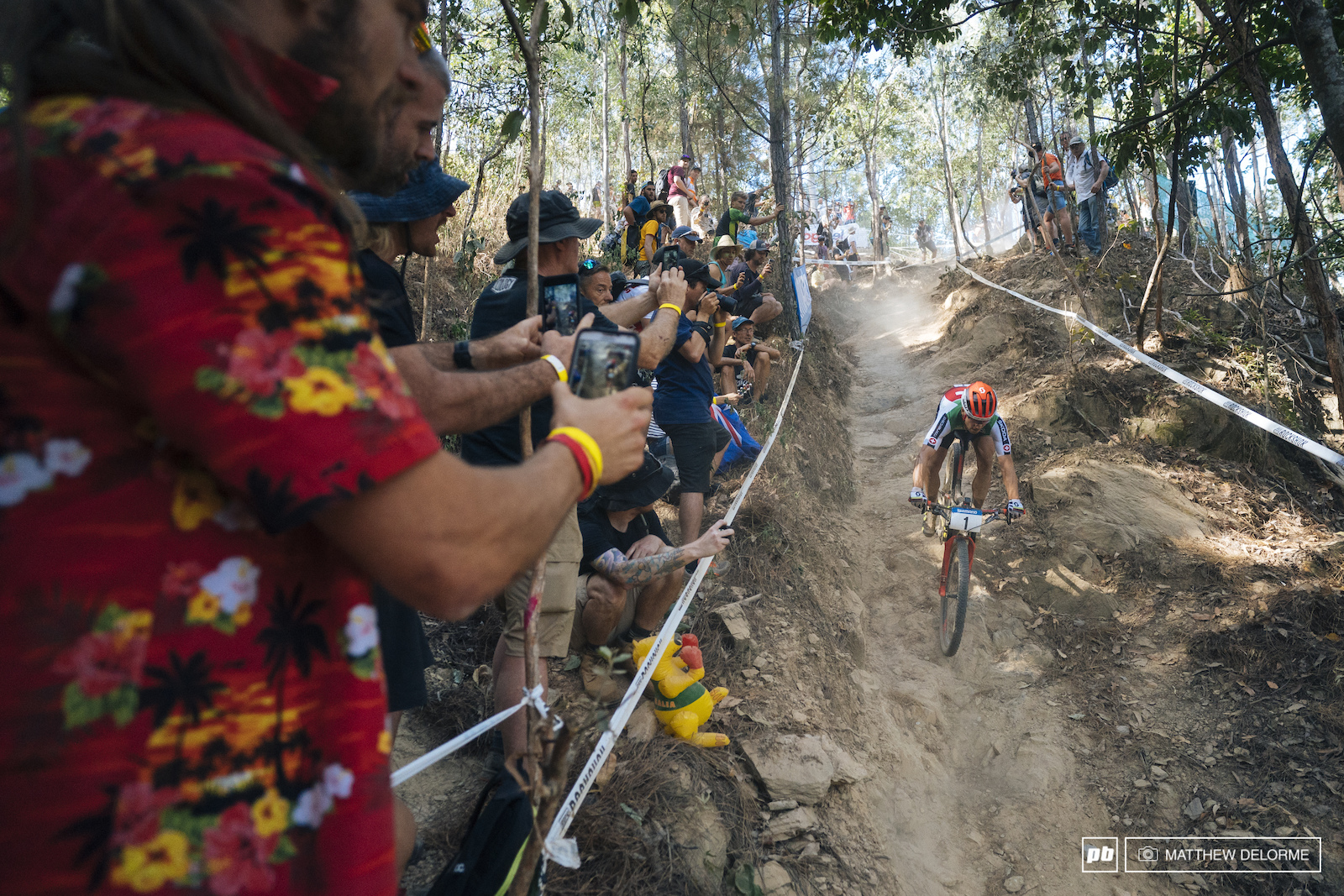 Nino showed what well-honed race craft will do for you. He may not have led the whole race, but he made sure his opponents were tired when it was time to make his move. 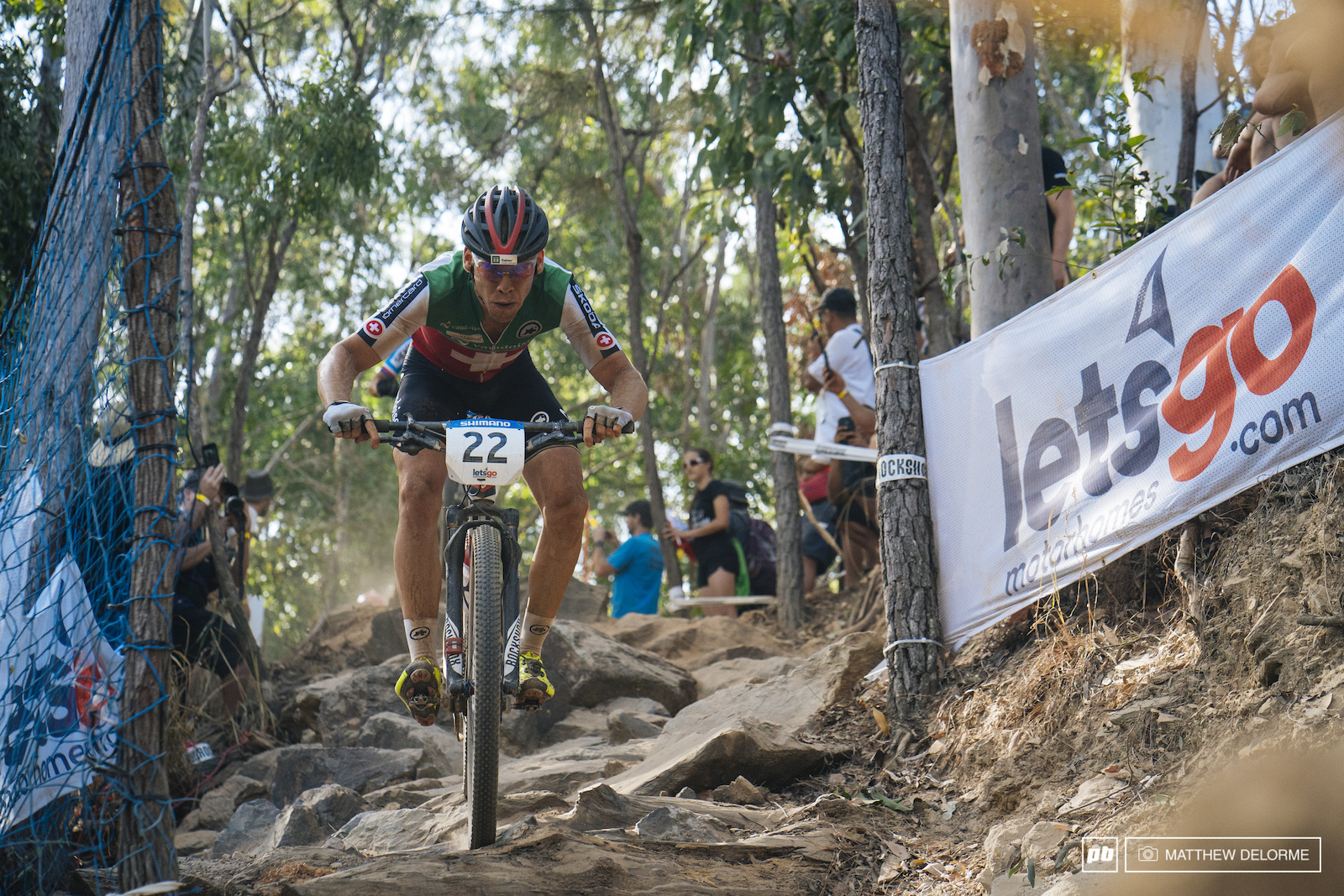 Thomas Litscher had a top day out there in the moon dust taking third, and adding yet another medal to the pile for the Swiss. 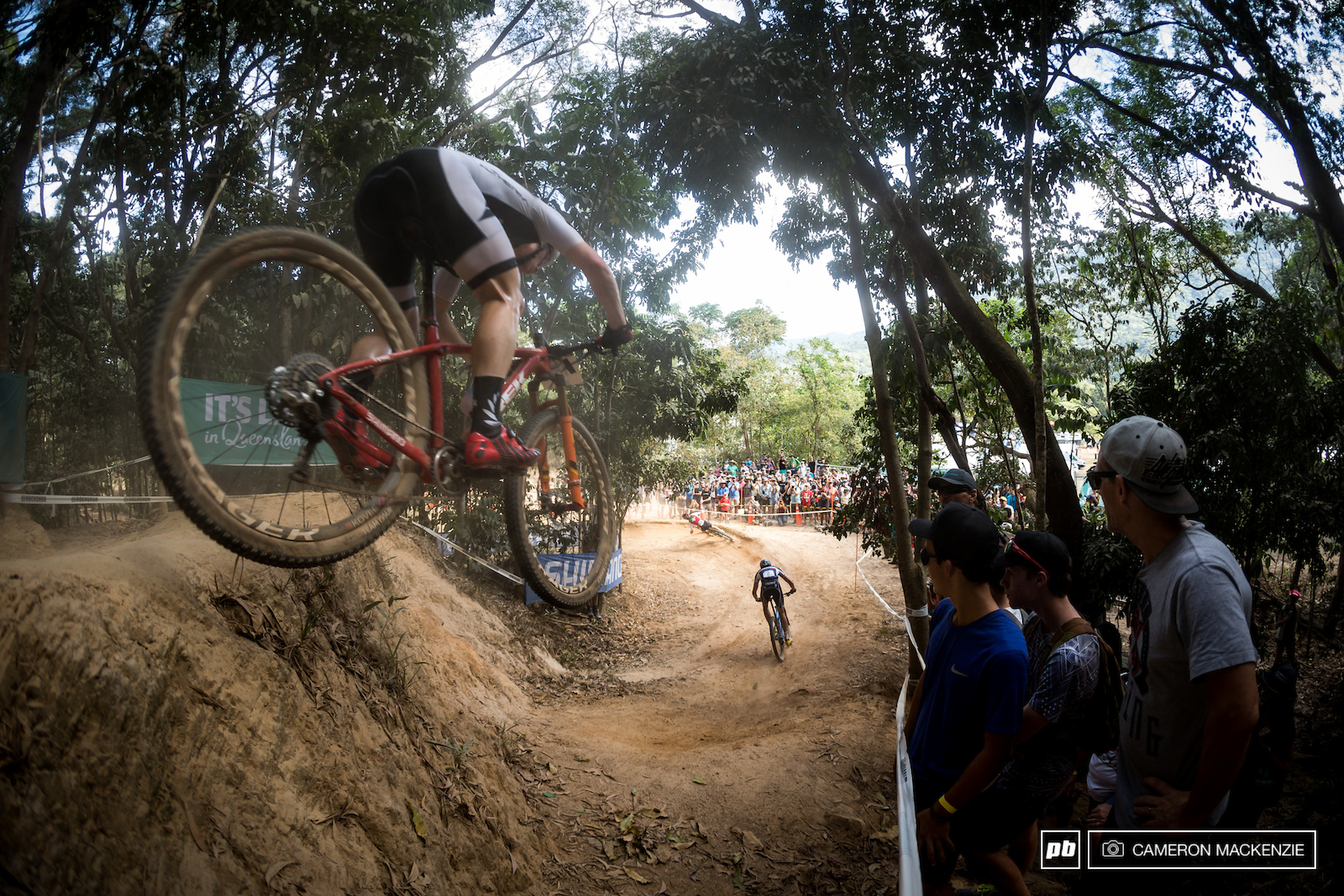 Launching into the Rodeo Drop. 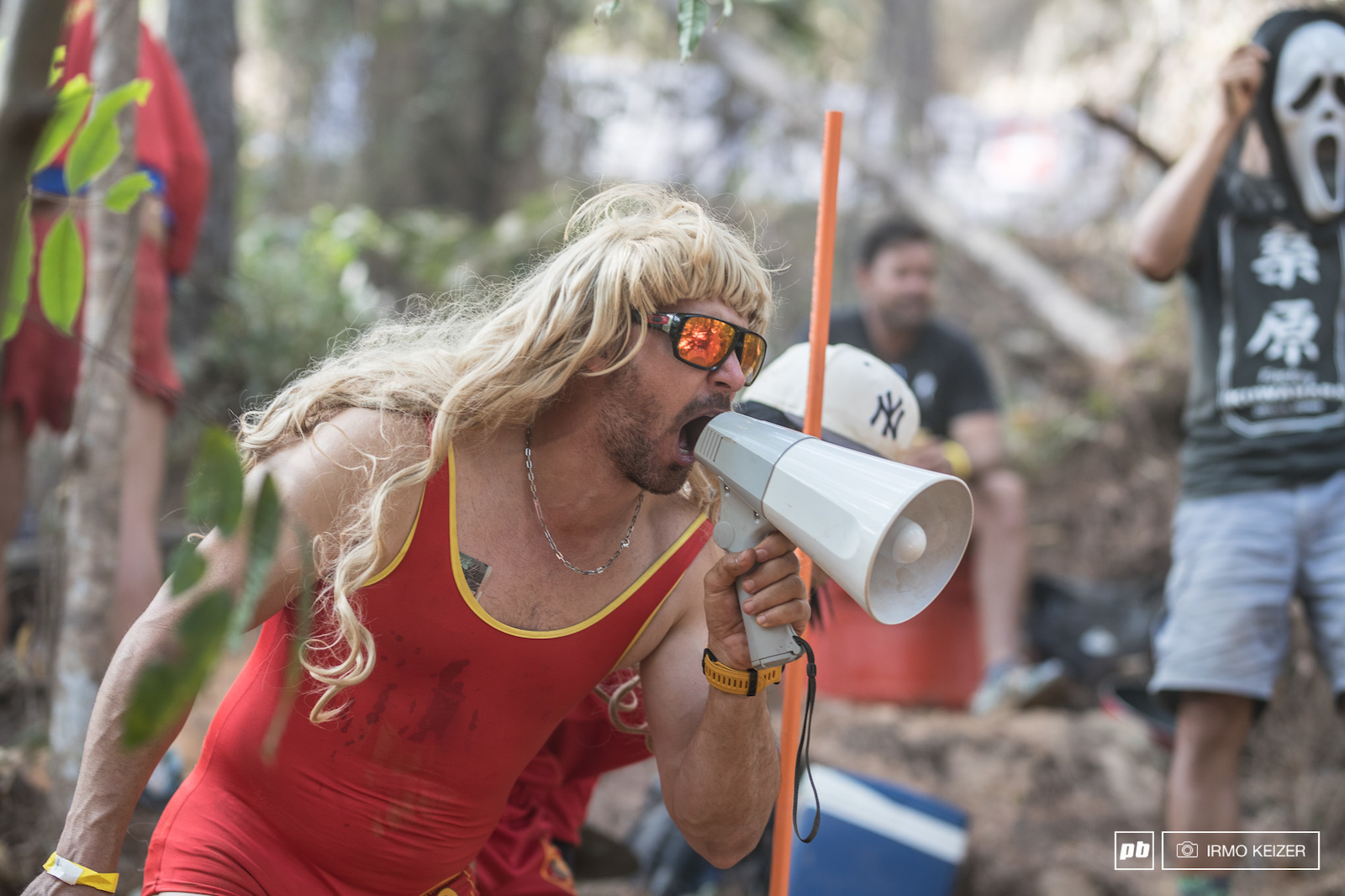 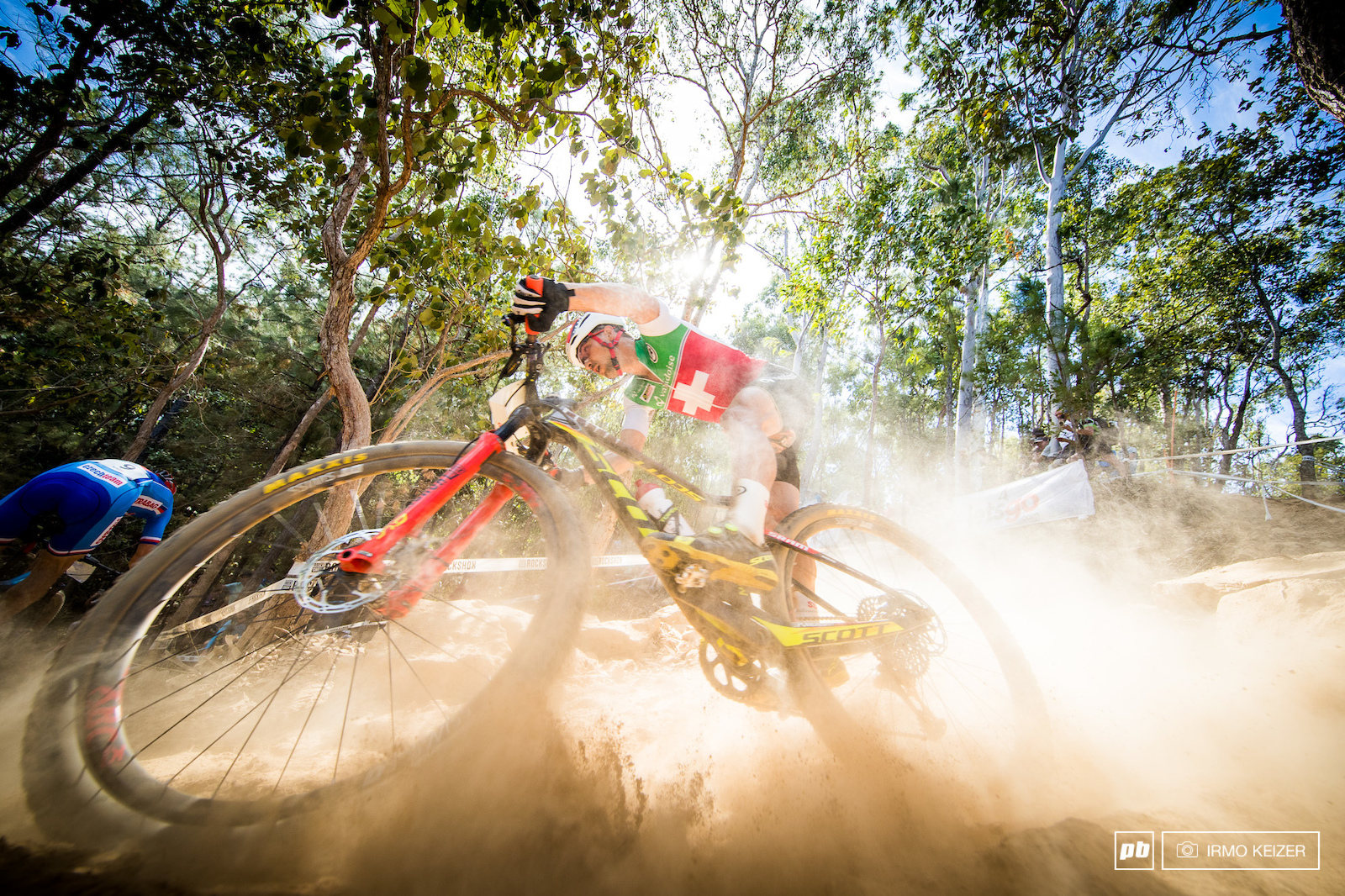 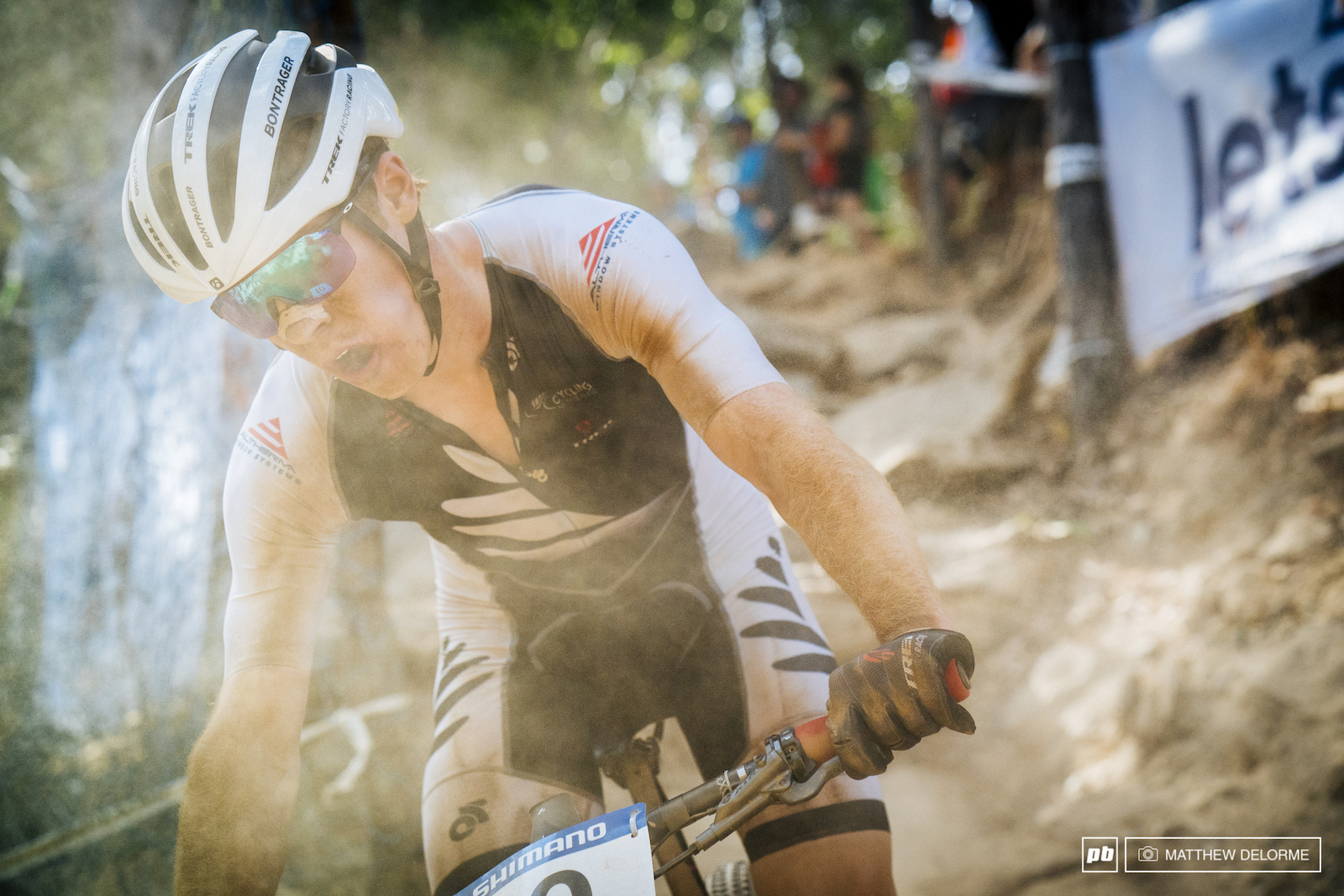 Kiwi Anton Cooper was on pace for a top five finish until a crash with one to go cost him about a minute and thirty seconds. Cooper finished 16th. 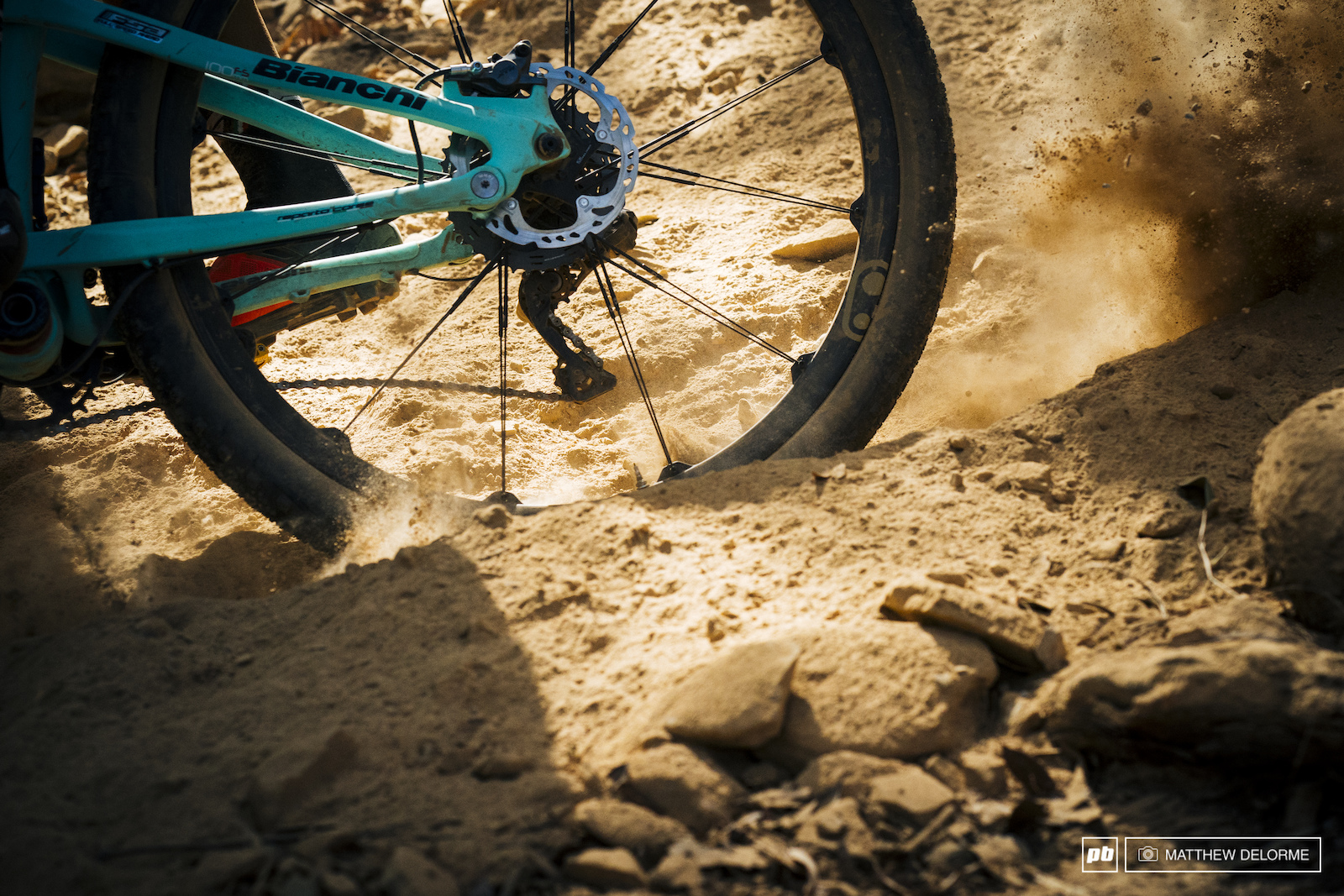 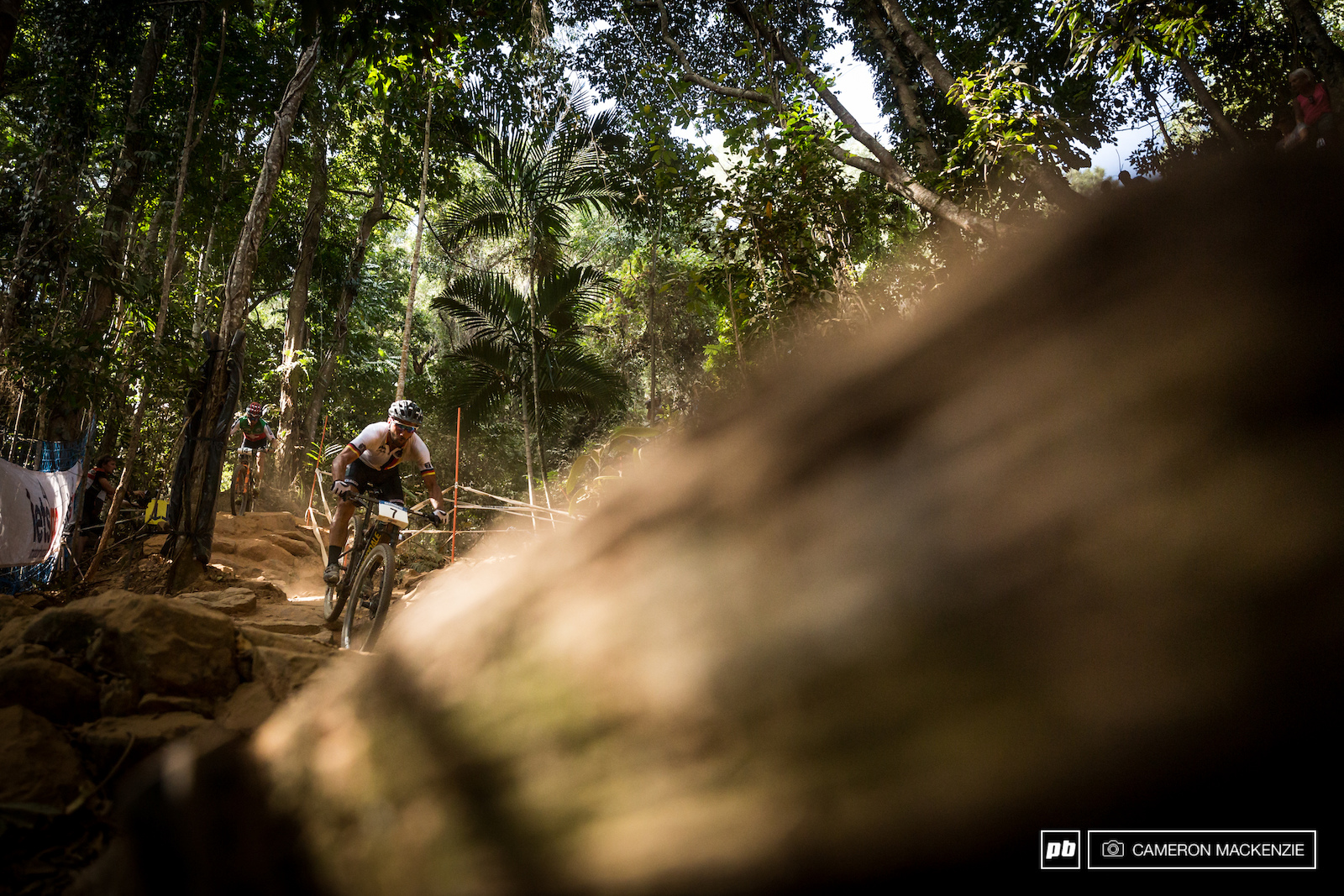 Manuel Fumic put in another solid performance with a 5th place. 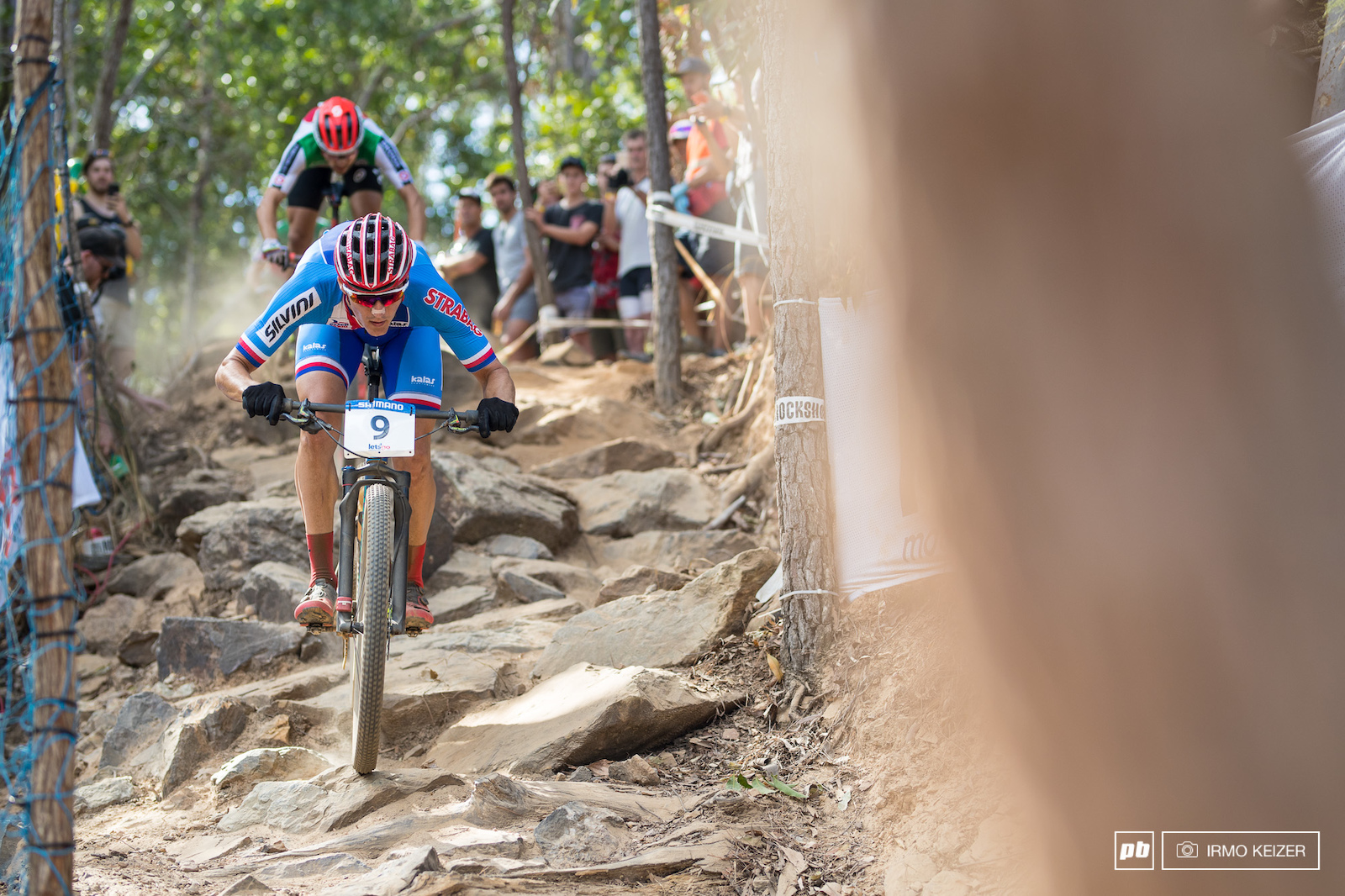 Kulhavy was in top form and charged hard trying to loose Schurter. Schurter observed and made his move in the last lap, overtaking Kulhavy before the downhill towards Jacobs Ladder. Gaining 10 seconds in the downhill, Schurter rode to the win comfortably 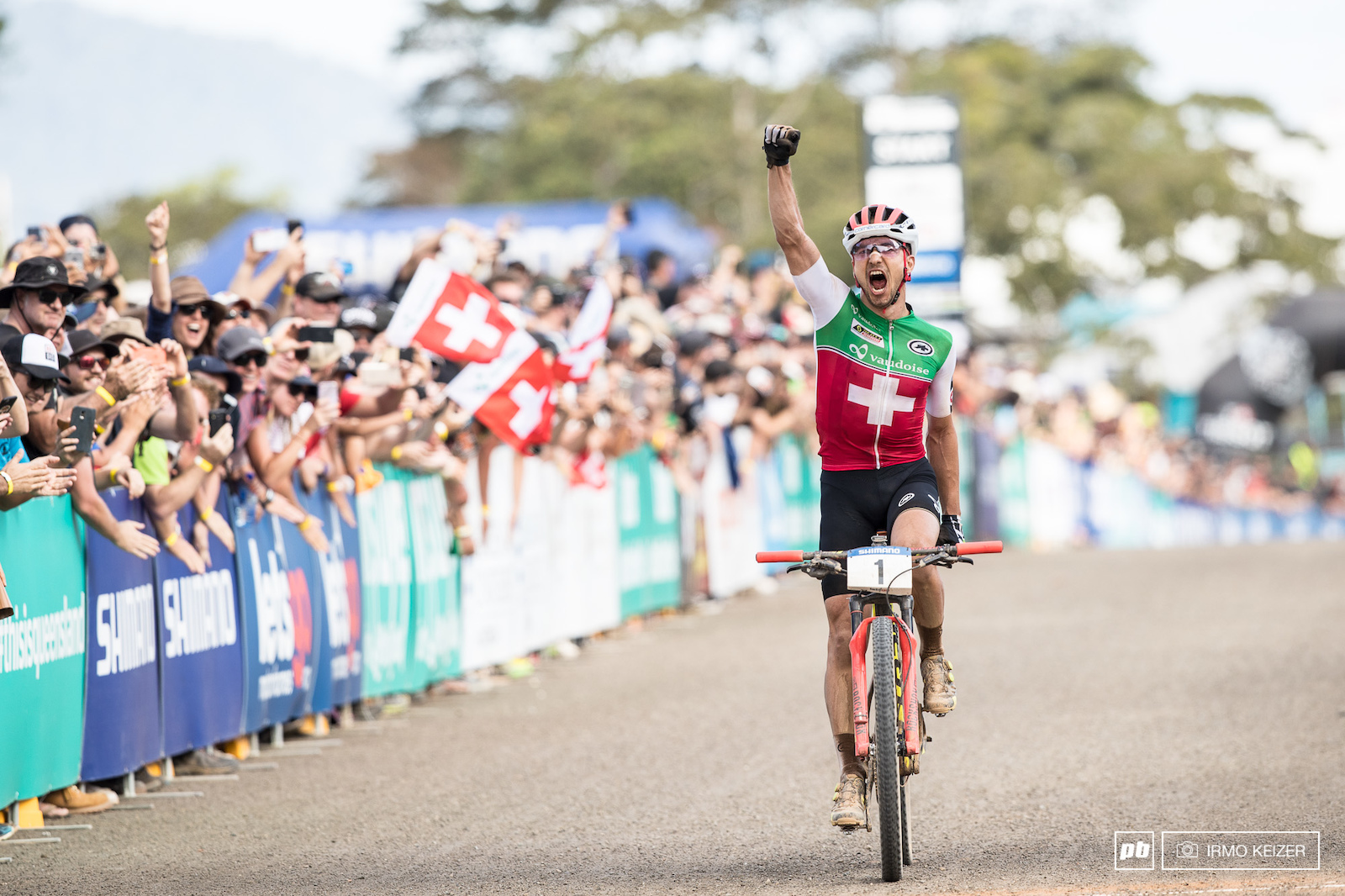 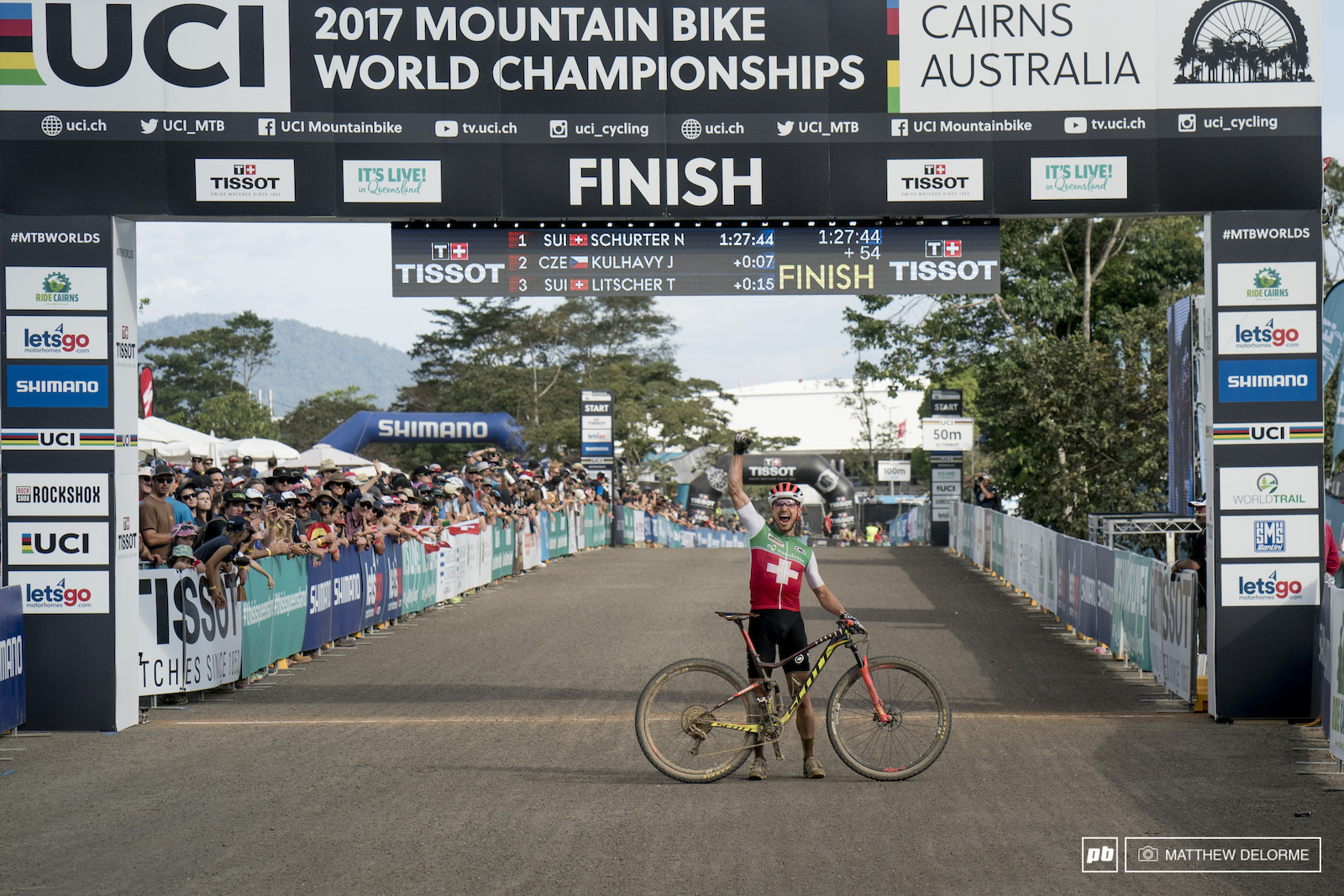 It's now safe to say that it could be a long time before we see a talent like Nino come along. He has sealed the deal for the title of The Greatest. 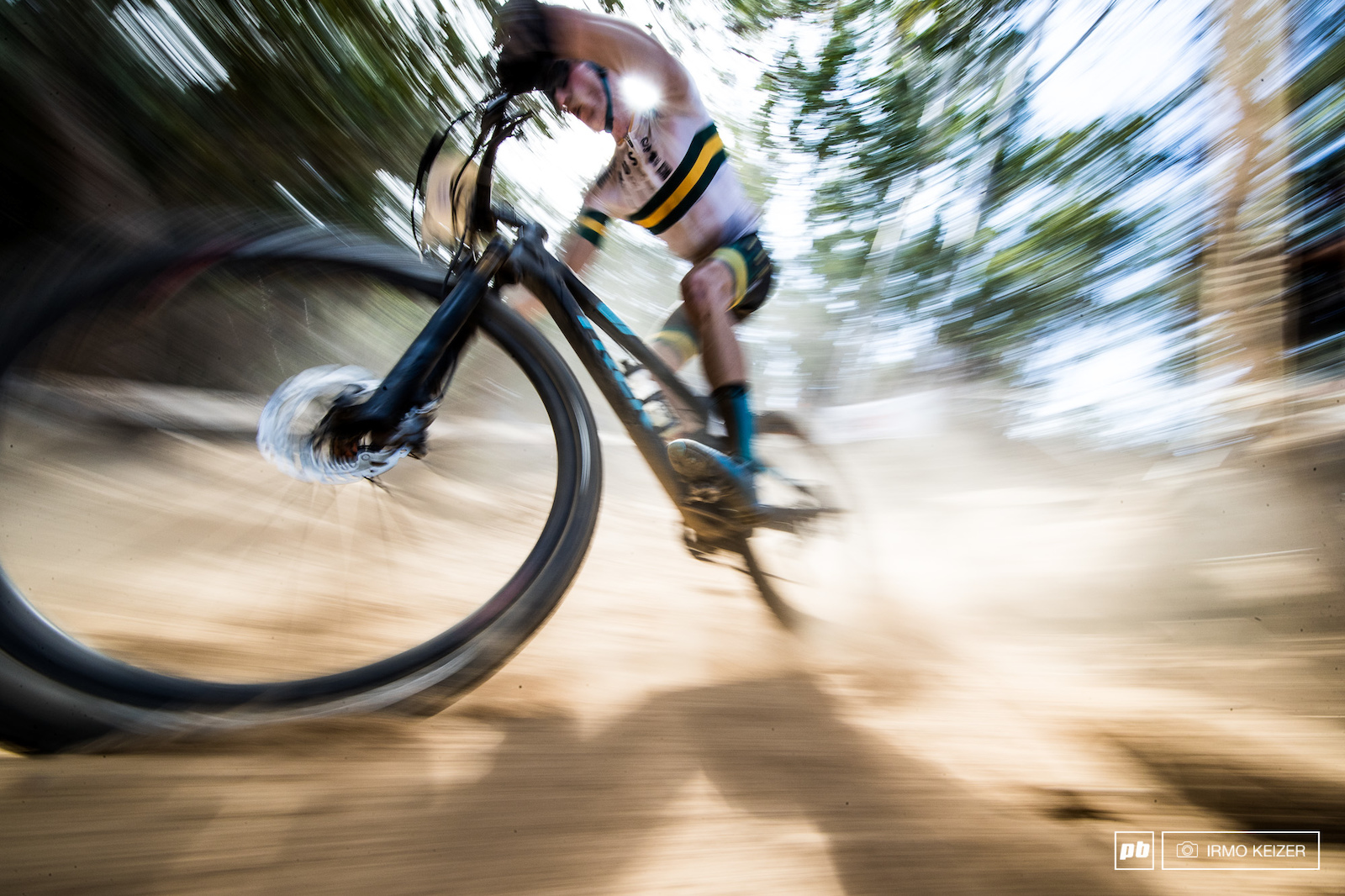 Caught behind the masses? Inhale dust. 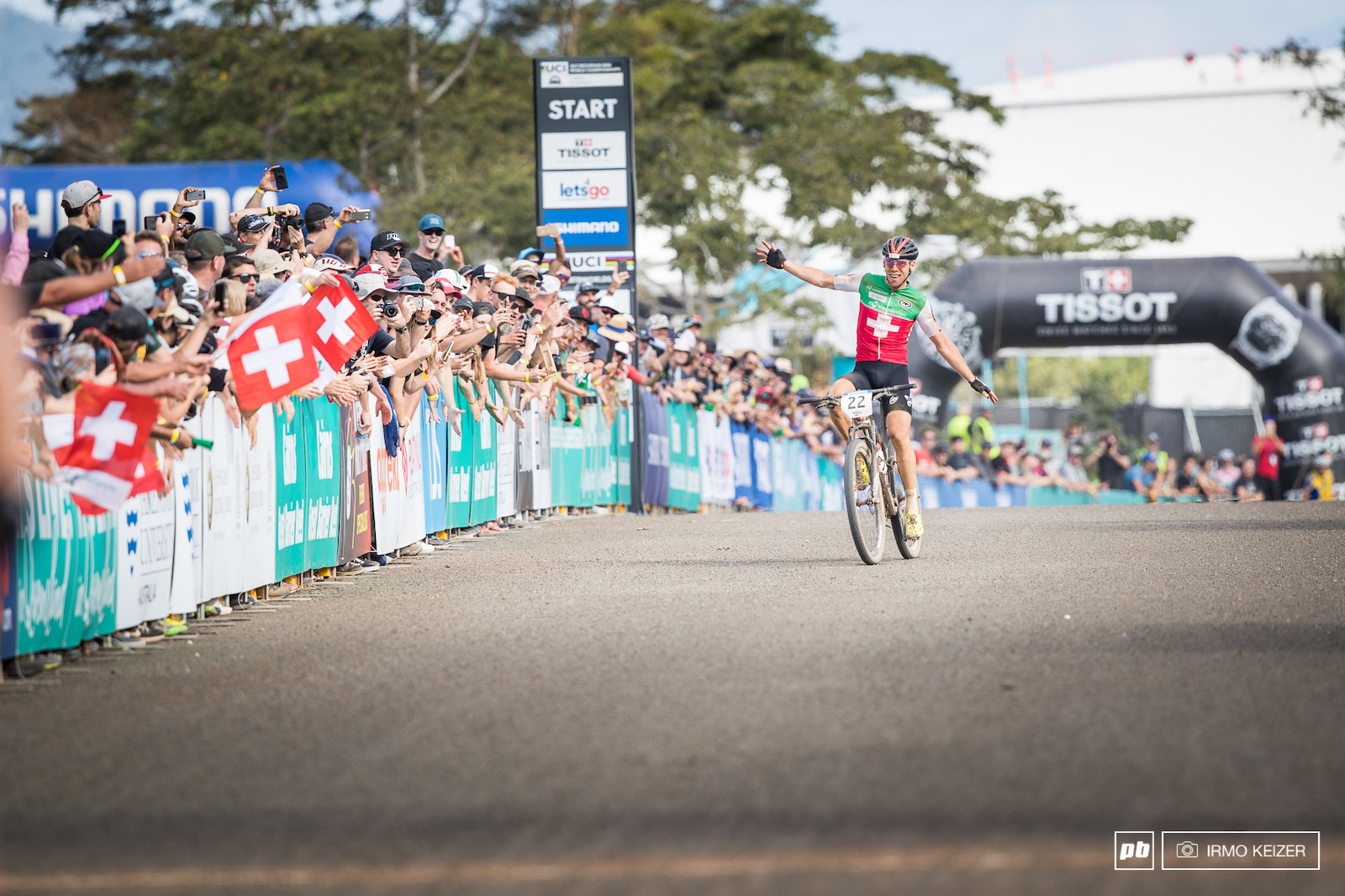 Thomas Litscher rode one hell of a race and became third. 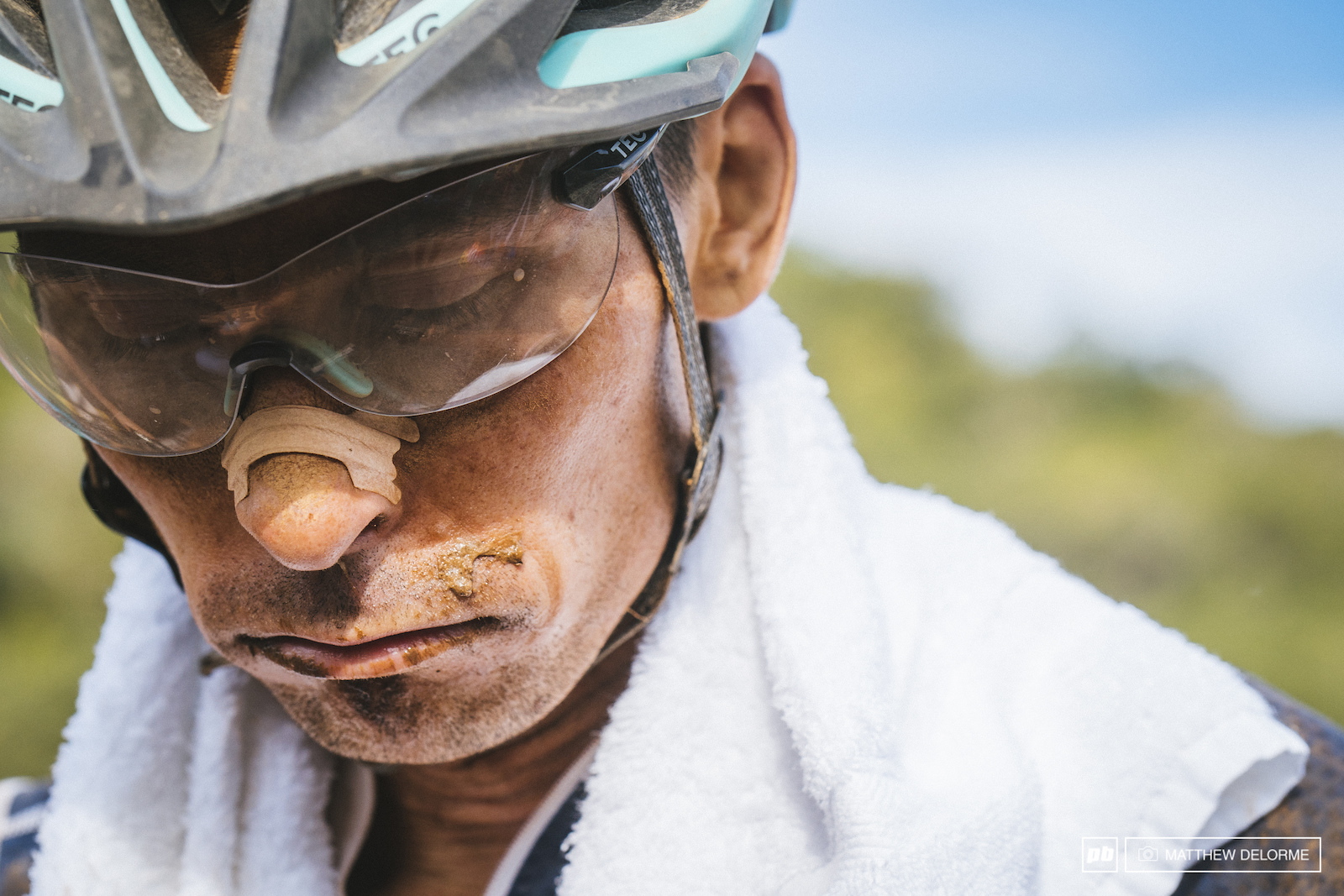 Tempier had an amazing season, but he couldn't follow up his Val Di Sole result with another podium today. 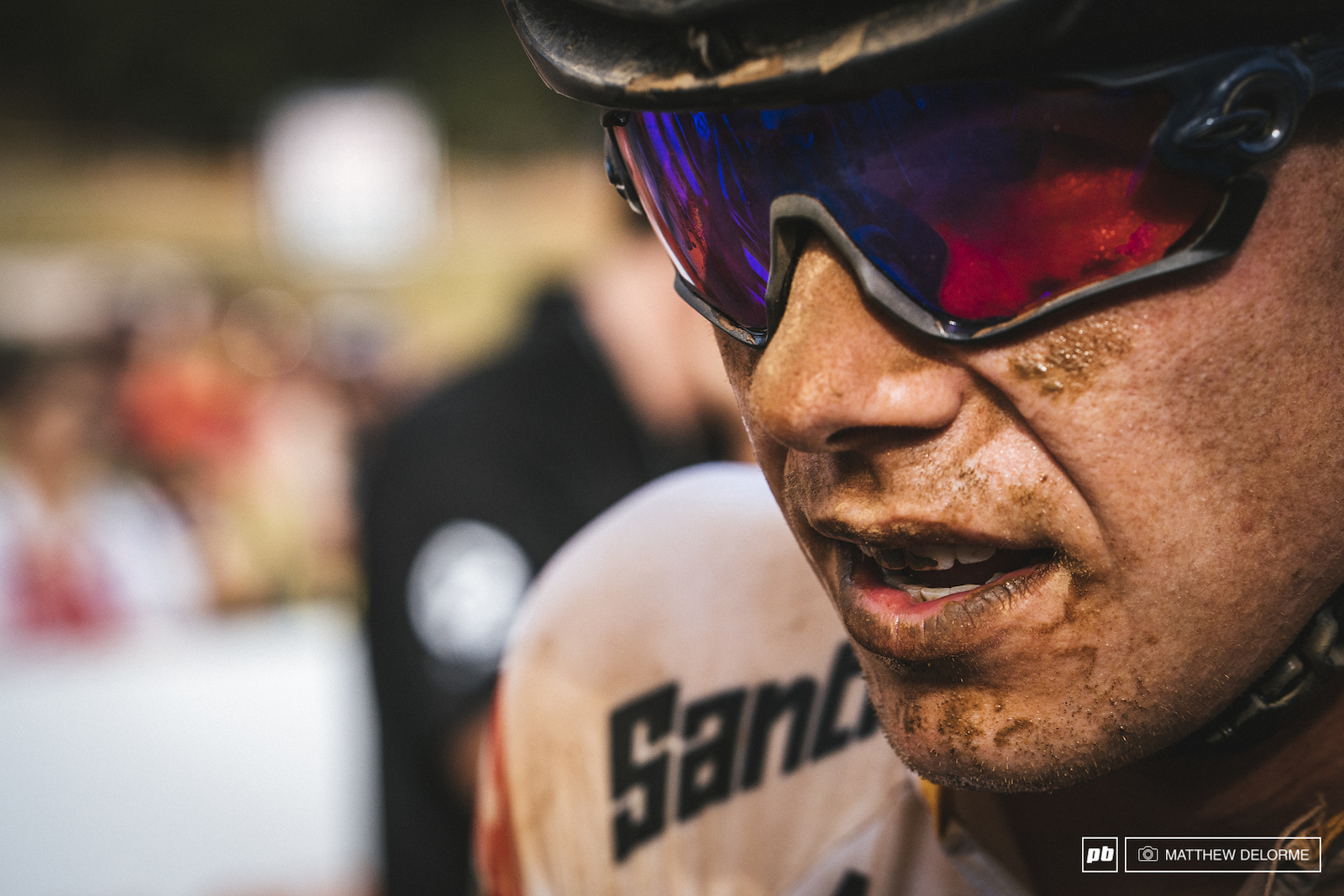 If you weren't in front you were eating dust. Literally. 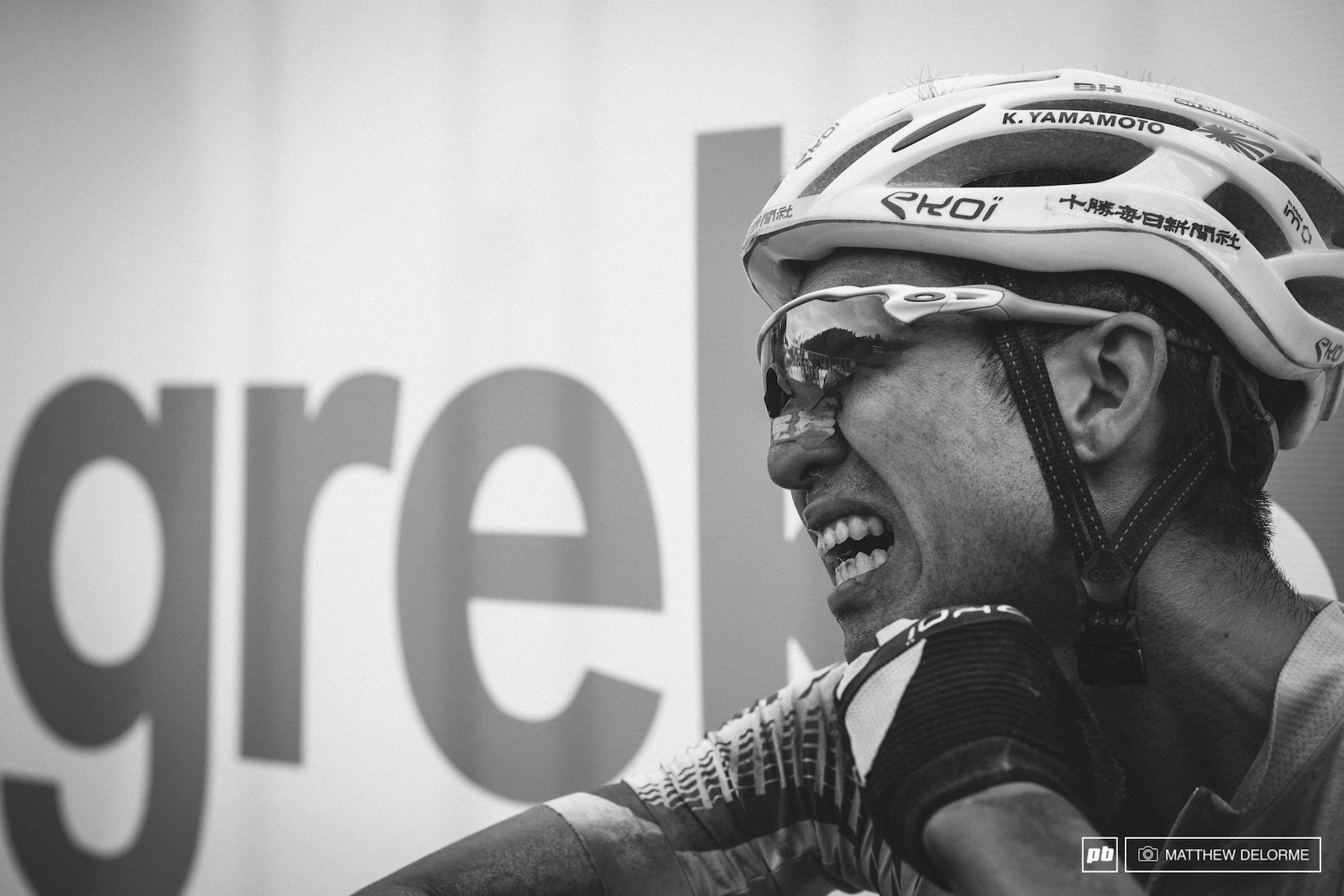 Kohei Yamamoto was feeling the burn at race end. 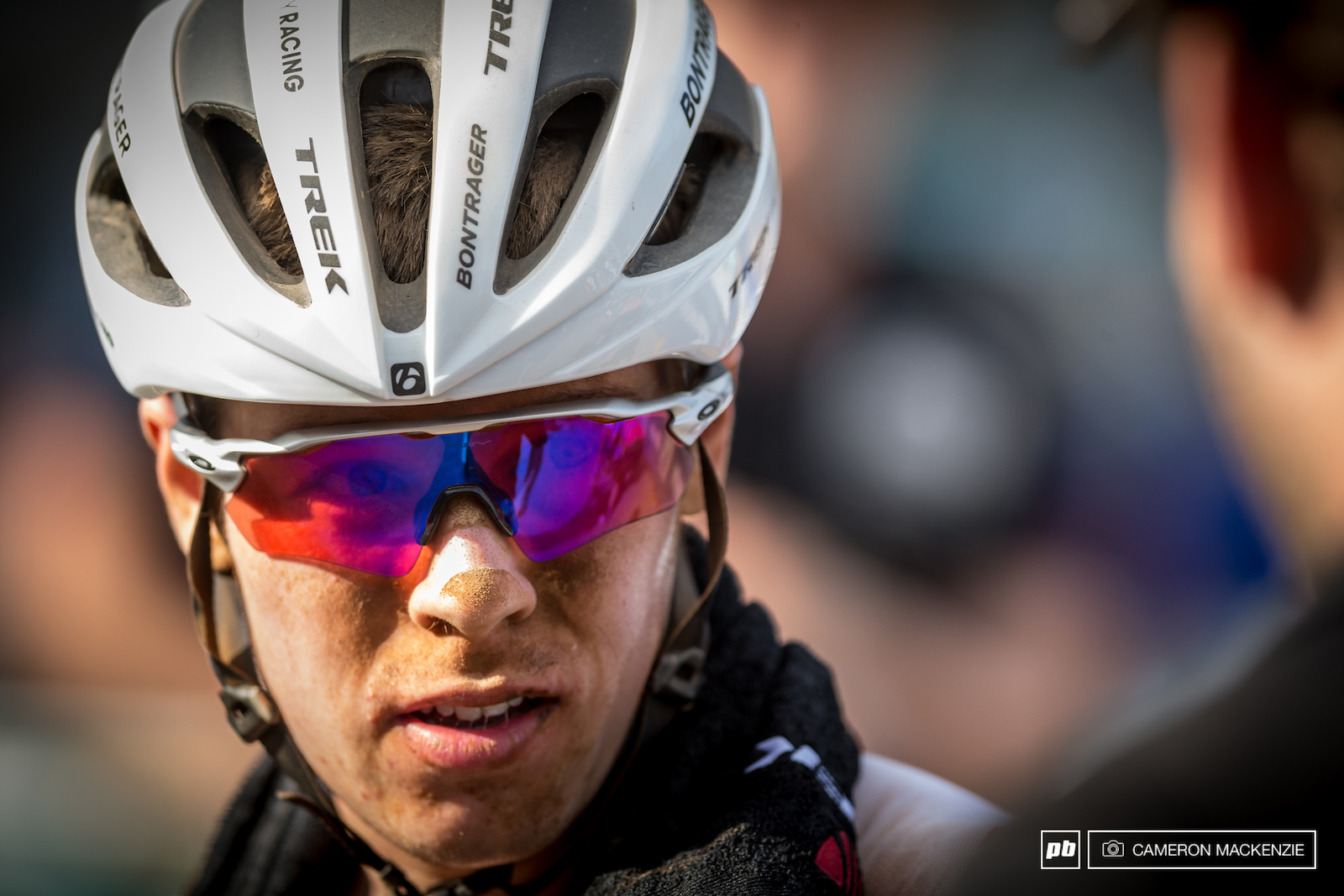 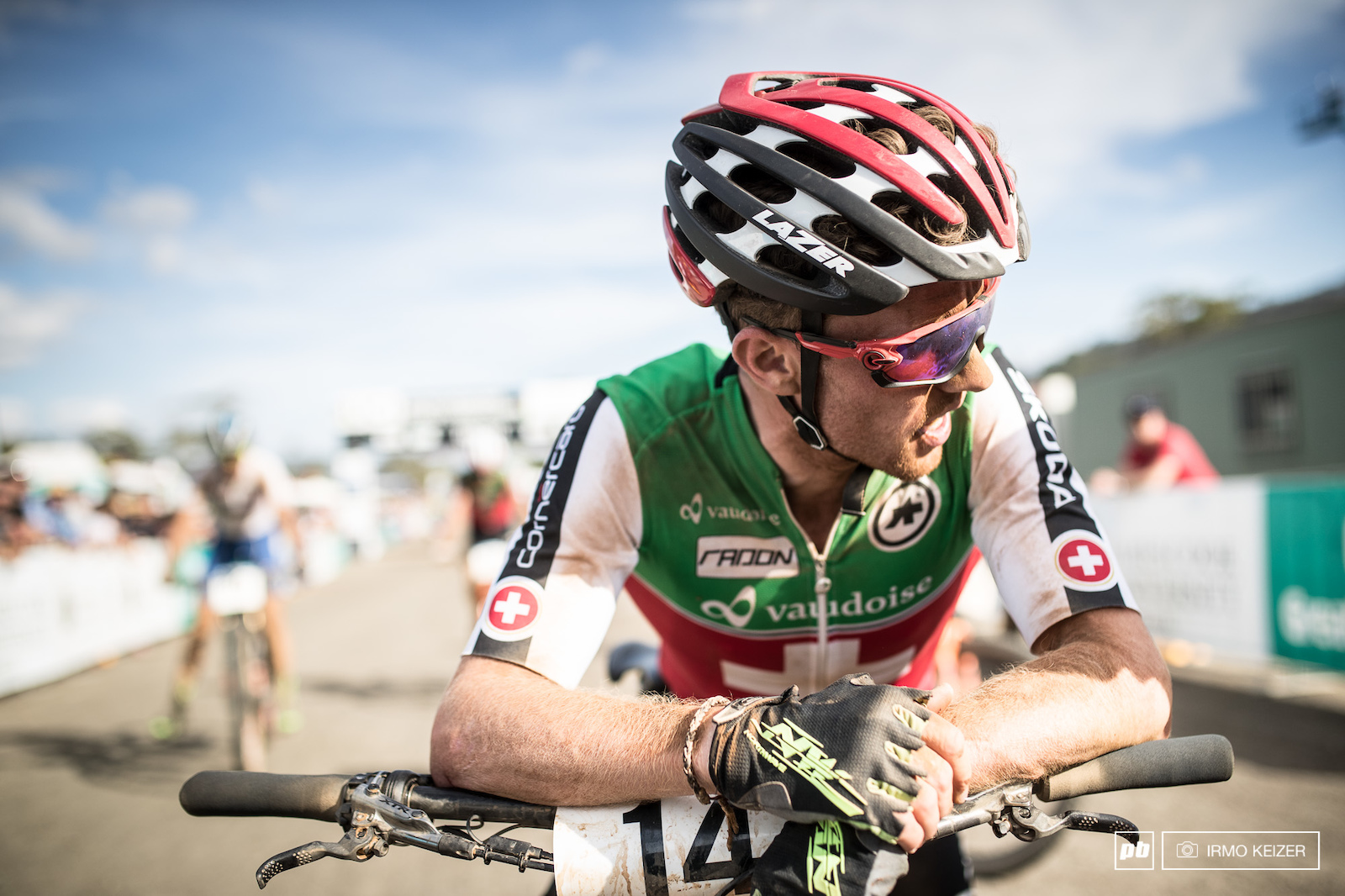 Mathias Fluckiger has been attacking all season but today ended in disappointment. Next year might prove different. 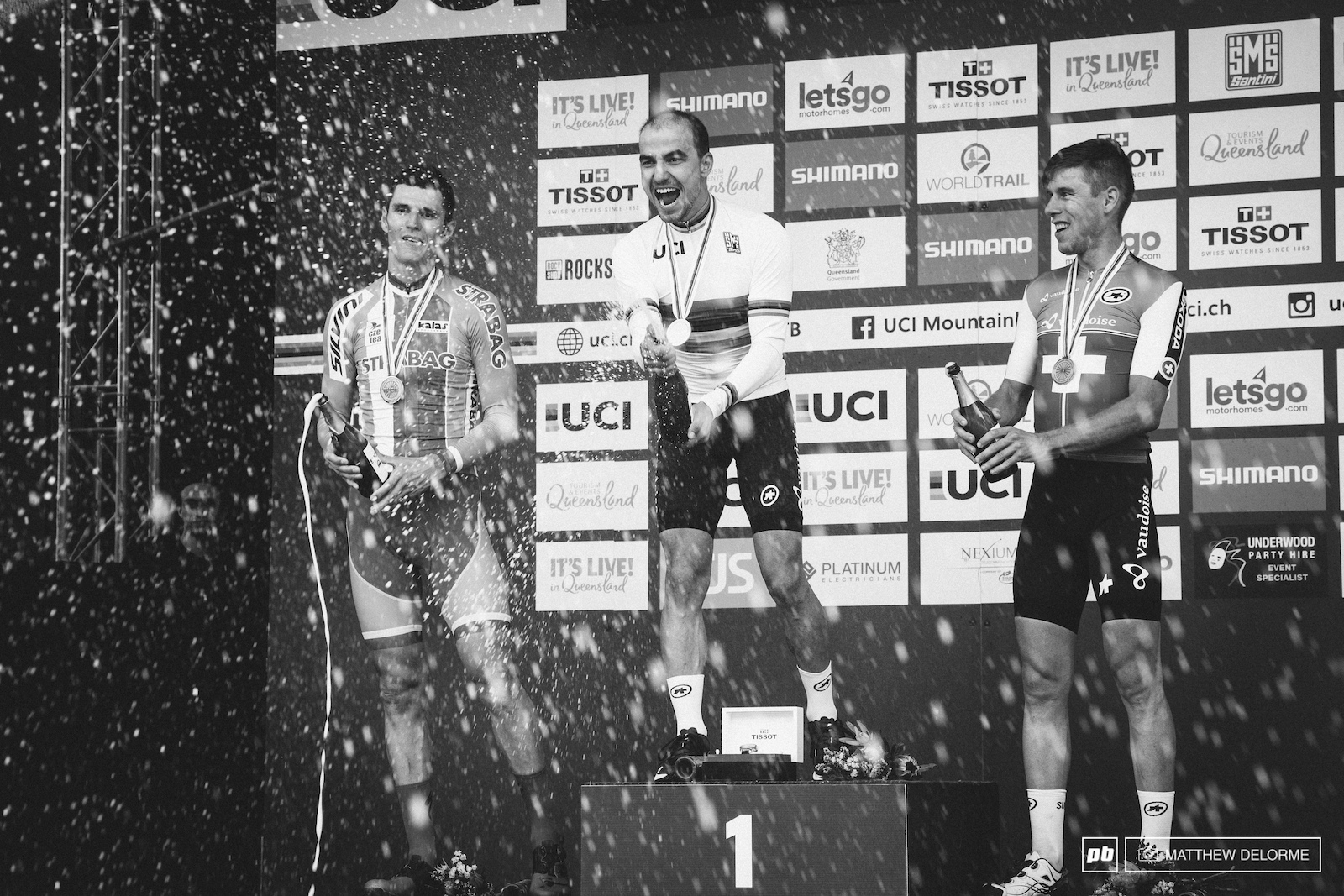 Nino Schurter has ended a perfect season. Six World Cup wins. One World Championships title. The competition seems to be getting close to edging towards a win, but so far Schurter has not budged under the pressure. Next year will prove interesting, as Mathieu van der Poel will be riding a full XCO season adding some more fuel to the fire. Will Schurter be beaten?

LaurensVR (Sep 9, 2017 at 13:21)
Nino is an absolute legend. It's insane how fast he goes up and down a hill. Doing well one race is one thing, but the guy wins everything he enters.

rcexsequor (Sep 9, 2017 at 17:03)
Couldn't agree with you more. He's otherworldly. Congrats nino on a "perfect, perfect" season! Congrats to all the riders, especially the top ten.

Already excited for next year with VDP going full time XC. He's a legit contender and possibly a future legend as well.

higor (Sep 9, 2017 at 12:40)
Avancini did an incredible job today! Everyone in brazil are really proud of him! keep pushing!

cru-jones (Sep 9, 2017 at 13:07)
Nice pictures, but unfortunately a lot of mistakes in the captions... McConnell is not Brazilian, that drop is not into Jacob's Ladder, and I am quite sure that "Absalon" is actually Carod.

ikeizer (Sep 9, 2017 at 16:46)
@cru-jones: it is what happens when you do a sixteen hour day. It would be helpful if the editors actually checked though...then it would not happen. #tip

Kiwiplague (Sep 9, 2017 at 12:28)
Jacob's ladder looks like a right b*tch to ride, especially on a non dropper equipped XC hardtail!

samjobson (Sep 9, 2017 at 14:17)
Interesting; I didn't realise that Dan McConnell had picked up a Red Bull sponsorship, changed from Trek to Cannondale, and more importantly, renounced his Australian citizenship to become a Brazilian...

dr-fishy-noooo (Sep 9, 2017 at 14:23)
Nino has done the impossible - he made XC appealing. Watching him ride with flare and style like the dh riders, absolutely awesome.

overgearedss (Sep 10, 2017 at 8:01)
Cannot wait to see a full season's worth of racing between MVDP and Nino!!! Another year of maturity and fitness for Mathieu when he is already so fast is going to make it a lot harder for Nino to dominate like he did this year.

sc213626 (Sep 9, 2017 at 18:12)
Did anyone catch the moment during podium ceremony where Kulhavy was on stage first, standing center and waving at the crowd, and then Nino walk up and pointed to the second-place spot and seemingly telling Kulhavy to get to his spot?

Downhill-Dougie (Sep 9, 2017 at 15:40)
The photo launching into Jacobs Ladder is actually not Jacobs Ladder, rather Rodeo Drop!

apcastagno (Sep 11, 2017 at 10:29)
I still can't understand why they don't put dropper posts on. I'm all about weight savings, but couldn't imagine descending with that seat that high. These guys must have it figured out.

xcahole (Sep 9, 2017 at 21:55)
Faster riders are faster, and as you can see most of these riders think droppers are mostly for guys that want to look cool with the seat slammed as they wait for their truck shuttle. Having a dropper is easier to move around on for sure, but the proof is that they are not faster, for a big pile of mountain bikers out there. Don't you think every one of the WC XC racers has tested a dropper on their race bikes and you can see that most have opted out, if they were actually faster they would be using them. Also, since they are fit, they can move behind the seat any time they want without their enduro girdle and fat belly draggin on the seat. One thing I see all the time is dropper post riders SITTING hahaha on their dropped seat and wobbling their slow asses down the hill, see first sentence. Well if you are sitting on your dropped seat, your CG is still substantially higher than one of these athletes that looks like they have a seat up their anus, which of course it is NOT up their anus as they basically have their weight on the pedals.

RLEnglish (Sep 9, 2017 at 23:33)
100mm suspension and skinny tires. Or even a hard tail. I think these guys have reached the bikes terminal velocity without a dropper.

cru-jones (Sep 10, 2017 at 1:22)
Actually a lot of guys and girls are on dropper posts these days. And having worked with a few of the best XC riders, it is actually already difficult to get them testing something new as long as none of the other fast riders are using it. And then often the testing and decision ist just based on feelings, not facts. Nino is so good at descending with a high saddle that it probably would not make a big difference for him (it took him quite long though to realize that 29er and tubeless are faster than 27.5 tubulars). But for a big portion of the riders I am quite sure it is faster to use a dropper.
And for your CG it is totally irrelevant whether you are seated or standing.

fullfacemike (Sep 13, 2017 at 1:23)
The longer you stare at the podium photo the weirder the whole thing gets.