The Enduro World Series (EWS) has become synonymous with epic locations. By the end of this season, the series will have visited 15 countries across four continents in its short tenure. In order to keep uncovering the world's best destinations, the man behind the series, Chris Ball, scours the globe looking for the hottest new trails. It's a tough job, but someone's got to do it. For the first time, Chris has allowed us behind the scenes access to this deeply scientific, highly technical and incredibly complicated process. Join him as he takes on the terrain around the legendary Swiss resort of Zermatt, where the series will crown its champions in 2019. Guided by a well known local rider, check out this exclusive documentary as the pair detail the very serious business of scouting out potential new EWS venues. 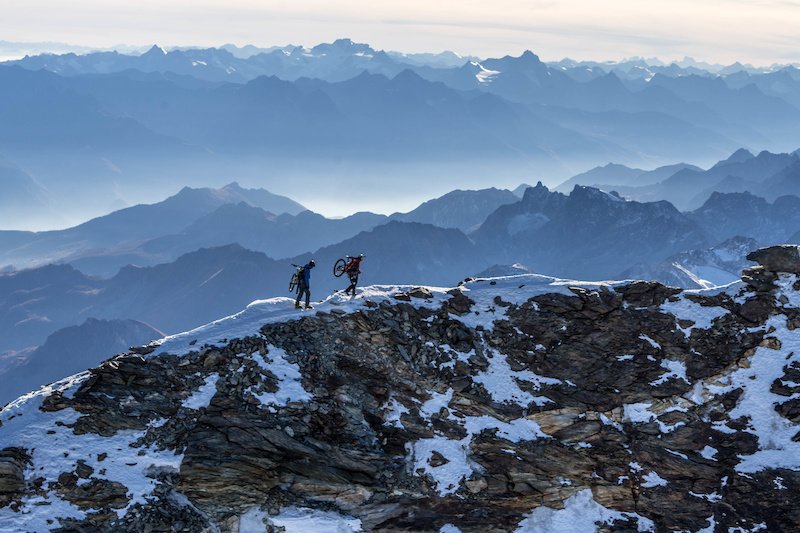 Kiwikev (Feb 22, 2018 at 23:43)
I met Chris on the Flight from Auckland to Melbourne between EWS Rotorua and Tasmania last year and yes it's an amazing job he has but it consumes an extreme amount of his time away from his loved ones - that's the sacrifice that's often made to do something that you are so passionate about but it shows in the amazing locations and trails that he brings to us (and the EWS racers) year after year... so thank you Chris and your team from all of us!

After watching that, this first thing that popped into my head are "Chris knows how to draw people in".

I can't help but think that we could see EWS starting to enter the fringe of mainstream sport in the next couple of years.

If Chris and the EWS can find more locations that permit good quality filming (camera positioning and appealing landscapes), the event will become more marketable to a wider audience.

Drover (Feb 22, 2018 at 21:20)
Your comment reminds me of growing up watching the tour De France on sbs, didn't matter if you were following the race or not, you had a moving image in the background of an amazing French landscape each night for a month

vinay (Feb 22, 2018 at 11:16)
Cool job but I guess best is to leave it to the locals. Trails conditions can vary so much during the season that what may seem like a muddy mess in winter turns out to be the most perfect hardpacked trails in summer whilst what may look perfectly nice and rideable in winter turns out to be a loose sandy mess in summer. You can trust big rocks will consistently remain big rocks but even then they may or may not be mossy and slippery when you want to race. That said, Chris Ball deserves this job. He's done enough for mountainbiking. Turning him into a poor UCI delegate doesn't do him justice.

nprace (Feb 23, 2018 at 5:30)
I'm fine if they stay over in Zermatt as those trails are maintained but, don't even think of going anywhere near the natural trails in Valais...that would be the end!

VT2wheeledlife (Feb 23, 2018 at 6:38)
I love DH, but damn am I hoping Chris Ball and the EWS put an end to the UCI monopoly. The EWS feels more like for riders by riders. Great work all involved!

pedaler (Feb 25, 2018 at 15:59)
ha this is hilarious. I used to compete on the Ice Climbing World cup with Sam and his brother, they were just we sprogs then and crushing it. I'll be sure to look Sam up when I'm over there again. And I hope he does with me if he comes to my region in Canada.

Dustfarter (Feb 22, 2018 at 10:13)
Movie Trailer guy is so distracting. They do so many things well but then throw in weird curveballs of crap like this voice over or "Mr Scraggles" as a presenter...or whatever his name was last year.

drivereight (Feb 22, 2018 at 17:53)
Keep the racing in extreme weathers or 3rd world regions to see if these racers are truly enduring the conditions!

Jamessquarestuff (Feb 24, 2018 at 4:33)
When is Queenstown finally getting the EWS? Thats what I really want to see.

jefe (Feb 23, 2018 at 9:14)
Well shoot, there goes that videographer's career. Here he was trying to make a serious documentary and boy did he fail.