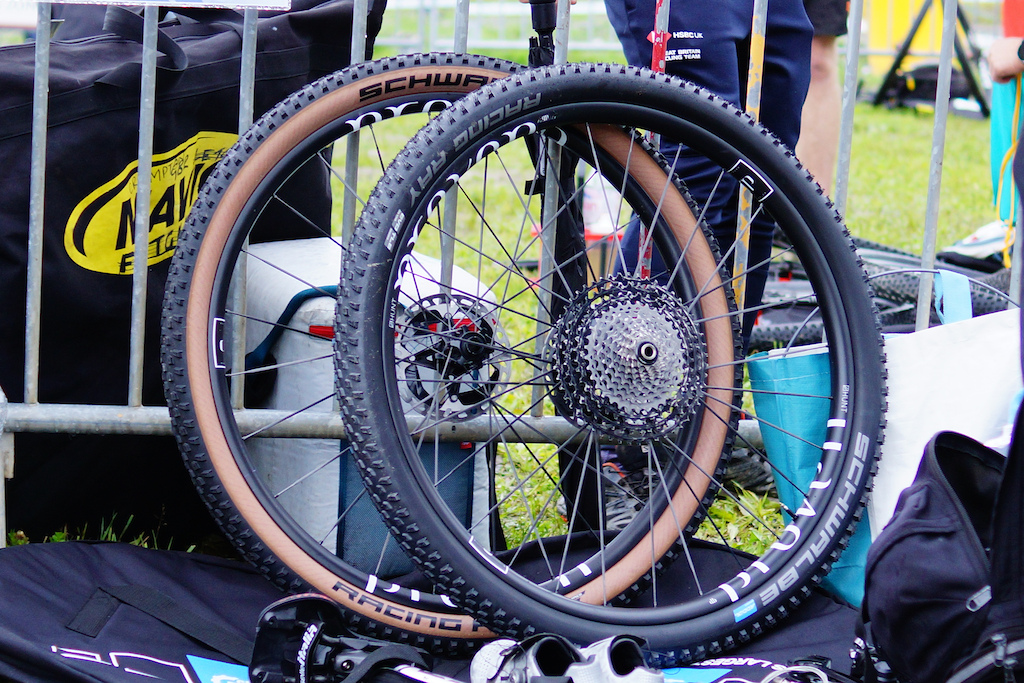 The World Cup pits are rife with new and unreleased tech, so it's no surprise that a pair of prototype Hunt wheels have been spotted on Isla Short's bike. Hunt is keeping its cards close to its chest when it comes to this new wheelset, but we do know that this will be the UK company’s first carbon XC wheels when they eventually hit the market.

The most recent version of the wheels that Isla Short was testing was rumored to have 26mm internal width rims, 24h and 28h on the front and rear respectively. Brand manager Sam Meegan says there have been several iterations and Hunt has been playing with different rim and spoke combinations until the formula is just right, which explains why we’ve seen a few versions with different graphics. For now, we probably won’t know much more, though the straight-pull bladed carbon spokes are intriguing.

The wheels seem to use a similar spoke system to some of Hunt’s road wheels. Hunt’s TaperLock system – which has so far been limited to road bikes – allows the spokes to be tensioned with a spoke key on a nut at the rim bed, accessible through the spoke holes. This makes the wheels as serviceable as those with standard steel spokes, but with the benefits of carbon. Hunt claims a 30% increase in stiffness over comparable steel spokes and says that the carbon-spoked road wheels have 6% more lateral compliance than comparable steel-spoked ones. For reference, the road spokes weigh 2.7g each. While the mountain bike version is likely not identical, it's been hinted that it will rely heavily on the blueprint of this already-established design. 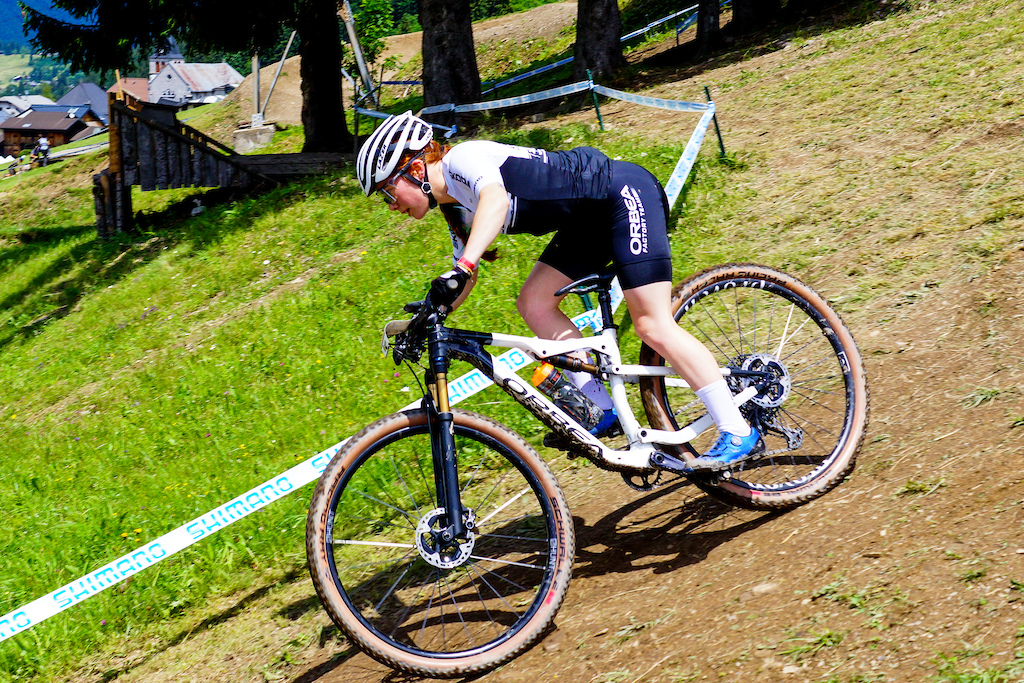 We don’t know when we’ll see the final version of these wheels, but they seem to have been in development for a while, as Isla Short has been testing them for about a year and actually took 5th place at World Champs on them last fall. There may well be multiple versions on the way, too, as the official line from Hunt is as follows:


We'll let you know when we know more. 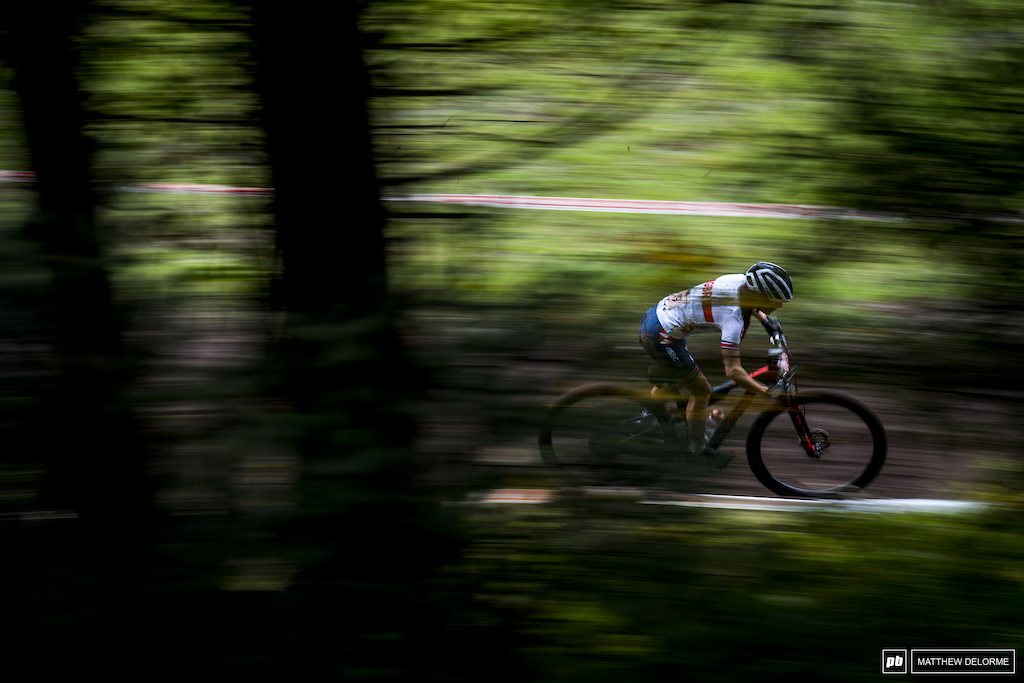 KK11 (Jul 16, 2021 at 15:13)
“We don’t know when we’ll see the final version of these wheels, but they seem to have been in development for a while”……Sign up now as a premium member to be notified of their release date and save 10% on your first order.

But seriously I hope some exec at Outdoor is looking at comments. I hope it’s caused a meeting.

JustAnotherRiderHere (Jul 18, 2021 at 13:26) (Below Threshold)
@usedbikestuff: As a business owner, I can assure you, they do not care what we have to say...there is but one thing...clicks....kinda like the liberal media. facts be damned.

usedbikestuff (Jul 19, 2021 at 5:03)
@JustAnotherRiderHere: I’m going to just assume by “liberal” media you’re including all media outlets, even conservative ones and their liberal use of facts and science

usedbikestuff (Jul 19, 2021 at 5:05)
@JustAnotherRiderHere: but in all seriousness, living on the other side of the wall, you’d be surprised how many meetings had a PowerPoint with a pinkbike comments section snippet in it… real helpful for requirements gathering and voice of customer

JustAnotherRiderHere (Jul 19, 2021 at 8:29)
@stumphumper92: Soon enough the word "Hypothesis" will be gone...already it is dead...idea and fact are synonyms, right?

ABhardtail Outside+ (Jul 16, 2021 at 15:43)
"Hunt claims a 30% increase in stiffness over comparable steel spokes and says that the carbon-spoked road wheels have 6% more lateral compliance than comparable steel-spoked ones."

Wouldn't vertical compliance and lateral stiffness be more desirable than the reverse? Asking for my own understanding, not as a criticism.

swenzowski (Jul 16, 2021 at 16:02)
yeah the Zipp 3zero moto wheels are advertised in an opposite way to these, more vertical compliance but still retains lateral stiffness, helping you hold your line. Maybe XC peeps are different, I'm just a gravity goon.

DizzyNinja (Jul 16, 2021 at 21:54)
Some movement laterally allows the tire to maintain traction rather than be forced into a skid from the same input

DizzyNinja (Jul 17, 2021 at 6:16)
@irck: it all depends how much movement is designed into the wheel. Our brains tend to want more of a “good thing”, when a wheel flops like a soft taco we obviously want a stiffer wheel, then we want more until the ride is ruined. Then Hunt says it’s more compliant than the stiffest wheel we’ve tested and ppl panic that it’s a soft taco again but it isn’t. It’s the right amount of compliance for certain riding conditions. Obviously there’s times you’ll want more lateral stiffness, but you don’t always.

conoat (Jul 19, 2021 at 0:35)
@irck: guys have been going back to AL wheels from carbon in enduro for sometime, claiming they track better BECAUSE they are less stiff. There is some merit to this idea, but it's clearly a fine line. Think about a Super Bike chassis. they are designed to have a bit of lateral flex to them so they can absorb bumps in the road when leaned over at 50º. the sus can't really do it's job when it's that far off it's plane of movement(totally vertical). Same is true in MTB, to a lesser degree of course.

hamncheez (Aug 12, 2021 at 9:59)
@swenzowski: I don't know how vertically compliant/horizontally compliant Zipp rims are, but thats not their advertised feature. It is "yaw compliance", or roll. Like rolling your ankle.

Danzzz88 (Jul 16, 2021 at 15:05)
Pointless and expensive.. the Berd polymer spokes are a better solution if you don't want to use normal spokes.. Stronger, lighter, more impact resistant and more compliant reducing vibration and chatter...and although expensive compared to regular spokes, I'm willing to bet they will still be cheaper than these carbon ones. Imagine a large twig getting caught in these carbon spokes, they will snap like match sticks... At least metal and polymer bends, carbon is all or nothing, it may be stronger to a point, but past that point it's game over, spokes are the last place I would use such brittle material.

felimocl (Jul 16, 2021 at 16:28)
I've found hunt wheels awful to work with. The past 2 sets that have come through my workshop have both have the same problem of the spoke tension being far too high and the nipple pulling through the carbon. They also are the most loud obnoxious sounding hubs I've worked on, can't imagine actually owning them

swenzowski (Jul 17, 2021 at 4:19)
@felimocl: I made the mistake of buying the Carbon Impact wheels due to price point and availability, and I broke two rims in two weeks. Super weak carbon.

Good customer service though. Maybe they'll figure it out in the future.

Bentonvillebicycleco (Jul 17, 2021 at 12:52)
@madmon: Ive replaced hundreds as a shop mechanic over the years.

madmon (Jul 17, 2021 at 13:22)
@Bentonvillebicycleco: must have been lucky and I am a careful rider mostly and only one bud had a broken blade. I have had J spokes snap by themselves in storage over the summer in Jamaica one year I showed up and there was 14 spokes on the bottom of my iron case from an Easton hoop

browner (Jul 17, 2021 at 12:41)
Everytime lol everything above this is the emperor's New clothes and for outsider subscribers only

abbottt1 (Jul 16, 2021 at 19:04)
Twice I've tried to buy Hunt wheels, and twice I've been subjected to the ever-lengthening "will ship X week of X" to the point of eventually just cancelling the order. Someday I'd like to actually complete a sale with them, but in my experience they're happy to take your deposit, but loathe to actually fulfill your order. Always sketches me out when a company promises deliveries it can't live up to.

kajones (Jul 17, 2021 at 2:10)
Hot tip though - if you do ask to cancel your order, in my experience they offer a free pair of tyres. Following an actual cancellation they offer you £30 off your next order!

JohanG (Jul 17, 2021 at 5:46)
"Hunt claims a 30% increase in stiffness over comparable steel spokes and says that the carbon-spoked road wheels have 6% more lateral compliance than comparable steel-spoked ones. For reference, the road spokes weigh 2.7g each."

Pinkbike editor with Dr. Evil hand gestures "If we cram together enough techbuzz words they won't notice how none of these statements relate to each other heeheeeheehahahah"

mr-smashy (Jul 16, 2021 at 16:07)
Hunt wheels or Outside subscription? Decisions, Decisions. I think I'll take that bag of Beef Jerky instead.

rivercitycycles Outside+ (Jul 17, 2021 at 6:47)
@mr-smashy They can start by putting this advertisement behind the paywall.

speedy-fox2 (Jul 16, 2021 at 23:06)
Actually, I know quite a lot of people, who have their 4x, pumptrack, or even enduro bikes laced with Sapim CX Ray aero spokes. Very strong wheelsets, but they flex nicely.as well.

Hunt is clearly claiming a 6% lateral stiffness increase in their own material for their road wheels, despite less weight and fewer spokes:
us.huntbikewheels.com/blogs/news/lateral-stiffness-testing-steel-vs-carbon-spokes

Compositepro (Jul 16, 2021 at 15:52)
One place i cant ever think a small section relatively fragile material is a good idea

Compositepro (Jul 17, 2021 at 10:59)
@radrider: bizarre isnt it we can stop a bullet with a 9mm thick plate but spokes even im struggling to see where the fun is going to be in that

Marcencinitas (Jul 17, 2021 at 5:57)
No roadie has ever wanted more lateral compliance in their wheels.

billygoatjohn (Jul 17, 2021 at 11:09)
Bladed spokes are garbage for mountain bikes look forward to a bunch of broken ones if you buy them.

In other news, I’m sure you guys all thought long and hard about the decision to sell pb, and at the end of the day, it’s not up to us and it’s probably not up to most of the editors either. I think the reason we are all so disappointed is that PB gave us a platform to feel connected to a community of mountain bikers. Somehow it felt like it was ours a little bit. (At least the comments section). I’m sure you guys will talk about it more in a podcast etc, but it feels like you got cocky and thought now that we as a community are reliant on the site, you can rake in big money off us, and it feels a bit like a betrayal. I think one of the key ingredients to PB that made it such a success was that it was free for all and there wasn’t a subscription needed to be a part of the club. Now it feels like an exclusive club that none of us are invited to. Anyways… happy Friday

short-but-sweet (Jul 16, 2021 at 15:21)
I’m not so offended by having to pay if it keeps the site and culture alive. After all, we pay for Trailforks. Monetisation of previously free sites is rife, and seems to be somewhat inevitable. I give monthly to my local trails for upkeep and and improvements, and the work they do is amazing. Point is, giving a little to your Mtb community is ok.

Personally, the main problem I have is who it was sold to.

jaame (Jul 17, 2021 at 0:25)
@short-but-sweet: there are a million little subscriptions I could pay for to the tune of hundreds of pounds a month. They are all superfluous. Riding bikes is why I'm here. Reading about them and talking about them just fills the time between rides. It is absolutely not worth paying for that time filler. There are ten other sites like this one... We just need Enduro MTB to add a comments section. How hard can it be?

short-but-sweet (Jul 17, 2021 at 2:11)
@jaame: perhaps you are correct. I choose to limit my extravagances to Mtb alone, so a small extra subscription wouldn’t be too much of a burden for me. I guess that’s a personal point of view, and I take yours into account
Post a Comment