Join Pinkbike  Login
…but it quite often pours. Last time the iXS European cup visited Scotland it was to blue skies and a dry and loose track. Ok, it may have rained a few times but comparably speaking, it was mere drizzle. Compared of course to this weekend when iXS returned to Innerleithen for the third round of the 2012 series. 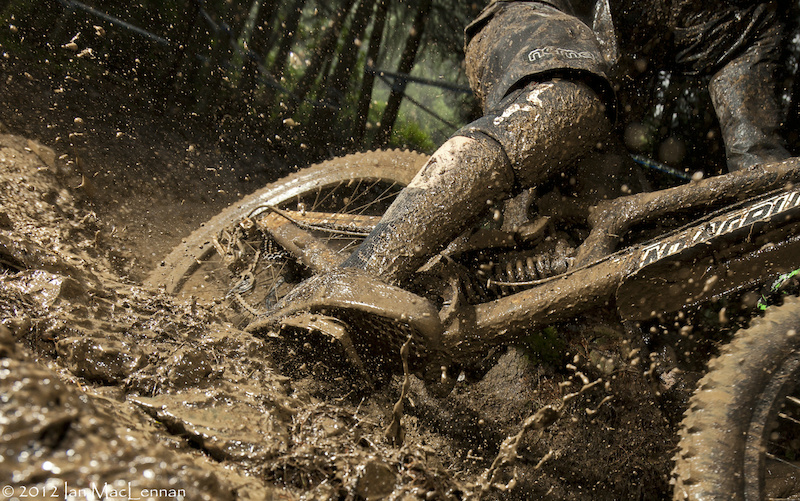 Thursday was pretty dry, tacky in the woods and a bit damp in a few spots, but definitely conditions to warrant dry tyres. But we weren’t riding on Thursday, Thursday we were drinking in the pub. Friday afternoon was when the riding started and so it was before first light on Friday morning that the rain started, and started hard. It continued in this vein too, barely lifting all day, which made for some ridiculously muddy course conditions, but conditions which were also giggle inducingly good fun to ride. It was the sort of weather where you have no option but to stick on the spikes, load the tear-offs up onto your goggles and get out into it, preferably with an all in one set of waterproofs and a jet wash for when you’re done. 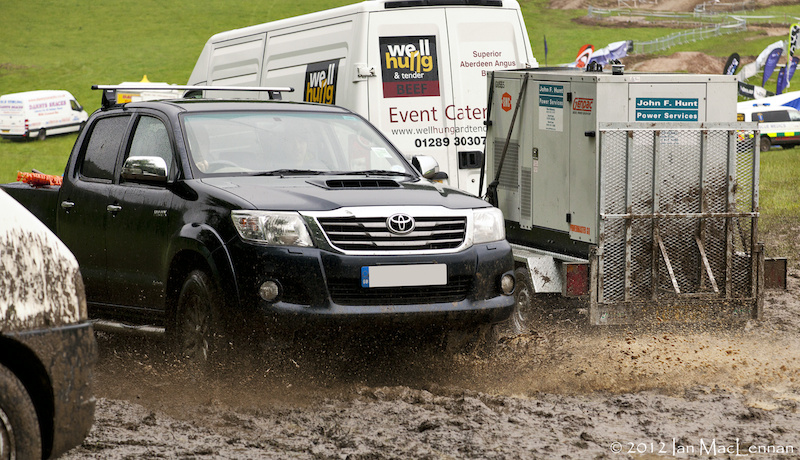 It was dry and dusty this weekend... 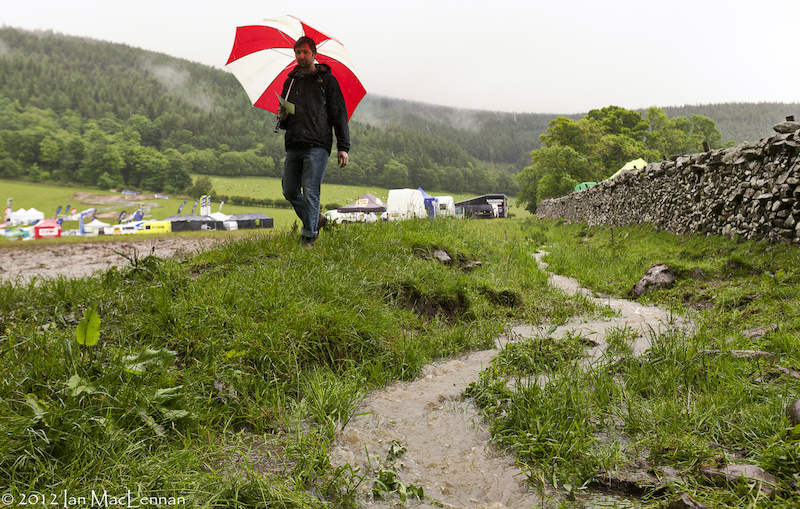 ...and so sunny that you needed your umbrella.

Friday practice at iXS is always pretty chilled out, with few riders going for maximum runs and instead rolling, looking at lines and getting the track in their heads. Having spent the early afternoon walking, and with not many riders too enthusiastic to make the transition from warm and dry to cold and wet, the number of practice runs were low. Just two to three seemed the average with a bit of sectioning to try out options on some of the more awkward sections between the tapes. 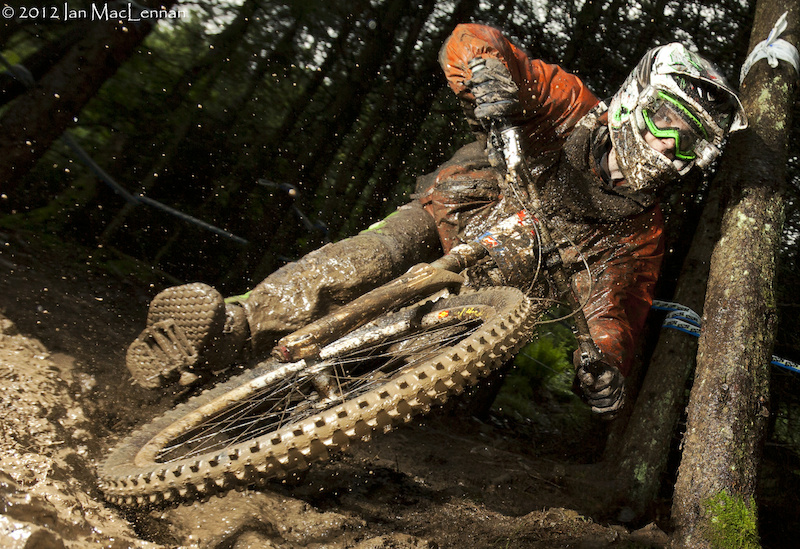 By Innerleithen standards the iXS cup track is a special one. Built purposefully for the 2010 event, it was laid to bed until a short time ago when it was uncovered from the brash that kept it well hidden and un-rideable, and the woodwork also re-instated for the gaps across other, more permanent trails. It’s a real shame that it can’t be ridden at other times but then that is also its attraction; drops and jumps are the anathema of Forestry Commission trails, so it’s all the better when you find a course which includes them. Featuring some new lines, perhaps the biggest talking point were the jumps in the field. Looking great on Thursday, come Friday they were so soft that very few riders were clearing them, and they became one of the earliest casualties of the conditions. A shame given the effort that was put into building them. 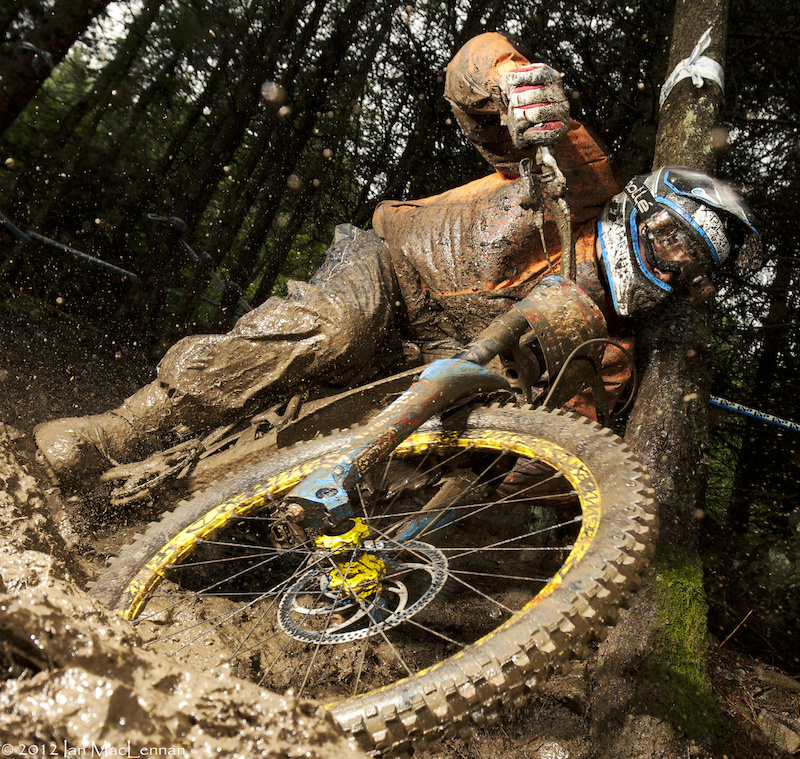 Saturday was more of the same, but with more riders on the track, there was a cleaner rut as the surface became chewed up by hundreds of pairs of Wetscreams and Dirty Dans, among others. So wet, it was as if someone had opened a tap for liquid mud and set it to run down the track. No respite from it, the first few hundred yards were just a minefield of deep ruts running almost straight down the fall line, leaving nothing for it but to lean back, stay off the brakes, and plough on through. Roots then also proved a problem, becoming exposed as the bark peeled away to leave greased stripes across the course which stayed under the radar by being coated in mud. 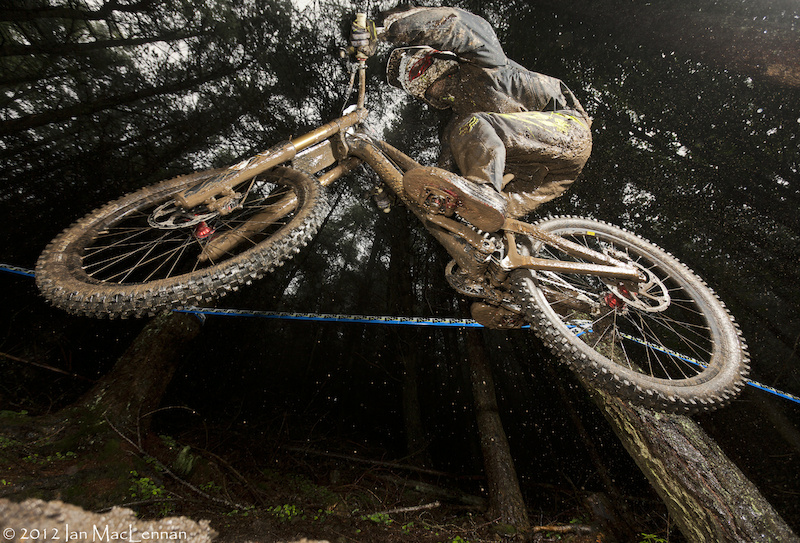 Within sight of the start there was a need to pull your first tear-off but in conditions so wet and muddy, the art is in preserving them, balancing needs now with the need to grab a clean view further down the track. Not that there was much of a view anyway, with mist in the forest creating an eerie and certainly impenetrable line of sight where trees quickly disappeared into the murk. 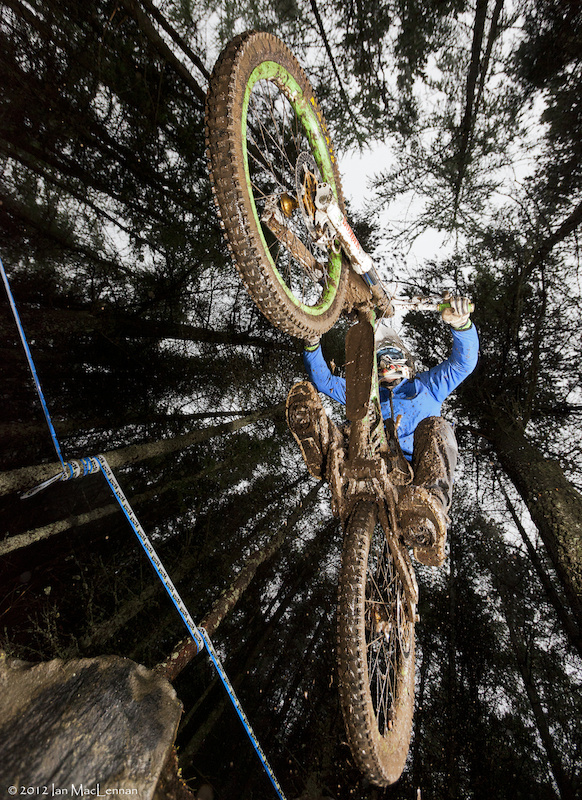 Answers as to who this is on a postcard. 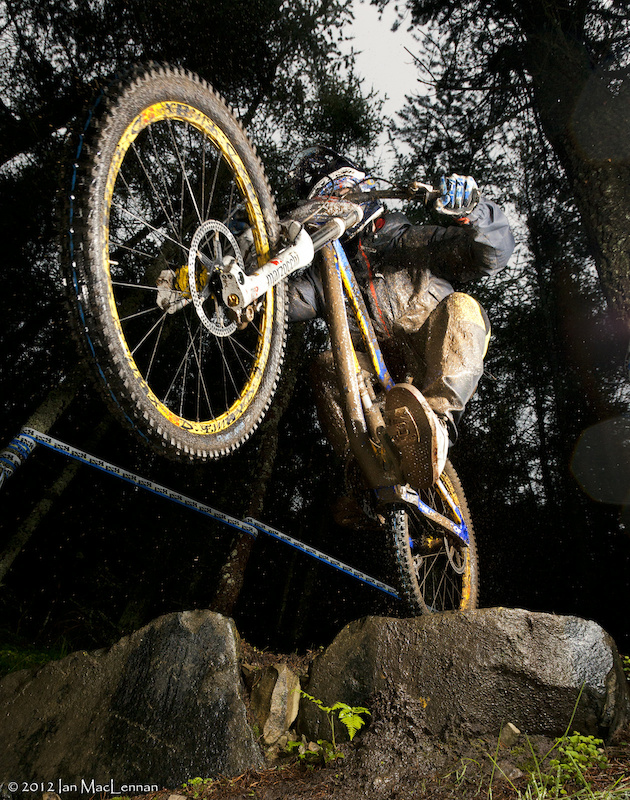 Seeding on Saturday was lively and featured riders battling not only the elements on track, but also the elements at the top where it was a losing battle at times to keep water from creeping under the goggles, leaving you with a steamed up mess to look through for your run. There were plenty of the expected big names going down in the mud, all too easy to tell they had too, coated in the brown slime that pervaded every single surface within five feet of the track; trees, rocks, photographers. They all had a coating of brown Innerleithen ooze. 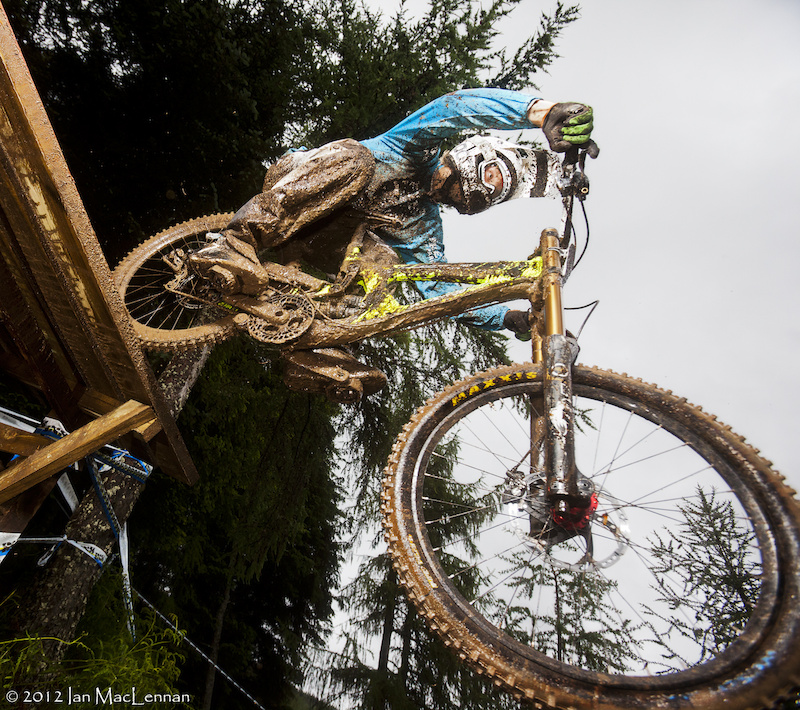 One of the Swedes 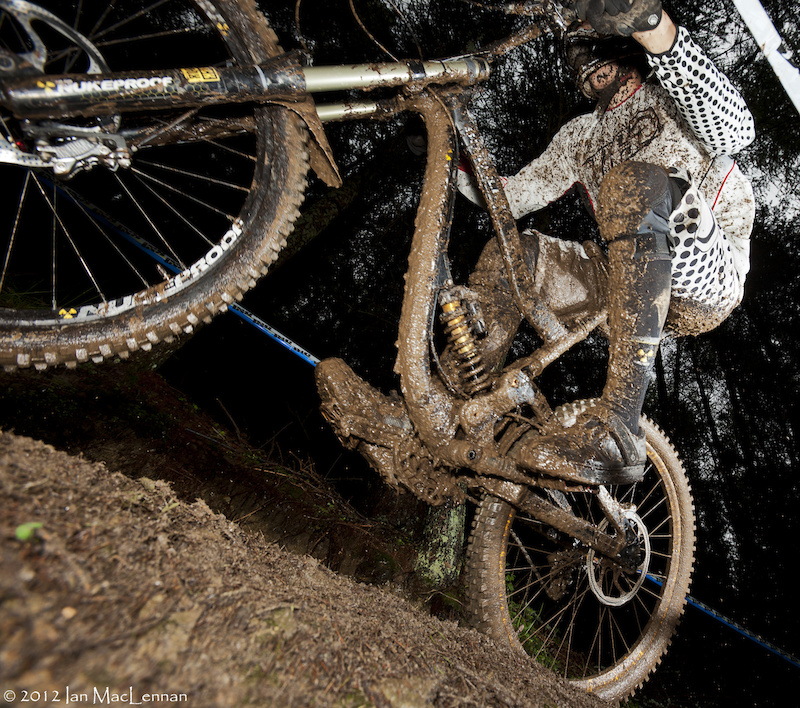 Top three after seeding in the women’s were Erin Maguire in third, Swede Josephine Björkman in second and Jess Stone taking the lead with a 4:06 run. In the men’s it was Mark Scott to take third having just pipped local Lewis Buchanan by mere tenths. Markus Pekoll took second while his team mate Brook spent time sampling the local dirt, all of which left Ruaridh Cunningham to capitalise and take the top spot. Biggest mention though has to go to Gary Forrest, builder of the field jumps, not for his JCB work, but for his top five seeding time. In open. On an Orange Five enduro bike. Always one to do well when having fun he must have been smiling after that. 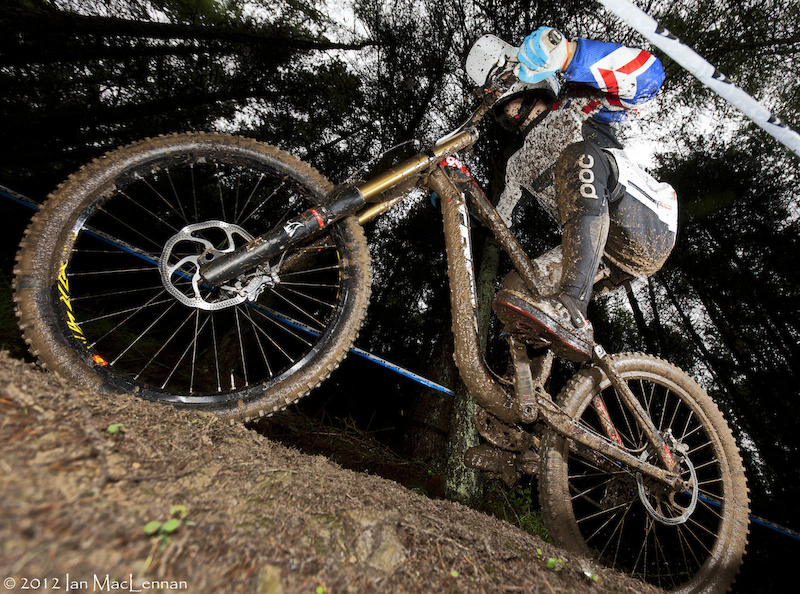 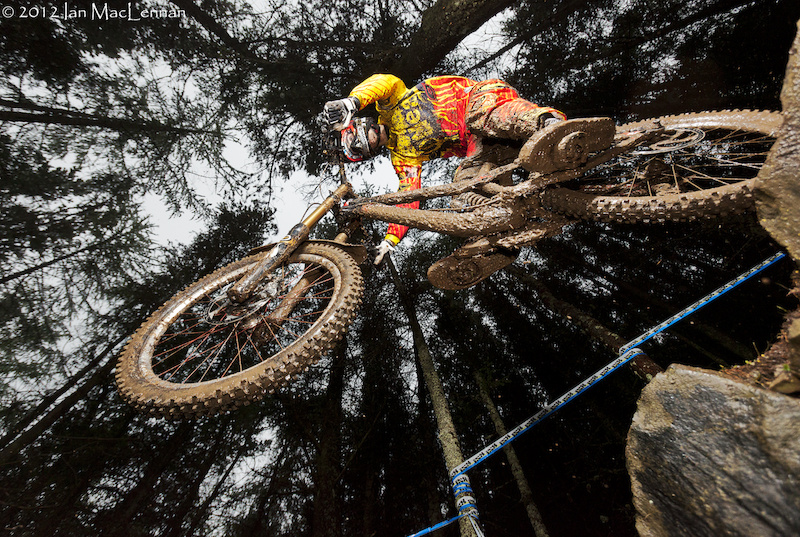 And on Sunday there was sun. It was perhaps a little thin, and it only appeared in between showers, but it was a definite respite after the torrents that hit the rest of the weekend. All of which meant that the mud got thicker, slower and decidedly harder work as final runs approached. With just a few practice runs opted for by most riders, it was on to the racing. In the Elite girls final Rosie Smith stepped up after a poor qualifier and took third, despite a fractured thumb sustained in the World Cup a week earlier. First and second were an exact copy of seeding but both managed to go faster, Jess producing a clear fifteen second margin with her sub four minute run. In the Elite men Lewis Buchanan stepped it up to take third with a 3:06 run, the ChainReactionCycles rider just half a second down on Brook Macdonald in second having put in a far cleaner run than seeding. Having placed first in seeding the pressure was on for Ruaridh but he kept it rubber side up and so very nearly slipped under 3:02 to take a well earned win before flying to MSA for the next round of the World Cup. 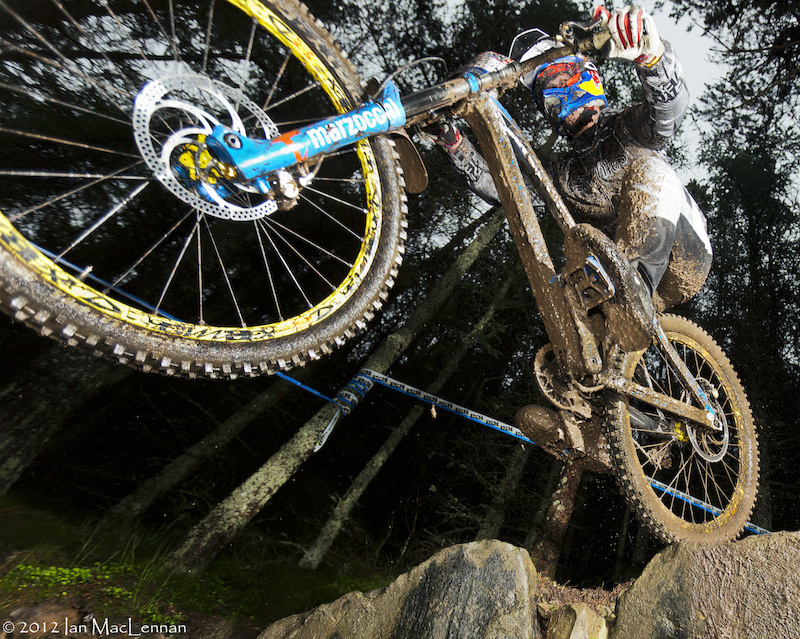 Thanks to all of the guys who made the event happen at Innerleithenmtbracing and beyond; for building the track, keeping things going in the rain and generally putting on an awesome event, it really was a community effort. The uplift was bike friendly (fairly rare in the UK) and efficient too courtesy of the guys at Northerndownhill. The lack of ride along the road was hugely appreciated!

Hilux, as in the Asian / Australian Market - and diesel!

redrook (Jun 19, 2012 at 12:08)
Haha you must be kidding aaronclixby, they have MUCH bigger trucks. The Hilux/Navara/Range Rover etc are considered small trucks over there. Even the Ford F150 isn't that big over there, and they are so big we don't get them here.

DARKSTAR63 (Jun 19, 2012 at 12:35)
Ive seen that Top Gear episode. So sweet. Yeah that truck was just called the "Pick Up" here. It did not have the Hilux designation but was sold here also untill they changed the name to Tacoma for the 1996 model year. The Tacoma remained a small truck untill 2005 when it grew a bit to the size of the one pictured at the top of this article. Those old pick-up's were the best....they don't make them quite like that anymore

At least not here.

DARKSTAR63 (Jun 19, 2012 at 12:46)
It looks like for "Hilux" Toyota was actually using the old North american 89-95 Pick Up chassis. So we DID have them here, but not anymore. Just wanted to make that correction. I was sure they had moved on to using the newer coil over front suspension found in our Tacoma, as opposed to the torsion bar setup.

taletotell (Jun 19, 2012 at 12:56)
My dad has an 09 tacoma 4 cyclinder. I would love to have a hilux but that 4 cylinder gasoline in the tacoma doesn't do the job for pulling the sailboat to the lake. I had an 85 that was a lot of fun but I can haul just as much crap in the back of my subaru. Give me diesel, and give me enough power to get the job done. Otherwise i'll stick with my wagon.

...and you were saying the Hilux was small.

otherwise you'd be dead going over the drops.......

NAPALMJEFF (Jun 19, 2012 at 13:09)
great day first time i have been to dh event have done some innerleithen trails my bike not built for them need to upgrade hope your reading this alpine bikes at innerleithen al be looking for a good deal on a remdy 8 or slash ? after the summer.i am mostly at glentress just love that black trail anyway great day and all the riders were fantastic especially the rider that was in the tshirt no gloves or pads all of them class.

daveyboywonder (Jun 20, 2012 at 2:45)
It shouldnt be, but that video makes me want another downhill bike sooooo much.

everchop (Jun 20, 2012 at 1:50)
What i thought too. Thats commitment! I've done a couple of freeride shoots with this phographer, Ian. He's only 19/20 years old and got serious skillz with the lens.

Enochdhu (Jun 20, 2012 at 9:14)
You're in deep, deep trouble monsieur cloverleaf! Remember I know where you live. I was quite enjoying the thought of someone thinking I was twenty years old. Why spoil their illusion? I can't even remember being twenty years old but I guess I must have been once.

samminett (Jun 20, 2012 at 0:33)
maaate your all s*it, Top Gear said they are INDISTRUCTABLE!!! they dont my mate has had one for many more KMS than that and she's running like a hylux should INDISTRUCATBLE
Below threshold threads are hidden

samminett (Jun 20, 2012 at 0:33)
maaate your all s*it, Top Gear said they are INDISTRUCTABLE!!! they dont my mate has had one for many more KMS than that and she's running like a hylux should INDISTRUCATBLE