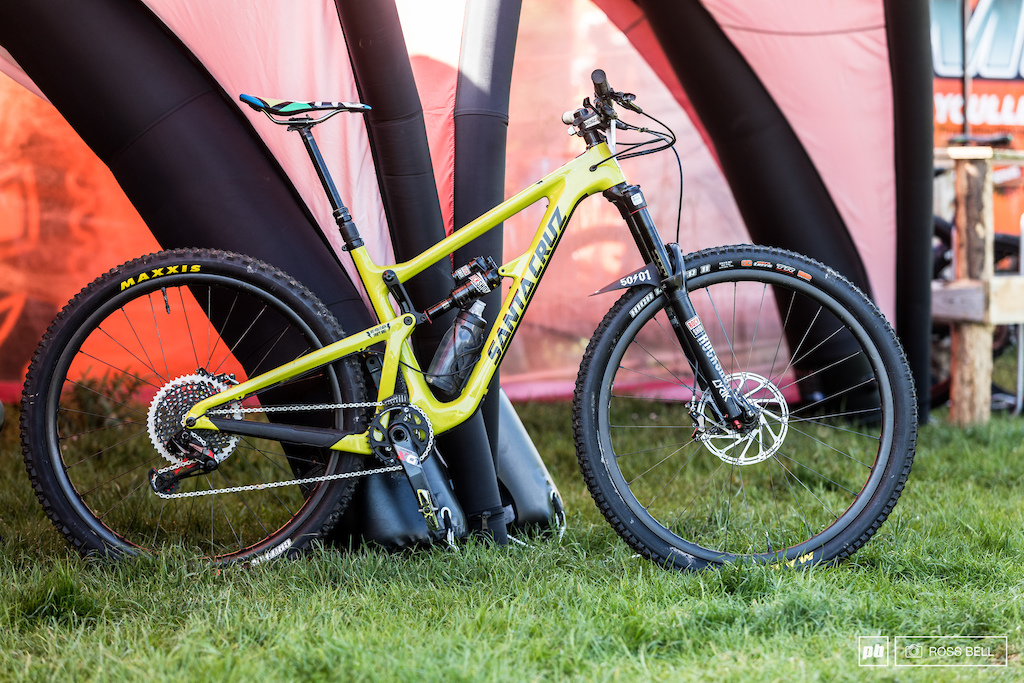 Iago Garay and the rest of the Santa Cruz enduro squad are on fresh Hightowers this weekend, but it looks like there might be a little more going on than just a snazzy new paint job. The differences might not be immediately obvious, but a closer look reveals that the rocker link doesn't have the two geometry positions found on the standard Hightower, and the rear brake now uses a post mount rather than the international standard mounting found on the original.

There have been rumors about a longer travel Hightower floating around ever since Greg Minnaar was spotted doing some pre-season testing aboard a Hightower with a Fox 40 up front, and plenty of unsponsored riders have figured out how to eke a little more travel out of their stock Hightowers by using a different length rear shock (for the record, something Santa Cruz doesn't recommend), but these new bikes are a good sign that there's something new in the works for the not-so-distant future. 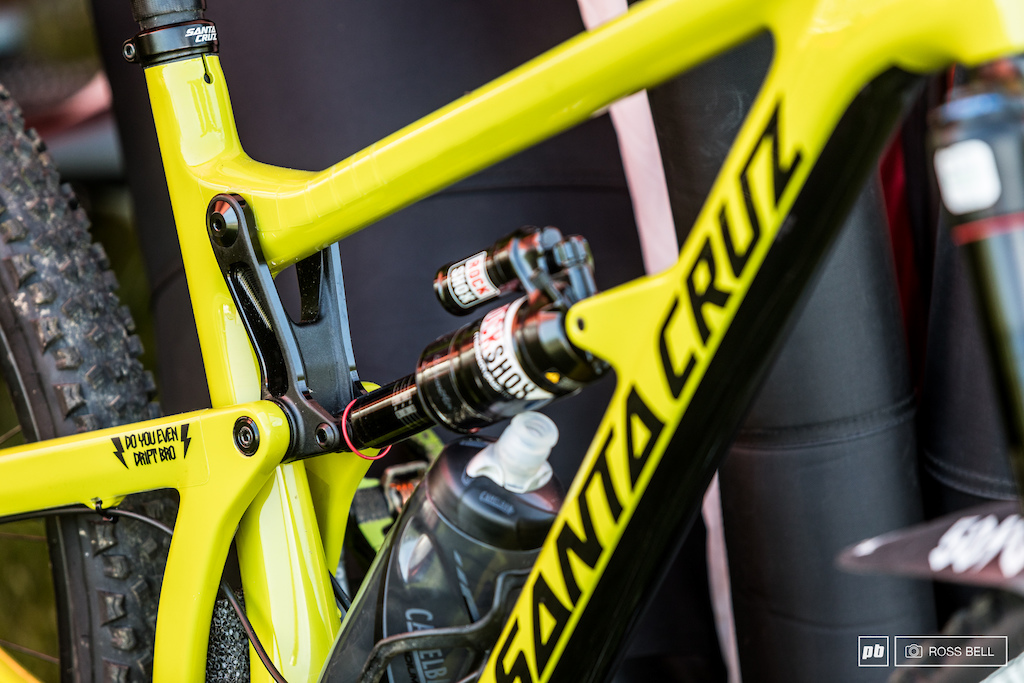 Even if the sun is shining, it doesn't hurt to be prepared for muddy conditions in Ireland, which is why Iago has a piece of moto foam tucked into his bike's rear swingarm. 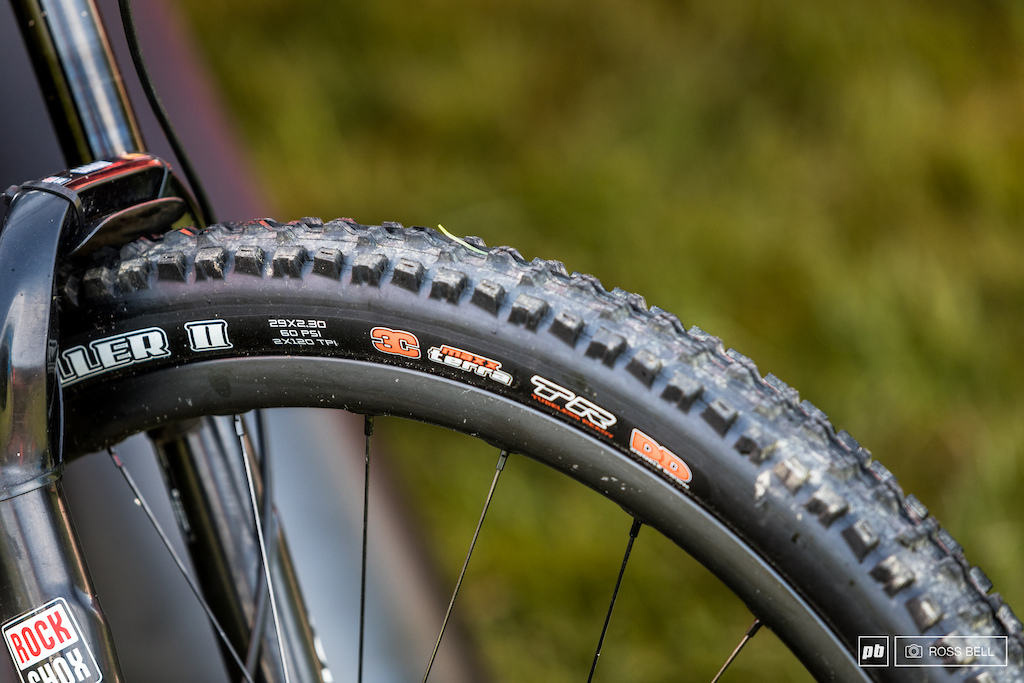 Iago is running a Maxxis Highroller II up front and the faster rolling Griffin in the rear, mounted up to what look to be wide, asymmetric, unmarked carbon rims. 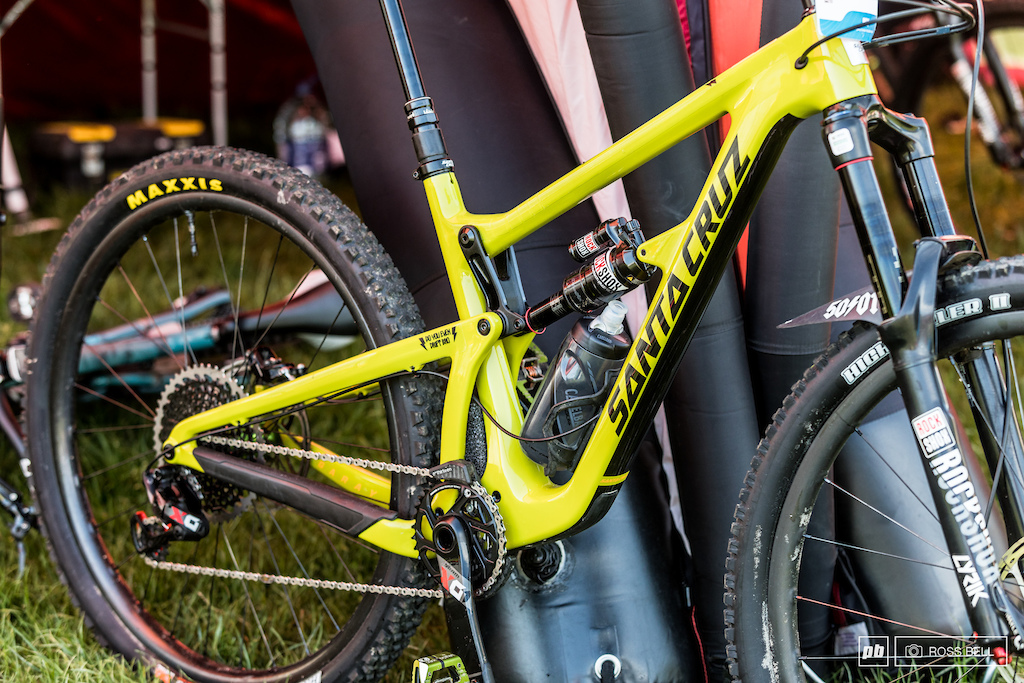 siderealwall2 (May 26, 2017 at 11:29)
That humongous lyrik and less curved upper link would match up. Appears to be a touch longer stoke shock on there too. Nomad color wasn't updated, uses 142, and the link looks to be a close match with the silver one.

stefanfresh (May 27, 2017 at 9:46)
It says santa cruz doesn´t recommend upping the travel in current hightower, yet the team did, it... seems contradictory. It´s almost as if im reading, it works...but don´t it as then you might have second thoughs on buying the new one....?

JustBuyIt (May 27, 2017 at 10:24)
@stefanfresh: They don't recommend long shocking the current model with the current linkage because in some conditions the tire can buzz the seatpost. What you are seeing here is a revised linkage and swingarm. No worries.

I agree with the short CS. I don't want to loop out on the climbs I do.

wibblywobbly (May 26, 2017 at 11:32)
The bike is out in public already, just break the embargo and tell us what it is instead of being a part of Santa Cruz' drawn out marketing campaign to build interest among the accountants, lawyers and dentists that will buy these. Or will this have to be secret because everyone had a great time in France at the Nomad launch and nobody wants to lose out on the next all expenses paid trip.

markg1150 (May 26, 2017 at 12:14)
hey my mate is a accountant and a double world champion. beware the accountant! there a clever calculating bunch. (apart from gap jumps hence the para part lol)
big up john gildea para cycling leg-end

mikekazimer Mod Plus (May 26, 2017 at 13:54)
@wibblywobbly, what information do you want? This looks like a longer travel Hightower, and that's what the article says. I don't have any details on pricing or geo - otherwise those would have been included

forkguardian (May 26, 2017 at 14:11)
most accountants don't have lawyer or dentist money. i know enough of each to say that with certainty. i'm an accountant at a ski resort so i definitely don't.

Asmodai (May 26, 2017 at 14:32)
>Or will this have to be secret because everyone had a great time in France at the Nomad launch and nobody wants to lose out on the next all expenses paid trip.

yes because breaking NDA is such a good idea

badbietz (May 26, 2017 at 15:09)
@mikekazimer: Come on Mike, can't you whip out a tape measure, protractor and scale and give use the full geo, andgles, weight, shock length and stroke. What are we paying you for? Oh wait we are not other than a few cents worth of ad click troughs. haha, keep up the good work.

poozank (May 26, 2017 at 15:27)
Agreed, its getting seriously annoying to the point that I won't wait for the new nomad I'll just buy from someone else

lccomz (May 27, 2017 at 7:25)
@wibblywobbly
Sorry, the details aren't for people like you. They are for lawyers, dentists, and industry insiders. You likely wouldn't understand them anyway. Best to stick with YT and Evil.

Loamhuck (May 27, 2017 at 19:19)
The bike community invented this bike - everyone was increasing the travel on stock HT and now they are like...oh look what we did (actually just mod'd the seat stay haha). Design engineer missed on a home run in 2015 buy shorting on the travel.

karatechris (May 26, 2017 at 13:37)
It's high time they put a discreet rear fender on their bike. I have a Bronson and really like it but it's a faff to scrap the mud out of the bottom linkage after each ride.

gonecoastal (May 26, 2017 at 17:17)
The next version is slated to have even less bottle room beneath the shock

bikingbayarea (May 26, 2017 at 11:20)
Maybe some tape (named after a certain monkey I can't remember which) that could be used in an emergency situation by the rider.

heathwb (May 26, 2017 at 13:46)
That's the new Debonair can for the reverb. Gives a smoother stroke off full extension, and more midstroke support.

aljoburr (May 26, 2017 at 14:59)
Yes looks like slightly longer top link, but could be many other little angle tweeks, but not really much to improve such a cool bike, pity I do not think will ever own one, but think it would be nice to at least ride one some time, maybe I should looking into borrowing one, but do not think my bank balance to change the actually owning one. But can dream!

aljoburr (May 26, 2017 at 15:20)
Funny that bike design still struggles to fit a bottle cage without scrapping your shock or changing your shock setting when having drink?

G-A-R-Y (May 26, 2017 at 17:11)
Nah... it's not the frame designer. Iago is sponsored by CAMELBAK. Their bottle designers are the problem. Pretty sure any normal £2 500ml bottle would have fitted without contacting the shock body.

Begs the question tho... WHY not wear a nice CAMELBAK hydration pack and benefit from a lightweight carbon bicycle.. You could probably even store a bunch of handy tools n spares in it too.

silvbullit (May 26, 2017 at 18:42)
@G-A-R-Y: toooootally agree...BIKE: bobbing and weaving and whippin and generally floating around as light as can be.....RIDER: trying to be as smooth and fluid and efficient as possible (not moving nearly as much)......which makes the most sense to attach a bunch of weight to?

Hint: refer to laws of physics.

it means I'm taking the piss

That. Plus I don't actually care

DillonThomson24 (May 26, 2017 at 12:20)
Mud will clog on the Hightower jamming the bottom link and rear wheel. Moto foam stops the mud from filling the lower link.

stiingya (Jun 5, 2017 at 20:57)
They sure the frick should start shipping all their bikes with that piece of foam in the muck magnet area....

adrennan (May 26, 2017 at 14:14)
@acali: i would compare it to the aggressor most closely? It is super fast rolling and there is no dead spot in traction as you lean it over. think super knobby dirt jump tire (i run them front and back on my slopestyle bike for the occasional trail that bike sees).

andrewbikeguide (May 29, 2017 at 12:10)
@adrennan: Do they flat as easily as the Aggressor? Don't think I know anyone who has managed more than 3-5 rides out of an Aggressor without a serious puncture or sidewall tear.

adrennan (May 30, 2017 at 8:21)
@amrskipro: i haven't had that issue. i am running the double down casing. i did dent my rim which was causing my tubeless setup to loose air. got that fixed and put in a huck norris. i was previously running the dh casing of the griffin and that was a pretty bomber tire.

i stopped running exo casings in the rear, they cant handle my local colorado trails mixed with my crappy riding.

erik2k10 (May 26, 2017 at 12:54)
I'm calling it now, when the new Santa Cruz bikes drop next week there will be nothing innovative. Just a bunch of geo updates that other bike companies figured out already. Surprised SC hasn't developed their own wheels yet. Amazing how little innovation SC has created after being bought by Pon. You'd think they would have come up with at least 1 innovative feature by now...

mudmandhbrazil (May 26, 2017 at 14:10)
what about V10 29er? If most of the bikes are perfect why they need to change something? Why they need to develop wheels if they work close to Enve?