Through the Lens - Ian Hylands

Join Pinkbike  Login
There are a few photographers that have a large presence in the biking industry, and Ian Hylands is one of those people that stand out. Even at a young age Ian was getting the cover shots for some of the biggest magazines at the time, and it's no different now. Ian is still pumping out A Grade shots through his Nikon camera gear, and he's still pushing the limits of photography. I recently got some time to do an interview with Ian, so here you go!

Read on for the Ian Hylands' Interview...Who are you, what do you do, and why are you being interviewed for Pinkbike?
My name is Ian Hylands and I am a photographer. I am being interviewed by Pinkbike because they think I’m cool and they want to learn what makes me special, so they can bottle it and sell it. Just kidding, this interview is to get all the other photographers out there stoked about what they’re doing...

Where were you born? Did you get into photography when you lived there?
I was born a long time ago in San Mateo, California. I left there when I was 2 and I don’t remember being into photography at that age, but I don’t really remember that age at all. 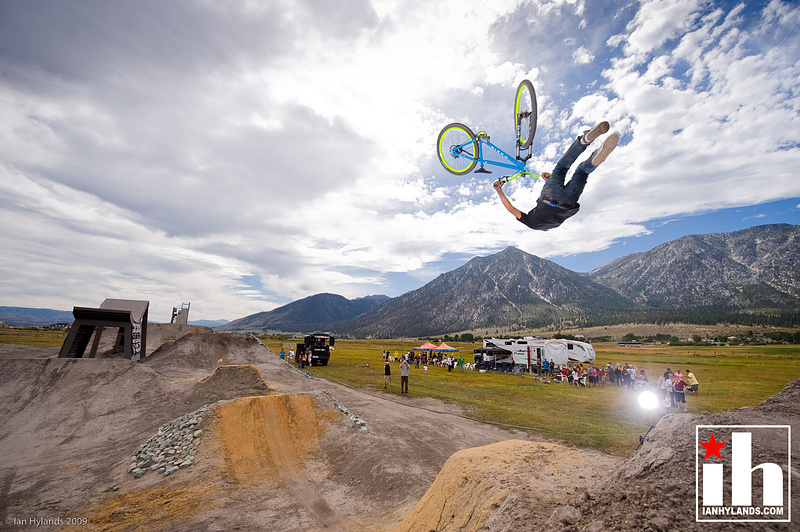 Picture by Ian Hylands
What got you interested in photography?
I liked taking photos as a child, somewhere in my parents house there is an album or two that have some photos that I took when I was young. I don’t think that really counts as “interest in photography” however, that part came later. In early high school I traveled a lot for sports and I always had a camera with me, and as I started getting into skateboarding I started shooting more and more with my dad’s camera, an old Nikkormat.

Have you ever attended schooling for photography?
I've taken a few photography courses over the years, and attended workshops, just stuff that has interested me, advanced lighting, b&w processing different stuff.

What was the first camera you shot with? Do you have 1 photo that stands out from that camera?
For the purposes of this interview I’m going to say that the first camera I really shot with was my dad’s old Nikkormat, I think it was an FT2. I took a lot of skate photos with that camera, the ones that stand out the most are a shot of Chris Miller doing I think a Melon, and a sick Indie from Christian Hosoi, both at the Expo 86 comp at Seylynn Park in North Vancouver. After that I had a Nikon F90 in the early ‘90s and I took a lot of sick photos with that camera.

What was the first photo you got published?
The first photo that I had published was probably a skate image in concrete powder or another local skate mag in the late 80’s. The first image that I had published in a bigger way was a shot of John Griber jumping over a crevasse on Seratus Mountain. It was used for the “Shred Americard” back in 92-93. I also had a bunch of other snowboard stuff published around that time including a bunch of stuff in Transworld Snowboarding and a Mistral Snowboards ad or two. 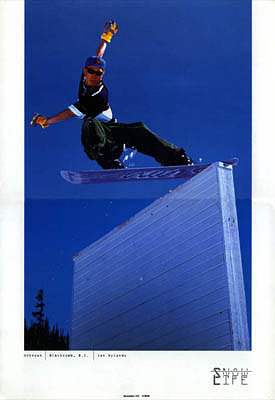 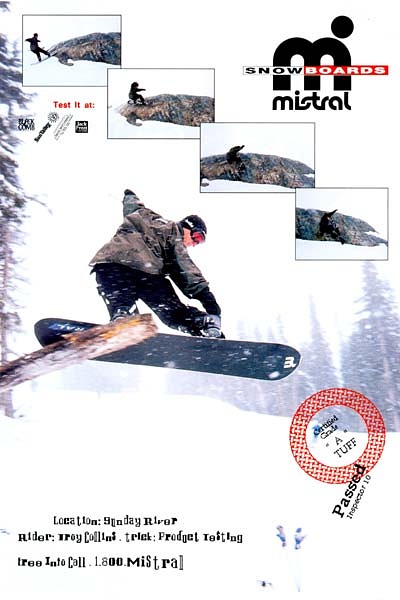 Where do you get inspiration for your photos? Any other photographers come to mind?
I don’t really get a lot of inspiration from most of the mountain bike photographers out there. I prefer to look at stuff from fashion photographers, and guys like Daniel Geiger that do both fashion and bike.

What do you do outside of photography?
I also teach an action photography class at the Vancouver Institute of Media Arts, and recently started teaching a shorter class on action at Western Academy in Victoria once a year.

Give us a break down of your current gear. What do you have, and why do you have it. Does everything in your pack have a reason for being there, or is some of it “just in case”?
I have a lot of gear, way more than I can list here. Here is a quick review of my current stuff. Nikon D2X, Nikon D700, Nikon D3s, Nikon lenses both FX and DX.

I use Nikon flashes, mostly SB800’s but I have one SB900 as well and a bunch of other flash gear including stuff from Quantum, Alien Bees and Elinchrom as well as a few random shoe mount flashes. I use Honl modifiers on my shoe flashes and I use Pocket Wizard Multimax’s to trigger everything. I have a large assortment of cables for hooking them up to cameras and flashes. I do a fair bit of remote camera work so I have a large assortment of custom mounts and brackets.

When I pack my bag or bags for a shoot I usually think about what I’m going to need and where I’m going to be. For basic stuff or riding I pack as light as possible, but for commercial jobs or shots that are one time only I pack everything I might need as well as backups for almost everything.

I use SanDisk 16GB Extreme Pro cards, and I normally use Powerex batteries in my flashes. I also usually take my light meter with me for flash setups. 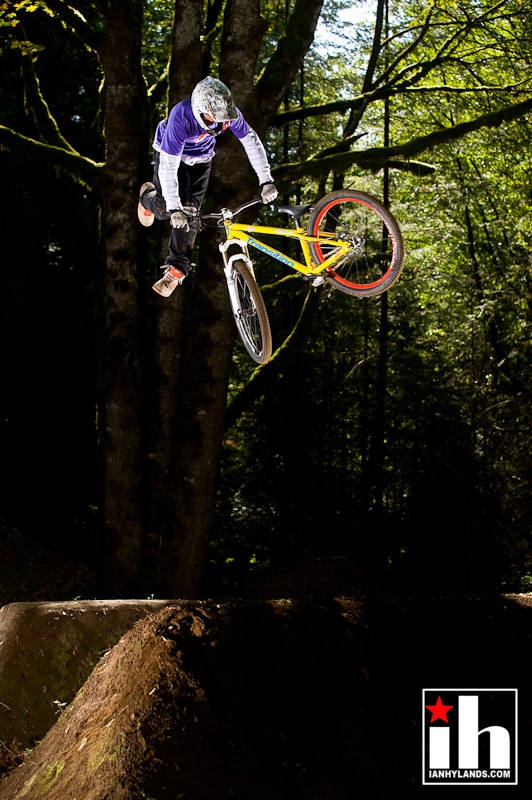 Picture by Ian Hylands
Do you ride bikes? As often as you would like?
I like to ride bikes, but as it’s hard to work and ride at the same time I don’t get to ride nearly as much as I’d like. I usually end up going to events and not even having a bike, too much stuff to think about and too much stuff on the plane.

What was the most memorable, or best experience you had working this year?
I think the most memorable experience I’ve had in the past few years has been my trip to Jamaica, if you get a chance to go there let me know and I’ll do my best to hook you up with the right people.

If you could give every up and coming photographer one pointer, what would it be?
Anyone that’s getting into photography right now needs to go to school and learn two things, how to do business well, and how to shoot video. It’s the way of the future and it’s fast becoming the way we view content, even if it’s only editing video slide-shows...

Do you have one photo that stands out as your favorite photo you have ever shot? Why?
I don’t really have a favorite photo, but I could probably list a bunch of them over the years. Chris Donahue’s nothing at the Grouse World Cup in 2001 stood out for me. That was back in the film days and after I shot it I knew I had it and couldn’t wait to get my film back from the lab. The same with the Bike Mag cover shot of Berrecloth the next year, although that didn’t stand out in my mind nearly as much. More recently my favorites have been a shot of Niki Gudex riding XC from Idaho in 2007, and Cam McCaul’s canyon gap flip sequence from the same year. I also really liked the scrub I shot with Kirt Voreis that year, I guess 2007 was the year that I was probably happiest with overall. This past year I have some Berrecloth shots that I like, as well as a shot I’m working on with Semenuk that still needs some work. I’ve shot a bunch of racing over the years, and there are more than a few sick race shots that I can think of, and same goes for other things like portraits and life-style stuff. I’m also super stoked on the stuff I shot for Fox Racing with Chase, Lenosky, Voreis and McCaul last year. 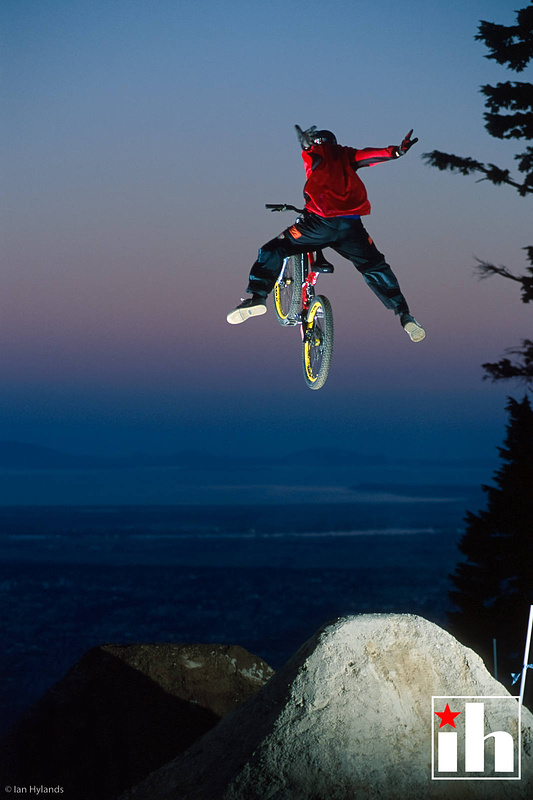 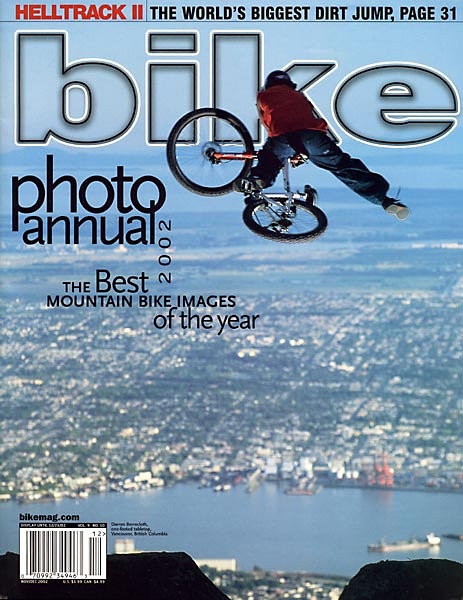 Darren Berrecloth - Flat table
First thing you do before you get out of bed?
Usually it involves opening my eyes and looking at my sleeping son, although sometimes he wakes me up...

5 things you wish you had in your photo bag?
Broncolor Scoro A4s Flash kit, a few more PW Multimax’s, a couple of big lenses for when I need them, and a few assistants to carry everything and help set it all up.

Shoot some awesome photos, or go for an awesome ride?
Either, depends on the mood.

We have seen some video tutorials from you, do you plan to do any riding videos in the future?
I don’t know, we’ll have to see where it takes me. I'm definitely working on expanding my video side. The planning and shooting part of it is a fairly easy transition for me, I can visualize what I want stuff to look like, it's the editing learning curve that's killing me right now.

As a photographer you obviously travel a ton. What’s the most memorable trip you have had to date?
Every trip is memorable. So far I’ve been through Europe, Peru, El Salvador, Costa Rica, Mexico, South Africa, Puerto Rico, all through the States, and Jamaica. If I had to choose one, I’d probably say my first trip to Jamaica.

What's the next big step for Ian Hylands?
Red Bull Crashed Ice is what’s on my mind immediately, but then I’ll be back and working on a bunch of projects including some upcoming shoots and a few workshops I’m hosting. 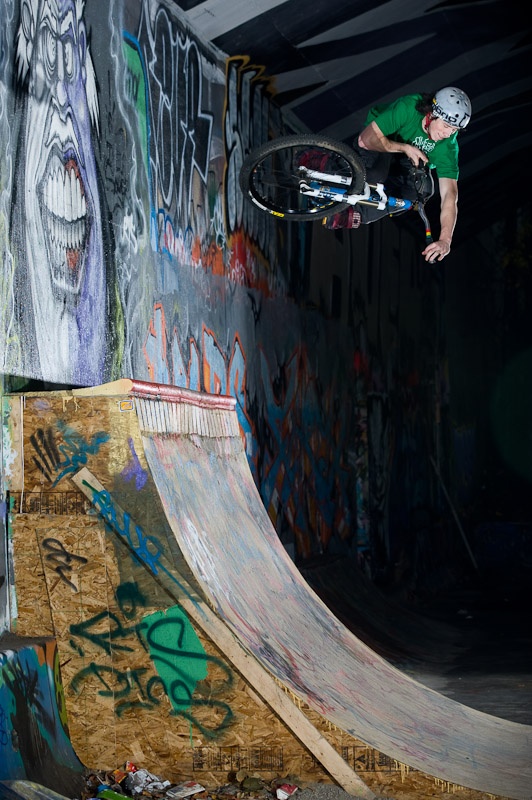 Picture by Ian Hylands
PC or Mac?
I used to be PC and I’m pretty comfortable with it, however I’m currently on a Mac.

Any last words or shout outs you want to give?
My wife for putting up with all my shit and Pinkbike for letting me do this interview.

Really I’d like to thank Nikon in Canada for helping me with gear and anything else I need, SanDisk for the great digital film, LowePro for the bags, and Red Bull for keeping me going. I’d also like to thank Oakley for the awesome eye wear and the puffy coat that I’ll be wearing next week in Quebec as well as Camelbak for keeping me hydrated all the time.

I’d like to thank anyone else in advance that wants to help me out as well, I’m sure I’ll be working with a bunch of great people this year!

katinasd (Mar 25, 2010 at 1:43)
Very nice interview indeed. When I started photographing a few years ago, Ian's photos (together with Sterling's and Harookz's photos) got me thinking about angles, light settings en so many more things. Now i'm working as photographer myself, so thanks for the inspiration.
Keep it up and good luck man! Remember you have the best job in the world.

ericpalmer (Mar 25, 2010 at 1:15)
Nice interview guys, good read & interesting to hear how you started up. Obviously some super sick shots in there too. Good luck for all your future projects Ian, sounds like you have some fun ahead!

brockanderson (Mar 25, 2010 at 1:40)
great interview! i definitely remember seeing that shot of Chris Donahue as a kid,
there was another shot of his nothing on the NSX: Lights Outs cover i think,
i need to find that and get the old VHS running again.

nfiorito (Mar 25, 2010 at 12:11)
Super inspirational, thanks! I also think that you could find yourself some volunteers to lug gear around pretty quickly for next to nothing on this site! Chase Jarvis' stuff with the A4s gear is pretty inspiring...but quickly becomes deflating when you look at the price of the packs!

My photog is still more of a hobby, but its starting to really take over. Its just wicked fun! This interview just makes me wana keep shooting.