Illuminated: The Quest for a Special Image in the Chamonix Valley 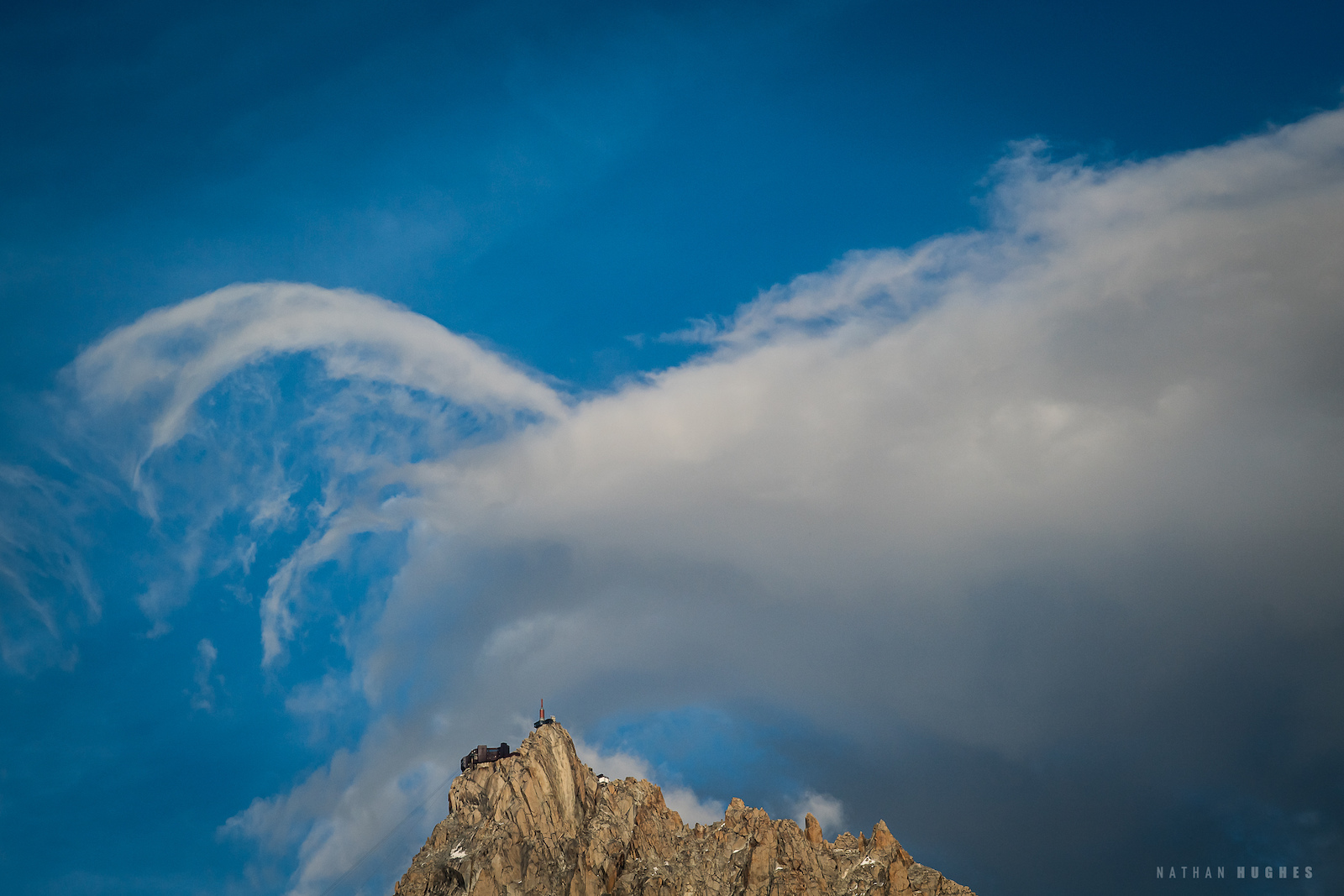 Now in its fifth iteration, many Pinkbike readers will be well aware of the 'Illume Image Quest'; a photography competition across the adventure-sports world that Red Bull hosts every 3 years. While all judged contests can produce a lot of discussion, if nothing else the Illume contest seems to have driven some of the most creative photographers and athletes to go one further and produce some incredible images just for the show. It's certainly always inspired me and I love the idea of 'making' an image. As the old photographer's motto goes 'the best images aren't taken, they are made'. You have the vision and you go out with a shovel and some rider talent and try to make it a reality in one click.

Epic has always been a key, if over-used, word surrounding this competition and nowhere more so than in the 'masterpiece' category, where huge landscapes and tiny riders tend to go furthest. Having never entered before, after failing to come up with something worthy before the 2016 deadline, I was committed to making some unique shots away from the World Cups and Rampage where I'm normally shoulder to shoulder with a huddle of other media types. Besides, as a mountain bike photographer, it is surely my solemn duty to at least make mountain biking look a little bit cool compared to the more universally accepted rad-ness of surf, ski, and skate. 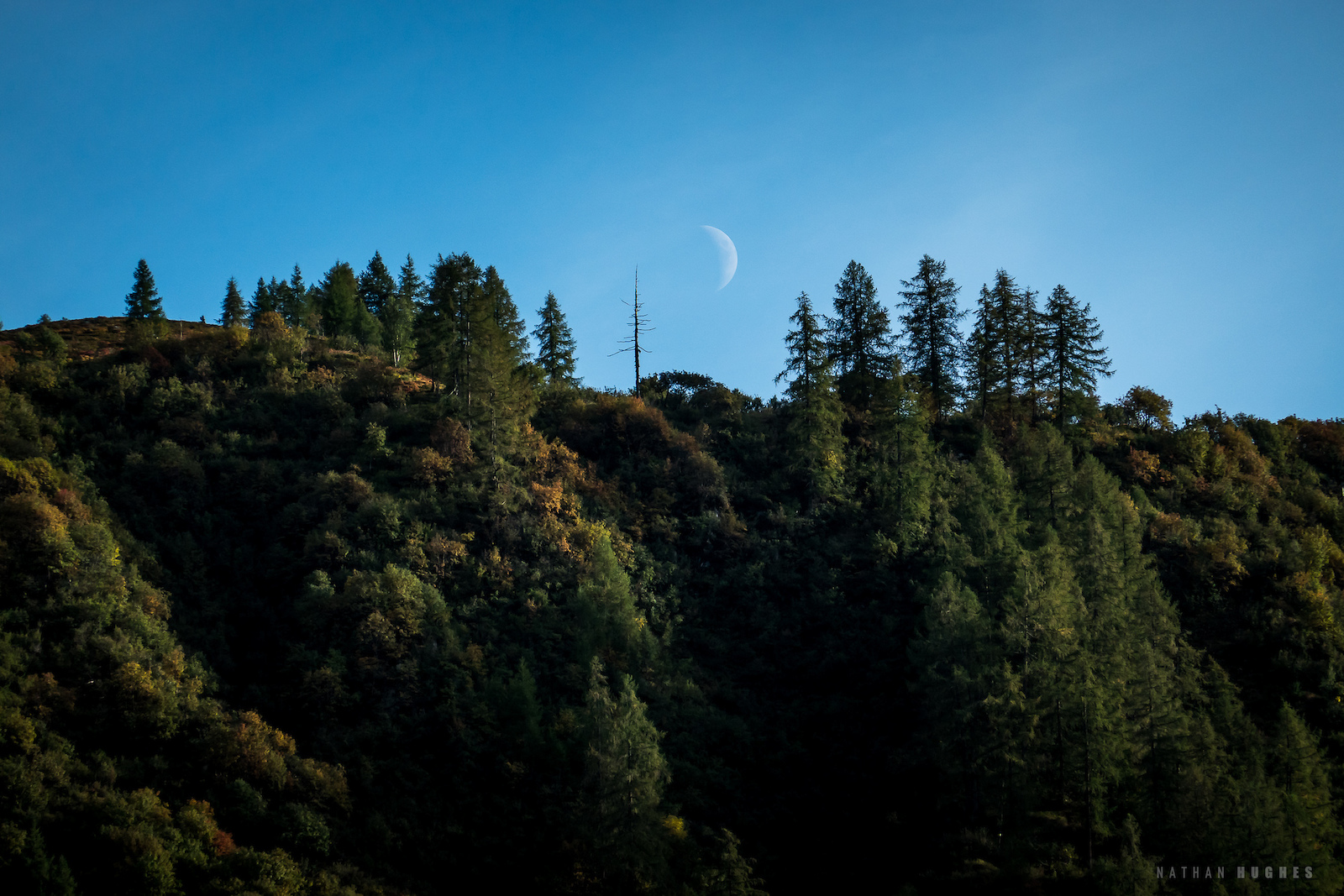 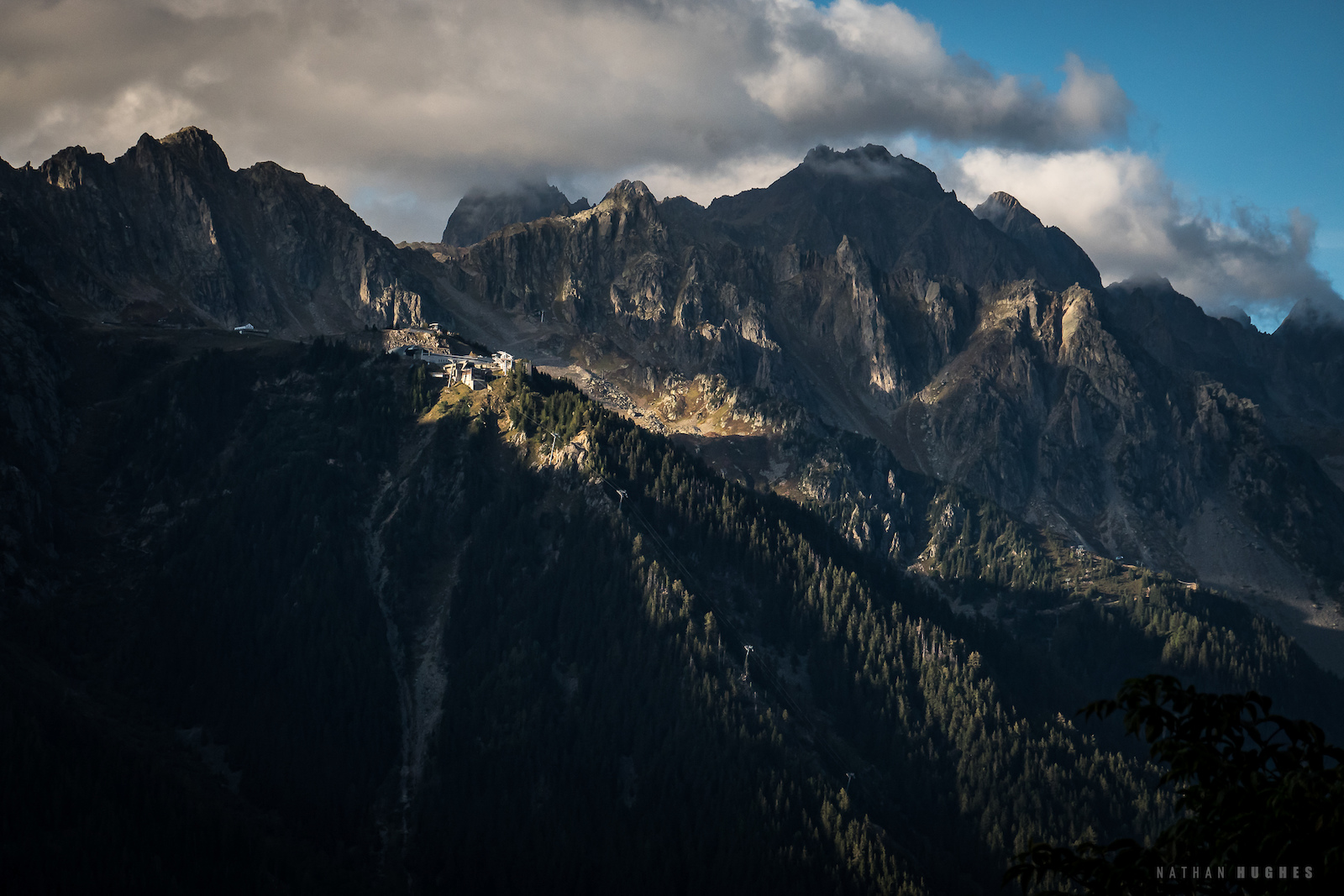 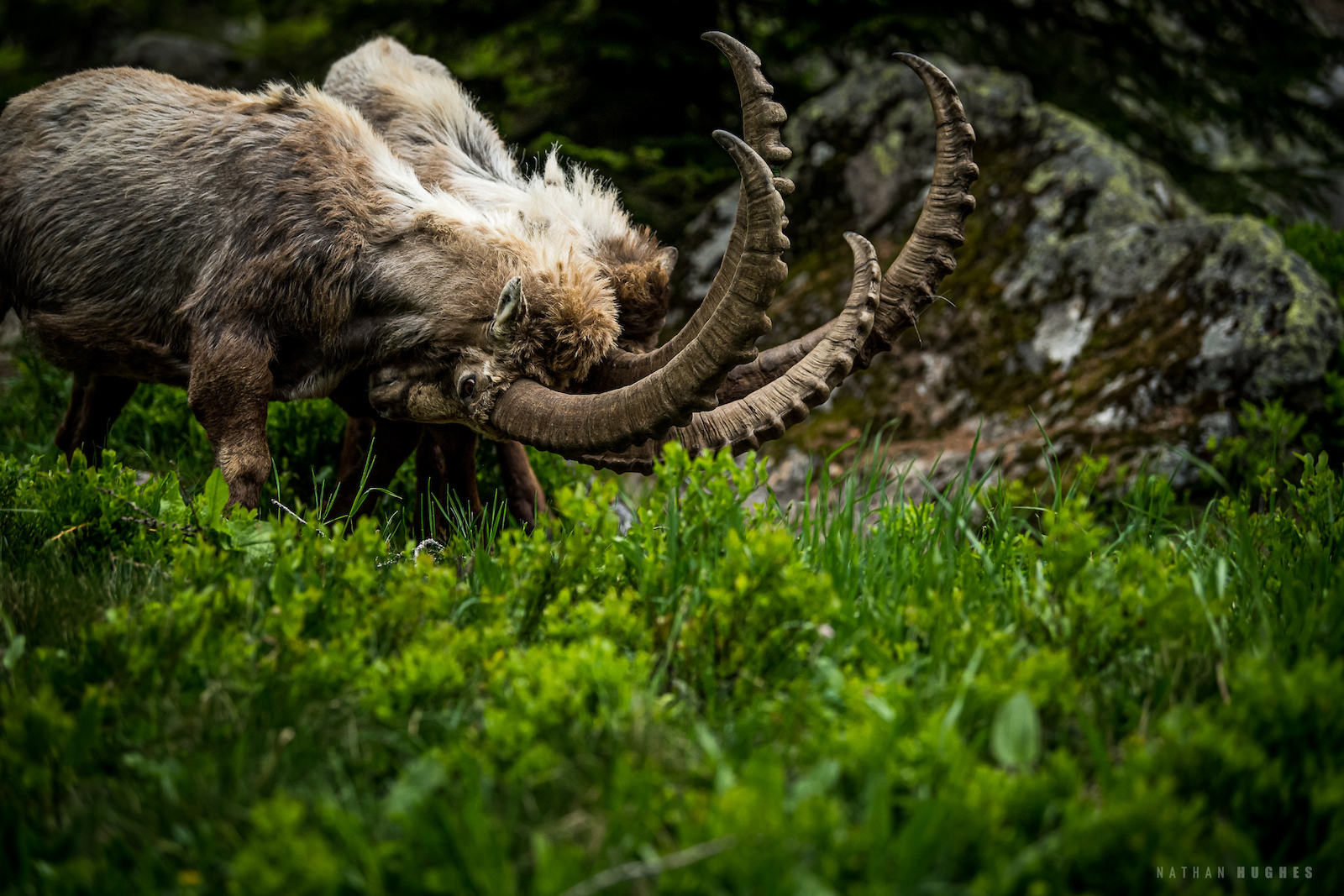 Last year, I moved to Chamonix in the heart of the French Alps. It's an incredible place where the landscape is nothing short of mind-blowing, even once you've had time to adjust to its magnitude. The town is nestled under the mighty Mont Blanc, and surrounded by steep forests and tremendous glaciers, all crowned by jagged peaks. It is a small but very international town full of skiers, mountaineers, climbers, and tourists. Mountain biking usually takes a back seat in the valley, especially as some trails are closed to bikes over the summer months to give the long trains of hikers and trail-runners their space. Still, while that can make life behind bars a bit awkward at times, the wild and rugged terrain seems like fair compensation to a photographer like myself. Even if it means having to haul a bike around on your shoulders at 2000m plus... more on that later. 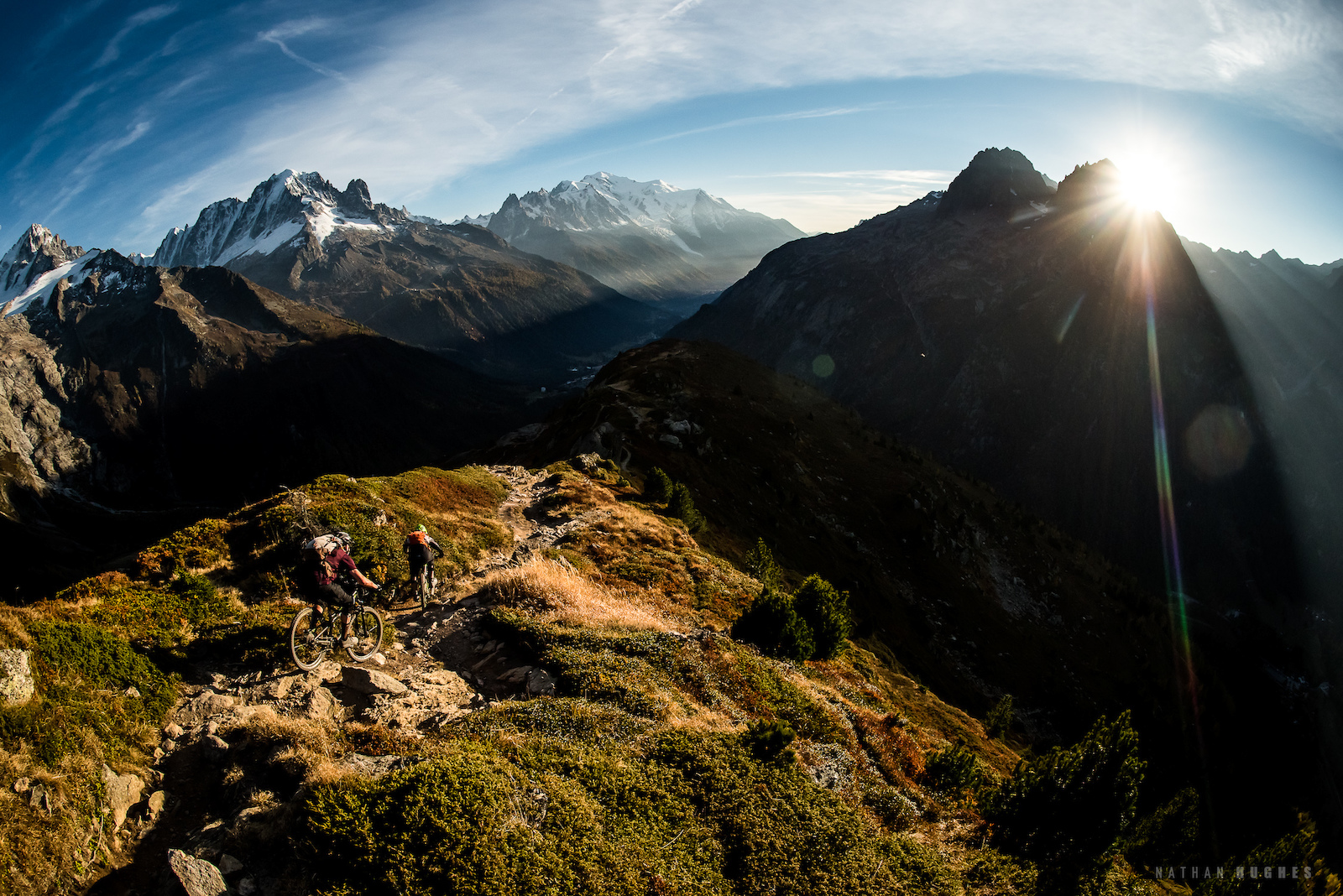 The way I see it, shooting a picture for Red Bull Illume involves maximising three main parameters. Similar to the fire triangle of heat, fuel and oxygen, for Illume you're going to need strong showings from location, light, and action. Each element needs to be as spectacular as possible for your photo to cut it with the best of them. And that standard... well, it's high. 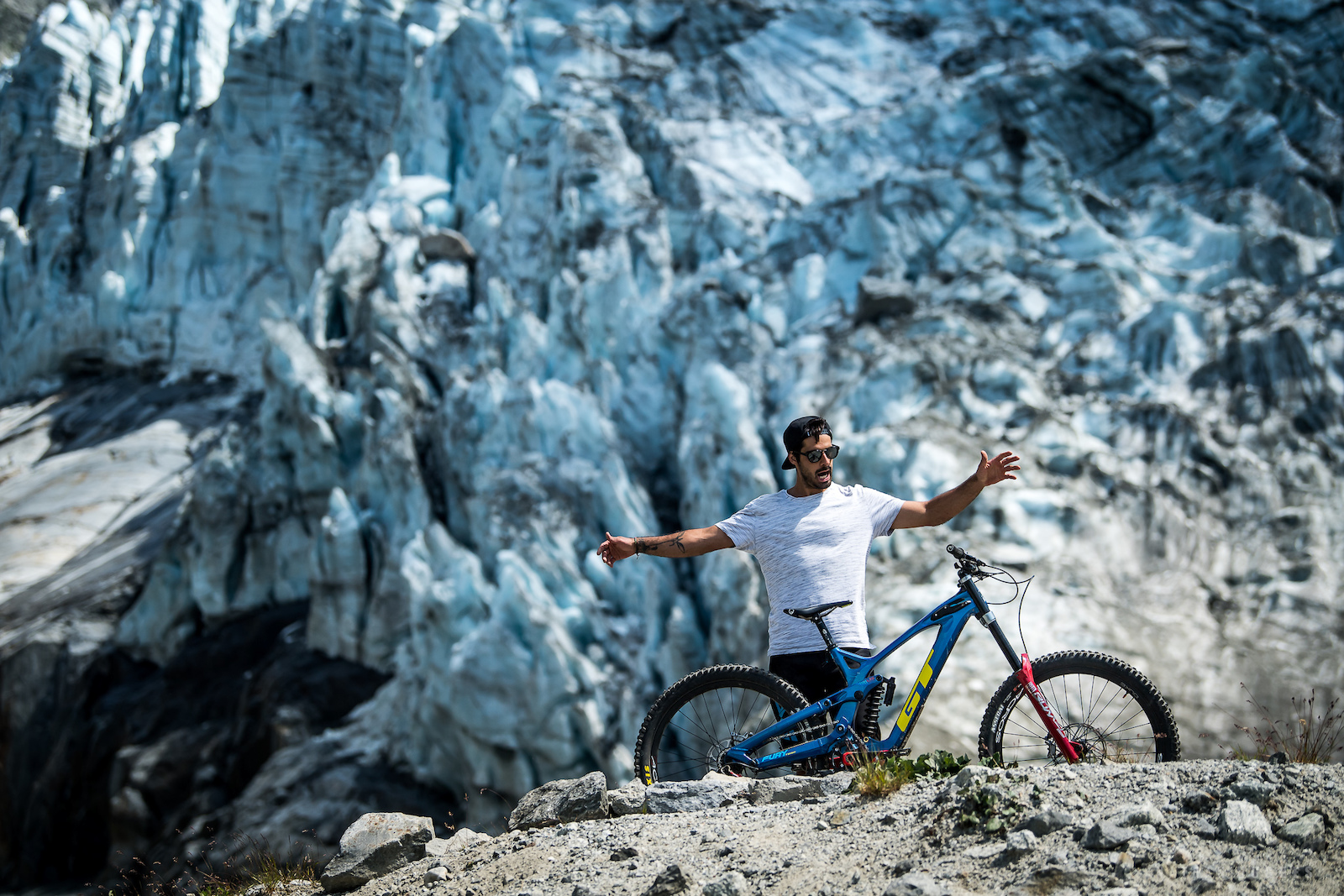 After a bunch of scouting missions to nail down the specifics of location and light, it seemed a superman or a backflip was 'all' I was missing... a combo of the two if possible! I figured the epic Chamonix back-drop and a bit of a sunset would do the rest when I first sent my friend Amir Kabbani an email.

We had worked together once or twice over the years and I knew he had the bag of tricks and a drive for getting the shot that not many other riders do. I mentioned working on something specifically for the Illume and he was extra interested. Of course, all things in the mountain bike world take a great amount of time, but the contest deadline was only a month or so away. Luckily Amir is a big hater of faff and a militant maker of plans; not much sooner than I'd typed the words he'd made the long drive down from Germany with two bikes... just in case. 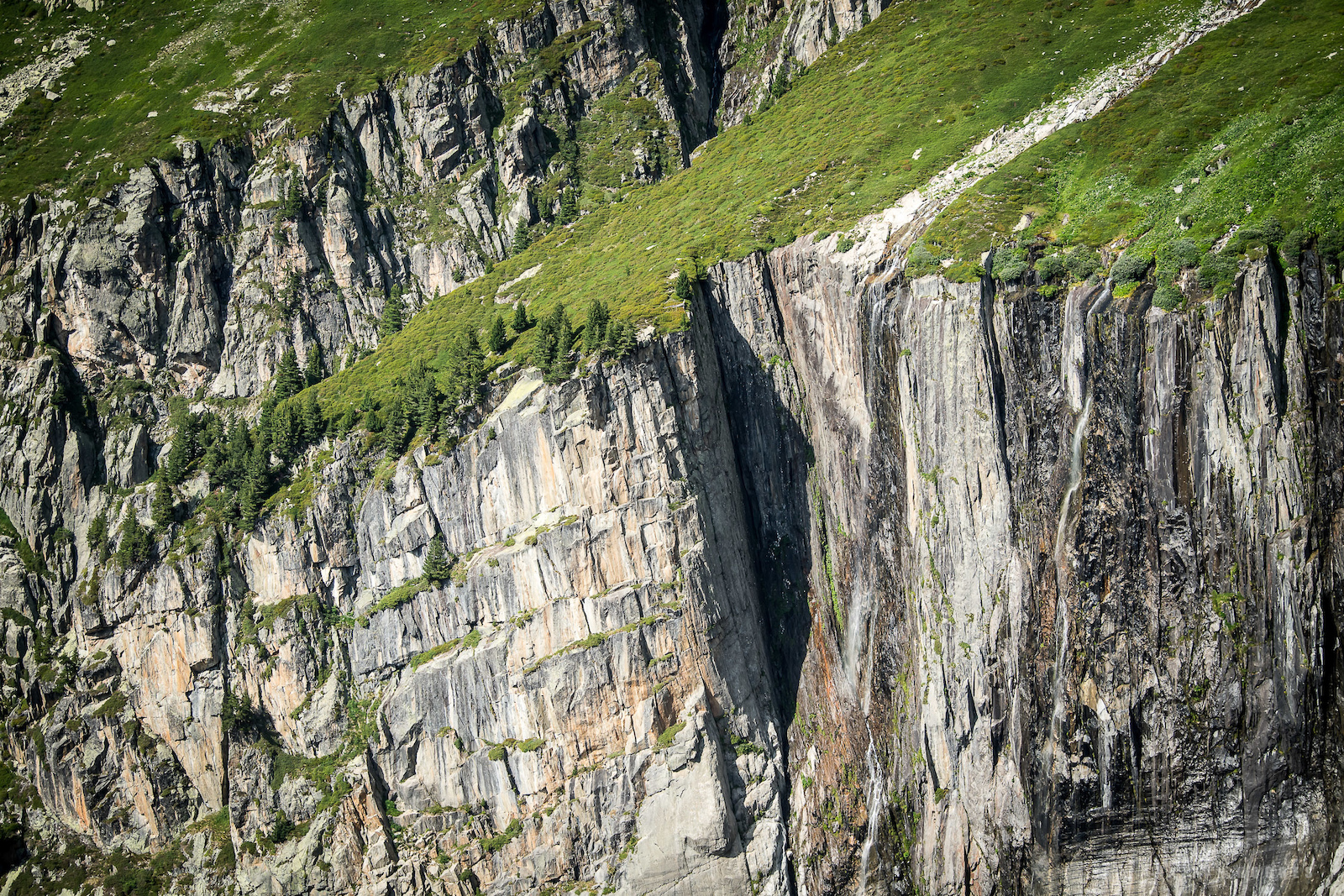 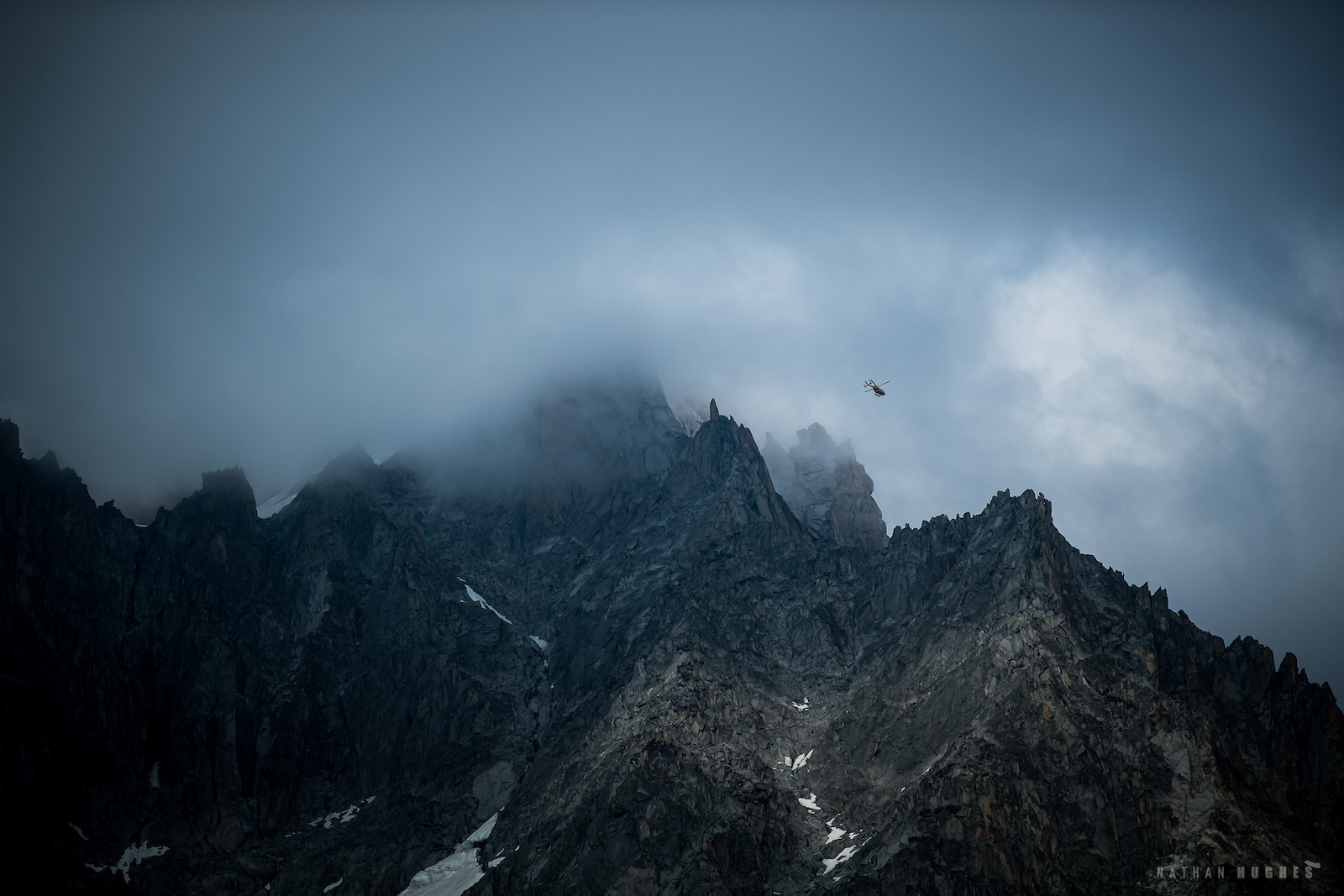 Certainly, expectations had been high, but our first attempt was pretty much a disaster. A thick band of low cloud made sure sunset was a non-event, while the freezing wind kept gusting across the glacier whenever Amir picked up the bike. The sketchy, crumbling take-off we'd awkwardly crafted was proving hopelessly dry and untrustworthy. Not ideal as it was about 5 meters away from a 200m cliff.

With the collapse of that terrible kicker we had slaved over, my visions of super-flips came crashing down too. Above the tree-line, there simply wasn't the dirt to facilitate that kind of maneuver. It seemed I'd overlooked this key factor. On all sides of the valley, tough shrubs or a thin layer of grass hid janky granite bedrock and large boulders. Even if we had official permission to build something, the likelihood of obtaining that being close to zero, it would take machines and imported dirt to make any kind of a dent on these mountain sides. I mean there is a reason no one else is doing this kind of thing around here without the snow. 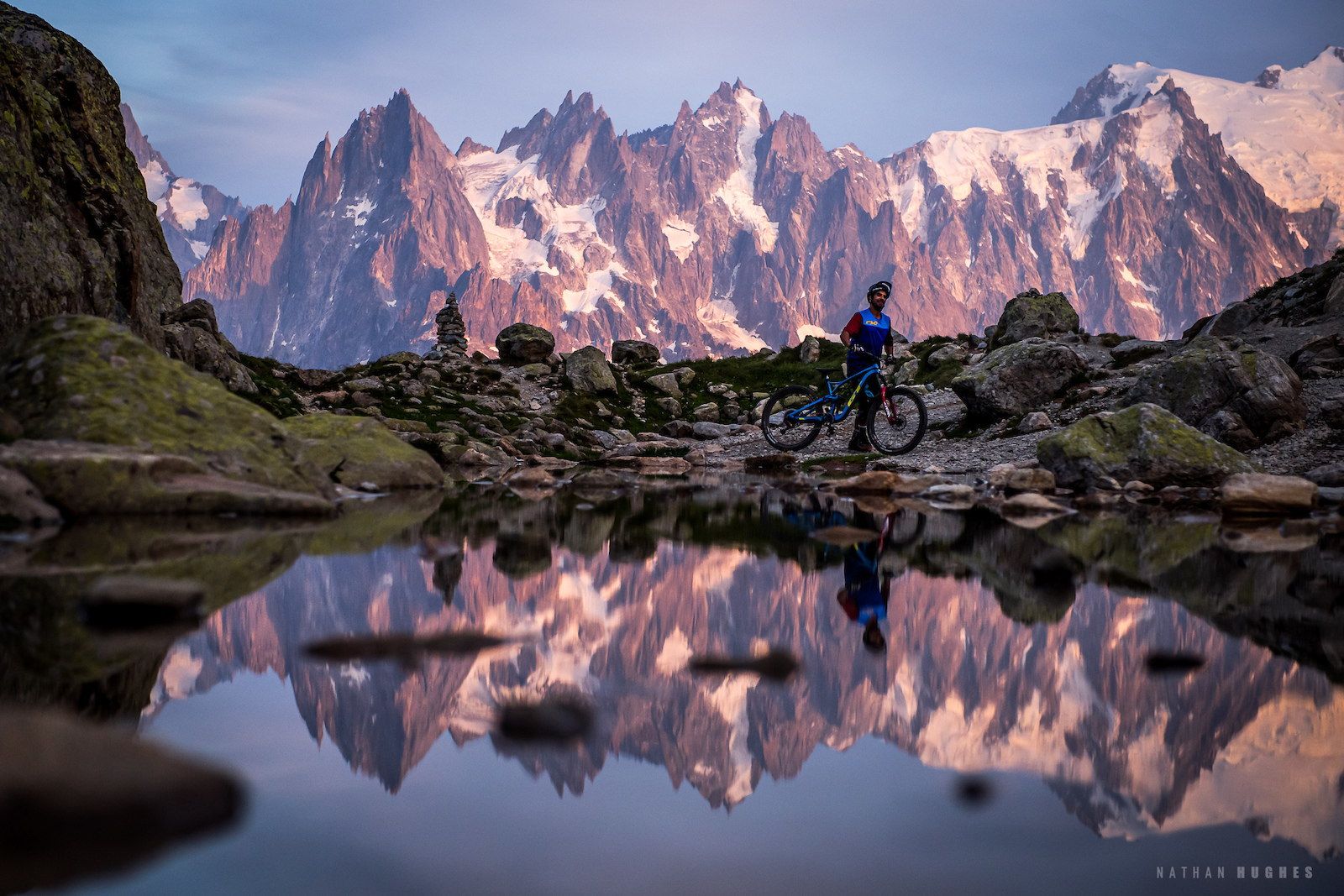 If big tricks weren't happening, we decided to go all-in on the location and reach this almost inaccessible spot with a perfect reflection of some of Chamonix's most stunning peaks. The long and technical traverse, hiking over 1000m vertical with the bikes on our shoulders plus the camera gear and trail tools, stung, but not as much it did later on when we discovered our shots were somehow kind of average. 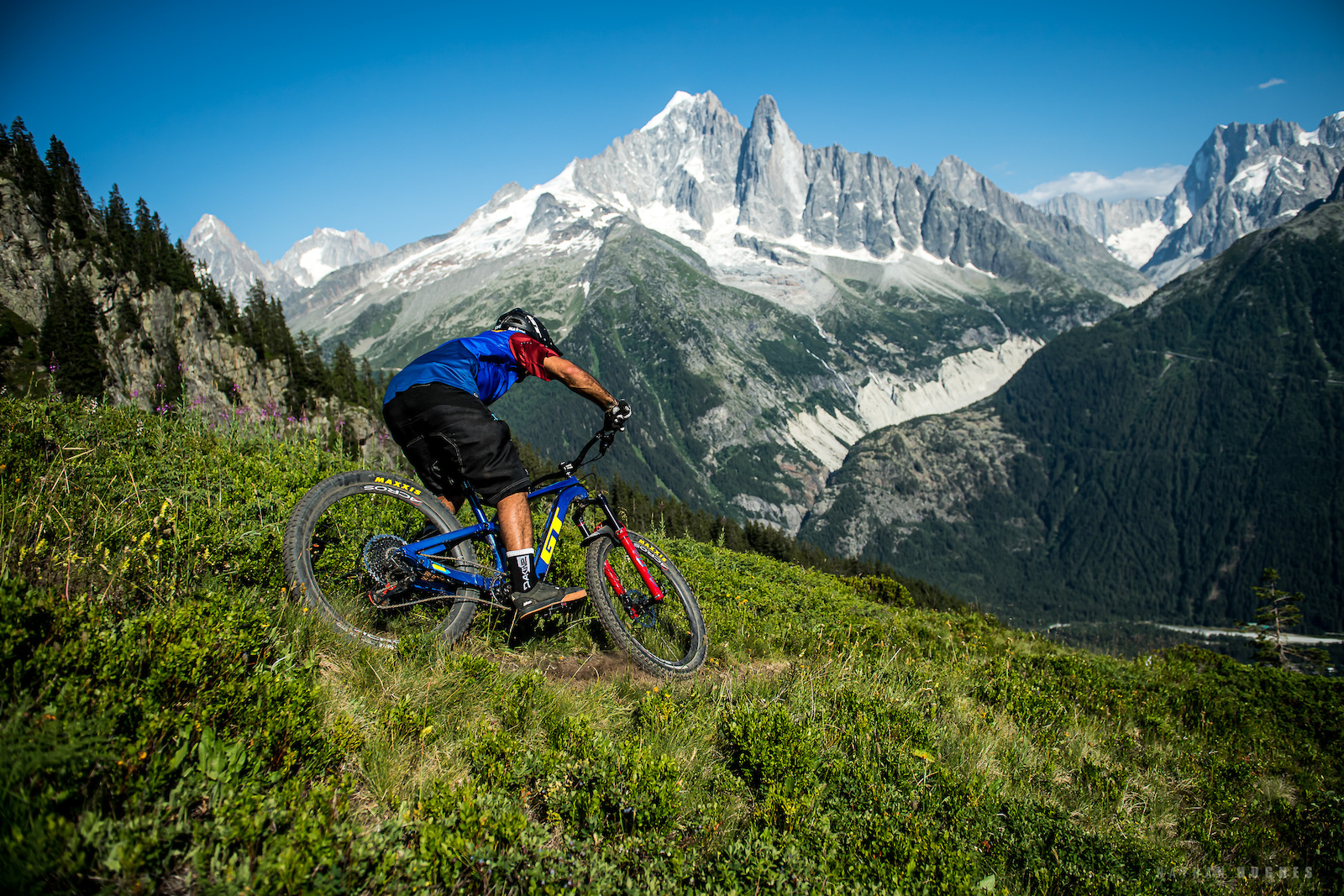 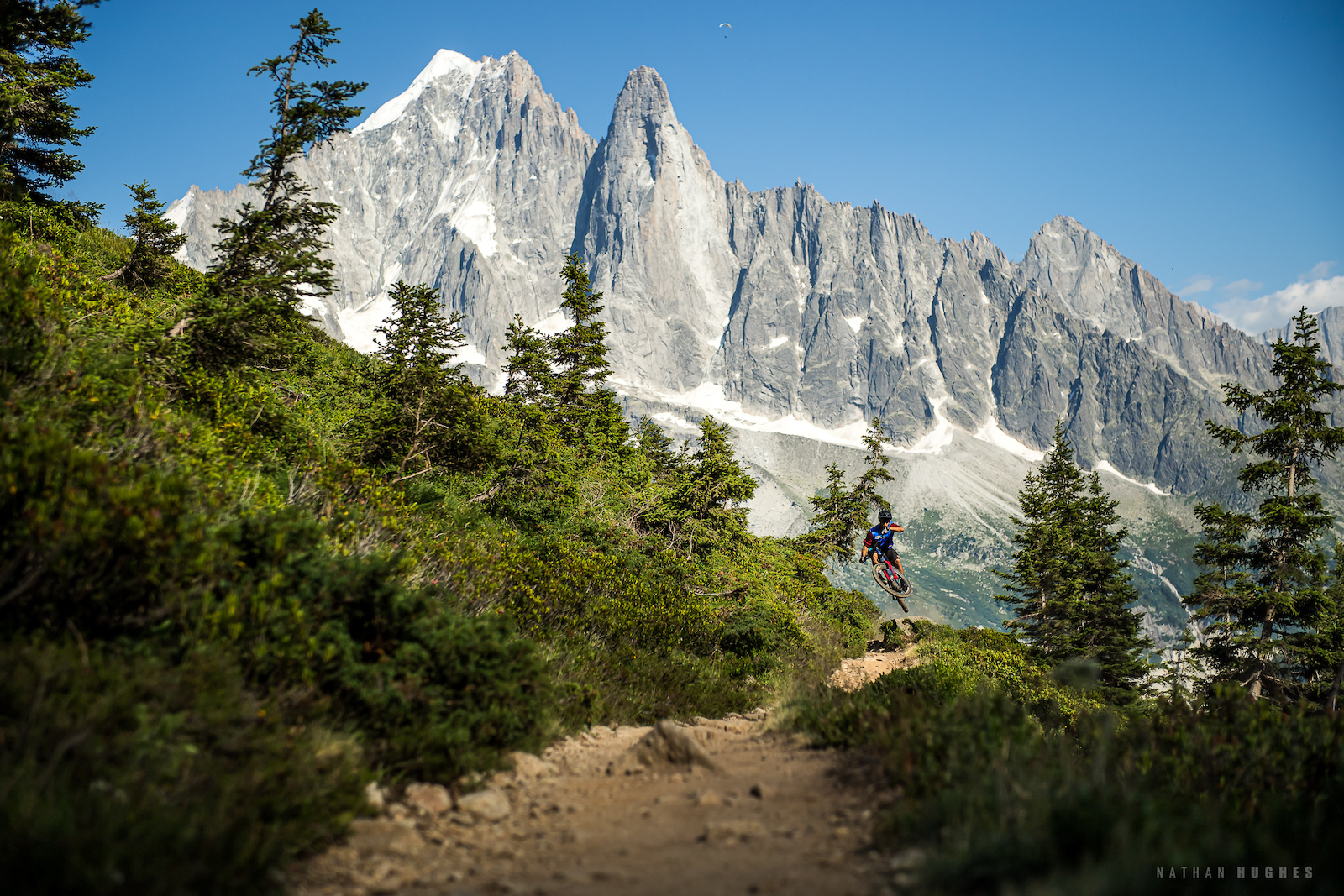 Determined to make something stick, Amir decided to extend his stay and we were back at it the next day, a little lower down the mountain at another lake en route to the previous spot. This was our last chance to make it happen and realistically things didn't look good. The sky was grey and uninspiring and we were both shattered after trying so hard for mediocre stuff. Still, we found the ideal place where Amir could pop clear of the horizon in the reflection. It was terrible to ride... super rough and janky, a risk to get off the ground for sure. We started half-heartedly stacking rocks to smooth the steep transition. We packed lumps of turf in between to hold it all together. The doubt was pretty palpable. What we were doing? Sunset wasn't even going to happen. Two hours and a few iffy test shots later, clearly it was time to cut our losses and go home. You can't force these things; we knew from first-hand experience.

Spotting some changing light in the corner of the valley after packing everything up, we reluctantly agreed to hang around a few more minutes, even if it meant another 1000m+ descent with the head torches. Back in position and the sun beamed in with 10 minutes to go. Amir finally dropped in with golden light on the Aiguilles of Chamonix behind him, bouncing off the smooth water, and reflecting a warm glow on our grinning faces. Although not pictured, those were some big smiles. 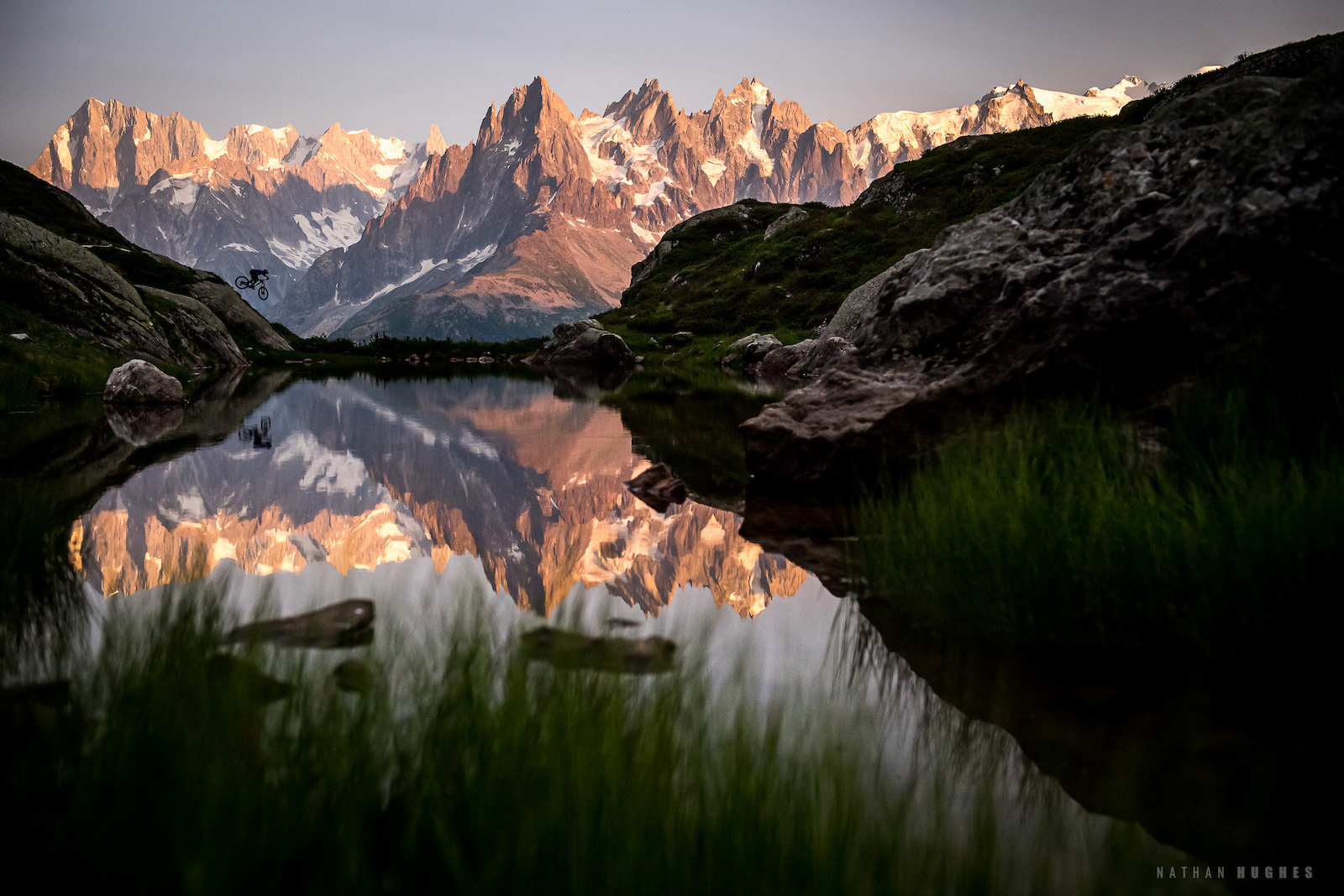 In the end, our shot made the top 260 of some 60,000 entries and found it's way into the 'Playground' category of the 2019 Redbull Illume book. Of course, as a photographer, if you took the perfect shot, you'd be all done... Luckily this isn't over! Thanks to Amir for his talent, time and patience, and here's to looking ahead to the next Illume, just two years away this time in 2021. 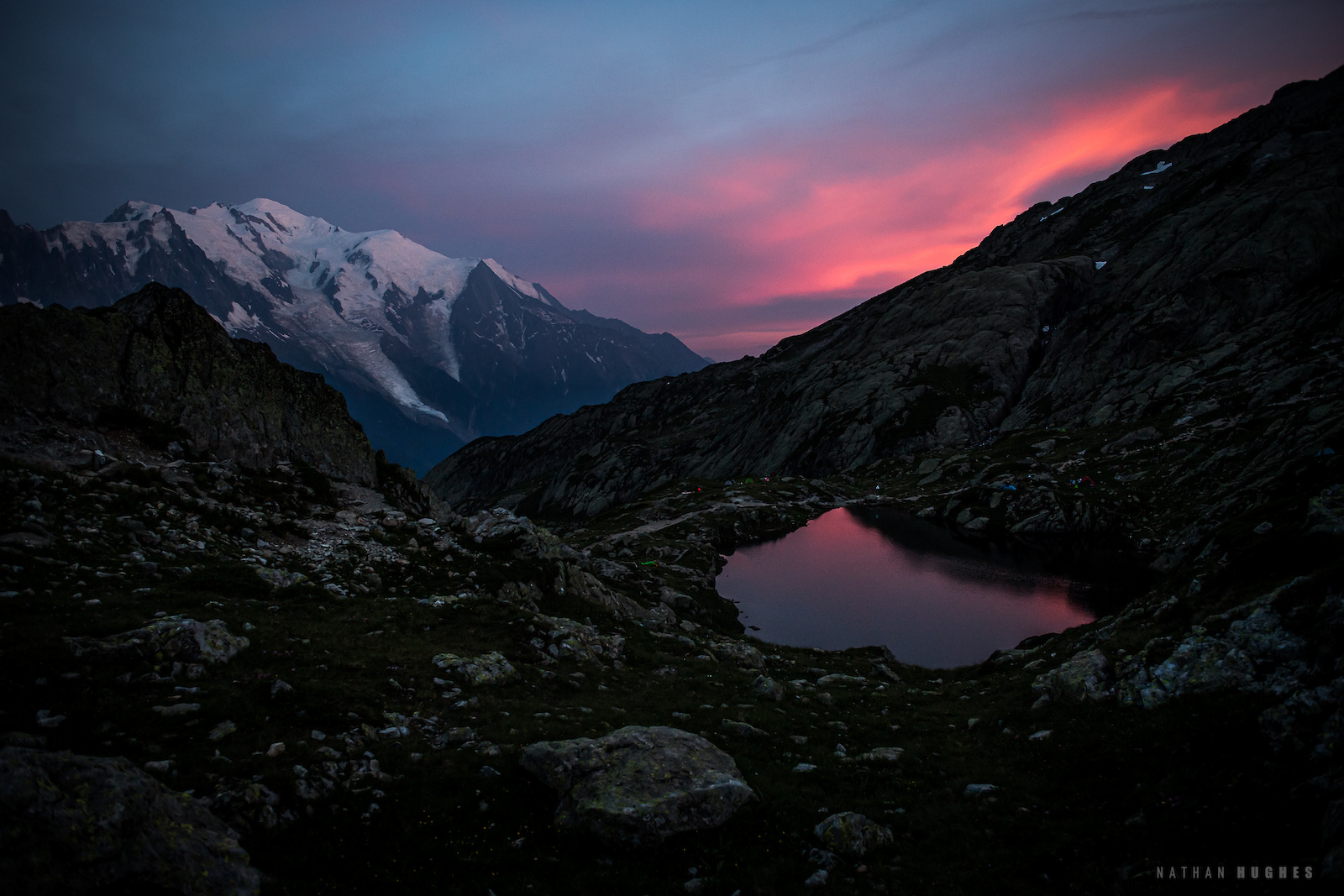 jamesdunford (Dec 12, 2019 at 4:14)
Just FYI, the riding here is rubbish. Nothing interesting or worthwhile.

Kind regards,
A local who doesn’t want you to realise how absolutely incredible the place is for MTB.

Mantaray (Dec 12, 2019 at 3:39)
Broke my wrist in Morzine on the third day of a 3 week biking holiday in the summer. Ended up doing a 3 week hiking holiday instead and went to Chamonix. These photos truly sum up how epic and stunning it is there! Beautiful.

nyhc00 (Dec 12, 2019 at 4:40)
Had a similar thing happen to me this past summer. 4 days before flying out to Morzine I broke my neck riding(C7 fracture) and luckily was cleared to travel. Hiked around Morzine, Zermatt & Chamonix, Now all i want to do is go back to Cham regardless of the season. Its truly a magical place.

oskare (Dec 12, 2019 at 5:56)
Amazing! Any chance of getting these in a bigger more wallpaper friendly resolution?

Thema (Dec 14, 2019 at 4:46)
This pinkbike.
You have a palette of resolutions that doesn't make any sense.
Change it to/add some common screen sizes

mtbandskiforlife (Dec 12, 2019 at 11:12)
Chamonix is a magical place and I remember going there was a life changing experience. I went there for the first time about 10 years ago while I was working on the eastern coast of France right out of college. After my first trip there I was working 6.5 days a week and drove 8 hours across France just to ski one day in Chamonix. 100% worth it. I've always wondered how the mountain biking is there and have been curious about doing the Haute Route in the summer.

brookdaly (Dec 12, 2019 at 15:14)
Can now do it on an E-mtb - spent last summer helping out a company there who have pioneered the best route over 6 days. It's seriously amazing. I'm not an "E-Biker" but the descents are sweet, days are long and scenery is out of this world.

corona (Dec 12, 2019 at 3:23)
It must be nice to go to a place, that probably doesn’t have garbage laying around and hordes of people. Hoping they left no trace.

jurassicrider (Dec 12, 2019 at 4:24)
Yeah....unfortunately, this is not the case for Chamonix, at least in the summer. And hikers here are definitely not very kind with mountain bikers ... the mountains are way less crowded in the middle of the fall though. That's the best period if you want to have little a bit of tranquility here.