In the EWS Pit with Yeti Mechanic Shaun Hughes 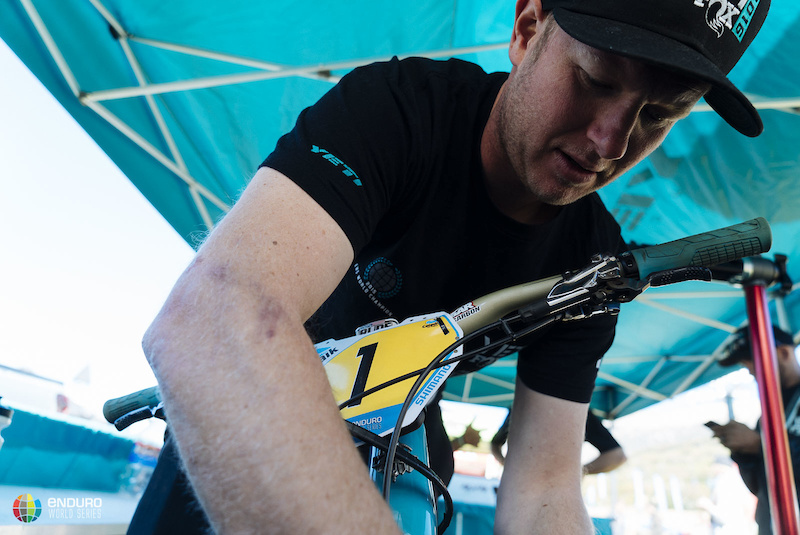 We all know that coffee and mountain bike racing go together like… well, coffee and mountain bike racing. We caught up with Loam Coffee Ambassador and Yeti mechanic Shaun Hughes who came off another successful Enduro World Series season wrenching for EWS champion Richie Rude as well as Cody Kelley. The questions we were dying to ask was what life was like on the road this past race season and of course where and how coffee was part of Shaun's routine. Ready? Let's start this…


What was the last season like for you on the EWS?

Last season was busy. But coming into my 9th season with Yeti, it's business as usual. Richie and Cody are both quite technical with their bike setups, so there is quite a bit of testing and fiddling between races (not just when we get to the next venue). So even when there were a few weeks between races we’d still be busy fine tuning things on the riders' setups. That meant there was always something going on. Also, I have to keep on the bike myself. Very important for my headspace to be able to ride as well. No ride makes for a cranky Polar Bear. 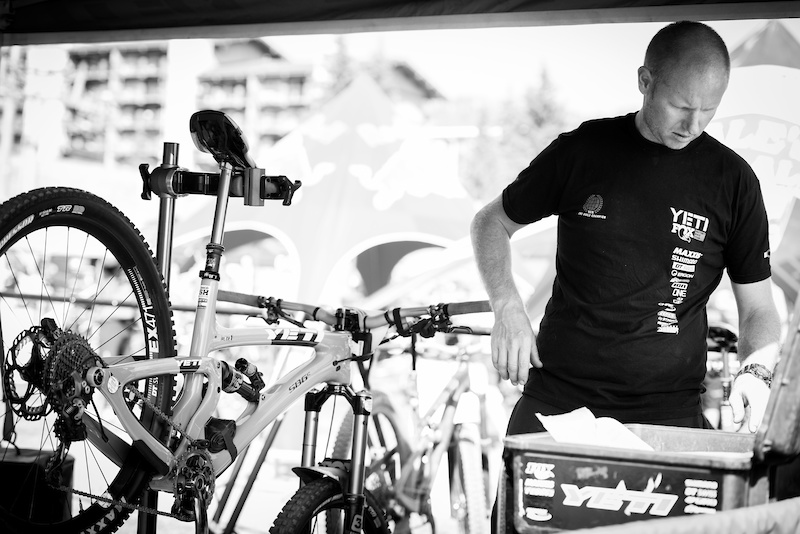 Why does a typical race day look like this?

A typical race day is actually pretty chilled. Wake up and fuel up with breakfast and coffee. I usually go over a few notes with the guys about what they are feeling with bike setup then head down to the pits a few hours earlier than the racers just to get ahead of things. The bikes are always dialed in the night before, but I always triple check them. Attention to detail is the main thing with my job. Pressure check on tires and suspension. Make sure there are some food and water in the pits for the racers and then get spares ready for most situations that could go down that day. Nothing worse than having to need a spare and I don’t have one in my inventory. Wait for the racers to get to the pits and go over a few more things with them and set them on their way. Sometimes they are able to come back for service between stages, sometimes they aren’t. Race day can be extremely busy, but quiet enough for me to be preparing for the next event.

My busiest days are the two days leading up to the race day. This is usually a very early start and a very late night for both days. The practice days are when the guys break most parts and get flat tires so it's usually full on. Sometimes I’ll spend the whole day in the van shuttling the riders for practice or even riding with them and helping out if anything goes wrong, but I can’t do any of that on race day. 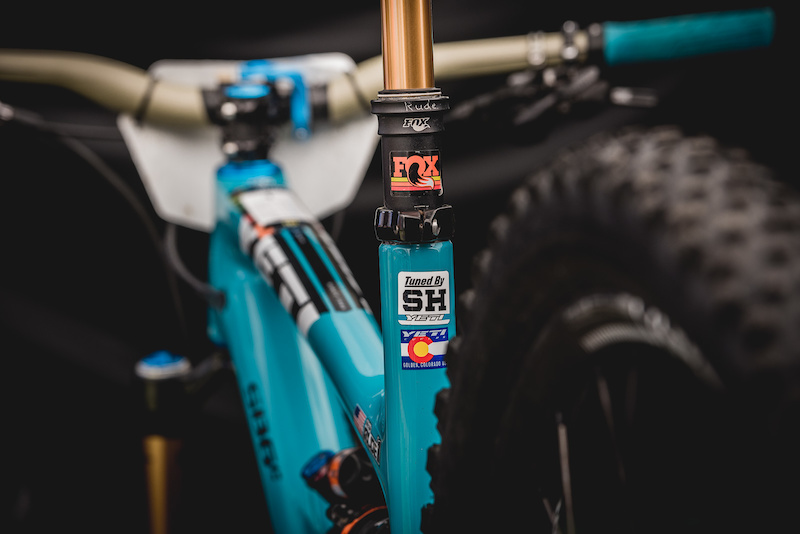 How does coffee fit into your routine in the pit?

Coffee is kinda a big deal for me. I love the taste, the smell... everything about it. Everyone on the team is in the same boat. We all love coffee. So if you are the first awake in the team accommodation you are the guy making the coffee. When I get to the pits I’m usually pretty busy, but my team manager always turns up with a fresh coffee for me. Richie is great for sourcing out a good brew anywhere in the world. Also, doing a lot of late nights, it always helps keep me focussed until I finish my work. So on a scale of 1 being not important and 10 being extremely important part of the routine, coffee is up there at about 20.


What is your go-to brew method for coffee while on the road? At home?

At home, my go to brew method is my Atomic Stove top. This thing is a work of art, made in Italy. It makes coffee better than anywhere in the world I have been. It is a simple, yet perfect brew. I think there must be some magic pixies in that stove top. It is a brew and milk foamer type thing so I can make my flat whites, cappuccinos, or anything else that takes my fancy.

On the go, I have a MiniPresso hand-held jobby. It is surprisingly good at making a nice little espresso shot, especially with some freshly ground Loam Coffee in there. So I always carry a hand grinder as well when I’m traveling.


What was the craziest (or funniest story from last reason race season?

Whistler EWS was by far the craziest race from last season. After hearing Richie had flatted on the second stage (still posting up an amazing time) I was shown some video footage of him riding by a buddy who was on track. Richie hadn’t come into the pits yet, but I knew he needed a new rear tire after seeing the footage. He was just riding the rim on Stage 2 like he still had a tire full of air. I kinda knew I had my work cut out for me to get the rim in good shape again so it would hold a tubeless tire. When Richie actually made it to the pit (after he had put a tube in at the bottom of the stage) I was shocked to see only a small dent in the rim, and only needed to file off a few sharp edges, then the tire beaded up perfectly and he was off again. He would later do some amazing huck-to-flat off the GLC drop and ultimately win the whole race.

Another worthy mention of a crazy story was Cody riding a motor scooter in Italy last season, but I think there is still an ongoing damage bill on that one… 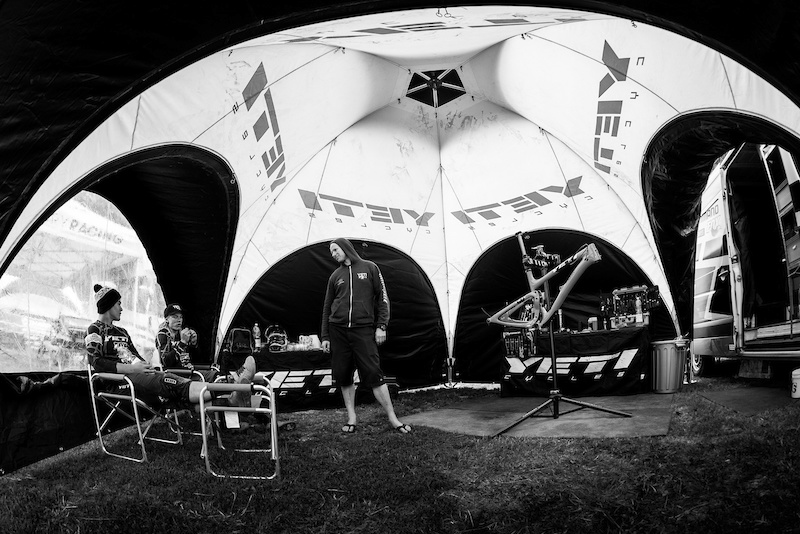 How stoked were you for Richie Rude to win the EWS?

I’m going into my sixth year of knowing Richie and being his mechanic. I am stoked for everything that he has achieved and the way he has achieved it. Backing up a championship like he did is nothing short of inspirational and I hope he can keep the momentum rolling. We have a great little team going with Richie, Cody, Damion (team Manager) and myself and it's great to be riding on Richie’s success. Gotta thank Jared Graves also for helping shape Richie into the rider he is today.


What is your favourite Loam Coffee?

I really like the Bike Park Blend. It was the first Loam Coffee I tasted, and it just hit the spot perfectly. 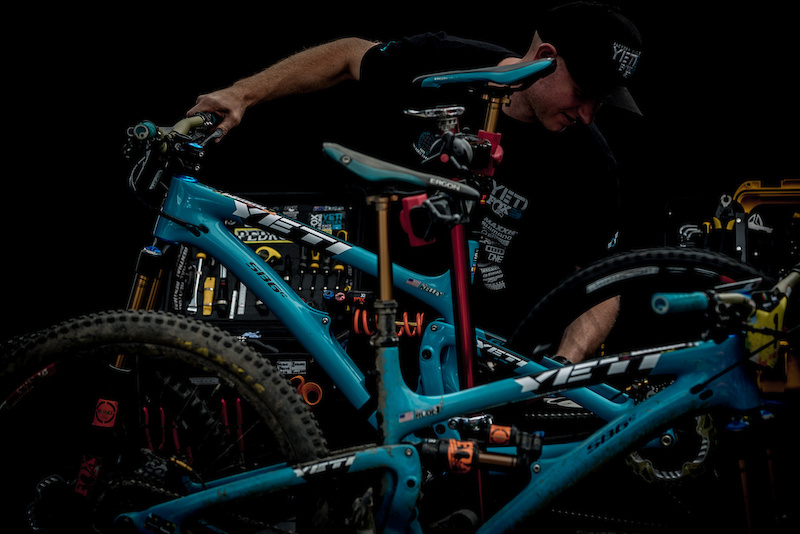 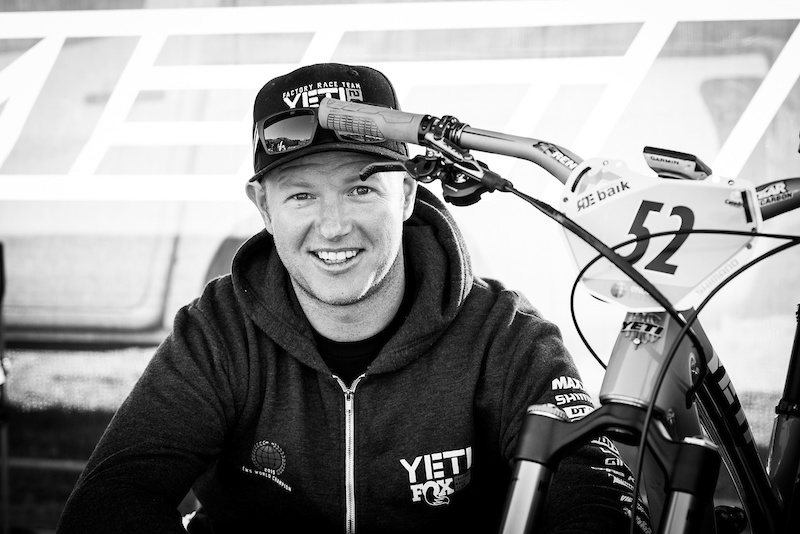 Shout-out to Damion Smith at Yeti for supplying the photos and all photos are by Dave Trumpore except the article cover pic which is from EWS.

Hook us Yeti owners up with some tech tips. SB6C with DHX2 coil 400# spring, rider weight about 175 kitted. Tell me the magic number of clicks to haul ass like Richie Rude