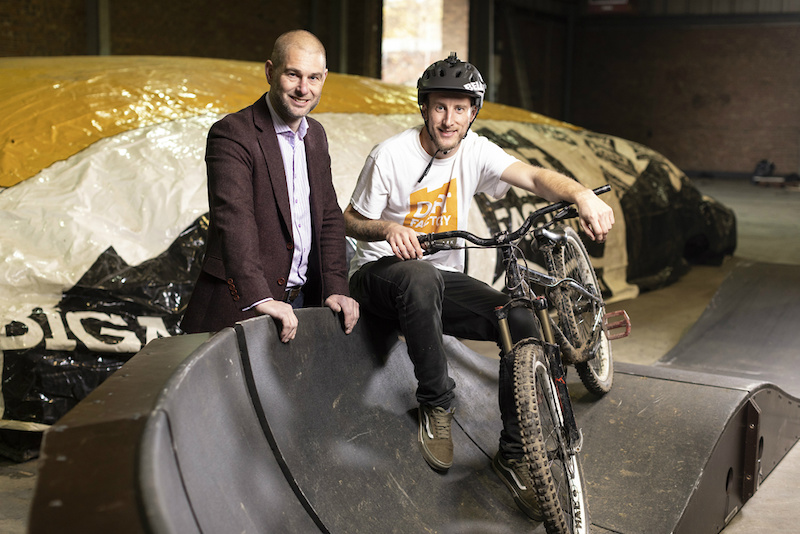 Canada has them, the US has them, Europe has them but indoor mountain bike parks never really took off in the UK... until now. If you want to escape the British rain and ride inside, Dirt Factory have found a premises and are due to be fully open to the public in late March.

Dirt Factory, who first reached their crowd funding target of £400,000 in 2016, will open as a pop-up being created inside a disused 25,000 sq ft warehouse off the Mancunian Way. While most indoor parks are made from wood, around 2,000 tonnes of reclaimed soil will be used to create the Dirt Factory Pop-Up. The dirt will be sculpted into "a range of exciting bike trails and features, designed for riders of all ages and abilities". It also means that that the team are able to continually evolve and change up the park layout, keeping it fresh for return riders.

The site at Mayfield, next to Manchester Piccadilly train station, will create up to 10 full and part-time jobs. The team will be supported by more than 50 volunteers who have signed up to support the venture. The Dirt Factory Pop-Up will be open for up to two years before moving to a permanent home at a larger facility in Greater Manchester.

In the long term, the 24-acre Mayfield site will be transformed into a world-class urban quarter, delivering new office and leisure space, the first city centre park in more than 100 years, as well as 1,300 homes and a hotel.

andybloomer (Feb 8, 2019 at 5:35)
Indoor bike park!? You were lucky. We lived for three months in a brown paper bag in a septic tank. We used to have to get up at six o'clock in the morning, clean the bag, eat a crust of stale bread, go to work down mill for fourteen hours a day week in-week out. When we got home, our Dad would thrash us to sleep with his belt!

chainspotting (Feb 8, 2019 at 4:58)
You must be a southerner because you would know Northerners are highly unlikely to self-proclaim anything. We are a modest bunch.
It's usually soft southern shandy-drinkers who see us as "well-'ard" in comparison so have to make it known to everyone else that we see ourselves like that.

Go ride the South Downs in your full face.

My can of petrol:
North = Scotland, otherwise you're a Southener.

Franziskaner (Feb 8, 2019 at 6:07) (Below Threshold)
@chainspotting: Yeah, go ride the South Downs in your full face, just like that talentless southern sack of shit Brendan Fairclough does.

thenotoriousmic (Feb 8, 2019 at 9:23)
f*ck this. If your not taking hail stones to the face are you even mountain biking?

drjonnywonderboy (Feb 8, 2019 at 9:39)
Come up to the Lake District and we will show you how its done. Don't forget the lemonade for your shandy.

thenotoriousmic (Feb 8, 2019 at 9:58)
@drjonnywonderboy: yeah go and ride some of the National trusts worst crazy paving.

Most of his other stuff from videos in Surrey and wherever else is dirt jumps in a piss pot.

Uncled (Feb 9, 2019 at 2:29)
I live in the actual North and have never heard any one self proclaim that kind of thing. Your obvious lack of wit has resulted in some really lame stereoptyping, would be like me noticing you come from Dorset and your parents call you Timmy, that kind of thing. Timmy.

Denning76 (Feb 9, 2019 at 5:56)
@chainspotting: Just a full face? Never met a biker on the South Downs looking like anything less than the Michelin Man.

Bugmaister (Feb 10, 2019 at 14:14)
@chainspotting: Too right matey they've never seen a hill let alone been down one, bloody flat landers

Puddings (Feb 10, 2019 at 16:09)
remember when the foundry opened as the first dedicated climbing wall in the country in Sheffield. There was much piss taking about how it would never survive (up until then all walls had been in sports centres, scout huts, schools etc), and how all the proper climbers would be out on the Peak climbing proper rock. Rammed pretty much from day one.
I am stuck working in Manchester for the next year and an evening playing in here will be so much better than sat in a hotel gym trying to keep some vestige of fitness

A bit gutted its so far away from where I live (the south coast), but if it takes off, hopefully more will pop up around the country!

kingbob734 (Feb 8, 2019 at 4:57)
I'm really excited for this. Before I really got into mountain biking, I used to travel to a lot of skate parks, so this will be a really good way for people who want to give it a try and just want to get on with it without the changes in conditions.

philv (Feb 8, 2019 at 5:17)
With Graystone Indoor Skate Park opening just before Christmas this is good news, there's a lot of varied biking in the North West now.

johntaylorphotos (Feb 8, 2019 at 12:38)
Bollocks to Clayton Vale... This should be amazing, now if only I had a mountain bike after my flat was broken into and it was stolen,

trycycles (Feb 9, 2019 at 11:07)
Yes, that is correct. The money raised by shareholders during the crowdfund will not be used on the pop-up. There is separate funding in place to cover the costs of the trail build and fit out alongside additional funding to bring in community groups to try out the pop up.

drjonnywonderboy (Feb 8, 2019 at 9:02)
We have great trails up North. Its the Southerns who need something like this. I live in South Manchester so I'm not complaining

chedabob (Feb 8, 2019 at 10:29)
Nothing official has been said yet, but the tweets and insta posts suggest it's in the next few weeks.

There, fixed it for you.

trycycles (Feb 9, 2019 at 11:22)
@Kirky86: The money raised in the crowdfund bought shares for the investors of Dirt Factory. That money needs to be spent to open an indoor bike park that will give a good return on investment. The search for the right building, the right land lord and along with the stars aligning with planning consent is a slow process. In order to give shareholders what they invested in it is essential that the money is spent in the right place, the right way, regardless of time.
The pop up presents an opportunity to show case and prove the concept and to create a community that will support the applications for a bigger indoor park. This comes at no expense to shareholders.
Dirt Factory is very fortunate to have the opportunity to open an indoor bike park in the heart of Manchester, even if this is only for a couple of years until a more permanent home can be found. The company is thankful for the support of its shareholders, stake holders and supporters that have stuck by us over the years.

Kirky86 (Feb 17, 2019 at 12:46)
@trycycles: Having missed the initial kickstarter and joining the game late, can you explain how the 'shares' were purchased, what value they had etc? I've never seen a kickstarter based on a percentage share hold of a company, only offers of 'free this' or 'reduced that'.

Was it a literal 'we're now worth 400k, you're now invested in the company by your contribution' type deal?