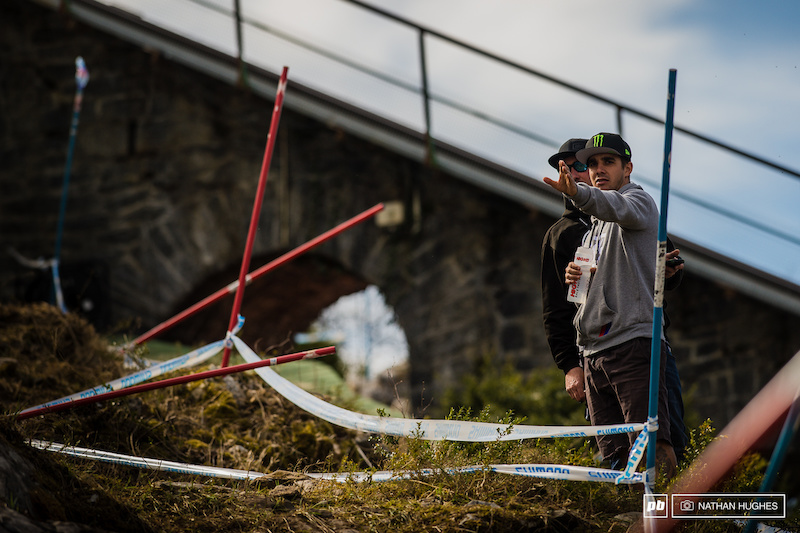 Following the news that Sam Hill wouldn't ride in the first round of the 2015 World Cup in Lourdes due to an old injury, it has been announced that the initial problem was worse than both Sam and the team thought. Earlier today Sam took to Instagram and told followers he'd had surgery not long after flying back from France:


Unfortunately, this means Sam will be out for the next few races. We'll hopefully see him back in action later in the season. We spoke to team manager, Nigel Page to find out how Sam is doing and when he's expected to be back on the bike:

andrewdoud (Apr 22, 2015 at 11:35)
Maybe this means we will see new guys like mike jones on the top step of the podium. Still gutted we won't be seeing the legends duke it out though

snl1200 (Apr 22, 2015 at 12:46)
I've waited too long for WC racing.Shame not to get to see some of my favoirites but I don't want to wait longer for this season to start. First round was great and I look forward to an amazing season regardless!

panchoy (Apr 23, 2015 at 8:15)
I think Sam would have been the one able to keep up with Gwin's time from split 1 to split 2 and may have taken the win in round 1..If Gwin wins the next 2 rounds, this world cup season is going to be boring...I hope Rat boy gets his speed back for the next round..if not..I hope Bruni, Brosnan or Gee wins the next round.

Laugh? I nearly cried. After 'Sam heal', 'Sam ill' and waki's brilliant 'nah' warmed me up, this panda business had me rolling. Top form on the funnyshit today.

Matt-Pau (Apr 22, 2015 at 15:00)
After meeting Sam in person in Lourdes (I was lucky enough to exchange a few words with him, and I have to say that he showed himself to be a really accessible and humble man), I can now say good luck to him more sincerely than ever ! Heal up fast Sam ! I think we are all pretty excited to see you back in a few weeks !

jrocksdh (Apr 22, 2015 at 7:47)
Dang it...3-4 mnths at least,...usually, shoulders take along time. Think about how many different angles/rotation, and now place force upon each said angle. I had a torn labrum repaired. Long(proper) recovery, but that shoulder is now stronger than the other (altho other has had 3deg sep way back)
Take your bcaa's for quicker recovery, and lots of pool time once pt table time nearly over!

scotttherider (Apr 22, 2015 at 6:08)
Hopefully next season bring a healthy season for ratboy, hill, gwin and all other comers! Want to see a battle royal with no excuses!

MrDuck (Apr 22, 2015 at 10:48)
Well Sam was the inspiration for me to get into downhill riding. So I followed the suit and went out with a shoulder injury as well, hope I'll come back as fast as he does, 'cos he obviously will!

dirtyknobbies (Apr 22, 2015 at 21:04)
Bummed for Sam...but man..guessing this is still a reoccurring injury from Ft. Bill back in what? 2010 when he freight trained his demo over the rock garden in practice? He was bloody ripping mach 20! With the majority of podium/top riders out with injuries...goes to show the level that has to be pushed to be #1. Heal fast Sam, rooting to see the rainbow stripes on you in Andorra!

neimbc (Apr 22, 2015 at 4:57)
Makes the WC season suck without him on a charge. With all the big guns injured - Gwin may have an "easy" season. Sam is the one guy I love watching pull lines that no one else does.

neimbc (Apr 22, 2015 at 8:00)
Very true, just that those top guys (Sam, Greg, Gee, Stevie, even Rat now, when 100% healthy are a consistent threat to the podium. Injuries and missed training hard opens up a few slots in any sport. Agree?

src248 (Apr 22, 2015 at 8:47)
I'd say Aaron, Loic and maybe Neko are the only ones with much of a chance of picking up a win at this point, and Gwin is FAST. There's definitely less competition for the top spot right now.

tobiusmaximum (Apr 22, 2015 at 17:20)
Injuries are part of the game. If you don't risk em, you don't win. If you don't get em, you might win. But coming back from them is another game. If new faces fill the spaces left by injury, and get 'comfortable' with winning, how do you get back on them? That's tricky. Knowing you're the 'best' helps. But the best changes if you spend a year laid up. All things considered.. f*ck it, Sam is injured again!??! Bollocks. I want a stewards enquiry or something.

russthedog (Apr 22, 2015 at 14:54)
What a bummer, was looking forward to him having a solid season looking fit and fast. I'd be surprised if he races anything this year except the last couple

MendelMu (Apr 22, 2015 at 15:38)
Bummer, so many of the top contenders are battling injuries. Its a part of the sport but damn I wanna see the best battling it out all season long.

razacr (Apr 22, 2015 at 17:50)
hope him a quick recovery, that's part of the sport, his positive energy, professionalism and focus always gave him resuts! Keep it going Sam!!

Sam Hill you are the best

MAtechshit (Apr 22, 2015 at 5:57)
I hate that they are not more specific about injuries, is it a rotater cuff tear, ac joint seperation, fractured humerus, labrum tear? The physios around here want to know!

beeboo (Apr 22, 2015 at 9:15)
Heal fast man! After last seasons standing you must be itching badly to get back and have a taste of victory again!!!

big-ben-rides (Apr 22, 2015 at 7:28)
Bummer for Sam, but all the injuries to top riders like him, Ratboy, Steve Smith, and Gee really works in Gwin's favor. If he is able to dominate the first half of the season he may be able to ride those points to an overall victory...though there is always Bruni, Troy, etc. to challenge him.