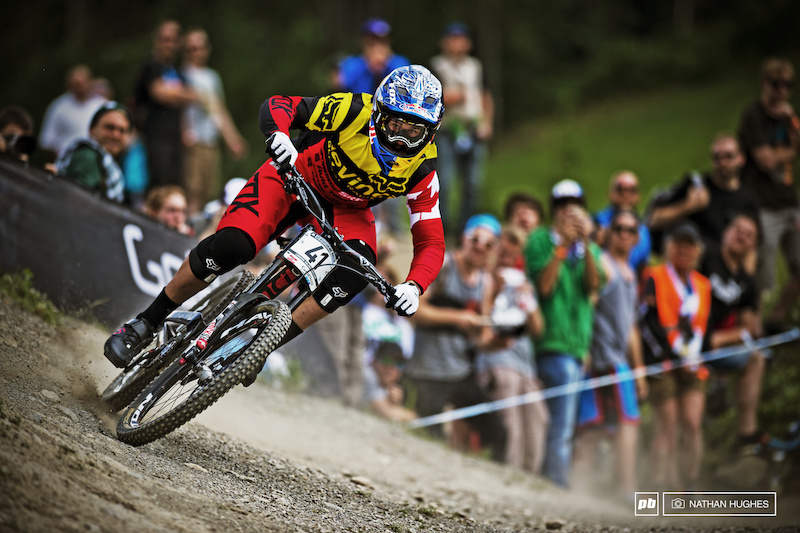 With the first round of the 2015 World Cup DH season well underway in Lourdes, France, there's been one racer noticeably absent from the proceedings: Devinci Global Racing's Steve Smith. After a breakout performance in 2013, Smith was forced to miss the first two stops of the World Cup last year due to an pre-season ankle injury, and then went on to suffer another injury at Mont Saint Anne that effectively took him out of commission for the remainder of the season.

Unfortunately, it looks like the Canadian Chainsaw Massacre's bad luck hasn't ended, and according to Devinci Global Racing, "Steve Smith will sit out the first round of the 2015 UCI World Cup. Due to an unrelated injury to his navicular bone in his foot Steve has been sidelined for recent weeks."


Hopefully we'll see the Sender back in action at the second round of the World Cup, which takes place on June 6th in Fort William, Scotland.

ryan83 (Apr 9, 2015 at 12:55)
Sigh...I just broke my navicular bone last week and it totally sucks. While it also took place on my mountain bike I'm sure I was doing something much, much less rad at the time. I wish you a speedy recovery Steve! And for everyone else out there be careful as there's no worse way to start a season than on the couch..

All the best Stevie Smith. Looking forward to you racing again.

dvp8 (Apr 10, 2015 at 1:22)
i heard that his foot doesn't bend up because of the way the bone is grown in. So hard impacts there's less movement in the foot and ankle area which makes it much more vulnerable to fracturing.

bigburd (Apr 9, 2015 at 23:29)
Not the fake , knock of ones getting sold on the cheap over here ! Been reports of them litterally falling apart in peoples hands during use.

simooo (Apr 10, 2015 at 16:21)
A high RPM bladed chain getting whipped around? no worries! Just make sure you have your goggles and chain mail suit on!

Ryezy (Apr 9, 2015 at 13:46)
Solid work on the update Pinkbike! Glad to see a Canadian website is following one of Canada's best MTB Athletes..so well! "Work hard in silence Steve let your success be your noise"

xcjunky (Apr 9, 2015 at 17:09)
Hope to see Steve healthy at Ft Bill!! I see on the entry list that four Canadians are taking part: Mark Wallace, Forrest Reisco, Jack Iles and Casey Brown. All the best boys and girl!!

naveednasir (Apr 9, 2015 at 14:22)
The DH world is a lot tougher when Stevie won the overall, now he'll have to contend with a rejuvenated Gwinn, Hill and fight the new stars of the sport like Bryceland and Brunis, he needs to be 100% to stand a chance.

DaveJube (Apr 9, 2015 at 14:52)
Damn! i ws looking forward to a healthy stebie coming online to the world cup this year. hopefully he will be better by for bill

HackSawyer (Apr 9, 2015 at 21:58)
Get well soon Stevie! Injury is a party of this sport, always has been and will be. But for those of us who truly love this shit, we learn to fight through the pain to never let it slow us down. That's just how it is.