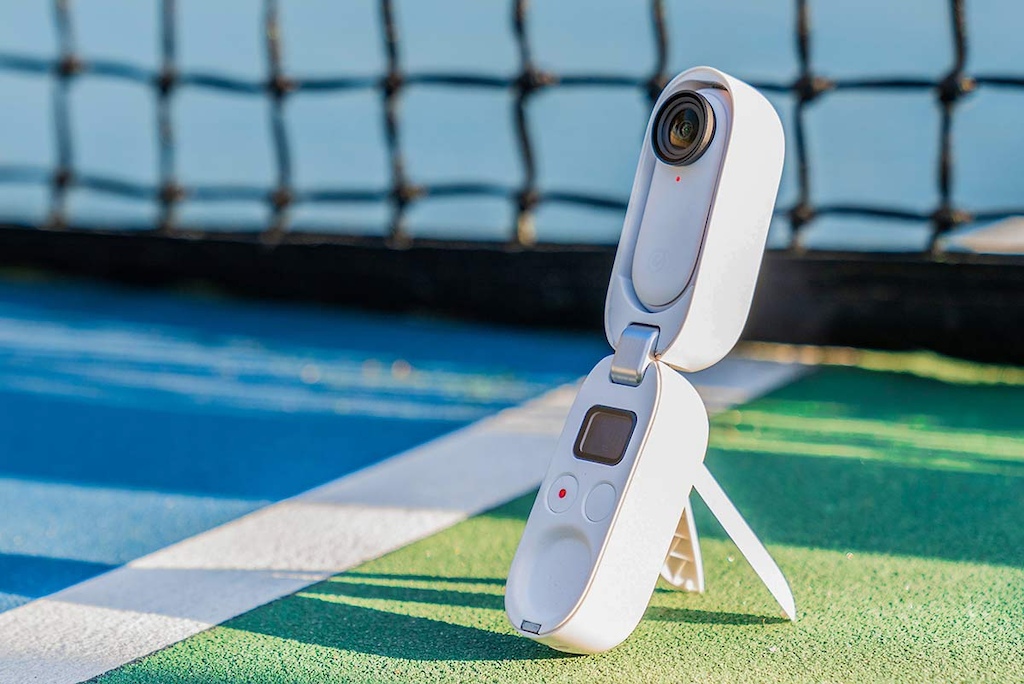 The tiny camera in its multi-purpose charging case.
Insta360’s new GO 2 camera is about the size of a USB stick and weighs 26.5 grams, but it packs in plenty of usability and some significant improvements over its predecessor.

The world’s smallest action camera has a larger sensor, better image quality, and quadruple the storage space compared to the original GO. It also includes a clever charging case with two stowable legs that allow it to double as a tripod.

The GO line is Insta360’s only non-360-degree camera series, with a maximum 120-degree field of view. There are also settings for a narrower 110-degree view and a linear view. Unlike the GO, which was splashproof but not waterproof, the GO 2 is submergible to 13 feet. Its image stabilization is impressive for its size.

The downsides are that the GO2 shoots at a maximum of 1440p, rather than 4K video, and that it has just 28 GB of storage space.

medallion74 (Mar 11, 2021 at 10:00)
Just what I was hoping for, another POV camera to get those shots of me being average, slower, chubby and maybe not as awesome with interesting choices in old school jams in my edits. I've got like 6 followers-ish. Gotta have this!

Curse-of-the-foot-long-sub (Mar 10, 2021 at 19:50)
i watched matt jones video with this and bought it instantly the features are incredible hopefully turns up soon!

hi-dr-nick (Mar 11, 2021 at 6:13)
Keep in mind GoPro pulled out of all specialty retailers and will soon only be available at walmart/online. Don't hurt your local shop, folks!

hi-dr-nick (Mar 13, 2021 at 11:01)
@toad321: yeah because GoPro gave the middle finger to local retailers. Surprised you're stoked on that. Keep on supporting the corporate big box stores I suppose!

leon-forfar (Mar 10, 2021 at 15:03)
I just saw Matt Jones' last vlog where he uses one of these. Surprisingly good video quality and stabilization! www.youtube.com/watch?v=PhXn7YBufWM

leon-forfar (Mar 10, 2021 at 16:06)
@ninjatarian: I mean, professional riders are a constant advertisement. It's still cool to see it in use because the footage doesn't lie.

ninjatarian (Mar 10, 2021 at 16:15)
@leon-forfar: I don’t disagree, but (correct me if I am wrong) he totally failed to disclose any sort of compensation from them despite there also being what appears to be an affiliate link below the video. Go ahead and plug products all you want, but be upfront about getting paid for it, especially since it’s legally required in many countries.

leon-forfar (Mar 10, 2021 at 16:32)
@ninjatarian: I guess that's true. He has been pretty upfront about his affiliation with Square Space and seems to be similarly "professional" in tone when talking about this camera. While he may not have said "Insta360 is paying me to promote this", it is pretty obvious he is being compensated. Do we really need people to constantly be saying about everyone who pays them to promote a product? If that were the case, every clip he (or any pro) posted should have a blurb about being compensated by Marin and Redbull and Gusset and blah blah blah with any clip showing whatever it is in use.

djm35 (Mar 11, 2021 at 2:47)
@ninjatarian: If it wasn't a promotion he probably would have mentioned that he paid for it, and probably wouldn't be throwing it around on it's first use.

bombdabass (Mar 11, 2021 at 4:50)
@ninjatarian: It is legally required in the UK that paid promotions are made clear in all media.

yabbaDABdo (Mar 10, 2021 at 17:39)
I have a go. It’s the best camera for Insta POV clips / fb Touch of the button gives you a minute clip. Perfect for capturing the parts you want Go pros are for youtubers. Who wants to edit. Go out and ride.

gnarlysipes (Mar 10, 2021 at 19:34)
Love the size. I was really considering the original (I think)—but it had some silly “feature” like 30s max clip times, right? This one seems much improved.

Youratow7 (Mar 10, 2021 at 19:18)
I’ve got the go pro7, and was hoping they would go smaller and less screens & stuff that’s just no necessary when surfing, mtb or shooting waves. This will be that device, small light and shoots at a decent rate. 4K isn’t necessary for good footage.

Curse-of-the-foot-long-sub (Mar 10, 2021 at 19:52)
in all seriousness (also because im trying to justify my purchase) battery life is 2 and a half hours for a half hour charge and quite a few more hours in the little airpod-like case you carry it in

Curse-of-the-foot-long-sub (Mar 11, 2021 at 18:22)
@PocoBoho: in Matt jones latest video, he backflips his massive 8 foot slopestyle jump, and frame cases his boner log, and the camera stays on, but not sure about a full dh run...

highlandworrior (Mar 11, 2021 at 8:01)
Lol what a load of over priced tat the last one was fucking garbage. This one doesn't look like its any better. Just pay the extra 200 and get a gopro