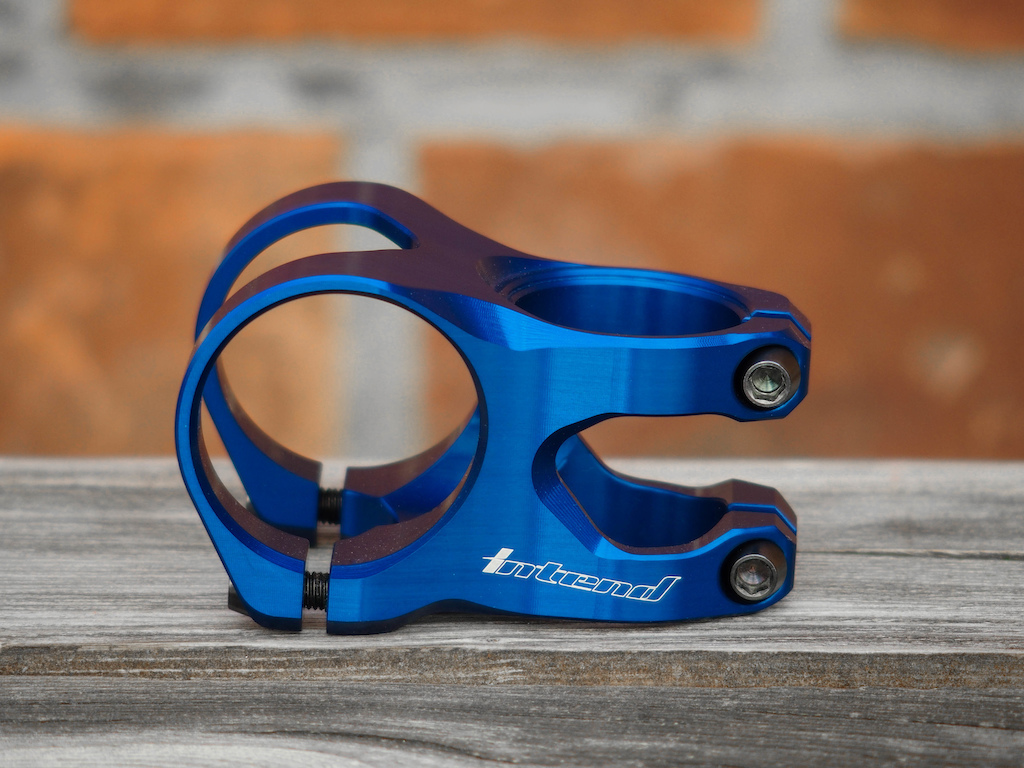 There are components on your bike that, as long as they're strong enough and in the ballpark when it comes to weight, have essentially no effect on how your bike performs. Tires and wheels, suspension, and your drivetrain are all big factors, but your stem? Not so much. Besides getting the right length and clamp diameter, most of us only have to decide if we want a black stem or a black stem. I usually choose the black one. But if your tastes are more cultured than mine (hard to believe, I know), you might go for something a little more high-class. Enter Intend's range of freshly redesigned Grace stems.

Intend is a small, one-man operation out of Germany better known for its lineup of inverted suspension forks, as well as the wild-looking Hover shock that we showed you last year. That man is Cornelius Kapfinger, an engineer who's dead-set on doing his own thing his way. 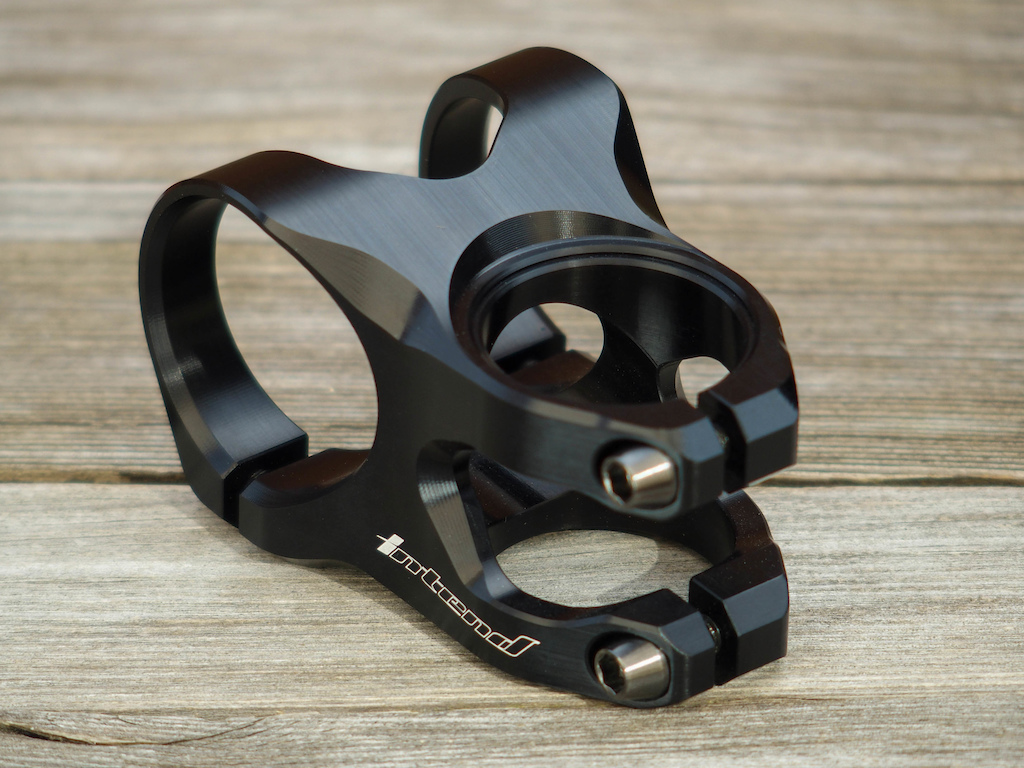 The Grace stem saves weight by not using a removable faceplate, giving it a super clean appearance. 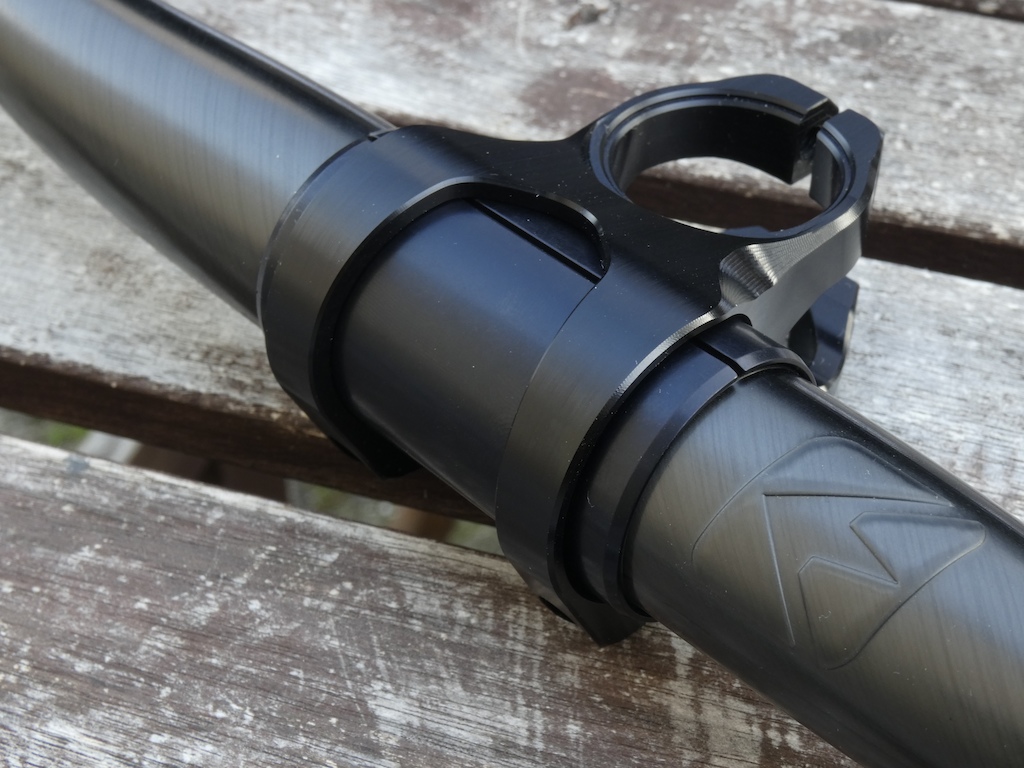 Intend also manufacture their own 31.8 to 35mm shims.

The Grace stem is a one-piece design that forgoes a removable faceplate and the four bolts that would require. Instead, two bolts hold the handlebar that must be slid through the clamp, thereby losing the weight of those two extra bolts and the material that a faceplate requires. This isn't a new idea, of course, but Kapfinger says that it wasn't ideal in the past because many of us were using high-rise handlebars with bends that wouldn't fit through the stem's clamp. "In times of thick handlebar diameters and lower handlebars due to the large 29" wheels, this design is becoming increasingly interesting again,'' he explains.

Handlebars with up to 20 to 25mm of rise will slide through the clamp, although he does concede that thicker bars, like those from Renthal and Hope, will only work with up to 10mm of rise. 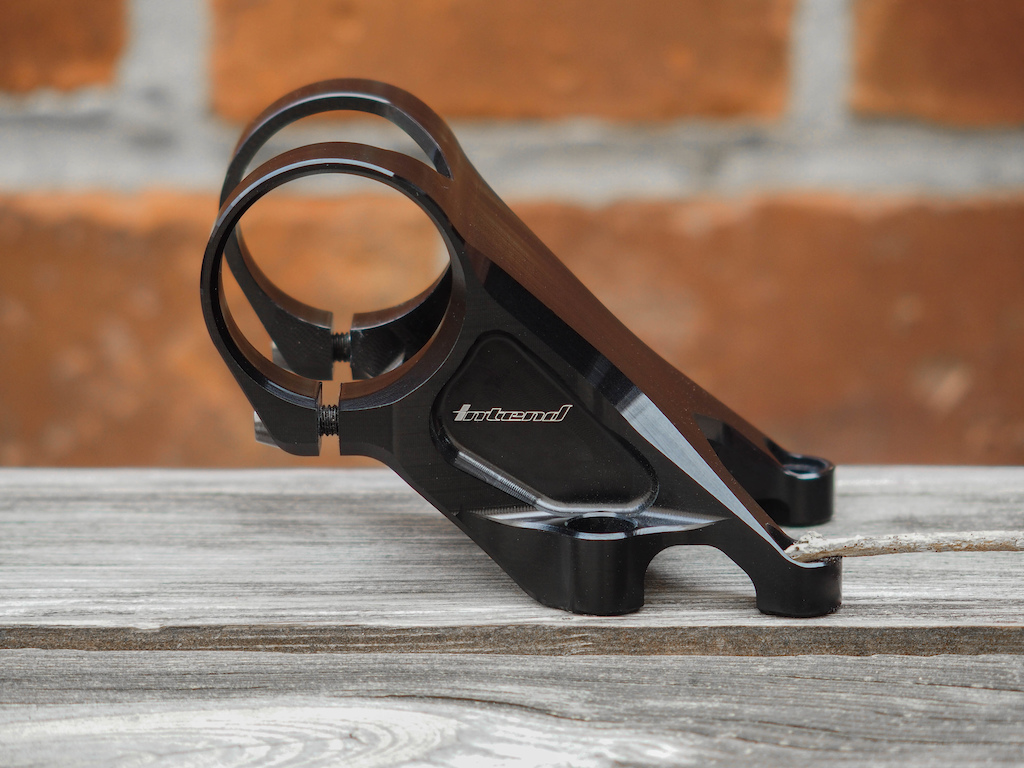 The DH stem's 60mm reach is intended to keep your bike's reach consistent, despite the 25mm height.

A non-removable faceplate saves some grams, as does only needing two bolts instead of four, and it also makes for a super clean appearance. Other details include a chamfer on the edge of the handlebar clamp so that it plays nice with carbon fiber, and fancy grade-5 titanium bolts all around. There are six different versions, including a direct-mount DH stem with an odd-sounding 60mm length that's designed to compensate for the added rise. Oh, and it weighs just 113-grams. 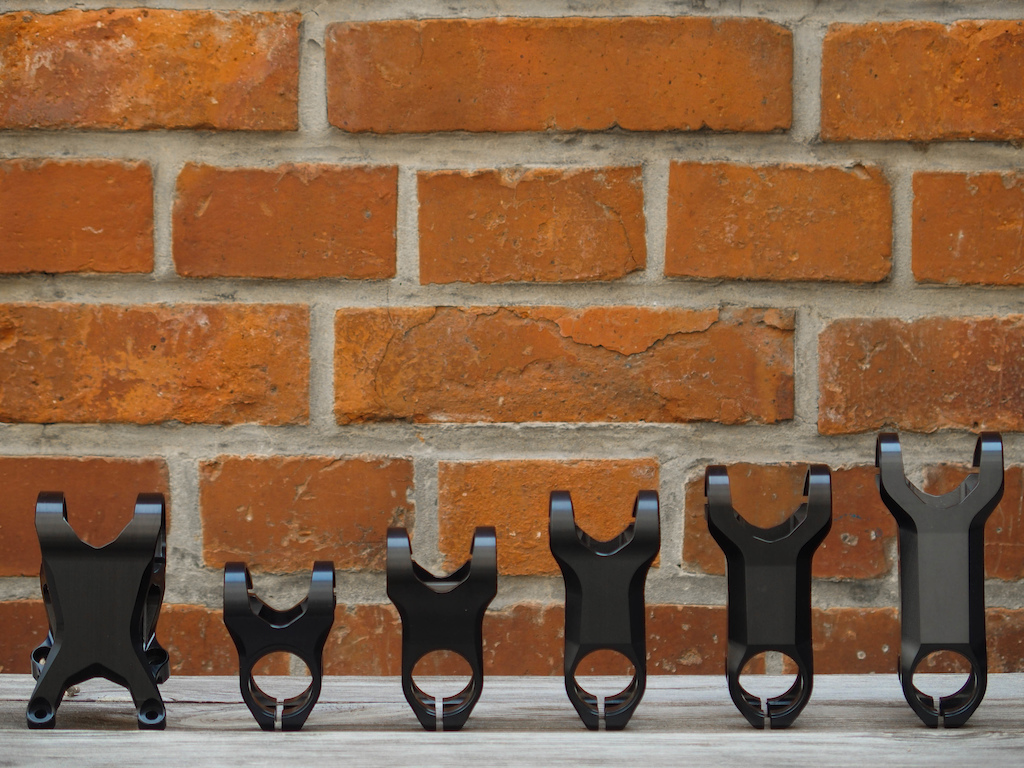 Weights start as low as just 79-grams for the 77mm long XC stem with a 31.8mm clamp, while the 35mm FR and 50mm EN versions come in at a hardly believable 80-grams and 88-grams. The stems are manufactured in Germany, as is their titanium hardware, and prices go from €149 to €189. Color options include blue, raw, and black.

jaame (Apr 8, 2020 at 12:37)
@fartymarty: I'm 40 and I would do one, even though I remember when the Club Roost "Downhill bars" came out and we had to remove the stem bolts and use a big screwdriver to lever the bar clamp open enough to get them through. My mate had some deep matt blue Azonic World Force Riser bars and he scratched the shit out of them on the first day!

Now I use a 15mm rise bar, I would be all over this stem.

dglass (Apr 8, 2020 at 13:17)
@faul: Yes but you'll still be taking of a set of brakes, shifter, and dropper. Depending on which type of controls you have you may have to take off grips as well. Just sayin'.

jdubs (Apr 8, 2020 at 13:24)
I'm over 40, been riding since 1990, and I love my 77Designz one-piece stem. Set it and forget it. Besides, with lock-on grips, taking off a lever and grip is hardly worth not getting a cool stem over. Nothing like it was with foam grips, aquanet, and lever clamp bands with an internal screw.

JMIT (Apr 8, 2020 at 20:29)
@ryan83: I have travelled a fair bit with my bike (good ol' days when we were allowed outside) and to get my bike in my EVOC bag I take the bars off the stem rather than the stem off the steerer. So this design is a no-go for me.

sspiff (Apr 8, 2020 at 23:05)
@JMIT: I do the opposite. I find getting the bars aligned with the steerer is easier than getting spot-on rotation in the stem, which often requires riding real trail to get dialed (for me at least).

jaame (Apr 9, 2020 at 0:09)
@sspiff: yeah I hate taking the bars off the stem. Four bolts to balance against the weird cable twist. I always end up touching grease by accident and saying f*ck.

onemind123 (Apr 8, 2020 at 12:16)
"There are components on your bike that, as long as they're strong enough and in the ballpark when it comes to weight, have essentially no effect on how your bike performs. "

mitcht (Apr 8, 2020 at 12:35)
For most people, it should read “there are bikes out there that have essentially no effect on how the rider performs”.

downcountry (Apr 9, 2020 at 15:05)
@iduckett: Agreed - at least someone provides reasonable information about their products.

MatthewCarpenter (Apr 9, 2020 at 7:40)
@mitcht: I thought I knew a bit of English and probably urbandictionary could save me but nope. So help me out: What is it that makes these type of comments pop up every time Cornelius Kapfinger is mentioned here of pb. What could "kap" or "kapfinger" stand for?

MonsterTruck (Apr 9, 2020 at 10:50)
@MatthewCarpenter:it means that (possibly) some PB commenters have been inside too long.

GET ON MY LEVEL

WheelNut (Apr 9, 2020 at 9:46)
The Intend is the same weight as the Enve, but cheaper. It is 100g lighter than the heinous looking Chromag BZA 35 stem but only slightly more expensive. The Intend is the only good looking 35mm MTB stem I know of at this time.

hamncheez (Apr 9, 2020 at 12:09)
@WheelNut: ? Enve is 28 grams lighter. That is an incredible weight difference. What self respecting Fidelity Investments middle manager would dare show up at the trailhead with an unnecessary 28 grams anchoring down their bike? It gives me anxiety just thinking about it. Its important to make sure your fellow riders in your club group know that you care more about your bike than your 2nd wife.

Tmackstab (Apr 8, 2020 at 21:52)
Ok everyone lets all relax. This style of stem is totally strong and reliable. We Are One makes a stem this style in collab with 77 Designs with a sleeved carbon bar. The benefits of this style are that the sleeve distributes the clamping load across a larger area decreasing 'pinch points' like a regular face plate stem which require higher torque from the stem bolts, Also some carbon bars can feel harsher due the 35mm diameter. With a sleeve, the bar can be narrower with more compliance and still be stronger while being able to fit into the stem without a spatula. Check out We Are Ones Instagram page to see real world tests. Intend, 77 Designs and WR1 have it figured out IMO.

Blawrence (Apr 8, 2020 at 12:46)
Around 2014 there was a run of Race Face Turbine stems that were recalled because the face plate was cracking/splitting. I owned one of those stems, wasn't aware of the recall, and it cracked on me during a small rocky technical descent. I was lucky I noticed the loud "ping" sound as it cracked and split and I stopped right away. I will never buy a stem with a face plate that thin again. I'll take the small weight penalty for peace of mind.

bman33 (Apr 8, 2020 at 13:47)
My thoughts exactly. I can only see this really being for the XC /gram counting crowd. Looks great, but most likely super flexy on more aggressive applications and the two bots only...just no.

VonFalkenhausen (Apr 9, 2020 at 7:00)
Call me crazy but less bolts is better if you can do the same job, and I think wrapping around the bar instead of squeezing it between two plates is a better way to secure it, assuming you can get it through in the first place. Which it seems is not a problem for many bars.

Upduro (Apr 8, 2020 at 13:44)
Had one of these for a while now, looks absolutely beautiful. Not something I would usually buy at that price tag, but hey, what mountainbiker spends his money on reasonable things?

Is it stiff (it does not look like)?
Can you put 35 raisers?
Did it break yet?

Upduro (Apr 9, 2020 at 0:49)
@RedRedRe: no one asked me for a detailed review. Honestly, I probably couldn’t tell a minimal difference in stiffness, but I’ve had zero creaking problems or any noticeable flex compared the massive blocky stem my bike came with.

It did not break yet, but I’ve only ridden it on my home trails since none of the bike parks are open. Considering it was tested at the EFBE labs here in Germany I doubt it will break. There’s some background on the engineering here: www.intend-bc.com/tech/stem

over-x (Apr 9, 2020 at 10:39)
Ludicrious expensive. Even shipping is expensive. A headache to swap handlebars. Got rid of mine and bought one for a third of the price and a few grams extra. If you are into it, look for the 77Designs for half the cost.

Someoldfart (Apr 8, 2020 at 12:39)
That’s way too skeletal for my liking. I’ve had issues with stems keeping my headset in adjustment because there wasn’t enough material and the bolts were too dinky to torque up enough to hold in place.

Shredtheduck (Apr 8, 2020 at 22:26)
Still rocking my bronze 35mm Straitline stem from 2010. Had it on 8 bikes , changed face plate once after a crash which they charged me about 8 dollars for. It's still as nice as any stem I've seen since.

hamncheez (Apr 8, 2020 at 12:46)
so with those looking for severe weight savings, I think the Scoot/syncros integrated design is going to be more successful.

Ttimer (Apr 8, 2020 at 13:17)
Big drawback of the synchros option is the inability to change bar roll. And you need a new combo if you want to change stem length, bar rise or width.
I’m not even sure the Hixon is any lighter than the Intend/Beast stem/bar combination.

Anyways, since when does "how well a bike handles" matter in the weight weeny game???

RedRedRe (Apr 8, 2020 at 19:18)
So all the hype about this stuff is because some german magazine and forums were excited about pushing a compatriot product?

All the stems I have seen with dual clamp design are not on the market anymore... because they cracked, right at the top.
From the pictures, these do not even look machined to high precision.

saulHT (Apr 9, 2020 at 4:57)
this stem has been around for 2 years or so since the preorder. Its only been updated in lenghts and diameter as far as I know.
The fastest and most hard charging rider in my region who seriously brakes a lot of stuff hasn´t had any issues with this stem for 2 years

So these hard chargers spent $200 for stem? lol