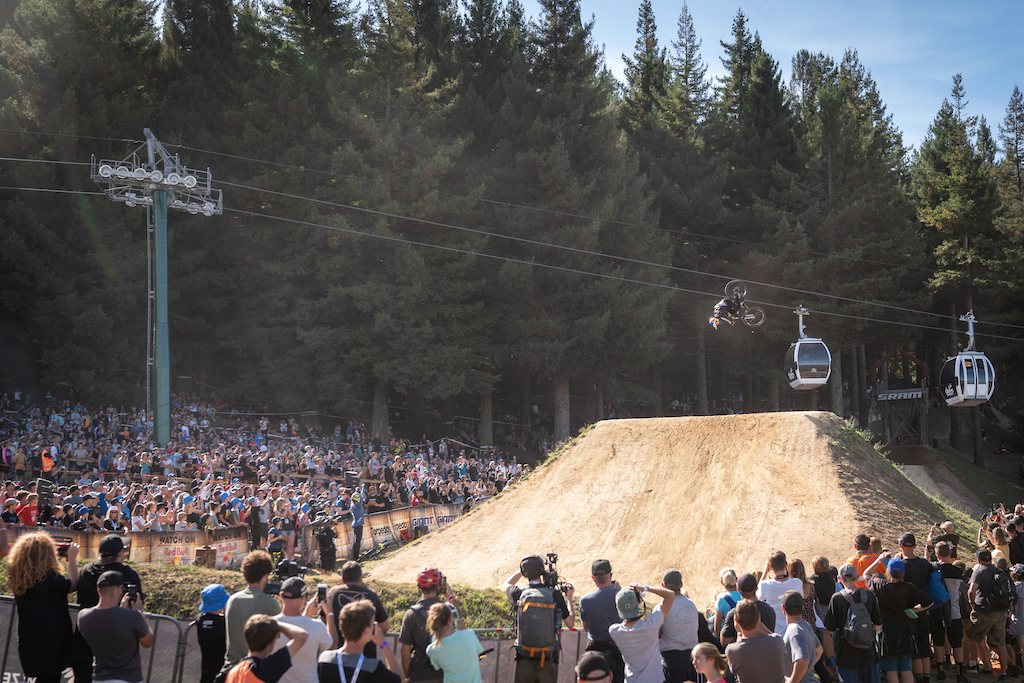 19 months after it last wrapped, and six months after it was originally scheduled to run, the wait is almost over. Crankworx is set to make its return to its Southern Hemisphere home in Rotorua, November 1-7, 2021. 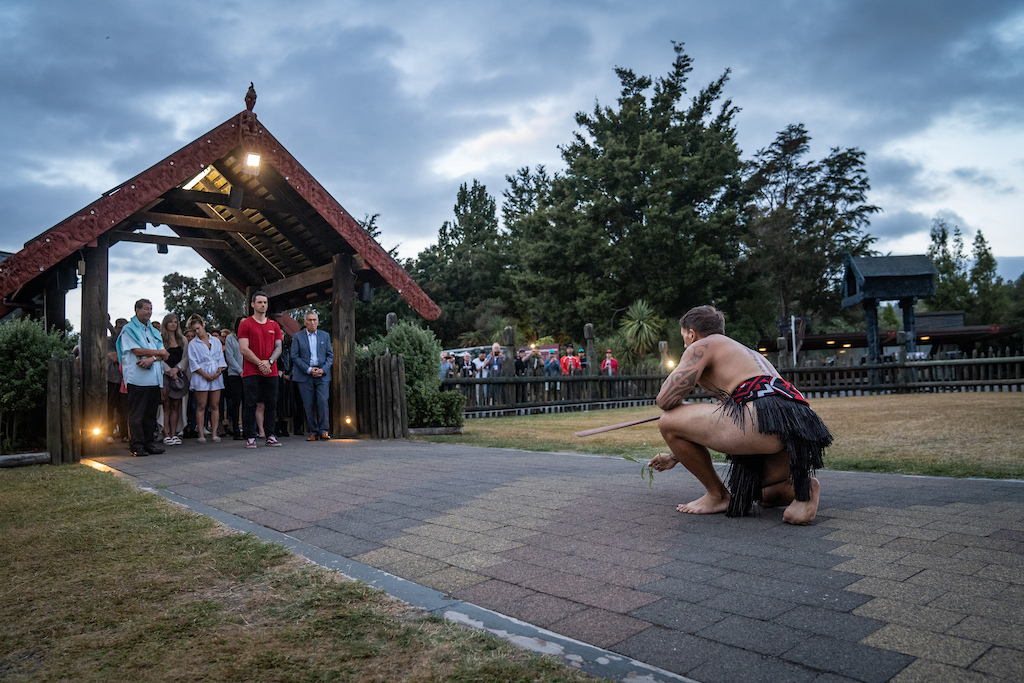 Welcoming the Kings and Queens of the sport to New Zealand in 2020. Photo: Kike Abelleira

We can't wait to see what that means...

Here’s a taste of some of the other athletes on deck to wrap their competition season in NZ: 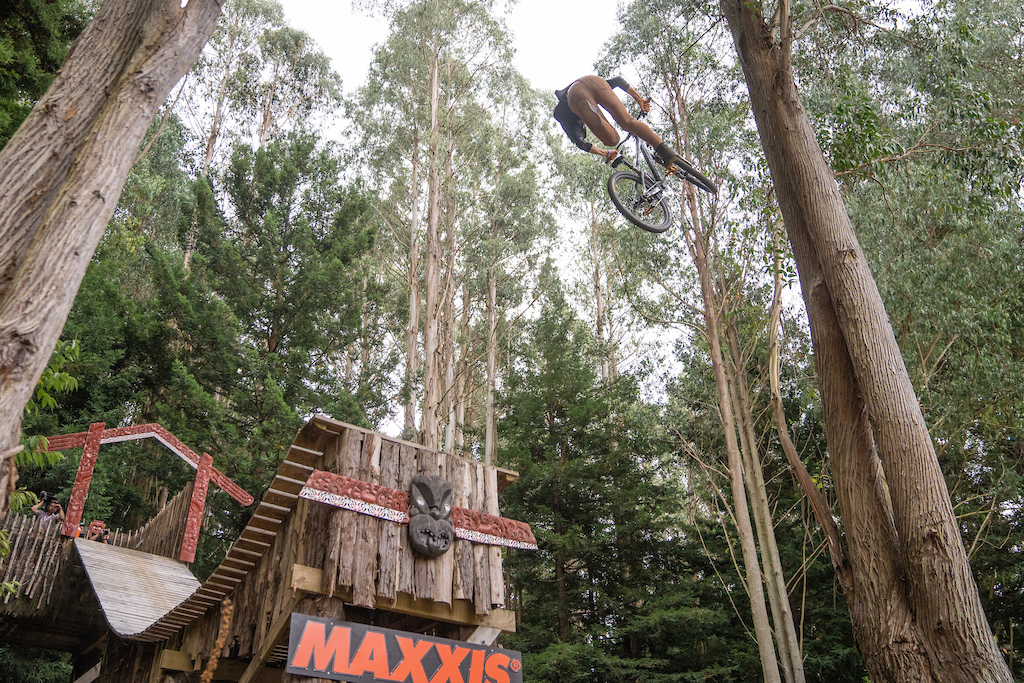 Overall, the festival will include Pro, Amateur and CWNEXT racing, Kidsworx competitions, and a ticketed venue bringing together the best of MTB for New Zealanders.

As Crankworx was included on a list of Government-approved events, a small number of athletes and key personnel deemed critical to the event have been granted entry to the country by Immigration NZ.

With the border still closed to recreational travel, Crankworx Rotorua 2021 will provide a unique opportunity for Kiwi fans to get front-row seats to watch the world’s best face off against their local heroes. Those in New Zealand keen to get amongst the action can grab their festival passes today: crankworx.com/rotorua/passes/ 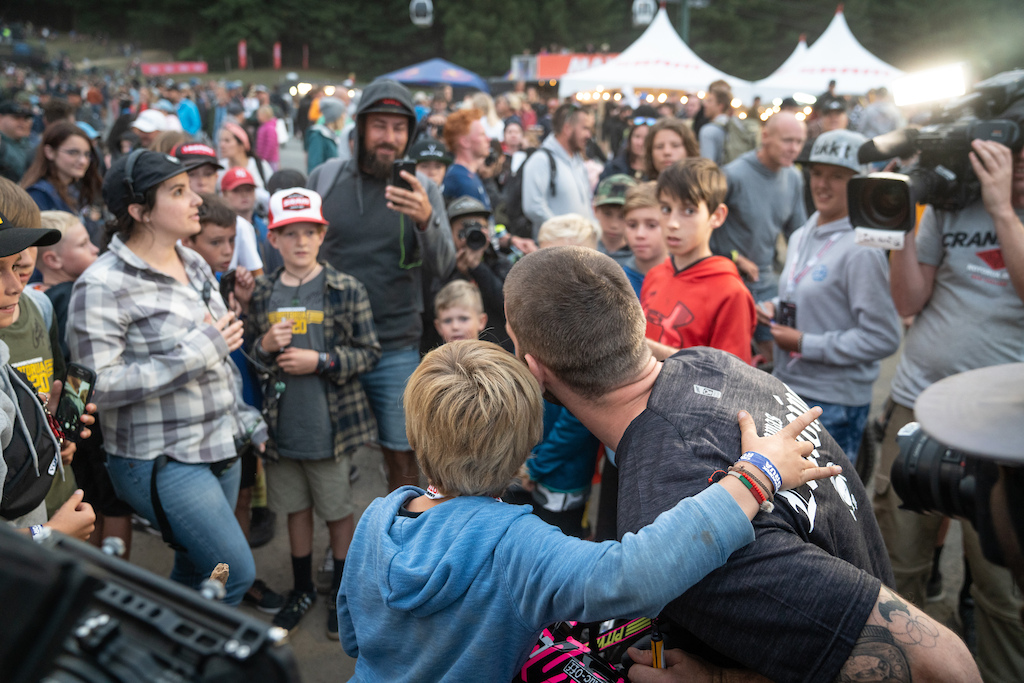 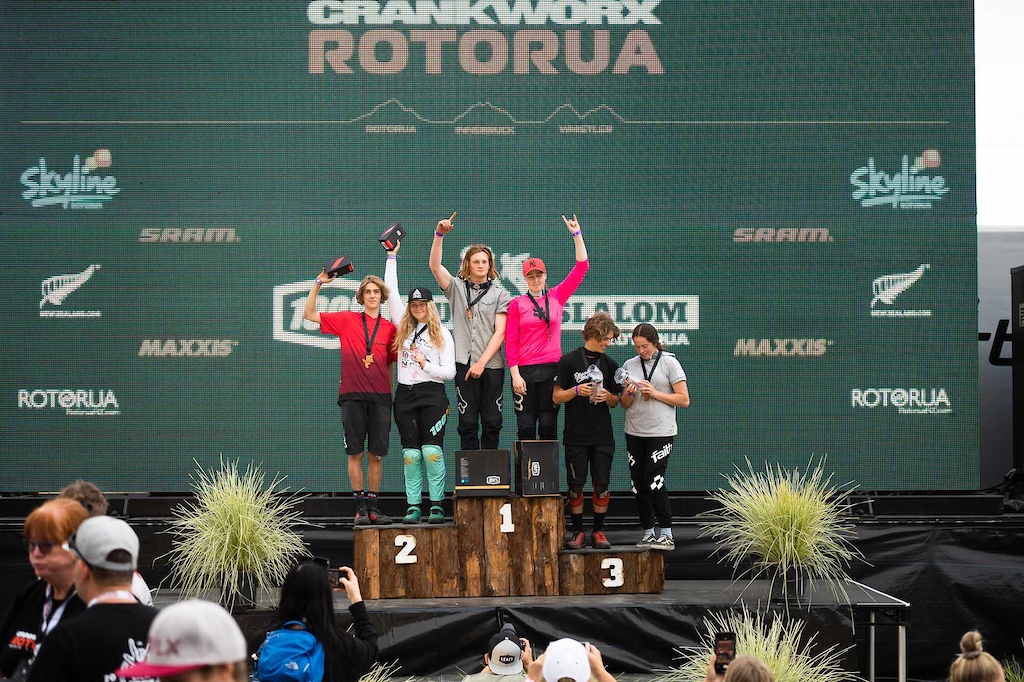 Kiwi fans stoked to meet Tomas Lemoine and CWNEXT racers atop the podium in 2020, the first year the category ran in Rotorua. Photos: Kike Abelleira and Jay French
Registration for all Pro, Amateur and CWNEXT events at Crankworx Rotorua is now open, running through October 27 at 11:59 p.m. NZDT. Details: crankworx.com/athletes/locations/rotorua/info/

In addition, as the final event of the Crankworx World Tour season, Rotorua will be where the season’s overall King and Queen of Crankworx will be crowned.

With that, we're stoked to share an additional piece of news was released today. Going forward, Crankworx Rotorua will shift permanently to the final stop of the Crankworx World Tour, closing out mountain bike competition season. 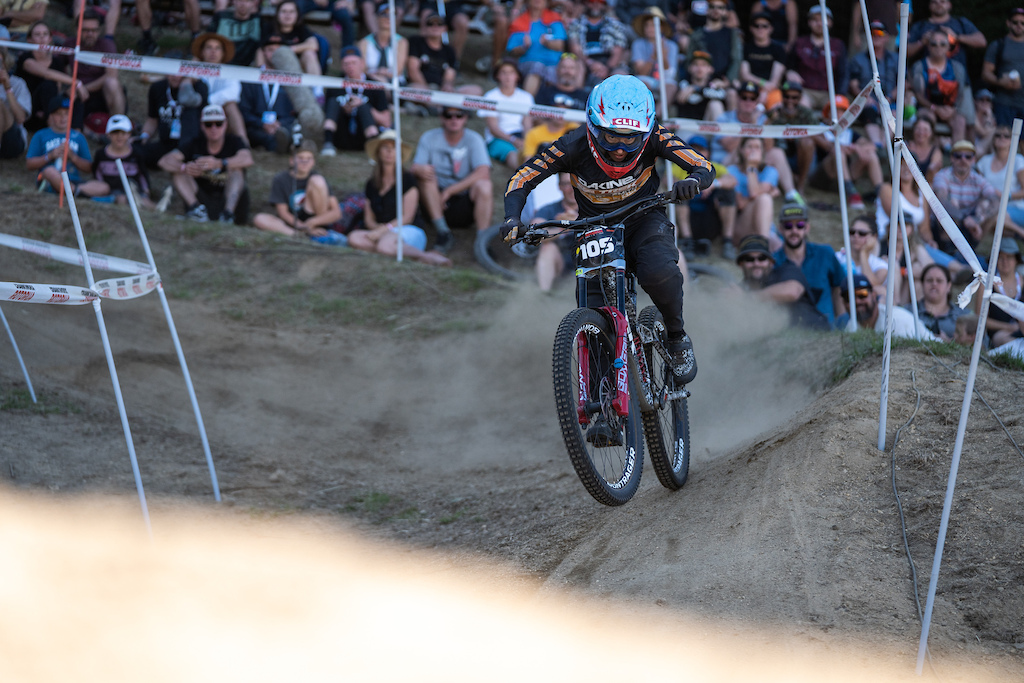 Get all the details of the 2021 Crankworx World Tour, with updates to come about both Crankworx B.C. (September 22-October 2) and Crankworx Rotorua (November 1-7): crankworx.com

anchoricex (Aug 31, 2021 at 14:21)
So I take it brett is done with slope ? Which I have no beef with it seems like he's pushing into other endeavors. I just hope he's got enough things in place to sustain an income indefinitely, he seems like a really nice guy and just want nothing more than to see the guy remain successful.

Emil has a friend who's doing backflip windshield wipers, curious when we see him on the scene. He was at audi 9's, Lukas Skiold. Potentially a more disruptive trick bag than Emil's, but of course sending a few single jump lines is a different animal than linking everything together on an entire slope course.

aer0 (Aug 31, 2021 at 14:33)
How many of these athletes will get MIQ spots? our own riders are returning from events overseas plus this additional load of visiting internationals. Dont get me wrong im stoked to have the event happen at all that im just curious.

"Documents obtained by RNZ show overseas participants in a mountain bike festival are the latest group to get the nod for government-mandated spots in managed isolation, with the government asked to approve 70 foreign athletes and staff attending November's Crankworx event in Rotorua"

Other slots of note were 60 for Winter games and 400 for Antarctica.

officialcrankworx (Aug 31, 2021 at 14:46)
Such times, hey?? We've been working directly with Immigration NZ on this for well over a year. It's meant working through the process in place to ensure those essential to the event can enter the country and have spaces in MIQ.

skengman (Aug 31, 2021 at 19:00)
In my opinion it kinda sucks that these events are taking up MIQ spots. People can't get MIQ allocations to return home to see loved ones before they pass away, have kids, or get married but foreign athletes can come for a one off event that most New Zealanders don't care about...

wishicouldridelikekade (Aug 31, 2021 at 19:01)
So great to hear that Crankworx will be run with a full complement of internationals but it does ask the question as to how these decisions are made when businesses are struggling to get skilled workers/professionals into the country. I wonder if this makes the font page of the papers whether the pin will get pulled.

dirtologist (Aug 31, 2021 at 19:04)
@skengman: as much as I like Crankworx/MTB, I couldn't agree more. Just another proof of how sports is over-valued in this country.

juanmenendez (Aug 31, 2021 at 21:12)
@tealdub: for clarification on the Winter Games spots. Winter Games were allocated spots but but gave them back because they didn’t feel it was correct to take up spots for a sporting event. Especially with the current NZ athletes not being able to get spots. E.g. Michael Venus, Braden Currie.

notsofastoverfifty (Aug 31, 2021 at 22:33)
@officialcrankworx: , Good luck. But getting the MIQ slots is just one small step. With the Delta case numbers rising in Auckland & Northland right next to the Bay of Plenty, you don't have to be a complete pessimist to wonder if your event is going to end up getting cancelled unfortunately.

notsofastoverfifty (Aug 31, 2021 at 22:35)
@dirtologist: not disagreeing with you per se, but sport is business really. And possibly, relatively easy GDP to generate?

dirtologist (Sep 1, 2021 at 1:11)
@notsofastoverfifty: like the whole America's Cup showed, I have a suspicion that this claim is over-blown, and that such events never bring back anywhere as much coin as what they claim. I might be bitter and old, the latter is certainly true!

mbikes1 (Sep 1, 2021 at 1:58)
@juanmenendez: you sure on that? Surely they gave the spots back because lockdown cancelled the event?

juanmenendez (Sep 1, 2021 at 3:31)
@mbikes1:
Obsidian was run last year with no spectators present. (Albeit with just nz competitors) Just like Crankworks will be if run at level 3. ( but using MIQ spots in the process)
Winter Games had issues with athletes not wanting to MIQ for 2 weeks even when vaccinated mid season which is understandable. Crankworks should be giving these spots up to nzers that are here for an actual reason not bounce around on dirt. I love crankworks but public health and people first eh.

integralnz (Sep 1, 2021 at 16:01)
@officialcrankworx: Do NZ a favour and postpone your event to 2022. With the current outbreak it is highly unlikely to go ahead. NZ need all of its quarantine beds to deal with the outbreak and also to get Kiwi's back to NZ. It would be extremely tone deaf to proceed with running this event

multialxndr (Sep 1, 2021 at 23:09)
@skengman: as much as it isn’t always nice to hear, the government is always making financial trade-offs they do it between putting in median barriers on roads and funding an arts festival, they do it between between a the economic benefit and enjoyment people getting to experience a mountain bike festival and taking up spaces in MIQ. It does suck if you miss out on a spot but it is just a reality and this os a pretty minor example.

JoshM00 (Sep 1, 2021 at 0:36)
Good boost for Rotorua, better not get cancelled this time! Good to see Brett Rheeder giving others a chance to win in the slopestyle

45Sox (Aug 31, 2021 at 14:08)
Oh, how exciting, I love this Fantasy World Crankworx has created where NZ isn’t in full lockdown and you dont need to spend 2 weeks in quarantine if you are lucky enough to get a spot/visa into the country..

McArdle (Sep 1, 2021 at 2:55)
@kylebirkenfeld22: or maybe he feels he can’t go any further? Semenuk did the same and only produces edits now and then (from what we see anyway, oh and apart from being a sick rally driver) and people thought the same when he left the comps behind.

ClintTrahan (Aug 31, 2021 at 14:03)
Stoked to see this wrap the MTB series and keep summer going just a little longer! It’ll add a great wrinkle to the format we’ve all grown to expect! Bring on Rotorua. Bring on 2022!!

OldButBold (Sep 1, 2021 at 13:44)
Seems weird reading this after the Nelson EWS cancellation, and that was scheduled for April next year??!
Post a Comment