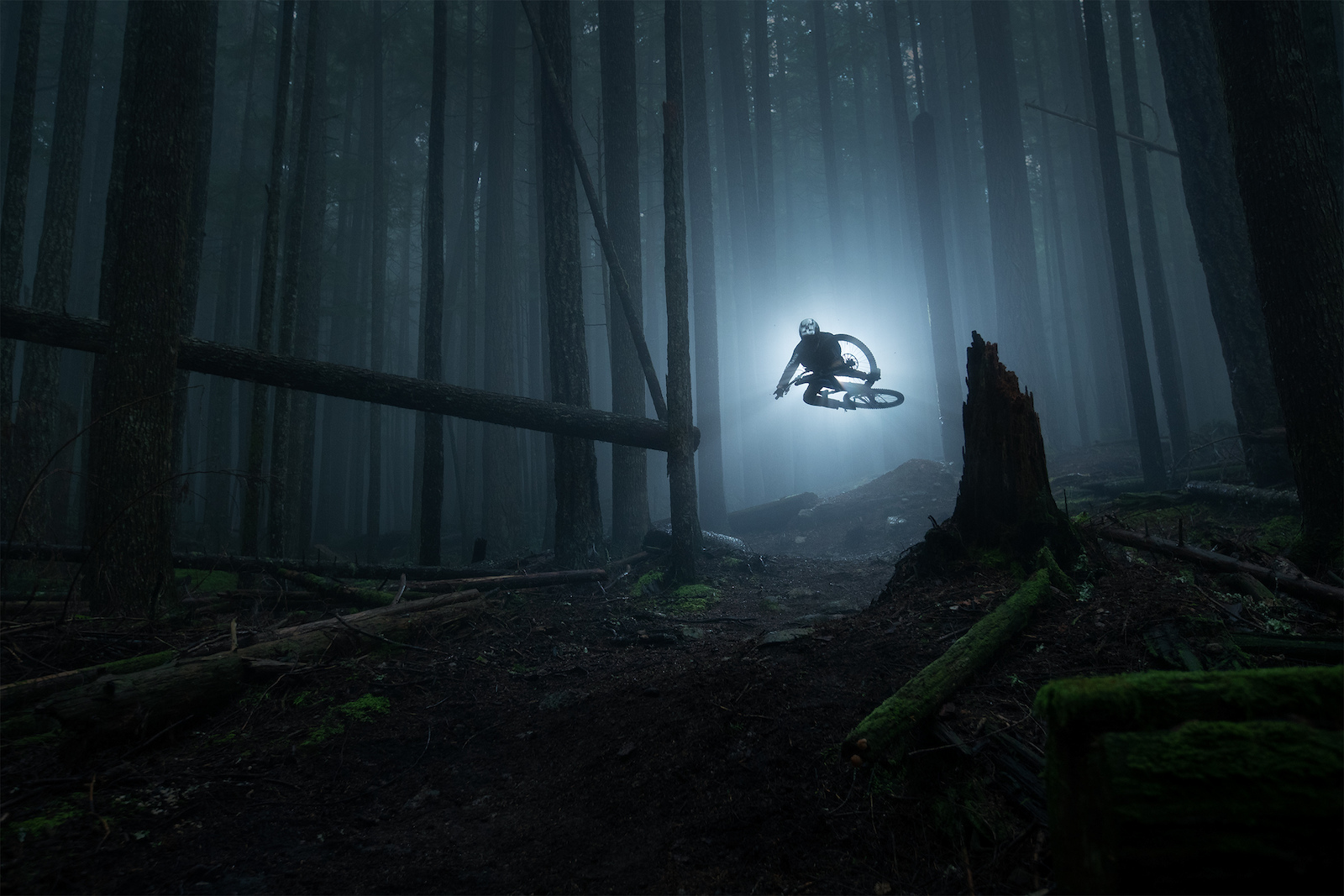 JB Liautard's winning photo was pitted against some fierce competition throughout the 2019 Pinkbike Photo of the Year contest, including Ross Bell's impressive photo of a rider manualling through a puddle that transposes you to your last rainy ride, Toby Cowley's image of a stylish Brendan Howey amongst the fog and trees and Manuel Sulzer's shot of two people riding along a cliff in front of massive jagged Dolomite mountains. After a frantic couple days of voting during the final round, JB Liautard's dramatically lit shot of Hugo Frixtalon on the Sunshine Coast of British Columbia was the one to take the competition.

We caught up with JB Liautard to learn more about his winning photo.

I wasn’t confident at all, to be honest. I had two shots in mind for this contest and the one I expected the most didn’t make the cut. I wasn’t sure that the style of this winning photo would match the competition but in the end, it’s a great surprise.

I’ve been following this contest for five years now and every year I’m surprised by the result of many rounds. But it just means photography is a really subjective topic, and it’s good to sometimes let everyone give their opinion because in the end, the people seeing your images aren’t just world-class photo editors or photographers. This open voting system might be rough and feel unfair from time to time, but it helps to keep you humble and to develop a critical mind about our own work.

I took this photo on the Canadian Sunshine Coast, near Sechelt, BC. I was on an assignment for Commencal bikes as they were releasing their latest Freeride bike, the new Furious. Léon Perrin was shooting a video part with Hugo Frixtalon and I was taking photos on the side. We usually work together for this kind of project.

I would say a bit of both. It was spontaneous because I had no idea I was going to shoot this exact photo, but I already had the general idea in mind as I use a lot this kind of backlighting. I have a long list of concepts and ideas written on my phone. It’s sometimes just a general thing, or really precise lighting and framing, and whenever the conditions are reunited, I know what I need to do pretty quickly. It just helps me think faster when I’m on location.

When we woke up that morning, we saw that the clouds were really low and it would potentially be foggy, so we decided to go up to that trail and started to shoot it from top to bottom. Luckily, the fog stayed in the woods for the whole day, which allowed us to work properly. When we reached this part of the trail and I saw what Hugo could do off this jump, I started to look for a way to make it look good. I took some photos of this jump without any flashes, and while roaming around, I found a big stump a few meters down the trail. So I asked Hugo and Léon if we could focus on this special photo for a couple minutes. I always carry speedlight flashes with me in these kinds of conditions so I just had to set it up and shoot.

There usually are some stories or fun facts going along with the photos I do, but for this one, I didn’t destroy anything, we didn’t even get wet and Hugo didn’t crash, so I’m not sure I can find anything interesting. There’s maybe one thing though. It might seem a bit weird, but I spent 5 minutes covering a big flat rock with dirt, as it was white and in the middle of the trail. It didn’t fit into my composition because it was a bright object in the foreground, distracting the viewer’s eye from the main subject. I also removed a couple of small white rocks for the same reason. It’s like Photoshop but in real life.

I don’t really remember, maybe five attempts. It’s a really technical image as the rider has to hide the flash with his body while in the air. As I was shooting with a flash, I couldn’t shoot burst mode, so I had only one chance for each run Hugo did. It’s kind of hard because you need to shoot at the right moment of the action, and the rider has to be perfectly aligned with your flash in the background. Each jump is different, sometimes he was going a bit higher or a bit more to the side, and that’s why it took a couple of tries. But Hugo did a great job at almost doing the exact same move a couple times!

I didn’t really know what to think to be honest. I had literally no idea who could win for each round. With my previous experiences in this competition, I learned to not care too much about the results and to step back, but in my opinion, the worst thing might be the comment section. There’s so much hate no matter the results and I think some photographers might feel bad because of this.

To come back to the main question, even if I was looking at the first rounds with not much confidence, the further my shot was going, the more I wanted to win. You know this feeling of "maybe there is a chance?"

I don’t have any plan yet, but I’ve been dreaming of a fishing/camping trip with my friends for a while now, so I might buy a plane ticket to BC one day or another.

First, thanks Pinkbike for organizing such a photo competition. Then I’d like to thanks all the riders I work with, and all the people supporting my work, from my clients to my friends and family. I also want to give a shout-out to the Commencal Team, I wouldn’t be here today without their support during the past 3 years. I’m really lucky to make a living out of my passion and I can’t wait to see what the future brings.

takeiteasyridehard (Feb 19, 2020 at 0:12)
Nice work. I like your perspective, no pun intended. Let the haters hate...they do it for themselves...even if they dont know it yet.

Rideuse67 (Feb 19, 2020 at 2:29)
"It's like photoshop but in real life"... I think this sums up how JB always manage to find us great compositions.
And that's also the difference between pro and amateur photographers.

Congrats JB, you've earned this one fair and square

PaulMurden (Feb 19, 2020 at 0:30)
Congratulatios dude I love this picture and did vote for it all the way through. It was real close between this one and the puddle manual which seemed to transport me somewhere. There was just something about this one though.

rrolly (Feb 19, 2020 at 6:55)
As soon as all the photos were posted I grabbed the ones I liked for future wallpapers. This is the one I set as my wallpaper right away. It's mountain biking-meets sci-fi. I love it.

gnaralized (Feb 19, 2020 at 1:19)
Very nice shot ! I was thinking that that was the settling sun beyond Hugo and you just used the flash to lit up the front face... I'm amazed by the simplicity of the setup given the strong visual efffect. Good to learn a new trick !

jeremiahwas (Feb 19, 2020 at 5:44)
“With my previous experiences in this competition, I learned to not care too much about the results and to step back, but in my opinion, the worst thing might be the comment section. There’s so much hate no matter the results and I think some photographers might feel bad because of this.”

TombPhoto (Feb 19, 2020 at 1:52)
So well deserved. One of the most distinctive styles in mtb photography at the moment and always killing it!

BradTrent (Feb 20, 2020 at 6:36)
As a professional photographer myself, I look at this image with awe. Everything about it is just bloody perfect and the backstory just makes me throw more respect to the photographer. Simply epic...BRAVO!!!

DanCaseyImages (Feb 21, 2020 at 18:24)
Such a nice shot, congrats JB and all the other contestants. This photo has such an awesome vibe to it, that I am sure all riders can appreciate, the long hours, late nights, cold temps where visibility is almost zero. Just back to basics of relying on last minute instincts to navigate through the forest.

valhallascott (Feb 19, 2020 at 0:35)
Well deserved. Amazing, well thought out photograph that checks all the boxes.

JbLiautard (Feb 20, 2020 at 0:11)
I almost never use highspeend sync, especially in dark conditions, in this case the surroundings would have been way too dark.

LaXcarp (Feb 19, 2020 at 6:11)
I feel duped! I legit thought it was the setting sun in the background...but it was fabricated. Still looks really cool though
Below threshold threads are hidden

ButtermilkBar (Feb 19, 2020 at 0:41)
Great shot, I like that it looks like a photo anybody could have taken with any cheap phone. Guys probably spent hours trying to get the perfect shot with special equipment and this person just choose the right time and place to take a casual shot of a stranger with their phone.

betsie (Feb 19, 2020 at 1:44)
" I like that it looks like a photo anybody could have taken with any cheap phone" on you go then!!!
This shot is so difficult to take and no phone, not even the latest Samsung would stand a chance.