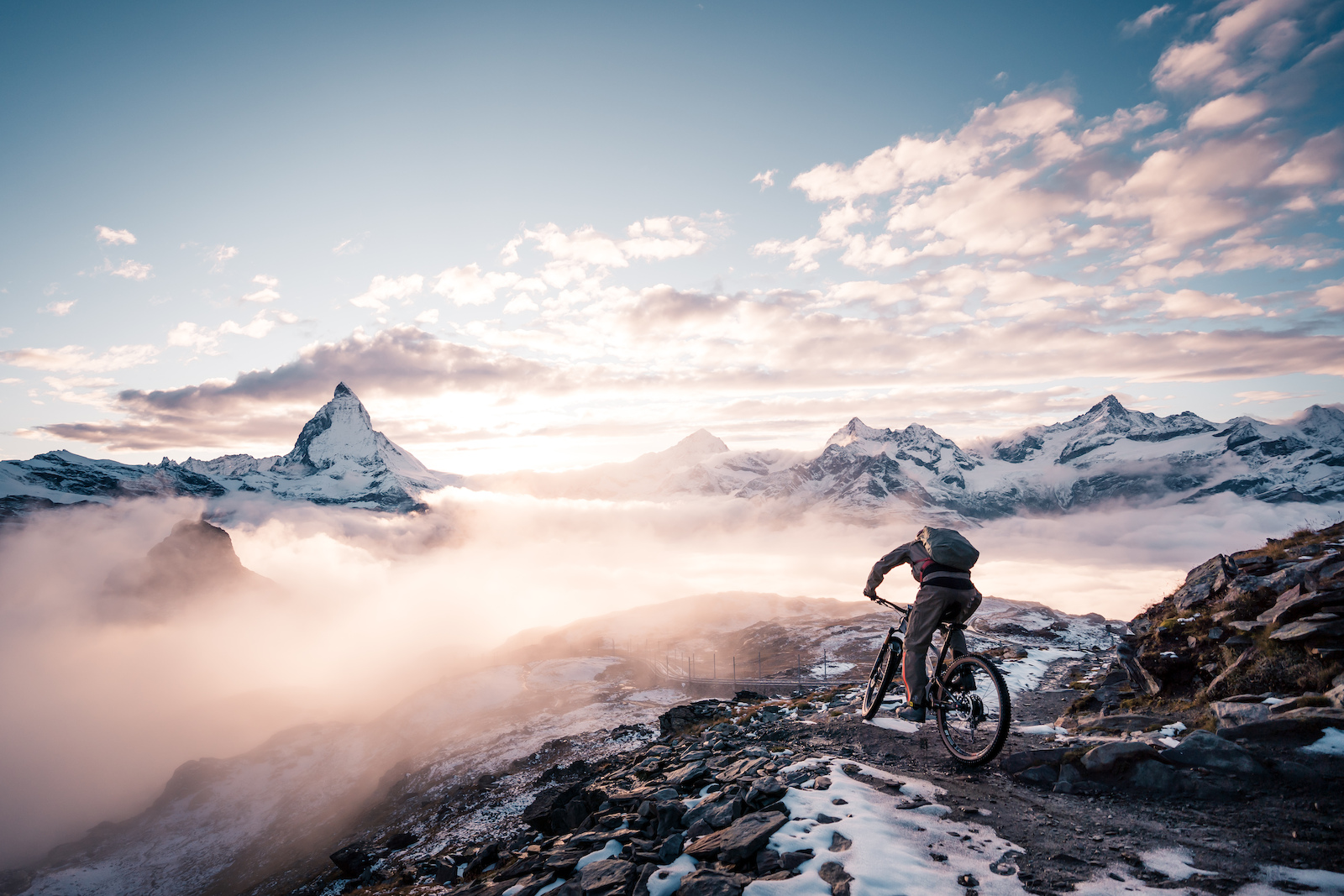 Jan Cadosch's winning photo was pitted against some fierce competition throughout the 2020 Pinkbike Photo of the Year contest, including Ross Bell's stunning shot of a rider styling into the frame in the greenest of landscapes, Trevor Lyden's dramatically lit shot of Cody Kelley blasting dirt and Mason Mashon's photo of Graham Agassiz riding down a loose chute. After a frantic couple days of voting during the final round, Jan Cadosch's stunning shot of a rider in front of the Matterhorn was the one to take the competition.

We caught up with Jan Cadosch to learn more about his winning photo.

I had no idea that my picture would make it this far. I’ve never seen such an amazing sunset and thought, well if you don’t enter you already lost. To see my picture in the top 32 was already a big achievement.

We were in Zermatt watching the Pros ripping through the EWS. It was wet, cold and foggy. After the race we decided to go up the mountain one more time, no matter what weather it was.In the train to Gornergrat we broke through the clouds and had this unique scenery with unexpected sunshine. Luckily, I had my camera in my backpack, and we started taking some pictures before the sun went down. This wasn’t for an assignment. It was pure joy for riding mountain bikes.

It was more than spontaneous. We didn’t expect to even have a lot of light left to ride down from 3000msl/10’000ft back to Zermatt. No matter how the trail or conditions are, bring your camera because you never know what could happen.

In Switzerland we don’t have many rock slabs to ride. But the top part of Gornergrat is exactly that, what makes it kinda special. Lots of rock and boulders you can ride with different lines. I really wanted to get the whole landscape in the shot but couldn’t find a good spot until this awkward corner. It’s not the best corner for riding but I could capture the emotions and energy what really makes this picture unique.

We got it at the second attempt. The clouds were moving fast, and we had little light left to shoot. And we needed to get down to Zermatt again, which was another 5000ft descent, so we didn’t want to stay too long. 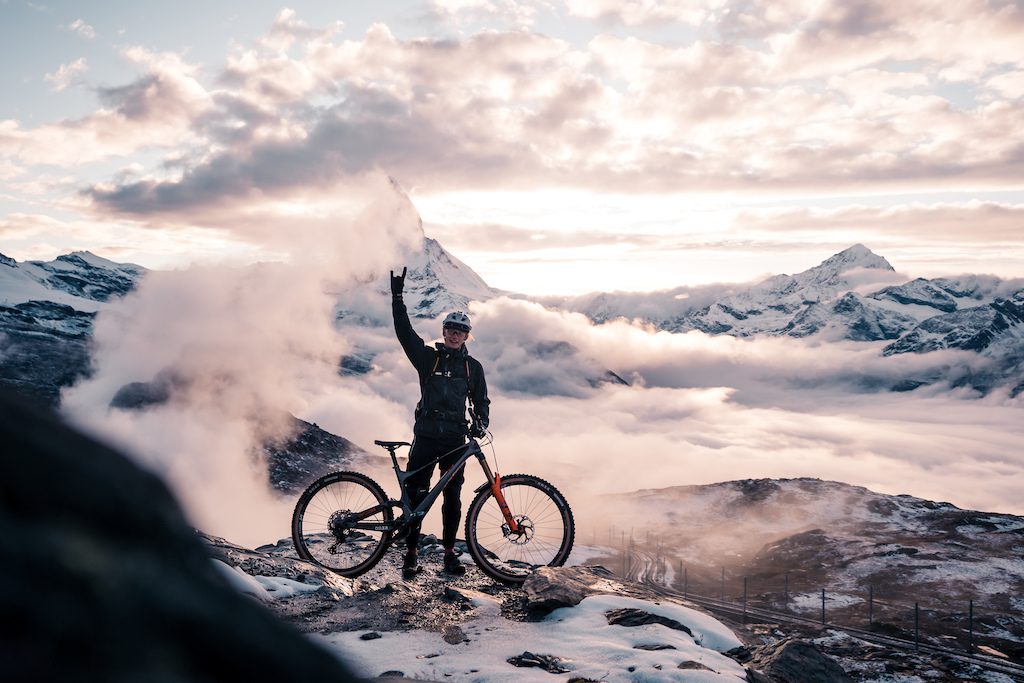 Jan Cadosch shared a couple more photos from that day with us. 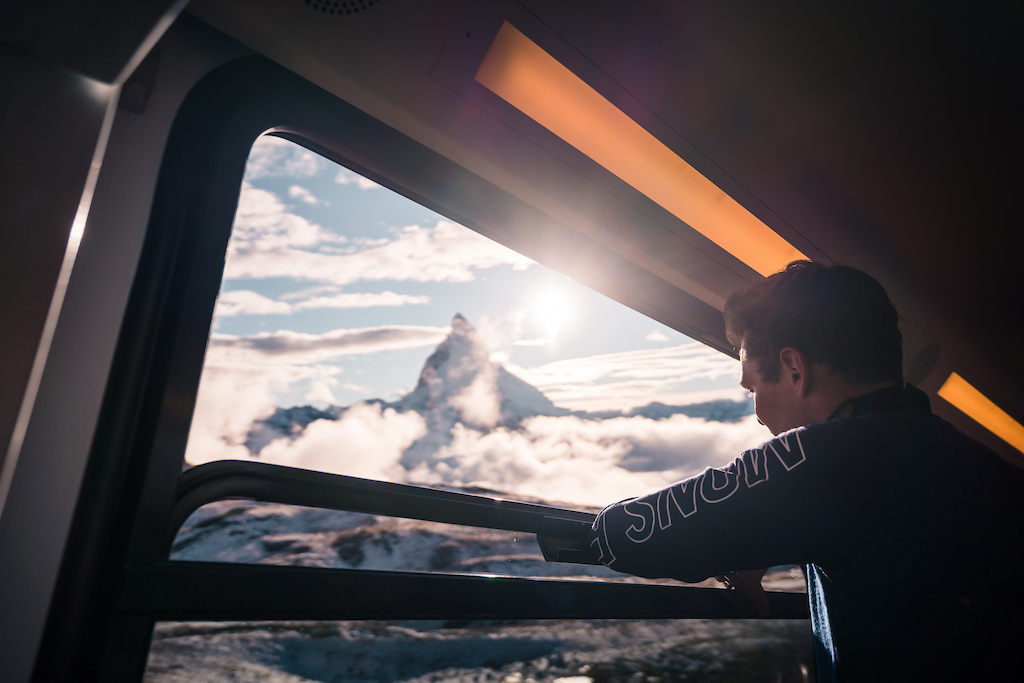 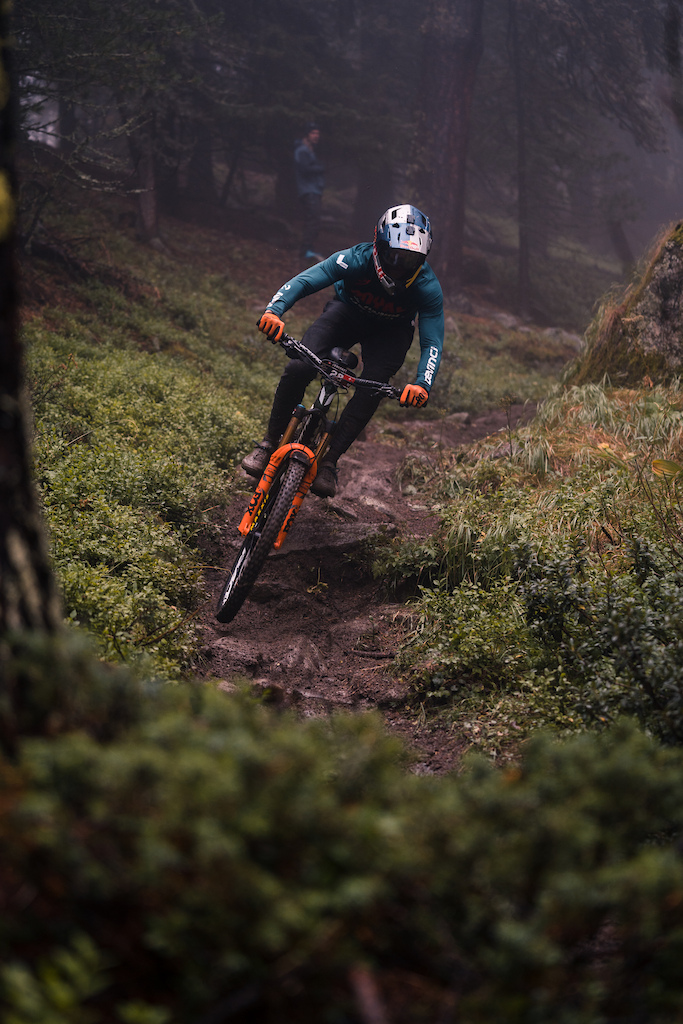 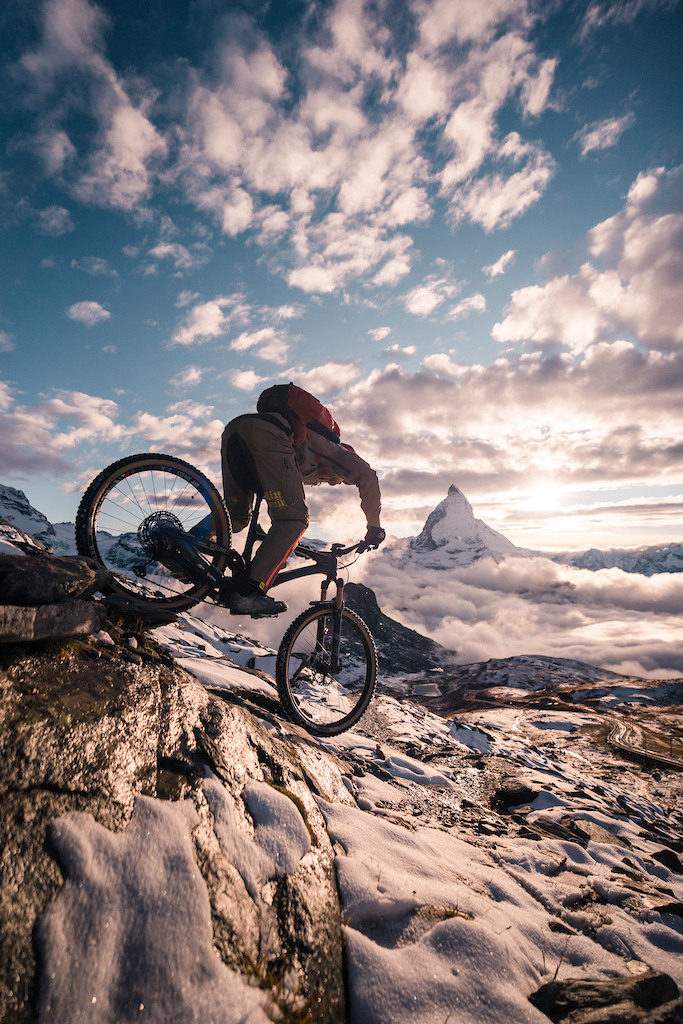 As mentioned, being in the top 32 got me already really hyped. After making it into round three I knew it would get really hard but figured it’s up to the Pinkbike community to decide. Didn’t expect to win against Ross. What a tight battle but after that I felt like we could actually win now.

For me Ross Bell and Trevor Lyden really catched me with the energy and power their picture transfers.

I will for sure upgrade some of my gear especially for filmmaking. Always dreaming about riding a bike in BC one day, let’s see if that happens in the next years.

I want to thank Pinkbike and Jenson USA for making this photo competition possible. It’s always inspiring to see so many good pictures. Thanks to all the people that support me and my work. Makes me push even harder to shoot more for clients and magazines.

UncleSpec (Mar 4, 2021 at 1:27)
It’s hard to win against Matterhorn, sure one of the most amazing places that I’ve ever been. Ride with train on Gornergrad is great with amazing views on glacier and beautifull nature. Memories....

noplacelikeloam (Mar 4, 2021 at 6:54)
Really, really nice work. Spontaneity shines through the staged shots. You captured an epic ride, one a lot of us dream about, not a dude sessioning a jump. And IMHO, thats why you won.

michi220573 (Mar 4, 2021 at 3:22)
And there's a lot more trails around Zermatt. I have been riding there for 10 years and will do so in 2021, too and I have never found any bad trail there. I voted for this photo all through the competition also because of Zermatt being some kind of second mtb home for me. Standing on top of Gornergrat and watching all the glaciers and mountains and having some of the best singletrack ever to ride were some of the best moments in my life at all.

I've wanted to bring my gear riding with buddies more than once to try to get some "action" shots. But I'm low key worried that if I do crash, I won't just be crashing, but smashing up my gear (D750 + a few primes). Or more accurately, I don't want to decenter a lens from a hard knock.

How has your gear held up while riding? How do you carry it? Am I worrying about an non issue?

Congrats on the photo of the year

denzilheeger (Mar 4, 2021 at 17:02)
Ill jump in here. My main riding pack is a Shimoda X50. Pretty heavy duty pack made specific for adventure photography work and is what the majority of the World Cup guys are running with. Had a crash that cracked my frame and i went for a big tumble and all my gear held up fine in that. Otherwise for a smaller setup I have an EVOC HipPack Capture that works well as well.

generationfourth (Mar 4, 2021 at 17:43)
I think this is what made me go "hmmm" as well. From the article he made it sound like he takes his camera and still rides fairly aggressively if there is no photo op. If it where me I'd probably be on my hardtail, walking tech sections, and generally committing to it being a photo mission not a ride. Wondering how other photographers approach it.

I like using OPTech camera and lens pouches. Also, I'd much rather take my gear at the risk of breaking it then have it sitting on the shelf gathering dust...

jcadosch (Mar 4, 2021 at 23:06)
I'm mostly riding with my EVOC FR Trail Blackline 20. If it's just a ride with friends I limit myself to one lense (mostly 16-35 or 70-200) to save some weight and get more creative with what I got for the day. I put the camera in a sweater for some more protection and have something extra to wear if it's cold.
As soon as I ride I don't think about the camera anymore. I'm not going for the KOM but you can still ride decent. In the end a camera is just a tool.

If hes at f2.8 how is the landscape in focus too? Wouldnt focusing on the rider create bokeh or would using a wide lens help with that?

jcadosch (Mar 5, 2021 at 2:42)
@stevesmith-ss: I still focused on the rider. You create most of the bokeh with the compression of the background in relation to the subject. If the rider is not right in front of the camera with the wide angle lense there is less compression and less bokeh. This way I can shoot at f2.8 to get more light into the camera and the moutains are still quite sharp.

jcadosch (Mar 8, 2021 at 4:59)
@generationfourth: You couldn't get this shot but for sure something else that's really nice. The light and scene is what make it special and you can work with that. Was for sure happy I got the 16-35 in my bag that evening haha

generationfourth (Mar 8, 2021 at 11:09)
@jcadosch: I agree lighting is everything and you would've still captured a banger. Even though gear isn't everything I'm really inspired by your photo and it make me really want that 16-36mm equivalent... I'm missing UWA in my kit. Either way I'm inspired to take my 'real' camera on rides with one lens- I like your strategy.

I am glad that your photo won because to me it is more of a landscape photo with the mountain biker being the cherry on top. I shoot a lot of rock climbing and in a similar manner and I found that style to not get as much attention as pure action photos- they simply don't "perform" well on instagram, or even onscreen and not as easily consumed. Nice work!

Lornholio (Mar 4, 2021 at 9:21)
This shot was pretty "meh" for me from the start but seeing it full-screen here and effectively cropped to about 16:9 improves it dramatically to my eye.

Congratulations on winning the vote regardless. Spend the money on Zermatt lift tickets.

generationfourth (Mar 8, 2021 at 11:11)
I just made another comment on this but you are spot on. Images like this which are more 'landscape', but have a lot of dimension (the rider in the corner) do not perform well on instagram or smaller screens. I bet a print of this would be absolutely amazing.

KoenR (Mar 4, 2021 at 3:03)
Agreed - the top & midsection coming down Gornergrat "Classic" route is the best natural trail I've ever ridden!

mikeyb76 (Mar 4, 2021 at 17:33)
Beautiful shot!!! I saw some people were talking shit about it on IG, but those negative people can suck it!!! This shot is more spontaneous and not so “produced”, and mountain biking has always about getting out doors and exploring, not about how sick you look in your TLD gear.

Altheena (Mar 4, 2021 at 9:51)
Congratulations on the win this was my favorite photo from the first time a saw it.

markcorrigan (Mar 4, 2021 at 13:44)
Surprised we haven't seen Cathrovision nailing the rider on his poor line choice in this winning photo