Interview: Andreu Lacondeguy on Signing with Commencal, Freeride & His Plans for 2020 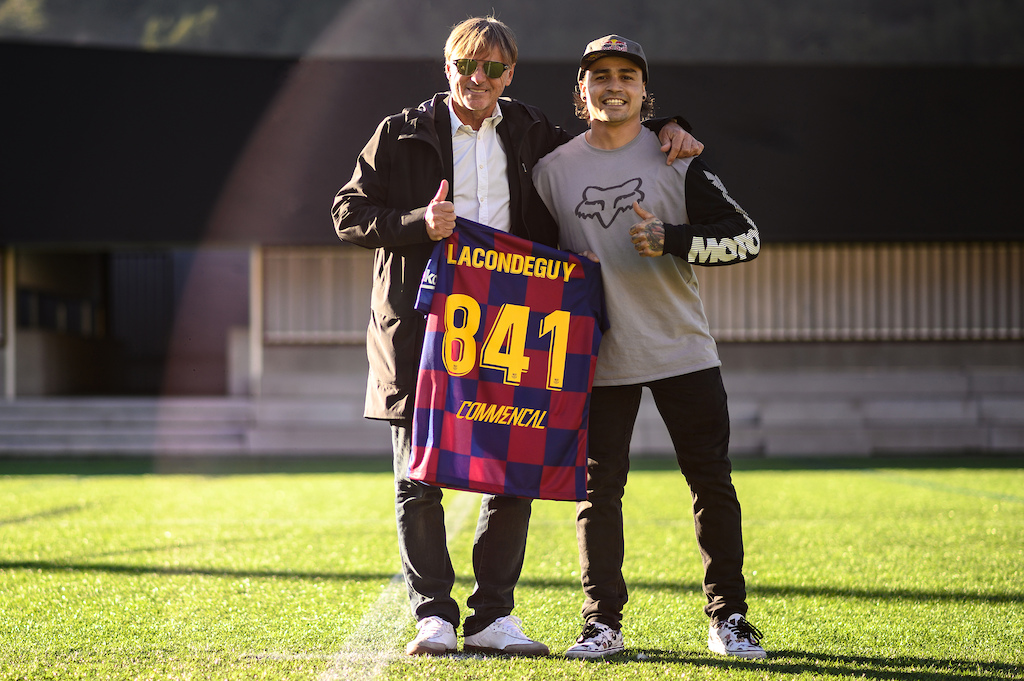 Andreu Lacondeguy just signed with Commencal after 8 years with YT Industries. We caught up with him to find out why he made the move, what his plans are for the coming year, and where the future of freeride is headed.

Why did you make the switch to Commencal this year?

Well, things went really well the last couple years. I'm happy about how things went with YT. I got a contract with them way back in 2011 and we both had the same vision. I was young and they were a small brand from Germany but things worked out for both, with Rampage win and podiums and an X Games medal. Years later, I feel like things worked out pretty well on both sides. In the past two years, I felt better than ever on my bike - the Fest Series, Rampage, working on some Red Bull projects together with some insane athletes and riding some sick locations was sick.

But in the end, I had been doing the same all over for a few years so I just feel like I need a change, a new program a new bike and a brand who really wants to fully support my vision of freeride and the perfect bike for it.

You'll be on the same bikes as your brother Lluis now. What is your relationship with him like?

I’m really stoked about that. We pretty much ride together all the time so it's gonna be awesome to do it on the same bike. We've both known the brand for so long. He is been on Commencal for 5 years now and I hope that having me jumping into the program will help to bring more content out and work on some sick projects together with him. Getting the new bike set up is been a lot easier than usual since he knows the bike and it's easy to share information to get the bike how I like it. We're both really stoked on working together on finding the perfect set up. 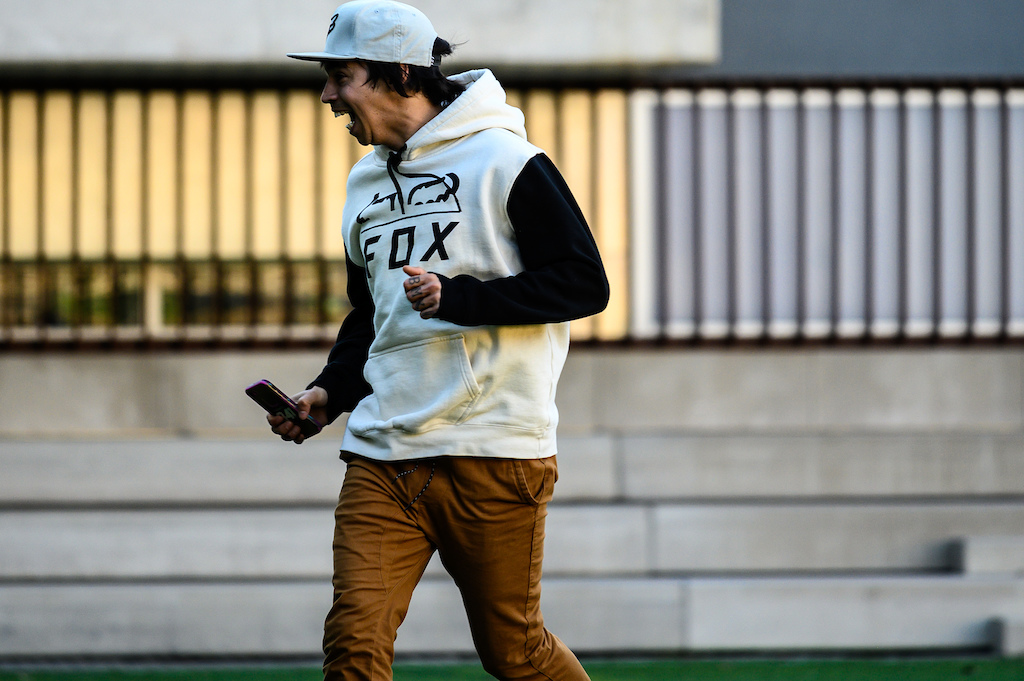 Lluis Lacondeguy is stoked to have Andreu with him on Commencal. 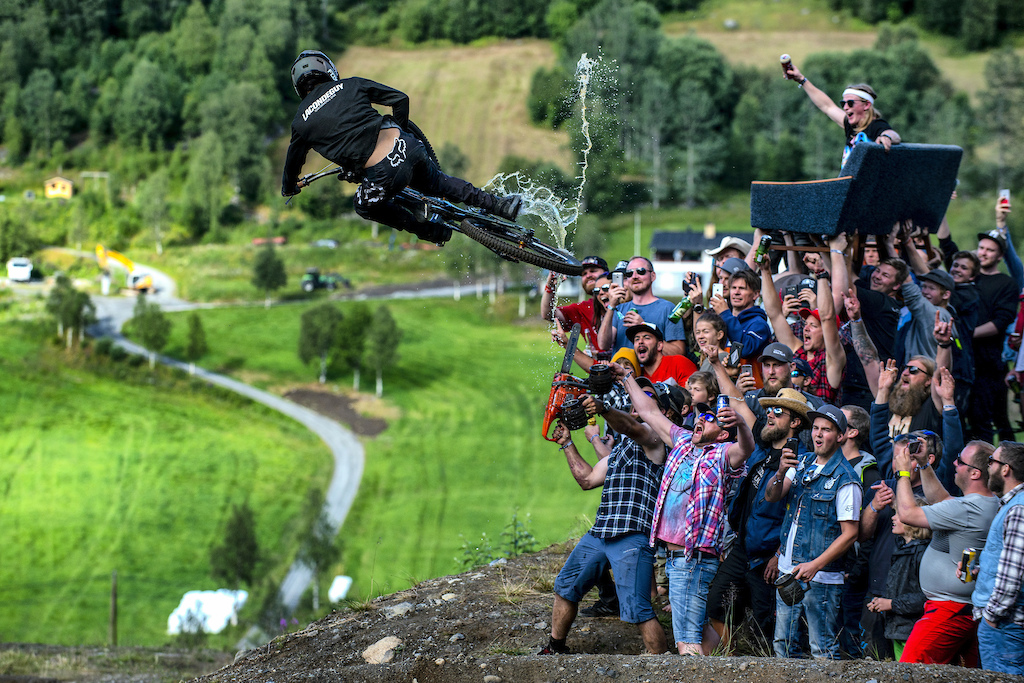 What were the days after Rampage like for you last year?

Rampage was pretty heavy this year, on and off the bike. I feel like I rode good and I was up there with the riding and the runs but, it just didn't work out for me. I'm not sure if there was a need to send such a heavy run, but to be honest I was 200% sure it was going to work. I took a heavy hit on the first run and 35 minutes later I had to send Run 2 in the wind. It was close. I almost died and almost won the event in 30 seconds, then I crashed into the dust and things went quiet. It was over and it was time to pack and get back home. Overall, I'm stoked about how things went. Not about the result, but about the riding. 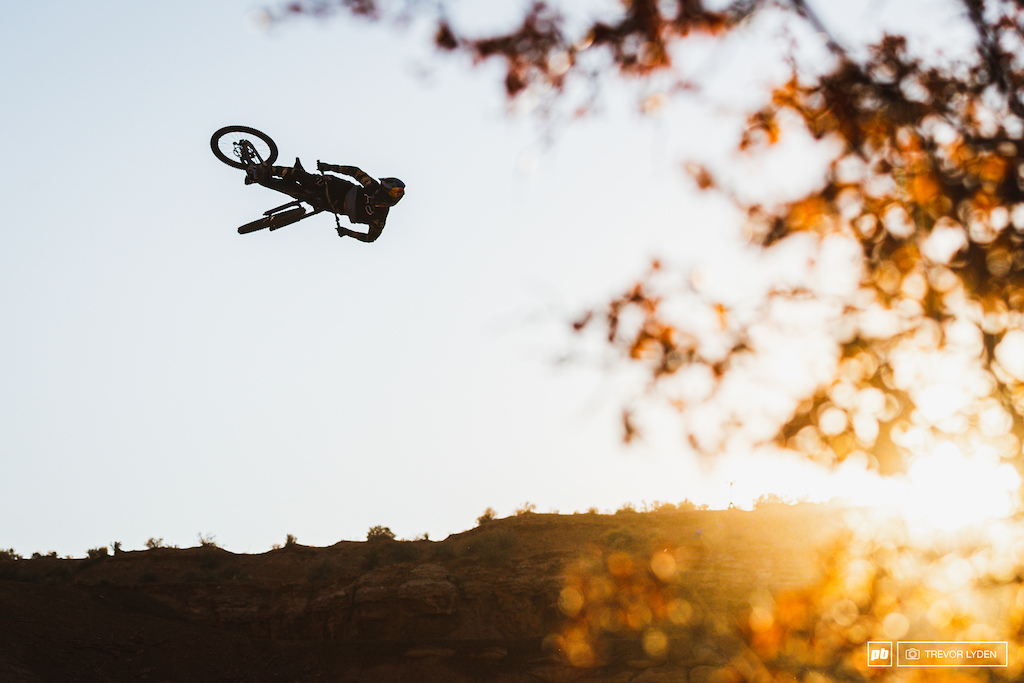 What have you been up to since then?

I have been home, building jumps and riding bikes. Things are good. The scene in Barcelona is getting insane, so I been riding and working on some new projects. I got a new program and that comes with a lot of trips and planning to do so I've been getting a few film trips ready and setting up the bike. I'm really excited about how the new bike feels and it's gonna be a crazy year for sure.

What are your plans for the coming year?

This year is gonna be different. I'm gonna work on edits and photos most of the time. I want to travel and find new locations, build new lines and find new zones. I don't wanna do the same thing all over. I feel like my riding is at its best now so I want to take advantage of it and ride as much as I can. I'm traveling to Chile next week. I’ve been playing on Google Earth and I really want to check a few things out over there.

We are also working on a pretty big freeride event in Saudi Arabia together with my brother and Mark Mclure but we will know more about that later. I will film a lot and we will work on a new freeride bike together with Commencal, something made to jump and shred for fun, so I'm pretty stoked on that. It's pretty sick to ride for a brand that not only supports freeride but that also wants to make the best bike for it. 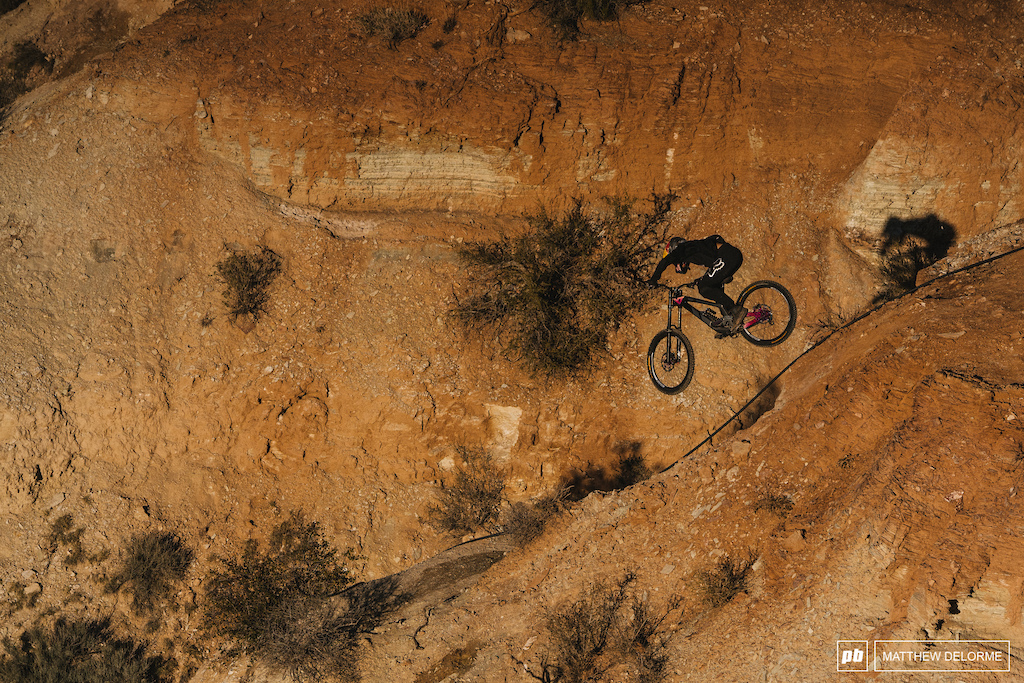 What was your best day on the bike last season?

We had some good days up in the Purcells in BC filming some sick alpine lines. We camped out there for 10 days with Aggy, Nico, Buehler, and outdoor Sorge filming for TGR. We had a heli and some sick toys up there. We rode some sick lines and did some Canadian activities like drink beer and eat tacos.

What’s something you’re working on with regards to your riding ahead of next season?

Well, I really want to freeride. I want to travel and find new zones. I think that I've got the experience to find some sick locations to film some sick edits and there is so much out there. The world is huge. There is a lot to ride out there and it feels like I been going to the same locations for years.

Who or what inspires your riding?

There are a lot of people that inspire my riding and I look up to so many athletes from all different sports, it's crazy. Action sports are changing so much nowadays, it's pretty sick! Corey Nastazio, James Stewart, Josh Bender, Matt Hoffman, Tyler Bereman, Bourdo... I could go for days...

What is something that Pinkbike readers likely don't know about you?

I don't really know what they know about me but luckily there are things they will never know and its better that way!

What do you think the future of freeride is?

I don't really know but our sport is getting pretty sick. Bikes are pretty insane nowadays and there are a lot of people into mountain biking. I hope that brands start pushing for freeride again and riders get more budgets to explore and film sick edits. The new generation is insane and there is so much talent coming up! 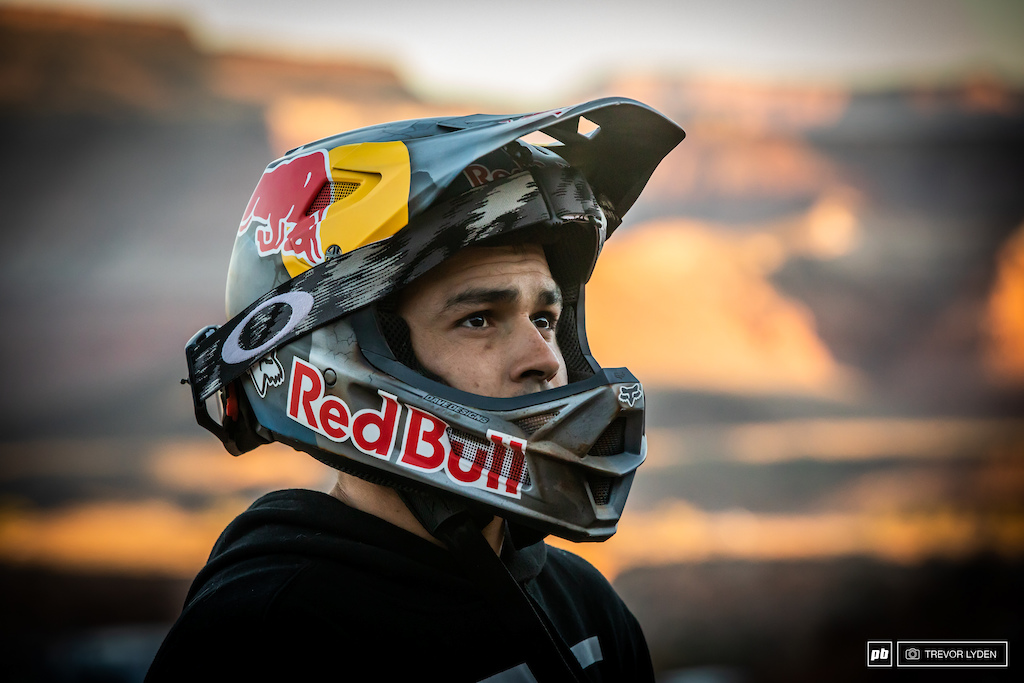 savagelake (Jan 20, 2020 at 21:12)
@mi-bike: since we have at least 5 distinct accents here, i'm always curious what an "american accent" is to other people. i assume it's usually california surfer dude, or southern rednecky. or just pronouncing all those hard R's...

jrocksdh (Jan 21, 2020 at 8:59)
@savagelake: fairly impossible to label 'american accent' way too much diversity...be rather ignorant to try.

chriskneeland (Jan 21, 2020 at 9:06)
@jrocksdh: True, but I will say, anything south of the Mason Dixon is damn near unbearable listen to.

plyawn (Jan 21, 2020 at 15:55)
@savagelake: my fav is the classic New Englander, though anything from Maine through Mass. is also killer.

southoftheborder (Jan 23, 2020 at 3:43)
@djm35: Interestilgly, I had the chance of sharing a shuttle to JFK with a couple from the UK (a certain suburb of London, can't seem to remember which one) and a guy from Las Vegas, NV. The couple was going through the pics they had shot while in NY, and the lad from Las Vegas got hooked on their accent, so he asked where were they from.

A few moments after we were all chatting and exchanging views on how vibrant and multi-ethnic NY is. The funny thing (to me at least) was how the English couple started exaggerating their accents and English expressions the minute they engaged with the rest of us. As in I was sitting behind them, and when they were chatting, they were speaking a much more neutral English. They only resorted to a much more pure form when engaged with non-UK English speakers.

Not saying this is a common thing, but having been to a couple places and having always defaulted to English to bridge the communication gap, it certailny catched my attention.

Slabrung (Jan 21, 2020 at 13:14)
Good they made it clear he signed with Commencal, otherwise I'd think he'll be riding Sick bicycles... oh wait, he would probably need actual bikes for this... nevermind.

sino428 (Jan 21, 2020 at 11:46)
@makripper: I like it. No need for the completely overdone press releases, photo shoots, edits, etc. Just a simple announcement. Here is what is happening and here is what we plan to do this year.

jeremyclark (Jan 22, 2020 at 2:00)
@makripper: well if you complain that is no photos of him, im telling you where they are. If you don't wanna look at shitty facebook apps then don't ask lol

NoahColorado (Jan 20, 2020 at 14:15)
"...and did some Canadian activities like drink beer and eat tacos." Were they moose and poutine tacos with crispy flannel shells or something?

ratedgg13 (Jan 20, 2020 at 14:54)
Hey man, I resemble that comment!
In all seriousness, bring the MRP gang up to Vancouver Island, eat at TacoFino (the original, not the chain ones) and ride Coast Gravity Park, then it'll all make sense.

brappuccino (Jan 20, 2020 at 14:07)
The jumps I hit aren't even visible on Google Earth... Andreu probably has to scroll from the take off to landing

My other favourite was on Donald Cerrone's gate which I took to be a warning to would be thieves: "There is nothing here worth dying for."

ingotaraske (Jan 21, 2020 at 3:28)
Yes they announced that. But I guess he rides 26 inch in the current Furious now. Did the same with YT. Not sure if they change the linkage for that

timrippeth (Jan 20, 2020 at 19:16)
Named dropped some OGs as being inspiring to him. So awesome how passionate he is about this sport and how much he respects other athletes. He has a great attitude about all of this.

Truthteller007 (Jan 21, 2020 at 1:23)
Saudi Arabia. Great to see mtb getting involved in the whitewashing of a nation. Even some in La Liga are pushing back against this.

jeremyclark (Jan 20, 2020 at 15:58)
Stoked to see him pumped on riding!! Can't wait to see some content from the brothers like the old times! Is that FURIOUS available on that color btw?

dsheffer (Jan 20, 2020 at 18:28)
hopefully commencal makes an effort to strengthen there frames after lacondeguy puts them through there paces. the clash and furious both crack in the same spot under the top tube close to the head tube.

ingotaraske (Jan 21, 2020 at 3:32)
Do you know how it happened, did you bottom-out heavily or it just wore out and cracked? My 2018 just survived the 2nd season in Vallnord and no issues so far. All rental bikes there are Furious, they are even selling them end of season.

PossumsDH (Jan 21, 2020 at 0:01)
This is the best team change news of the season. WC DH is dead. Soon the tracks will be a 3km straight fire road and the bikes will be 175mm triple crowns on 32er wheels. Freeride into the future!

metaam (Jan 20, 2020 at 16:54)
Anyone remember that old movie Dirt did with Alex Rankin, "Fundamentals"? I reckon Saudi could be the perfect place for a sequel. I, for one, would give my right hand to be part of it.

okei (Jan 20, 2020 at 23:49)
And me staying with commencal makes more sense. I want to support a brand that is keeping freeride alive and well.

digitalsoul (Jan 21, 2020 at 7:13)
Soon to be announced sponsors are Kleenex and Lee's Acting and Flopping School.

Juuzo (Feb 2, 2020 at 4:03)
@jeremyclark: Commencal should make 26" furious available for everybody
Below threshold threads are hidden