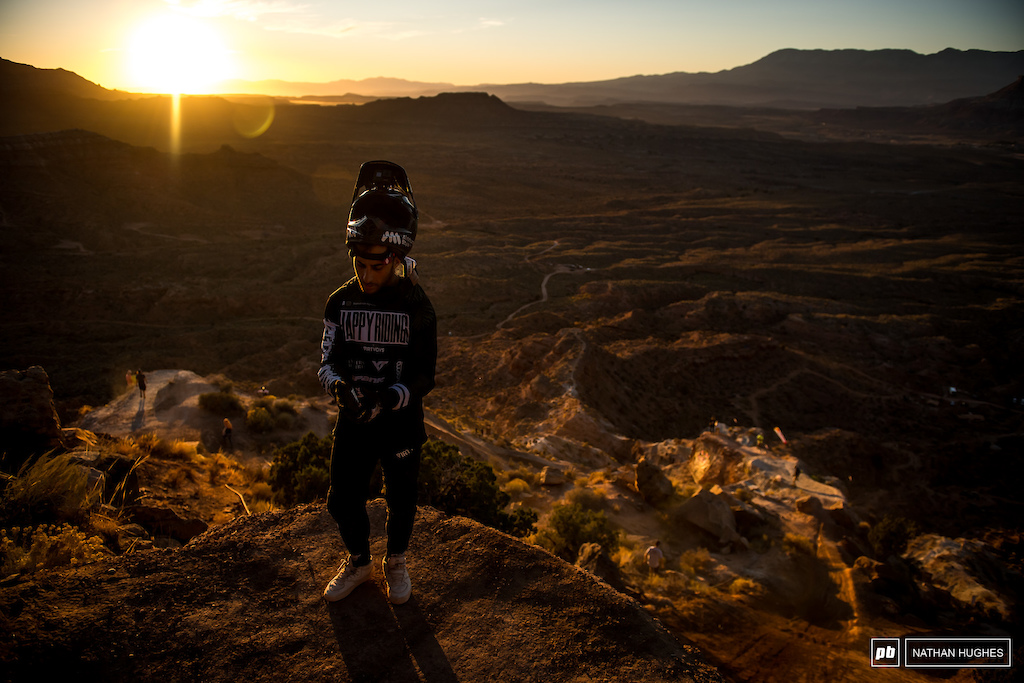 Bienvenido Aguado Alba came fourth at the Marzocchi Proving Grounds qualifier and was set to be sitting on the sidelines during the 2019 event until an injury forced Gee Atherton out of the competition. We caught up with the first-time competitor from Spain in a brief moment where he put his tools down.

What are your first impressions of Rampage?

This is a lot of work. Those hills are so steep. Super dry. Luckily we have hoses so that makes the work way easier. I'm pretty stoked with my digging crew. They work a lot and they're good. They're made some super nice walls. Then just a bunch of feelings - happy to be here, tired from shaping, can't wait to ride my bike. So many feelings at the same time.

How was finding a line?

There were 17 lines already, which makes it tough to find a new line. But with Johny Salido, we managed to do something new, which is so sick. We are working together from half of the way to the bottom. Then I have my own section on the top. And I'm really stoked on it. It's steep.

I will say that I was ready to do some slopestyle course since it's what I'm used to since I'm a dirt jump guy and I've been riding DH for two years now. But I found some steepness, so I'm tricking on the top and on the bottom but on the way down it's steep and techy and should be fast if I get comfortable with my bike. I'm stoked I'm doing something out of my comfort zone but I have time to get comfortable. 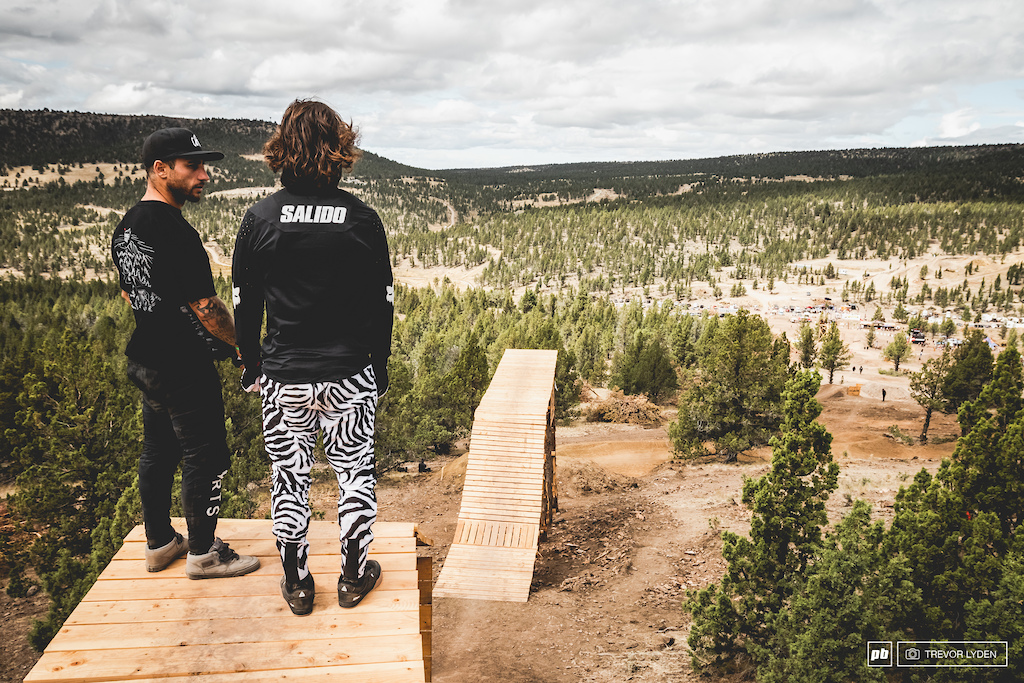 Bienve and Johny at the Proving Grounds qualifier last month.

We had some bad weather but luckily my first run got me fourth which was out of the straight qualification to Rampage but in the end, I got my opportunity. Not luckily for another rider - Gee. I have so much respect for him but that's my opportunity and I take it. I'm super stoked to be here. I hope to make him proud and everyone else. 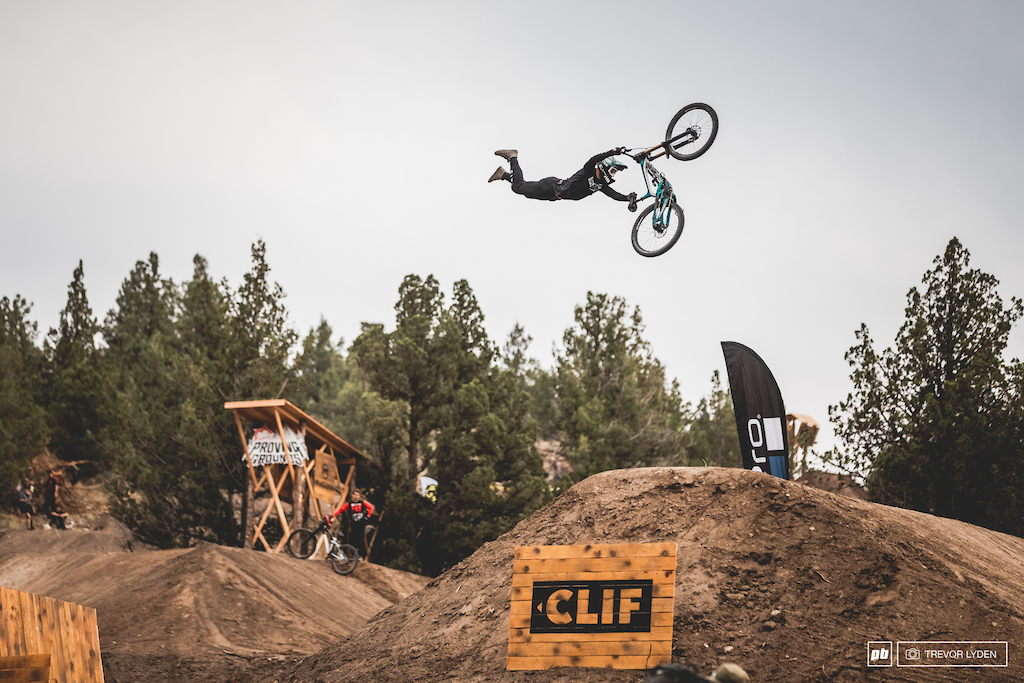 Bienvenido Aguado had an amazing start to his run at Proving Grounds with a massive front flip off the meat cannon.

What was it like to get that last-minute call?

I will say I paid 30% extra for everything - the car, the Airbnb, the flight. I had just 10 days to figure out how to bring my diggers here, my bike, get sorted with new gear and a new helmet. I had a helmet but it was f*cked. I just wanted to have a new one. The guys from Spain - Living This Bikelife, they killed it. In a week I had a new helmet, gear, my bikes. The guys from YT they also killed it with a custom frame. I feel ready.

The only thing I regret a bit is that I couldn't come earlier and get used to the terrain and the exposure. I was supposed to get three days of riding but my bike got lost so I got two days of riding. Those two days were epic. I did Kong and some chutes, some lines, some jumps, but I was jetlagged. Hugely jetlagged for those first two sessions. Not the best and most comfortable riding ever but enough to get on steep spots to get used to steepness. I feel ready. I just can't wait to relax my body a bit because I'm tired and then go again. I need to go up the mountain with my bike now. Tools are exhausting. 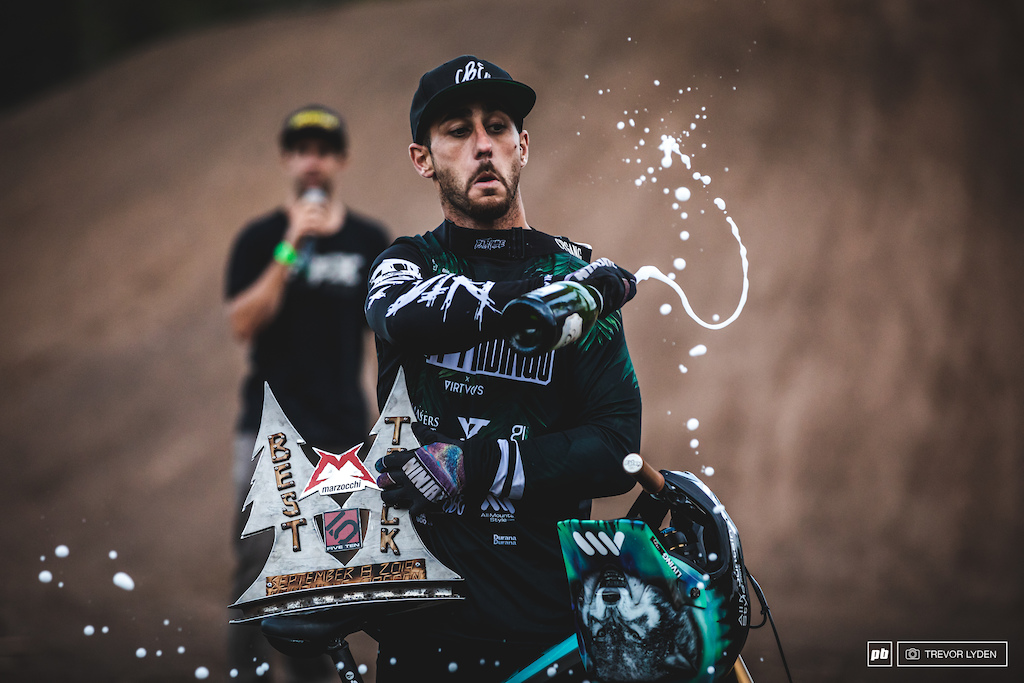 Bienve won best trick for his massive frontflip off the meat cannon at Proving Grounds.

Two weeks ago! Proving Grounds was such a slopestyle course. I mean big, but just features - drops, berms, step-down, on-off, and stuff. Stuff I was used to. The steepness over there is techy. The King Kong lap here made me realize what I needed and my set-up is going to be a bit smoother than what I'm used to. I'm normally just going hard and super slow rebounds because I'm a jump guy, but I need be able to put those wheels onto the steepness and feel in control.

How did you find your build crew on such short notice?

One of my guys is from La Poma Bike Park. It's such an epic spot in Europe. They've done dirt jumps for 15 years. Ivan Carmona, he's a downhill racer as well so he knows how to see the lines over the terrain and he's such a nice digger. He loves to do some beauty shaping. My other digger is Henry Wilkins, such a good guy with experience as well. They're killing it. I'm trying to do some work but they do three times more than me. I suck as a digger and a mechanic, I'm a rider you know. I'm used to riding not digging.

Any thing else you want to add?

So thankful for being here. Just trying to enjoy the experience and to make everyone stoked on my riding. Leave my mark - that's what I want.

counterpoint (Oct 23, 2019 at 10:32)
holy crap. Gets to the event late, never really ridden anything like it other than Proving Grounds? Jet lagged to hell then days of digging, not riding. Barely can scrape together sponsor stuff and dig crew. Best lines are taken. Oh, riding less than 2 years of DH... ? I would say "good luck, dude" but then I said the same about Adolf Silva last year and he blew me away and was the comp's most exciting rider by far. Super bummed he's not in it this year.

Braench (Oct 24, 2019 at 2:08)
If you never heard of this guy before you will be surprised...hes a machine and a really nice guy!
This year he took part at the Saalbach Glemmride Slopestyle on his DH Bike...he still Frontflipped and double flipped the jumps

Gavalar66 (Oct 23, 2019 at 11:33)
What always gets me is the helicopter, the amount of certified drone pilots out there, they could follow any rider, every rider, through every inch of their run to fully appreciate what goes into a run, yet all we have is pan shots and a helicopter, this could be so much more immersive rather than, MEH.

markcorrigan (Oct 23, 2019 at 15:59)
I see your point but with the potential wind and exposure out there though it's an accident waiting to happen. You just need one rogue drone pilot getting too near and that's game over for a rider once a drone blows into his face just before a 50ft drop.

scott-townes (Oct 23, 2019 at 16:04) (Below Threshold)
Oh yes, flooding an area with drones and helicopters just for the fans' amusement sounds like a brilliant idea..... good lord.

Uncled (Oct 23, 2019 at 10:59)
excellent coverage so far this year, now all we need is for Red Bull to pay for it to be filmed decently, like close enough to be able to see what the rider is doing coming down their lines...

GlassGuy (Oct 23, 2019 at 12:09)
and without the added sound effects of last year...the "bikes" sounded like a bag of bolts and washers each time the rider landed or turned. I'd like to know who thought of this "addition"

maxwellington (Oct 23, 2019 at 12:13)
Nah, we need heli shots from directly above the rider to flatten the mountain out and confused the perspective as much as possible!

onemanarmy (Oct 23, 2019 at 10:52)
That dude is loads of fun to watch ride and he puts in the work. Definitely one to watch if he can go top to bottom. Juan Salido too. Dude's got the eternal stoke and a gift to go big. This rider panel for Rampage this year is freaking stacked. Always is but this year... honestly... anyone of these dudes can win it.

Thebikevillage (Oct 24, 2019 at 4:40)
Eseeeee! We are stoked to see Bienve at the Red Bull Rampage, he is more than ready, he will blow your heads off with his huge frontflips. Vamosss!

Ironchefjon (Oct 24, 2019 at 5:04)
those crazy spaniards are in a close race with the canadians for gnarliest nationality

lobohusky (Oct 24, 2019 at 11:17)
Best of luck Aguado! You earned the right to be there and wish you all the best in your first Rampage experience!

McArdle (Oct 23, 2019 at 11:43)
Yeah good luck man, sounds like you may need it!!....I can’t even comprehend what the terrain is like never mind weather/humidity/dehydration/fatigue!!

However this doesn’t sound good either...
“I suck as a digger and a mechanic, I'm a rider you know. I'm used to riding not digging.”...You’re in the wrong comp mate!

McArdle (Oct 23, 2019 at 14:30)
@endlessblockades: He definitely seems willing to learn.
I’m not doubting his riding, that is clearly up to par, it was more the comment about not being used to digging I initially referred to.

In fact I don’t doubt anyone’s riding ability in this comp, whole heartedly the opposite as watching even the POV’s scare the shit out of me so respect to all of the riders and diggers out there, but in all fairness I think that this is what makes this event so special, the camaraderie between riders/dig teams and the awe inspiring tricks and lines thrown down in this mental landscape!

scott-townes (Oct 23, 2019 at 16:08)
@McArdle: Darren Berrecloth, Cam McCaul, Brandon Semenuk, Cedric Gracia and Kelly McGarry are all legendary riders who had never ridden in this area before their first time competing at Rampage and there are many others. It'll work out just fine.