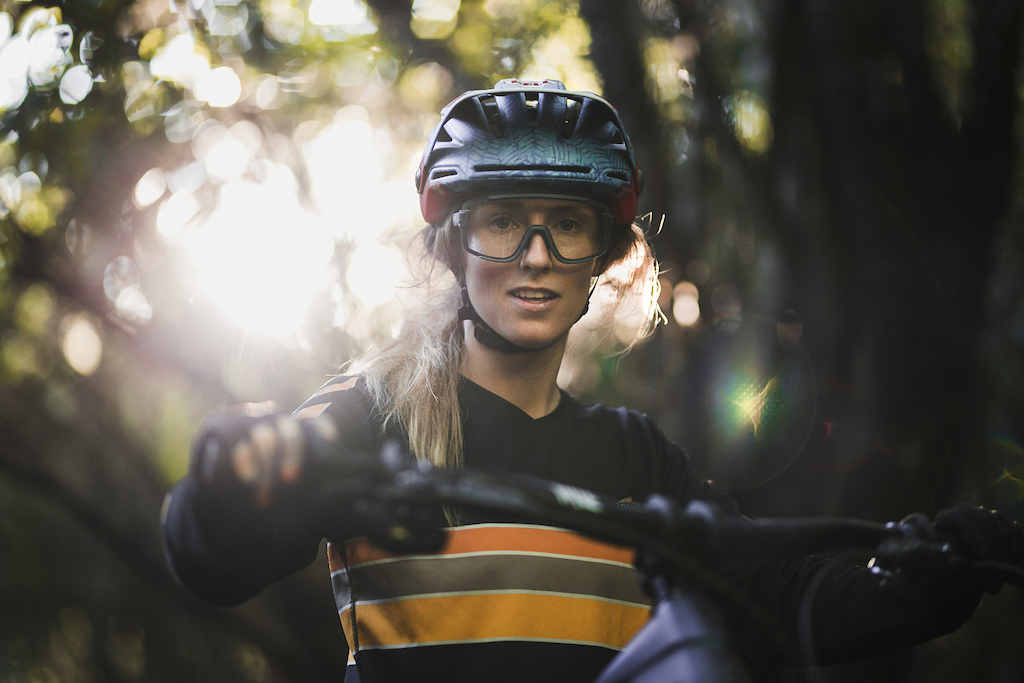 Dakine’s MTB Marketing Director Gabe Schroder said they don’t have a set formula on which athletes they pick to work with on collections, but when they were launching a new women’s bike line, it was a no-brainer to work with Casey Brown on her own signature line.

“I am excited to celebrate one of the gnarliest riders of our time. We can all learn from Casey’s bravery and approach to life, and this collection symbolizes our commitment to Casey, and women’s riding in general,” said Schroder. “Aside from Casey being our top female rider and our desire to promote our updated women’s line, Casey also fits in perfectly with our theme of Progression for 2020. What she is doing on her bike, and where she has come from to get there, is very inspiring and the definition of progression.”

How did the discussion start? Did you approach Dakine or did Dakine approach you?

They came to me at Rampage and they wanted to renew my contract and do a custom kit that was my signature line. I’d always seen Aggy’s line and other people that have their custom stuff and it’s all for sale and you see people wearing it in the bike parks. So that was a pretty cool opportunity and I went for it.

Did they basically give you a blank slate to create anything you wanted to?

We went back and forth a lot. I’m pretty particular about what I like to wear when I ride. I thought it was a cool opportunity to give that side of me, the artistic side, a go and a chance to figure out what a good kit for girls could look like in my eyes. I threw around a few ideas and I ended up with one that I’m psyched on.

You're a pretty artistic person, is that right?

I mean I like to draw sometimes. I’m not great or anything. I enjoy it though. It’s kind of a meditative thing for me.

What was the inspiration behind the final design of the kit?

I had a few ideas. I wanted to have it look semi-casual and have a little bit of an old school feel - old school moto vibes. That’s where the design came from, the colours and having it mostly black and not too busy. I think I did an okay job on making my ideas come to fruition.

It’s very different from a lot of women’s kit we see out there. Do you struggle to find women’s mountain bike gear that appeals to you?

For sure. I would mostly just wear a men’s small T-shirt when riding because I’m pretty particular. I don’t want to wear something I’m not stoked on. I feel like it affects my riding. You have to feel good to ride good. 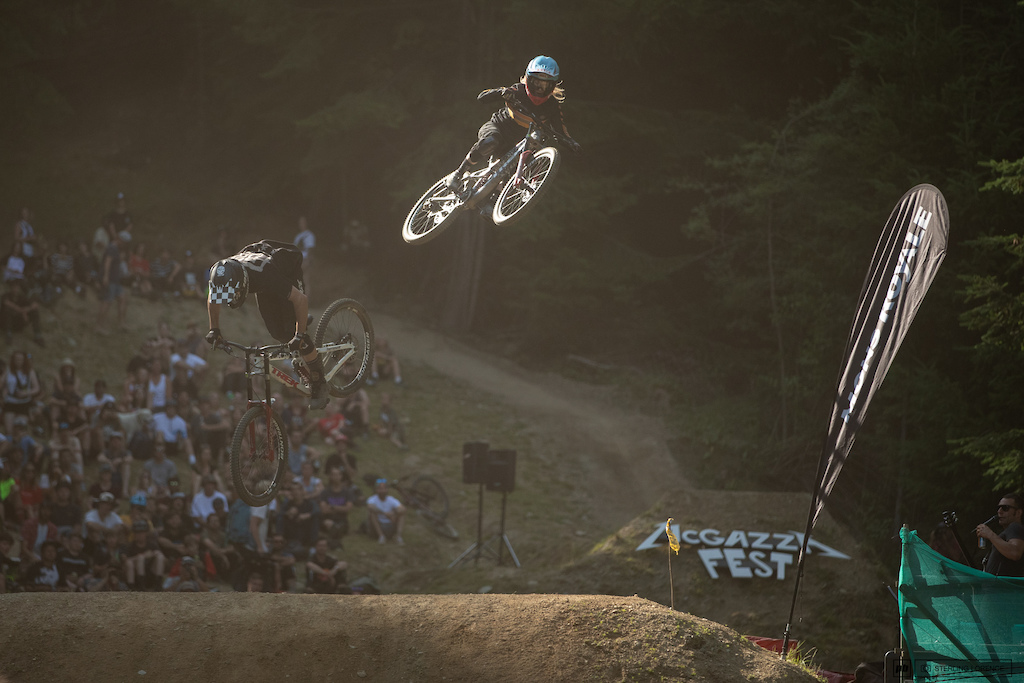 A lot of the riding you do has pretty high consequences. Do you put different care into your kit depending on what line you’re attempting?

What are some of those elements that people might not notice when they see a photo of the collection online. Things that you worked with Dakine on that aren’t visible to the naked eye?

I’ve never liked gloves that have padding in them because I feel like it creates a barrier between you and your bike. I want to make sure I’m feeling everything that’s going through the bike from the tires. The more you can feel through your bike, I think the better you can ride and react to the terrain. It’s a super close-fitting glove with very thin leather on the palm that feels really good on the handlebar. When you put it on, it’s tight but it feels ready for performance.

The jersey isn’t super tight, it’s got more of a loose casual feel to it. It's nice to have the breeze go through your jersey a little bit. I’ve worn tight jerseys before and then you sweat and it sticks to you. It’s those little things that can get in the way of performance sometimes. I think having a super comfortable kit that performs well is super important. Another thing is that the jersey is made out of recycled bottles so I think that’s a pretty cool side of it as well. It’s better to use the resources that we’ve already got out of the Earth, rather than bring new resources out of the Earth to consumers. 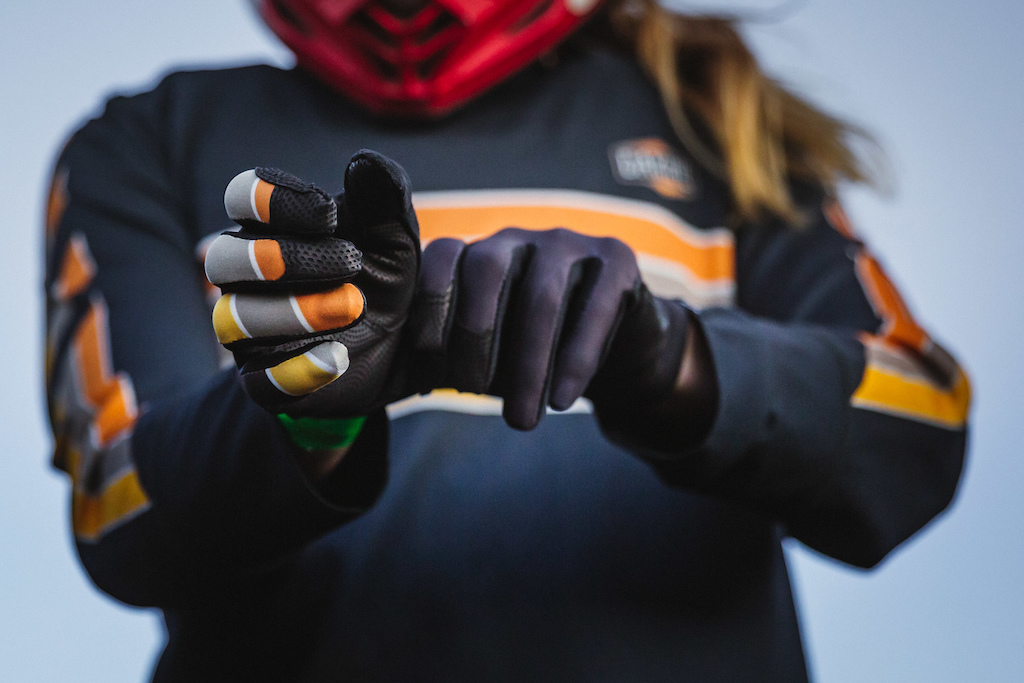 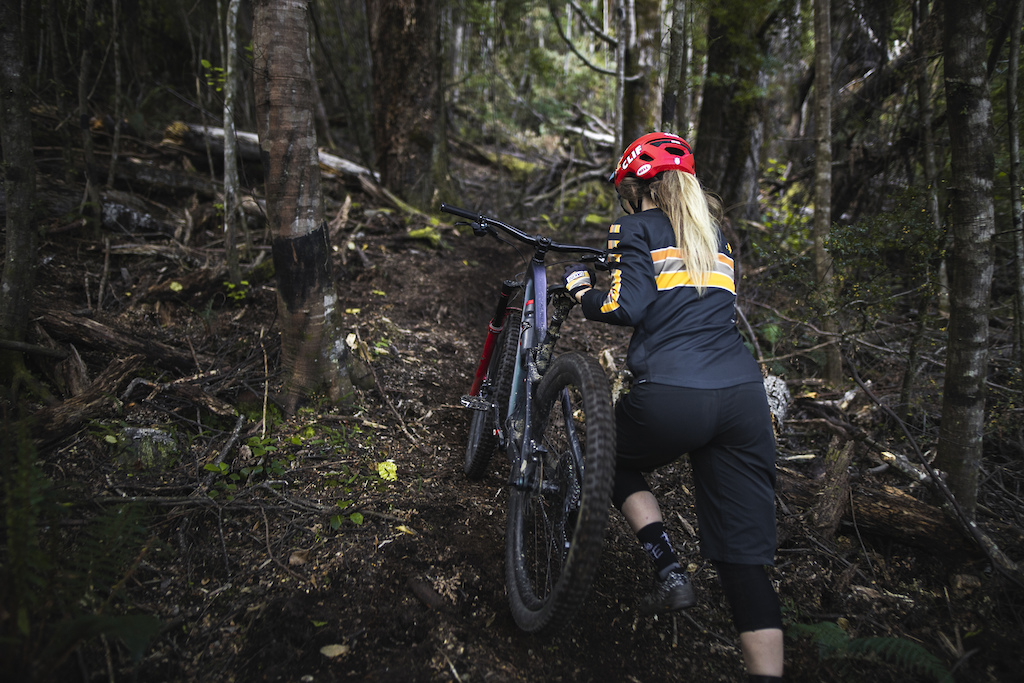 How long did the process to design the kit take?

It took about a year. We started on it 14 months ago. We knew it was a 2020 thing so we had the time and wanted to make it not a rush job obviously. Good things take time. We went back and forth... I don’t even know how many times. It would always be those little emails like ‘could you put the stripes on the back too?’ All those pretty logos on there are pretty cool too like my dog Snuff is on there too. It’s cool and tough-looking but it’s still super cute.

What does it mean to you to have a collection designed and named after you?

It’s pretty surreal. I never even thought I would make it as a pro mountain biker. I thought it was a pipe dream. To have my own line is a dream come true and I hope that I’m making all those young girls out there that are getting into mountain biking stoked on it, and I hope they enjoy the kits. 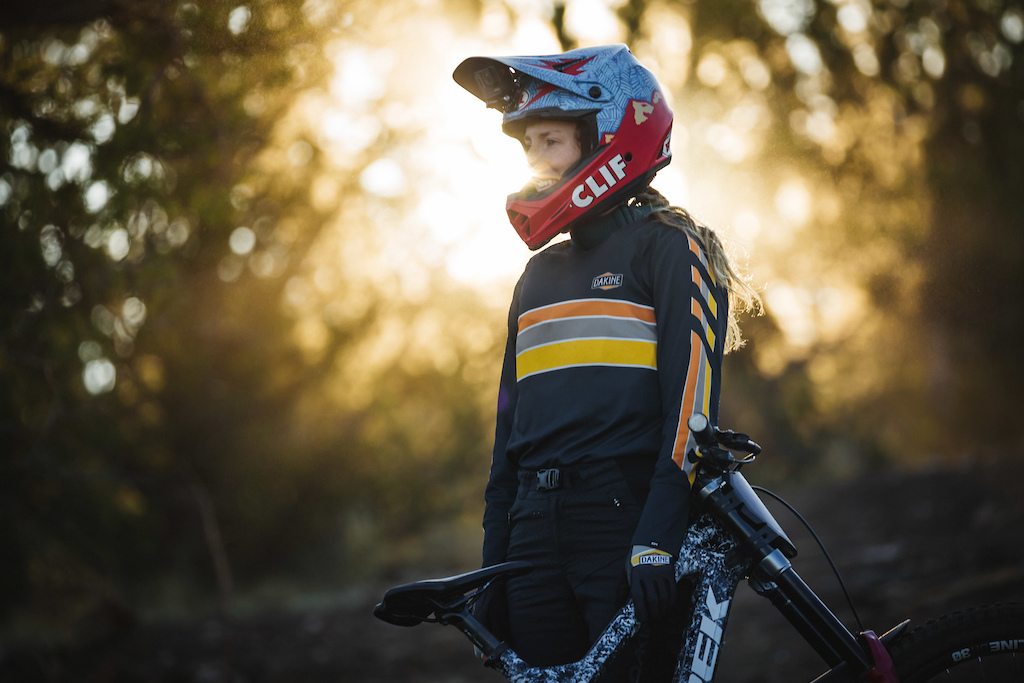 Who are you hoping will purchase this jersey and wear it?

Well, I’m hoping every girl will want to purchase it and wear it but I’m also hoping to make the guys super jealous because they don’t have one because that’s what I’ve been dealing with my whole life. Like damn, that doesn’t come in a girl's size? The idea is to make a jersey that stokes the girls out and the guys as well.

What do you think your reaction will be when you first see someone wearing the kit?

I’ll probably hand out some high fives if we’re allowed by then.

I imagine your plans for the summer have changed as have most people's. What are you focusing on in the next couple of months?

I think it’s a cool opportunity. At least we’re in a sport where we don’t have to be in big groups and we can come up with creative ideas to still ride and entertain. So we’re working on hopefully a road trip around BC if we’re allowed to this summer. I want to ride the zones that don’t get hit often because they’re just a little bit too far and people don’t want to put the effort in to get to them.

Try and do a little road trip like that, a lot of camping, and enjoy BC while I can. Because we don’t often get to be in our home country that has the best riding in the summer months because we’re always travelling during the summer months. So it’s actually quite nice to potentially have a summer in Canada.

Are there any riders that you would want to ride with or do some filming with?

There are so many people that I see at contests and at Crankworx and stuff. We see each other all the time but we never get to do the casual fun rides with. So hopefully we get more time to do that kind of stuff. Like our buddies in Squamish - ALN and Miranda and stuff. Those people that you see all the time but you barely ever get to ride with causally. So hopefully we get to do more of that kind of stuff this summer.

bobinstien (May 5, 2020 at 12:35)
Most brands don't even carry stuff small enough for me in the male section so I buy womens anyway

kagenluedemann (May 5, 2020 at 13:22)
That's the point... as men, we get all of the designs and clothing options to fit our body type. Women often do not and I'm happy to see Casey Brown launching a line of women's specific clothing with Dakine.

Unrealityshow (May 6, 2020 at 5:22)
@kagenluedemann: I find it damn near impossible to find clothing that fits me or my body type. But yes, women deserve to find some clothing that works for them.

DidNotSendIt (May 5, 2020 at 14:18)
Mission accomplished on making me jealous the designs are women only. But fair point.

In fact, a lot of the women's apparel the last year or so have made me envious. Nukeproof and TLD in particular (as well as the above).

Now manufaturers need to do some psychology/product research to find out what switches on the magpie* instinct in female riders the way they have done for the male market (if indeed there is any difference at all). Then watch the cash roll in.

And if they can turn the female market into the cash bonfire that that the male market is, perhaps this will encourage brands to develope and promote their products equally. This could mean a more even representation in the sport. But as a result you will end up even worse off financially (due to the aforementioned cash-bonfire that is is 'buying bike stuff'.

*Magpie instinct: when you see new stuff and say "i need it" when what you really mean is "I'd like it" and you keep throwing money at it until it's yours and you don't tell people who care about you how much you spent.

Disclaimer:
Given that i do not see that many articles etc regarding female-specific products, i'm only assuming the existance and/or extent of under-representation. I don't actually know any female riders, so maybe The Canadians or similar (whom i understand have a more balanced mix of riders) could better inform me. Anyway, i just hope it's taken as the tongue-in-cheek observation it was intended as.

maybenotaprofile (May 5, 2020 at 12:59)
The jersey made out of recycled plastic bottles is a very nice move! I hope to see more of this attitude amongst the other brands in the future!

chriskneeland (May 5, 2020 at 13:06)
I got my hands on a pair of Aggy's Thrillium pants and they're pretty much everything I could want in a pant. Unfortunately it looks like Dakine only made 12 of them because they've been out of stock for the last year.

dakine (May 5, 2020 at 13:37)
glad you like them. We should have more Thrillium pants available in a few weeks if you want to snag another pair.

lehott (May 5, 2020 at 19:57)
The aesthetics are good but overall design is a meh. Surely something more artistically expressive would look better than 3 colored lines on a black canvas print. Not bashing, but c'mon Dakine!

savagelake (May 5, 2020 at 15:51)
well, ur sorta right. they just laid off 39 peeps, and moved from oregon to california. not sure how moving to CA helps. maybe it was in the works and it is just an excuse.
www.bizjournals.com/portland/news/2020/05/05/outdoor-apparel-maker-closed-oregon-offices-lays.html

bulletbassman (May 5, 2020 at 17:38)
@savagelake: so wierd to announce a signature line the same day you announce closing the office that designed it

mikeinhoodriver (May 6, 2020 at 10:10)
@bulletbassman: Its because the riding is so much better down there, hahaha. If you notice in the many press releases, they are focusing on lifestyle, travel, etc... IE: luggage, clothing and token surf gear. So lame.I hope a better company picks Casey up, she deserves better.

jobruski (May 5, 2020 at 17:28)
She nailed this design. Hopefully this is just the first of many seasons for this collaboration. Nice job, Casey!!

anchoricex (May 5, 2020 at 15:14)
i was hoping for more insight into the romantic world of brett/casey. idk why, im bored. and lonely.
Post a Comment