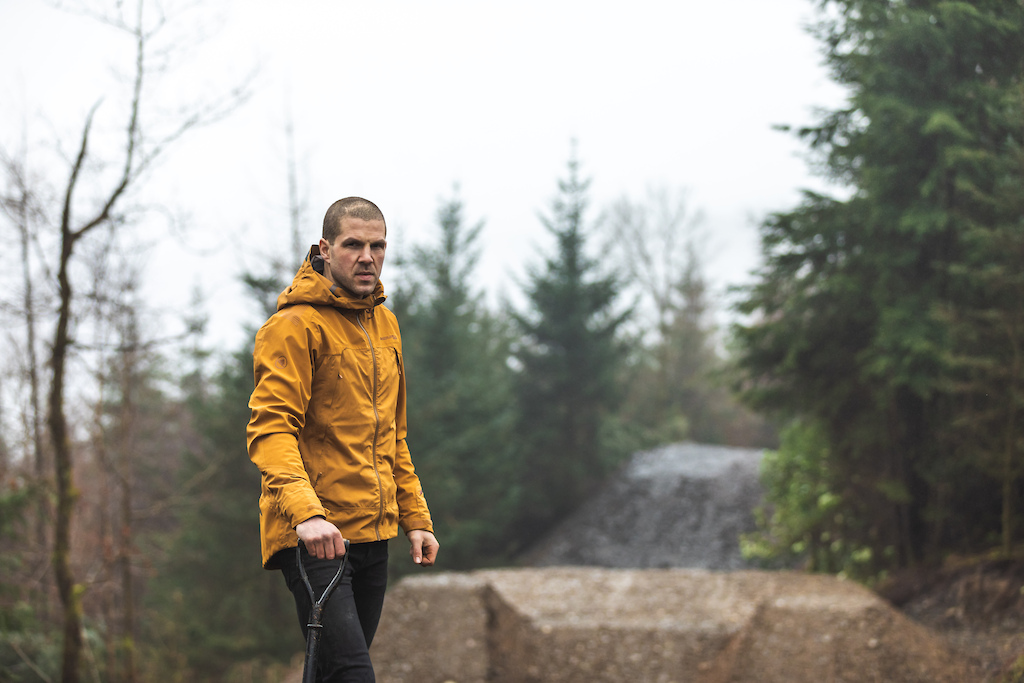 Give yourself an introduction?

What does Hardline weekend entail for you?

The weekend is actually pretty chill for me. It's the months leading up to it that are gnarly. You’ve got to try and make sure you’ve got a solid crew together, who you can trust on the mountain and will get stuff done without you shadowing them all of the time.

So this is Hardline's 7th year. Does it get any easier to set up the course?

Honestly, I think it becomes way harder. The first few years everyone was just hyped to have a different event. We literally threw a big road gap in and a few dirt jumps and everyone was super stoked on it. But now some of the riders, like Gee and Bernard, they've pushed it so hard over the years and they're hungry for more. It's hard to find that balance between having new riders being okay on stuff because they've never been here before, but then having something for the boys who've been year upon year.

How long does it usually take to set up roughly?

Well, the first Hardline we did we were actually racing in America when we got a call from Red Bull saying we could go ahead and we banged it out in six weeks. But now it's a good four to six-month project.

Do you think the hill’s got more to give?

Yeah, I think the way it's going whatever we build the riders are doing it. It's so mad to see like the bar go up every year and you kind of think where will it stop! But, you know, I don't really think it will, the riders just keep improving, technology keeps improving and it’s mind-blowing.

I'm pretty sure I read somewhere that you said if they keep tricking jumps you're going to keep making them bigger. Is that true?

Well that's kind of happened this year but at the same time, it is Hardline it's not a World Cup, so it doesn't want to be too serious. I think seeing Kaos and those boys last year flip and stuff was for me just as exciting as watching them stomp those be drops. 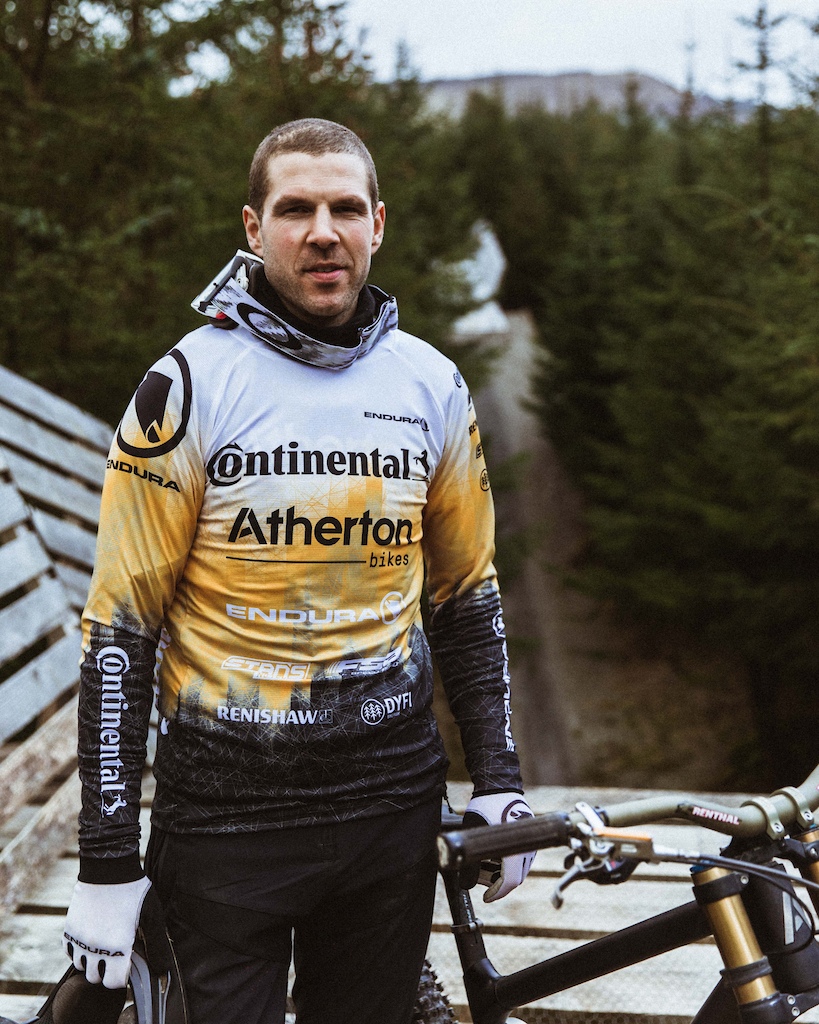 Do the riders make you develop the course more?

Yeah, but I think the riders have a lot of input now. Yeah, the first few years it was kind of just me and Gee. Now Bernard has a lot of input, Kade and Kaos were up here giving feedback. Getting input from other riders makes for a better more rounded course rather than just being all coming from me.

Where do you find inspiration for each feature?

I think it's coming from years and years of racing and riding all over the world. You remember a sick jump you rode there or a road gap and then just trying to work with what the hill has to offer to replicate that.

What was the hardest feature for you to build?

The landing off the drop after the step-up was so hard! The boys have been on it for literally weeks just trying to get it hard enough and the weather has been crazy hot it's been impossible to pack. The boys have put so many hours into that landing.

You obviously get to ride a little bit of course, which bit of it do you enjoy riding yourself?

Would you ever like to design a World Cup course?

Nah, I think the hype from the course comes from having the locals involved and having a sick dig crew who throw all their passion into it. I think if every World Cup had that then their courses would be dialled!

Speaking to your dig-crew, do you want to want to give any shout outs?

Alf Raynor he’s headed the project. Jamie Robertson, he’s got the road gap super dialled this year with the D3 guys. Jim Monro who was racing here, that dude digs all week and then rides so hard at the weekend. Wilf Carey, Snoop, Bentz and Sam Malster, it’s amazing.

What do you think is the easiest bit of the track?

Over the years it's been the road gap, it just never seems to have claimed anyone. Even though it's so gnarly, all the riders respect it. You can see, when we’re sectioning stuff, everyone takes that gap seriously but everyone gets air.

What’s the hardest part of the track?

Probably the tech stuff like the huge cannon out of the woods. That just seems to always claim people, there are so many variables, and yes it’s a massive jump.

Where do you think the race is won and lost here?

Honestly, I think is like the first two days of practice. You need to come in with a strong, positive mindset and be able to hold that positive mindset throughout the week, even as you see other riders drop out.

Thanks again to Dan for taking the time out to chat with us.

robert-smith (Jul 27, 2021 at 2:46)
The dig-crew deserve big props on this, no accommodation living in tents and cars next to the course! fair play lads, amazing effort.

sadfusde (Jul 27, 2021 at 1:29)
Imagine a series with only tracks like this one... I reckon not that many would be up for it and even fewer would make it till the end, but damn, would it be incredible

sino428 (Jul 27, 2021 at 6:56)
It would probably be too much, but I love it as a stand alone event. It’s almost like a combo of a WC race and a Fest event. It’s a race but in the lead up it’s just a bunch of guys sessioning huge jumps and pushing each other.

URSES (Jul 28, 2021 at 20:12)
If every every World CUp track just had 1 or 2 bigger features I think that would push the field and add another element to the racing

el-nombre (Jul 27, 2021 at 4:38)
So which one is the cannon? I feel like different riders have referred to 2 or 3 different things by that name. Is it the boner log thing into the last field? Is it the one coming in to the big metal step up ramp? Got the implication from one of the interviews that the metal ramp may even be the cannon.

leon-forfar (Jul 28, 2021 at 11:13)
@nojzilla: In slopestyle, they used to call Cannons Boner logs. I guess since the sport is becoming more mainstream, they figured Boner Log wasn't PG13 enough. On the hardline course, the Cannon was in reference to the long one out of the woods before the big jump as mentioned.

Jrtf (Jul 27, 2021 at 5:51)
Defo need to keep the gnar in tho no complaints but that new drop cut out so much natural gnar I just fear itl become a rampage line.but all the same Dan,his crew and redbull provide the best race of the year

mbspencer (Jul 27, 2021 at 14:37)
Keeping those old gnarly lines serviceable would be a nice option for days when it's too windy to hit some of the bigger features

leon-forfar (Jul 28, 2021 at 11:16)
I think that drop into the chute with the corner was WAY sicker than natural gnar. That section was probably the highlight of the course. That poor poor berm. I thought every rider was going to die in that corner; it didn't look like they were slowing down enough and that BRAP. Mega props for the builders making that landing and berm support everyone.

naptime (Jul 27, 2021 at 2:37)
Was at Dyfi the week before an got in an uplift Landy that Dan was driving.... Yep! that was the fastest uplift that day! Awesome dude too had a good ol chat RAD stuff

chakaping (Jul 27, 2021 at 7:54)
It would be one of the few spots in the UK that could easily host a WC-standard track - and it'd be a more exciting course than Fort Bill. But... Dyfi is a remote bit of west Wales without a lot of tourist infrastructure or funding, so it's very unlikely to happen unless the UCI changes the criteria for hosting rounds to be less about how much money they can extract from hosts and more about the standard and variety of tracks.

djm35 (Jul 27, 2021 at 8:30)
@chakaping: I don't think it's got any real mountains, further north in Snowdonia they get bigger and there would be more potential for a decent length track, but there would be issues with things like uplifts, land designations and bad weather. There is plenty of tourist infrastructure but it's only on a small scale, I know this from studying Countryside recreation and tourism at Aberystwyth Uni which is pretty close by.

chakaping (Jul 28, 2021 at 1:38)
@djm35: I know the area reasonably well myself and yes there are bigger hills in Snowdonia, but the National Park Authority is quite anti-bike - and Dyfi is much less busy while still having enough elevation (as Hardline & Dyfi Bike Park proved).
I could have made my point about the infrastructure better. Yes there is accommodation & nearby towns & resorts, but Fort William markets itself as an adventure destination (and probably has some Visit Scotland funding in addition). Basically they have their shit together up there in a way that Wales doesn't really... yet.

PAmtbiker (Jul 27, 2021 at 7:41)
I love how much this one event has progressed the sport. Remember how long it took people to hit the big step up cleanly six or seven years ago? Now it's just normal. This is doing to DH what Rampage did/does for freeriding.

alwaysOTB (Jul 27, 2021 at 4:36)
What do they do with the course after it's done? Most blokes would need to be airlifted out of there if they tried, but I know some mfos that would give it a go.

OlSkoolJake (Jul 27, 2021 at 5:57)
It's not open to the public after. Sections are blocked off. Most of the big features are removed or blocked.

TurboTorsten (Jul 27, 2021 at 8:11)
most likely something by endura as he and the whole atherton family are sponsored by them.

DoubleCrownAddict (Jul 27, 2021 at 6:45)
My only complaint is that the features should be wind proof, so they don't have to worry about the safety of riders during windy conditions or close things off.

DoubleCrownAddict (Jul 28, 2021 at 22:09)
No just jumps that aren't such a long stretch for the riders so they can still clear them in windy conditions. The Rock trail sections could also be improved, to be more fun and spectator friendly.

juliuskliemmtb (Jul 29, 2021 at 3:39)
@DoubleCrownAddict: Is it about spectator fun or is it about a challenging course for the worlds best to take on?
For me, it is very interesting to watch riders struggle with a gnarly section with different lines/approaches etc.

juliuskliemmtb (Jul 29, 2021 at 3:41)
@DoubleCrownAddict: Make them shorter, so as long as there is no headwind you would just obershoot them. What’s the point?
Why don’t build every rampage jump as a table so riders can roll over easily and with no risk

wasabijones (Jul 27, 2021 at 4:56)
Is this a race or not? The course appeared so on the edge that alot of the riders were uncomfortable pushing. I think that the format could due with an update because it feels like a non-event.