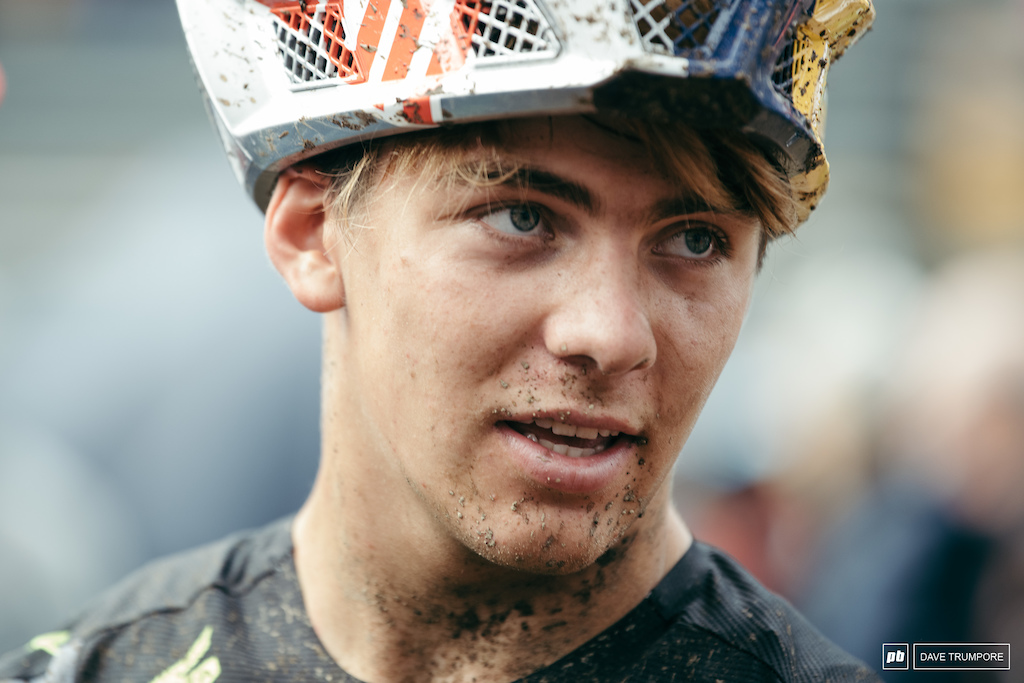 What is it like to race World Championships in Canada?

Honestly, it's a pretty special feeling. I've never had an opportunity like this before. Not many people get the chance to race World Champs in their home country. I feel like I'm at a good place now where I could definitely get a solid result at the race. I don't think there's much added pressure, but I definitely expect a lot from myself.

Do you think that the track plays to your strengths?

Yeah, absolutely. There are a few awkward corners that I seem to struggle with every year but I feel like this year I've actually got it mainly figured out and I just need to put a solid run together. The really fast open corners and the speed of the track really suit my style of riding. I think it just comes down to me letting it go and just finishing a run. 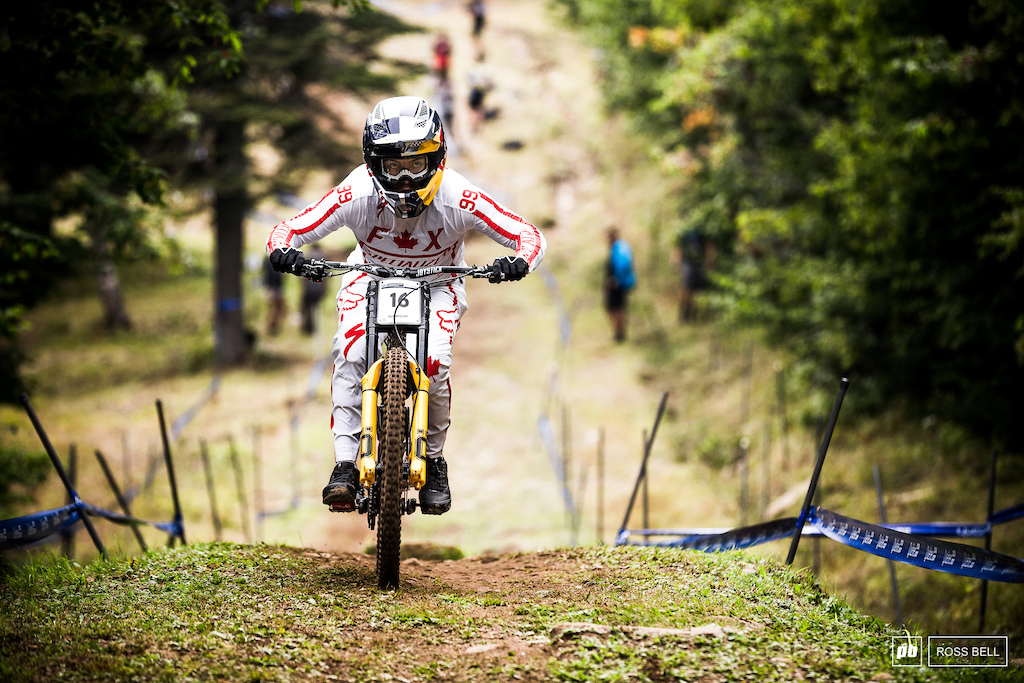 What's your favourite part of the course?

What about your least favourite?

There are two corners in the top woods where there are always a lot of big holes and it's just awkward. It's never good, every year. Just one of those sections, every course has one.

Do you think there's a place where the race will be won?

It's really hard to say because the races this year have been so close. I think down at the bottom. It's whoever can maintain a high level of intensity the whole way down because this track is so physical and long that if by the bottom you're tired and someone else has that extra little bit of energy, that's where you're going to lose the race. You could be head to head the whole way down and somebody just has that extra little bit and they'll get you. 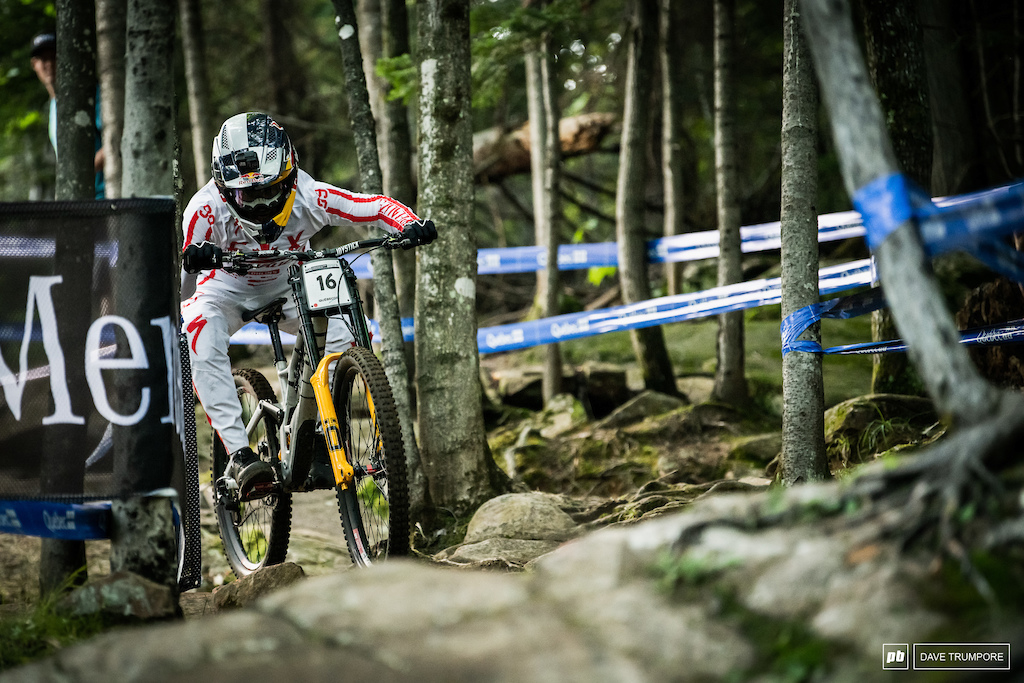 So in 2010, you weren't racing yet. So this is your first time racing World Championships at home?

Yeah, but this is my fourth time racing Mont-Sainte-Anne.

Did you ever watch Stevie Smith race here?

Actually when I was in first-year Junior he has just passed away and the year before he had an injured ankle when I came to watch my brother race here. So I never watched him race here but I watched both 2010 World Championships and 2013 when he won.

Do you feel more of a connection to him racing here than in other places?

Yeah for sure. Because we're in Canada and there's a section of course named after him and because it's a Canadian race and Stevie is a Canadian legend. He's the best downhill racer that we've ever seen come out of this country and there's always a feeling that you want to continue his legacy of doing well at Mont-Sainte-Anne.

You finished on the podium earlier this season, but you haven't quite found consistency. What do you think is the missing part of the puzzle?

I think the missing part of the puzzle is me. As much as that's pretty vague, I think it's more in my mind. I just need to settle down a little bit and be comfortable, at World Cups at least, with getting a top-15 finish rather than trying to go win every single time. But I feel like that mentality works for World Champs because it doesn't count for anything. There's no overall, there's no points, it's just one run and whoever is the fastest is World Champion. So I feel like I have a pretty good mindset for that, but we'll see come Sunday. 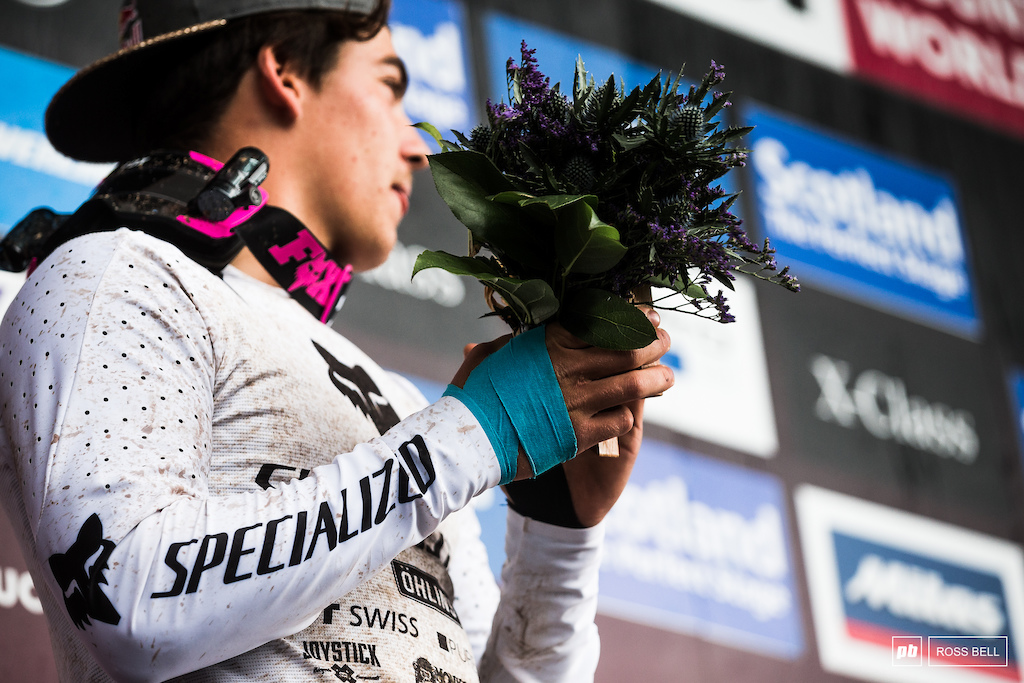 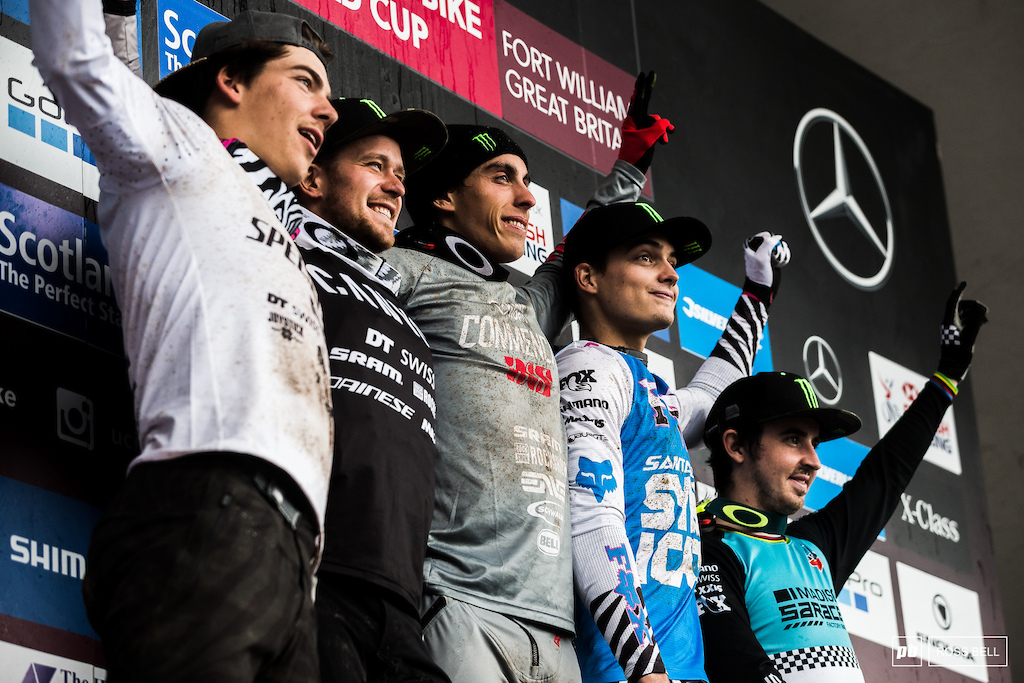 So you've been treating every World Cup like it's a World Championship?

I'd say I'm just treating every race like it's a race. It doesn't matter for anything. It's like, you know what? You should go get a good result this weekend. I'm like, 'maybe I should just slow it down a bit'. And I did that once at Val di Sole and I just felt like I could give so much more, like I should be able to be better than this, and then the next race I just did the same thing as usual and I pushed myself to hard. So I've got to find the middle ground. And then, of course, there's just settling into racing with the Elite guys.

Did you prepare differently for World Championships than you would for a World Cup?

I wouldn't say I prepared different mentally but because there's an extra day of practice, the entire race weekend plan is different than a regular World Cup. But for the most part, I do the same stuff to get my mind and body prepared.

Do you have any pre-race rituals?

I have a lucky pair of socks and a lucky pair of underwear. And then I'll always drink half a can of Red Bull. I ditched a bunch of other things at the start of this year because I kept crashing. I was like 'these are stupid, I don't want to do these things anymore.' I just kept the underwear and the socks and then I always drink the same amount of Red Bull every race.

What do you think about when you're heading up on the gondola to the start for a race run?

I wouldn't say I get really nervous, I'm actually quite calm before my race runs. There's not much going through my mind. Today I was watching YouTube videos with my friend Thomas. But I always get a little bit tired before races so I'll just sit there, maybe close my eyes, visualize the course. 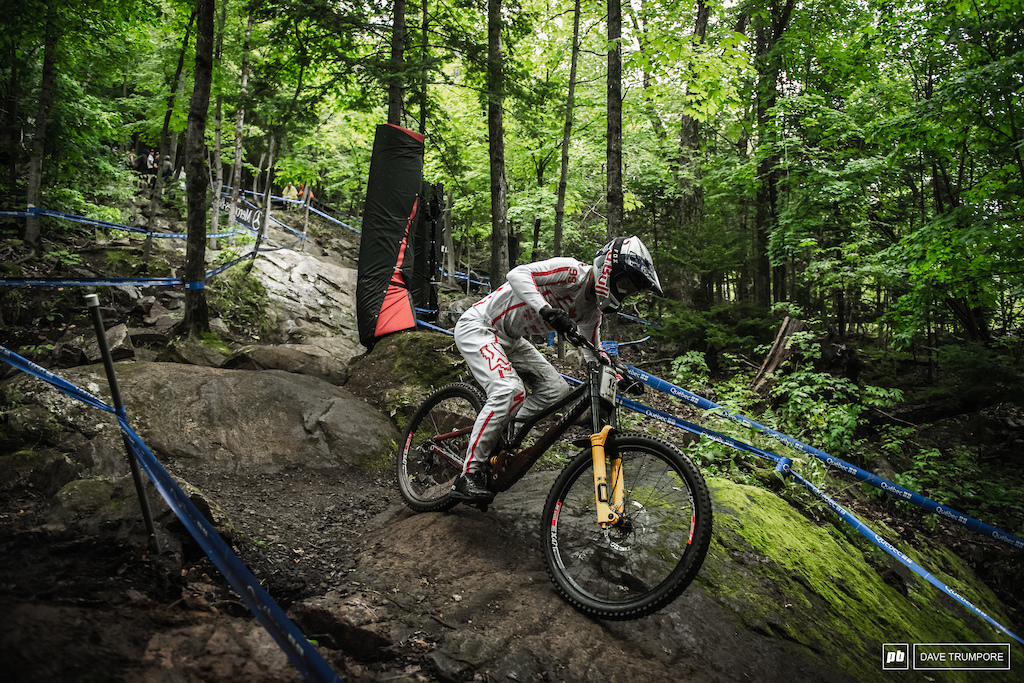 There were three Junior Men in the top 3 in Qualifications today, do you think that you play any part in helping grow the sport in Canada right now?

I'd say a lot of that would go to Stevie because all these kids are too close to my age for me to be inspiring them. I mean I may have proven that being from Canada you can do well in Juniors, but Stevie is definitely the one that everyone looks up because he proved that you can do it on the Elite stage and that it's possible to do that even if you're from Canada. 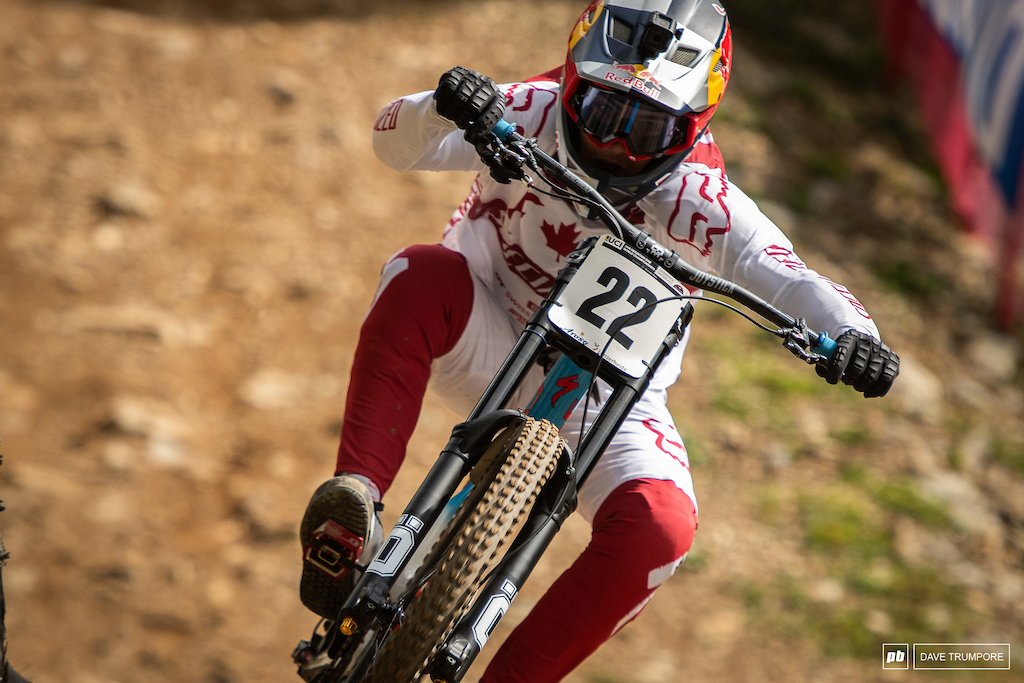 What's your goal for this weekend?

My goal, it's the same every weekend. I'd like to win. I'd be happy with anything in the top three but I'd really like to take a win here this weekend.

Ieazo (Aug 31, 2019 at 0:51)
I hope Finn can show us what he got on the World Championship stage. He is such a capable young rider but I felt he tries to hard in the World Cup races this year, trying to prove himself worthy almost. Come on lad we know your talented relax, enjoy it and it’ll come good.

opignonlibre (Aug 31, 2019 at 6:25)
Well in all kinds of racing we tend to say one of the most important thing is to beat your teammate because equal equipment, same surroundings and facilities, etc.

Not easy when your teammate is named Loïc Bruni and is at the top of his game.

crsimmons (Aug 31, 2019 at 8:42)
Finn is great, so don't get me wrong here. But why say "it's possible to do even if you're from Canada"? I get that in some countries you have a much smaller chance of becoming a DH star, but wouldn't Canada give you some of the best chances?

anotherstoneinthewoods (Aug 31, 2019 at 22:07)
Most of the international racing has been happening on th East Coast. So many of us from the west can't get out there. Many factors play into it for sure.

Bikerdude137 (Aug 22, 2020 at 21:23)
not necessarily, in Europe you can race in other countries since they're all packed together, the only other country for us without flying is US and only north west for us British Columbian's, also @waxman who said you can't train in the snow (it's terrifying but it works)

waxman (Sep 11, 2020 at 12:08)
@Bikerdude137: you can train in the snow, it's called skiing, it seems to have worked for Finn as he was a great alpine skier before concentrating on biking

nvmoondog (Aug 31, 2019 at 8:36)
Good luck Finn! Big group of us will be together at the GLC cheering you on. #finnforthewin #longlivechainsaw #SupportCanadianDhRacing

DDoc (Aug 31, 2019 at 16:13)
I know what your saying, and I agree that's really annoying to hear, but I doubt Finn talks like a teenage girl and I don't feel that style coming through in his written words. Your reading into it too much imo.

danlovesbikes (Sep 1, 2019 at 4:56)
@DDoc: dude, I'm not reading into anything, I literally use my ears to listen to him talking with rising intonation every time he opens his clacker.

mtnbkrmike (Aug 31, 2019 at 1:07)
Love the guy. Hate that he referred twice to drinking Red Bull in the same response. So contrived. Anyway, good luck Finn.

Jolinwood (Aug 31, 2019 at 2:10)
Ah I feel you but just filter it out, ads are everywhere, look at that podium picture from Fort William.. theres like 20 company logos etc, its a bit annoying but after all it pays for the whole thing

oldfaith (Aug 31, 2019 at 3:46)
He simply answered the question of pre run rituals. Makes sense to put some caffeine and fast burnable energy into the system before a race run. Allot of the pros do it and if I for one had achieved Red Bull sponsorship I too might remind myself of how far I’ve come as an athlete and that I have a job to do for everyone sponsoring and supporting me. If it puts him in the head space he wants to be in why do you have to feel he’s marketing a product so you buy it. Get over yourself Finn is not conspiring to milk your wallet.

I must remember to cancel my sponsorship with the loca cake company.

TobiasHandcock (Aug 31, 2019 at 5:07)
@oldfaith: Water is always a better option, caffeine isn't great for your brain, gets you too hyped up and ultimately anxious. Sebastian Leob ain't drinking no Red Bull before a race, even though he's sponsored by them.

BigAlfonz (Aug 31, 2019 at 5:29)
I hope this was just a sponsor plug and he doesn't actually drink that shit. It is horrid and would do more harm than good to his race run.

BenPea (Aug 31, 2019 at 8:21)
Nothing but love for RB's investment in and promotion of mountain biking (and for getting us through many drum and bass nights in the 90s). Hard to reconcile with its potential side effects, but then how much beer, etc. do we drink for post-ride recovery?

Bikerdude137 (Aug 22, 2020 at 21:18)
If he wasn't sponsored by redbull he probably would have said: i drink half of an energy drink, he might still even have said redbull if that's what he drinks...
Below threshold threads are hidden

YungSketchy (Aug 31, 2019 at 4:14)
Unrelated but has pinkbike tried to make the site more toxic? Let's see how controversial a comment is by seeing up and down votes
Post a Comment