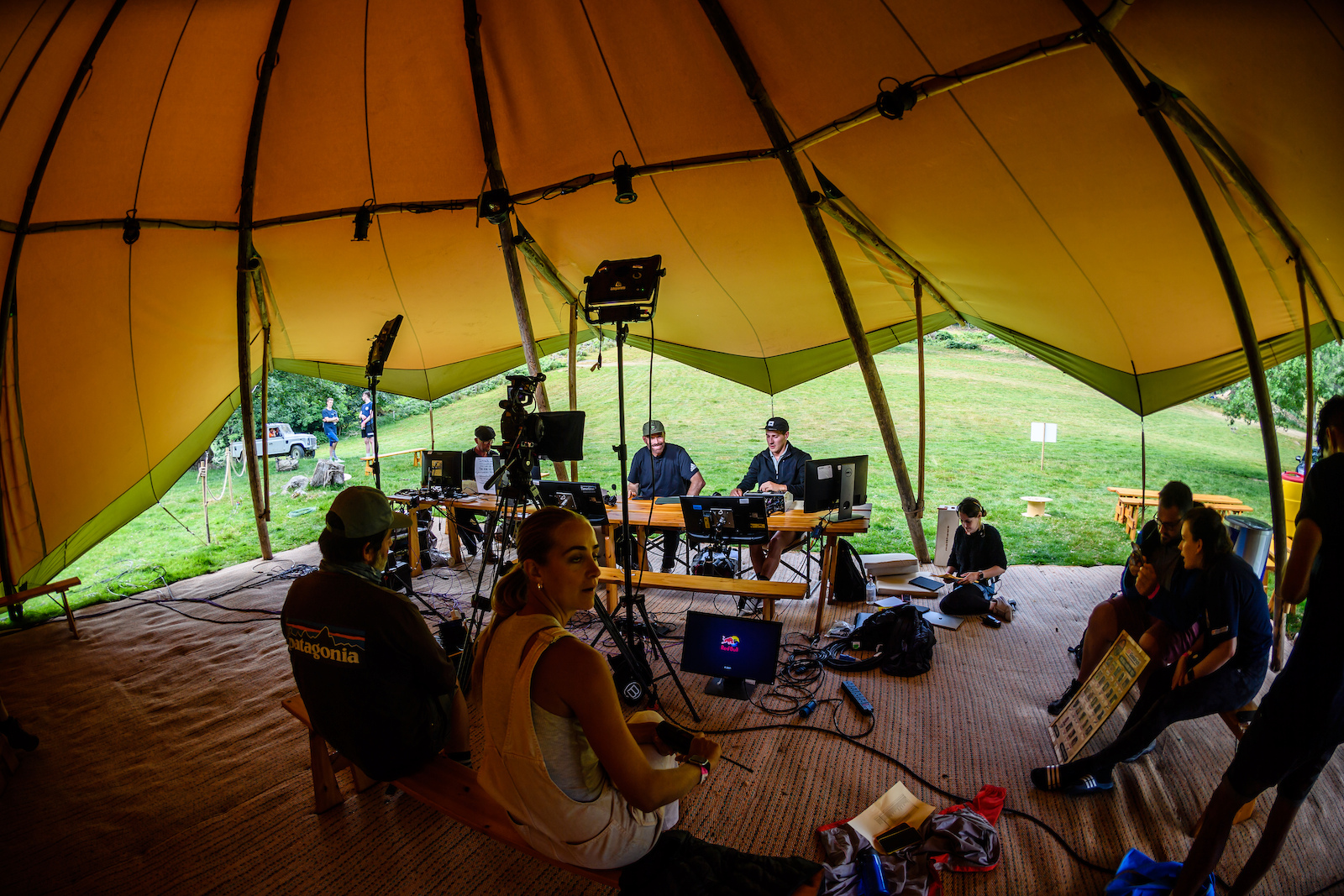 Interview
Rob Warner and Reece Wilson
at Red Bull Hardline, 2021
Words & Photography by Nick Bentley(Man Down Media)
This weekend Machynlleth, Wales was once again host to Red Bull Hardline bringing together the best mtb riders in the world to battle it out on this brutal Welsh track. We were lucky enough to get the opportunity to catch Rob Warner and Reece Wilson in the commentary booth for an interview after the practice day was disrupted by unideal, windy weather conditions.

So Rob how has today been for you?

Weather days are always a bit of a pain. It's more the uncertainty for the riders wondering if the wind is gonna drop and hanging around waiting, but this is how it is with a lot of these sports. I did Red Bull X Fighters for years and we had so many wind days. It’d be madness to send them down if they’re not happy and they’ve made 100% the right decision today and we’re going to have an amazing final tomorrow!

You have a new edition to your commentary team, Reece Wilson. How is he doing?

He's very good! Reece Wilson, World Champ . . . there's no one more current or credible. He's ridden Hardline twice before so he knows about this place as well as anyone. He's an amazing expert to have with me.

What would you say is the easiest bit of this track?

The uplift! But no seriously, I haven’t ridden it myself so can't speak from personal experience. I don’t think any of it is easy by any means, there’s barely any opportunity for these riders to chill. From what the riders tell me the only bit you get to relax on is the time in the air off the road gap.

What’s the hardest bit of the track?

All of it! Obviously the new big drop (14 metres!?) has been causing a lot of issues this week, it's new to everyone! A lot of the riders have been coming to Hardline since 2014 so know most of the features but something brand new like this is enough to put the fear in them, and rightly so! The landing area is so small you have to get it right first time.

What section do you think is going to win it for someone tomorrow?

I don’t think there's one section that will win it for someone. It's pace, from the very top to the very bottom, that will make the difference. Last time we were here in 2019, 15 seconds into the first split it was Bernard, Gee and Joe Smith that were at that point the fastest, and they were also the three riders across the line first. So that shows you, it's more about pace down this thing.

Who do you think will win?

Even though he’s had a big knock in practice, Bernard Kerr is in a league of his own. He looks very comfortable on the jumps, we know how quick he is between them and he’s won it twice before. Bernard, for me, is a clear favourite to win. 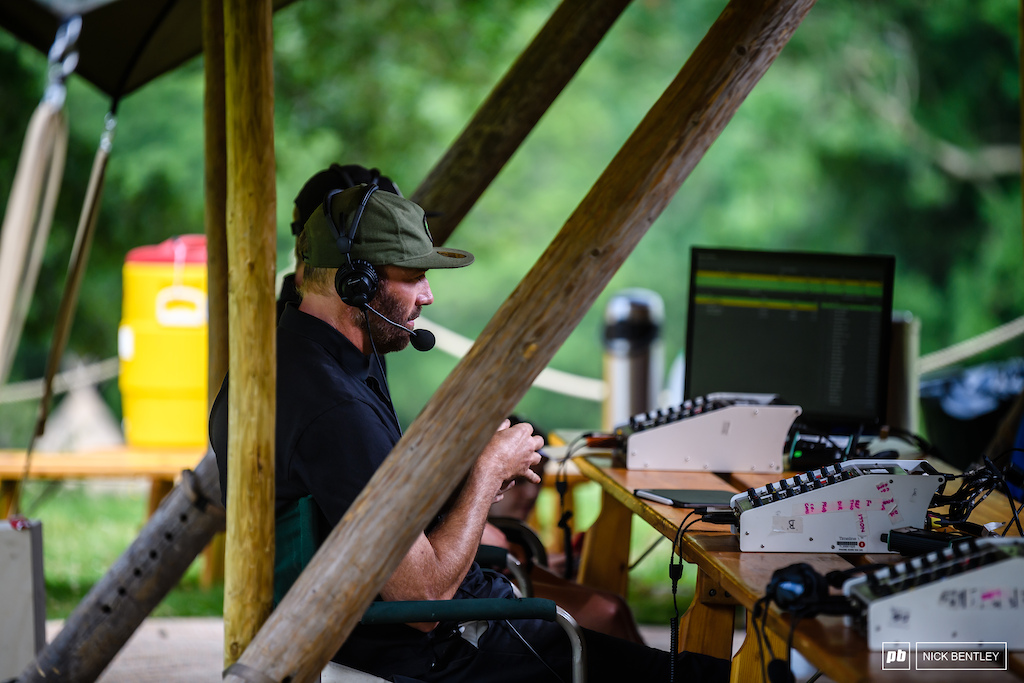 Robs new Co-host for the weekend Reece Wilson was up next.

Bit of a change for you today Reece. How are you finding doing commentary?

Yeah, I really have been thrown into the deep end here - turned up this week and they just handed me a mic, some scripts and took me up on the track. Had to kind of think on my feet but I'm pretty good at talking crap so I've managed quite well I think. I've learned a lot about how a production team works and how these shows are brought to the TV. It's been a hell of an experience.

Are you missing being on the bike this weekend?

You know what, there's probably been a grand total of about 10 seconds this week where I went ‘Oh, I’d actually like to ride’, mainly I’ve been quite happy with what I'm doing. It’s a tough track!

Where do you think is the easiest part of this track?

It's a brutal track but there is actually a combination of four or five corners, just before the technical section before the road gap, and they're actually really nice. I think they've got some GoPros on the ground for the live feed on those corners and they're actually mega fun to ride. They're good, tight but well built-up corners so that's the easiest part.

What’s the hardest bit of the track?

The toughest part has to be that massive step up to the even bigger step down. That thing's so blind! From the riders view, there's a slight pocket, just before the take-off, so it actually throws you up in the air, which (going off a drop) is the last thing you want. That's been spooking a lot of riders and now there's a side wind that thing's brutal. I wouldn’t want anything to do with that.

What section do you think is going to win it for someone tomorrow?

The winner is going to have to stay upright and avoid punctures, so I actually think it's very hard to tell who's going to win tomorrow. But, going on confidence and who's looking the best today, it has to be Bernard Kerr.


Thanks again to Rob and Reece for giving us their time for the interview.

OlSkoolJake (Jul 25, 2021 at 11:24)
Seriously..... It can't be stated enough.... Reece absolutely killed it doing commentary for this event. Definitely hope to see more of him in frontnof the camera and on the mic.

riddenagenda (Jul 26, 2021 at 17:29)
100% agree. He killed it. They were brilliant together. Reece, if you're reading, quit this DH world champ thing, it's going nowhere, commentary is where you belong.

MrBurger (Jul 25, 2021 at 22:37)
Was thinking the same, she must be thrilled about that photo. Oops.
And Reece got a bit fat "e" on his face. Odd considering he and Rob are the subject of the article.

Reece absolutely killed it this weekend. Downhillers don't always make the best commentators but he's definitely a keeper (when he's not riding).

ChrisLanaway (Jul 26, 2021 at 2:42)
Really cool having Reece on the commentary with Rob, having ridden Hardline and being an current WC racer. Some really interesting insight and commentary from him, really added to the event. A great addition alongside Rob!

suspended-flesh (Jul 26, 2021 at 15:40)
"New Edition" was a Boy-band that the author of this piece is clearly a fan of - Googling incessantly during work hours and teaching Grammarly.

"PB: You have a new edition to your commentary team, Reece Wilson. How is he doing?"