Enrico Guala
Superenduro Interview
Words & Photography by Samantha Saskia Dugon
As the final round of the 2018 Superenduro series is now over, we caught up with one of the founders of the series: Enrico Guala. Back in 2007, the series was in its planning stages with Enrico and Franco Monchiero (who later would step down from his role in 2015). Priero was one of the original testing grounds for the format of the series so it was very fitting that the last round of the 2018 series would return here again to conclude the decade of racing. We chat with Enrico about why Priero, reflect on the past 10 years and see what they’ve got in store for the future. 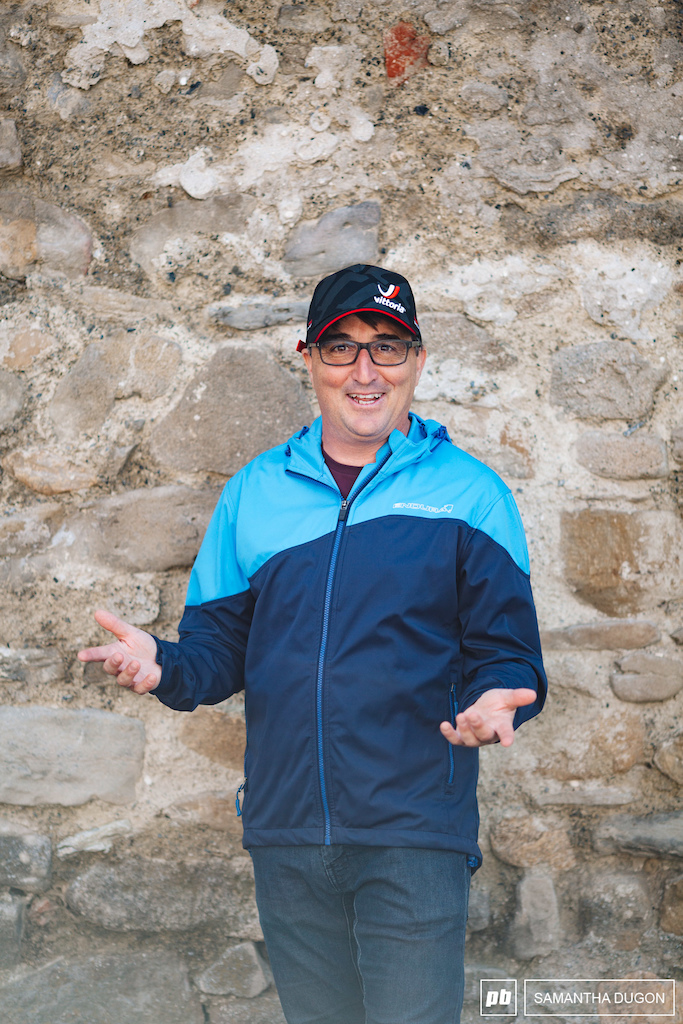 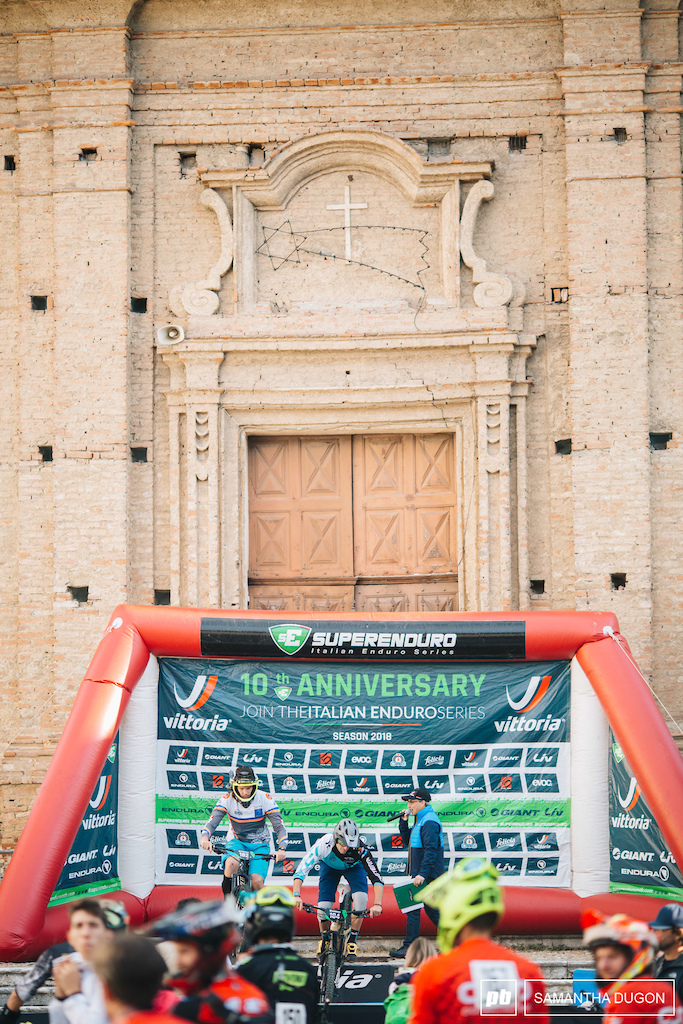 With a little town with under 500 inhabitants, why was Priero chosen to host the Superenduro?

“Priero actually represents one of the original spots and was chosen as Franco lived quite close and it is steeped in motorbike enduro culture. Next weekend there is a KTM race, so they have it in their blood and in their heritage.”

With the locals knowing and understanding the culture of motor enduro and how easily transferable skills from organising such an event were, it seemed like a no brainer to hold the Superenduro in Priero.

“It’s not just about the trails here, it’s about the (motor enduro) culture. Like the locals knowing what you need to do, knowing what a time check is, how to align and queue riders, how to give the start as that is something mtb enduro shares with motor enduro.” 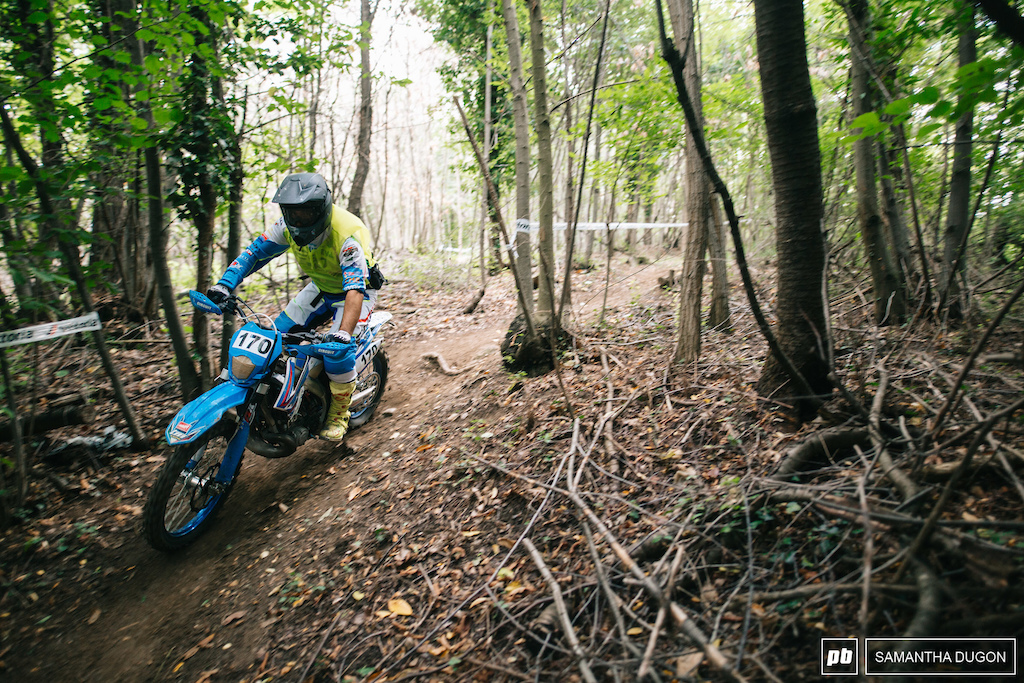 What was the main aim of the SE when you set out 10 years ago?

“One of the main aims for the series was for the sport to become a tour. In the beginning we were always inspired by the French but we have such different conditions or riding in Italy in comparison. They started on their lift assist trail networks like 30 years ago, we didn’t have this possibility. We had to figure out how to make an enduro work on a rally format.”

Relying on pedal power and trailer pulling uplifts instead, it can be said that the Superenduro revolutionised where a top tier race series could be held. The ability to do visit lesser known areas has created the magic and distinctive features of the Superenduro series. As an example, the 2018 series visited San Remo, Calestano, Canazei and Priero. 3 of these were smaller communities where you were fully immersed in the local culture where we began to learn the area like the back of your hand after many rallying uplift drives to the top of the mountain.

Enrico has taken this vision and experience to the table at the EWS where he is ¼ of the Enduro Mountain Bike Association which organises the renowned series. Enrico uses Tasmania as an example of where the EWS of which it first visited in 2017 and is now part of this years Asia-Pacific Continental enduro which as limited uplift capabilities, but as his experience with the Superenduro proves, it can still be a successful race without lifts, even if it is a bit more of a logistical struggle for the organisers.

“I feel like that was our addition to the sport of enduro, making it more compatible with more places in the world. If you only used lift assisted trails then you just can’t grow it, you’d be restricted to just doing it in the summertime, in the mountains. This event (Superenduro) has been super important to design the format. This also gives me the opportunity tell you that enduro is about diversity. I love places like La Thuile and Whistler. It’s so cool to have an event in Whistler, but at the same time you can have an event in a small village in Priero, that’s the beauty of enduro.”

Not only looking to provide diverse races and experiences for the riders, the Superenduro looks to give back and shine a light on understated riding locations and show the passion each little community has for their trails all over Italy.

“It’s also an important aim for enduro to help the small communities, being able to showcase their trail network. And the food is also important!” Enrico chuckles. “Of course there is pasta and pizza everywhere, but the way you cook it, the sauce, the chef behind it, it all makes for a unique experience. Enduro isn’t just about people racing, it’s about the whole experience, trails, local culture, local food, the buildings, the area, you know, all the things that surround an event.”

And immerse itself into local culture it does! The last round of the Superenduro in Priero was the perfect example of this, with the stage being situated on the steps of a church in the town square, and a local market festival dotted all the way along the high street, with locals experiencing both the trade, food and arts on offer as riders whizzed by.

10 years is a long time to stay motivated for, what ups and downs did you experience along the way?

One of the driving factors to embark on the mission to create the series came from Enrico and Francos experience from working in the cycling industry. With a growing number of bikes which neither fitted within the downhill or cross country category, the two felt the need for there to be a reason to use these new types of bikes and to showcase what they were capable of, both up and downhill.

“One of the reasons in the beginning was to be able to show people that there were events for these types of bikes! As Italians, we are usually caught by a racing thing. We have Ducatti and Ferrari, it’s in our blood, so a race is a good excuse to try new things and go discover new places. So with the series, we were then able to tell people “Hey! There’s a race for these types of bikes! That was a big drive for us and it really helped to get the support of the industry. The next thing that kept us really motivated was in 2011 when we kicked off the very first Enduro National Championship. We also focused on experimenting with formats which was a big part on Francos side. We ran events like Super Mountain, co-organised the enduro of the nation between Italy and France with French Enduro Series founder Fred Glo and tried a pursuit stage where the start list was in reverse order, Martin Maes was there and a bunch of those guys! Driving the sport of enduro led us to experiment with formats and that was a big part of the development.”

However, as the sport gained popularity and traction another driving factor for Enrico and Franco to get the ball rolling was the fear that others would jump on the enduro bandwagon, worrying that they may not understand and have a passion for the sport like they did.

“In the beginning with the Superenduro we didn’t want to give the right to anyone else to do the races, not because we were jealous or just wanted to own it, but we were super afraid that people that wanted to jump on enduro wouldn’t get it right. When you’re building something that you’re passionate about you don’t want to see something going wrong. We were super afraid, an enduro race is f*cking tough thing to organise, I promise that. I’ve been organising international XC before and downhill, and the dynamics (of enduro) are completely different. We were afraid that people would jump on it just because it was trendy without understanding exactly what was behind it.”

With so much passion and energy poured into the series it became all too much with a case of burnout hitting the team as they took a break in 2015. They came back in 2016, fresh, rejuvenated and motivated for the years ahead.

“At the time I think we also lost a bit of motivation and that's what led to the 2015 stop, we gave a lot of energy. When I look back at the pictures, and to the whole material we produced in the first like 7-8 years, I was like, Jesus! When I look at every event, every venue, every picture, I see all the energy that went into producing it, so we were tired. I think it's normal, we're still humans, we're not superheros. And you know 2015 marked a big lack in organisation, communication, reason, meaning of the whole enduro scene.”

What does the future of Superenduro hold?

“The aim for the future to me is to keep promoting the sport and developing the sport. The next step with probably be the next step of rules you know, there's all this talk of practice and is becoming too much like downhill, so we need to work on that, and on the other side to be able, to keep showing and showcasing trail networks. That's what I would call the mission of my life, put people on bikes, thanks to nice trails. That is what I WANT to do and I’ve always been doing, in the Superenduro, and in my professional life. To be able to bring you and your audience, you know the Pinkbike readers to another new venue, a little village, or a lift assist place, or something that was not on the map. With the power that we have of communication and our riders helping spread the word, we can show more trails to the mountain bike community, and that's what keeps us, the whole group very very motivated for the future. I can't wait to tell you what's going on for next year!” 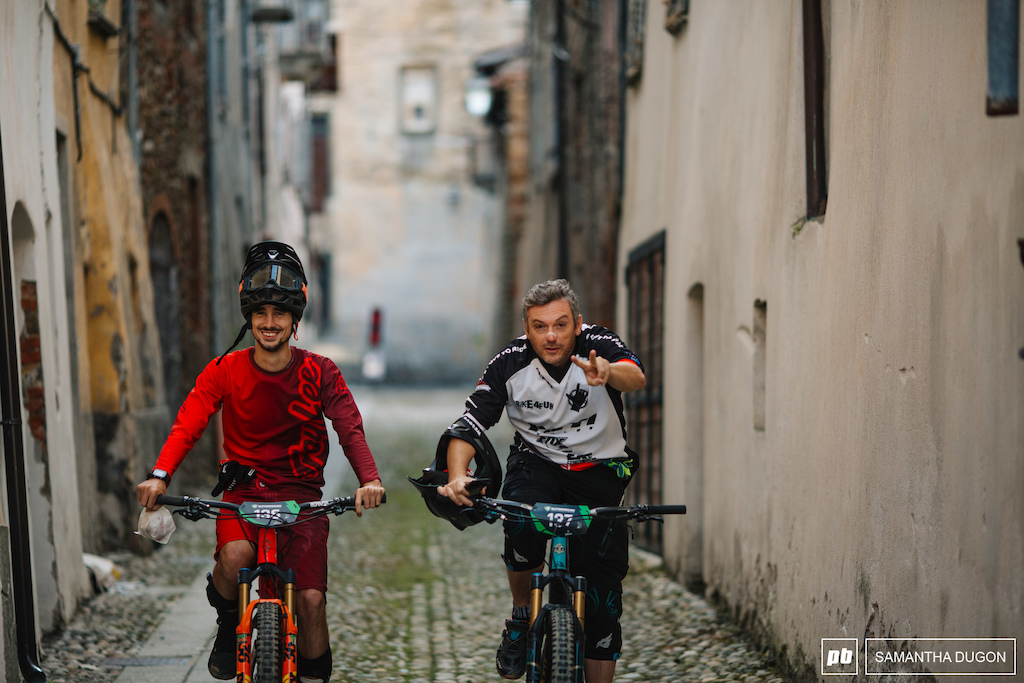 EnduroManiac (Sep 7, 2018 at 11:36)
I love those italian races, be it SE or EWS. It’ Always something so special. Now I don’t want to take all those efforts from him, but some of his inventions (rally format or pursuit in reverse order) have been existing before. Ok, it wasn’t at a national level, but many races like that existed already in south of France.
Anyway, keep doing a great job, we love it!

brazilian-monkey (Sep 6, 2018 at 9:34)
Enrico please can you organize a multi stage race at Italy - pleaseeeeee

RedRedRe (Sep 6, 2018 at 12:08)
This is where nowdays enduro and ews come from. It would be cool to see an enduro marathon, where athletes are timed in the uphills as well... then i guess the xc guys will move over and win everything.