Today the Anthill Films crew dropped a little hint that they’ve been working on a new film - “Return to Earth”. We asked Anthill directors Darcy Wittenburg, Darren McCullough and Colin Jones along with producer Ian Dunn a few questions about their new project. Here’s what they had to say.

What's the inspiration for the film?

Everything we do always comes back to the simple idea of trying to inspire people to just get out and ride their bikes. That's always been the end goal. But there are different ideas behind the films that guide how we try to make that happen. For this film, we were influenced by the idea of digital distraction. There's this whole "attention economy" that is constantly trying to create new ways to get us spending as much time staring into our screens and phones as possible. As artists who make digital content designed to get people out on their bikes, we want to be part of a movement that is pushing back against that i.e. if we're asking for your attention, we better make sure that it's time well spent. For Return to Earth, we want to shine a light on all the good things that happen when you get out on your bike and really immerse yourself in the experience. It's about that simple act of living completely in the moment. We feel like this is something that mountain bikers naturally understand; that feeling of being totally in the moment is something that happens every time you go out on a ride. We're hoping this film project can be a tool to help spread that message a bit. 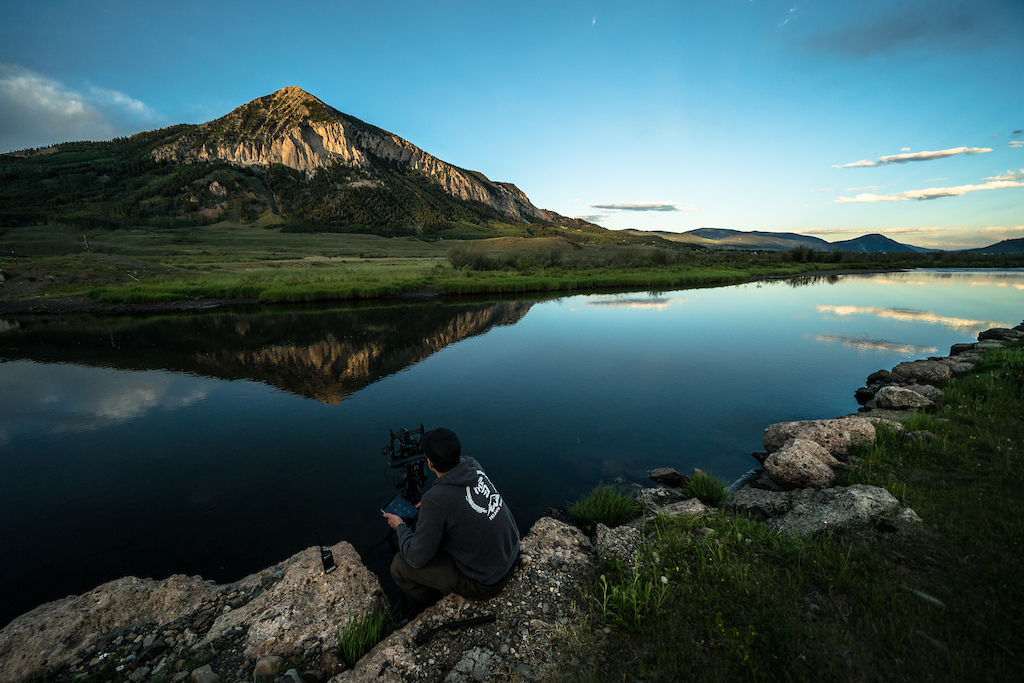 Who are the key riders in the film and why were they selected?

We're super excited about the riders in the film. It's a really amazing and diverse group, from established pros that we've worked with for years like Rheeder, Brandon, R-Dogg and Vanderham to young shredders like Jackson Goldstone and Jakob and Dane Jewett. We're also pumped to be working with Casey Brown, Matt Hunter and Joey Schusler on a new adventure segment. And we've also been able to shoot with some local riders we've met up with while filming at a few locations around the world. There's no real set formula for the riders we work with; it's really based on putting a team together that we are excited to collaborate with to bring these ideas to life. 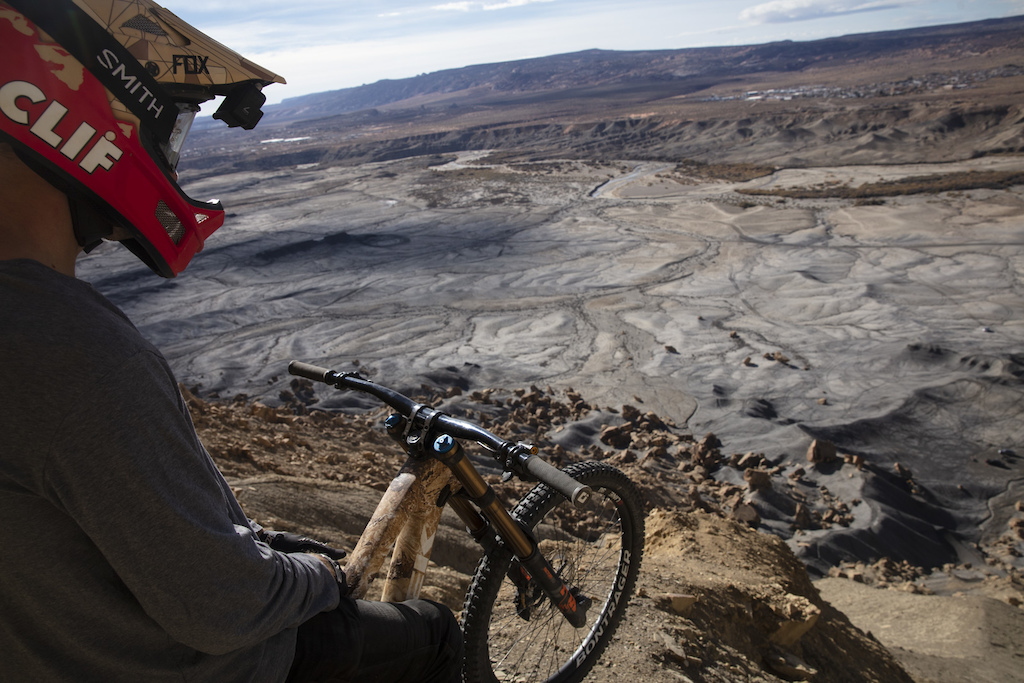 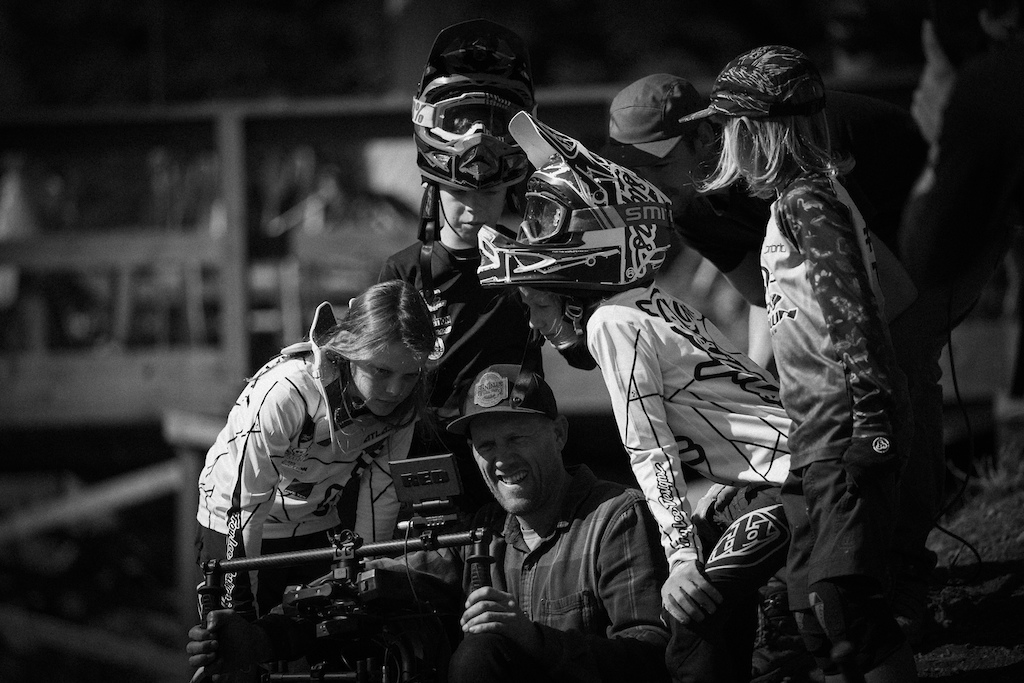 What are the key locations in the film and how were they selected?

This is the most diverse list of locations we've ever shot in. So far we've been to Whistler, Lenzerheide, Bromont (Quebec), Utah, Colorado, Wales and Oahu in Hawaii. We're still planning to shoot in South America later this winter and a bit more in Oregon and our hometown in Squamish BC before we wrap. 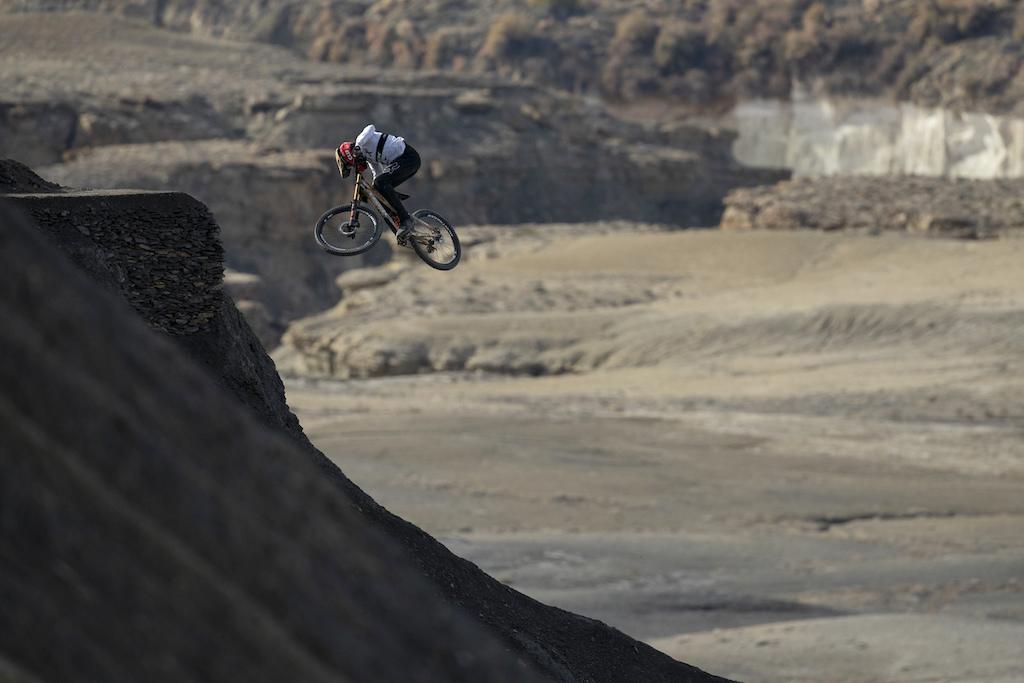 How many days have you filmed for this project?

A lot! We started in the spring of 2018 and will be working non-stop all winter. At the end of the day, these projects typically take two years to make. One year of pre-production and planning to get everything dialed and ready to go and then another year of production and post-production to make it all a reality. We have a core crew of at least eight people plus riders on almost every shoot. And locals in every location who have been amazing at welcoming us in and helping on the ground. Then there all the incredible partners, like Shimano and Trek, who are supporting the project. Without them, this film would never be possible. When you add it all up it will have been thousands of days that have gone into the project. 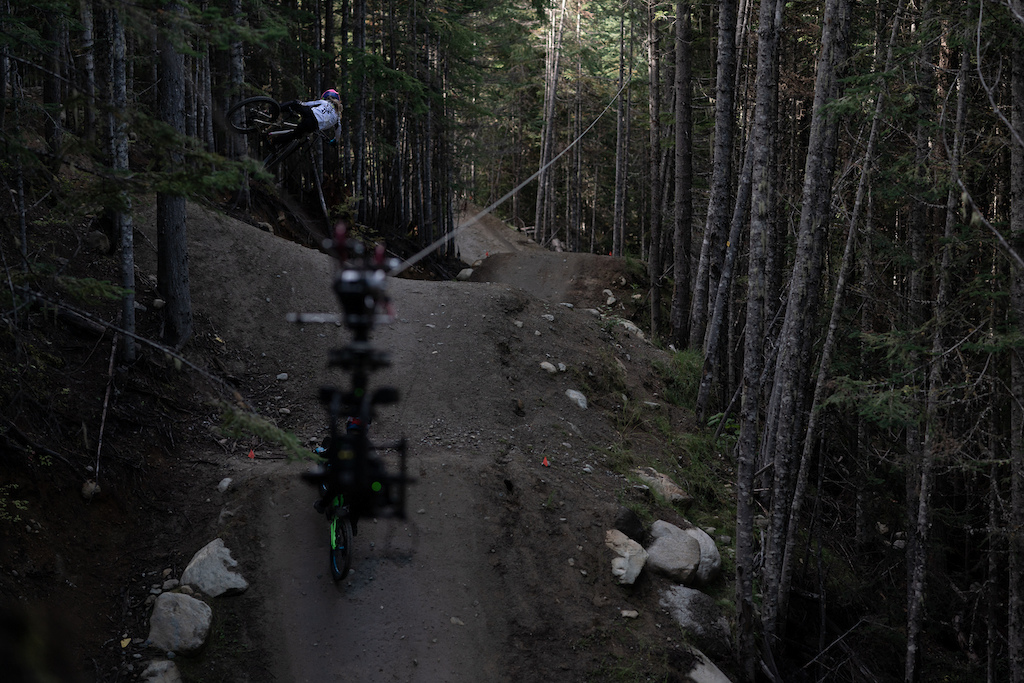 What has the hardest part been about making the film so far?

Really it's the logistics of trying to make a big project like this happen. There are a lot of moving parts that we don't always have control of - be it weather conditions, rider injuries, land access... Luckily this is something that we've been doing for years now so when we hit bumps on the road they don't really knock us off course.

How long will the final film be and why was that length chosen?

It will be around 45 minutes. It's still an action sport film so we want to have something that's really watchable. We've found over the years that's a good length to really get into the experience of the film, while still being something that our audience enjoys watching more than once.

What part are you most excited to show on the big screen?

Ahhh that's a hard question. Every segment has a different element that we're excited to share. The segment we're working on now in Hawaii is the most ambitious thing we've ever done with many of the riders from the film being all together. It's going to be the climax that ends the movie. But we never really know exactly what parts will get the best response until we are all sitting in a theatre for the world premiere.

How will the film compare to unReal?

In many ways, we see the film as the other side of the coin when compared to unReal. unReal was intentionally created for the attention economy that Return to Earth is a response to. In unReal we created these over-the-top scenes that were specifically designed to grab your attention - it was essentially a fantasy mountain bike film. For Return to Earth, everything is totally real and has a much simpler, more natural feeling. It will be more of a return to our roots with the vibe and style of The Collective trilogy. That said, we still want to impress the audience with the amazing beauty of the environments that we all get to ride in and the skill and athleticism of the incredible riders we have the privilege to work with.

Are you using any unique camera equipment that you haven't before?

Camera technology and the ways you can mount and move those cameras is changing at an incredible rate. We're constantly trying to look for ways to use that technology so that it translates into capturing what it actually feels like to ride your bike and be immersed in these spaces. So yeah, there are some cool technologies and systems we're using for the film. But it's not really about the technology it's about the way it can make you feel. We're super lucky to have partners like Sony and Freefly Systems who give us some amazing tools to work with to try and do that. 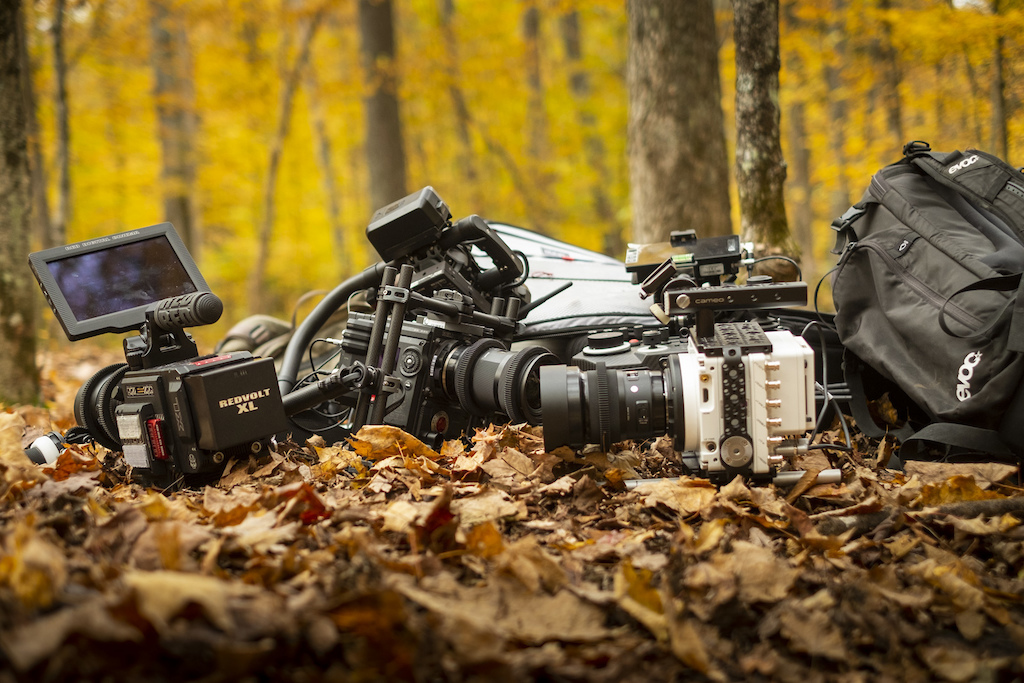 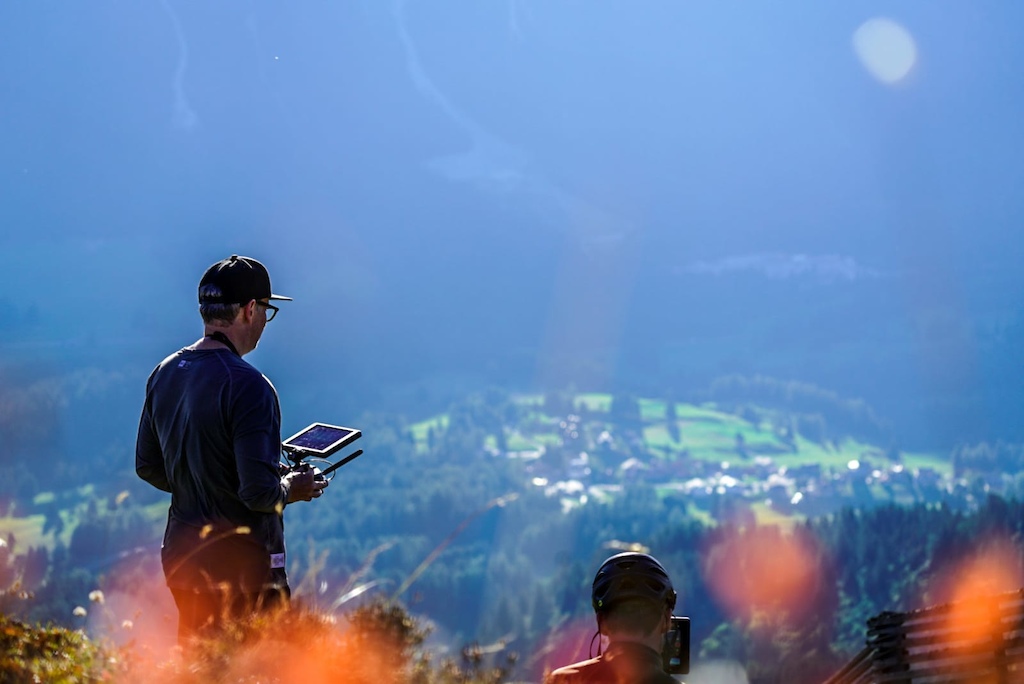 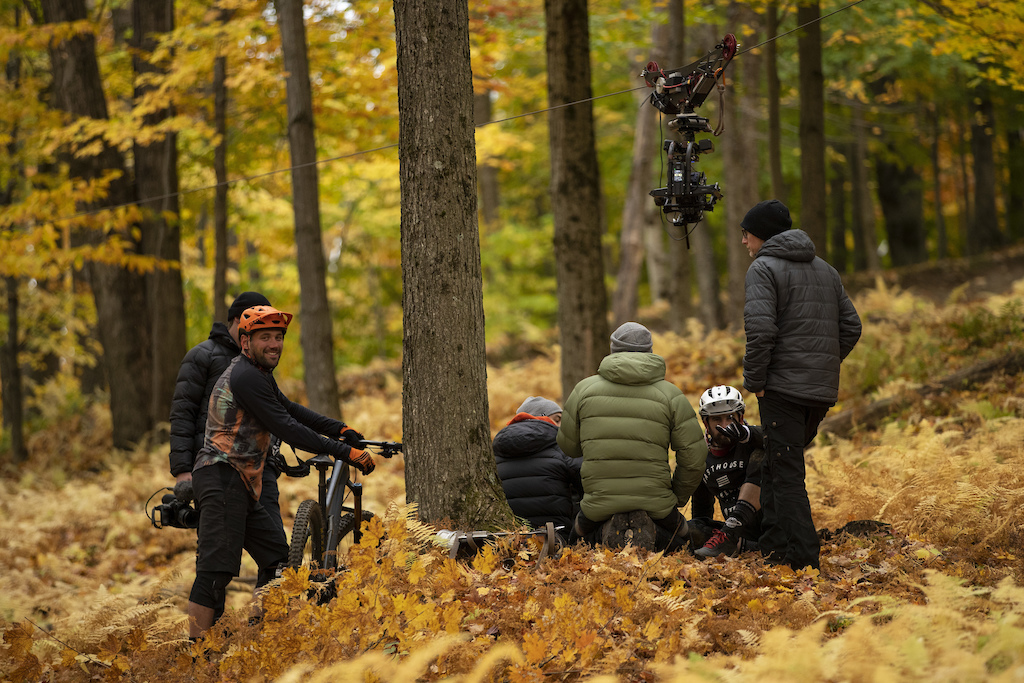 Interested in hosting a Return to Earth premiere this summer? 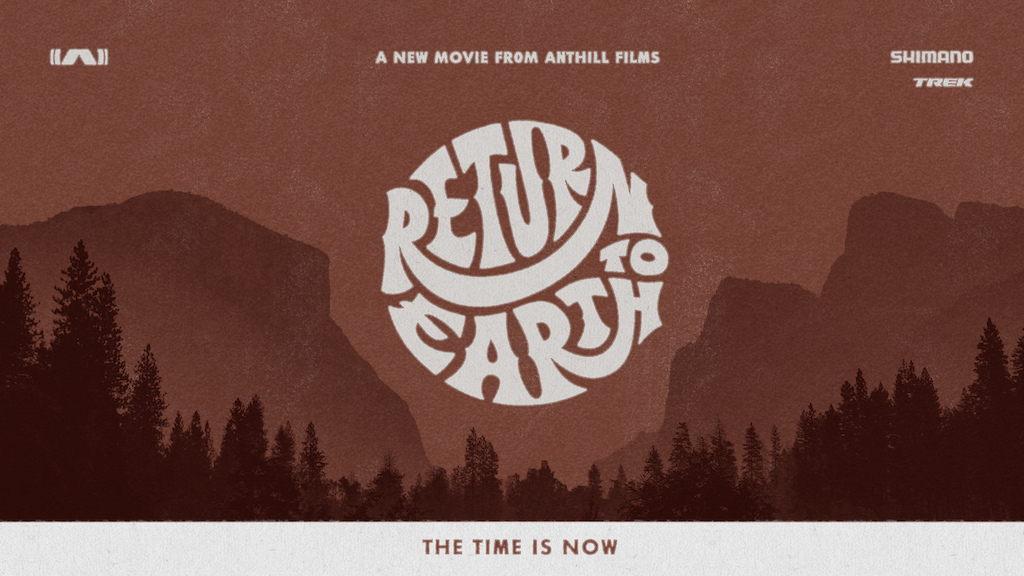 LTP-Sports (Jan 8, 2019 at 9:09)
Shout out to the builders (and landowners!) who make it possible to film amazing videos in such diverse locations!

How about a Seasons 2?

Would be a great follow up to see what the riders are up to and what has happened over the previous 10 years. And even with the loss of our beloved Chainsaw, you could still honour him and one of the most iconic sections of any MTB movie (Stevie racing his mum down the hill).

You could also ask Peaty to grow back his off-season beard!

panchocampbell (Jan 9, 2019 at 5:37)
@anthill: we love your creations, they have kept us inspired for years now, we live in this island where we have this lodge (Isla Bruja Lodge), right next to the trails, so please let us know if you're ever in Chile, so we can share some trail life!!!!!

vinay (Jan 8, 2019 at 12:14)
Love to see a huge company like Shimano being excited about the same stuff as we are. And I love you for not only making top level stuff for pro athletes, but also the mid level components for my own mtb, the workhorse Nexus group that manages to perform under immense loads every day with minimum maintenance (whereas the competitors spectro S7 hub really was a handful) all the way down to the entry level group on my kids' mtb that still performs perfectly fine. Smashing pedals in the cold, pouring rain after a long day at work still gets me this unstoppable stupid grin on my face. Thanks for making this possible.

Would love to see this one released on dvd or blu-ray. Call me old fashioned but somehow having to go through computer menus to start music or a movie affects the experience. Pop in a disc, press play and it goes would be ideal. So yeah, I'm indeed still buying my music on cd and vinyl (and luckily everything I'm interested in in still being released as such) but unfortunately in mountainbike movies, they moved away from this. Considering this is kind of the theme of this project, yeah I'd love to see it being released on physical media.

EnduroriderPL (Jan 8, 2019 at 10:25)
For me Anthill are one of the best film crews of all times. I really love their movies and just can't waint to see another one. I wish I have acess to some theatre to do premiere in it...

mentalhead (Jan 8, 2019 at 13:10)
"It will be more of a return to our roots with the vibe and style of The Collective trilogy"
- Couldn't be happier and more excited about. Why is summer so far away?

MikeyMT (Jan 8, 2019 at 10:09)
Can't wait. Your films have inspired so many of us for so many years...I'm sure this will be an instant classic that i'll watch way too many times causing eye rolls from the wife

WhistlerMountainBikePark Plus (Jan 8, 2019 at 16:46)
Can't wait to see the final product. It was awesome to work with the Anthill team once again!

nikifor88 (Jan 8, 2019 at 9:28)
this earth sound effects were strangely similar to how i remember sex sounded but it was so long ago i can be wrong

This still looks sick though!!!! Woooooo

SupraKZ (Jan 8, 2019 at 10:03)
Just reading the names of the riders in this is making me dizzy. I can't wait to see this. Hopefully someone will host a viewing event in Sofia.

Kimura (Jan 8, 2019 at 12:57)
What is the name of the effect for the green moss growing on the rock? Seen similar effects in life cycles and i've always been wondering

thenotoriousmic (Jan 10, 2019 at 5:02)
They’l never top seasons or roam but I’ll definitely purchase any attempt they make. Looking forward to this already.

reindeln (Jan 9, 2019 at 14:04)
That whole teaser video was just one long string of ASMR triggers. I'd pay top dollar for a feature length version of that.