Have you ever wondered what it feels like to wash down two dozen Timbits with six litres of sugar free Monster Energy? Do you fantasize about lying to your boss that you're going for a mountain bike ride when you're really going for a gravel ride?

Legally I'm not allowed to give you all sketchy Mini Coopers, but I can give you the Totally Realistic Mike Levy Riding Experience™ with the Grim Donut video game. 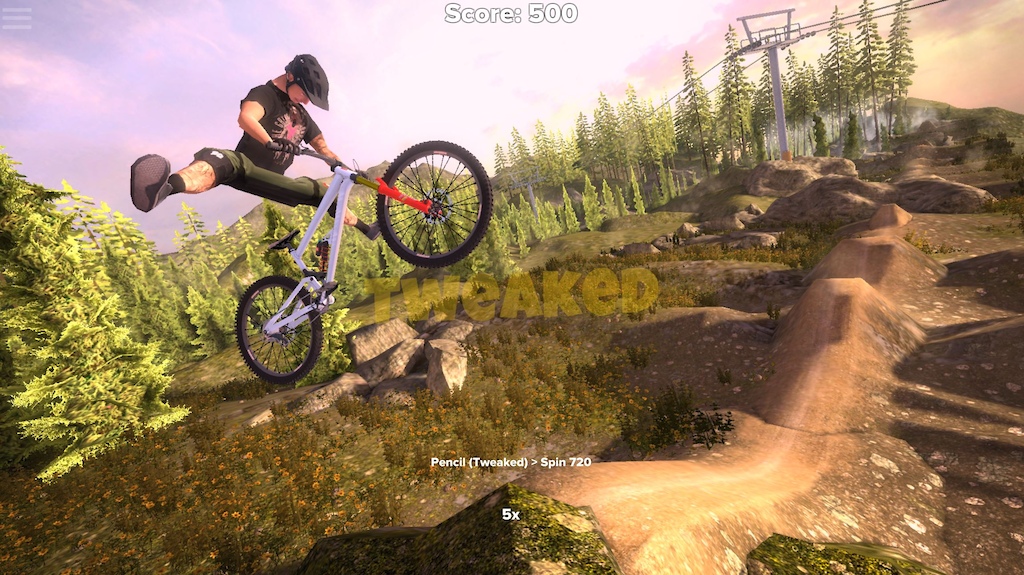 When we started chatting with ASBO about including the Grim Donut in their game Shred! 2, the discussion inevitably escalated into the idea of making a standalone Grim Donut game. In the future I think we definitely need to add a UFO level and a hollow earth level. And maybe some shopping cart bike sounds.

It's been a wild year, and we're glad to have you along for the ride. Merry Christmas and happy holidays from all of us at Pinkbike. All the best in the New Year!
—Brian & the Pinkbike team


Huge thanks to Alex and the crew at ASBO for making this happen. You can learn more about the development of Shred! 2 here. Their main agenda next year will be developing Shred! 3. It’s currently in a very early stage prototype and will feature a fully explorable open 3D world. Check out some super early footage here.

Both of ASBO's games are currently on sale on Steam.

TacosMcGee (Dec 23, 2021 at 7:37)
@brianpark: you really need to allow embedded images in comments just for this

ripridesbikes (Dec 23, 2021 at 6:40)
It is currently rain season in my part of Northern California which means no (outdoor) riding for a while. I am 100% going to download this game and play the hell out of it until I can go back outside. Thanks Brian!

stiingya (Dec 23, 2021 at 6:54)
It's funny how some places have a no rain riding thing and then obviously places like the UK and BC are like if you didn't ride in the rain when would you ride?

I know someone will chime in about how their dirt is different and I'm sure there is a good bit of truth to that. But it is funny how different outlooks can be on doing the same thing...

hgardner (Dec 23, 2021 at 7:00)
@stiingya: It's more about the trails, riding them wet causes more maintenance. If you live somewhere that only has 20 wet days a year, it's east to stay off them, here in the UK when the trails are wet for 100+ days a year it makes sense to get out there and just put more maintenance into the trails.

artistformlyknowasdan (Dec 23, 2021 at 7:02)
@stiingya: Chiming In - I use to live in western NY, rode in the rain all the time no issues. I've been in SW Colorado for 8 yrs now, 90% of the time def don't want to ride in the rain, it'll like flinging wet concrete all over yourself. The way the dirt sticks and turns to mud is much different with drier desert climates

ak-77 (Dec 23, 2021 at 7:56)
@stiingya: having lived in NorCal for a while but mostly in The Netherlands I would say
* Outlook is a big part of it. I remember a road ride group that had as a policy that rides were canceled if the prediction said a >30% chance of rain. On pavement! Back here that would cancel most rides even in summer.
* Type of dirt matters a lot too. I took my MTB & Dutch attitude to a Bay Area regional park in wet conditions. The dirt had a pottery clay like texture that was horrible. Even the sidewalls of my tires were covered in a layer of clay that was limited only by the fork and chainstay width.

Time to hit the slopes by friend!! 120+ inches and counting

ripridesbikes (Dec 23, 2021 at 10:45)
@ak-77: Yep, I live in the East Bay area and that sticky peanut butter mud is exactly why I don't ride in the wet. We have one or two places I can drive to that drain well but it's best to give those spots a day or two after a heavy rain to avoid damaging the trails.
I will ride on the road in the rain no problem though.

ripridesbikes (Dec 23, 2021 at 10:52)
@stiingya: High clay content in the soil mixed with water makes for a miserable experience walking, biking or digging.
There's a magical two week period after the rain and before the summer when the moisture level of the clay is just right for digging, but if you go too early the mud will stick to everything in thick globs, go too late and the dirt will have dried to a concrete like hardness.

stiingya (Dec 23, 2021 at 11:33)
@hgardner: Agree it's about trail conditions! Lots of times I have to drive someplace else because it's too muddy, etc. And have had to just ride on the gravel 4x4 road AND have given up and gone home!

Just seems like some people have a rain off switch?

@ripridesbikes We have clay I wouldn't ride in wet either. Waiting a few days after a huge storm or driving where the trails drain = much better than not riding all winter...

@ElDebarge to the beat of the rhythm of the night...

8088yl0n (Dec 27, 2021 at 16:31)
@stiingya: ended up in South east europe, this damn wood... Some red ground dirt sticking like glue, damaged my rear mech, scratched the bike all over rear, couldn't ride at all, went insane over it. Nothing like the dirt where I'm from, and it rains much more often here, but it's nothing to worry about.

i-like-toytles (Dec 23, 2021 at 7:19)
Okay now I feel bad for ever thinking any negative thoughts about Outside acquiring PB. I see now what the end goal was and it is pure of heart and wholesome.

lostlunchbox (Dec 23, 2021 at 21:00)
Do you really think outside developed this game in the 20 days since they officially took over pb? This was probably in the works for some time.

pnwgnarnivore (Dec 23, 2021 at 8:54)
@brianpark I think there might need to be a contest for the best Levy crash screenshots? I mean the Pinkers have been wanting to abuse him for a long time, and now they can showcase it.

brianpark Mod (Dec 23, 2021 at 9:29)
This is a good idea. I want to see some video clips of people's best/worst lines. Maybe tag #grimdonutgame on IG and we'll try to find some of our favourites.

wslee (Dec 23, 2021 at 7:33)
I liked the visuals and the feel of the game, especially for pumping the track to go fast. However, I’m not too sure how accurate the area where one releases the pumping action on the upslope is haha

DPGriffin (Dec 23, 2021 at 20:26)
Honestly, especially when going for the time challenges in the last few levels, the thrill of chaining together transition after transition was nuts. Way more fun than I expected it to be.

DPGriffin (Dec 23, 2021 at 20:25)
@prmtb04: Don't trust the green lines for when to pump. Pump the downslopes, release on the upslopes, and wait longer than they tell you to in the air before pumping to land early.

asbointeractive (Dec 24, 2021 at 2:17)
Make sure you squash that double before the big gap, land right on the top of the landing!

veero (Dec 24, 2021 at 5:42)
@DPGriffin: Legend, blindly following the pump instructions you've got no chance. Third try pumping properly and landed on the downslope of the massive gap!

Jshemuel (Dec 23, 2021 at 8:24)
Anyone else having the issue that the game just loads forever without actually letting you play?

usedbikestuff (Dec 23, 2021 at 11:26)
Can he actually do any of those tricks? If homie has to shatter his ankles with hunks to flat. A video of trick attempts Is surely justified

brianpark Mod (Dec 24, 2021 at 11:18)
@mikelevy once challenged me to an arm wrestle about ~6 months after I had open shoulder surgery and 3 months out of a brace. I will never let him forget how badly I destroyed him.

Coldspringer (Dec 25, 2021 at 16:28)
It doesn't matter how much they spent on development this was an incredible idea

DPGriffin (Dec 25, 2021 at 10:06)
You have to really pump and squash all of the jumps before it. Use the pump button to try to land as high and early as you can on the landings, and hold pump until the bottom of the takeoffs. I found it easier to not worry about tricks on the earlier jumps until I got the hang of how much speed I needed for the northshore.

prmtb04 (Dec 25, 2021 at 19:51)
@DPGriffin: I did the entire track and cleared everything. and holy smokes is it hard to maintain proper speed and have the perfect line and pump perfectly..thanks for the tips!

betsie (Dec 24, 2021 at 0:39)
Error loading Asset, it crashed! Uninstalled. Off trail building instead.
Below threshold threads are hidden

Shouldn't this be behind the paywall?

ididntknowhatomakemyusername (Dec 23, 2021 at 16:34)
be thankful its not and dont give them any ideas