On Sunday, Joe Breeden won the Crankworx MT7 Psychosis downhill race. The track is 12 minutes long, but it's not only the length that makes it so brutal. Steep, loose chutes, technical features aplenty, and even a hike-a-bike, mean this event is as brutal as its reputation suggests.

The bike Joe won on, an NS Fuzz, is a mixed-wheel setup that has 200mm of travel front and back. Joe is 6' 2" and rides a size large frame. 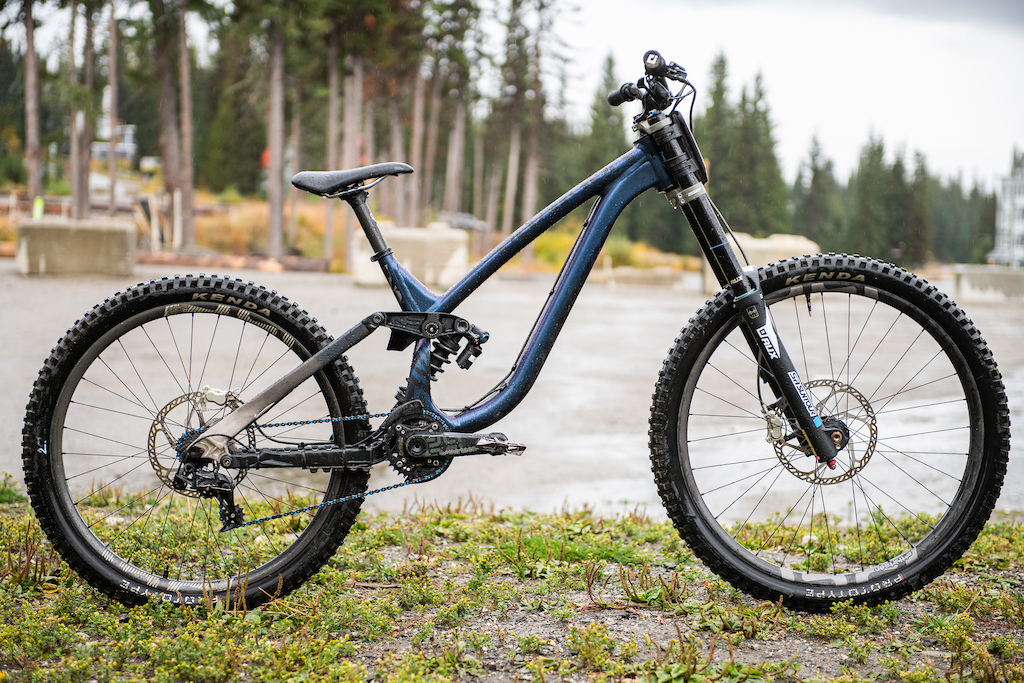 The bike uses adjustable headset cups to fine-tune the reach. Joe has experimented with the middle 476mm setting but now prefers the 480mm setting, especially on the rough and fast race courses. Although Joe is above average height, and tall enough for many to presume he would be riding a full-29" setup, he feels more comfortable with a smaller wheel in the back. He says this is down to riding style more than stature.

The team uses a 29" front triangle with the swingarm and stays of a 27.5" wheel bike in a bid to not only incorporate a smaller wheel but also preserve geometry.

Joe ran the same spring rate in the rear as he normally would but lowered the fork pressure from 83 psi in Snowshoe to 78 psi at Psychosis. He did this for comfort on the long course, which is around three times the length of most downhill World Cups. 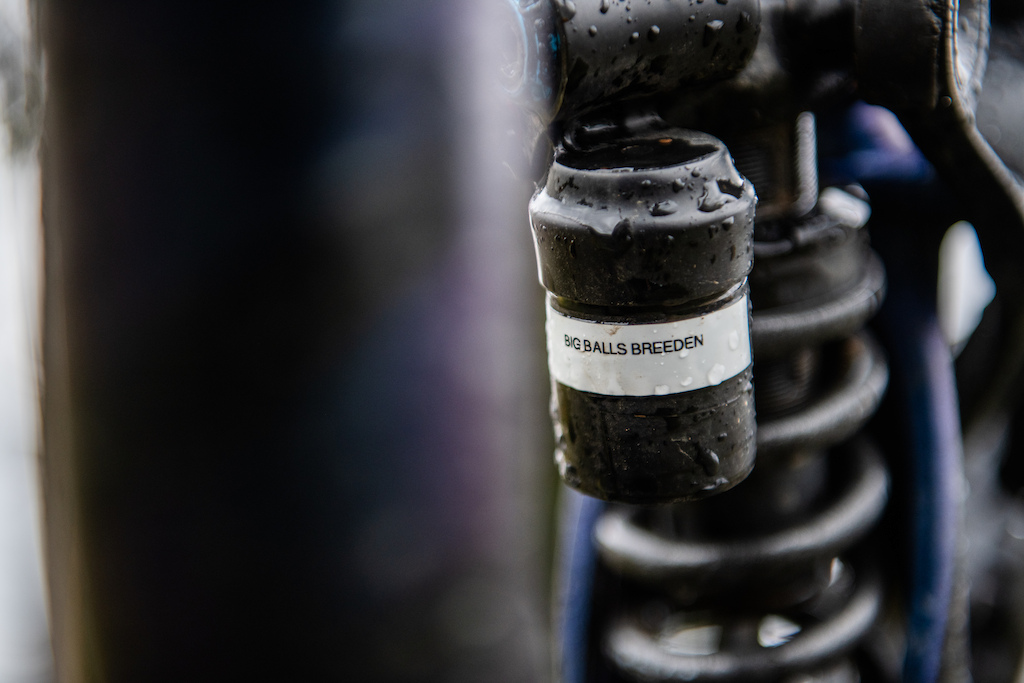 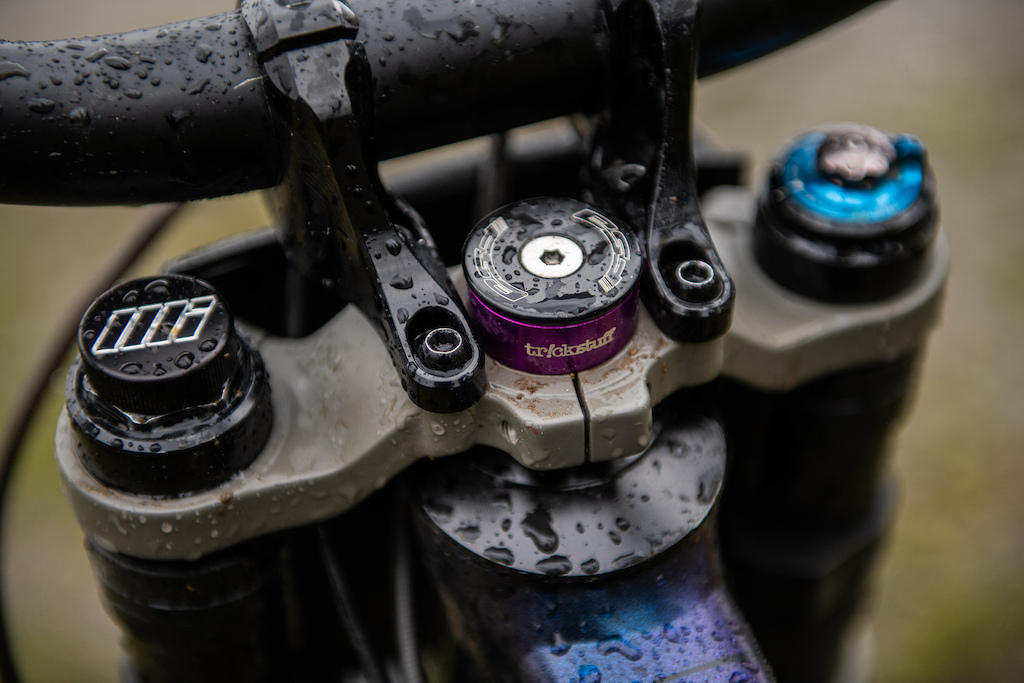 On the left you can see the Motion Instruments top cap used to run a data acquisition setup. 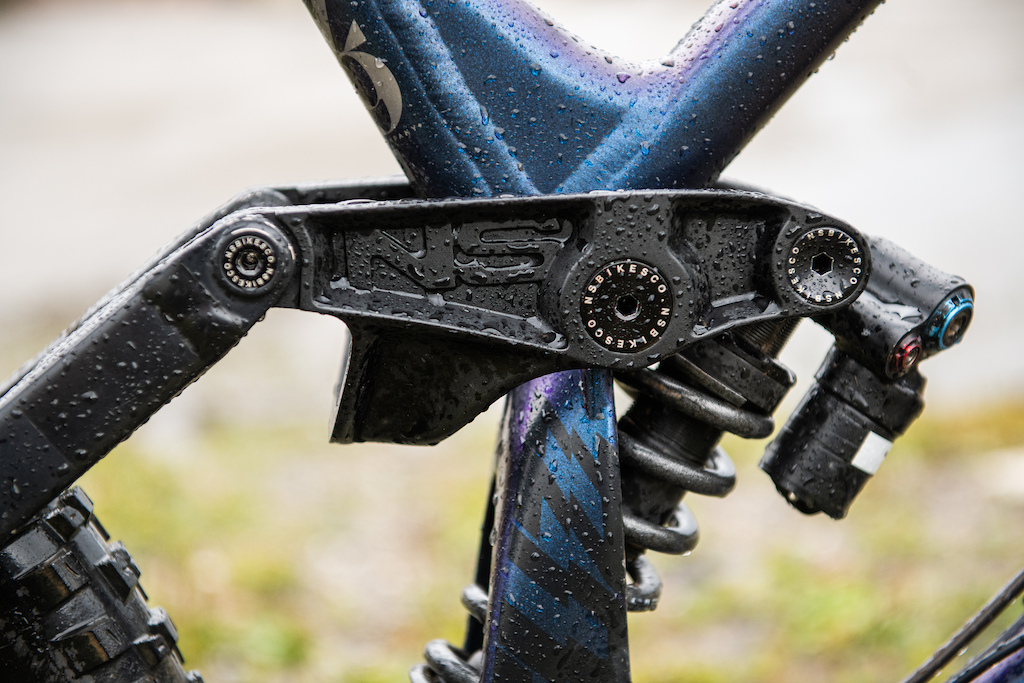 The bike uses a four-bar linkage and uses this large alloy rocker to drive the shock. 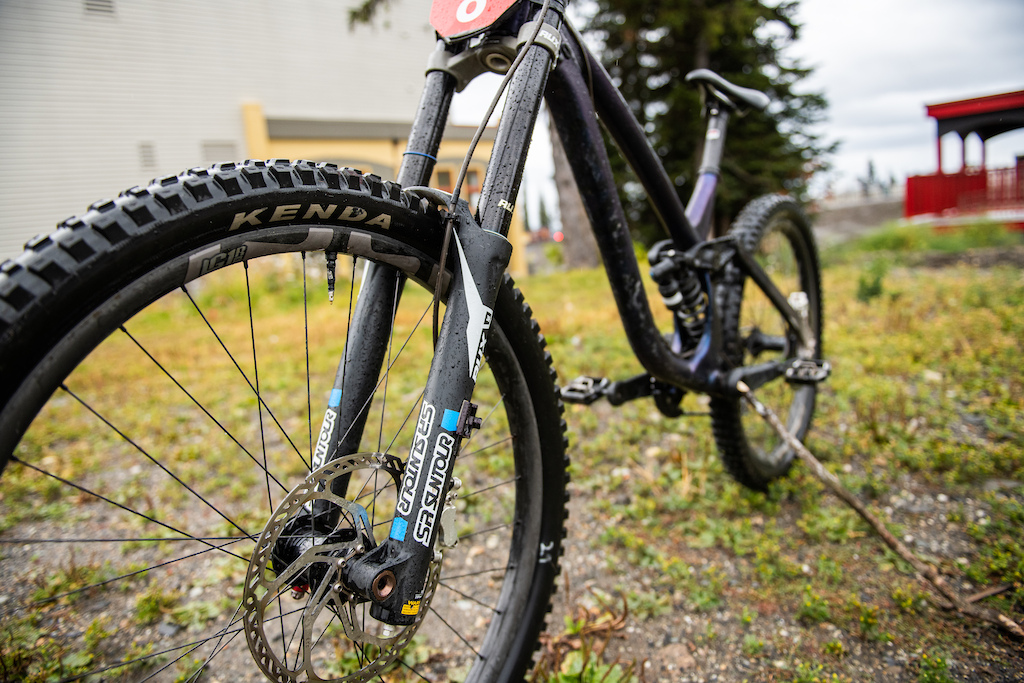 The team is using 27.5" lowers and the larger wheel fits... just. There is a 29" Rux, but sadly industry delays mean that team doesn't have it quite yet.
Drivetrain

Joe runs a drivetrain that is a mix of E13, SRAM, KMC and O-Chain. The E13 LG1 downhill wheels come with their own cassette that uses SRAM 7 & 11-speed spacing. There is protective tape from New Zealand brand VHS to keep the noise down, too. 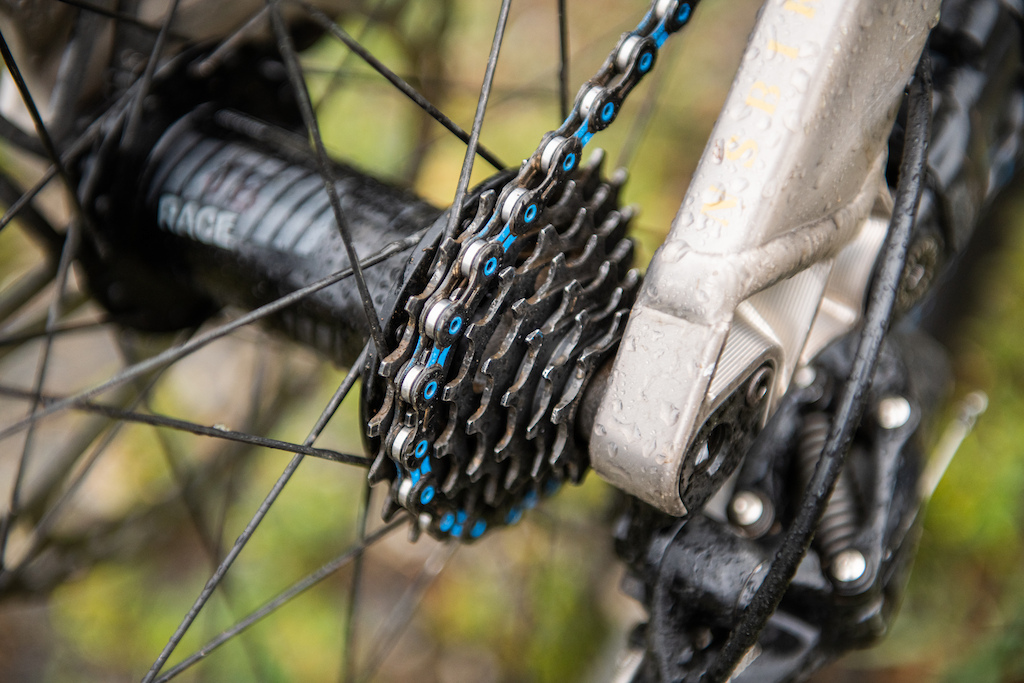 The integrated 9-21 cassette is there to primarily save space. Because it uses the width of the frame more efficiently it means that the hub flanges can be wider. 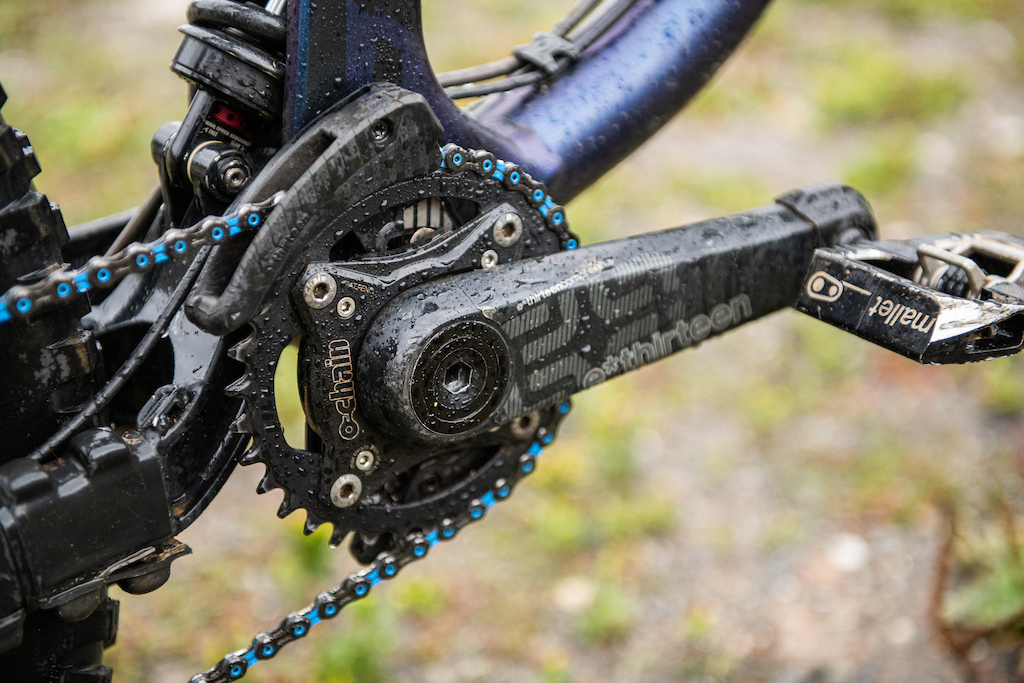 The O-Chain, which is a crank-device fitted with elastomers, aims to decouple the drivetrain forces from the suspension by suspending the chainring. The E13 LG1 carbon cranks are 165mm in length. 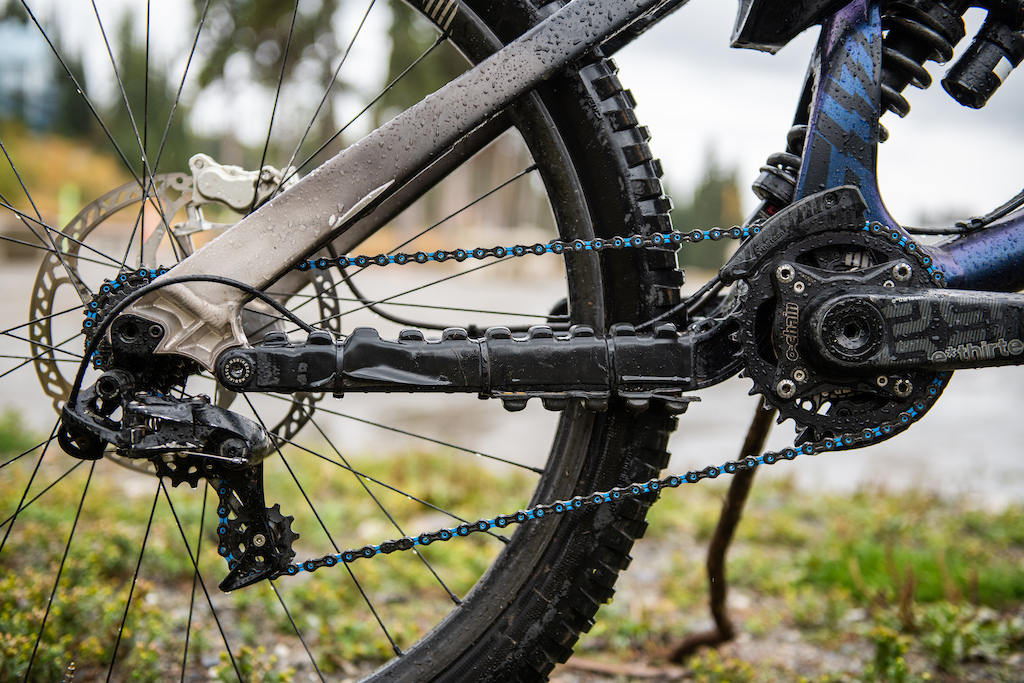 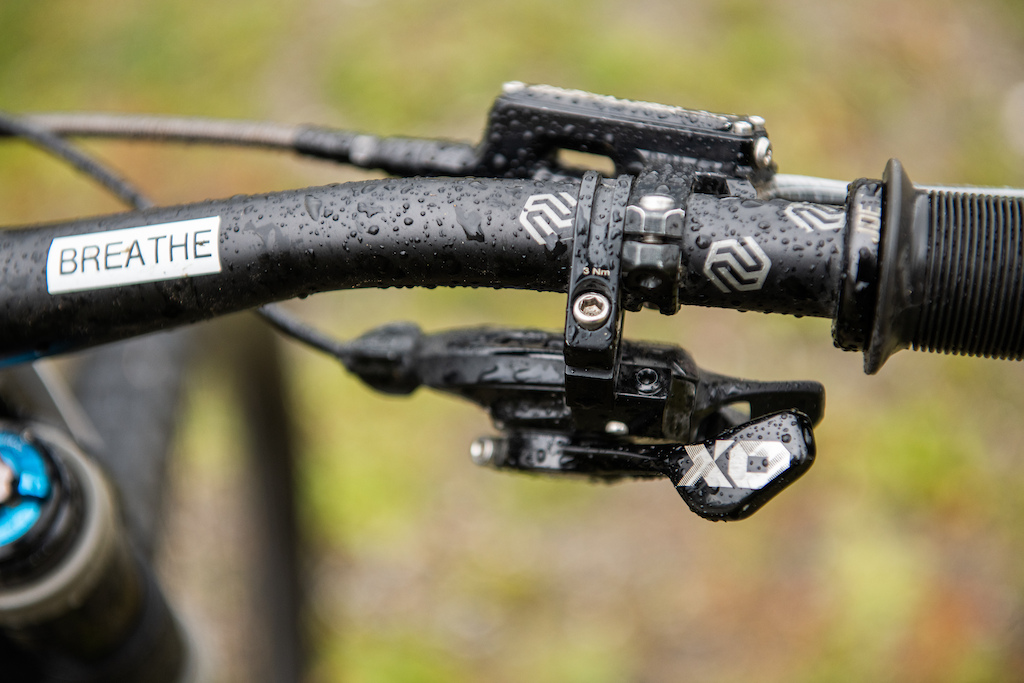 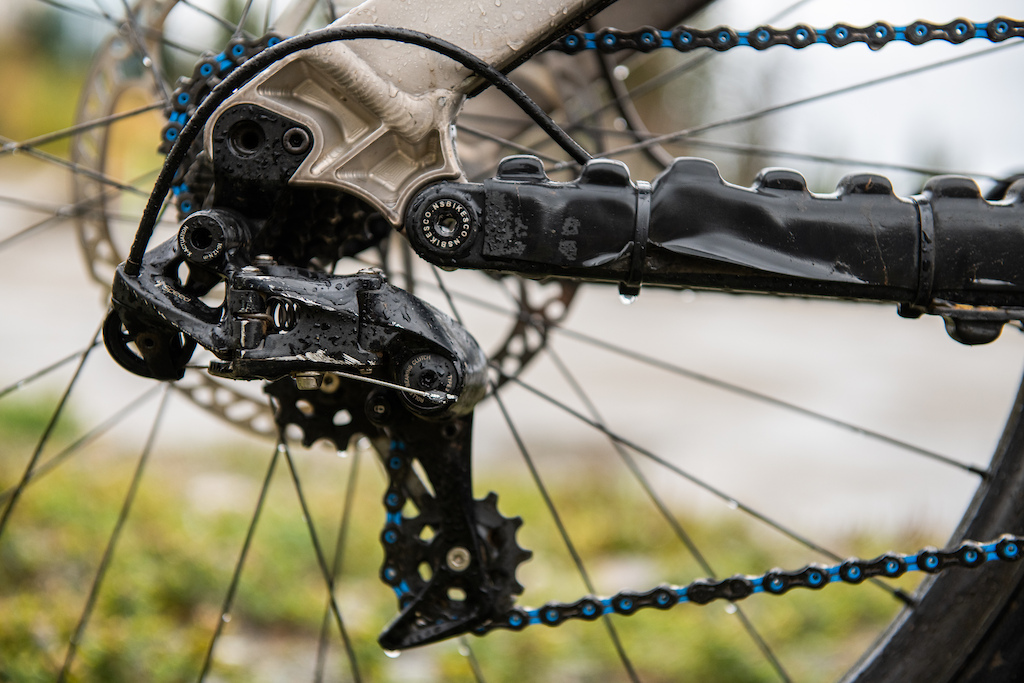 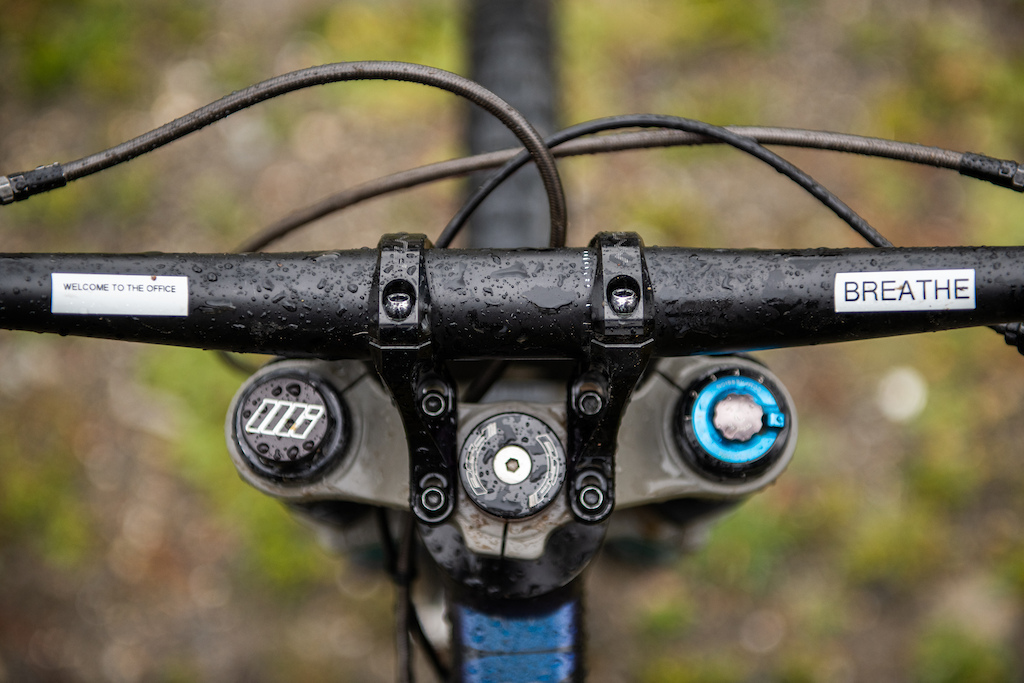 Keeping it simple with the instructions. 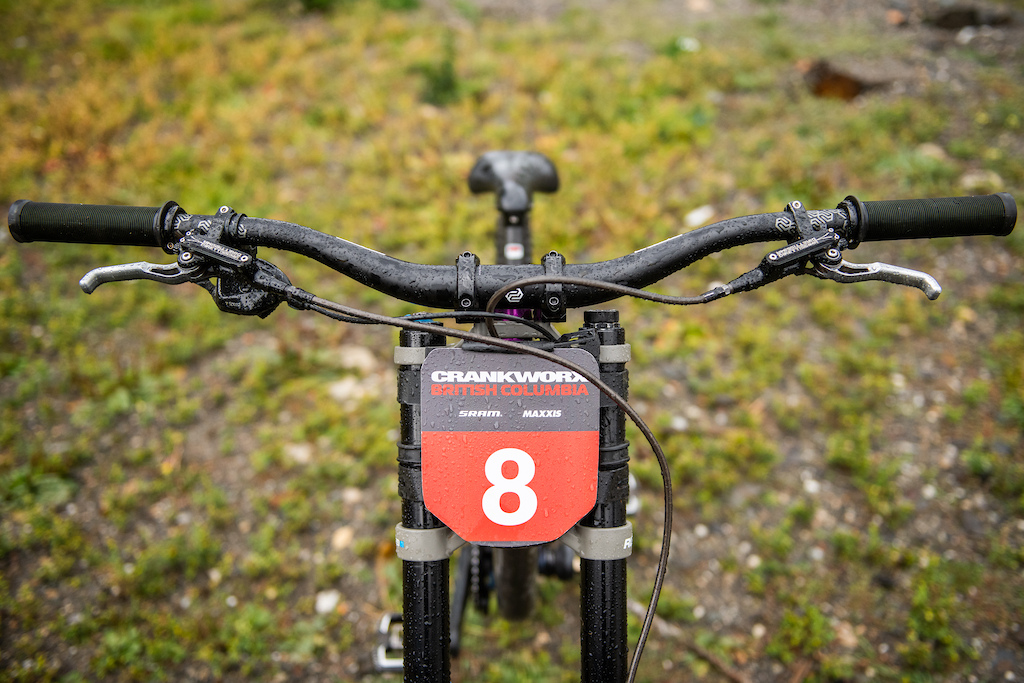 The Promax bars were developed with the team over a number of years. Here, Joe runs the 40mm rise version at 780mm width. There will be 20 and 30mm rise options too. 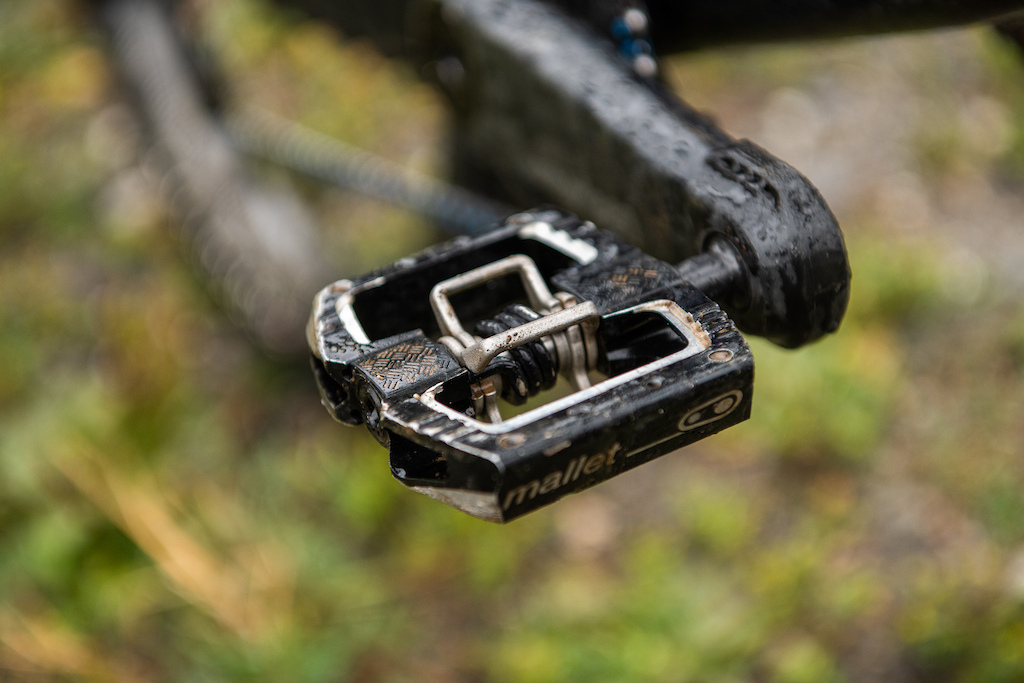 A set of Crankbrothers Mallet DH pedals with all the pins removed. 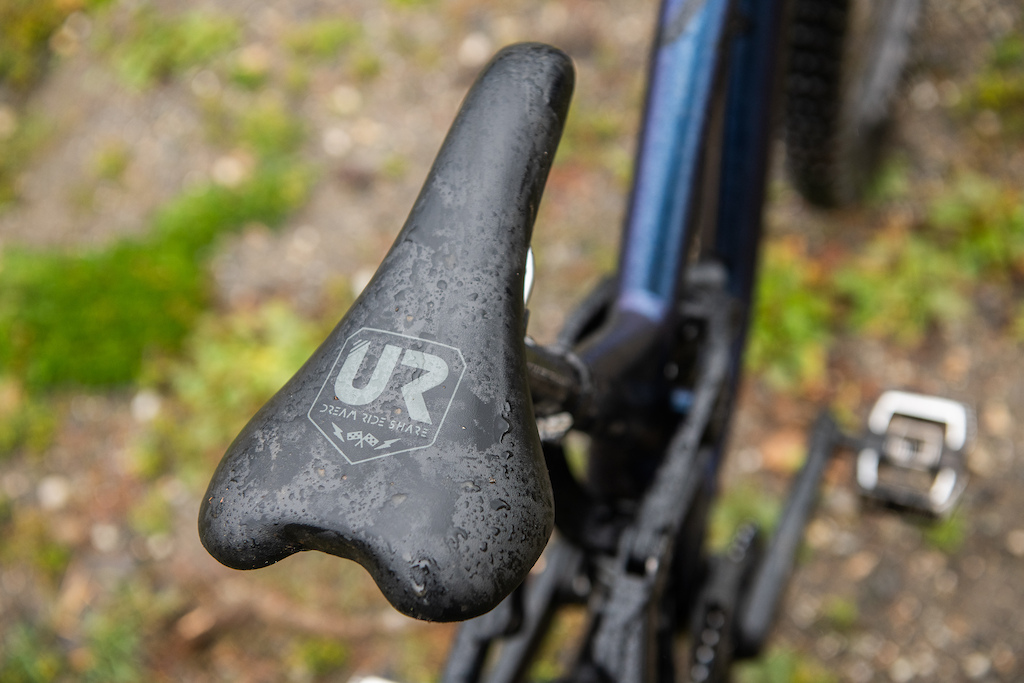 Joe runs the Trickstuff Dirretissema levers with Maxima calipers. The brakes have 223mm rotors front and back. He's used this setup all season and has grown accustomed to the power on offer. This isn't a combination we've often seen before but it's not uncommon for racers to mix up levers and calipers to find the characteristics they're after. The Dirretissema is a very powerful brake in its own right. I'd be curious to see how this blend performs on the trail. 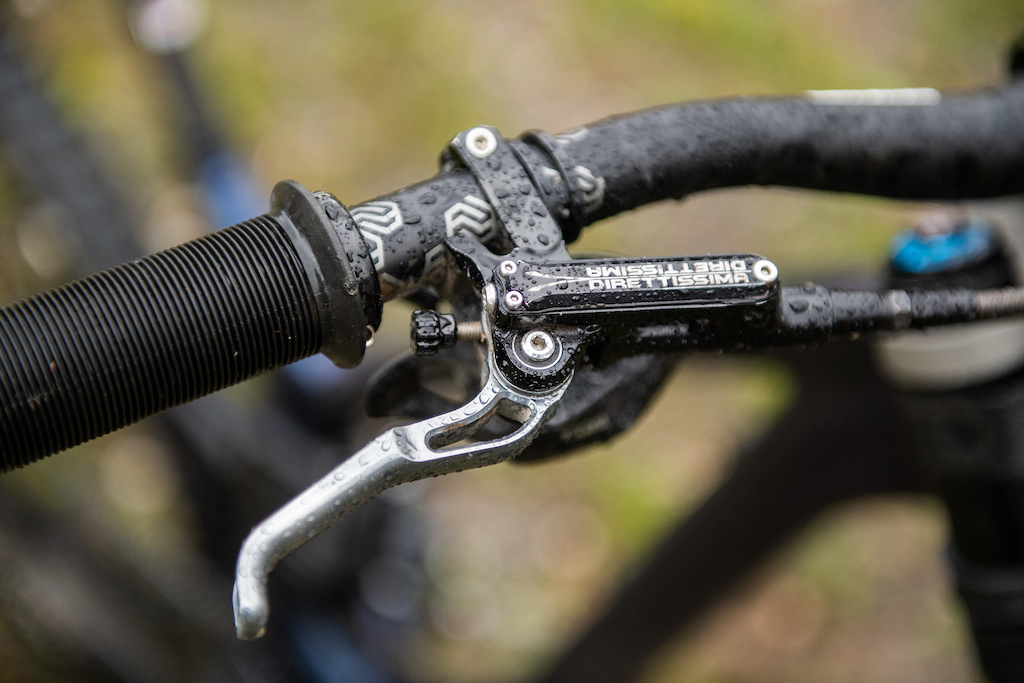 The Dirretissema is second only to the Maxima in Trickstuff's power hierarchy. 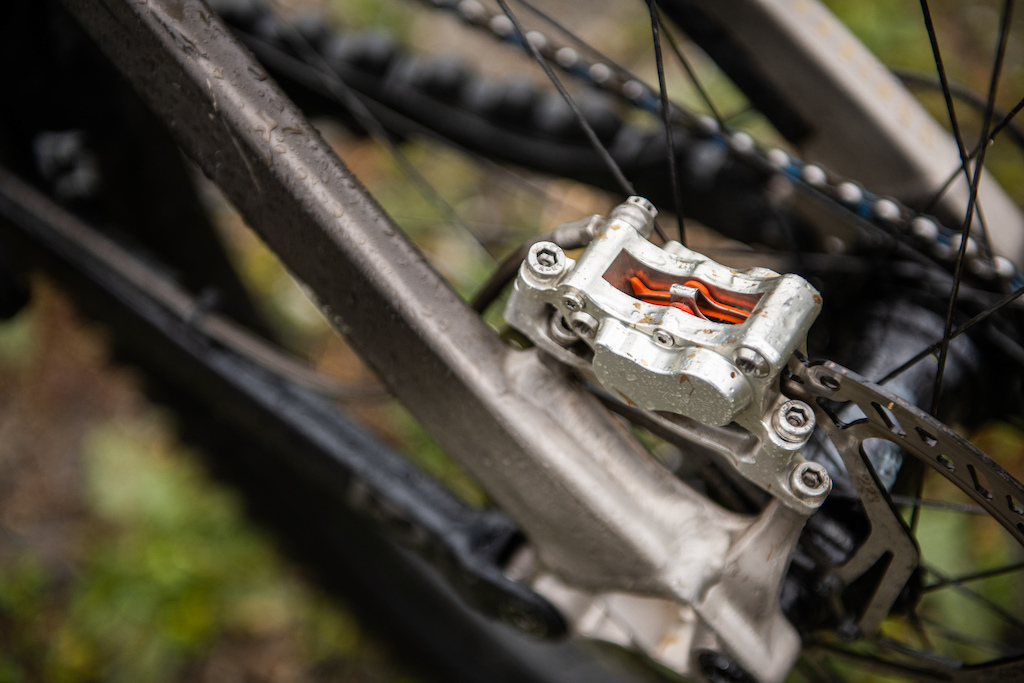 The Maxima, as the name would suggest, is a large and powerful brake.
Wheels

Joe runs E13's LG1R downhill wheels shod with Kenda prototype tires. At Psychosis he was using 22 and 26 psi, one digit lower than normal for comfort. 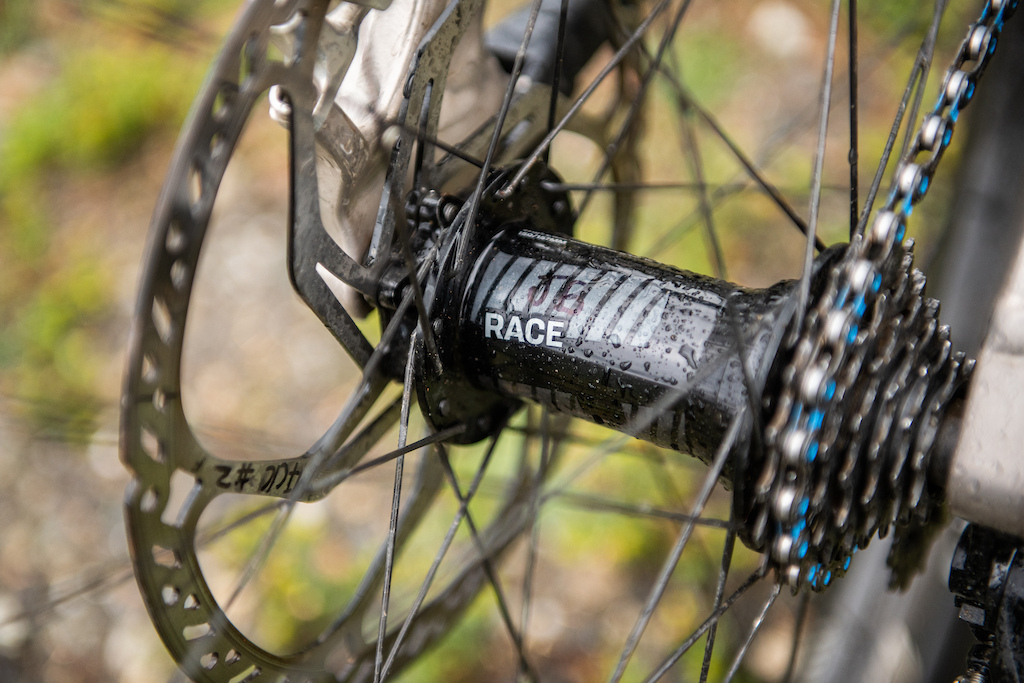 The odd scrawl of sharpie is not an uncommon sight on a race bike. Joe's NS is no different. 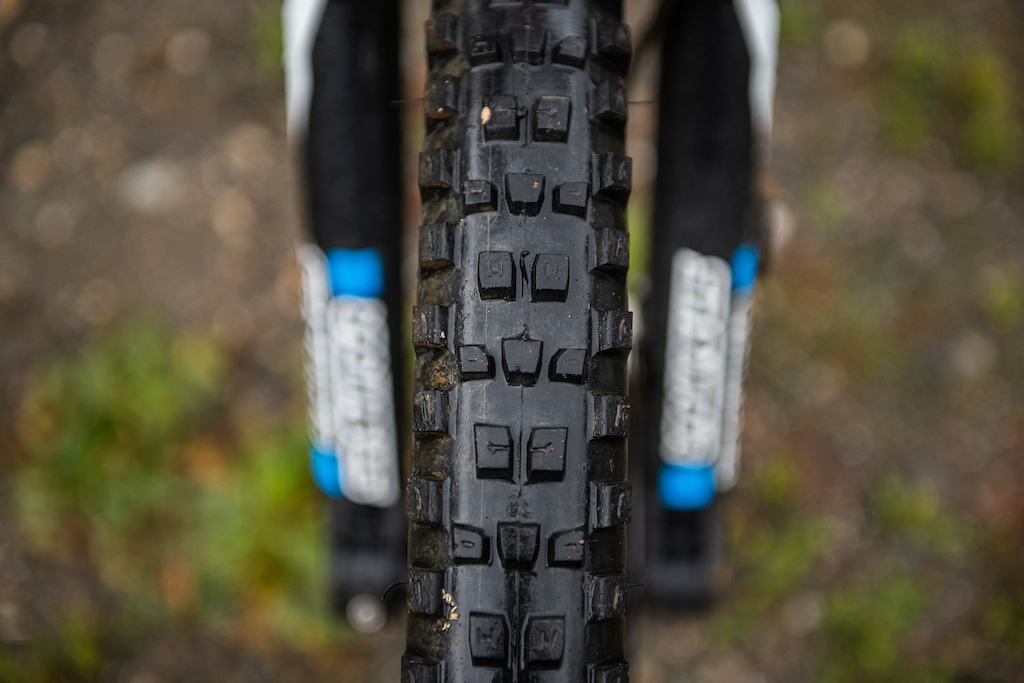 The prototype Kenda tires seem to be a halfway house between the Hellkat and the Pinner. 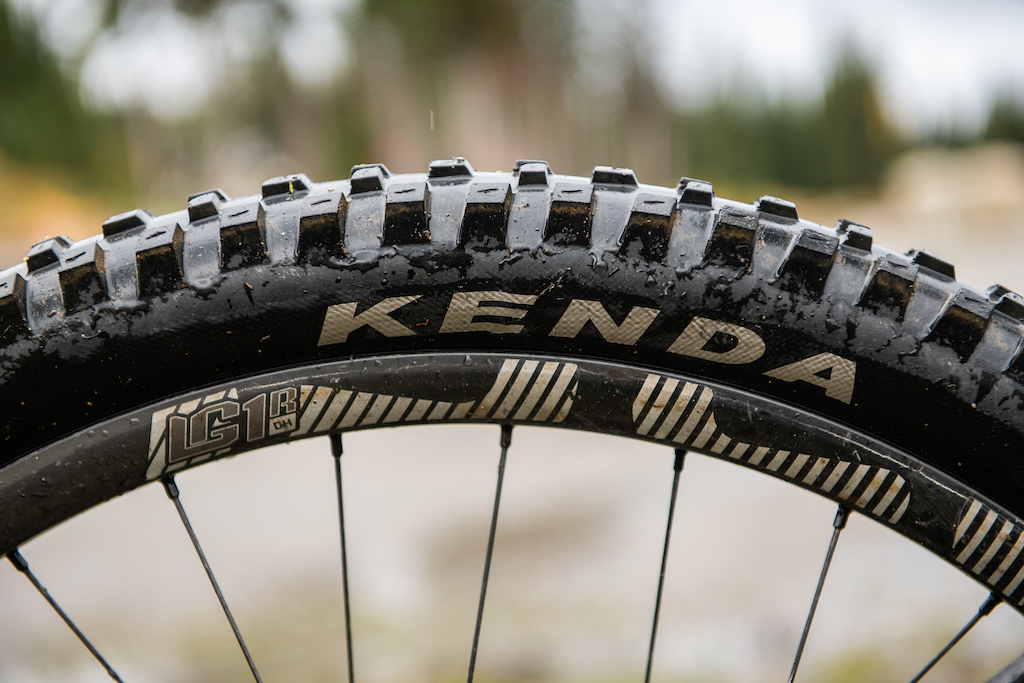 The LG1R DH wheels use a 30mm internal rim width.

freerideneverdies (Sep 30, 2021 at 12:57)
Loads of wc racers use them to eliminate pedal kickback, and slighly increase small bump sensitivity.

enduroNZ (Sep 30, 2021 at 18:23)
Suntour seem to be a genuine contender for fox and rockshox but you still just can’t buy the decent models anywhere

Velorider99 (Sep 30, 2021 at 12:31)
Direttissima levers with Maxima Calipers! As someone who’s used both the DRT’s definitely had a more solid bite point. I wonder if this is the best feeing/most powerful brake out there.

boozed (Sep 30, 2021 at 17:13)
I love that they've even sharpied over the damper adjusters on the unspecified coil shock of unknown origin.

Vlad-Putin (Sep 30, 2021 at 14:11)
@gtill9000: I have a high pivot/idler bike and am blown away by how much removing pedal kickback improved the bike feel to me vs prior Horst link bikes. I guess the ochain would have a similar effect