Journey Back in Time With Hoshi Yoshida's 'No EXIF #5' Photos 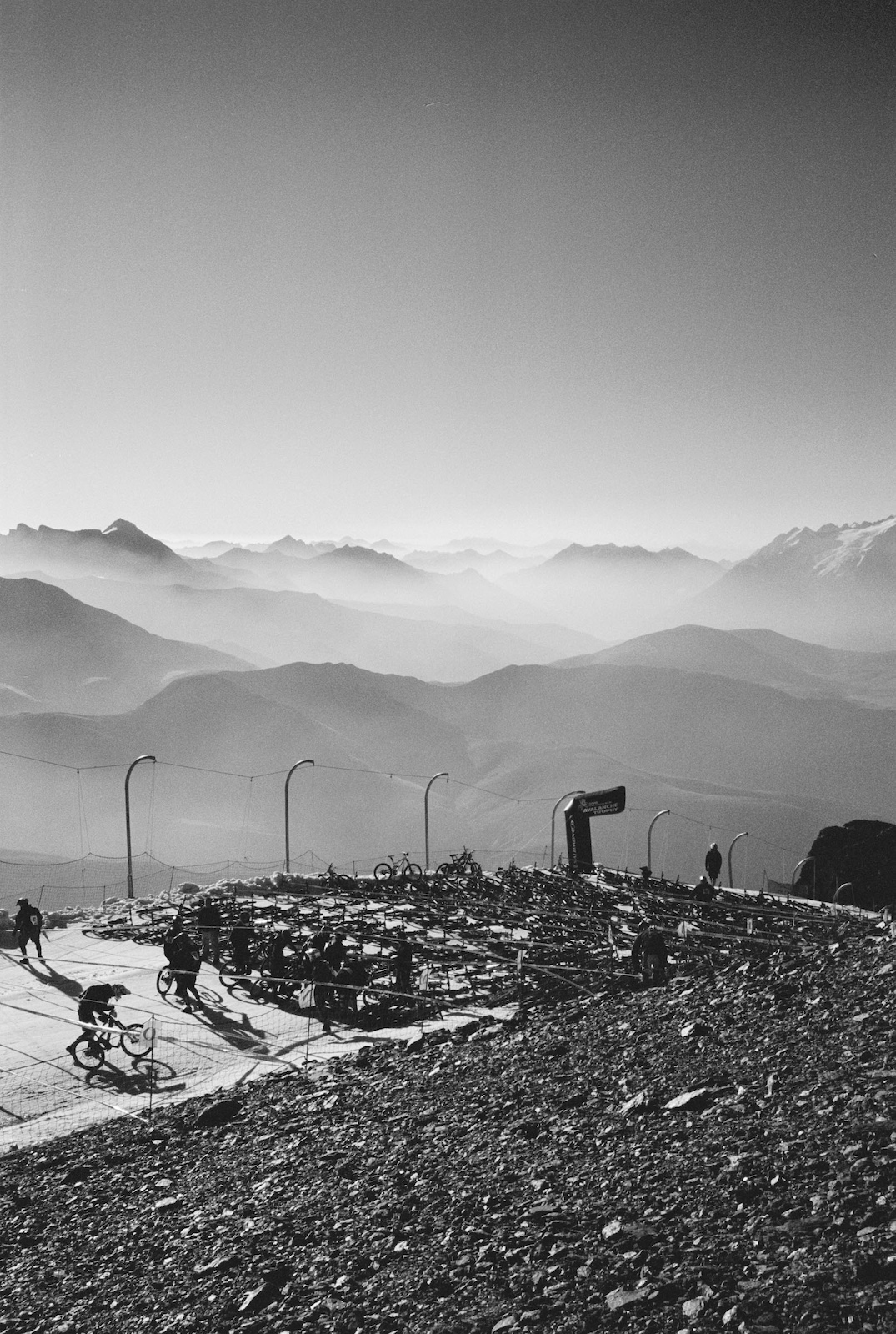 NO EXIF 5
slow down photography
2 0 0 7
LEICA M6 analogue photos
ILFORD XP2 Film
LEICA Summilux-M 1:1,4 / 35 mm ASPH lens
Photog-in-training with no clue how to handle a LEICA: Hoshi Yoshida
I recently opened the archive of my early days with the Leica M6. The photos from 2007 are anything but brilliant. They’re just casual shots taken between digital shots. So-called 'freetime' photos taken during the serious photography work. I remember I had a hard time figuring out how to shoot analog. Without the display confirming my shots, I was in the dark. 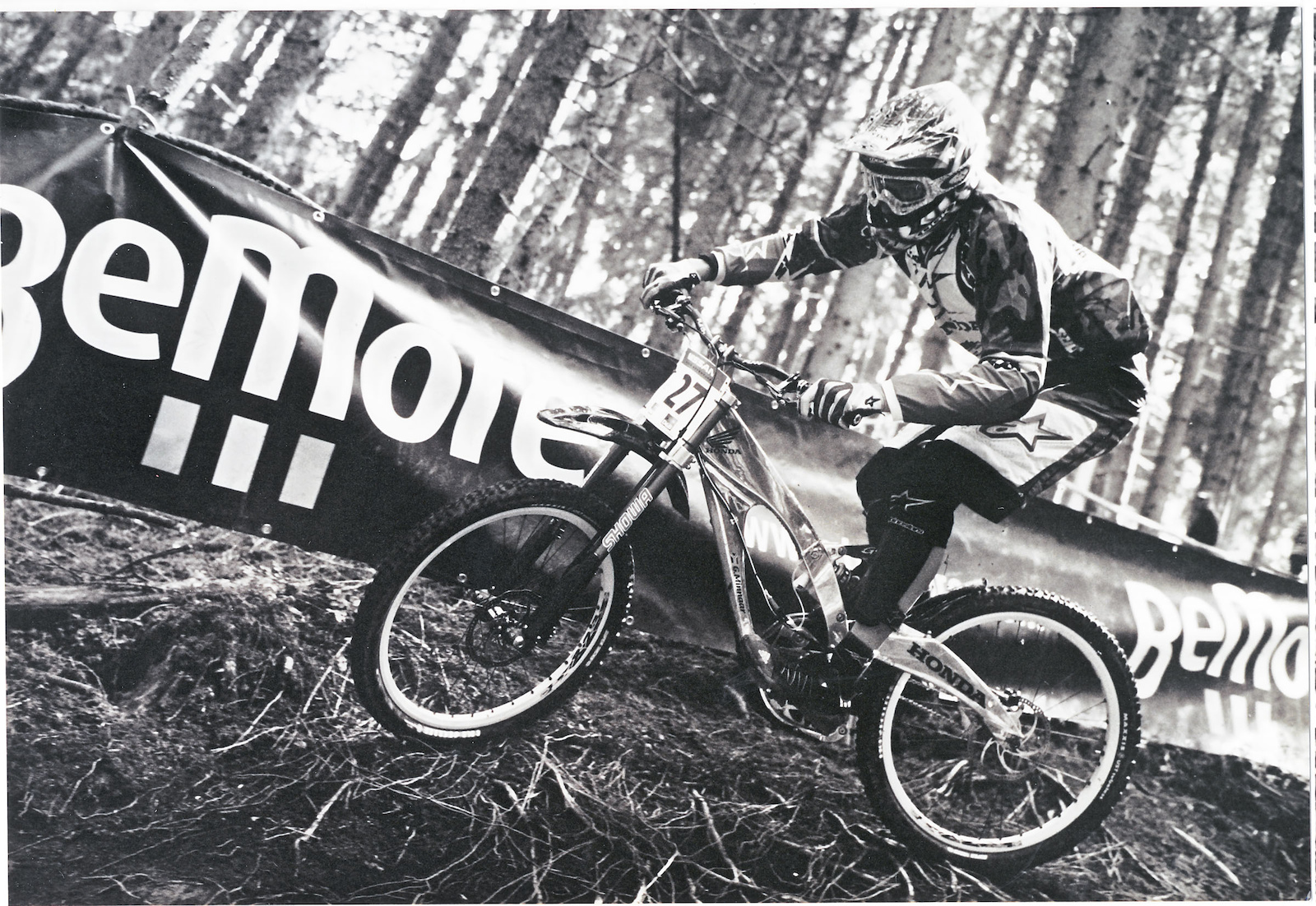 This is Greg Minnaar on his hand polished HONDA RN01, riding the Schladming World Cup DH course in June 2007.

Looking through these ten-year-old photos was interesting, to say the least. The decade had added a historical aspect. It doesn’t make the photos better but it tells a story. 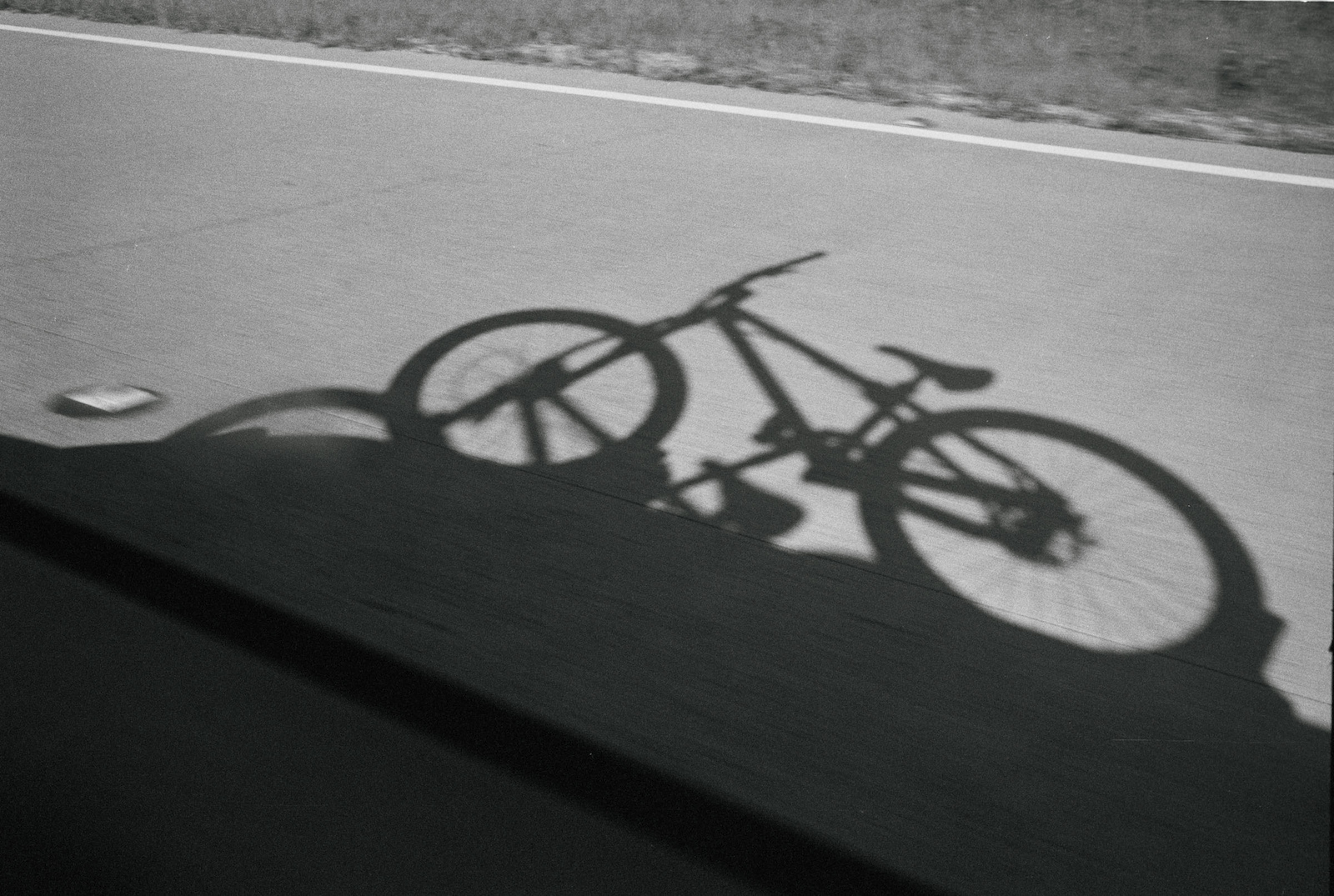 I had started practicing on my analog LEICA M6 during a road trip across Australia in early 2007. 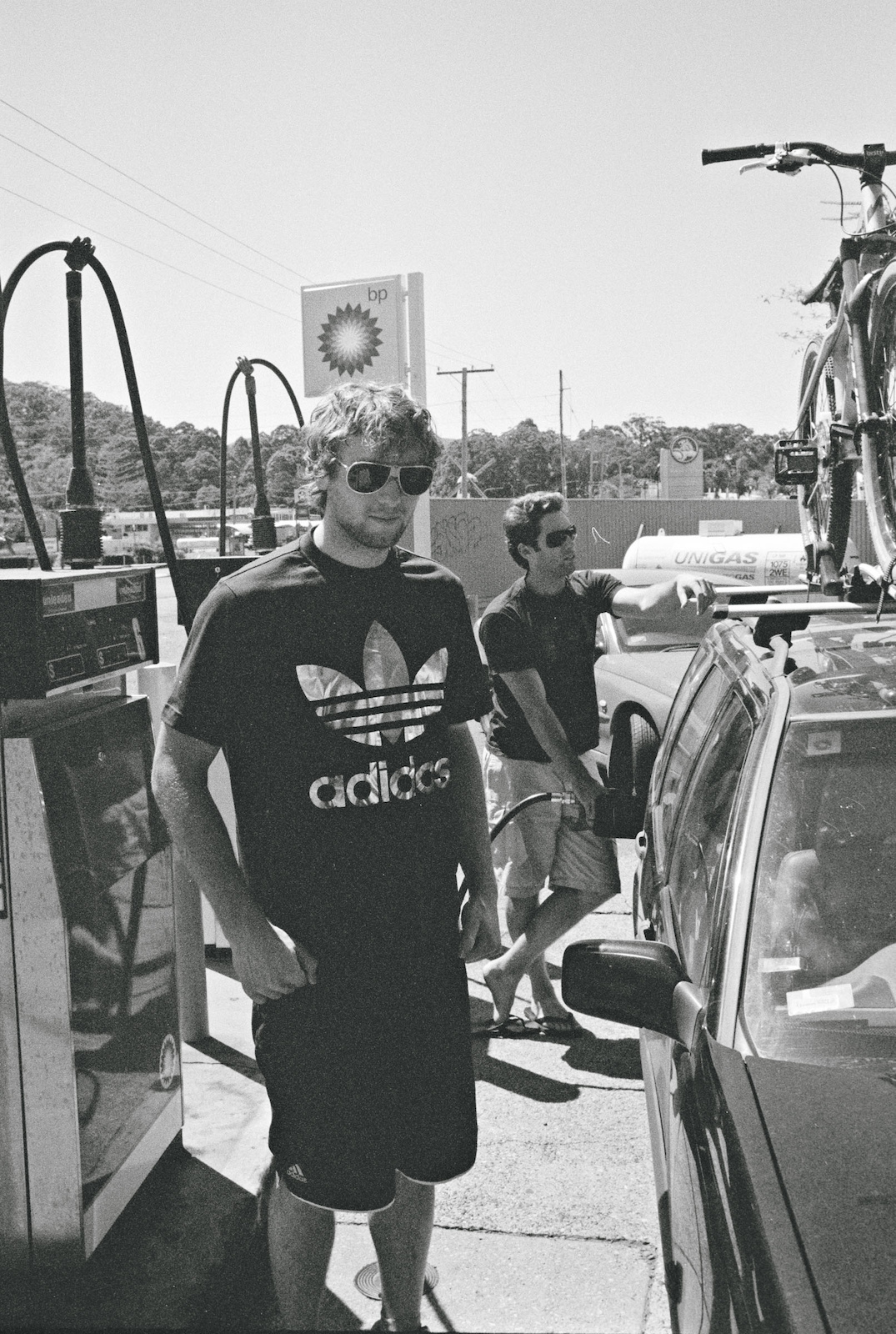 I was shooting the German slopestyler Joscha Forstreuter, but he sadly injured himself at the beginning of the trip. 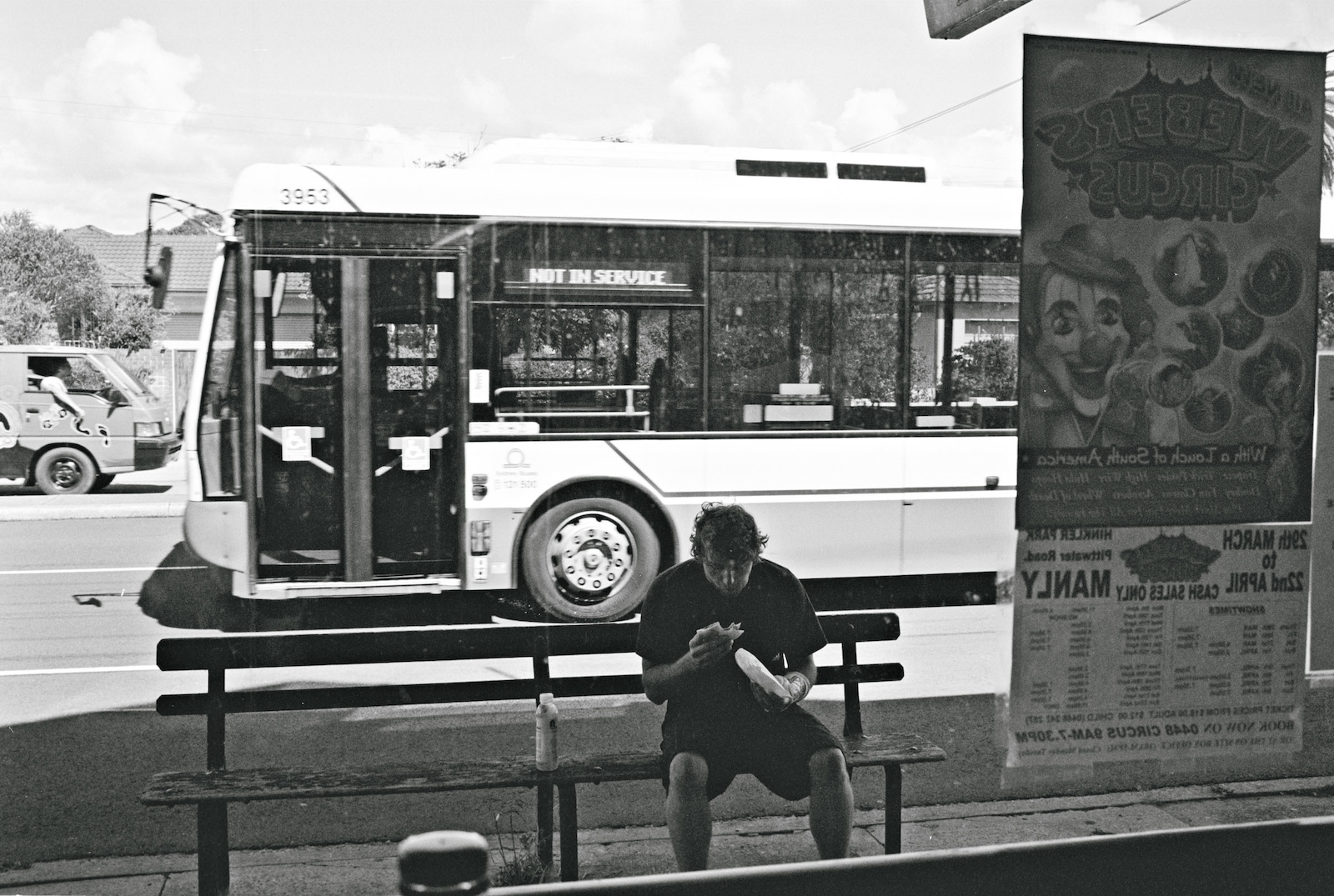 What a coincidence that the bus in the background was “Not In Service”. 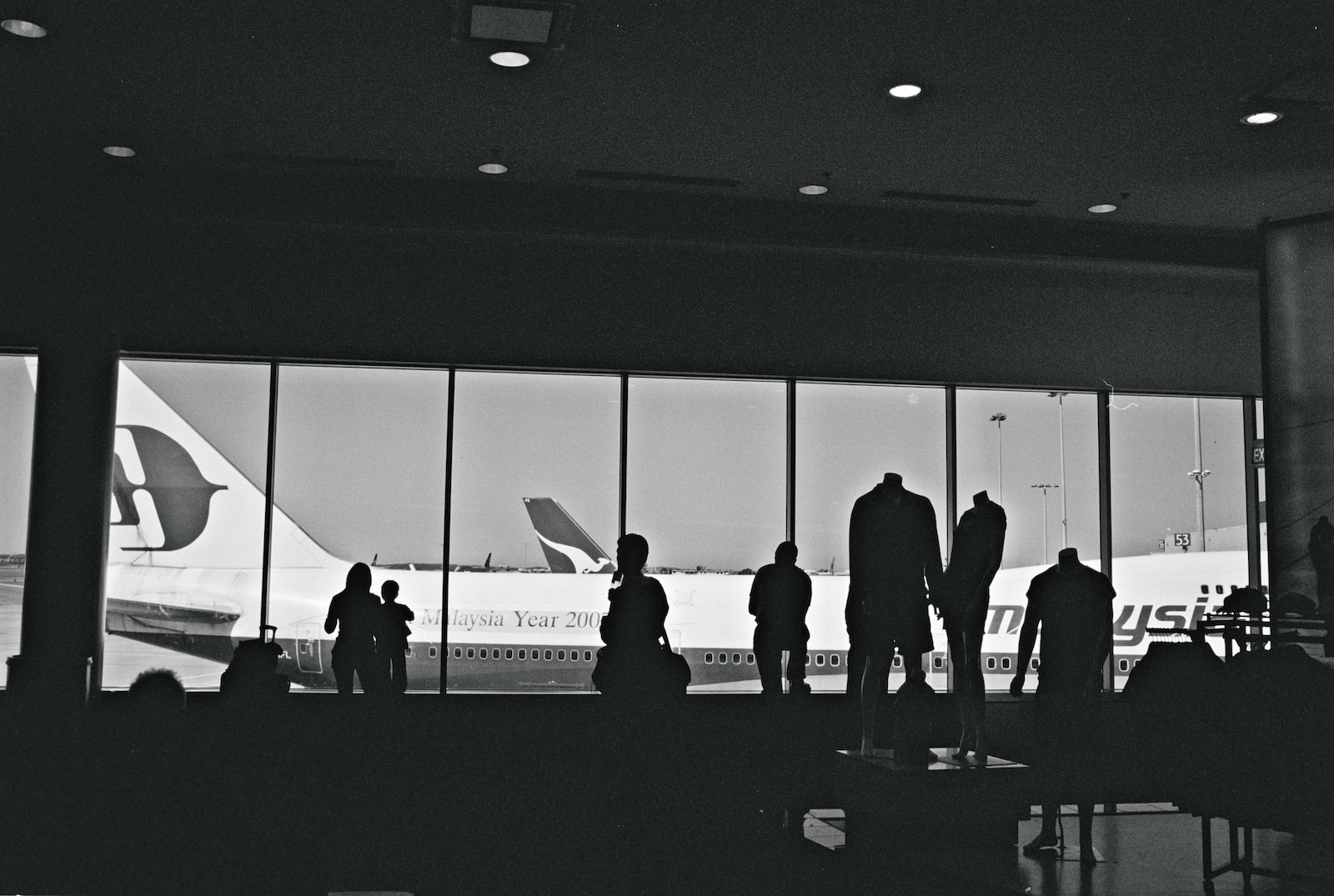 I figured out that black and white photography is all about seeing the contrasts. 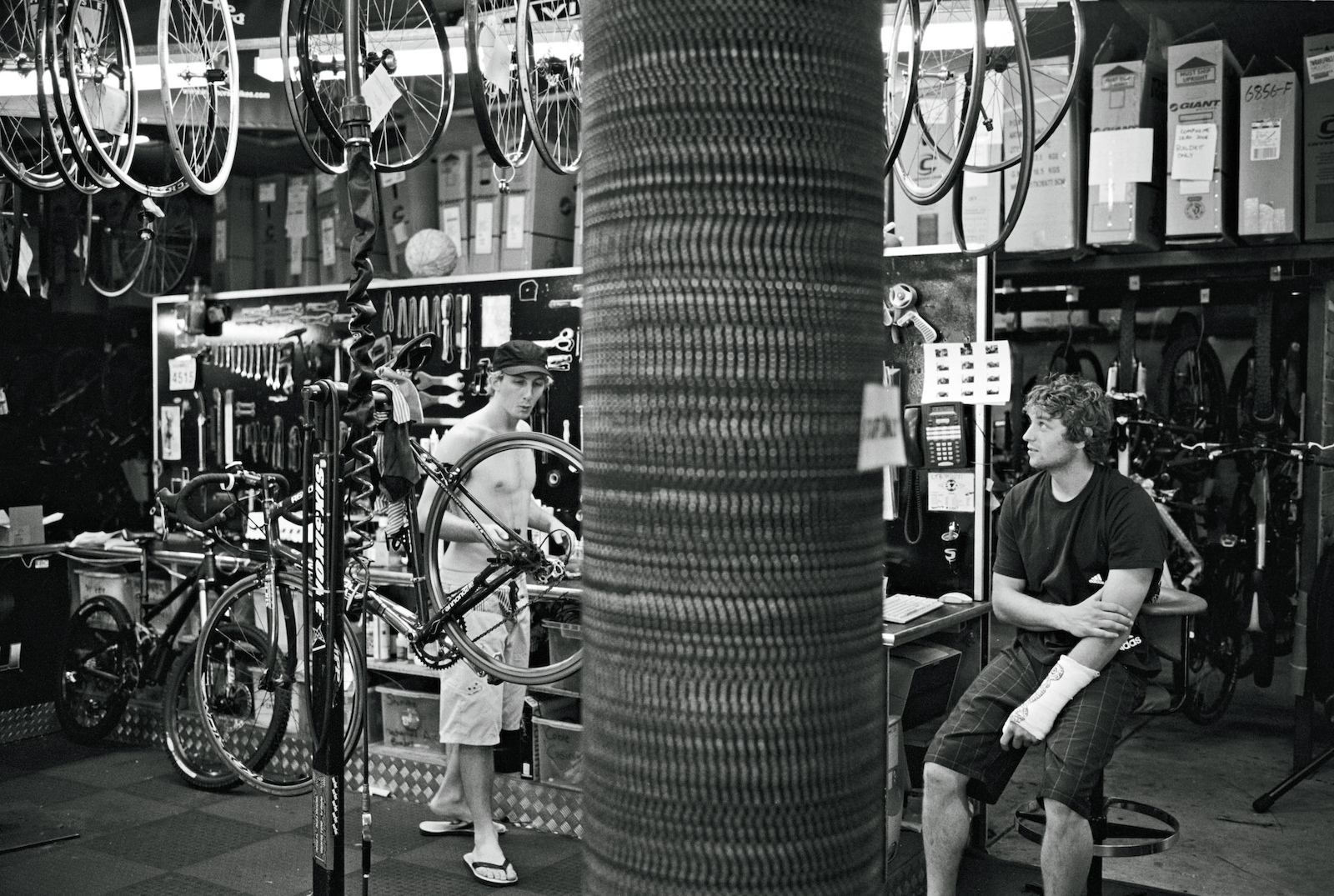 We hung out in bike shops. 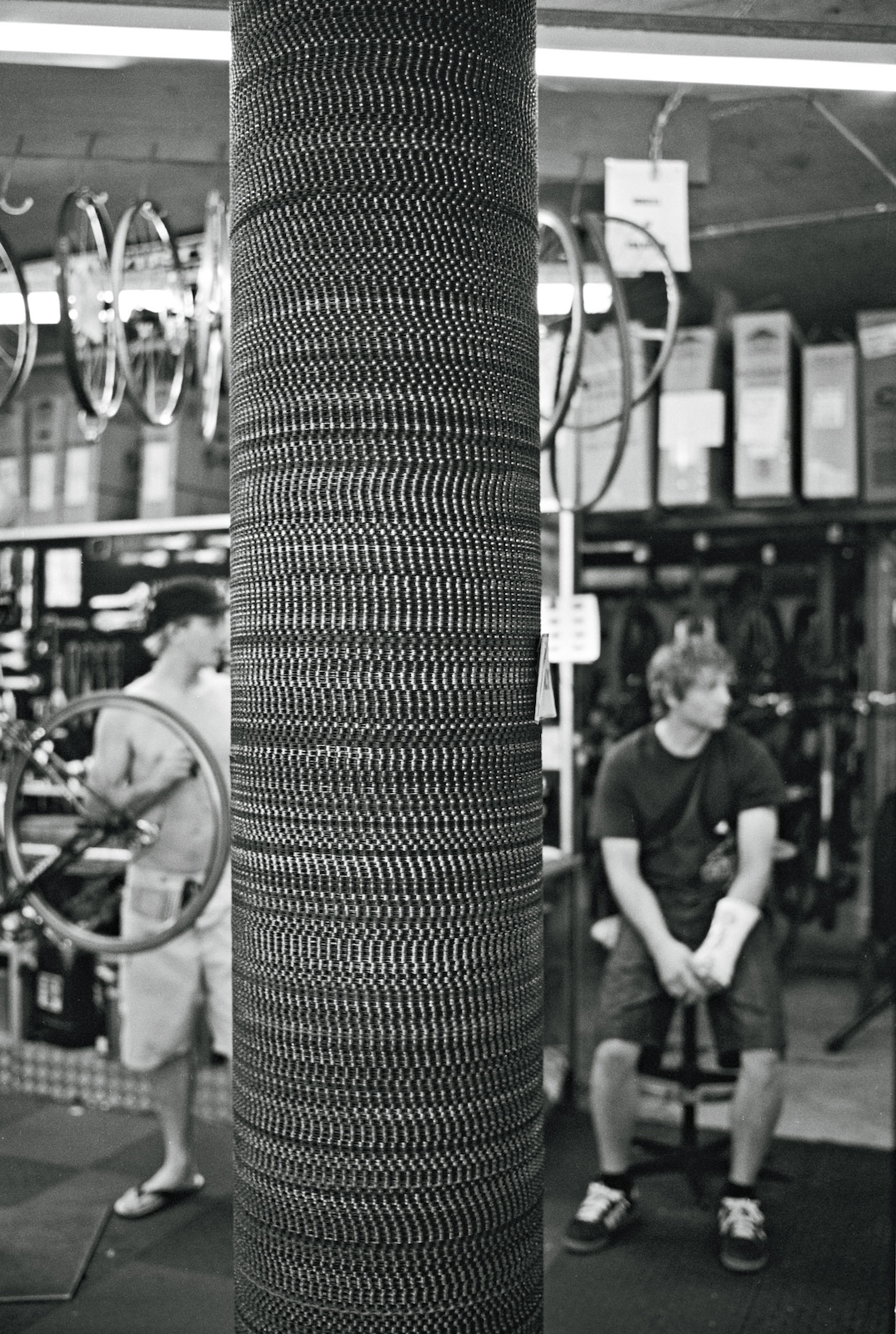 I now understand the meaning of a chain store. 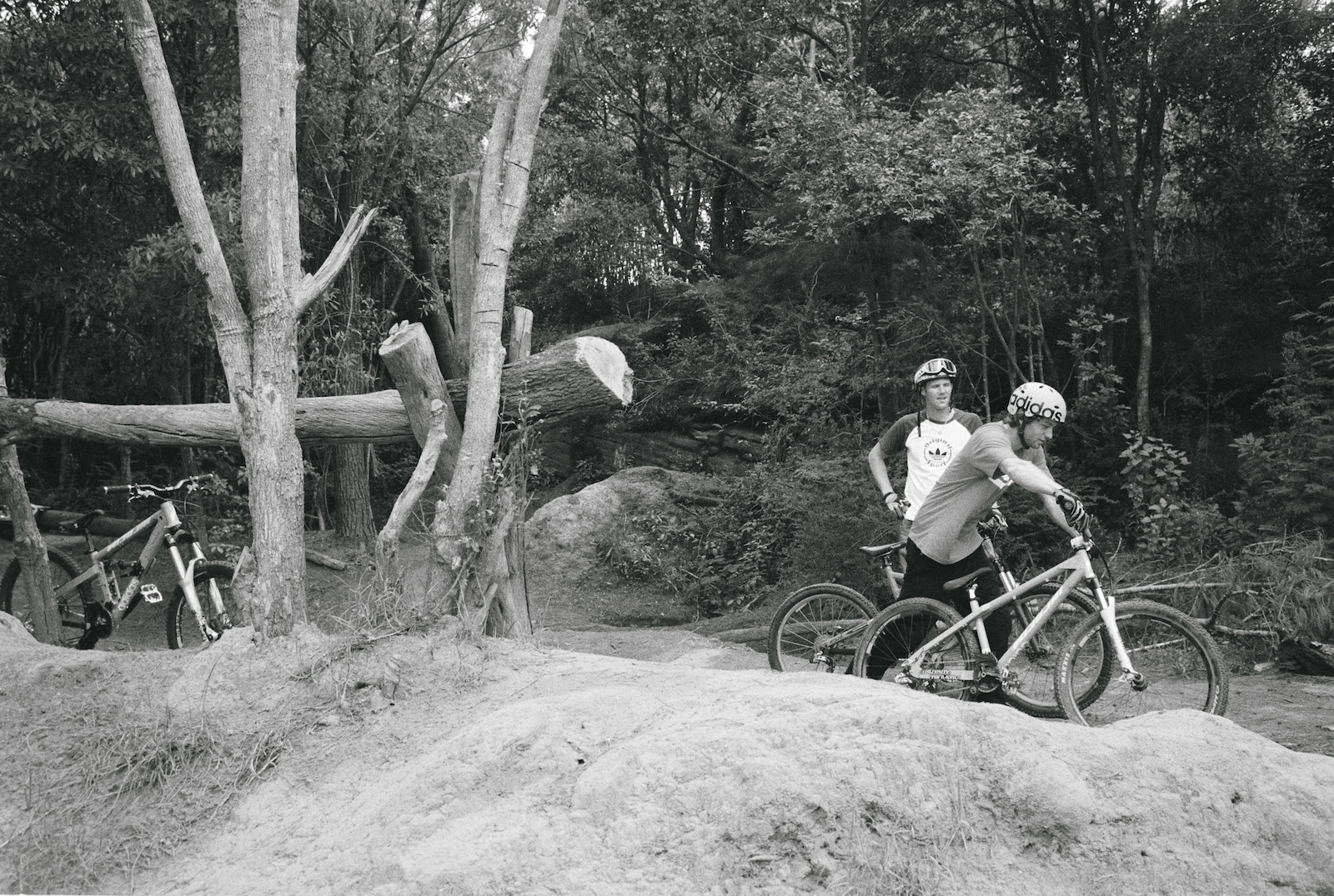 Behind Joscha is Pierre Edouard Ferry (aka PEF) - the Frenchy from multiple Red Bull Rampages. 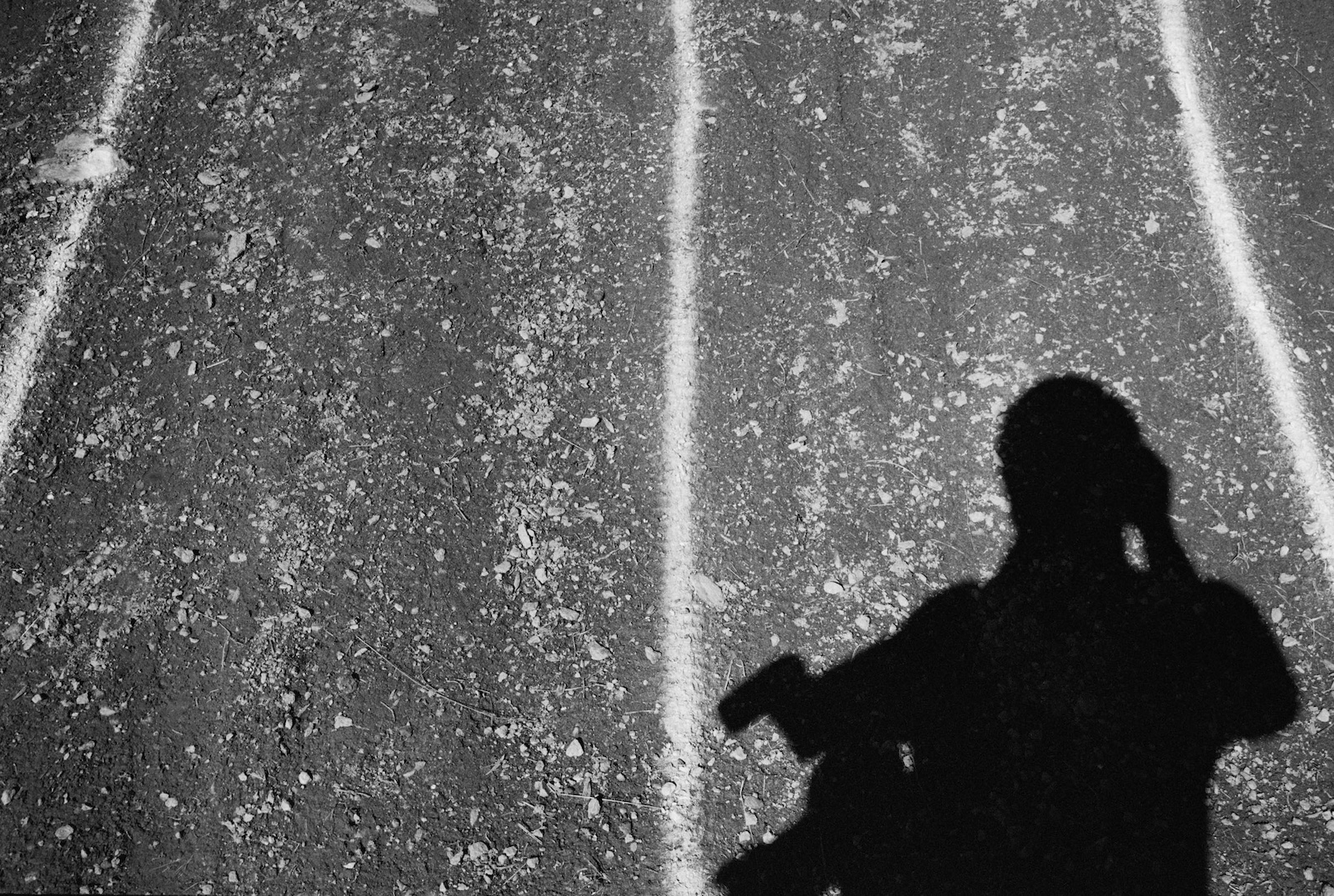 It was about contrast again. It actually makes the composition of the whole picture. 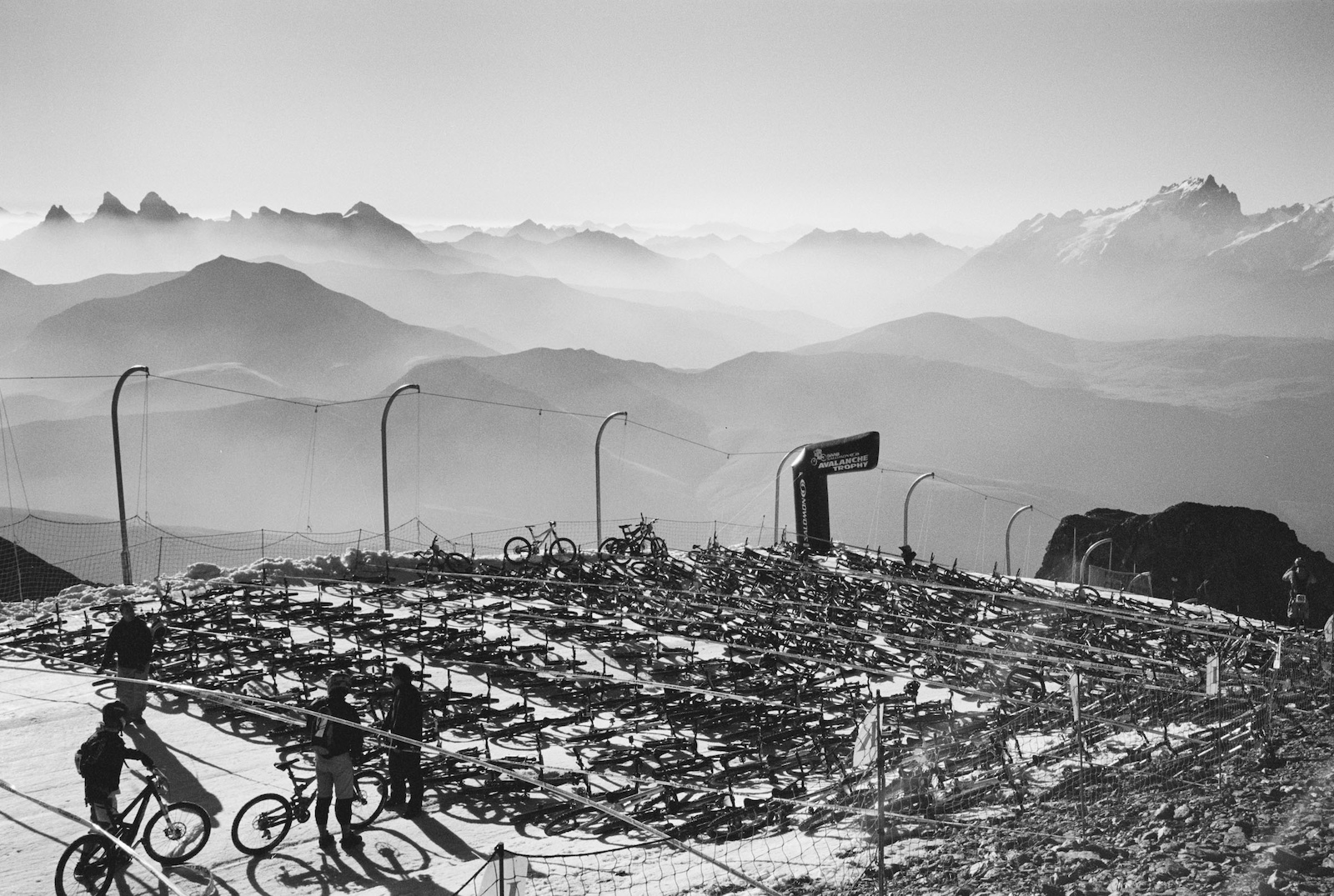 In summer 2007, I was at the Megavalanche in Alpe d’Huez. It seems like nothing has changed since then. 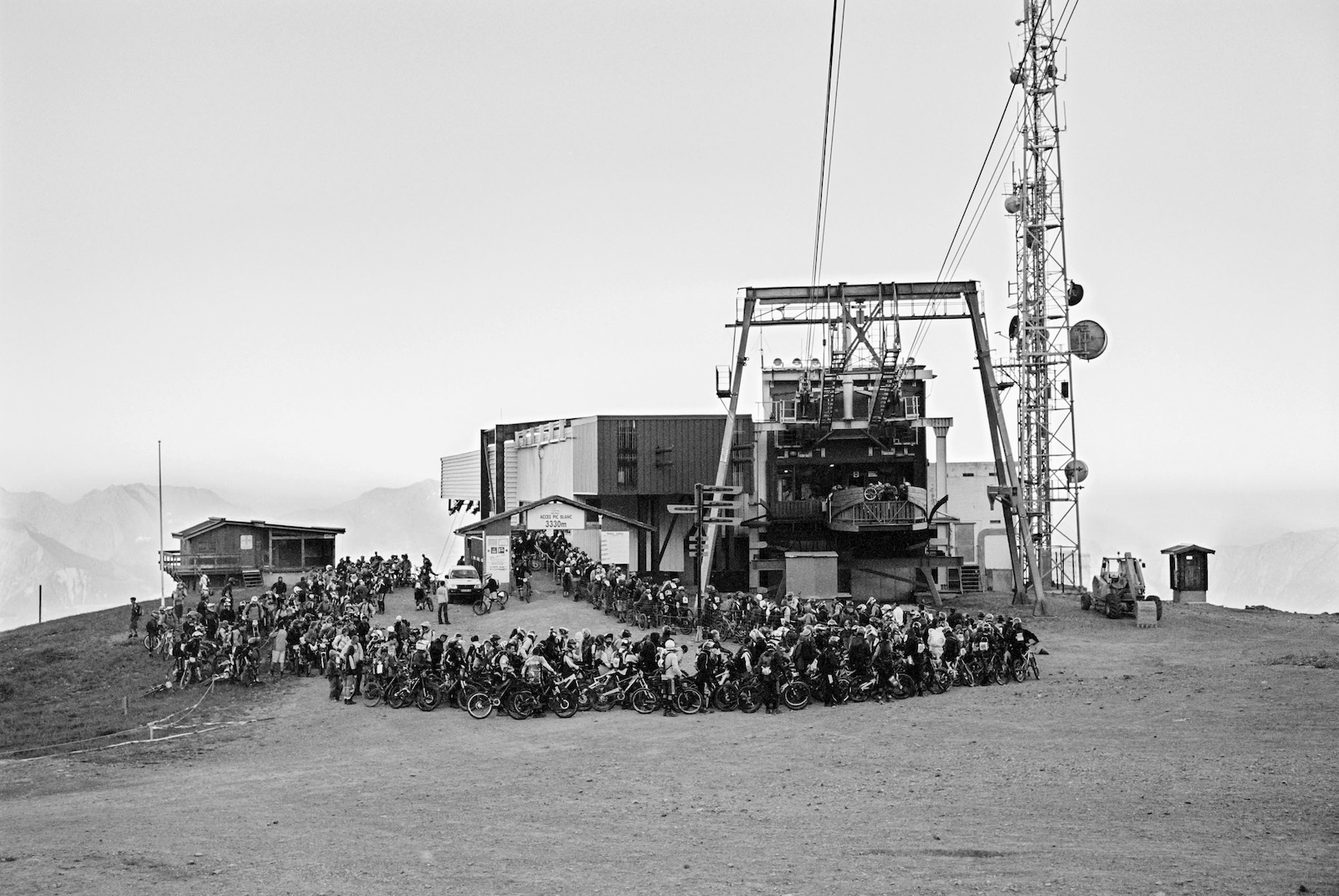 The same beautiful mountain panorama, the same queue, and the same mass start.

Adrenalin rises when the helicopter appears. 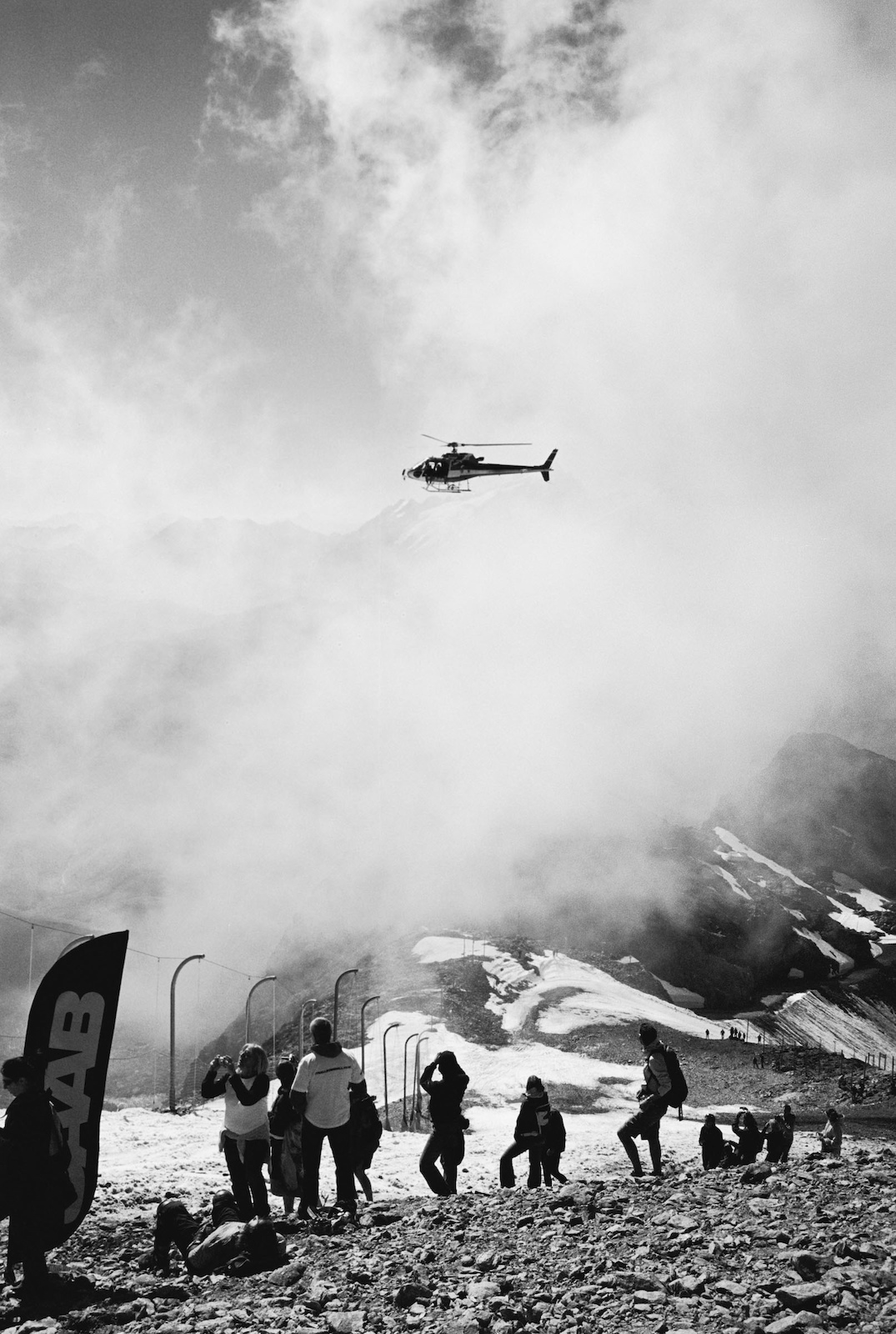 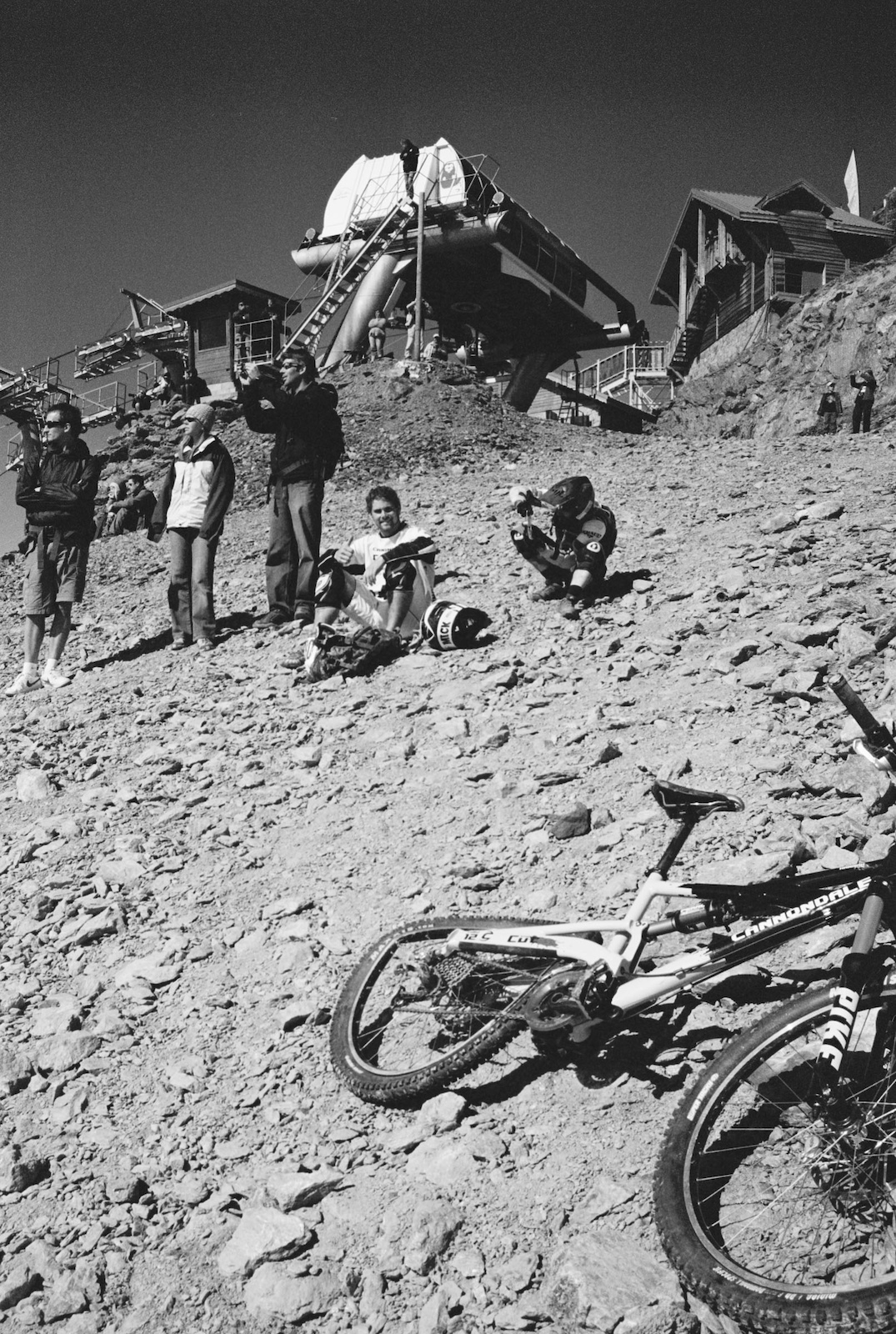 2007 was the year Mick Hannah showed up. He got tangled up in a crash at the mass start and folded his rear wheel. 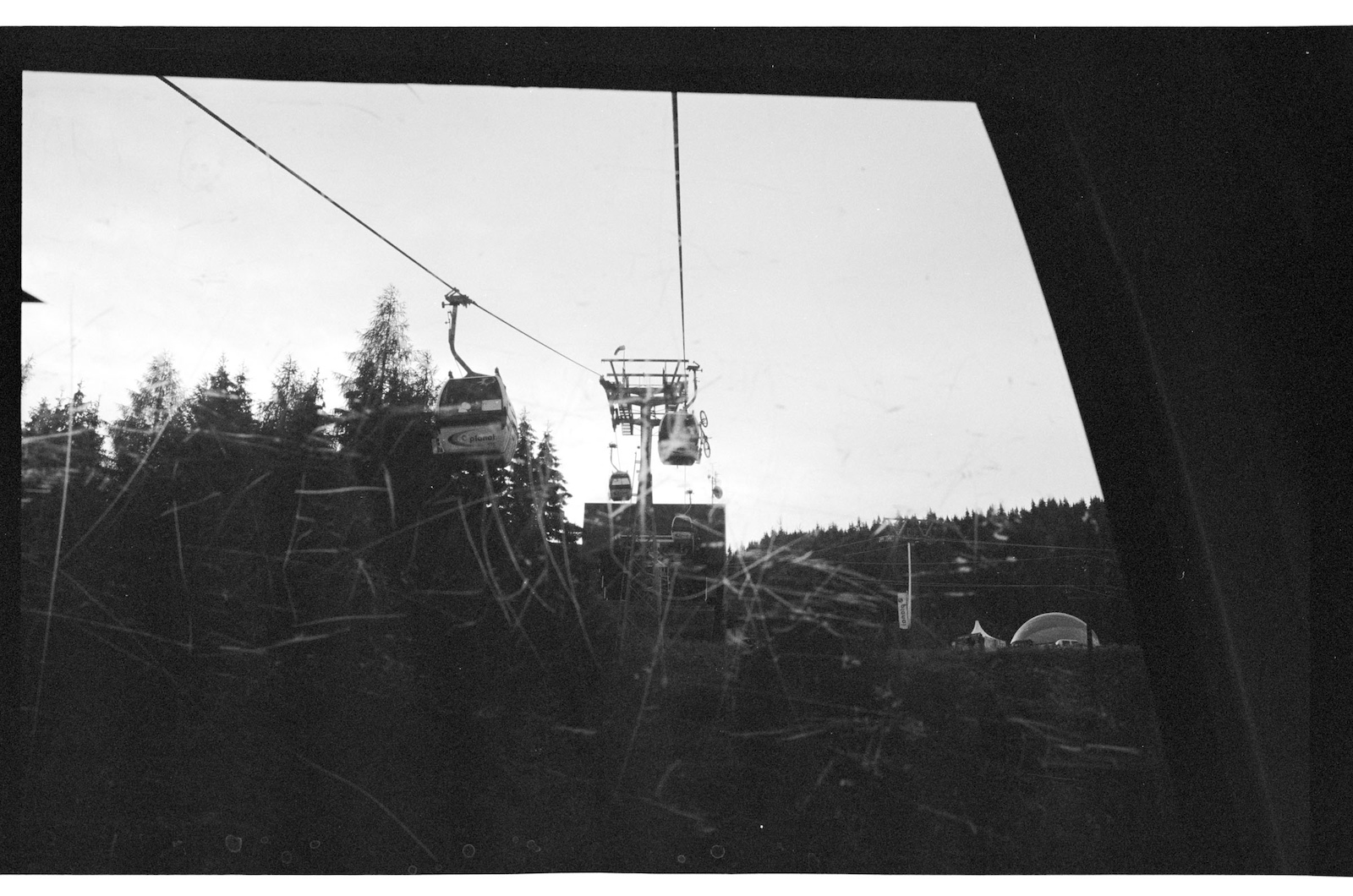 Shooting the World Cup was my business and I knew this shot would never make money. 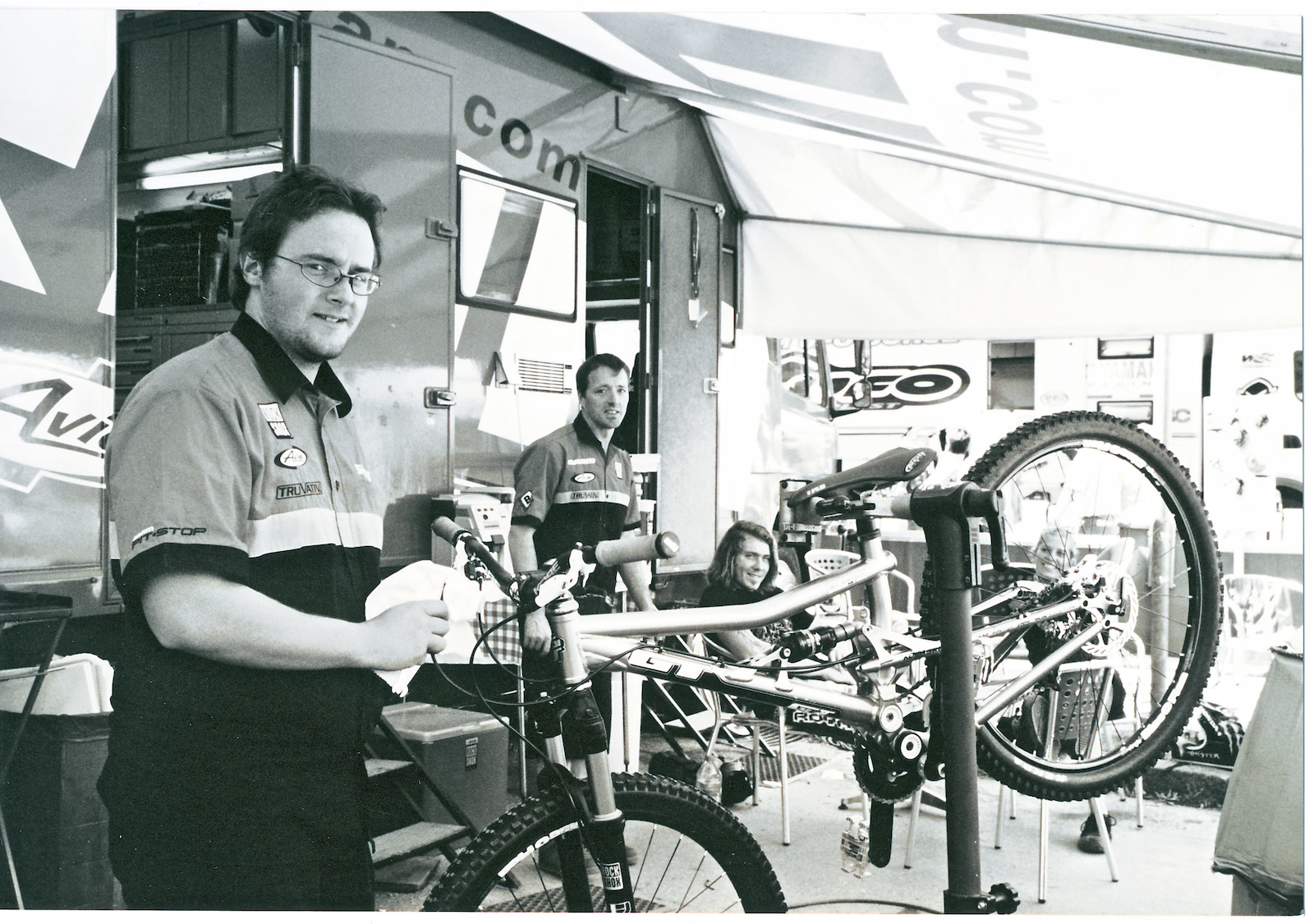 The LEICA put me in the position of an observer, watching other people doing their job. 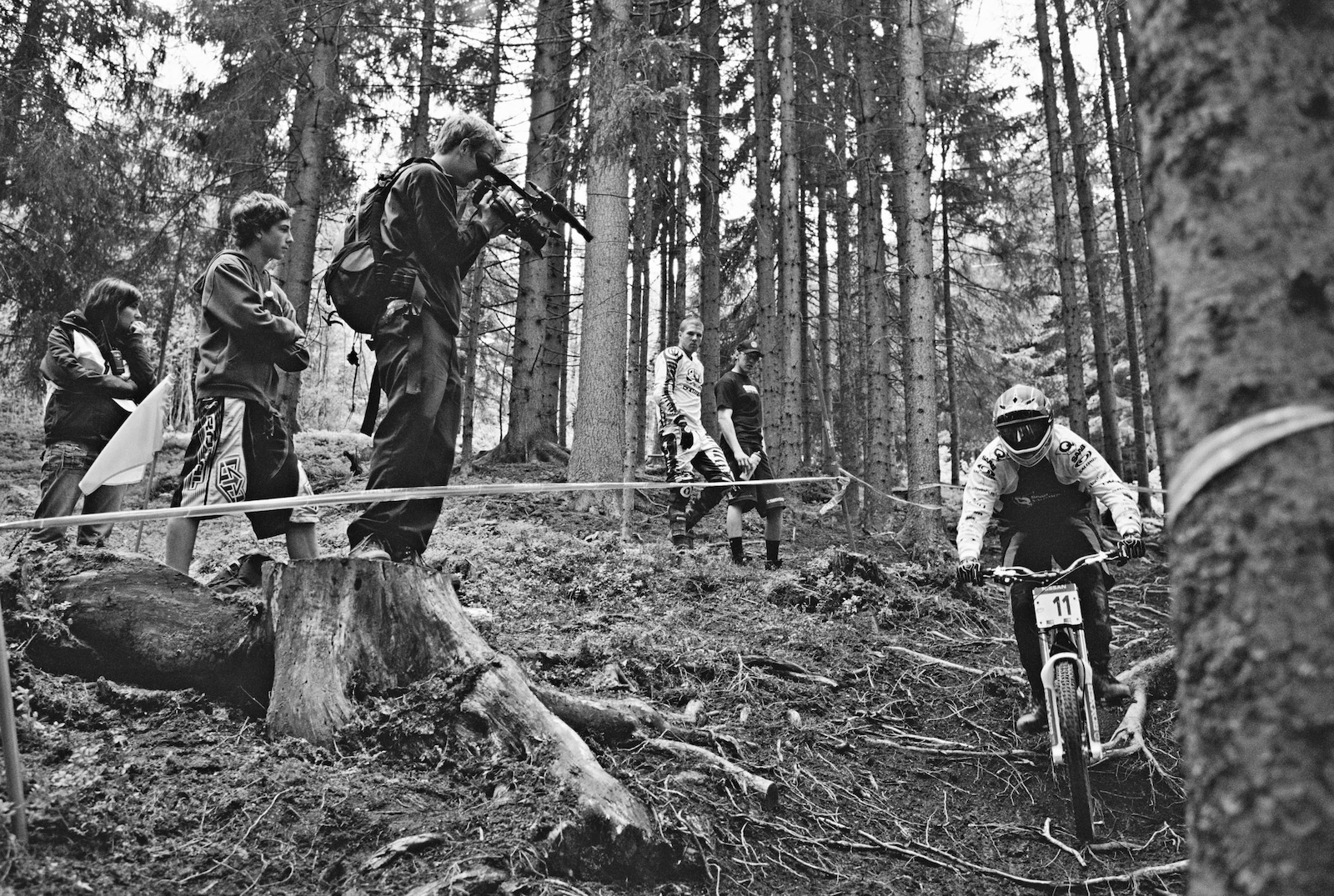 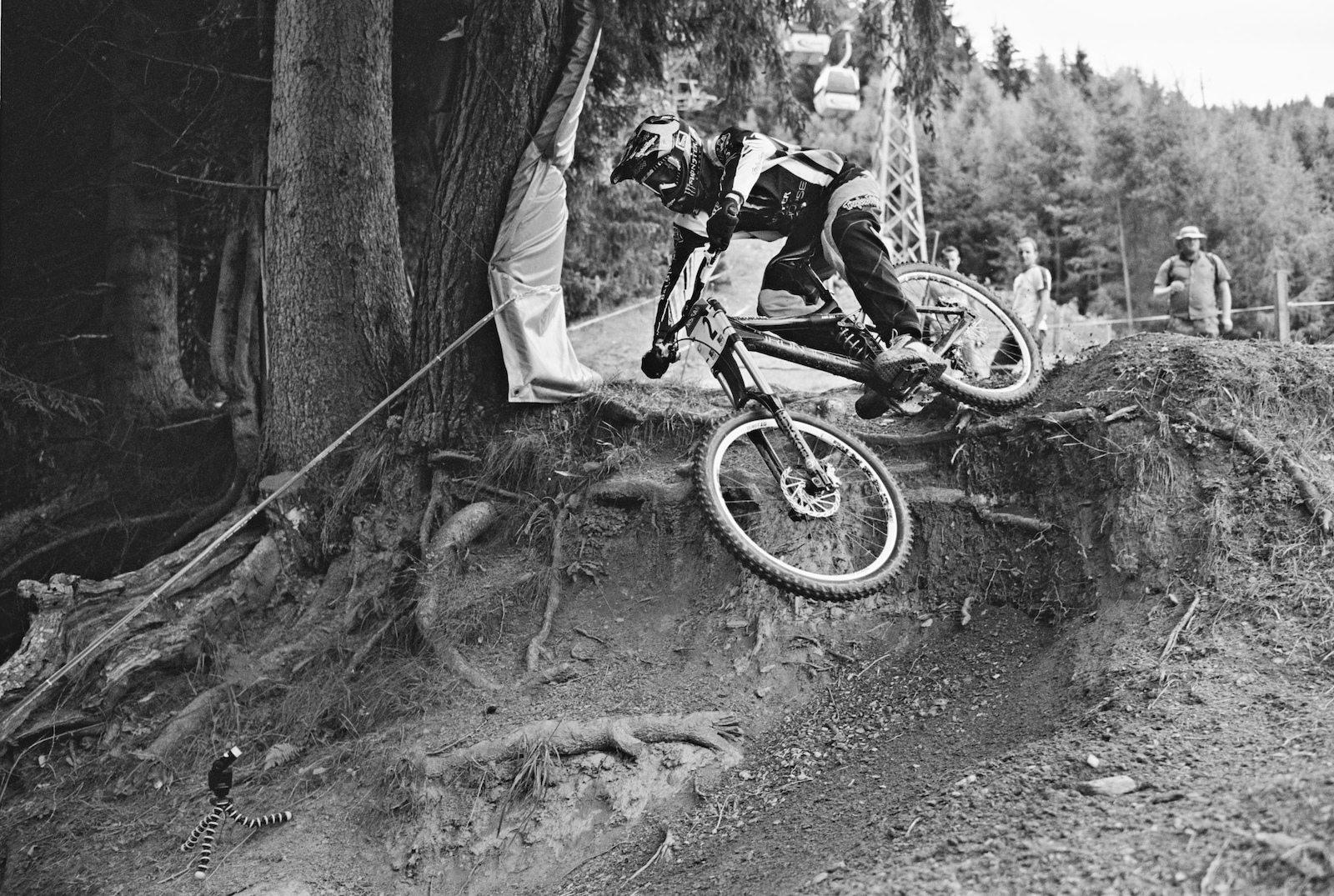 Sam Hill on his Iron Horse ripping the Schladming course. He took the 2007 overall win. 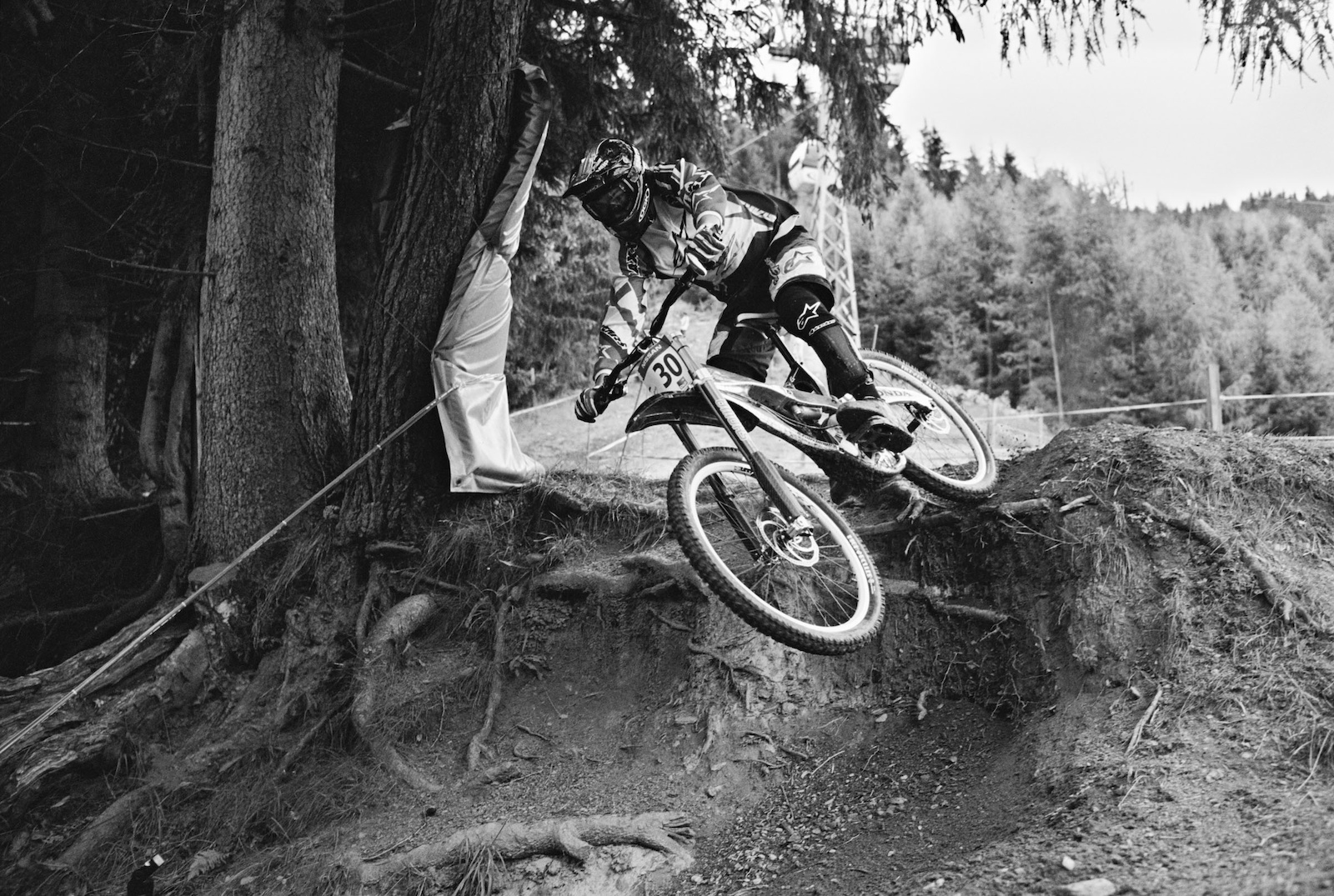 Look at Ratboy Josh Bryceland. Steve Peat was Number 1 at that time and who would have guessed Josh would follow him to the top only 7 years later in 2014. 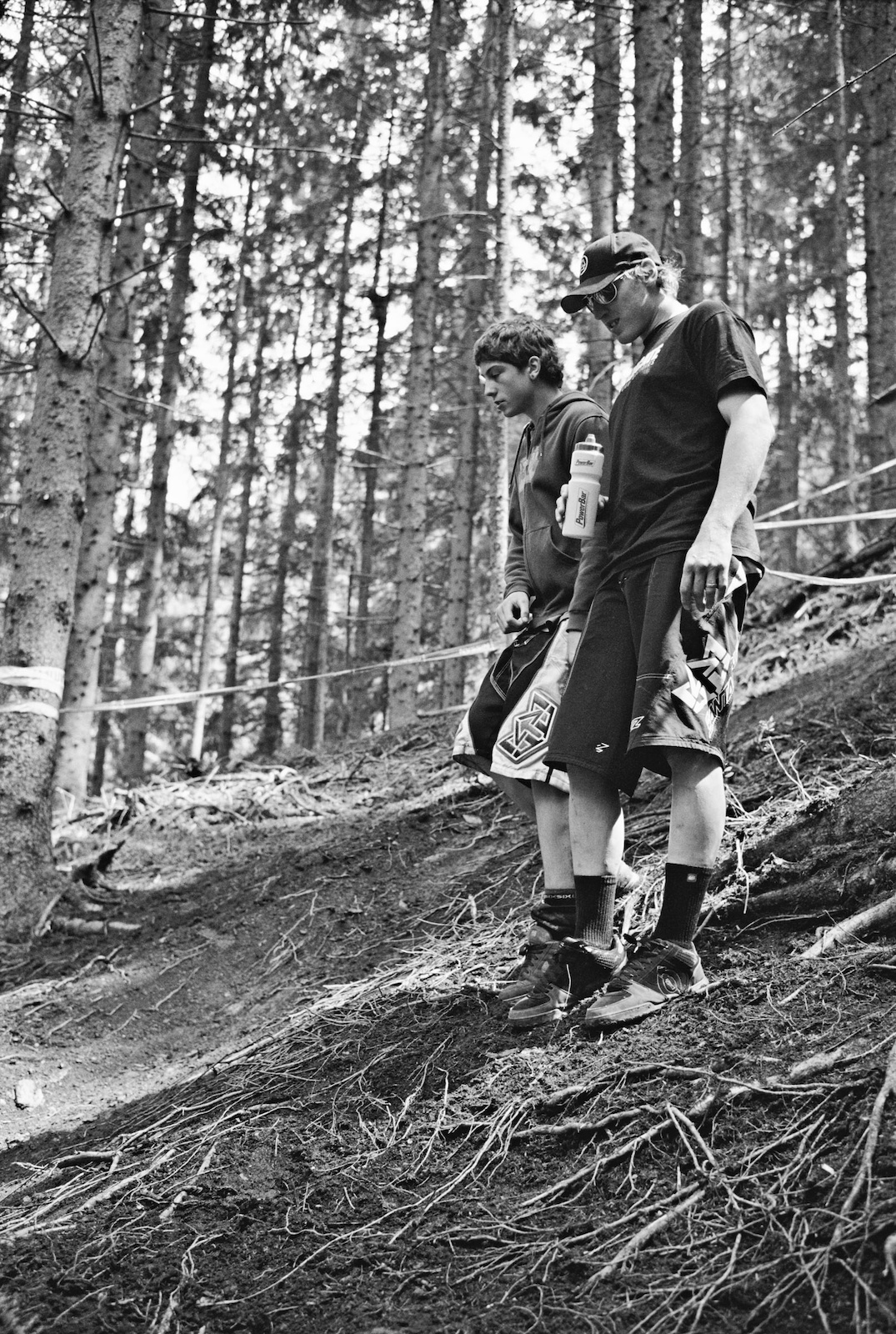 Nico Vink is still one of the coolest riders to watch.

This is for the tech nerds, does anybody know this NICOLAI model? 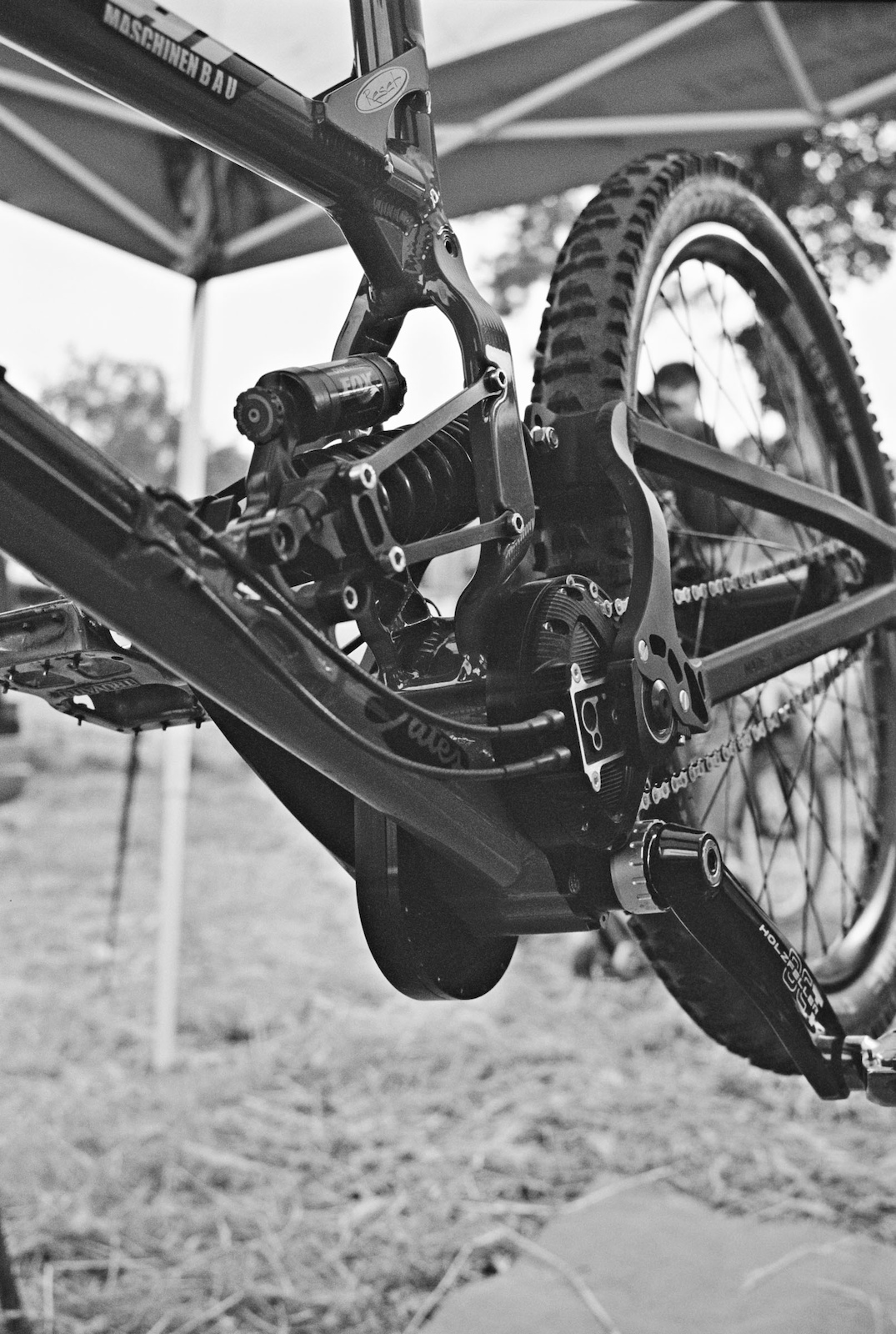 The 2018 season kicks off soon, with new teams, new riders, and new bikes. I'll go through my 2008 archive and will tell you what was hot 10 years ago. Stay tuned.

No EXIF 5 - Slow down photography

Vrechek (Feb 11, 2018 at 0:35)
Great stuff! One of my favourite season! That picture of Hill from Schladming gives me goosebumps. I was there...f*ck how he rode that track. Hill + Iron Horse = the pefrect match. Great times!

usmbc-co-uk (Feb 11, 2018 at 0:13)
Good read, brings back some memories! In 2007 nine of us chipped in an bought a knackered LDV mini bus to do a 2 week alps road trip, we hit the Mega and I remember your pics of the race from BITD. I really feel for people who dont ride bikes, missing out on stuff like this!

IllestT (Feb 11, 2018 at 12:22)
@GrandMasterOrge: Big Red (RIP) was one of 3 over the years. She was the only one to do multiple years.
I think 2007 was the year of the blue Dutchess, a low top convoy. Its special feature was fully working brakes (non of the others had)

justanotherusername (Feb 11, 2018 at 1:11)
Being a DH bike I'm not sure about that anymore... talking to someone about DH sales figures they are looking pretty bleak nowdays. Doesn't mean I wouldn't want one.

pinnityafairy (Feb 11, 2018 at 6:32) (Below Threshold)
@Racer951: that's because today's high-end lightweight downhill bikes are Enduro bikes. Ever since I have built myself a good quality high end Enduro bike my downhill bike only collects dust.

WAKIdesigns (Feb 11, 2018 at 6:36)
@properp: your dh bike collects dust because you live on Florida, ya e-bike holocaust wishing dummy

loopie (Feb 11, 2018 at 10:18)
Speaking of RN01 and Electric....Look at it. It could be made 100% electric and look exactly the same. You wouldn't be able to tell the diff....and I even bet that most of the same people who have raved for yrs about how killer that bike looks...would declare it one of the ugliest bikes ever if it were released today, as electric. Motor replaces the gear box and batteries in the fat frame section......lol

WAKIdesigns (Feb 11, 2018 at 12:40)
@loopie: it’s like back in 2005 if you showed up with a pimped up hardtail with 160 fork people would call you an idiot, who can’t undsrstand that fullies are better. But these days such bike instantly guarantees you a status of an amazing rider who knows what the real mtb is about. Just wait for front mechs to get back in fashion after Sram went full retard with the dinner plate

@properp, hes it would be cool to round up a few e-bike owners ad cut their ankles to give them a reason to need one. Or let’s just dig a big hole, throw them inside and bury them alive. Or cut some heads off by the beach and play bayonnet catch with them. Whatever it takes to protect our trails and nature. We’ll be riding single speed bikes called Waffen

loopie (Feb 11, 2018 at 14:57)
@WAKIdesigns: ..I hear ya.... I'm in Kamloops, Freeride lived here...all kinds of bikes flyin' thru the air over the yrs, all accepted...once upon a time. Nowadays?...buncha special snowflakes with matching socks&undies litter the landscape.

maynardle3 (Feb 11, 2018 at 17:23)
I understand how rad a great enduro bike is. I ride one about half the time. But if they were the same as a DH bike, you’d see them raced in actual DH races. I see people racing them now and then on DH tracks, but usually not. And, despite, how capable trail bikes have become, this is not a coincidence. @properp:

WAKIdesigns (Feb 11, 2018 at 23:27)
@loopie: I have other sort of memories from 2001-2005 when living in Poland and starting to ride. It was the folks in non matching clothes, gym shorts and hockey jerseys who were the most resentful and nose sticking a*sholes. They could huck from 6ft or hit a 6ft shitty double and they were carrying themselves as if they were Cedric Gracia. God forbid if one of them learned a 360 on a step up or hit all jumps on a DH comp on their terrible hardtails with half wrecked huge forks, hating on anyone who had a better bike than they had. They rode down a DH track and behaved as if they had a fully they could win a Word Cup. Doesn’t matter that they were 45sec back.

Came to Sweden, plenty of folks in matching clothing and almost everyone is relaxed and smiling. It’s hard to find an a*shole. Things changed in Poland as well. SoEnduro crowd is much nicer to be around than the so hardcore long travel ht crowd of the past. And make no mistake, it had nothing in common with brits riding in mud from those sick edits. Enduro replaced hardcore.

Or is this photoshopped?

garygrimm (Feb 11, 2018 at 19:46)
I have always wanted to own a RN01. I remember hearing about a stolen one that was sold in Germany on eBay; it was quickly recovered.
I wonder what the MSRP on a RN01 would have been?

uuuu (Feb 11, 2018 at 2:50)
Thanks for sharing! I must echo, that's a truly breathtaking photo of Hill.
I love that he came back and put his name back on that mountain after the one race he didn't win there (lost fair and square to Blenki 2-1 in 2008, but then the next year swapped those placings back around 1-2!). An era of awesome racing, and what a legend of a rider to this day.

rollbretzel (Feb 11, 2018 at 0:36)
Wow, that was a nice journey back in time! Love those b/w pictures, even though they are not perfect, they still have a very visible soul. Excited to see more!

MTB-RnD (Feb 11, 2018 at 16:52)
I rode Mick Pascal's bike a few times. His bars were always high and tilted. He bent the bars on his when young and he would jack his bars to feel like the bent bars. He also rode zero rebound...I still don't understand how he rode so fast. Rad shots and good memories.

justanotherusername (Feb 11, 2018 at 1:13)
Great shots, the picture with the Rat and Peaty thinking hard about lines is a piece of DH history and very telling - How many riders feel the need to do this on modern tracks? - Not much head scratching going on anymore.

GrandMasterOrge (Feb 11, 2018 at 9:03)
@howsyourdad: I believe he's referring to the perception that tracks have changed over the years and become less technical and more high speed with one line.

justanotherusername (Feb 11, 2018 at 11:21)
@GrandMasterOrge: exactly - Listen to interviews on dirt from Sam Hill and Peaty, they both feel the same.

But it was at least very "artistic" set of blury BW photos...

yxbix (Feb 12, 2018 at 0:14)
didnt think they were using air suspension on Megavalanche 11 years ago. Thats about when I started properly getting into MTB and didnt know shit, guess I just could not tell air from spring

d riff stayin on the forefront of fashion back in '07 with the flowing mane.

And that Nicolai — intriguing to say the least