by KoastalForest
Views: 46,584    Faves: 176    Comments: 20
Joyride started and ended as a personal project. We had a very clear idea from the beginning - show people the importance of enjoying our sport and teach them how wonderful it is Catalonia and our national riders. When the project was as wanted we looked for brands to sponsor the documentary, and we really appreciate that The Bike Village, Saracen, Intense, Livebikes and RS7 have trusted our project.

Joyride leaves the competition apart and enter to the daily lives of riders. We wanted to show not only the run down the slope, the trick over the gap... but the vibes that surround the event, the session, the moment, and whats more important... The JOY you get by the RIDE.Which after all, is the essence of the extreme sports lifestyle. 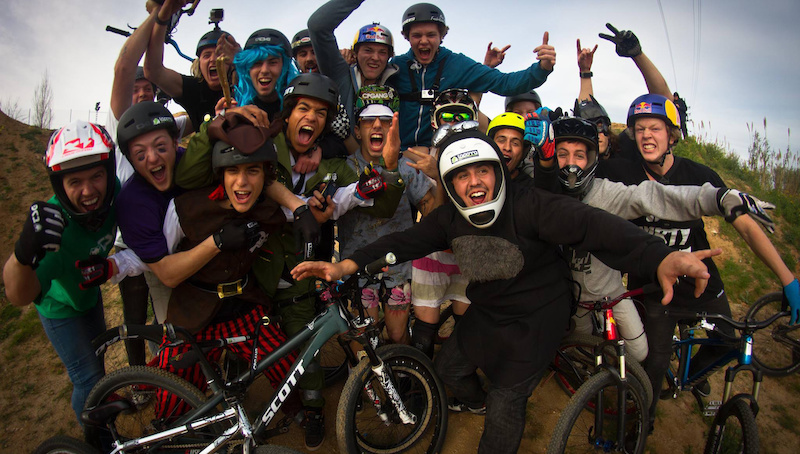 Filming in La Poma Bikepark during carnival was completely madness, this photo describes how it was.

Two weeks after that Andreu Lacondeguy won the Red Bull Rampage 2014, we filmed with him and he reviewed his year and told us what he expects of freeride in the next years.

We filmed with Bernat Via in Barcelona and Manresa. In the documentary we tried to do something different... Check it out, it's in the beginning!

In one segment we take a look at the competition with Saracen-Funn-Madison team, not from an elite rider point of view, but on a regular rider daily basis. And also we can see how a team spend their free time on a racing weekend.

Filming Enduro with Aleix Puig in Montseny... That's a beautiful place in Catalonia!!

I hope you enjoyed the film, It's my first huge project and there are some errors, but I love the experience that I had around this! THANKS PEOPLE!! JOYRIDE ROCKS!

Freegs (Dec 20, 2014 at 6:35)
For me, one of the best riding movies i've ever watched. Had very much the feel of a down-to-earth riding scene that I could relate to. Somehow captured the essence about what is great about riding better than some of the mega budget corporate flicks of the past few years.

AllridersAgency (Dec 20, 2014 at 12:28)
Agree too, finally a movie sums up the riding scene how it has grown in catalonia last decade, and now may be one of the best places to ride in Europe as Andreu said. Also great editing, photo and music band. Congrats to its creators they defenetly will have offers in near future...

kienleong (Dec 20, 2014 at 14:23)
yes, refreshing to see quality edit about the human side to riding rather than pure performance or product promotion.

ipefjk (Dec 20, 2014 at 5:44)
Bingo! Mountain biking is about FUN. Strava steals that and turns it into something else. Sorry, no thanks.

Freewheel46 (Dec 20, 2014 at 8:21)
If you use strava as a means of measuring the "quality" of a ride or to see how fast you crushed a stupid segment then you have missed the point. I know some guys that plan their rides around segments just to get a f*cking KOM on some lame ass segment. I personally enjoy using strava because without a cyclocomputer I can track how far I go and it makes nice little maps of my rides. Its amazing how a mileage goal can motivate you to ride a little further when your dead tired and get out and ride in shitty weather. But that's just my opinion.

jahspliff (Dec 20, 2014 at 12:41)
Anybody who says that Strava takes the fun out of riding, probably hasn't used it. I use it, and really enjoy seeing how I stack up against others. Just because it puts your name up on a leader board, doesn't mean you have to make it a race.

You use it and love it? Great. You hate it and would never use it? Great. There seem to be pretty strong OPINIONS on this. Hating on others in this public forum, for embracing or not this or any piece of technology or style of riding, or frame material, or wheel size etc. is asinine. Make a reasoned and supported argument if you so please, but the rants really serve little purpose other than to troll.

nohyphens (Dec 20, 2014 at 13:26)
i think the video does a great job of showing where different riders get their motivation. the strave mention isn't even 10 minutes into the film.

nimmo (Dec 20, 2014 at 14:03)
There's nothing wrong with a bit of friendly competition between riding buddies. I pitched the idea of having a 10 day challenge to see who could rack up the most distance covered, elevation gain etc come Spring time and all thought it would be fun. The 'winner' gets post final ride meal. I can only assume those so greatly against it also support children's sports teams not keeping score.

I got my first mountain bike in 1984. I had been racing road bikes for years and thought I was enjoying it, but wasn't. It was competition ever ride. There was no joy. It was just riding to be the fastest, every moment of every ride, all the time. I had "No Pain - No Gain" stickers on my stem for motivation. One ride I had a serious crash that destroyed my bike, put me in the hospital for a week, kept me in a neck brace for months, and without a sense of smell and taste for years. That was when I got my first mountain bike, a Bianchi Grizzly. Fully rigid, welded steel bull-moose handle bars, bear trap pedals, and a hite-rite. It was the most awesome thing ever (at least at the time I thought it was). I rode this bike as I recovered and as I did I rediscovered the actual joy and fun in riding a bike.

I had a new road bike built by a local custom builder, rejoined my team, and went on to race many seasons after that. No matter how well I placed there was never any joy. It just wasn't.... fun. After a while I sold the road bike and switched to mountin biking full time. So when I read the sub-titles in this short film and how riding isn't fun any more, how it used to be when they'd ride together and be happy, now with Strava they're always racing, by themselves, never waiting for their buddies, nervous.....

You know what, if Strava looking over your shoulder is what you want then more power to you. Seriously, good for you. I hope you get what you want out of it. It probably is an awesome training tool. Helll, if it had been available back in the day I'd have probably used it too. But not when I rode my mountain bike. I'm entering a couple races this summer. I'll train my best and what comes will come. I do know one thing. When I do ride my races I'm going to have fun.

Oh, as for kids games and winners/loosers: I'm all for it. I'm so sick of the pussification of todays world, but thats for another conversation.

Now has anyone seen my cane? I need to hobble off to my SB66, go out and have a fun ride.

The-Catalan-Rider (Dec 20, 2014 at 6:25)
I have really enjoyed it! I'm very proud of all this riders from Catalonia wich have such a promising future! Awesome!

kienleong (Dec 20, 2014 at 14:15)
Guataisi, sounds like you have an interesting story. Just WTF are you talking about? I genuinely have no clue but am intrigued.

No you're not drunk, the thing is that Nazi propaganga and censorship is relentless. Replies against all the political BS that idiots like the-wanker-rider vomit every day are banned.
Hey Pinkbike, you better control this gang of catalan fascists you have on your payroll.

guataisi (Dec 22, 2014 at 6:55) (Below Threshold)
I'm so proud that my previous comment hasn't been removed, but it's still not enough. What's happening on this site is what's going on in every fascist dictatorship. The moment you Pinkbike allow political comments and derogatory words against any country, you've got to allow replies, you know, and you can't tell me now that I can't reply at any moment, because that is called censorship. If they insult me, I insult them. It's that simple. Yeah, too bad this is becoming a political landfill, but sorry I have not started this shit. Again Pinkbike, you better control this bunch of catalan fascists who are on your payroll.

lluc999 (Dec 22, 2014 at 12:29)
I don't understand you very well, you are agree or disagree with the right to decide that the catalans demand??
Although, this site is not for talk about political problems ehh!!

metong (Dec 20, 2014 at 3:06)
Well done. Regarding enduro, many people were doing it before but the bikes they were using were called/categorized as ALL MOUNTAIN. Anyway....lets just call it mountainbiking.

flipoffthemonkeys (Dec 20, 2014 at 12:38)
awesome bit of video. i think it's just beyond cool that people are able to share their scenes-wherever they may be- with the rest of the world on a forum like PB. thank you PB, and to all you potty mouthed spaniards i say MUCHO GUSTO! thanks for sharing, loved some of the music choices-gloryhole-fucking awesome! hasta la vista pendejos!

radioinactiv (Dec 20, 2014 at 13:16)
best mtb film ive ever seen. "forgive yourself. breathe. and enjoy the ride" - these are guidelines to life in general! don't resent the past and just live the moment and be happy! if somebody knew absolutley nothing about mountain biking, this video would be a great way to show them what its all about. also, so many of those kids were rippers! - forgot to mention that at around 24:00, that jump is gnarly!!!!!!!!!!!!!!

thought that was part of "dont do 101" for being in the mountains?

AllMountin (Dec 20, 2014 at 15:32)
I think it's great that they made an entire film using only our challenged citizens. Poor lads can't speak a single coherent word, but god bless 'em for trying.