Juice Lubes was born in the UK - a brand that grew out of the need to alleviate stiction from grubby DH forks. In less than five years they have grown in to a global brand, with one of the broadest high performance lubricant ranges on the market, including cleaners and fluids - all designed and manufactured in the UK. Founder Will Miles says, "I don't think any other brand offers the same range of products that we do and we are the newest lube brand to the party - as far as I know." Juice Lube's aim? To keep you lubed up so you can ride as hard as you can while having fun. 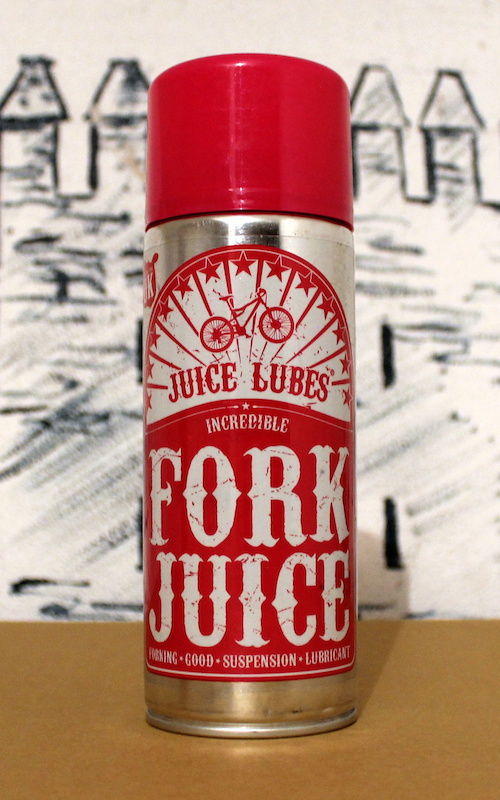 Fork Juice is a silicone-based spray lubricant and the product that launched the company. With tens of thousands of units sold, Fork Juice can be spotted in the back of many racers' vans at British downhill venues. The spray is directed onto the fork stanchions, dust wiper seals and shock or dropper post shafts, where it instantly improves small-bump sensitivity and breakaway points by reducing friction. Reportedly, Fork Juice also repels dirt and moisture from getting in to your seals, which prolongs expensive service intervals. I asked Will why he thinks his Fork Juice is superior to any other brands of silicone on the market he replied: "Quite simply, we put more oil in the can than competitors. The concentration and grade is also higher, with a higher lubricating affect. As with anything, you can use cheaper, lower quality for less performance, or higher quality for more performance, but inevitably, at a higher price."

I generally just use one quick spray on fork stanchions, the shock and in my dropper-post before each ride - after a quick wipe of any grime on the seals. I have a dropper post that is at least one year past its service interval, and after washing the bike it will drop slower than a balloon. Literally, one spray of Fork Juice, a few bounces up and down, and it's back in action until the next wash. Avoid getting it on your brakes, as they will become super slippery too. If you do, Juice Lubes also sells a disc brake cleaner. A can of Fork Juice used a couple of times per week should last a year. Volume: 400ml. MSRP: $16 USD/£10 GBP.
Fork Juice 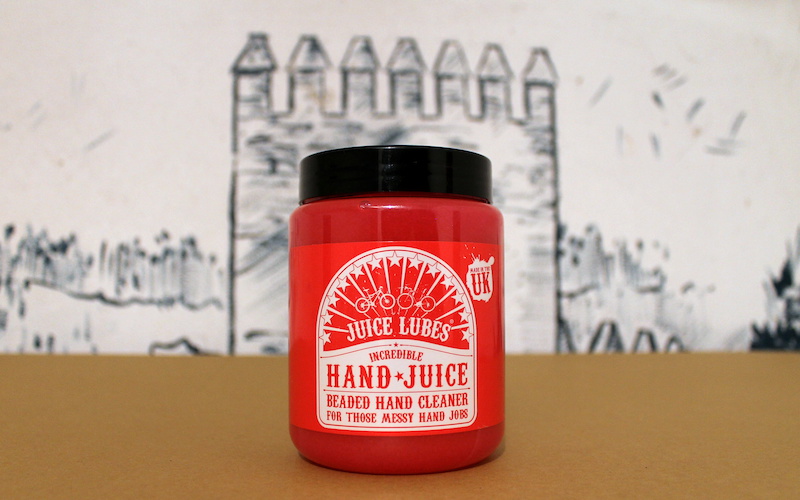 Juice Lubes say their Hand Juice is beaded for your pleasure. The abrasive-based hand cleaner is not as aggressive as similar products on the market, plus the Fruit Salad aroma is pleasing. Generally, I try to avoid the tools and leave it to somebody who knows what they are doing. So, the Hand Juice stays in my garage, which is also a long way from my sink. If my hands are starting to get greasy, I'll normally rub some on, then wipe off with a towel, which seems to keep grease from becoming ingrained in to my skin, and makes it much easier to wash when I make it back inside. Also if I get fork oil or brake fluid on my hands, I will use the Hand Juice, rather than letting it burn my flesh while I finish of the job. If I wasn't such a spanner dodger, I probably would have got through a lot more of the stuff. Volume: 400ml. MSRP: $12.50 USD/£7.99 GBP.
Hand Juice 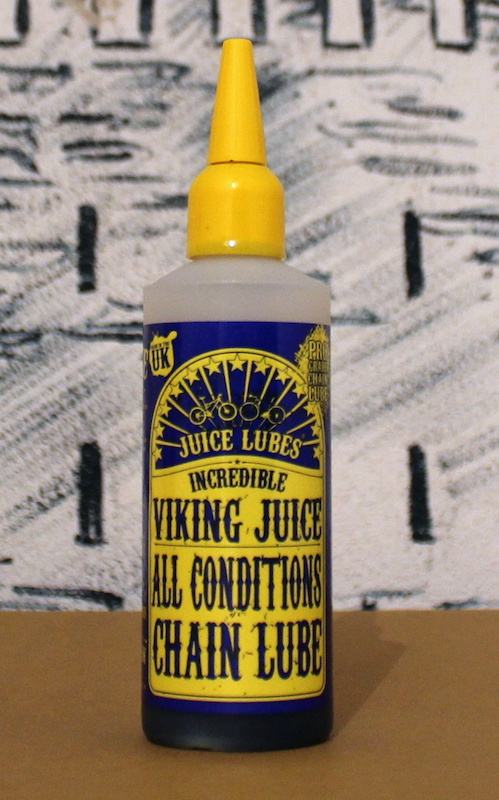 Viking Juice is claimed to be the most advanced and long lasting chain lubricant on the market. Originally designed to endure the full 280km of the infamous Paris-Roubaix - over the cobbles, under the rain and to suffer the power of Tour de France stage winner Magnus Backstedt. Viking Juice has some specific instructions if you want the best performance. You must thoroughly clean and de-grease your chain, wipe it dry, then apply up to four very thin layers of the lubricant, allowing a few minutes between each coating to dry and set. Adding to the process is that Viking Juice is a thin, runny lube, so you'll need so go easy on the application or it will end up all over your garage floor. Will that Viking Juice performs well because a special solvent is used to reduce the viscosity of the ingredients that make its waxy, solid film. The solvent thins the product to help penetrate the chain links and pins and it then evaporates, leaving the tough, protective film."
.
Although a trip to North-East France to test the Viking Juice at its proving grounds would have be nice, a Portuguese mountain sufficed. The lube lasted three to four days of 1000-1500 meter climbing, both on and off road, with the addition of an equal amount of vertical descending. It lasted well, really well, in Portugal's rainy autumn weather, and the expected hassle of hyper cleaning the chain amounted to an easy add-on to our frequent bike cleanings. Viking Juice is a little more time consuming than applying a regular lube, but if you have the patience in the workshop, it will reward you in the long run. Volume: 130ml. MSRP: $16 USD/£10 GBP. Viking Juice

Look out for the handy 'How-To' videos on their site at www.juicelubes.co.uk

george444 (Dec 4, 2014 at 2:39)
I used fork juice and contacted mojo they were saying that it dries out the seal. Im not saying its a bad product it gets all the crud out but mojo dont reccomend it as the oil in the fork reacts with it! Dont know if anyone else has heard of this...

strickland-propane (Dec 4, 2014 at 10:15)
I'm glad you brought that up because I remembered a suspension tuner(I forgot who) discouraging the use of silicone lubes for suspension. I just wasn't sure who or why.

And the lubrication should be done by the oil inside the legs ?

nikoniko (Dec 4, 2014 at 5:44)
True true, but not all forks and most of the current forks don't have an open oil bath system lubing the seals. Most fork on the market now grease the seals on assembly but there is very little lube sloshing up to the seals. Dust, rain and other elements make both your seals and stanchion tubes dry, so they need some grease or just a wipe of fork oil, then you cycle the fork and wipe off the grime with the excess grease. You just might notice a smoother improvement! RideOn!

cgzasv (Dec 4, 2014 at 7:33)
if you have issues with lubrication then your bushing would be damaged which is far worse than little oil on the seals (BTW you don't really needs to lubricate the seals as there are the foams under it which do just that - and the oil there is mostly to keep dirt out).
In any case servicing the lowers is a very easy task that can take less than 1/2 an hour (including a beer stop), and full service to the fork is less than an hour, so why not doing it every couple of months and not relay of this worthless "fork lube"?

strickland-propane (Dec 4, 2014 at 10:12)
If I remember correctly, some manufacturers' take on the best sliding surfaces is that it should not be as microscopically flat as possible. Allowing SOME microscopic porosity(or whatever the correct word) will hold lubricant or the coating more effectively. There's a difference between the grease you put inside your seals and suspension specific lube that you put on the external part of the fork. It shouldn't be slathered on grease, but something that bonds to the surface of the stanchion.

campawsome (Dec 6, 2014 at 11:56)
Anyone use the Finish Line stanchion lube? It's a Teflon/fleuro Oil mix and comes in a tiny bottle. Makes Everything very slippery (eg your gloves even after a good wash).

I like it, and have been using it on my Wife's 888 for two years and that thing is LONG past service but still feels buttery smooth. It's a very controlled application so you do t have to worry about getting it on your rotors.

Anyway- I just ran out of the stuff and was going to repurchase, but would be interested in trying this out if it's comporable.

nigeJ (Dec 4, 2014 at 1:17)
Been using the Fork Juice for a couple of months, and the before/after effect is pretty noticeable. Well worth a punt.

Blaenavonbutt (Dec 4, 2014 at 14:47)
Fork juice definitely makes the fork smoother and even after washing the stantions are super smooth. I've been told by a local tuning company not to put it on the seals also, so I just use a little fox fork oil.

notthatfast (Dec 5, 2014 at 3:13)
Presumably they're beads of plastic in that hand cleaner? That stuff is really bad for the environment...

Ridonkulus (Dec 3, 2014 at 21:35)
Should update the site link to www.juicelubes.co.uk
Below threshold threads are hidden