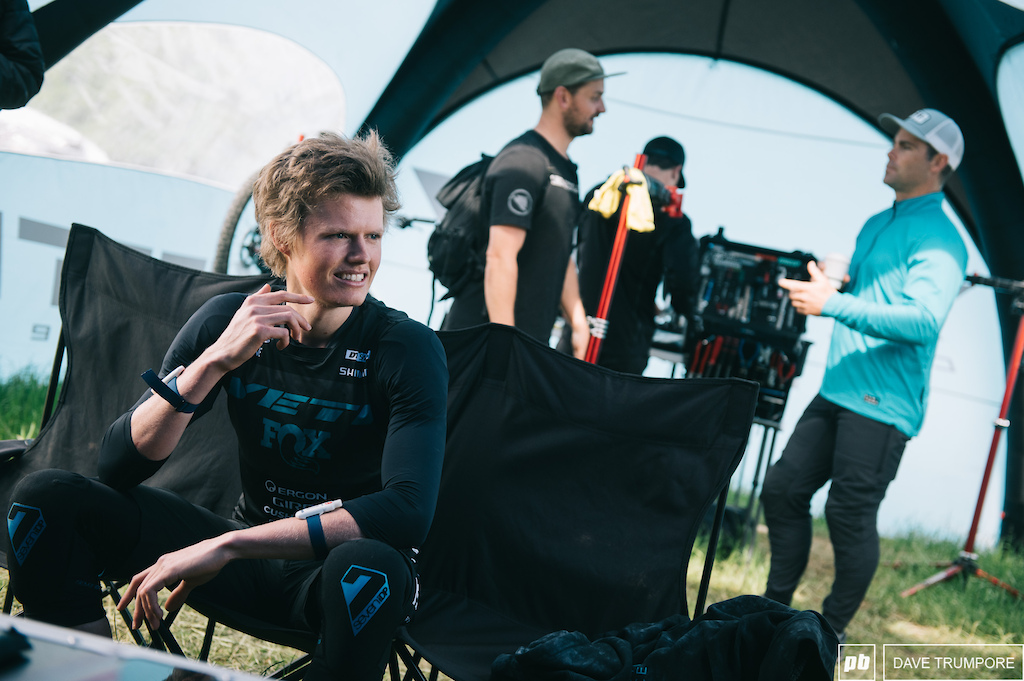 Squamish local and Yeti EWS pro Kasper Woolley announced on social media that he won't be racing in Whistler after colliding with another rider while at a pump track.

In his Instagram post, Woolley says, "a guy dropped in going the wrong direction and ran into me full speed in a corner," and that his list of injuries includes a broken and dislocated jaw that's now wired shut for the next four to six weeks. He also suffered a type 3 occipital condyle fracture, which refers to the articulation between the base of the skull and the cervical spine and sounds incredibly serious. This comes only a few months after his big crash on Stage 2 of the Tweed Valley EWS that resulted in a stable T6 vertebrae fracture, a fracture on the scapula, and a concussion.

Kasper is one of the most exciting young racers, as well as a Squamish local, and we're hoping he makes a quick and full recovery.

Remember to look up, before you drop in.

adrennan (Aug 5, 2022 at 16:31)
Where is the land of directional pump tracks?! Everyone I ever see is multi-directional chaos and you have to keep your head on a swivel. Rough luck.

dirtpedaler (Aug 5, 2022 at 17:02)
If this is the one at fitzsimmons creek by the skatepark and dj's there is an elevated start and the track is downhill. Riders have been known to start on the bike path and hit it backwards/jump into it with momentum, which might be what happened.

AndrewHornor (Aug 5, 2022 at 19:33)
There is a directional pump track local to me. Painted arrows and signage make it very clear. Still always going to be kids stopped or whatever though

adrennan (Aug 5, 2022 at 20:34)
@wake-n-rake: not trying to take away from the bummer of a situation by any means. I basically got to the point I only ride pump tracks before 830 in the morning for safety reasons.

lostlunchbox (Aug 5, 2022 at 22:12)
The direction of use is defined by the users. But if someone is already on track its pretty shit to drop in going the opposite way. Which is how I read the story.

I've never seen a pump track that had a 'direction'. I guess as they are becoming more popular they are being designed this way for safety, maybe. Good idea. BMX tracks are hella fun and you don't have to worry about this scenario.

Frowzy (Aug 5, 2022 at 17:34) (Below Threshold)
No way it was directional he is just isn’t gonna take any responsibly for it happening 100% the other riders fault in his opinion

quinnltd (Aug 5, 2022 at 20:22)
Pretty much all the new ashphalt ones going in have an intended direction with arrows painted and the velo ones I've been too the corners work better if you follow the arrows. Obviously they can be ridden the other direction but general etiquette when it's more than just you there is to follow the arrows

lostlunchbox (Aug 5, 2022 at 22:08)
It becomes directional when another rider is already using it. Which I think is what he's suggesting here.

Dustfarter (Aug 5, 2022 at 18:43)
That's f*cked! But are most pump tracks directional?
My local one has options to link all kinds of lines and head on collisions are always something to be very aware of.

Unless it was clearly a directional track it's seems a bit rough to point the blame at the other rider who presumably also got hurt.

nateb (Aug 5, 2022 at 20:02)
I’ve been teaching my son (now 5 yrs old) for a few years now not to snake people and to always look before moving in any direction when he’s at the pump track or skatepark… he’s getting it, sadly the majority of other people there have nearly zero etiquette. It’s scary.

hypa (Aug 5, 2022 at 22:33)
Whistler is a fucking gong show right now. No joke, it's the first day of crankworx and I'm almost done. People forgot how to be people over the last 3 years. Anyway, Get well soon Kasper.

jayjay1989 (Aug 6, 2022 at 2:22)
I'm reading this while sitting here with exactly the same collar attached. I was hit by a car and suffered 3 broken vertebraes. It's week 6 now and I've got 6 more to go. Heeling vibes to Kasper, I can assure...this sucks

ocnlogan (Aug 5, 2022 at 16:33)
This is brutal. Here's to hoping he (you, if you end up reading this), heal up quickly and properly. he's always been a class act, its been great to see his career progress, and start pushing the big names in EWS.

I wonder how much worse this was made by his condition (which he's publicly discussed before) that gives him more fragile bones, or if it was just that bad of an impact. Either way, that sucks.

Mntneer (Aug 5, 2022 at 17:10)
The occipital condyle fracture is very serious. The fact that he is standing and didn’t have a spinal cord injury says a lot about how lucky he is, despite sustaining very unnecessary trauma

gnarnaimo (Aug 5, 2022 at 18:15)
@melikebike74: Stevie passed head on with a friend of his when they were rushing around on Doumont logging roads trying to help an injured mountain biker. I believe Stevie was on the way back to the injured rider and his friend, while his friend was heading out to check on Stevies status. Came around a bend and collided.

There is a memorial on Doumont in the spot it happened. My friend was unfortunate enough to be the person to find Stevie and his injured friend..

homerjm (Aug 5, 2022 at 19:17)
@gnarnaimo: wow very unfortunate incident. I supposed he crashed onto the woods or something similar...Very sad.

jamesbrant (Aug 6, 2022 at 10:25)
@gnarnaimo: i remember the day, walking into the LBS (the staff knew him personally) and it was so depressing. still is.

melikebike74 (3 days ago)
@gnarnaimo: Thanks for that; I was (obviously) never too clear on it all. I guess he's on the mind more so these days with all that Finn had before him. A legendary effort in so many ways. (Hopefully Kasper is rolling again soon!)

Muscovir (Aug 6, 2022 at 1:40)
The post and article both frame the incident in a way that makes it seem like the other rider is solely to blame for the accident. Now I don’t know about you guys but literally no pump track I’ve ever been to was „directional“… Its common practice to ride them how ever you want and people regularly do exactly that. Riding such a track usually requires everyone to pay attention and look out. Obviously we all weren’t there, so we cant know what happened but to me it sounds like this stupid and unnecessary accident definitely wasn’t just caused by one rider „going the wrong way“ but by two riders not looking out. I hope they’ll both be alright.

CleanZine (Aug 6, 2022 at 5:13)
I think every pump track I've been to has been directional. You can get transfers which set you up for some parts "backwards" but they'll typically have a direction they work well in and one they don't.

sino428 (Aug 6, 2022 at 4:06)
I’m not sure they are intentionally leaving that out. Mike is simply reposting what is on Kaspers instagram. With no way of knowing who the other rider was, there isn’t really any way to get an update on their condition.

Phaethon85 (Aug 5, 2022 at 18:36)
I hope he has a full recovery. Crashing is one thing and obviously it can really suck, but incidents like this are incredibly terrifying :-/

foxinsocks (Aug 5, 2022 at 21:59)
God damnit, i feel so sorry for the dude. He's tough as nails, but this seems like one bad list of injuries. Hope to see him back swinging, he's got some serious skills!

MTB-Strength-Factory (Aug 6, 2022 at 0:57)
Anyone else quickly read the headline and think it was a 'freak track pump accident?'

boopiejones (Aug 5, 2022 at 16:31)
You get an upvote from me. My preferred line is “I hate people.” Or sometimes I’ll paraphrase norm from cheers and say “people. Can’t live with ‘em… pass the beer nuts.”

singletrackjamaica (Aug 5, 2022 at 16:47)
@jeffrocx: I upvoted but I've never seen that pump track. Is it obvious which way is right if you aren't a local?

jeffrocx (Aug 5, 2022 at 16:59)
Thanks guys, glad I can always count on Pinkbike comments for some solid, rational commentary.

. Cliff Calvin on beer and brain cells: "Well ya see, Norm, it’s like this… A herd of buffalo can only move as fast as the slowest buffalo. And when the herd is hunted, it is the slowest and weakest ones at the back that are killed first. This natural selection is good for the herd as a whole, because the general speed and health of the whole group keeps improving by the regular killing of the weakest members.In much the same way, the human brain can only operate as fast as the slowest brain cells. Excessive intake of alcohol, as we know, kills brain cells. But naturally it attacks the slowest and weakest brain cells first. In this way, regular consumption of beer eliminates the weaker brain cells, making the brain a faster and more efficient machine. That’s why you always feel smarter after a few beers.”

JustinMD (Aug 5, 2022 at 19:07)
Why there are no BIG FVCKING ARROWS showing direction of the track is unbelievable.
Below threshold threads are hidden

AccidentalDishing (Aug 5, 2022 at 16:22)
If the other guy knowingly went the wrong way, I'd definitely be consulting a lawyer. Obliviously stupid is one thing, knowingly running the track in the wrong direction when other riders are present should hurt more than just physically.

nvranka (Aug 5, 2022 at 17:59) (Below Threshold)
@handynzl: so you don’t think the s-tier idiot who went the wrong way should be held liable for every $ of medical cost + the career impact of missing races, etc etc etc? f*ck that person, drown them financially and flay them in the street I say !