Getting to Know - Kathi Kuypers

Kathi Kuypers
"I've known Kathi for some years now, the first time that I met her was at the first Nine Knights in Neukirchen/Austria in 2012. I was doing the Cow shot with Amir Kabbani and I was wearing a Dirndl dress and didn't have the right hairstyle for it, so Kathi fixed it. From there on, she was super sympathetic to me and we've gone on many adventures since like this year to Canada for 3 weeks and have become closer friends!

She is a badass woman rider; riding trails, hitting dirt jumps like the guys and even not scared to compete against them. That's what I like on her, she rides her bike whenever she can, is motivated to learn new stuff and is always having fun and that's what counts!

Kathi also knows every single slopestyler, all of the MTB movies, spots, and bike parks,... a real MTB Lady, just ask her when you want to know something about the sport.

She inspires other women to ride! What scares me sometimes about the blond Bavarian lady is only when we go out cause we party quite good and the day after we have to tell each other what happened, haha there were some good stories

I know Kathi as a big-hearted, lovely person that I love to hang out with and I wish her loads of happiness and that she stays healthy!" - Angie Hohenwarter 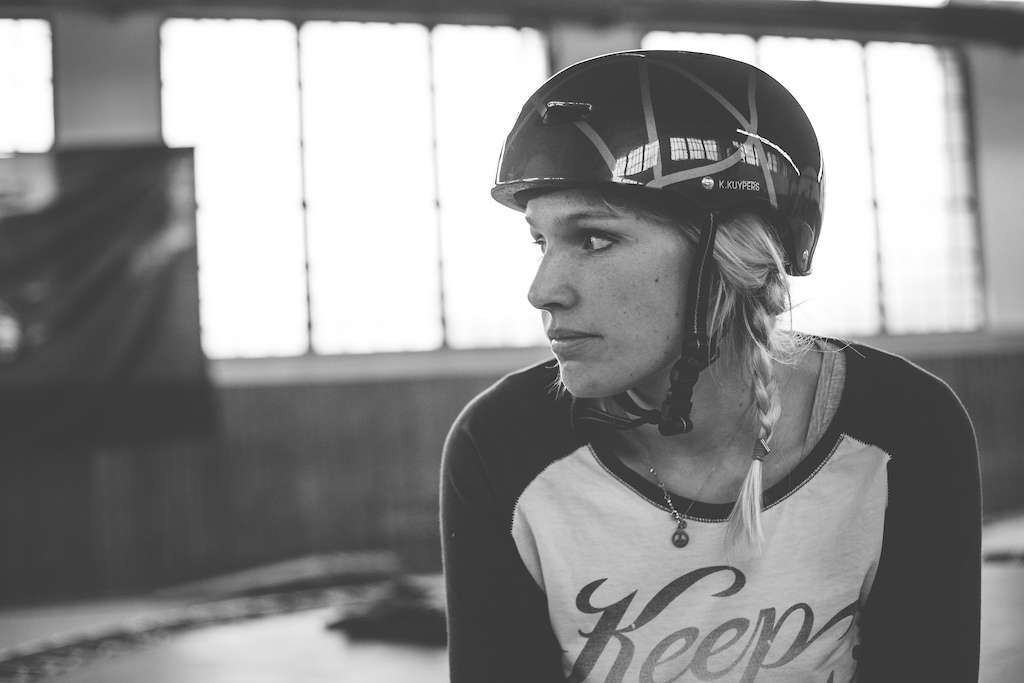 Who is Kathi Kuypers?
A feral girl chasing her dreams on bikes.

Where are you from and where do you live?
Bavaria- the southern Alps, ( the nicer part of Germany ). 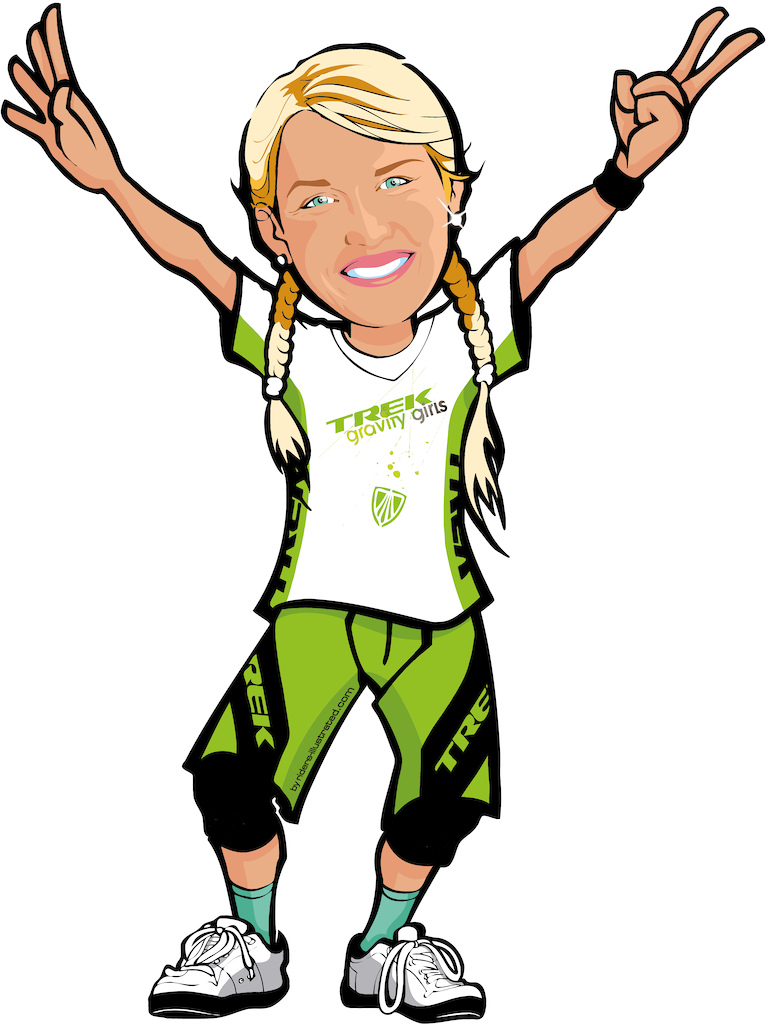 Who do you ride for?
I ride for me, myself and I with help from Trek Bicycles as a Trek Gravity Girl. I'd like to thank Trek Bicycles, Bontrager, FiveTen, and adidas sport eyewear for their help.

Where are you happiest?
I love to start my day on my trail bike in the mountains and finish it with a mellow dirt jump session and having a BBQ with some good bavarian Augustiner beer at the dirt jumps before going home.

What’s been your favourite race/contest venue?
I have never been more stoked than at my first FMB event at Bikedays Solothurn, it was my first DJ Comp and of course Crankworx Whistler. Nothing can beat the vibes that Whistler gives you!

Where are your favourite trails?
Last year I traveled to Barcelona 4 times to spend the depressing winter season at La Poma’s Dirt jumps. But nothing comes even close to riding dirt jumps which are built by the Flying Metal Crew. No matter how big the gaps are, I feel safe on those jumps.

When it comes to trails, I love to travel around the world with my trail bike and discover new places. This year, the Chilcotin trails blew my mind, I had never experienced so much flow. In Europe, I have to say that the secret swiss single tracks are my favorite.

What are your strengths?
I don't take life too seriously.

What are your weaknesses?
Double Cream Oreos!

What’s been your worst crash over the years?
I thought it was a good idea to learn bar spins and I destroyed my right knee and tibia badly. 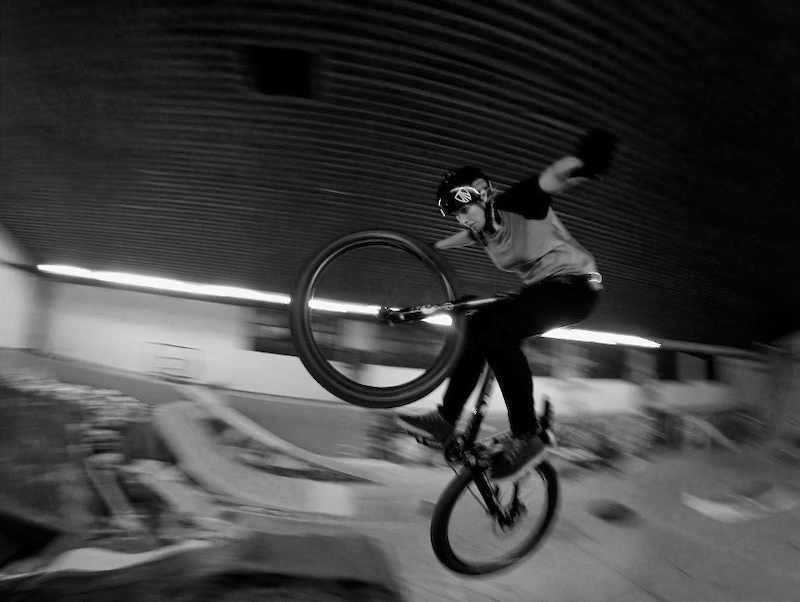 What’s been your luckiest escape?
My friends and I got chased by a Grizzly Bear in the Chilcotins but somehow he turned right and ran into another valley. I was the last one on the trail behind my friends, so I would have been the bear’s afternoon snack.

Which bike from over the years, conjures up the best memories?
I have a really strong connection to my DJ bike. It’s a custom-painted Trek Ticket with a full WWII fighter theme from nose to tail. There’s a blond pin-up girl (me) on the seat tube to support me on massive jumps as these heroic pilots back in the history had on their fighters. They often portrayed a sweetheart from back home as a painting near the cockpit to encourage themselves in the air.

I did 3 Crankworx Events (Speed and Style, Pumptrack, and Dual Slalom) on my Ticket and I mostly spend my free time on that little bike, so he’s my buddy. 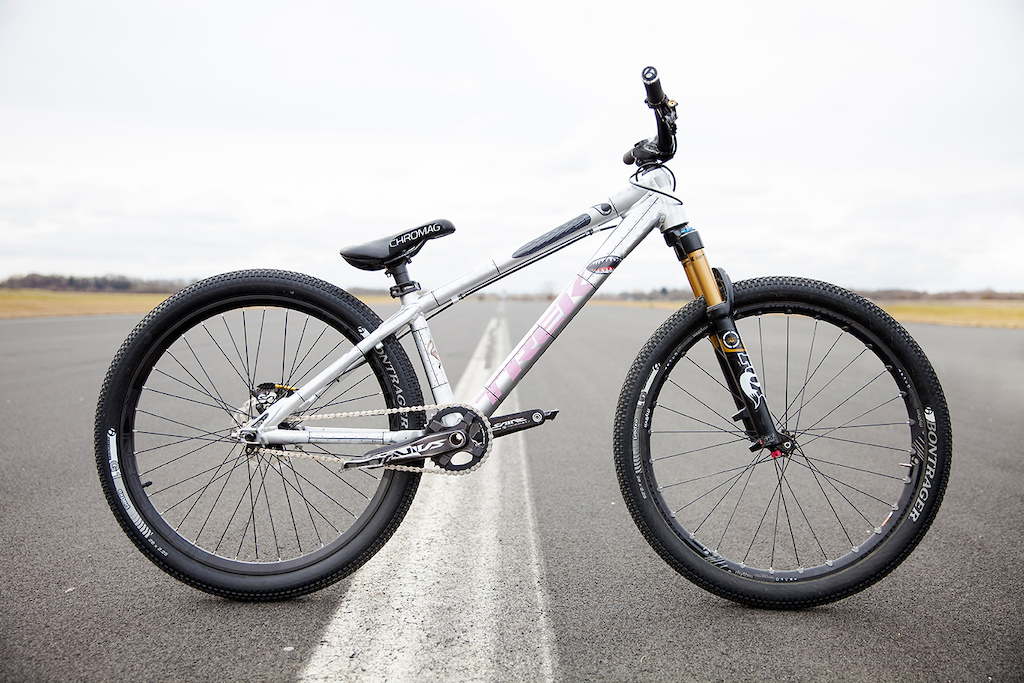 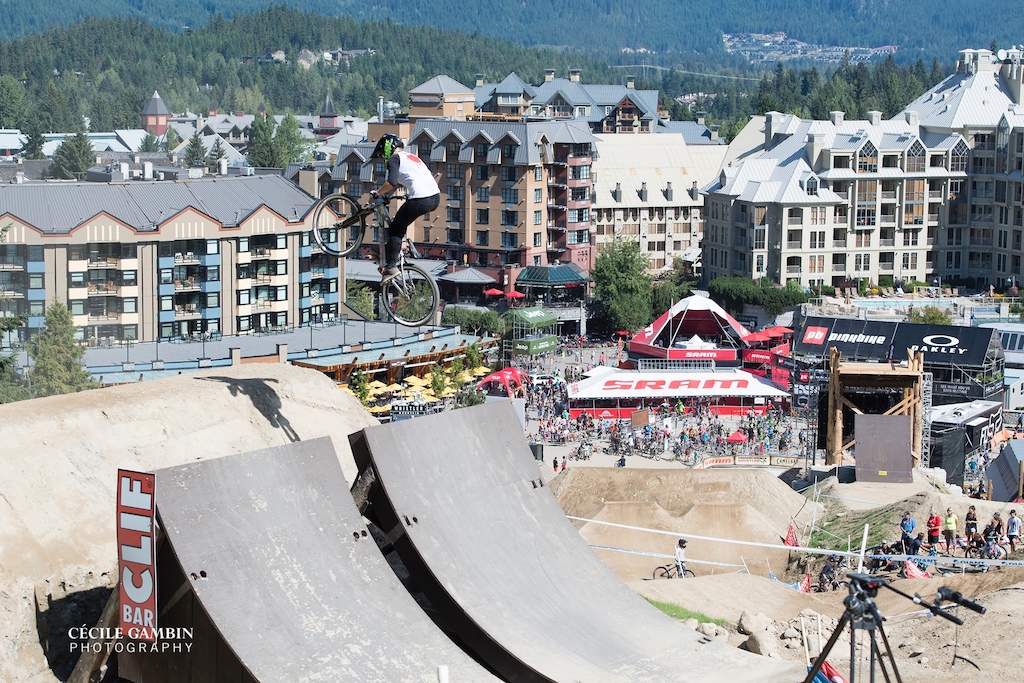 Kathi and her Trek Ticket take on the Speed and Style course at Crankworx, Whistler. 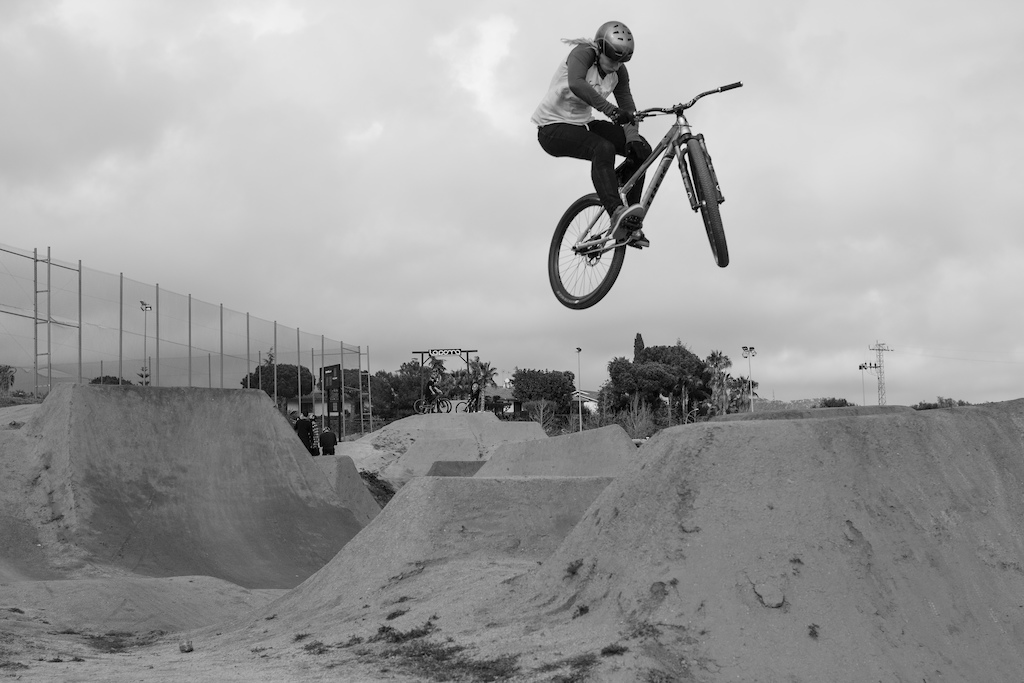 Who’s your favourite rider?
Brett Rheeder. I had tears in my eyes when he finally won Joyride this year.

Who or what inspires you?
If there is one person in this universe that I just wish to have one little talk with, it would be Sarah Burke. She has been one of a kind and inspired me to try dirt jump contests, as one of those, not even a handful of girls competing. Sarah Burke was so much more than just a successful athlete, she was a leader in the sport community, a respected media personality, and an action sports icon. She was a four-time Winter X Games gold medallist and won the world championship in the halfpipe. She successfully lobbied the IOC to have the event added to the Olympic program for the 2014 Winter Olympics. Let's be more like Sarah! #celebratesarah 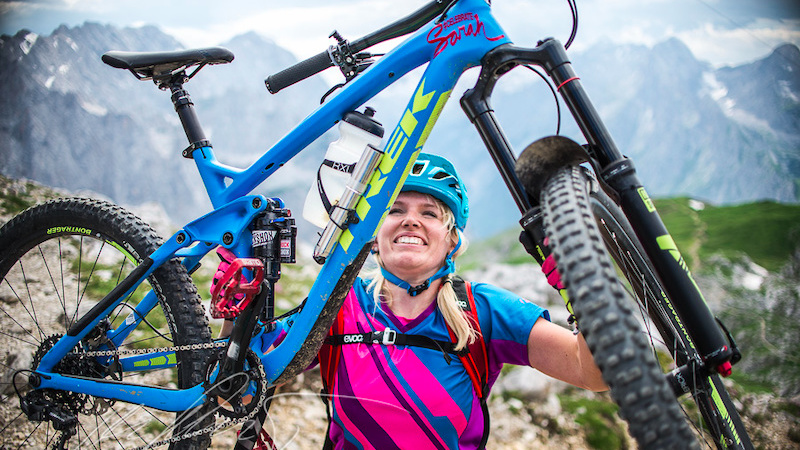 The sticker says it all. 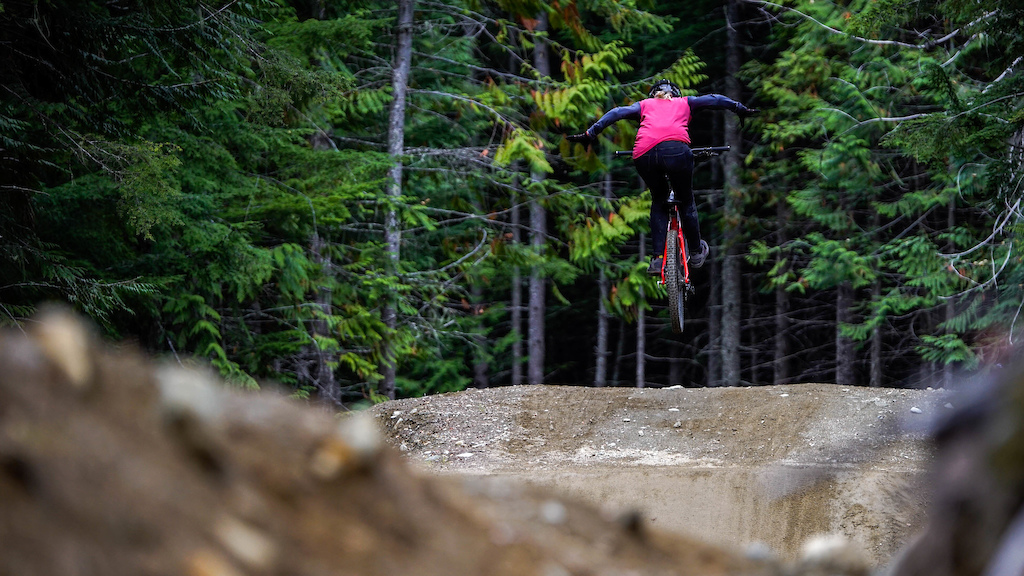 Top of the World Trail

What do you enjoy doing away from bikes?
I love traveling, getting to know people, hopping on adventures, and getting loose at parties, haha. 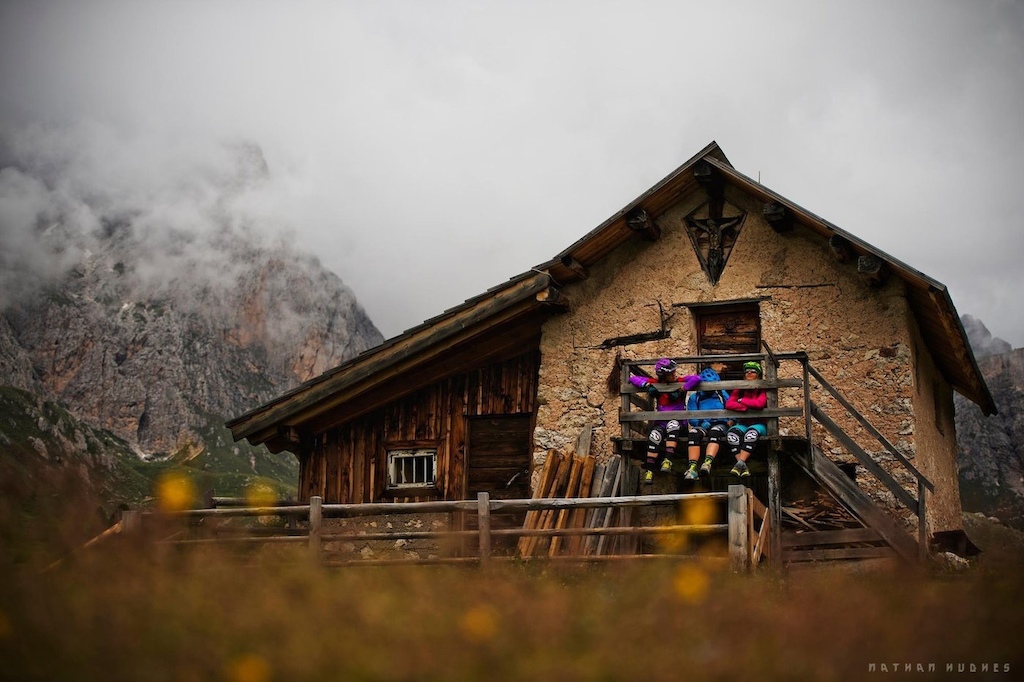 What are you listening to right now?
Morning Sun by Strange Talk.

What’s your favourite movie/ TV show?
I love chilling on the couch with my pets and brothers and watching Takeshi's castle, “Hör mal wer da hämmert” (Home Improvement) and the Fresh Prince of Bel Air. 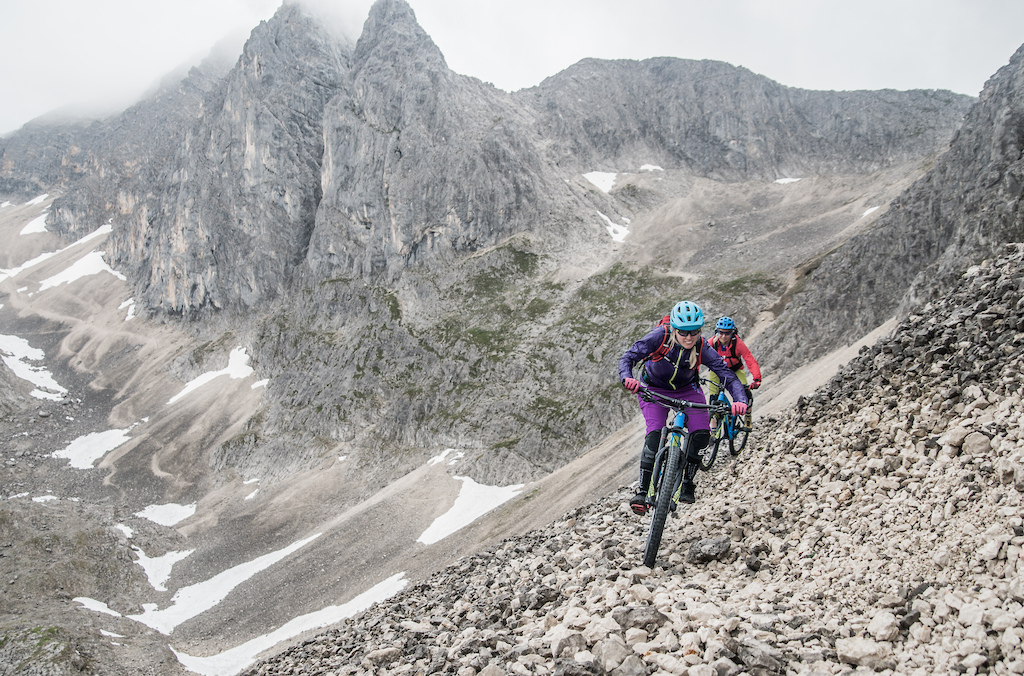 Kathi is not thinking about her favorite old TV reruns while taking in a ride like this one.

What’s your favourite non-bike website?
YouTube. Before going to sleep, I love to watch through some good advertisements, my favorites are, for example, the Budweiser ads. 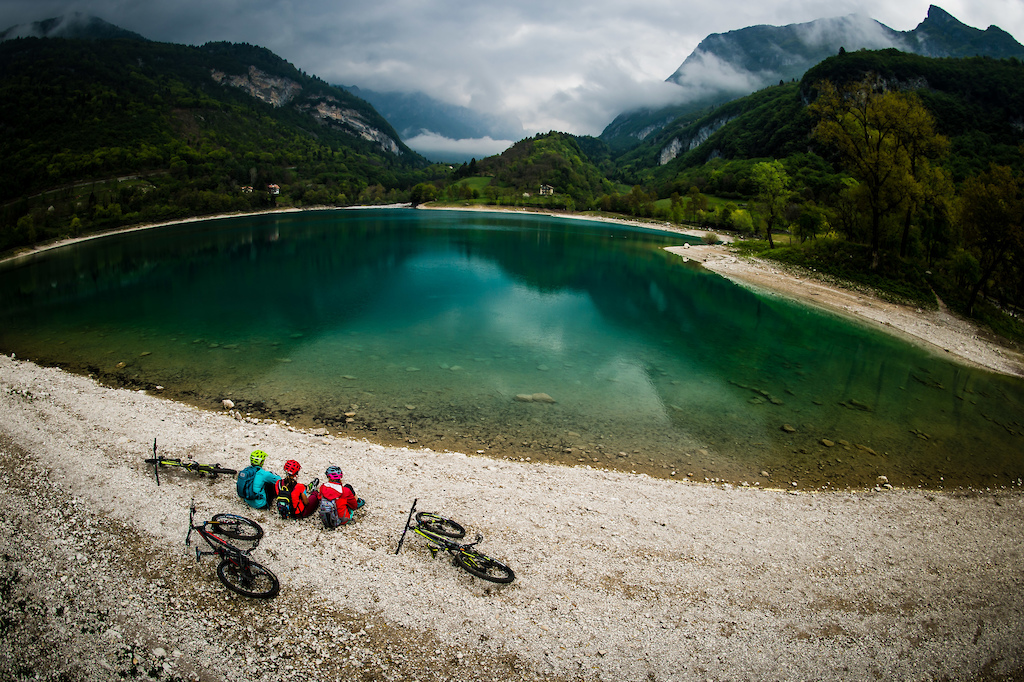 What grinds your gears?
When I'm trying to learn new things and someone who doesn't know what they are talking about starts telling me what to do. That grinds my gears.

What makes you happy?
I always have some candy in my pockets. And I love the feeling of accomplishing something new on a bike, doesn’t matter if it’s a new dirt jump line or a trick. 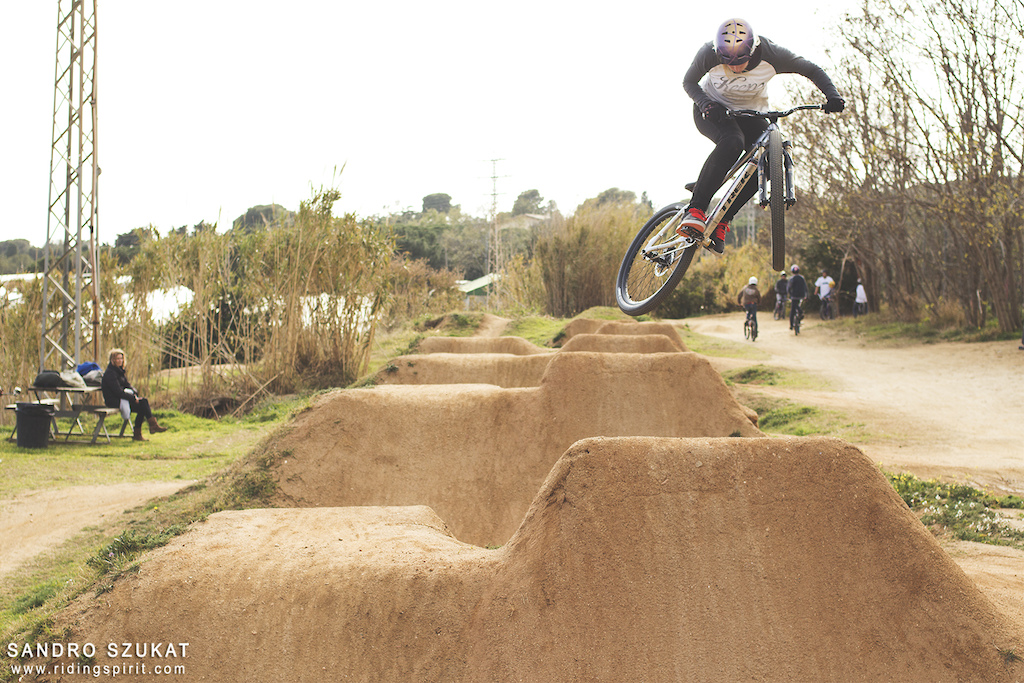 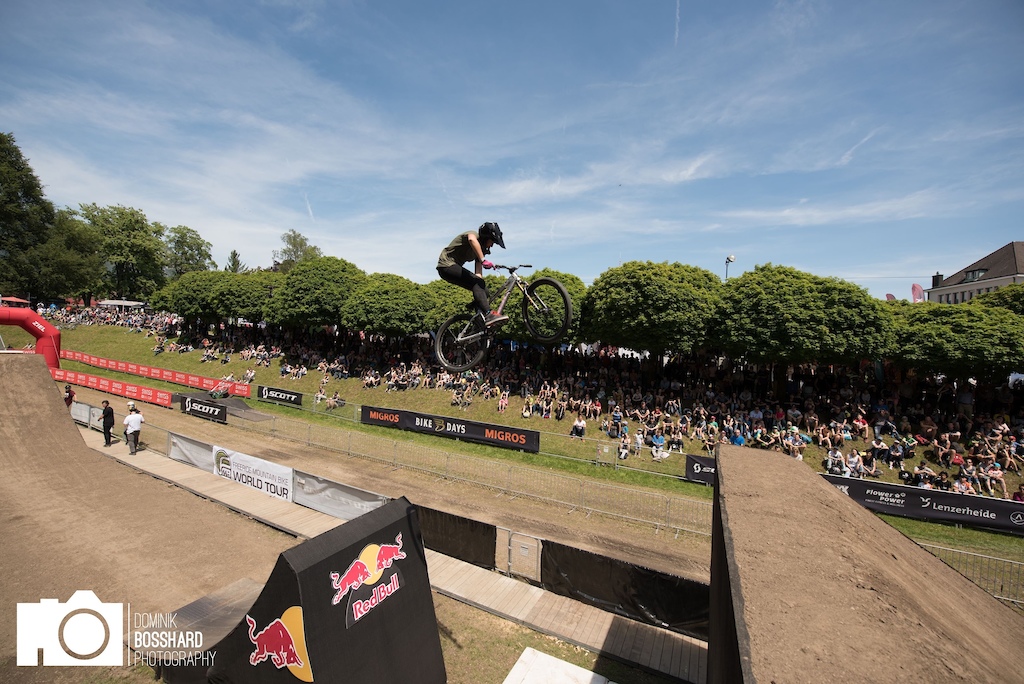 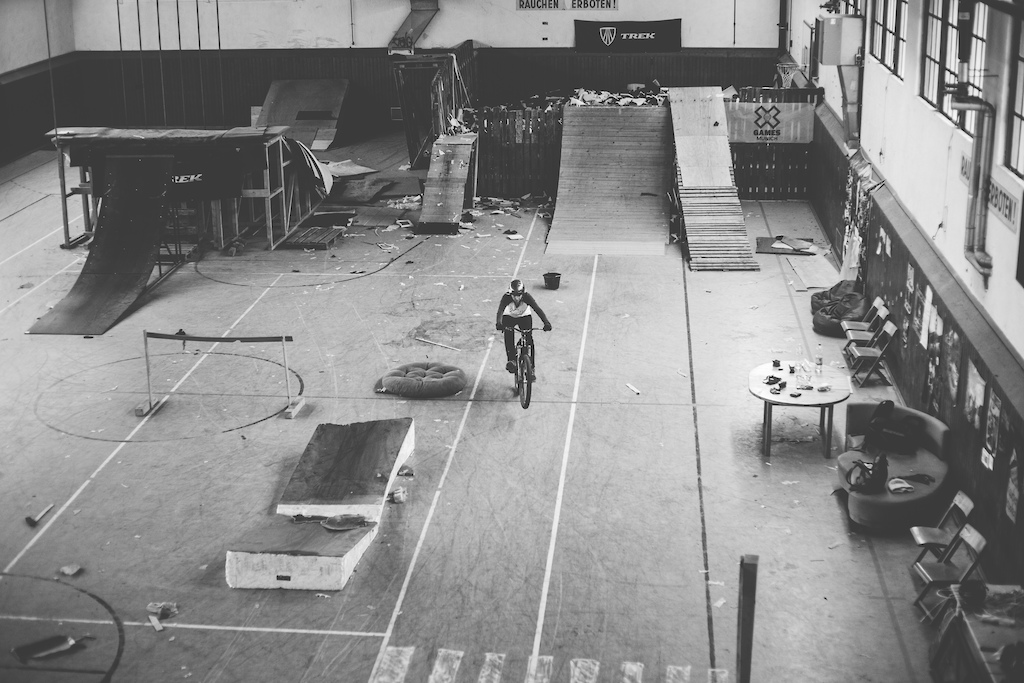 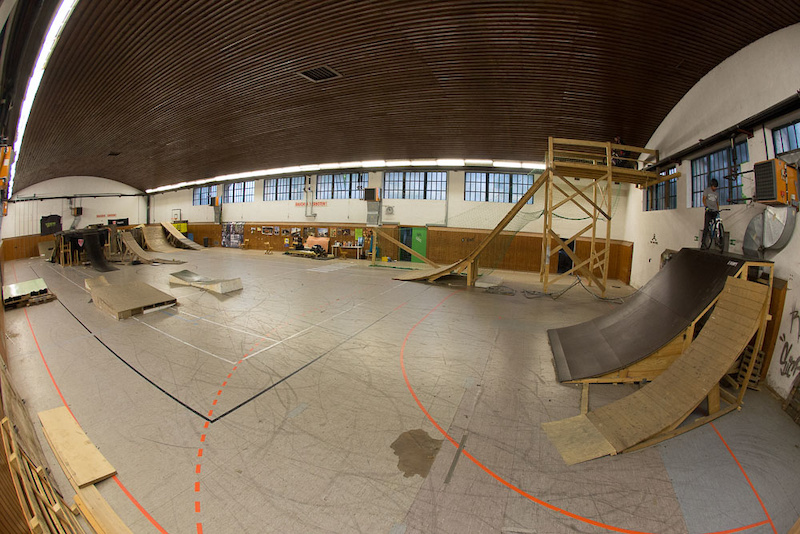 so she built her own indoor park.

If you weren’t a pro mountain biker, what would you be doing?
Maybe a skier? According to my mom, a very successful business woman who lives for her job.

If you were in charge of the sport, what changes would you make?
A girl’s category in the FMB, more attention to girls from the whole industry but less of an importance from the social media side.

When you hang up your racing/ riding shoes, how do you want to be remembered?
A stylish, passionate, and steezy shredder.

What does the future hold for Kathi Kuypers?
Lots of adventures with my bikes. 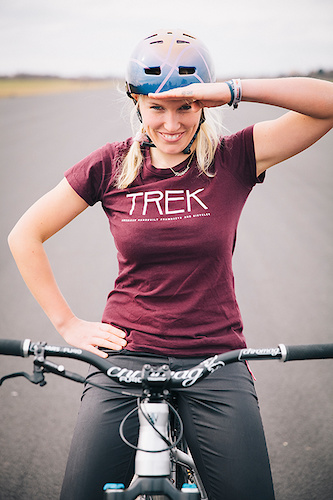 
Posted In:
Interviews Getting To Know Kathi Kuypers

lifeofloon (Nov 12, 2016 at 6:16)
Sorry for the thumbs down. I'm in full agreement with you the bios are pure click bait for me. (Pinkbike really should make it possible to change your thumbs up/down selection)

stumpymidget (Nov 12, 2016 at 7:42)
@lifeofloon: Or at least make the arrows quite a bit bigger, for those of us with fat fingers, tiny screens or, you know, drunk. Too many accidental downvotes.

Theeeeo (Nov 12, 2016 at 6:14)
if you want you can turn my house into an indoor training park? like I dont really own it, but I'd overthrow my parents easily and kick them out and you can take it from there I'll build everything and cook for and stuff. you're awesome kthxbai

vinay (Nov 13, 2016 at 22:50)
Never heard of her so props to PB for getting her some exposure. Good role model for everyone. I've also never seen someone ride with tooth protection, but clever indeed. That said, that bike might appreciate some tooth protection as well now

. That paint job would suit an Orange bike even better. If her mom is right, I'm glad she went with mountainbiking!

bottlerocketneal (Nov 12, 2016 at 16:05)
Worst crash? What about that horrible wreck at crank works dual slalom? That was gnarly

lalena (Nov 13, 2016 at 9:44)
Love it! As a female dirt jumper, I get so inspired when I see other women killing it at the jumps! I really wish I had the pleasure to ride with her at Whistler this past Crankworx.

boxxerace (Nov 12, 2016 at 20:46)
Fun article on a fun loving person! It's like an article about one of my riding friends, lots of adventure, great Q of L and loads of joy. (exceptions to being pro / sponsored, but whatever).

If you have no complain...better say nothing!!!

Yarlezy (Nov 13, 2016 at 6:04)
Rad bio! I've picked Kathi several times this year in the fantasy contest, she hasn't let me down! If you like Brett Rheeder and want to escape winter come to Joyride 150! One love

siobhananon (Nov 12, 2016 at 23:06)
what a totally rad shredder babe! More interviews like this! That story about the grizzly bear in the Chilcotins is terrifying, but I still want to go there ASAP.

Hastings (Nov 13, 2016 at 20:27)
So this delightful German gal has a WWII themed dirt jump bike? It has a pin-up girl motif, so were there frauline pinups? or is this an allied themed bike? I'm confused.
Or is this a "Don't mention the war!" type situation?

justincs (Nov 12, 2016 at 9:31)
the white stuff is made from refined tar sands and should repel anything polar (water/milk) nicely!

dank-caser (Nov 12, 2016 at 6:54)
you can barspin and and tbog and some other small tricks yet you have a sponsor,seems like girls get sponsors at way lower levels than guys

clemson (Nov 12, 2016 at 7:15)
jealous? yeah must be a dream to life from sponsors.... but you have to life your dreams so thats why she ´s still working 2 jobs after finishing university at the moment to pay her bills..... stop complaining and do it yourself. Unfortunatly there are only a handfull of female athlete who can make a living from riding bikes

stumpymidget (Nov 12, 2016 at 8:04)
@lumpy873: Agreed. Read any interview with a pro rider, and you realise it is about so much more than your tricks or your race results. You have to be an ambassador for the brand, portraying a positive image, wether that be through upbeat awesome videos or interesting interviews on places like pinkbike. A great rider who is a complete a*shole is not going to get far with sponsorship.

lewis-denver (Nov 12, 2016 at 18:35)
Sponsorships are about 25% based on skill. It's how the athlete (in this case a bike rider) acts both on and off the track. Do they throw the finger up at people on the street? Are they friends with all the locals and therefore able to get the brand great advertisement? I myself have had a few smaller sponsorships and I only get consistent top 10's at the State Dh and Enduro rounds, never podiums. Without sounding cocky; I can say that all the locals know me and are happy to ride with me. Sponsors love this because all a sponsorship is, is advertisement. You're basically a walking billboard using their products/wearing their clothes/saying good things about them.

dank-caser (Nov 12, 2016 at 22:50)
@lewis-denver: @stumpymidget:
you have good points,if sponsors take you not for skill,whats the fun of the sport if its just for advertising?

lumpy873 (Nov 13, 2016 at 9:37)
@sniperboy13: for the most part, sponsorship is a business. However, there are many different forms of sponsorship. Just because she is sponsored by Trek doesn't mean she is getting the same deal at Brandon or Brett..