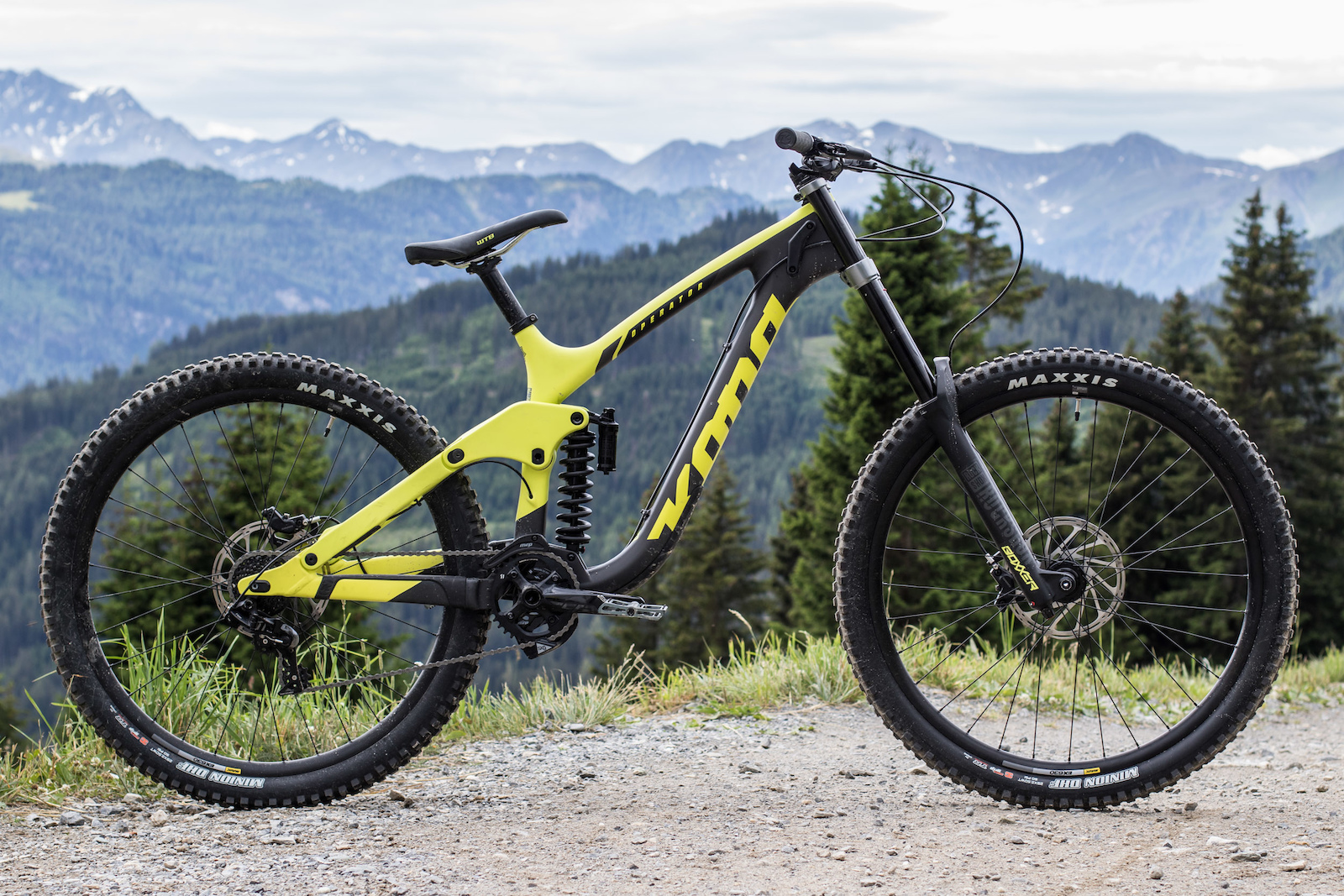 Kona's all-new carbon framed Operator CR has been developed in conjunction with Aussie Pinner, Connor Fearon, who has also been racing this bike since last year which is now available to order. The full carbon (except.for aluminum chainstays) downhill and park rig is specced with 29" wheels but can be used with 27.5" thanks to chainstay adjustment, as well as a flip-chip on the rocker link, and, of course, switching the fork. The CR is available in one build kit, but there are still aluminum Operators available in more affordable options.

I took the Operator CR for some laps of the great bike park in Serfaus-Fiss-Ladis. This bike was specced with a full SRAM build including BoXXer World Cup and Super Deluxe coil suspension, Guide R brakes, X01 DH 7-speed drivetrain, and finished with Mavic wheels and Maxxis rubber.
Kona Operator CR 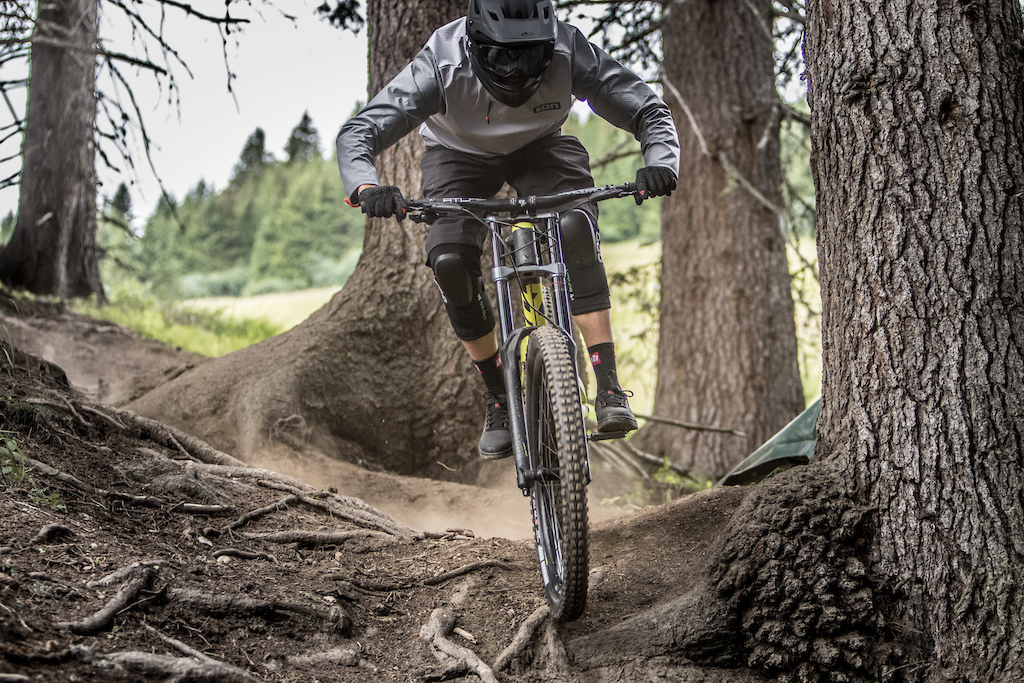 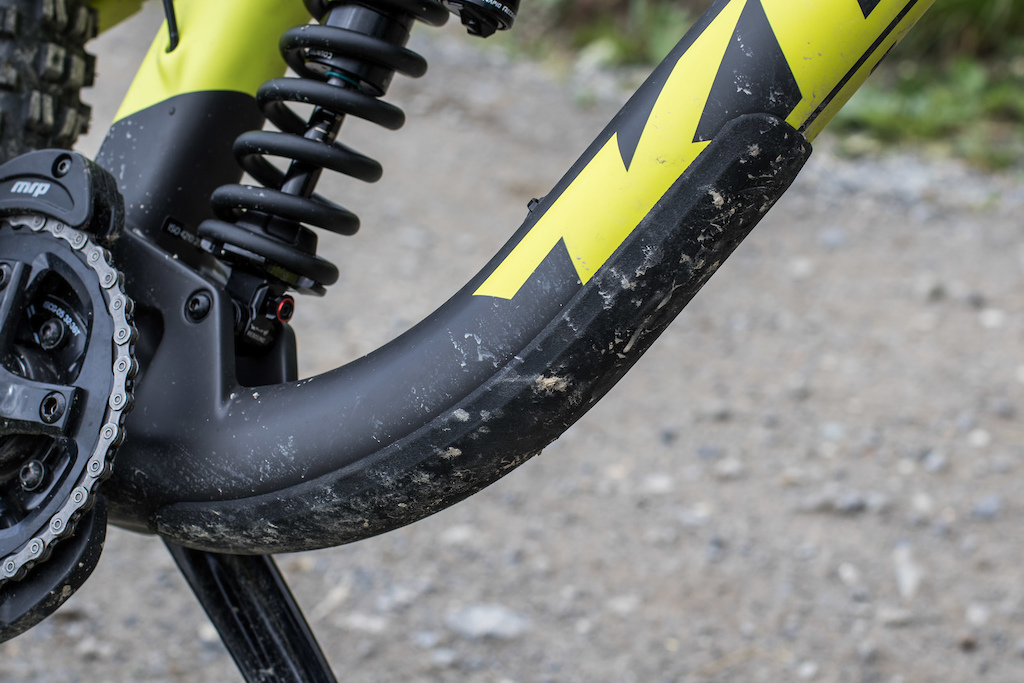 A downtube protector is a must on any carbon downhill bike. 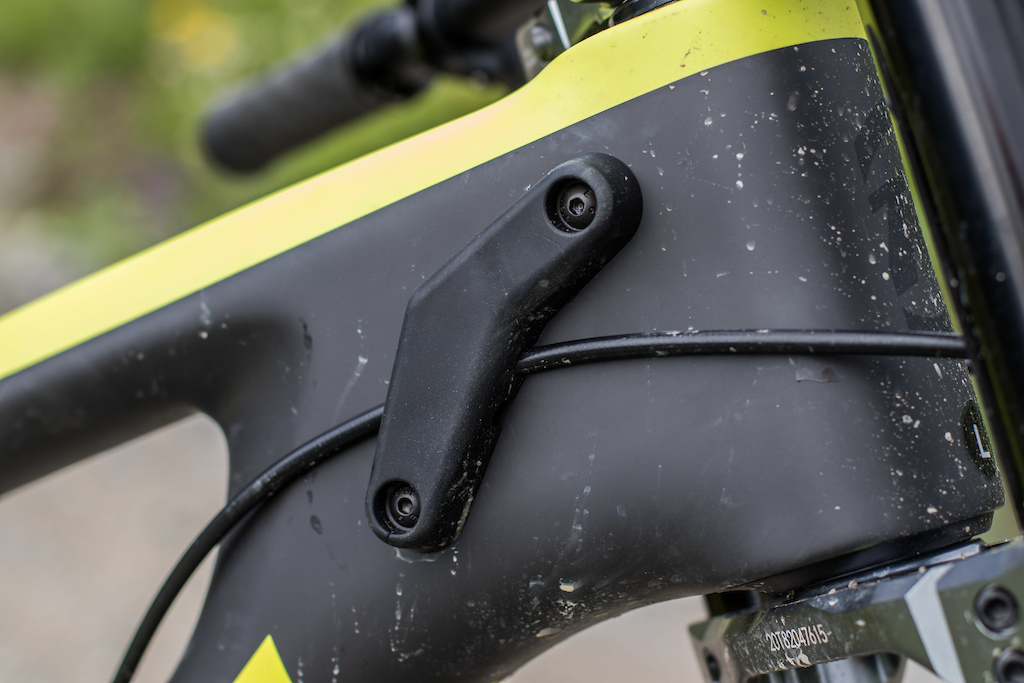 Fork bumpers that double as cable guides have almost become an industry standard.

The carbon front triangle, rocker link, and seatstays are large and have a smooth finish, and there is nearly no nook or cranny to collect dirt or grime. All of the pivot bolts sit nearly flush to the frame and there are no fancy extras – it's a solid looking bike with a job of park shredding and downhill smashing to get on with. 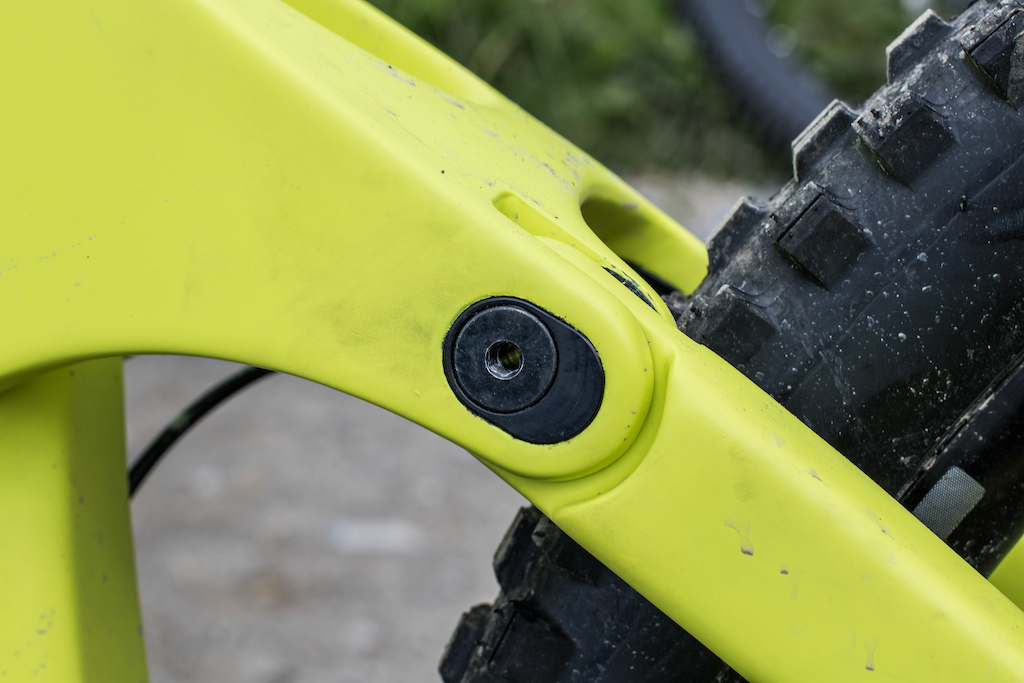 This flip-chip changes the ride height when swapping wheel sizes. 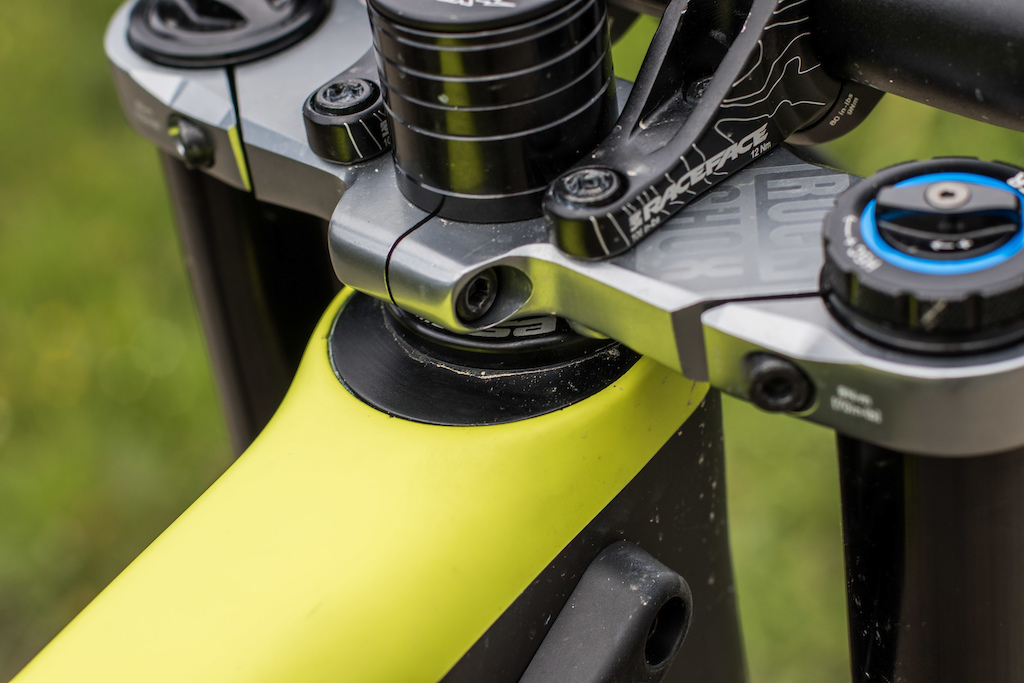 The eccentric headset cups add +10mm to the frame size when switched to the forward position.

The Operator CR comes with 29" wheels but can be adapted to ride with 27.5" wheels (there's a recommended setup for each) but also allows for some customization, too. The rear wheel can be swapped between two axle locations for a 425mm or 440mm chainstay setting, and there are two pairs of holes to mount the brake correctly for each length. The main adjustment between the wheel size is done by changing the fork and flipping the chip on the rocker link. 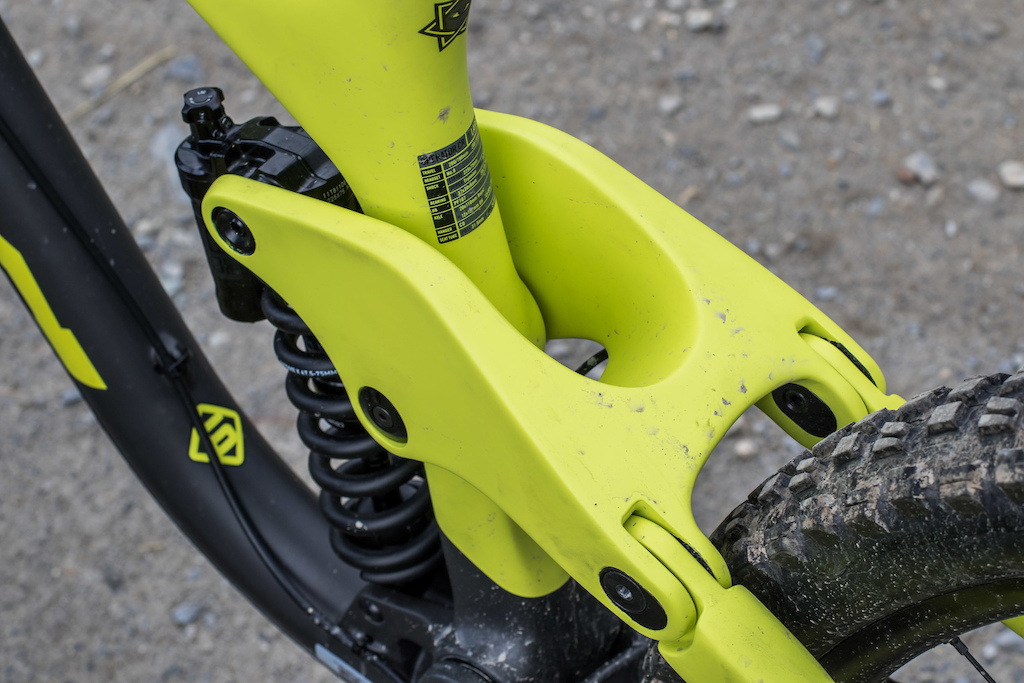 Talking of the rocker link, this thing is a huge chunk of carbon. 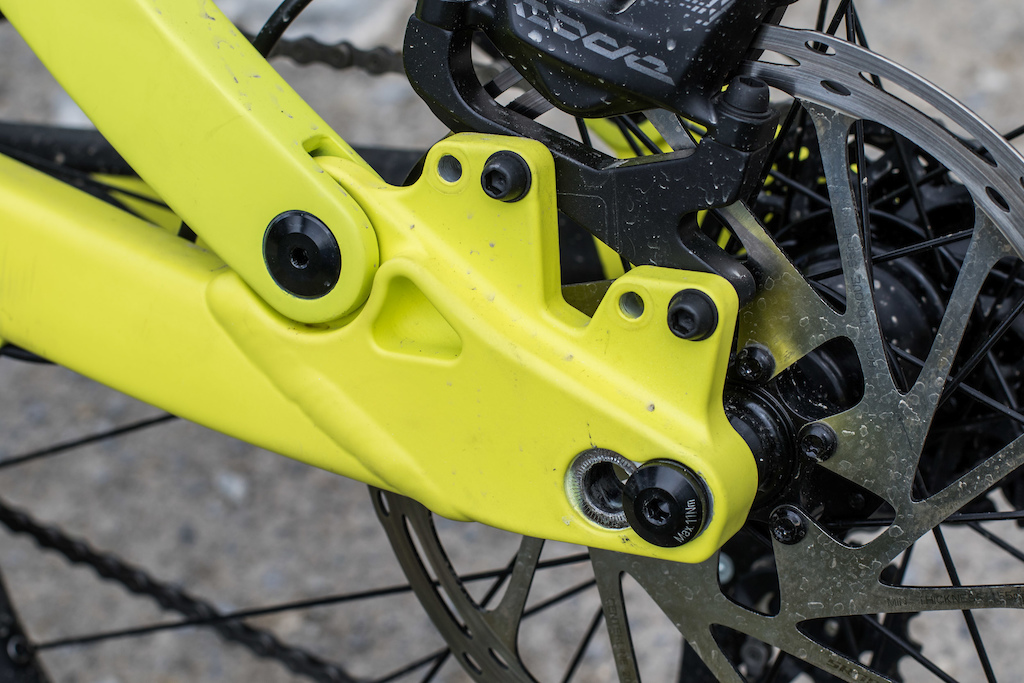 The chainstay length can be switched simply from 425mm to 440mm, and there are two pairs of IS brake mounts to match. 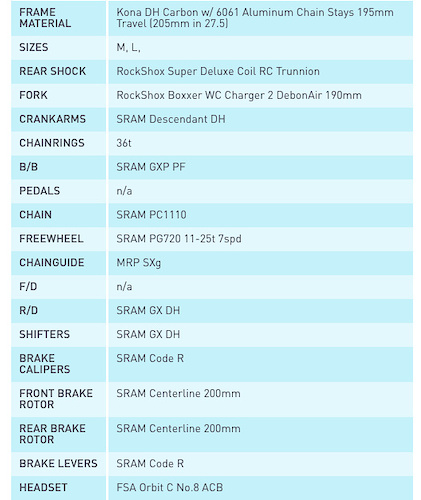 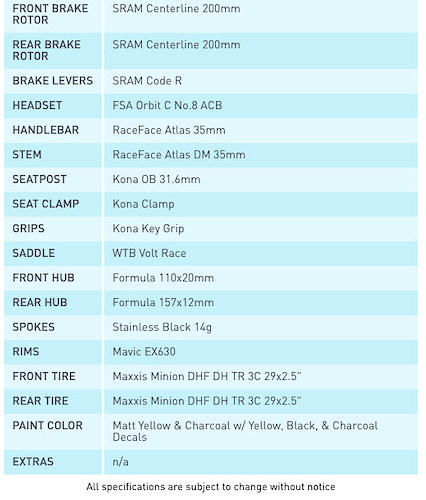 With only one complete carbon bike available, Kona hasn't gone with the most expensive and shiny products they could get their hands on, but they have put together a very intelligent build. The BoXXer World Cup DebonAir and SuperDeluxe World Cup are the premium dampers from RockShox, and the most costly parts to upgrade after the initial purchase. A clever move to give the consumer the best performance here and cut back on the rest of the componentry that is more disposable than the suspension, that's not to say it's not a solid build.

Using the SRAM GX DH 7-speed groupset, Descendant cranks, and Code R brakes gives high performance without the higher price tag of X01 and RSC versions. The rest of the build is delivered by RaceFace, WTB and Mavic EX630 rims laced on to Formula hubs. 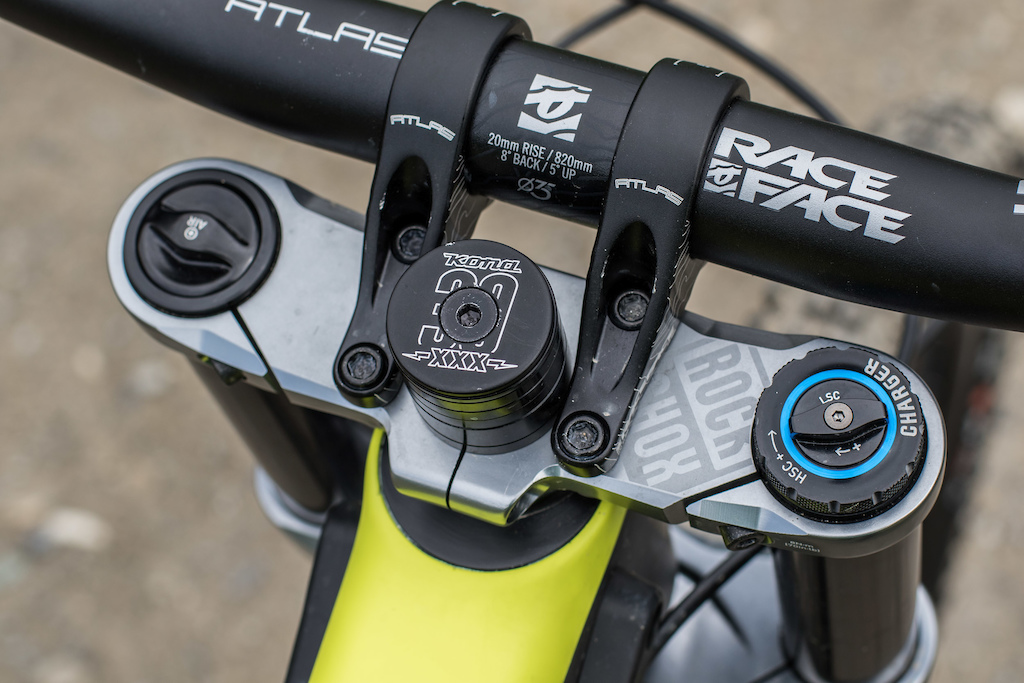 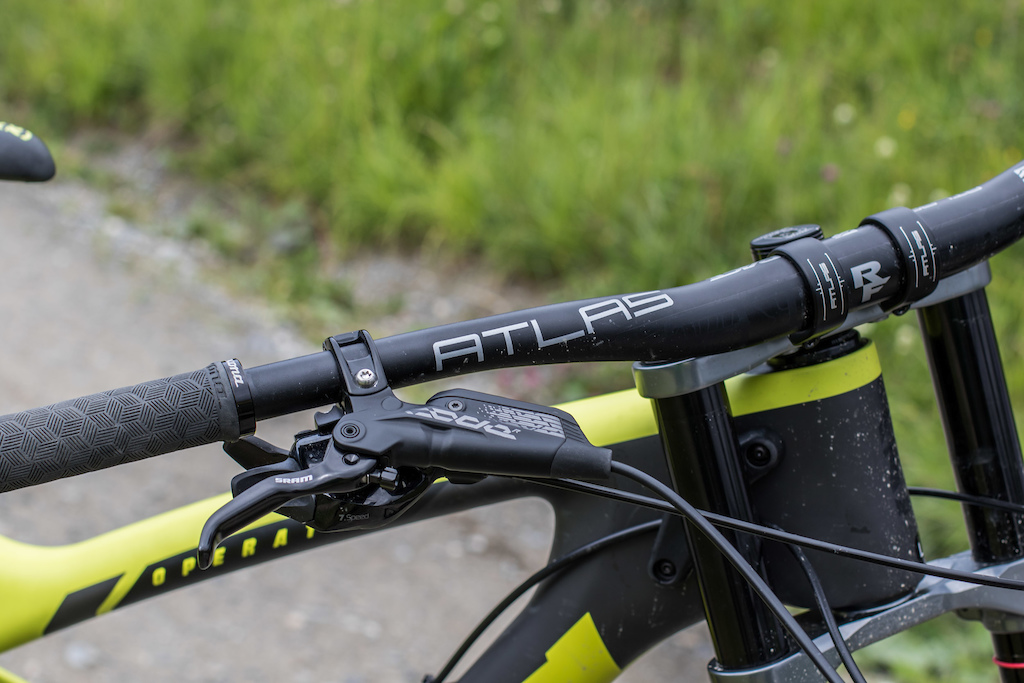 The price is kept in check by choosing Code R brakes, an alloy cockpit from RaceFace, and a Mavic EX630/Formula wheelset. 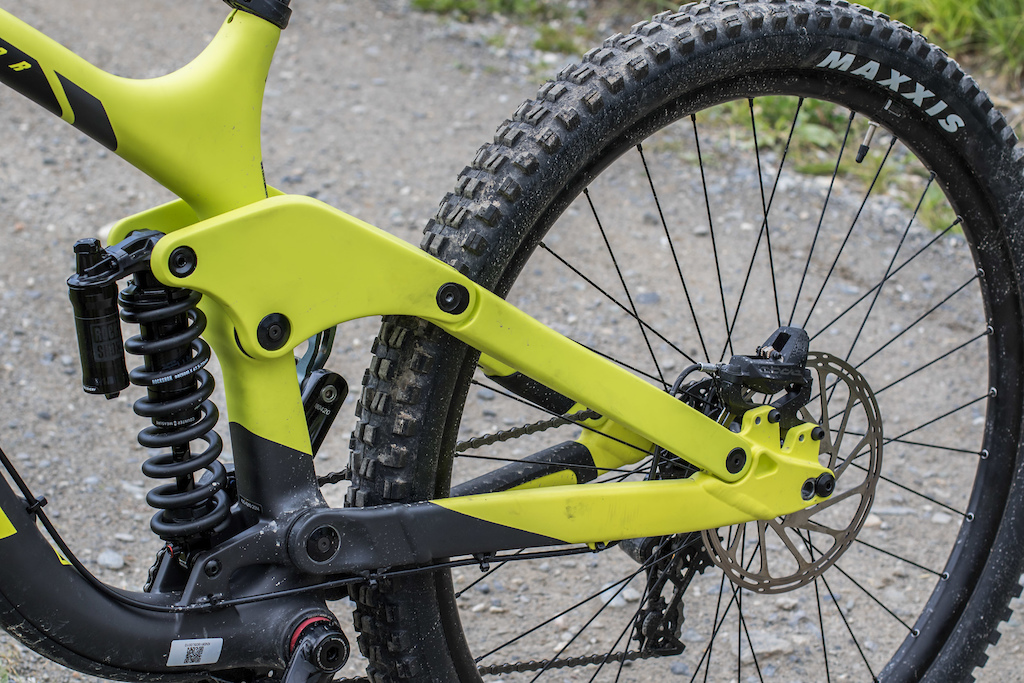 Kona have dubbed this system 'Beamer Independent Suspension,' which is an evolution of the type of suspension that Kona have employed for years. They claim it to be 'off the top' progressive and it will help to ride higher in the travel and recover from big hits quicker. The massive rocker link is said to help with "pure shock movement, whereby the shock is protected from side-load," which I'm not going to argue against judging by its sheer volume.

I can hear the comments already questioning "why didn't they use a Horst-link!?" Well, there are a number of brands who still believe in this type of single pivot with a linkage driven shock, and there is no patent stopping Kona moving the link from the seat stay to the chainstay. The general reasoning (although it depends on specific frame layout) is that the bike sits into the travel when on the brakes in steep sections and preserves the geometry; there could also be more anti-squat and pedal kickback which can help the bike pedal better and generate more speed when pumping. 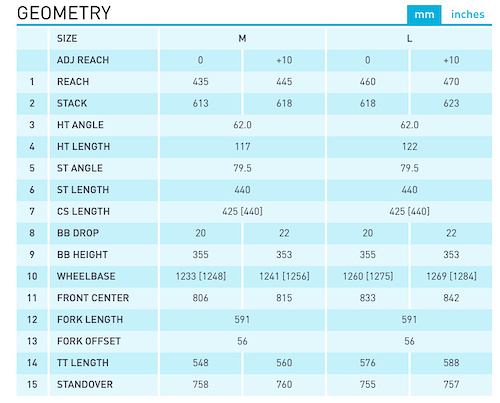 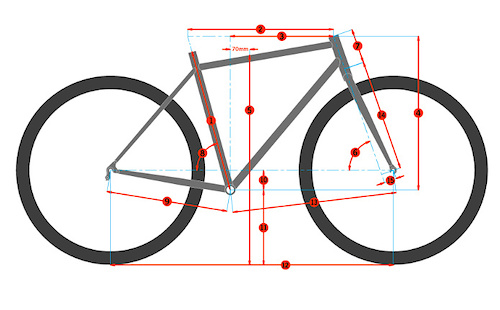 The Operator CR is only available in two sizes that Kona hope will satisfy most of their customers. The medium frame has a 435/445mm reach and the large sits at 460/470mm. If you are looking for something longer, the 27.5" aluminum version offers an XL that goes up to 485mm.

The geometry of downhill bikes has settled down, and now we are finding very similar numbers across the majority of frames. The Operator CR has a slightly slacker head angle than most at 62º, and an average bottom bracket drop of -20mm. The chainstay is either side of average and can be set at 425mm or 440mm. 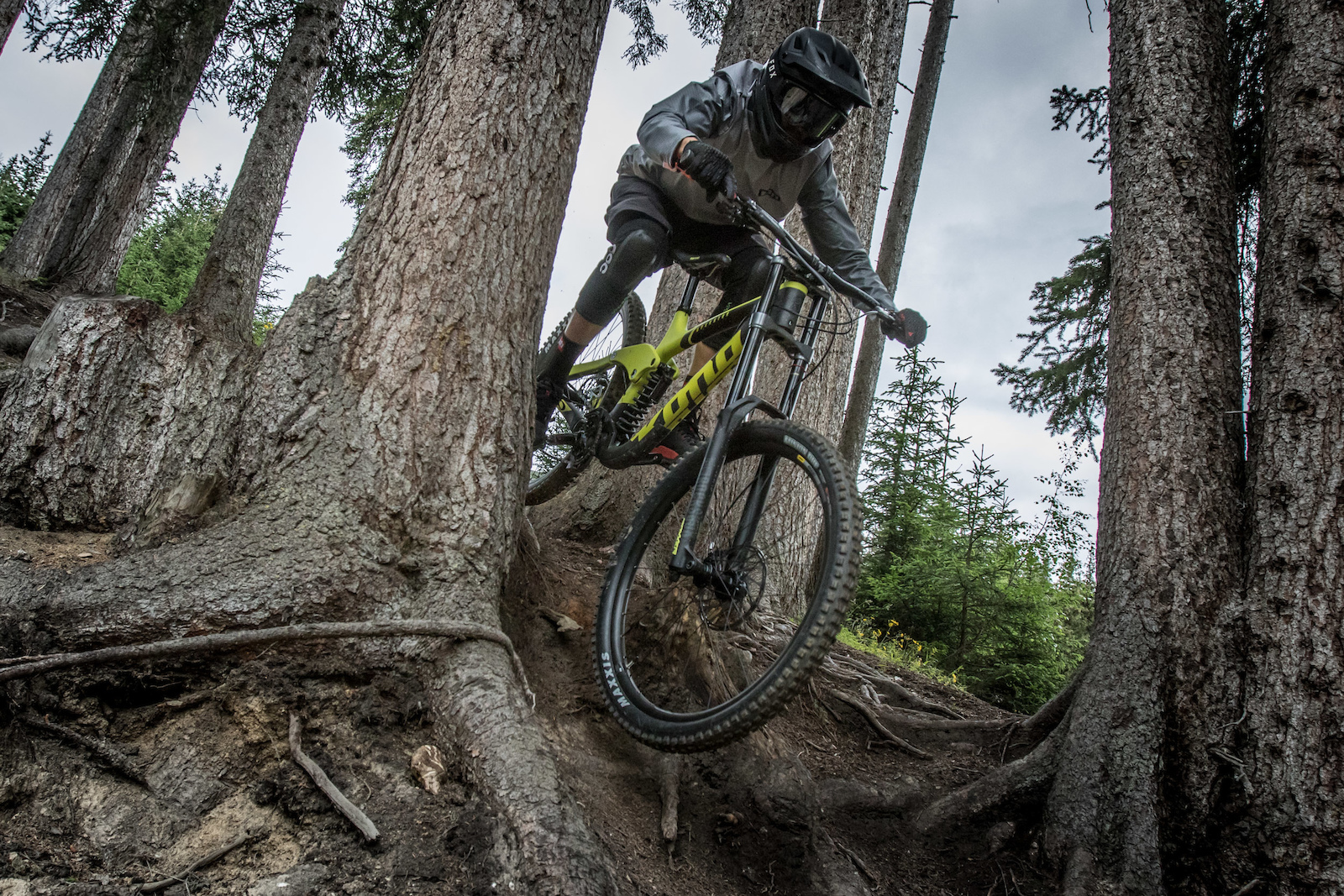 We put in a number of laps in the fantastic Serfaus-Fiss-Ladis bike park which has choices between hardpacked, fast, and bermed trail, or gnarly, natural, steep, and rooty sections, with both styles having plenty of jumps thrown in for good measure.

Out of the gate and on to the pedals the Operator accelerates averagely for a downhill bike but does generate masses of speed really well when pumping and traveling over rough terrain.

Heading into rough and steep sections of trail, it just wants to accelerate, build, and maintain momentum, somewhat scarily as you hold on and try to tame the beast. The rear triangle of the bike is incredibly stiff laterally and is great for schralping smooth berms, but doesn't want to track nicely on roots or off-camber when the bike is leaned over and traveling across the rough. 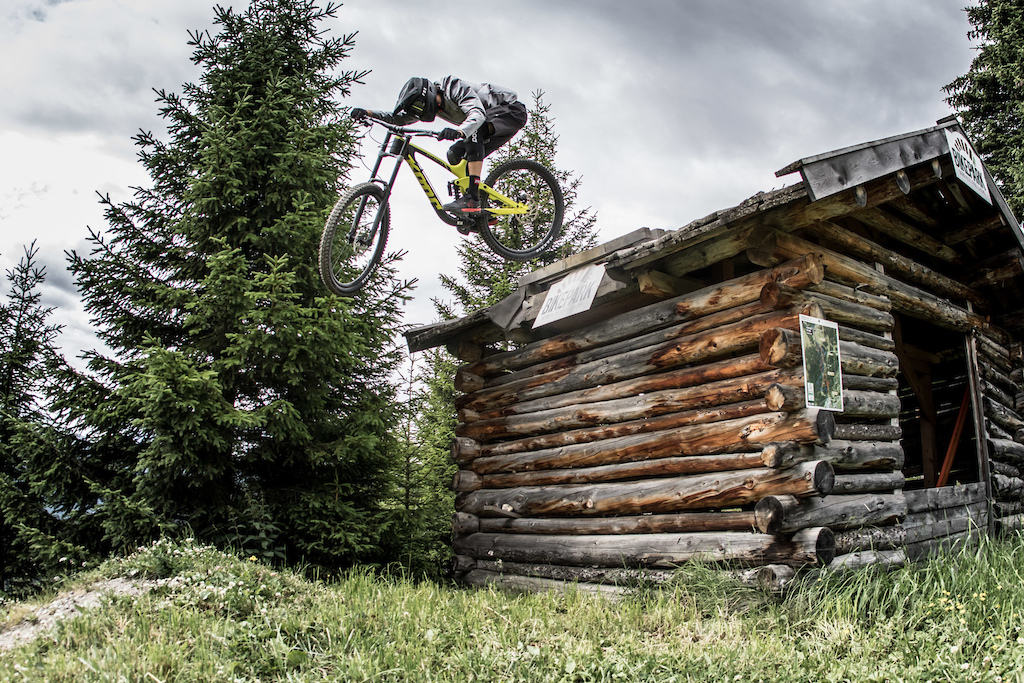 There is plenty of support from the shock and linkage to push against, pump, and land to flat, and it feels like a bike that could take an unlimited amount of my average whips to sideways landings. Overall, the Supreme Operator appears to be a downhill or park bike that is built to take abuse for seasons on end. 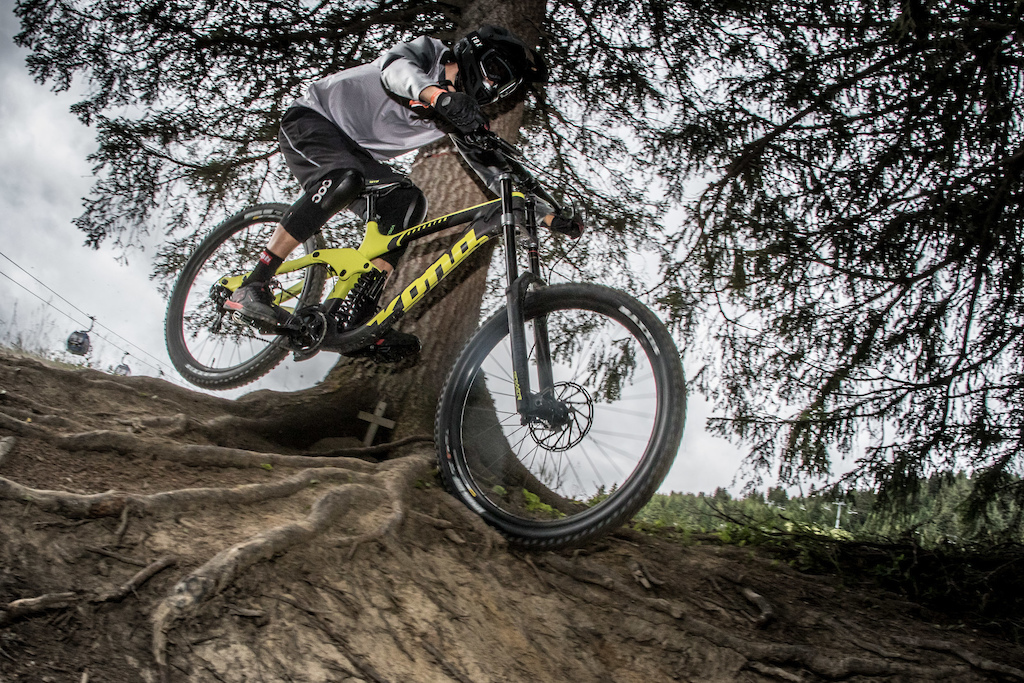 Visit the high-res gallery for more images from this review.

naptime (Aug 10, 2018 at 22:41)
@IluvRIDING: no worries, I think it's a silly rule. I wonder if it was dropped, would riders/teams use different wheel sizes. I've read some freerides run 26 rear an tweener up front an moto has been running different size wheels/tyres for ever

highfivenwhiteguy (Aug 10, 2018 at 10:57)
"...doesn't want to track nicely on roots or off-camber when the bike is leaned over and traveling across the rough."

This seems to be a big problem, can you elaborate?

CaptainBLT (Aug 10, 2018 at 11:11)
That link immediately caught my attention as being f'n huge. Besides my personal aesthetic preferences, it sounds like all that volume also makes it a little too stiff. I wonder if the WC riders will make a custom link to allow more flex?

MTBrent (Aug 10, 2018 at 11:26)
When a frame is "incredibly stiff laterally", any lateral force from an obstacle (hitting a rock, root, etc. when the bike's leaned over) will cause the entire bike to move out of the way of said obstacle. If there's some lateral compliance, only the rear end can will out of the way of the obstacle and keep you and the front triangle stable, relatively speaking.

Think of riding a hardtail and a 200mm DH bike in a straight line through some lovely braking bumps. Which one will be easier to ride fast, the one that's super stiff in the vertical direction (hardtail), or the one with 200mm of "compliance?" The forces may be different, but flip the bike 90 degrees and the concept is exactly the same for lateral stiffness.

leftCoastBurn (Aug 10, 2018 at 12:33)
29er wheels will also act on the suspension less as well. Obviously a big part of having suspension is the ability for the wheel to track the ground. Making the wheel heavier and decreasing the approach angle of the wheel on small/medium bumps will change how the suspension tracks the ground. This effect would probably be much less noticeable (if at all) on a high pivot, longer, more flexible rear like the commencal supreme. On a bike with a shorter, rigid, low pivot like this Kona the effect will likely be more noticeable

Samplidude (Aug 10, 2018 at 12:44)
Also as the first generation of 29er downhill bikes gets designed and built, manufacturers will likely be less on point on finding the perfect frame stiffness. The frames who use the same tubing as their 27.5 predecessor will mostly be a little too flexy as the 29er wheels are gonna be less stiff and it is going to add up.

But manufactures might just go a little bit too far trying to compensate for the 29er wheels; see for example this frame with a stiffer rear end, possibly overcompensating for the decreased wheel stiffness.


Also look at the GT 29er with larger diameter tubing on the chainstays than can be found on most 27.5 DH bikes.

Petre (Aug 11, 2018 at 2:53)
Operators have always been this way. I felt the super stiff rear end even on my old operator 26. When i borrowed a canyon torque with a way flexier rear end and did some laps on the same trail, i did find the flex to be helpful on rooty offcambers, but time-wise it didn't make any difference. It's more of a problem of getting used to the bike than anything else i guess, as this is only a first ride report

zyoungson (Aug 10, 2018 at 12:39)
The whole bike does, last years bike looked good I dont know how they can make a bike look so awful just by making it out of carbon.

blackthorne (Aug 10, 2018 at 19:22)
I can picture a Kona product manager saying “for f’s sake”, and I completely get it. It’s easier to clean. Great. It’s an f’ing rocker. Fine. How about marketing custom rockers? One with a cutout. Gold plated? Geometry-specific? Adjustable rocker for $49.99? Ok I’ll leave...

Loki87 (Aug 11, 2018 at 13:35)
I thought the same from the first pictures, but i´ve seen that exact bike in Serfaus a few weeks back and it´s stunning in real life. For those who´re still not happy with the rocker, a little black sticker simulating a cutout of some sort will easily sort this out visually, but give the bike a chance. It´s a great looking bike once you have it in front of you.
It´s certainly not an elegant bike, but the sledgehammer aesthetics are something nice and refreshing imho.
If anything it is at least a highly confidence inspiring look!

ibishreddin (Aug 10, 2018 at 13:25)
EVERY BIKE SHOULD HAVE ADJUSTABLE CHAINSTAYS LIKE THIS!! Short for fun, long for speed

FredFurious (Dec 12, 2018 at 6:28)
@all DH29er owners: Did you ever have trouble with transport, especially with carriers outside the gondola, or the height inside? Could there also be a problem with car transportation?

fecalmaster (Aug 10, 2018 at 10:39)
Bonner independent suspension is what I've been waiting for all these years. Finally Kona comes out with a fresh new design.

Kramz (Aug 12, 2018 at 0:55)
These inboard mounted brake levers, they should be better in theory, but I tried it, and it was terrible for me. Probably just a case of not being used to it.

Riwajc (Aug 11, 2018 at 5:00)
Saying FULL carbon then saying except the rear triangle is a non sequitor. I know pedantic but still.

nismo325 (Aug 10, 2018 at 11:07)
fair enough it kinda future proofs the bikes a bit instead of being dedicated to one wheel size. I know if i was looking at a dh bike right now it would be one thats convertible.