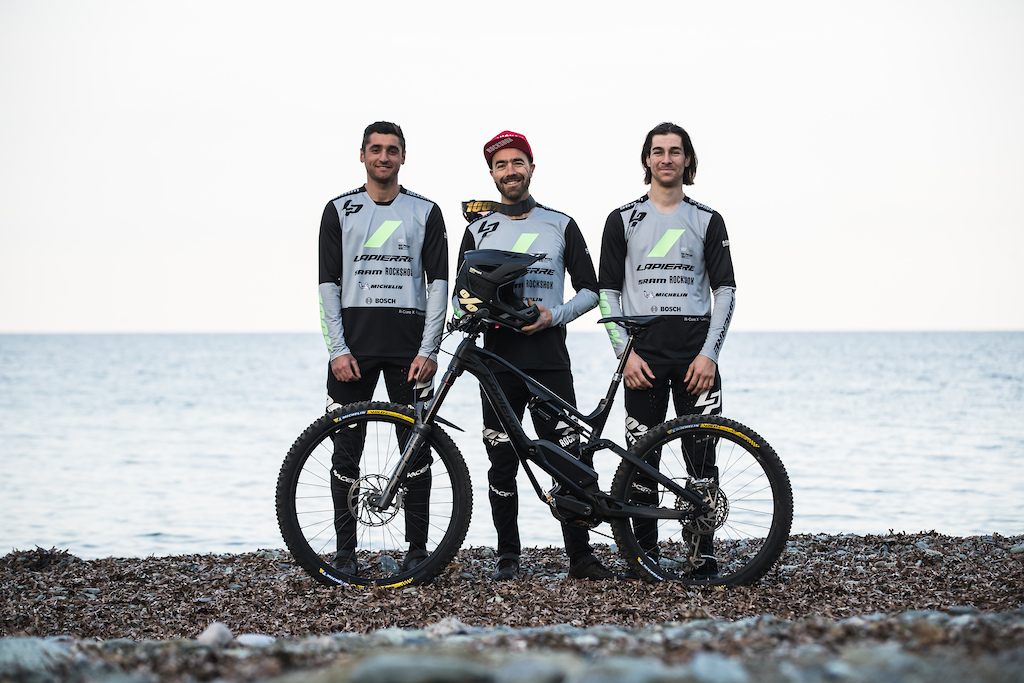 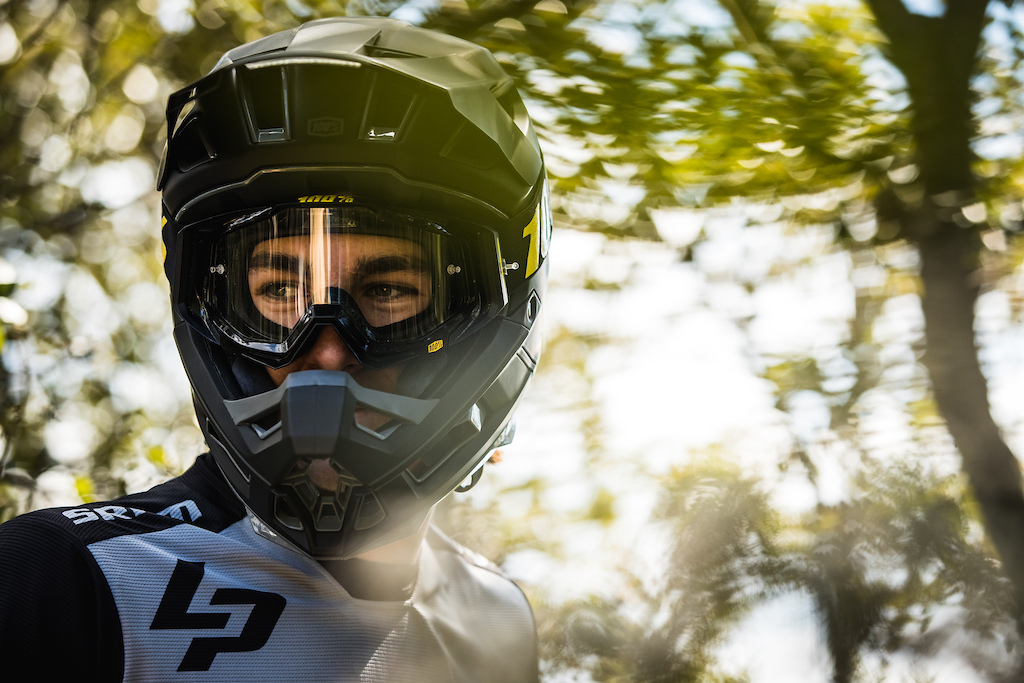 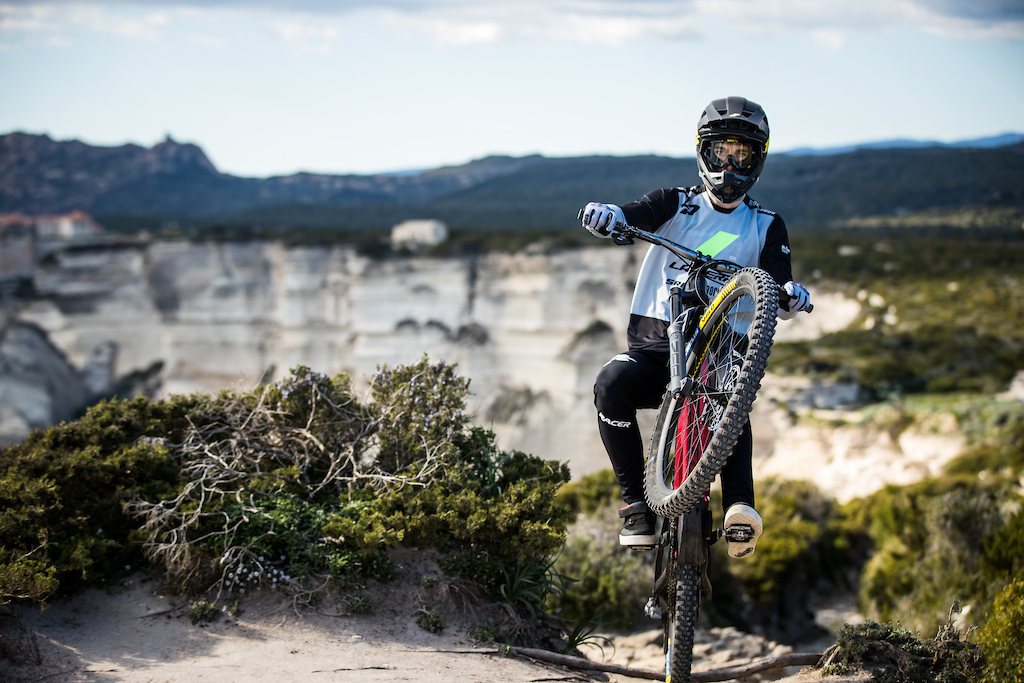 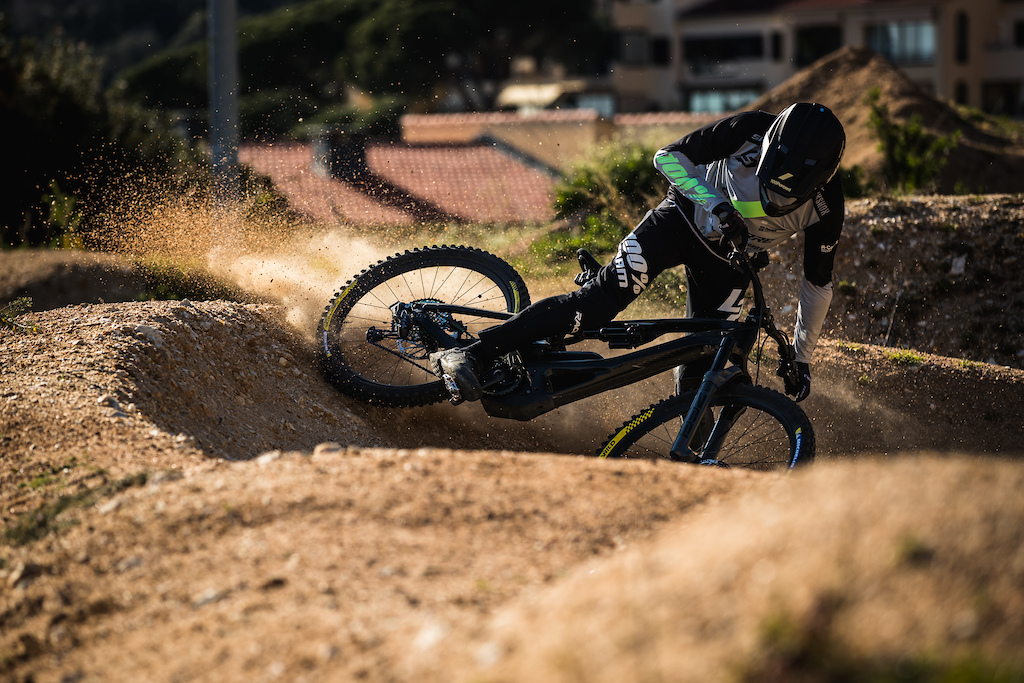 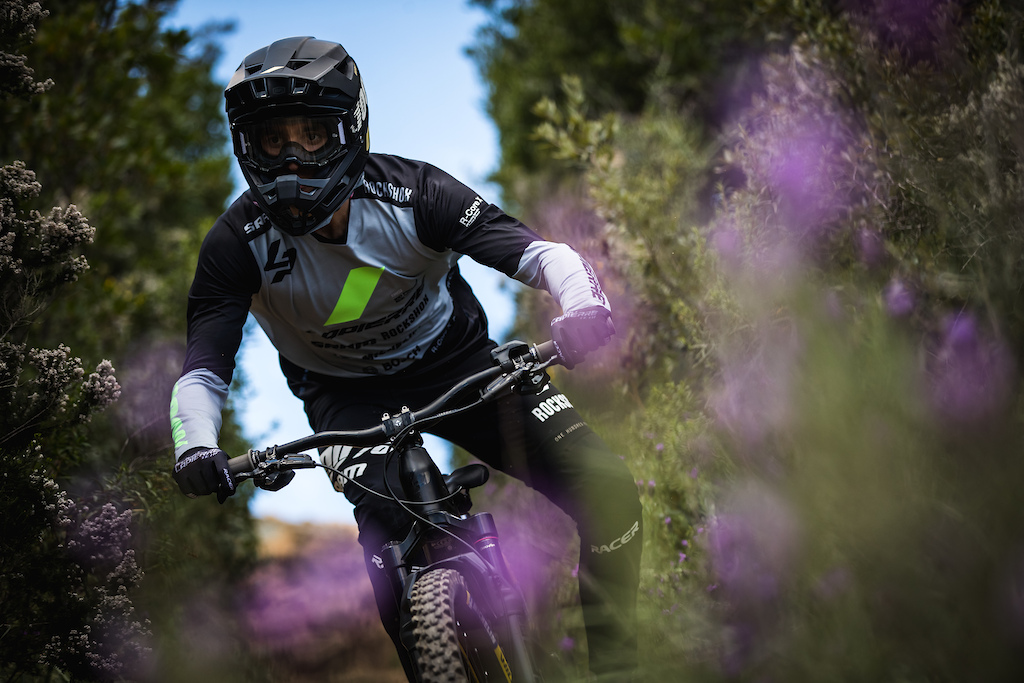 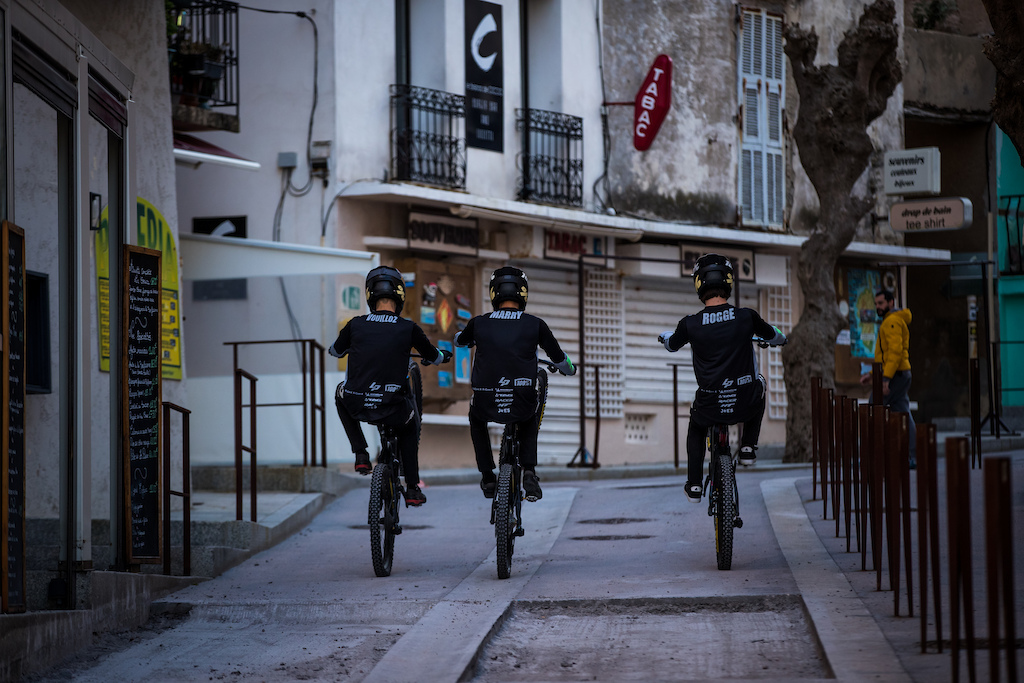 Trailsoup (Apr 20, 2021 at 13:41)
So are the race organizers apparently. But who knows, it might turn into something interesting someday.

I'm kind of worried about what represents what emtbs are designed for. I'd rather see adventure glorified, not some mock battle glorifying one man's triumph over others trying to display athleticism on some hillside (just with a different class of equipment).

KavuRider (Apr 20, 2021 at 16:47)
I thought ebike racing WAS going to be like a hard enduro. Makes no sense having them race the same courses as the pedal bikes...

Would be kind of neat though.

melonhead1145 (Apr 22, 2021 at 1:27)
How is it different from any other form of MTB racing apart from the motor? Some bikes are better than others, obviously the motor will play a big part so needs to perform well. No different to what happens in motorsport

bcamapgnolo (Apr 20, 2021 at 15:09)
Is the equipment regulated or capped in terms of power output or weight? I understand if Lance Armstrong got on an e-bike and I did, it would be quite different, he's putting in many more watts than I can, but couldn't I dial up my battery / OS on the bike for the duration of the race to match, and when the race is over, revert the OS w/ a quick 'update' before any scan or check?
Are E-mods posible? I'd have a 1.21 Gigawatt mod in seconds of unboxing the new bike! GREAT SCOTT MARTY

webbe (Apr 21, 2021 at 4:40)
@bctrailblazer68: @bctrailblazer68: How would you enforce those regulations though? I can't imagine mtb racer organisers can afford scrutineer teams with rolling roads to inspect everyone's power output.

bctrailblazer68 (Apr 22, 2021 at 0:15)
@webbe: Many types of racing have restrictions and checks in place. I can't see why a simple bench setup can't check power outputs against manufacturer specs to at least create an even playing field on that level. It's not rocket surgery.

tonkatruck (Apr 20, 2021 at 12:47)
E-Mtb racing is pointless. It should be sanctioned along with any other powered motorsport racing. You defeat the whole purpose of mountain biking. Earn your downs

DoubleCrownAddict (Apr 20, 2021 at 12:59) (Below Threshold)
This nonsendical perspective also implies that World Cup DH racing is pointless since they don't eat their downhills. They do technical climbs in e ews that you likely wouldn't even consider on your retro grouch old timey non e bike.

likeittacky (Apr 20, 2021 at 21:21)
@Clarkeh: they are given times to be at the starting point for the next segment of the timed DH run; not necessarily racing the climbs, rather hustling to make their rider start time. Only climbs situated within the course run are thus timed.

fautquecaswing (Apr 20, 2021 at 23:10)
@won-sean-animal-chin: dh, you mean this bike style where you need a nuclear plant to go up? Same fight as emtb to me. Without speaking about destroying a mountain to create a wonderful park.

justwaki (Apr 21, 2021 at 0:00)
This is not a conrarian gland in my brain driven post: I do believe Ebike racing can be awesome when done right. In Enduro they can simply ride even more downhill stages in a weekend of racing.

Short track Ebike XC could be awesome too... or actually - you could resurrect 4X this way. Just imagine the 4X course that they can take many laps on, can be with super tech climbs too. I would watch that over regular 4X any day. 4X was silly considering what BMX elite racing is.

@mattwragg lead us! Let us open up our minds and make proper use of these things.

Clarkeh (Apr 21, 2021 at 2:52)
@likeittacky:So you just tweak the overall allowed time and stage start times to make it pressing for ebikes. What is the difference?

gnaralized (Apr 21, 2021 at 7:26)
@justwaki:
Absolutely ! And if we go farther we can even imagine to transform it in an spectator sport, like in an arena, and call it super X ?

justwaki (Apr 21, 2021 at 7:32)
@gnaralized: I can race Ebikes... can't ride a moto for sht... can't relate to SX this much no matter how much I enjoy to watch it sometimes... pardon me but handling an Ebike is way easier than handling a fricking moto, even on some small local MX track or an Enduro MC in the woods. People who ride Ebikes will like to watch Ebike racing. it is a quickly growing audience

Well, it is E-mountain biking, so different to mountain biking. They are not racing people without motors, so what is your point? Also, I think Nico has "earned his downs"

I have not looked into the racing side of E-Mtb, but I would have thought they would require regulation like any other competitive sport.

justwaki (Apr 21, 2021 at 8:01)
@teamdoa: testing the battery and the motor (maybe doing an Xray) of bikes of folks on podium and then of a few random others shouldn't be any more tricky than what needs to be done in motorsports to keep the regulations respected. They Xray road bikes on grand tours already.

Racing format would surely speed up the development of Ebikes and add some innovation too.

PauRexs (Apr 20, 2021 at 15:43)
Waiting PB to review this bike! It has to be compared to the e-World champion bike to the latest specialized which you claimed it´s almost perfect... this one it´s much cheaper and it´s damn fast and agile...

SebIsen (Apr 21, 2021 at 13:43)
I don't really like ebikes or Lapierre bikes .... But I was able to test the glp bike last year and it surprised me a lot. This is probably the one that comes closest to a real enduro bike

johnny2shoes (Apr 21, 2021 at 5:51)
That first picture, is that seaweed they are posing on? Gotta say I think Lapierre are on to something with that battery positioning

luriaguy (Apr 21, 2021 at 9:24)
Ebike - sales well to older riders who are spending generously on their fun. and it is fun.
so Nico and the other twi duds having fun promoting the bikes for living, why not?

freestater (Apr 21, 2021 at 16:47)
Just imagine the skill progression of ebike racers. I know that since I bought en ebike last year, my riding has progressed tremendously. Then imagine when those same racer also race no e class. They will dominate and the haters will call it cheating. My point is Ebikes are fun and also great training tools.

mccarthyp (Apr 21, 2021 at 1:43)
I think the course should be longer and more challenging for assisted bikes.

BMXrad (Apr 21, 2021 at 7:13)
Vouilloz and Pilgrim working for the same company makes me smile hahahaha

bctrailblazer68 (Apr 22, 2021 at 0:25)
The funny thing is this bike will be sold out in both models before you can say 'take my money' People are buying e-bikes, lots of e-bikes.

rabidmonkfish (Apr 22, 2021 at 4:46)
@bctrailblazer68: there's way more unfit people not willing to pedal enough to get up hills but who want to be part of the scene. So those paired with other more typical MTB riders looking to get an ebike are certain to eclipse normal MTB sales. But u likely know that already ......sad times ahead for our sport as I see this being handled the same way as 26inch wheels. It's advertised as more choice then they forget about non motor mtb. Soon u will have to pay an even bigger premium to get a decent modern non motor equipped bike once 90% of cyclists are on laz-e-bikes.

FUbob (Apr 20, 2021 at 17:55)
How much coal was burned to charge their environment damaging Cobalt-Lithium batteries I wonder...

BikesBoatsNJeeps (Apr 20, 2021 at 18:29)
2.68kWh per kg is what you expect from a coal plant. So then you gotta figure in transmission losses, and charging losses, so it's probably a little more than .5kg per fill up. Except only about 10% of US energy comes from coal so realistically it's only about .05kg.

FUbob (Apr 20, 2021 at 18:59) (Below Threshold)
@BikesBoatsNJeeps:
20% of US power comes from coal but the more straws dipped into the power pool means more needs to be generated from all means. I feel if you're gonna ride a bike you should pedal it under your own power. Too many Waffle House, pork bun, Budweiser guzzlin goons plugging their "bike" into the wall to be able to ride while fuxing up trails, being a nuisance, blowing up spots, etc. They should stick to their POS Hardly Ableson oil leaking bikes with blaring tunes and loud pipes on the street and leave the single track alone.

Bicycles should not require electricity from any source...

BikesBoatsNJeeps (Apr 20, 2021 at 19:28)
@FUbob: you mentioned coal specifically, which is 10-11% and declining. I frankly don't care at all if people ride e-bikes. I don't own one, but different strokes. Plus if an e-bike replaces a car for someone's primary commute then all the better. One less car.
If you drive to the trailhead you're likely generating far more green house gasses than a decade of charging an ebike battery.
Unless you drive an electric car, like I do, in which case you're still generating far less overall emissions. (And I bought mine used)

FUbob (Apr 20, 2021 at 19:53) (Below Threshold)
@BikesBoatsNJeeps:
Not sure why you replied to my first post, side-tracking my point (with an incorrect stat) that bicycles should not expel emissions. Open your eyes.. from the same website you linked:
"The percentage shares of utility-scale electricity generation by major energy sources in 2020 were
natural gas 40%
coal 19%
nuclear 20%
renewables (total) 20%
non hydroelectric renewables 13%
hydroelectric 7%"

Either way, majority of Ebike riders are fat and lazy and should pedal under their own power. There are exceptions of course, people with health issues, age, etc., but majority are fat piles. It's pretty obvious to anyone with eyeballs really.

Your electric car just moves the exhaust pipe to a different location but I guess it makes you feel good.

DoubleCrownAddict (Apr 20, 2021 at 13:00)
The team to beat this year. Look forward to more non e bike ews racers switching over once they realize how much fun they are missing out on.

TimmyCheese (Apr 20, 2021 at 13:14)
@SlodownU: Don't underestimate what they can accomplish by repeatedly shoving something down our throats

DoubleCrownAddict (Apr 20, 2021 at 20:00)
@p-m-z: I actually love it, so will you when the top pros start racing in it. The climbing stage makes it more interesting than regular enduro.

Great to be back!

p-m-z (Apr 20, 2021 at 20:05)
@DoubleCrownAddict: It's not real bike racing though. The EWS racers have to train INSANELY hard to have the fitness to get up and down the hills, It seems dumb that people on motos can earn a rainbow jersey in a mountain bike style race. Those EWS guys really train hard to earn the rainbow jersey. And actually I will never like it, I am in the anti-ebike camp.

Clarkeh (Apr 20, 2021 at 21:03)
@p-m-z: Reminds me of how those guys that ride actual motorbikes don't need to train at all to be world champions, the motor does literally every aspect of riding for them afterall

p-m-z (Apr 20, 2021 at 21:14)
@Clarkeh: naw I'm just saying that the EWS and XC athletes train insanely hard and get the stripes. Maby they could do a separate non- mountain bike world cup moto race. Just my opinion tho

Clarkeh (Apr 21, 2021 at 2:56)
@p-m-z: Just consider that since everyone is also on ebikes, then the fittest, most skilled person on the ebike will win. Doesn't mean you can just do no training and come away with the #1 .