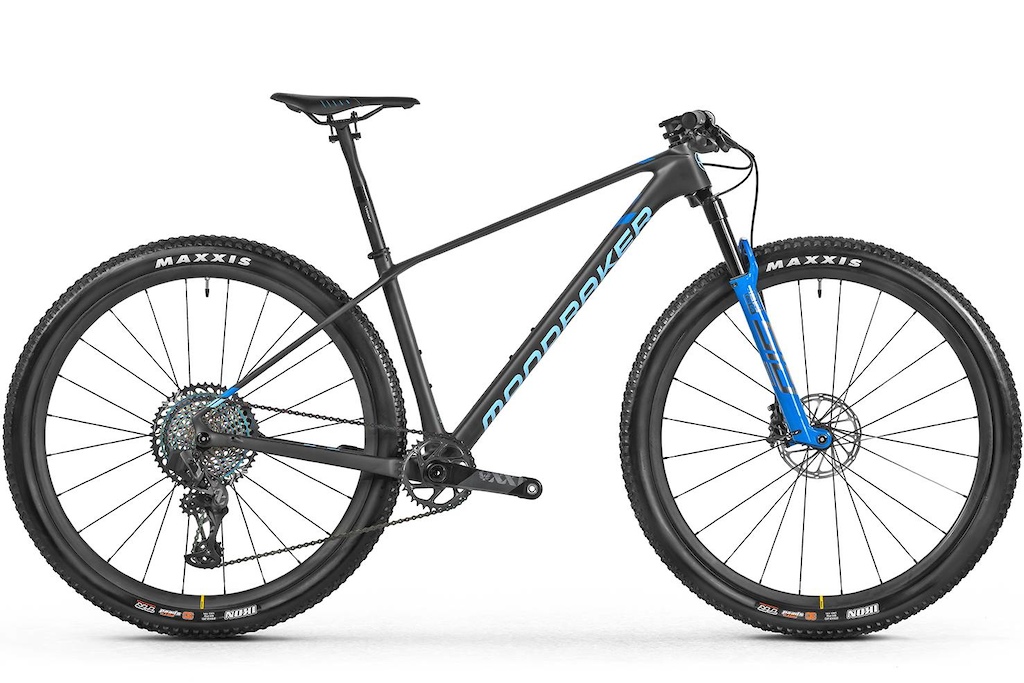 A longer and more fiercely fought battle than the number of teeth on your cassette is the weight of your frame. Cross-country hardtails are at the forefront of the battle and over the past few years with the launch of the Unno Aora, Specialized Epic, and now the new Mondraker Podium, that weight number has gotten steadily smaller.

It was only a year ago that the new Specialized Epic claimed to be the lightest production frame. Coming in at 790g for a size M with paint, the Epic matched the Unno Aora's weight, which until then was claimed to be the lightest production hardtail. The Barcelona-based brand openly showed their manufacturing ups and downs with attempting and succeeding at molding an entire composite frame in one shot, along with its more aggressive geometry compared to the rest of the XC hardtails out there.

But now the 2021 Mondraker Podium comes in at a claimed 775g for a size M, undercutting those bikes by roughly half a packet of your favorite Walkers crisps. 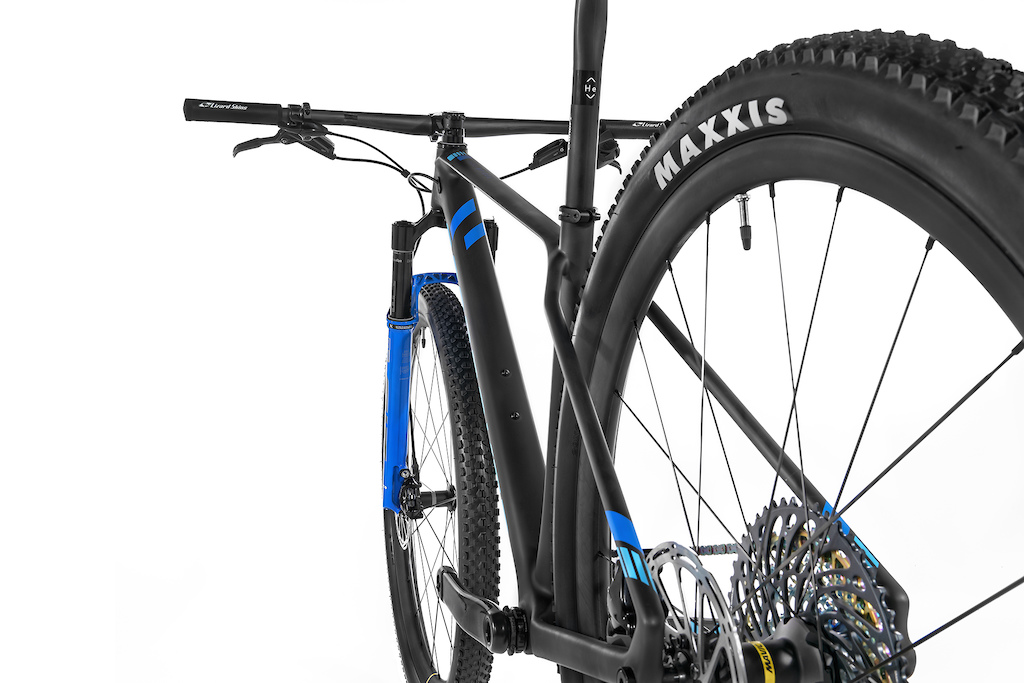 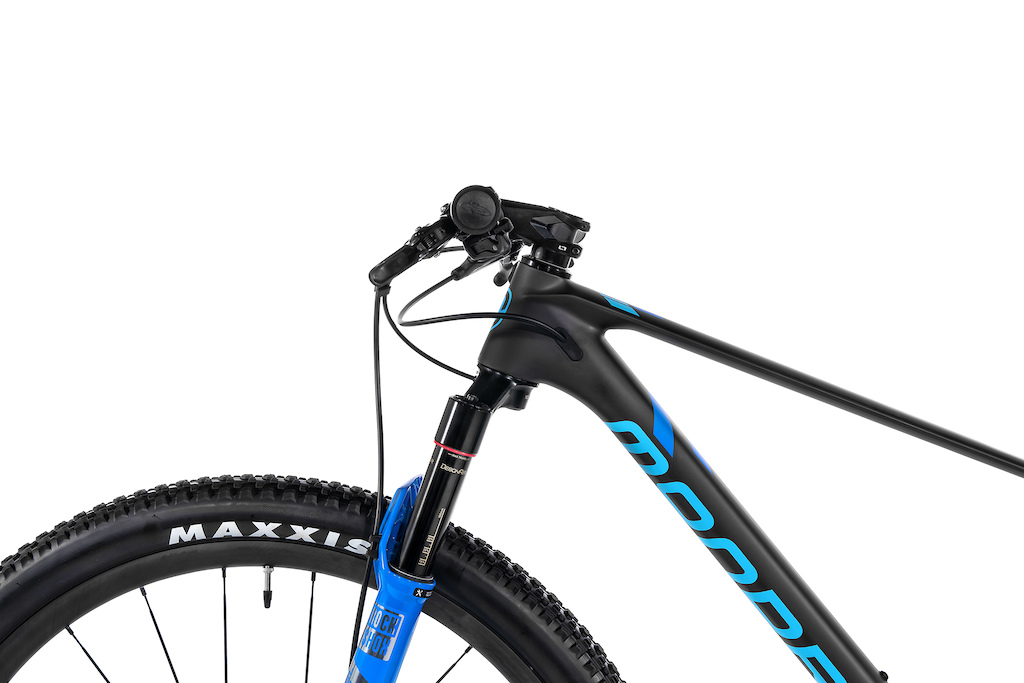 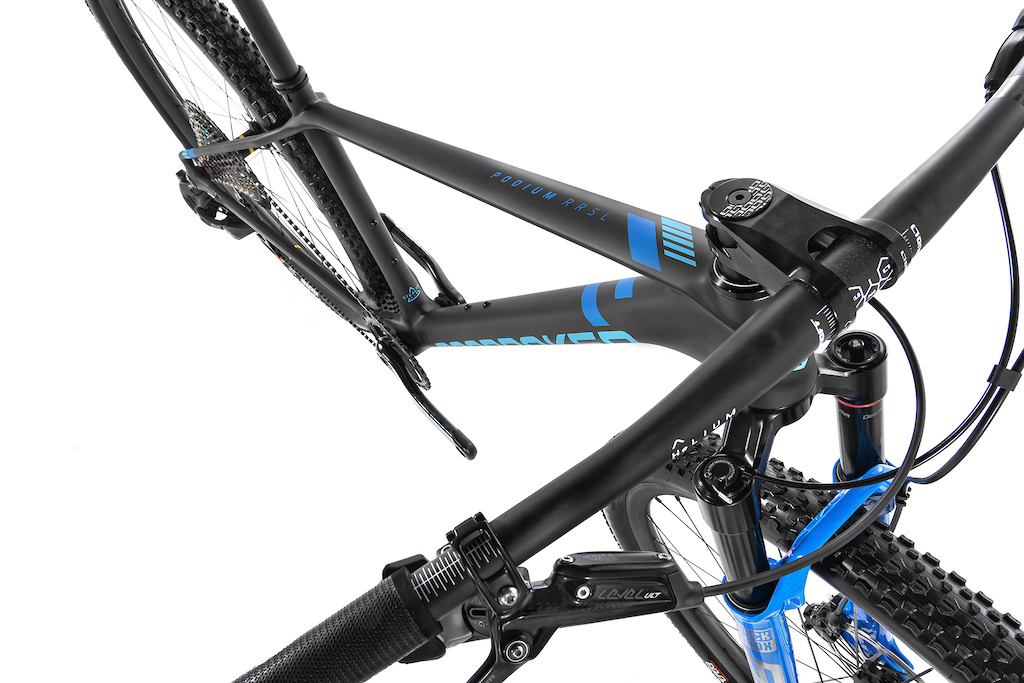 That weight is for a painted frame but without any hardware, cable routing, protection and with the threaded BB interface. According to Mondraker they could have gone quite a bit lighter with tha press fit BB but chose to go down the threaded route.

Information is currently a bit thin on the ground about how Mondraker actually achieved the crazy low weight. Lots of the secrets to light hardtails is contained on the inside, woven into the layup, fibers and resin used. New options are always being developed, refined and found in the bike industry, so it's likely that the Podium is using some of the latest available fibers and resins, along with a meticulous attention to detail in the layup schedule to achieve the low weight.

But the Podium does carry on the theme from their ridiculously light F-Podium full suspension XC bike that we saw early last year. That bike used German company 3C to aid in the composite engineering of the frame and ultimately bring the Stealth Air Technology badge to the F-Podium and now the Podium hardtail.

Mondraker also saved some weight by making the tubes more slender and a tiny bit smaller on the diameter. They did this while apparently stiffening the bike in the areas they saw that it needed to be and adding some built in flex where they could to bring some comfort.

It seems that the 775g weight tag isn't just reserved for the top end RR SL variant, with all models receiving the same lightweight frame. 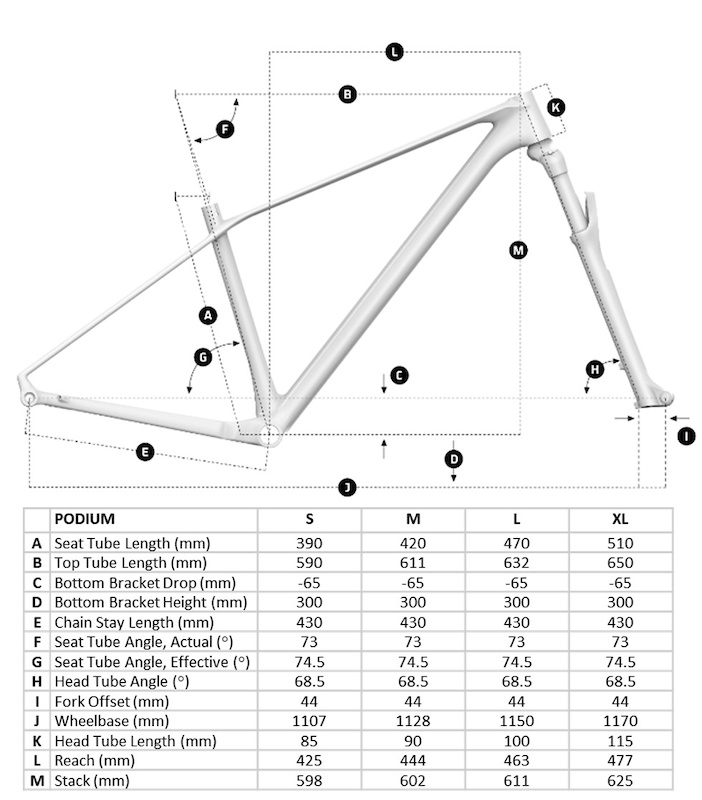 Only the Podium Carbon R uses Fox suspension and Shimano drivetrain and brakes, while the other three bikes all use RockShox SIDs and SRAM drivetrains and brakes. The top end Podium Carbon RR SL has a SID Ultimate RL fork, Level Ultimate brakes, XX1 AXS and a Mavic Crossmax XL wheelset. 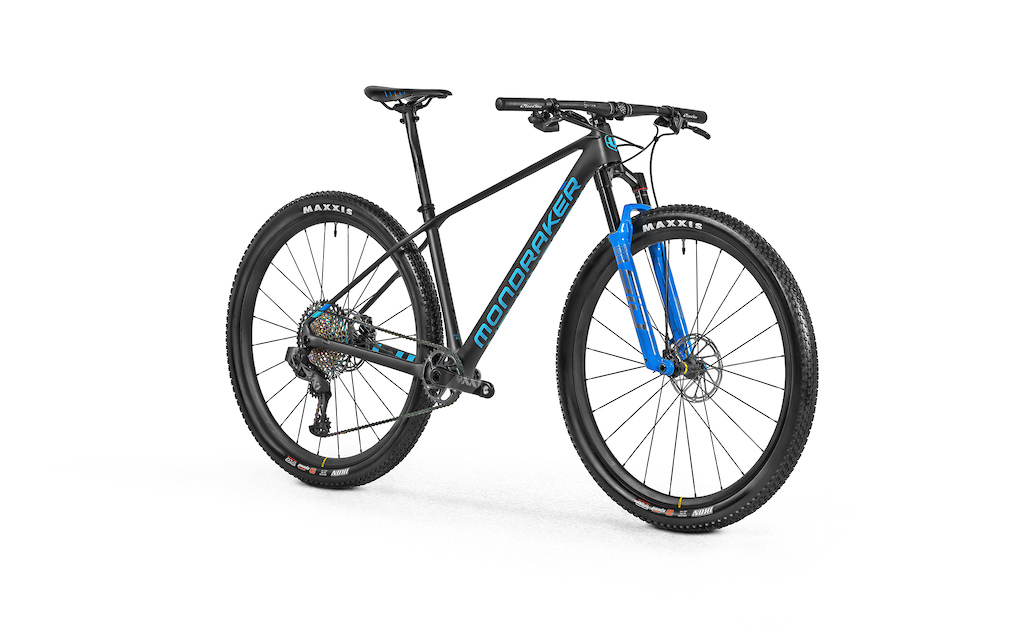 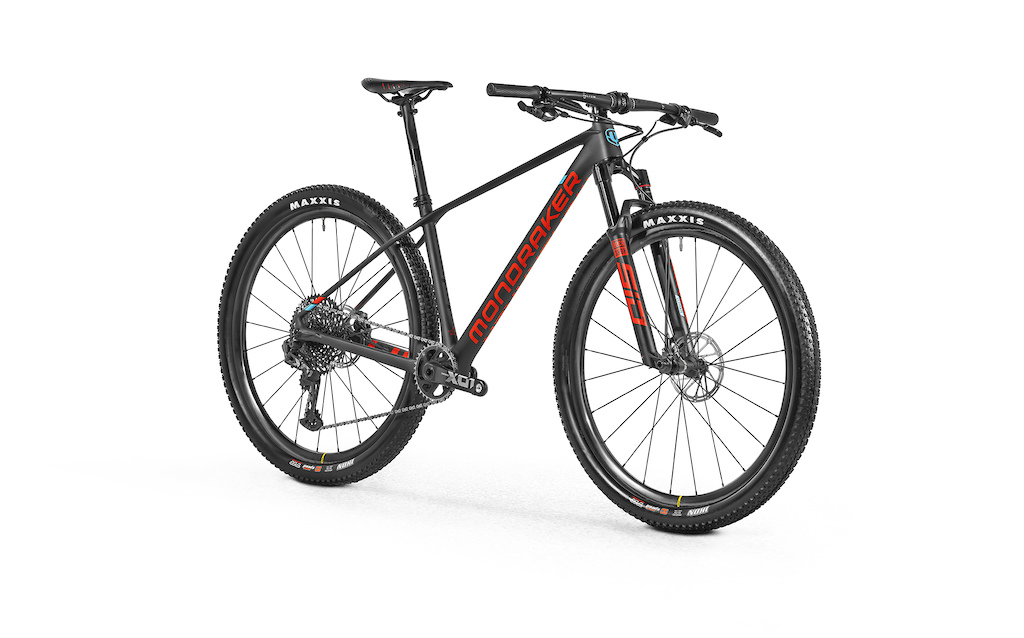 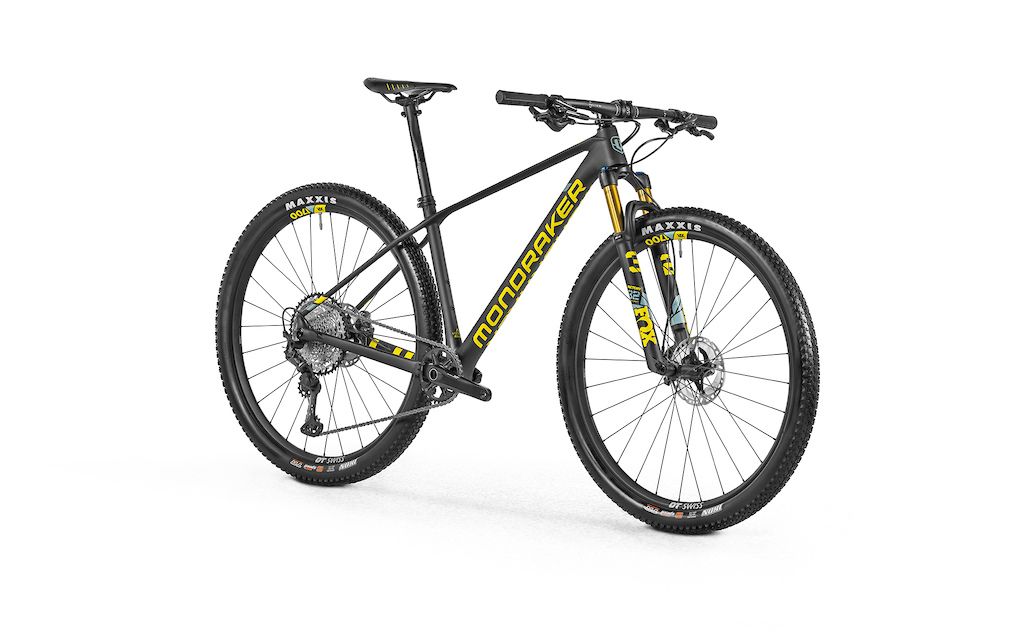 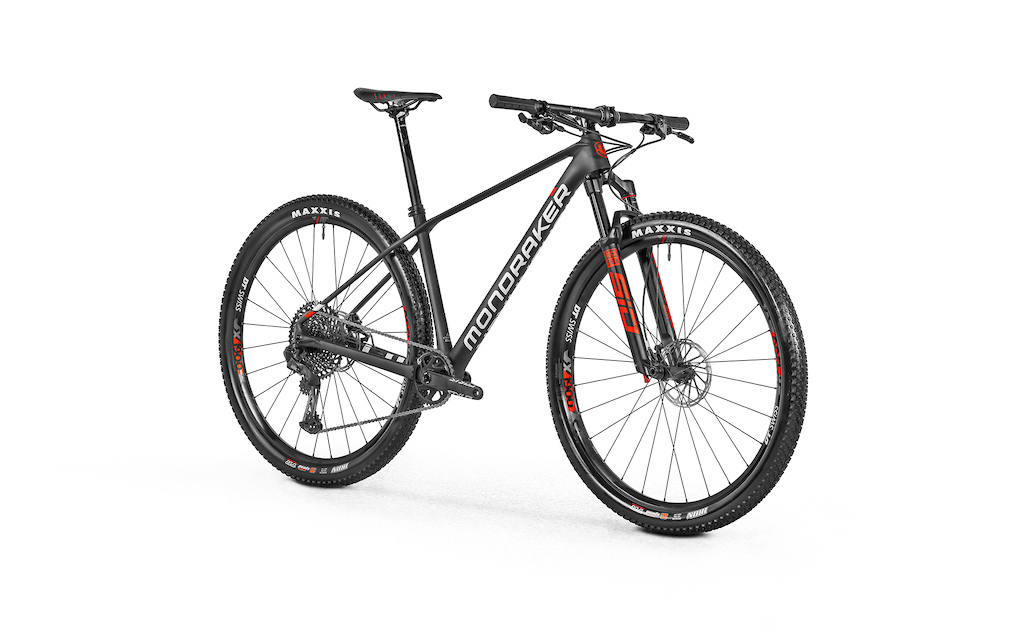 Pricing starts at an estimated €4,199 with more information on the higher models to come soon, and also available at mondraker.com.

mhoshal (Aug 19, 2020 at 11:09)
@scott-townes: why you're just gonna get an article about how they went to far with the geo and the bike feels slow and shit to get around corner. I think that will pretty much sum it up.

I think i heard Yoann rode it?

iamsx (Aug 19, 2020 at 13:45)
@scott-townes: What if it was actually good, so the PB guys got together to start their own Grim Donut bike company... That would explain the months of silence...

Thirty3 (Aug 19, 2020 at 14:30)
@iamsx: I agree 100%. For the last two years pinkbike told their story about designing the bike, about the factories and bike production. Its obvious that PB is going to sell the bike. Patience grasshopper.

But does anyone else think that the grim doughnut merch looks a bit “suggestive”? I’m sure I would get some odd looks if I wore a grim doughnut t shirt to church you might say...

bmied31 (Aug 19, 2020 at 7:05)
That is insane and doesn't feel safe, but I'm sure it is. My "light" carbon road bike is just over 16 lbs and somehow they got a xc bike with a suspension fork within a rounding error of it. Pretty impressive.

lyfcycles (Aug 19, 2020 at 10:50)
@nskerb: There is. They could go MUCH lighter with road bikes if they wanted to. They've been making road bikes light enough that you had to make sure your pedals weigh enough to make it legal for years already.

CapedBaldy (Aug 19, 2020 at 11:35)
@lyfcycles: totally. in fact, pro roadies sometimes have to add weights to their bikes just to meet UCI regulations

bmied31 (Aug 19, 2020 at 12:54)
@CapedBaldy: That said, thanks to how light they can make them, they can add disc rotors/brakes, more compliant frames, and suspension tech into them. I wouldn't be surpised to see the UCI lower the legal limit soon.

Hydrophobic (Aug 19, 2020 at 14:55)
I just weighed my aluminum road bike. This bike was a total of $2k, back in 2009, has no carbon anywhere on it, a steel seat tube and a TOOL BAG, and it was 15.8 lbs. True superlight road bikes can go below 10 lbs fully built, but they don't because of minimum weight requirements, so they build them heavier and put that weight into things like aero tubes, deep rim wheels, compliant/comfortable designs etc. I'll also add I weight 205lbs and this was a large frame, and it's more than strong enough for me lol.

srjacobs (Aug 20, 2020 at 5:17)
@CapedBaldy: Pro road bikes are so light they have to add electric motors hidden inside the frame to make them weigh enough to meet UCI requirements

I'm not saying you can't get an aluminum one under 16 lbs, but it would require a lot of work and stupid spending.

vjunior21 (Aug 19, 2020 at 9:05)
Hopefully they did not design the rear triangle in collaboration with Pole Bikes. LOL

thedirtyburritto (Aug 19, 2020 at 8:04)
I think a lot of folks here would love to get some real Roberts style nitty gritty on how this type of thing is done. A lot of folks just dont understand how much work goes into a high end carbon frame.

@ Anyone at Pinkbike....why doesnt the @ function work here with all your names?

Cleveruplink (Aug 19, 2020 at 8:38)
Enough with this year's XC hardtails, where is the new batch of XC full bouncers? Surely the Tokyo course would have been raced on full suspension and I only recall seeing the Epic and the Scalpel get an update this year...

NorCalNomad (Aug 19, 2020 at 9:35)
Well if I remember the IOC rules the product only has to be available to the public within 6 months of it being used at the games. So maybe some other companies are keeping things closer to their chest. But with how long development on frames takes there really isn't that much of an advantage.

aharms (Aug 20, 2020 at 10:25)
There are plenty of completely new bikes out there as well as some updates. Transition Spur, Revel Ranger, YT Izzo to name a few

betsie (Aug 19, 2020 at 9:01)
7.8kg is great for a production weight weenie bike and does well in the normal weight weenies categories too.

or 4.5kg!!! I would be scared of breaking this for sure.
www.mbr.co.uk/news/bike_news/lightest-mountain-bike-373960

No gears, no suspension, pedals that are frankly dangerous to ride on, spindle that looks like it was made by an angle grinder. Sorry, that's a bike shaped object, not an MTB. If it doesn't function, it doesn't matter what it weighs. A 30lb ridable bike is better than any 10lb bike that is just there for bragging rights.

That first Scale is pretty fly though.

TucsonDon (Aug 20, 2020 at 13:11)
Actually the accent decals do match the color. Looks pretty good, maybe better than if all the logos were the same color.

southoftheborder (Aug 19, 2020 at 17:34)
So what was old is new again. The weigh wars were in all the rage 20 years ago and after exhausting the DH/enduro/all mountain/trail/downcountry segments, it's time for the brands to remember their XC gamma and begin battling for the lightest bike title. I guess once that's done we'll see weight battles on the DH segment again. Maybe in 2022.

Jaylynx (Aug 19, 2020 at 7:15)
With the increasingly rugged courses for XC, I guess the weight savings allow for more consideration for stronger casing tires, droppers, and possibly tire inserts?

ChrisNJ (Aug 19, 2020 at 12:45)
Thats super light for being geared and front suspension. I'm at 17.2 lbs on my rigid singlespeed. Crazy to think making this rigid w/ one gear would get it down near 16.0. Never thought I'd see the day mountain bikes are closing in on the UCI weight limit.... for a road bike

justwan-naride (Aug 19, 2020 at 22:39)
Looks like while they were hunting grams they lost the integrated stem that was the visual characteristic of this bike. Good to see that modern XC race bikes don't want to kill the rider with their geometry though. That said, I do hope one can use a dropper on it, as esp. on a ht it is a great thing to have despite the extra weight.

tacosareawesome (Aug 19, 2020 at 23:41)
And my steel retro 700c downgravelcrossmonstercityskidder is like 27 lbs but my consolation prize is I can run over plastic bikes with aplomb and I get bonus old man grouchy street cred. All that's a euphemism for I'm slower than you guys.

mtb-thetown (Aug 19, 2020 at 14:07)
Just built a full custom hardtail. Started with a Transition Throttle frame, size large weighed 1600 grams. Full build with a Marzocci Z1 is around 26.5. That is 10 pounds lighter than my Patrol and I can feel it, but I don't think it would be worth giving up how capable this bike is to shed a few more pounds.

DabaZei (Aug 19, 2020 at 15:11)
The real reason why this frame is lighter is because Spanish Unicorn Hair weigh less than German Unicorn Hair. It's gotta do with the diet, I am told.

Jshemuel (Aug 19, 2020 at 7:59)
How does Mavic keep hoodwinking manufacturers into speccing their garbage mtb wheels as OEM

thedirtyburritto (Aug 19, 2020 at 8:08)
Its called price pressure. Mavic is on life support, Canyon comes to them with a promise of volume sales the likes of which are pretty rare for Mavic these days, but the hook is the price that Canyon is willing to pay. Mavic can take it or leave it, and Canyon gets a wheel that most folks will percieve as at least OK if not good for a price they could not get anywhere else. Obviously DT wouldnt play, otherwise we would be seeing their new stuff here.

Jshemuel (Aug 19, 2020 at 9:12)
@thedirtyburritto: I mean, yea, I get that. it just brings the whole build down, which seems like it would be a drawback for someone who wants to spend beaucoup bucks on a bling-bling new hardtail rig

TucsonDon (Aug 20, 2020 at 13:13)
Lack of routing for a dropper and the Mavic wheels with UST make me look past this. Otherwise, I do really like the geometry. I'd love to get rowdy on this bike.

vinay (Aug 19, 2020 at 8:03)
I guess you'd be fine with that, would make for a fun bike. You'd only need to resort to external routing for your dropper post it seems. No big deal, there are enough brands offering that (though unfortunately it seems YEP quit doing that) and of course you can use tie wraps or whatever it takes to guide the cables. The seattube does have bottle bosses though. If they're open, you can just remove the bolts and you have room to slide the saddle down. If these bosses are blind though (so closed), even with the bolts removed you probably have limited room for the seatpost even though the seatpost appears to be fairly straight.

Patrick9-32 (Aug 19, 2020 at 7:17)
If you weigh 300lbs you wouldn't buy a 17lb bike. Your comment is like looking at a downhill bike review and asking how it pedals up the hills with an XC racer on board. If you use a bike for something it wasn't designed for it probably won't be very good at it.