The ultimate form of head to head mountain bike racing returns to Sheffield City Centre from 17:00 GMT (18:00 CET 09:00 PST, 12:00 EST) to celebrate the Outdoor City Weekender. The devilishly difficult Howard Street Dual course will pitch the best riders against each other and the resulting spectacle will surprise and delight seasoned race fans. Finals will be at 19:00 GMT and to enhance the drama we will be racing in the dark; once the sun goes down the course will be lit up by Hope Tech Lumens making the elbow to elbow action even more entertaining. 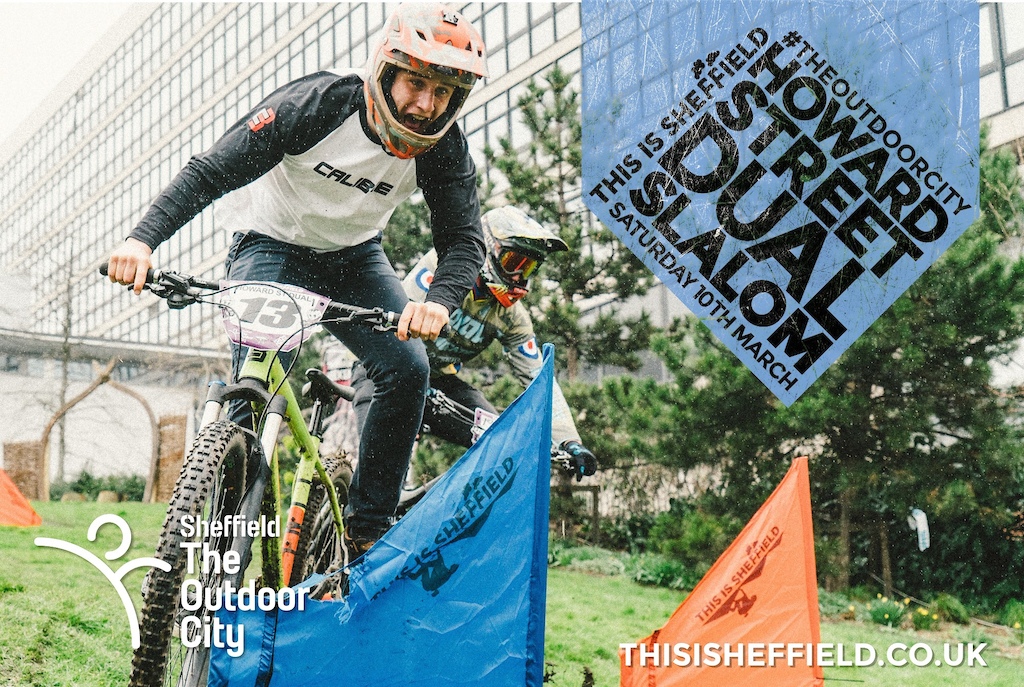 With a host riders from World Cup winners to local pinners, the scene is set for a great evening of racing. 32 men and 16 women will battle it out to be crowned champion through a series of nail-biting knockout rounds. Lining up this year are a host of well-known riders and just as many giant killers aiming to knock them off their perch. For the lads Sheffield’s own Steve Peat will be trying to go one better this year and get on to the top step where he’s stood so many times before. However, his 50:01 brothers will be doing their best to stop him. Josh Bryceland, Josh Lewis and Hardline winner Craig Evans, Sam Dale and Matt and Dave Hockenhull will be stepping up to create some on-track action at this year's event.

Last year's winner, Airdrop’s, Brett Penfold and second place Ben Moore are back again to defend their crowns. Elite downhill pinner Jono Jones is making his way up from Woburn, too. Team Cotic will be represented by the Rocket Man himself, James Swinden, who will doubtlessly be chased down by this younger brother and This is Sheffield Winter dual champion, Will Swinden, and Straightline Chay Granby. 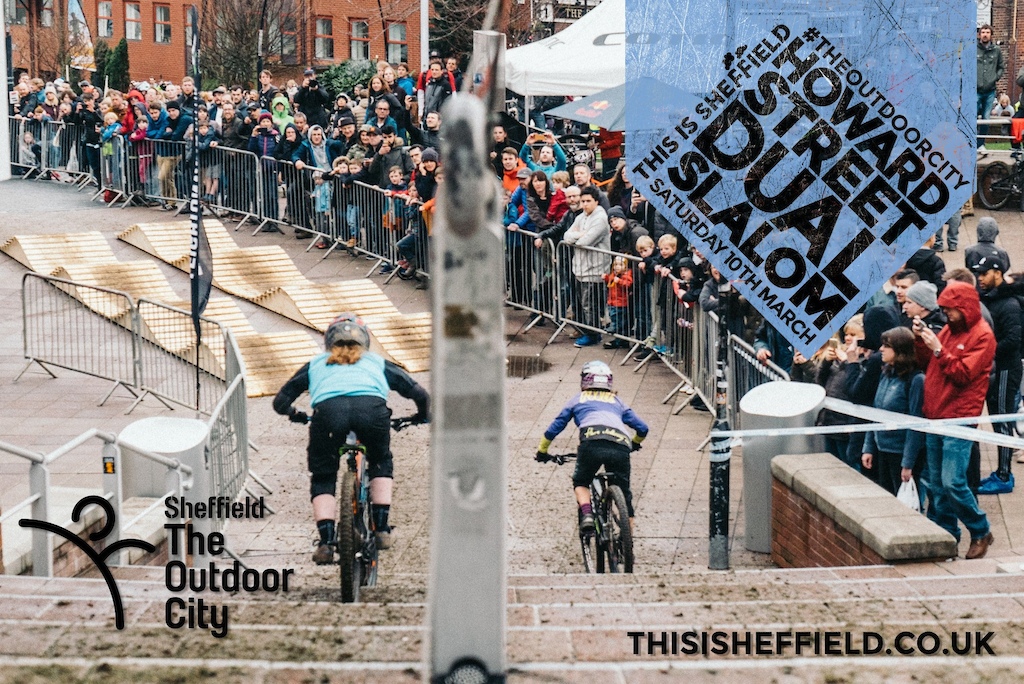 The challenge from the lasses is headed up by last years winner Carrie Poole who held her 4-month-old son aloft on the podium. She’ll be chased down by last years runners-up Anya Tolwinska, Ellie Dewdeny and Katy Thorpe. BMX superstar Chloe Taylor will be challenging for the top step alongside downhiller Becci Skelton.

Join us for a Saturday night of thrilling racing presented by Richard Cunnyngham and Toby Parodi. 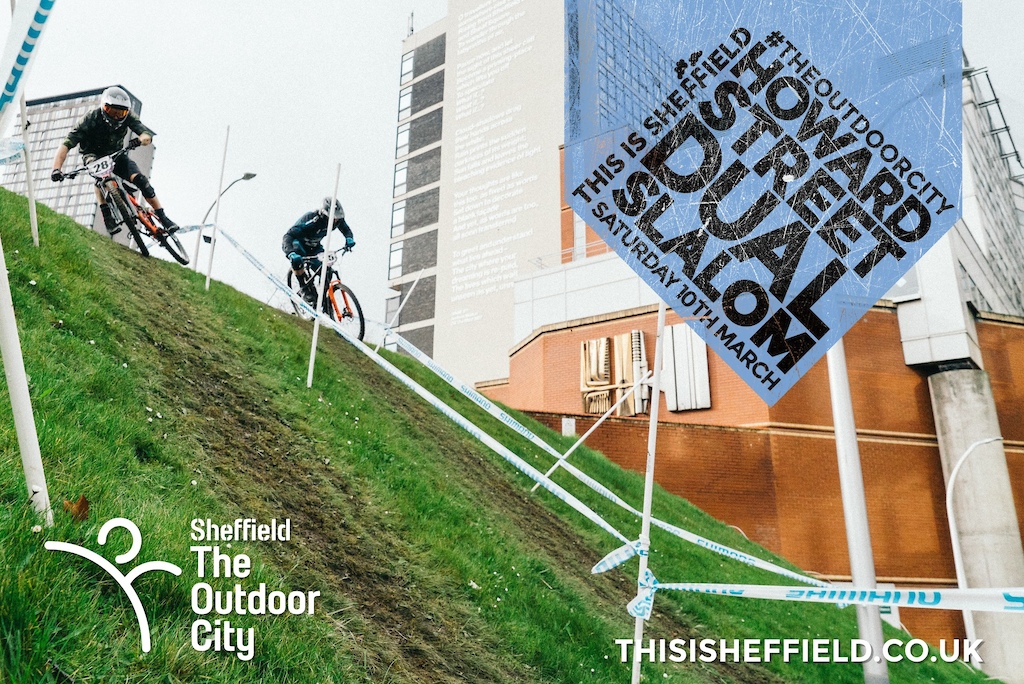 brianpark Mod Plus (Mar 10, 2018 at 9:20)
We're driving our numbers up by making everyone refresh the page over and over.

(for real no idea, just waiting for the YouTube stream to get going)

Bjessup (Mar 10, 2018 at 9:15)
i am refreshing on two computers both on yt and pinkbike hoping my boi will easey is fast go on ease

gibbon-on-an-orange (Mar 10, 2018 at 10:24)
There seems to be a whole lot of waiting around considering it's a 30 second run. Not exactly exciting if you're Joe public standing in the cold watching nothing for the majority of the time.

Samuli-1 (Mar 11, 2018 at 3:35)
@iamamodel: same here. Seems like an interesting event, but they should cut the waiting parts away from the replay.

sooner518 (Mar 11, 2018 at 7:27)
@iamamodel: i just spent about 3 minutes clicking around the video and literally didnt see one second of riding. the closest i saw was a couple guys walking their bikes back up to the top of the track....

uksgdh (Mar 10, 2018 at 9:36)
so I guess this won't be showing anymore as it's highly unlikely they'll hold the event just because the online viewers can't see it. Shame.

stikmanglaspell (Mar 10, 2018 at 13:36)
@AlexJ23: Ugh, does anyone not know how slalom works? we've been doing it for 30 years, and another 60 on top of that in ski racing. In slalom, there is a MAXIMUM 1.5 second differential allowed, so if a rider crashes on first run, mechanicals, etc, the MAX time diff is 1.5 secs, its been this was from the dawn of time. SO peaty enters the second run with a 1.5 disadvantage.

2nd and final run, the other guy also fell, so they BOTH have a 1.5 differential, causing a tie, technically, and in the result of this-the rider who WON the final round wins.

"(f) After the qualification runs, in the final heats, a rider may lose by no more than 1.5 seconds. This maximum differential applies to slow runs or penalties resulting from jump-starts, missed gates or other infractions. A rider who does not finish the run will be eliminated.
(g) Ties in split times can be broken in the following ways: If overall times are recorded, the tie is broken by comparing the overall times on the course that both riders completed. If only split times are recorded the winner of the last run is the overall winner."

The winner should be decided by overall time otherwise your winner is the guy who went slowest! Ugh!!!!!

si-paton Plus (Mar 11, 2018 at 15:12)
@stikmanglaspell: As always you are correct. The rule should read..
After the qualification runs, in the final heats, a rider may lose by no more than 1.5 seconds. This maximum differential applies to slow runs or penalties resulting from jump-starts, missed gates or other infractions. A rider who does not finish the run will be eliminated.

As it says " If overall times are recorded, the tie is broken by comparing the overall times on the course that both riders completed."

G-A-R-Y (Mar 10, 2018 at 13:51)
Commentator said it was 2 secs max added. so if you add 2 secs to each heats winning time it ends up a draw. I suppose it must've come down to Steve having the slowest overall time after the cut rather than having the fastest single run time out of the two runs. Sorta makes some sense seeing as one lane was faster than the other. Maybe.

fadomlarge (Mar 10, 2018 at 9:09)
i could beat every1 down the track anyway i just want to see the choppers who are slower than me
Post a Comment