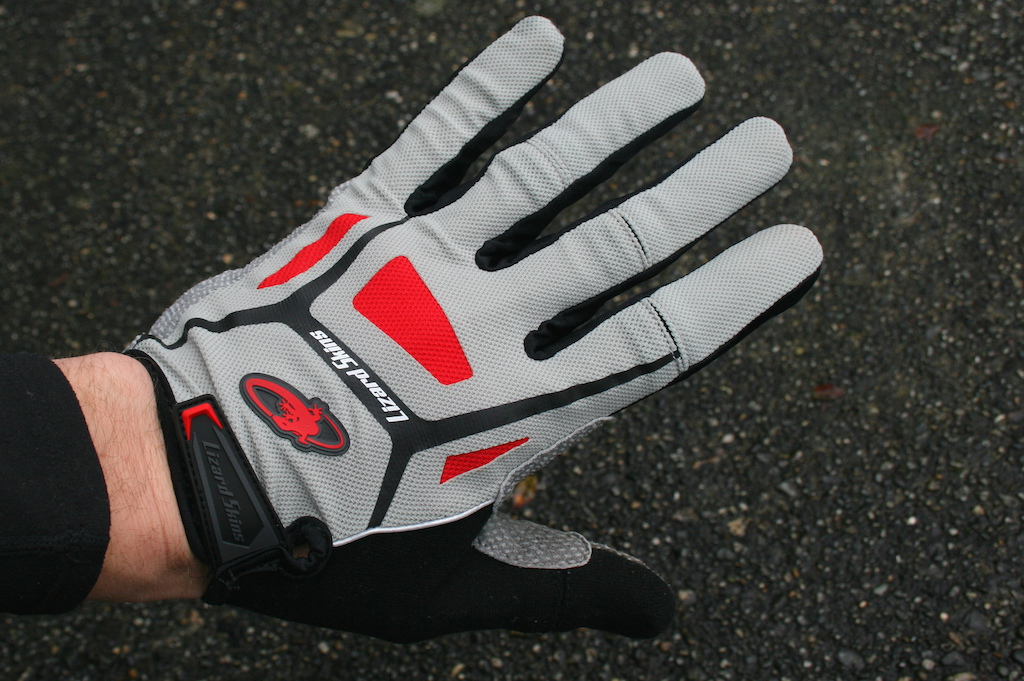 The Monitor 1.0 glove has a snug, lightweight, and sticky feeI, but doesn't provide any serious padding or protection. Made by Lizard Skins, these gloves claim touch screen compatibility and have a built in gusset feature for finger movement. $45 USD.
As an important contact point with the bike or sometimes the dirt, riding gloves see a lot of abrasive wear, sweat, dirt, and frequent trips to the washing machine. If you ride hard, gloves can sometimes show signs of fatigue sooner than a soft compound tire. Long fingers and hard braking can further stress most gloves leading to finger tip holes that can leave you feeling like a trail hobo. I generally have moderate expectations for a light weight pair of gloves and so far the Lizard Skin Monitor 1.0 has managed to meet them.
Product Features:

Lizards Skins has come a ways since its start in 1993 when it introduced the neoprene boot to keep mud and water out of those 68 millimeter travel state of the art suspension forks.Like your suspension travel they have grown significently to cover a fairly wide variety of protective soft goods and grips for both mountain and road disciplines.The company claims to have customers in over 70 countries worldwide and out sources some of its production over seas while maintaining a US based manufacturing facility. lizardskins @LizardSkins
Materials and Construction

The Monitor 1.0’s backside construction is pretty much seamless and mostly made from Nylon Spandex. It's a lightweight, stretchy, breathable fabric that makes for a snug fit. The glove’s palm side is thicker and made from Clarino, a synthetic leather-like breathable fabric that is generally more durable than many glove materials from years past, and used by other mountain bike glove makers. Fingers, thumbs, palm pads and wrist trim all appear to be single stitched with thread. An outer thumb panel uses a medium weight absorbent material for a sweat wipe. Index and middle finger tips have small silicone laminated strips supposedly for better grip and to help make the gloves compatible with touch screens.The glove stops just above the wrist bone and is closed with a 1.75 inch long rubber and velcro closure flap. 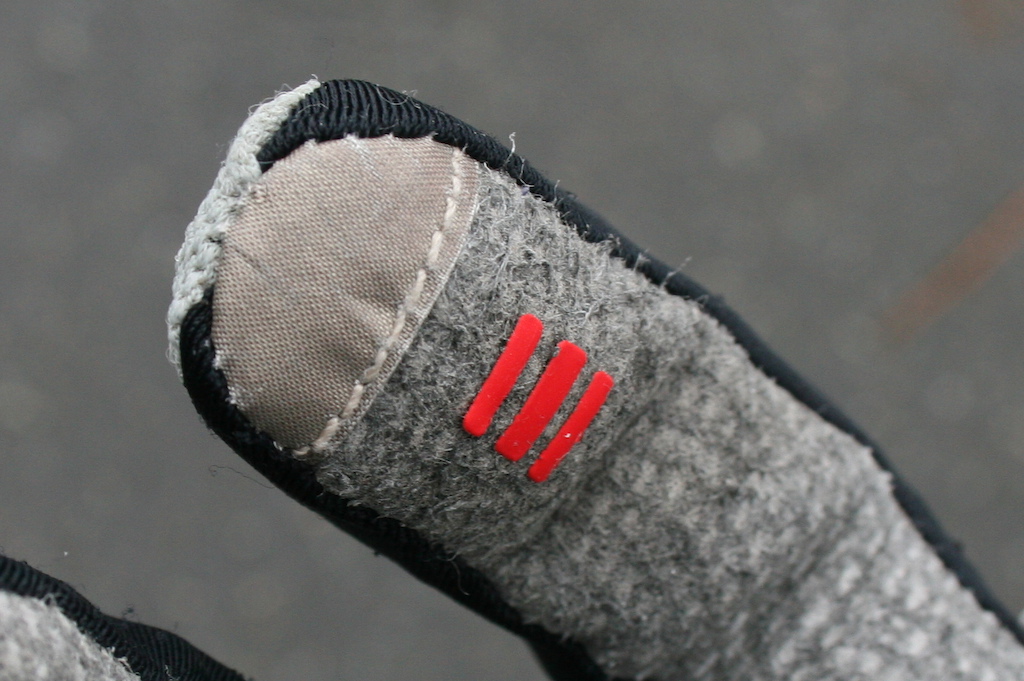 If you really need to check your email or report trail saboteurs, these gloves are advertised as touch screen compatible. 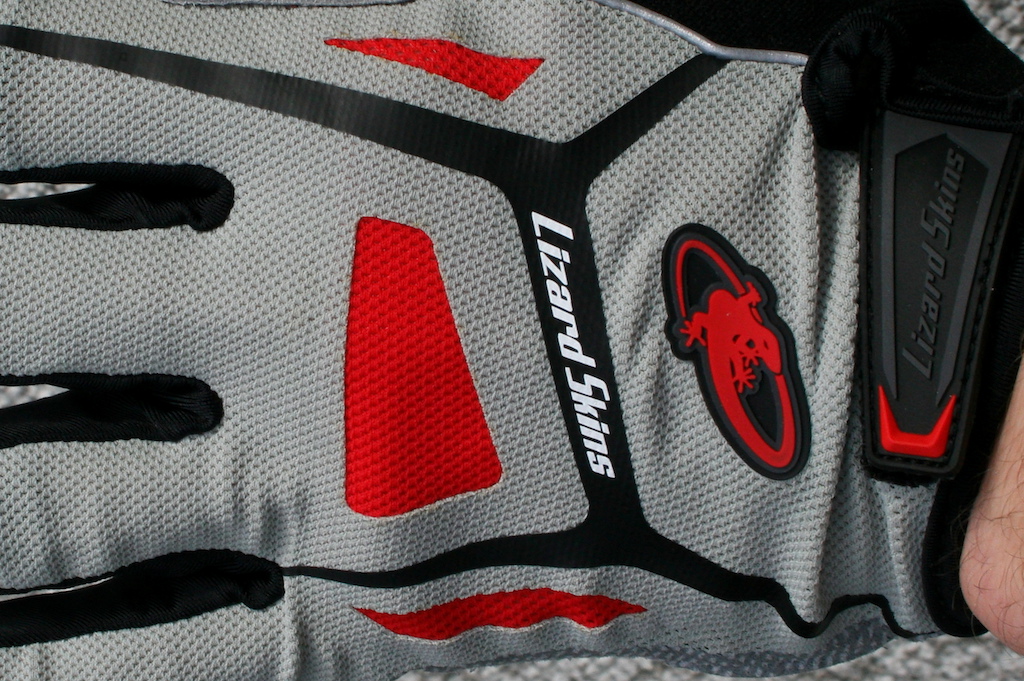 The backside construction is stretchy, seamless, and made from Nylon Spandex. 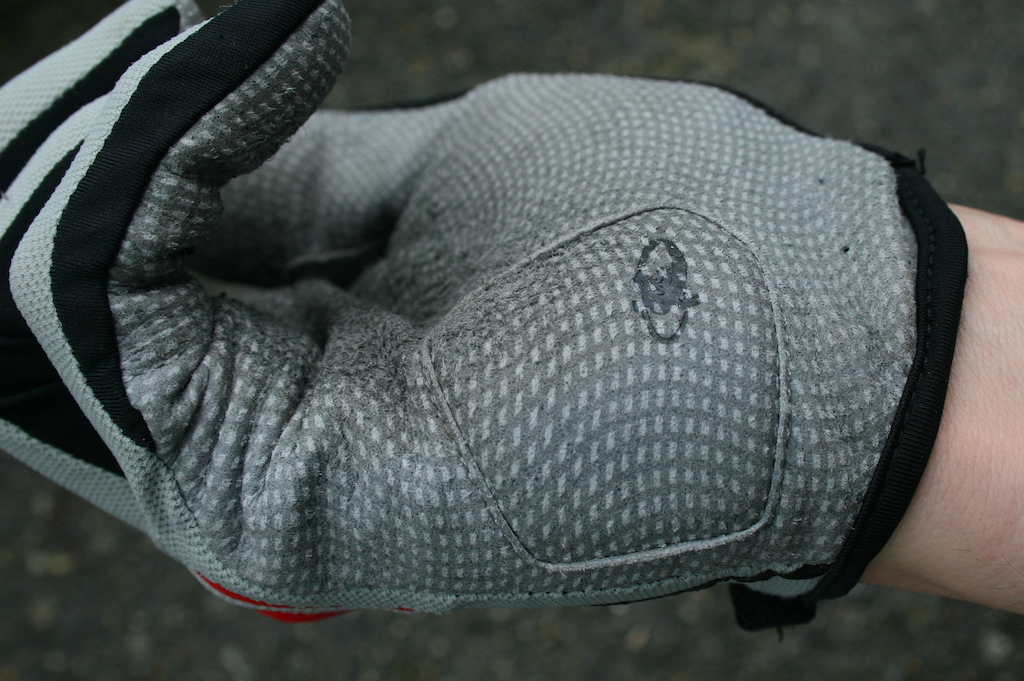 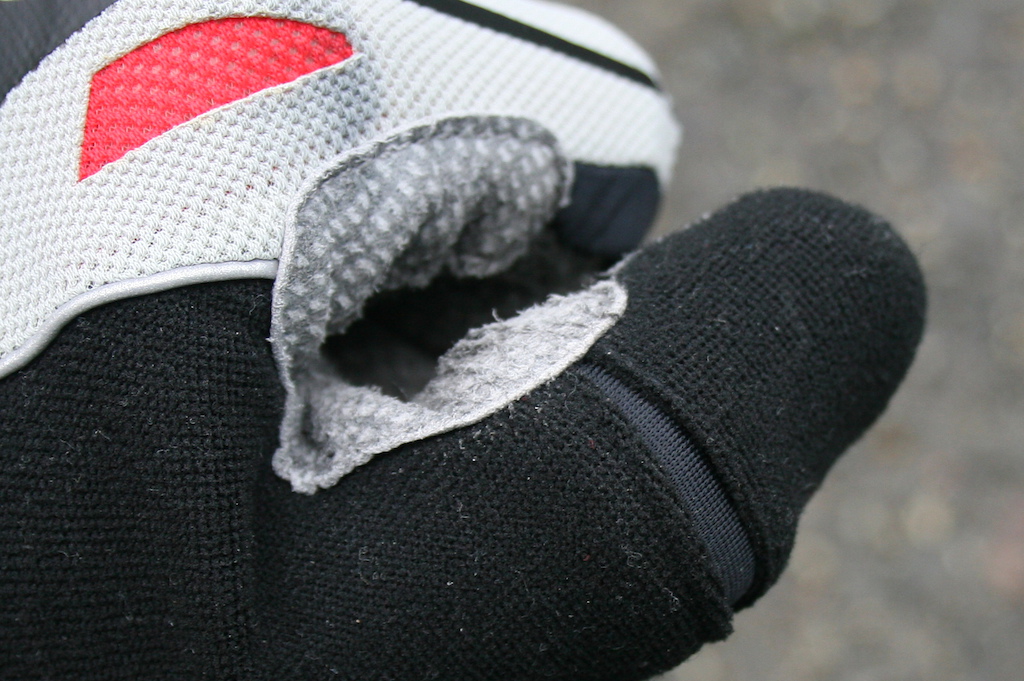 It uses a softer medium weight fabric for a sweat wipe.

Putting on fresh pair of gloves is always a nice way to start your ride and the Monitor 1.0 was a comfortable fit. The extra-large gloves were test ridden using both firm thinner lock-ons, and softer thicker slide-on grips. In dry conditions the contact was very positive and I almost asked ‘are these too tacky' , but I think not. In wet conditions the palms did soak up water and stretched out a bit, but still felt good and didn't slip even with a relaxed grip on the handlebars. 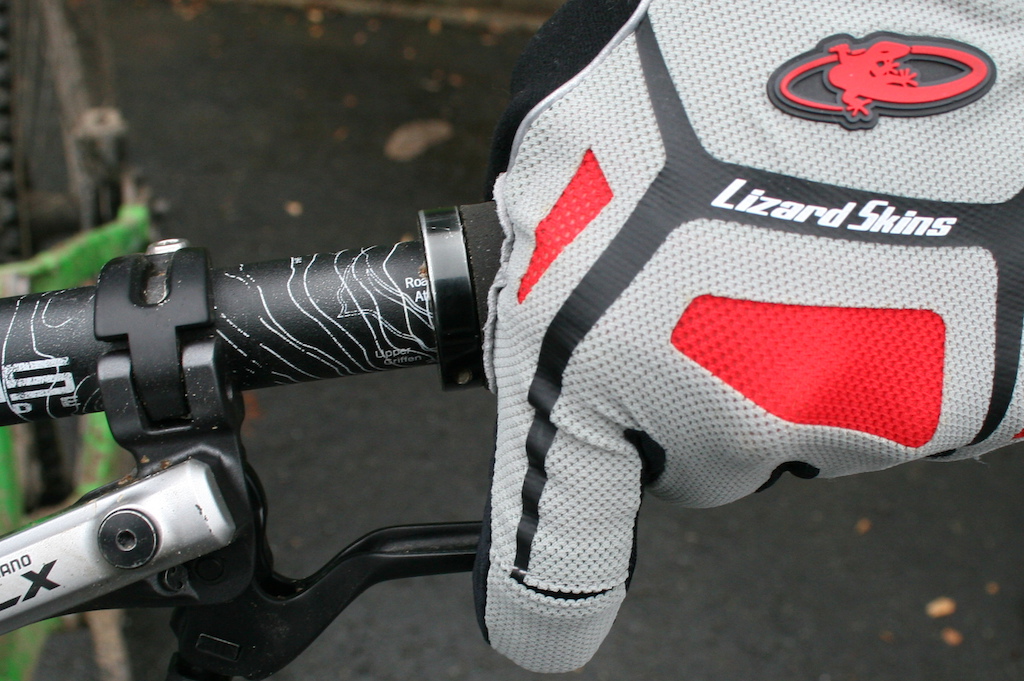 The design allowed for good hand mobility without noticable inside edges that can cause irritation during the ride. 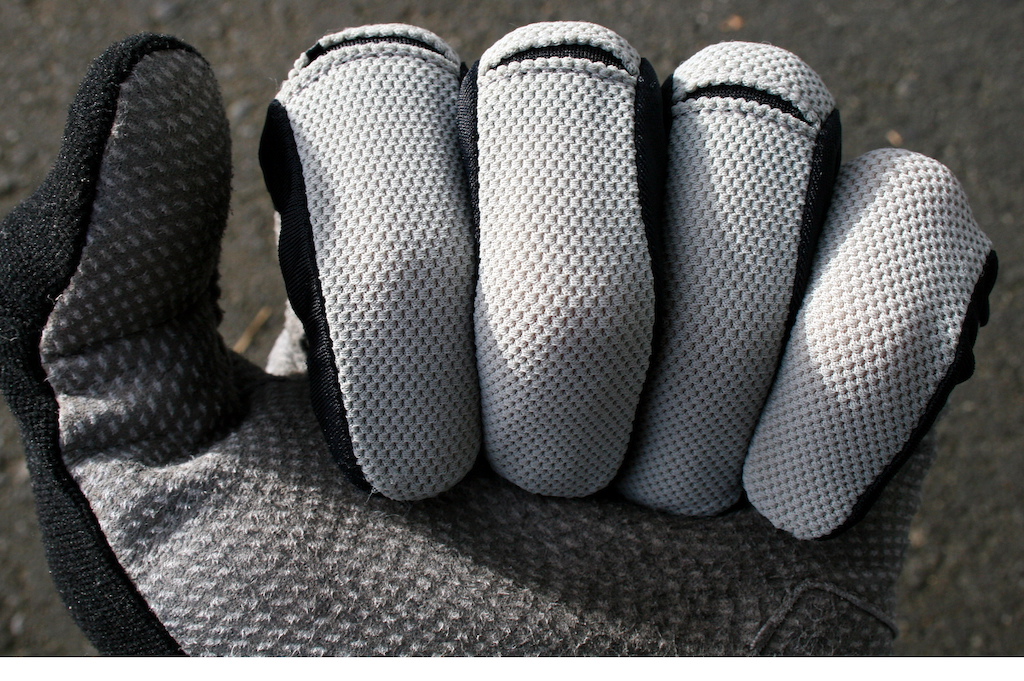 Fingers and thumb have a split and gusset feature built in at the knuckles for articulation.
All the fingers and thumb have a split and gusset at the knuckles for articulation and this feature is noticeable and works well. Having long fingers I initially could feel the seams at the end of each digit and found this a bit irritating. After a ride or two the finger tip seams softened up and it was not an issue. A small pad is located on the palm and allows for a rest position on the handlebars when cruising or climbing. The Monitor 1.0 is sometimes listed as a downhill glove but lacks any padding or firm outer protection that I normally associate with downhill or freeride models. Usage really comes down to person preference. I’ve had problems with velcro gloves closures in the past and will just cut them off if they fail me. To date the Monitors velcro flap has worked well and has never pulled open while riding. After the first machine wash you can notice the Clarino palm begin to pill. However it did not continue to degrade after several washes and even some time in the dryer (which the care and content tag does not recommend!)The outer thumb section made from a black medium weight material was adequate, but lacked some of the softness and absorbency for good sweat or nose wiping action on the trail.


Touch screen compatibility is a newer feature glove makers have been thinking about and the two most common screens types used in devices are resistive and capacitive. The first relies on mechanical pressure while the second uses changes in the screens electric field caused by something conductive like a finger. There are of course other variables that can affect touch screen function on the trail including wet weather, dirty gloves, and the manufacturer. We had mixed results testing touch screens in these gloves and found that some iphone screens were more problematic to use on the trail than Samsung. The Monitor 1.0 performed no better or worse than similar styles from other brands. You might want to test your glove and phone combo. 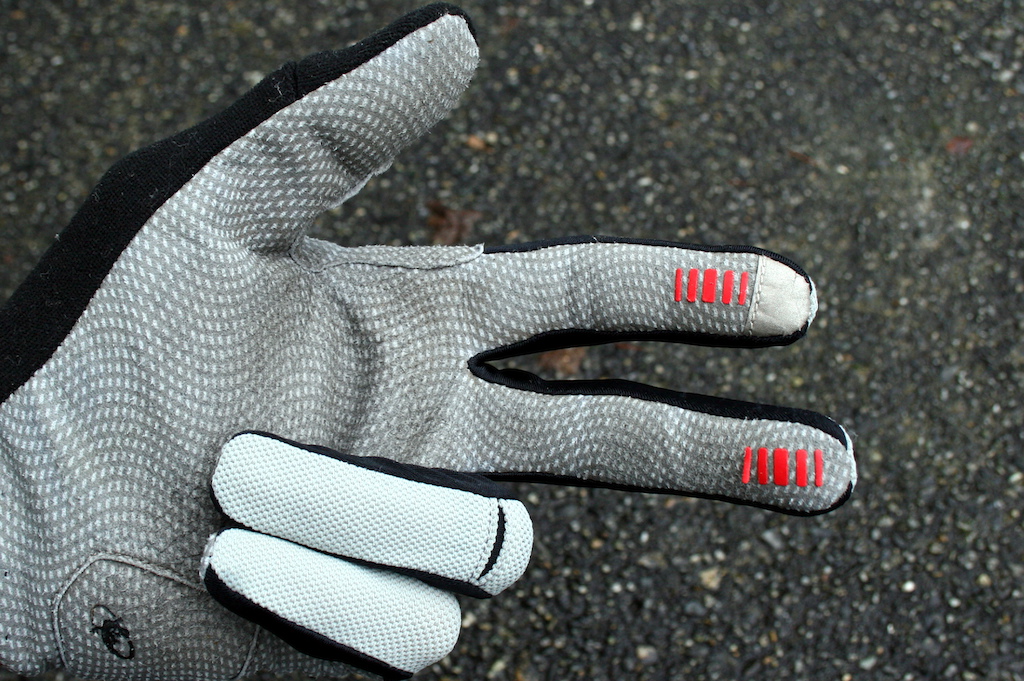 Stats: Age: 47 • Height: 6'1” • Ape Index: +6" • Weight: 180lb • Industry affiliations / sponsors: N/A
The latest addition to the Pinkbike Technical team, Chris Johannes is a seasoned veteran or an old dog depending on your point of view. He's done his time on the shop floor and in the mechanics pits of numerous bike shops including his own. In the early days CJ spent time on the race circuit chasing some of Canada's best cross country racers, and plans to keep riding off-road until his days are done. Based in Burnaby, British Columbia it's just a short trip to the North Shore trails. He worked in the engineering department at Race Face, and has spent more than a few years testing and breaking bike parts in the lab and on the trail. He likes a good debate, beer at room temperature, and his bike gear reliable.

poundsand (Mar 2, 2015 at 21:43)
Yeah considering they probably cost only a few dollars to manufacture

bigburd (Mar 3, 2015 at 9:41)
Shouldn't be using the phone when out on the bike anyway , leave it in the car or turn it off in your pocket , there are far more interesting things to be getting on with than un-social media , like riding your bike !

taletotell (Mar 3, 2015 at 10:12)
Strava is cool because you can set it in the parking lot and it will only measure your rank against established rides. There is no hurry. Also, turnes out phones have more accurate GPS than most GPS units. I'll look for the article that talks about it and get back to you.

bigburd (Mar 3, 2015 at 10:27)
Until its accurate within 1 maybe 1.5 meters at most then it's not really reliable as it needs rider honesty regarding sticking to the track.

taletotell (Mar 3, 2015 at 13:29)
iphone 5 came in first in a group of purpose built units. If it isn't good enough then you might as well toss your Garmin in the trash. Here is the link: www.singletracks.com/blog/gps/gps-distance-accuracy-test-smartphone-apps-vs-dedicated-gps

...I scream at the kid as I go tumbling off the boxcar on Freight Train.

rickaybobbay (Mar 3, 2015 at 12:28)
no i get that part. the trail maps is actually a really neat idea. haven't thought of that... there should be an app where you can search all the maps in an area, download them on your phone and use them out on the trail... or is there one already?

MasterSlater (Mar 2, 2015 at 22:15)
POC Index is by the far the most durable and comfortable glove I've had. It's not cheap, but it has none of the shortcomings mentioned here, and performs better than anything I've used.

mbl77 (Mar 3, 2015 at 8:13)
I bought some DNDs recently, but no velcro means they move slightly, and the reverse of the leather palm is smooth and slippery when wet, which is pretty much every ride here in humid conditions.

heissescheisse (Mar 2, 2015 at 21:04)
I've always found taking my gloves off rather challenging. What peasantry.

mate1998 (Mar 3, 2015 at 7:25)
"hopefully one ride season with no premature finger, fabric, or stitching problems" looks like your expectations are easy to pass...
tld air in it's 3rd season, still going strong. only glove i will ever buy

Mine are over a season old with 4-5 rides a week and plenty of hand first wipe outs. Still holding strong.

silverfish1974 (Mar 3, 2015 at 0:13)
Been thinking of buying those POC gloves for a while now but have heard a few mixed opinions so wasn't sure if I wanted to part with £40 for them. I did buy some Raceface Indy gloves which I'm very pleased with which I picked up for a bit under £25. I'd still like to try the POC ones and will probably be my next pair I buy to add to the glove collection.

One thing that annoys me with gloves is when the palms bunch up. My Raceface gloves do not bunch up, they're great.