Loic Bruni On Öhlins Suspension for 2017? 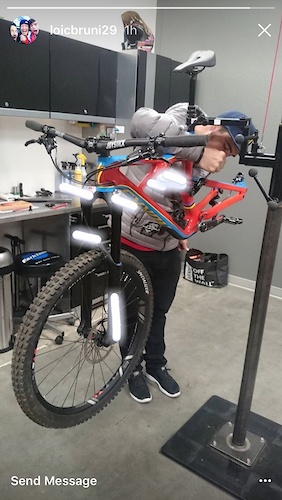 The shortest days of the year are here, and that can only mean one thing – internet speculation about the World Cup DH race scene is at an all time high. The list of riders who have announced they'll be on new teams for 2017 continues to grow, a list that at the moment includes Loris Vergier, Troy Brosnan, Luca Shaw, Manon Carpenter, Ruaridh Cunningham, and Reece Wilson among others. We likely won't see official announcements about where those riders will end up until after the new year, which means that deciphering cryptic Instagram and Facebook posts is the best way to get a clearer picture about what next season will bring.

Loic Bruni will still be riding for the Specialized Gravity team in 2017, but that doesn't mean he's free from the rumor mill. The big question surrounding the French phenom is what suspension he'll be running when the season kicks off in Lourdes. Bruni is especially adept at teasing his fans, posting up photos that reveal a little too much of his new bike, only to delete them shortly after, but at the moment all signs point to Öhlins suspension. The photo Bruni posted of his new Specialized Enduro clearly shows Öhlins' pinch bolt thru-axle design, and the yellow rebound knob at the bottom of the lower leg, while a closer look at the barely visible Demo reveals what appears to be the reservoir for Öhlins' TTX 22 coil shock. 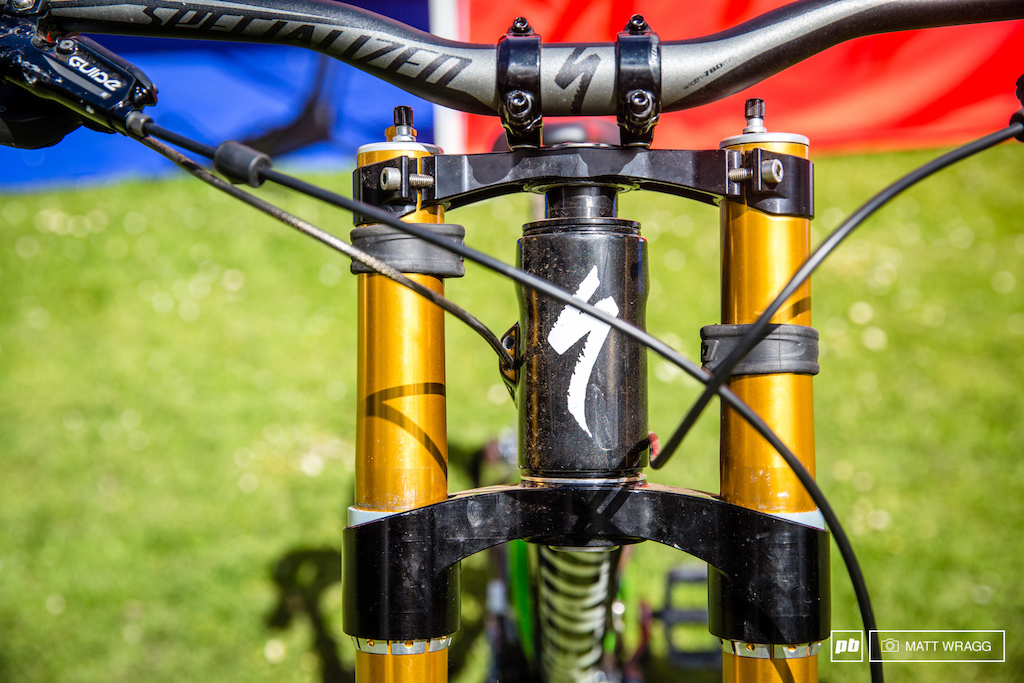 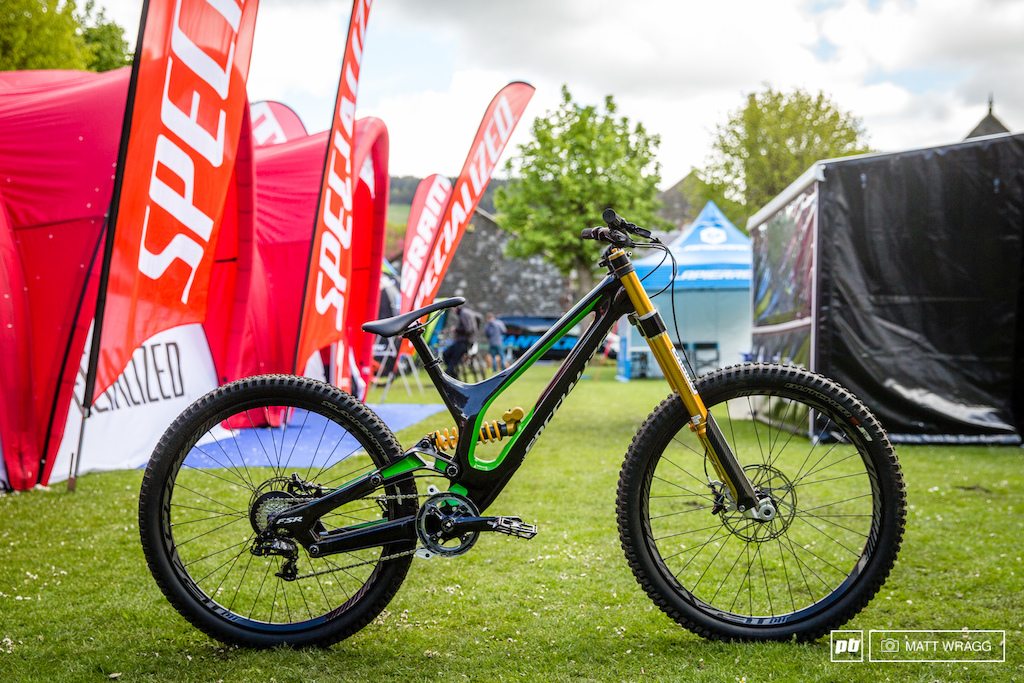 This prototype inverted fork was spotted back in 2015, but not much has been heard about it since.

What fork will end up on the front of Bruni's Demo race bike? That's a bit more of a mystery, and although Öhlins did have a prototype inverted fork floating around back in 2015, my money would be on the Swedish company debuting a more traditional design, something akin to a long travel, dual crown version of their RXF 36. At the moment, RockShox and Fox are the major players when it comes to elite level downhill racing but if Bruni does indeed make the switch and starts ending up on the podium aboard Öhlins suspension, expect to see those distinctive yellow springs becoming a more common sight.

Don't forget, though, that this is pure speculation – nothing has been officially announced, which means there's still time for even more rumors to fly.

bridgermurray (Dec 19, 2016 at 18:19)
If Ohlins was to sponsor someone that would be rare. I'm pretty sure that in the moto-sports world they actually have a policy where they don't sponsor anyone.

Killrockstar (Dec 19, 2016 at 18:36)
They won't pay him to ride Ohlins, but they will provide him with the products, I'm guessing that Specialized and Ohlins would have some deal that compensates for the lost earnings from SRAM.

j12j (Dec 19, 2016 at 20:51)
Policies like that have to change when you are trying to break into a new market. With moto racing they can get away with it because the are "the best" with MTB if they want to keep that same pedigree they need to get a spot in peoples minds

SintraFreeride (Dec 20, 2016 at 0:28)
@j12j: They have stated in a dirtmountainbike mag that their policies would not change for MTB. I think Bruni's team has paid to have Ohlins suspension.

fantaman (Dec 20, 2016 at 8:27)
@torero: no they are not,ohlins only support them with suspension to get feedback from the pro riders.

But it's a bit strange because his bike and riding gear do not have Ohlins stickers on it (like the motor industry users) and you would imagine they would if he was sponsored.

So I am confused.

freestyIAM (Dec 20, 2016 at 8:36)
@Killrockstar: I thought that Ohlin's didn't sponsor anyone, each rider has to buy the Ohlin's stuff if they want to ride it (which supposedly give more clout to the brand because riders only ride it if they think it will help them win and not because they get $$$s for riding it)

CorollaRWD (Dec 20, 2016 at 10:09)
@Killrockstar: Adam and Nico aren't sponsored but they have both helped develop the product/tunes from early on, they picked up the hats/clothes from the stand at Crankworx.

Ohlins don't do pay riders/drivers for using product, that is ingrained from day 1, as long at Rossi, Leob, Marquez pay to race it then everyone else has to, obviously they will also test some product like the Hope riders in MTB but they don't get to keep it.

TenBeers (Dec 20, 2016 at 10:50)
@Killrockstar: Ohlins uses Specialized retail outlets to sell their products. Maybe this exclusivity is the compensation. :shrug:

digthehills (Dec 20, 2016 at 11:36)
@j12j: If they release something that is truly ahead of its competitors then they can stick to the same model as moto-x. If it is the best then people will want to use it regardless of if / who they sponsor with their product.

jack-aldred (Dec 20, 2016 at 12:58)
@whattheheel: Thanks! But that's not an Emerald. Either a prototype Ohlins fork, or a blacked out 40 with potentially ohlins internals.

TenBeers (Dec 20, 2016 at 15:03)
@eljefe75: I am sure that is true, but read the last sentence under the description here: www.ohlinsusa.com/suspension-products/Mountain%2BBike/All/Front%2BFork/68/RXF%2B34%2BFork

SintraFreeride (Dec 20, 2016 at 23:23)
@whattheheel: The lowers are clearly that of a Boxxer. The crown is different which may suggest a bigger front wheel. I was actually think about this the other day. You could take a the lowers of a 29er lyric/yari and put it on the uppers of a boxxer and make yourself a 29er DH fork. Of course, the tire would touch the crown so you'd need so the seriously dropped upper crown and not the standard flat boxxer crown.
My guess is ohlins cartridge with boxxer 29er front fork with ohlins shock. I think he is still testing to see if it is worth using this setup in the worldcup.

kleinblake (Dec 19, 2016 at 18:21)
I wouldn't doubt that he's just testing it for specialized and using it to fuck with people. Who knows

MendelMu (Dec 20, 2016 at 3:34)
Imagine if it would of been Gwin or an Atherton. Daaayymmnn the hate would of been real! LMAAOOOOO

Could be fairly straightforward to run a 29er front wheel, unless it's wet and sloppy, then toss on a 2.8 Butcher out front on a 650 wheel.

Could be keeping with the theme, be something to be tossed onto an E29-Mk2 in 180mm travel with 29er wheels.

Could be the ticket to run a 29er Butcher and 27.5" Slaughter in Cairns.

tehllama (Dec 21, 2016 at 13:59)
@EnduroManiac: You're quite right - my bad on that. Moto-block spike would be the choice, for sure.
Dry and loose, there might be a case for wider rubber though.

Ploutre (Dec 19, 2016 at 23:37)
It's kind of already been confirmed by another picture, where you could see a black stanchionned dual crown fork, that isn't a boxxer. I would say they reused the RXF36 lowers, as they are stiff enough, their damper and just made some crowns and longer stanchions ?

Definitely Ohlins and a new fork

Intensevp (Dec 19, 2016 at 20:55)
Are you sure they haven't just taken the time to put the lower leg sliders on. Old news revamped.
ridemonkey.bikemag.com/threads/cane-creek-usd-fork.210624

Mtbkid21 (Dec 19, 2016 at 22:27)
As far is forks go, I'd assume that he'd use one of their kits for the internals of a 40. If I'm not mistaken there was someone on the circuit using their internals in a boxxer, could he end up using one of those in the chassis he prefers

nicolai12 (Dec 19, 2016 at 22:58)
@gonecoastal: Doubt it - Spesh has a lot invested in Ohlins and rely heavily - my guess is that it's a big part of the their contractual agreement...and shared R&D. Seems smart actually...if the fork/shocks are competitive and can be sold beyond OEM. I've heard mixed reviews...coils are awesome, rear shock on the new enduro has a tendency to blow up and the forks are sick.

gonecoastal (Dec 19, 2016 at 23:25)
@nicolai12: unsure what you're doubting? That Brayton was running that setup last season? Öhlins damper kit for a 40? Öhlins fork in the making (34 and 36 aren't priced much higher than Fox offerings)? Something else entirely?

nicolai12 (Dec 20, 2016 at 14:28)
@gonecoastal: haha take a deep breadth and we'll be okay. I meant to reply to mtbkid. I doubt Loic will be run 40 internals....if you know otherwise let us know. Spesh has a significant investment and reliance on Ohlins and their successes are heavily dependent on each other. That is all.

Down at the bottom. Loic clearly at least testing an Ohlins fork and an Ohlins rear shock. And also in Fox gear.

AntN (Dec 19, 2016 at 18:06)
I would have thought a USD DH fork would have been the first thing Ohlins would have produced for MTBs... Looks sweet, hope they go into production...

jack-aldred (Dec 20, 2016 at 8:12)
Considering everyone pretty much rides fox or boxxers it's fairly interesting news.

beeboo (Dec 19, 2016 at 19:26)
I want to see that fork in action!!! My guess is that he's just helping Specialized test Ohlins on their bikes before Specialized stops putting the Fox 40 on their Demo. I hope we see a full Ohlins spec'd Demo in 2018

sellcrackcocainetofundhobby (Dec 19, 2016 at 23:38)
i have never been turned on by lumps of metal before like i have with that fork #scorching

Autografika (Dec 19, 2016 at 18:33)
with Specialized and Ohlins already in bed together, Loic will join the party

feeblesmith (Dec 19, 2016 at 23:35)
Most likely weight, FOX never released their USD for weight reasons, DVO USD:s are also rather chunky. The RFX 34 was delayed for a full year because of weight issues.
Premium suspension always has to carry it´s own weight but in cycling it´s more true than anywhere because offset in performance weight wise can´t be compensated for like in motorsports. Or can it?

weebleswobbles (Dec 19, 2016 at 20:45)
Oh shit I did not know. That's cool they kept the quality always had good durability and reliability with MRP as well

szusz (Dec 20, 2016 at 5:40)
There was an interview with automotive engineer somewhere In MTB media some time ago and the same question was asked. The answer was not so quick or even not at all. The reason is that the Electrorheological fluids are highly corrosive to Aluminium and require use of special steels...

weebleswobbles (Dec 19, 2016 at 20:03)
White brothers still on my downhill sled although after last few runs it needs to be serviced now

LittleDominic (Dec 19, 2016 at 20:22)
White Brothers is MRP now. Same company, just put all their products under the same name now.

DylanDaSilva (Dec 19, 2016 at 19:09)
Maybe but I heard a rumor that he is leaving Specialized. He is helping them test ohlins before he gets a new title sponsor for next year... Canyon