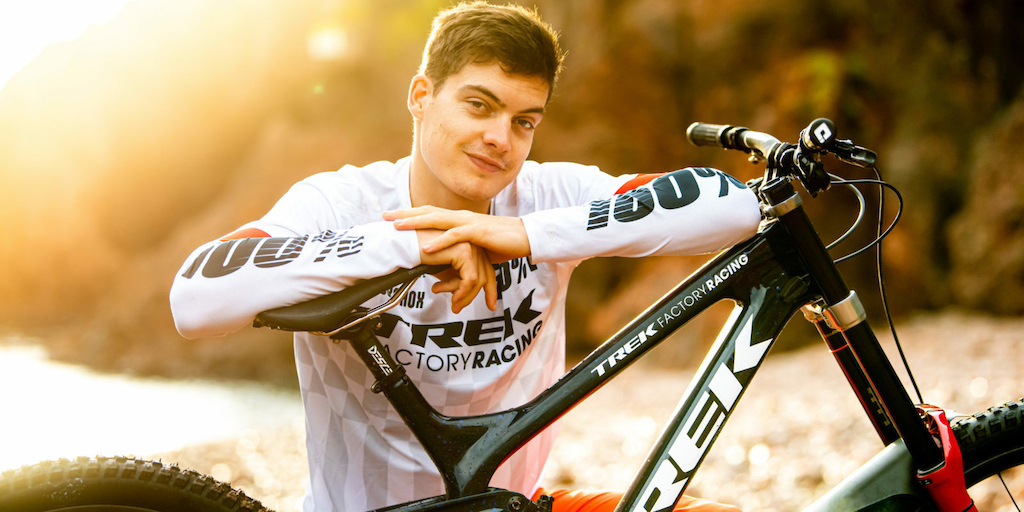 One of the biggest names in World Cup DH, Loris Vergier, announced he was parting ways with the Syndicate mid-December. Now, Trek Factory Racing has announced he'll be on the team for 2021. 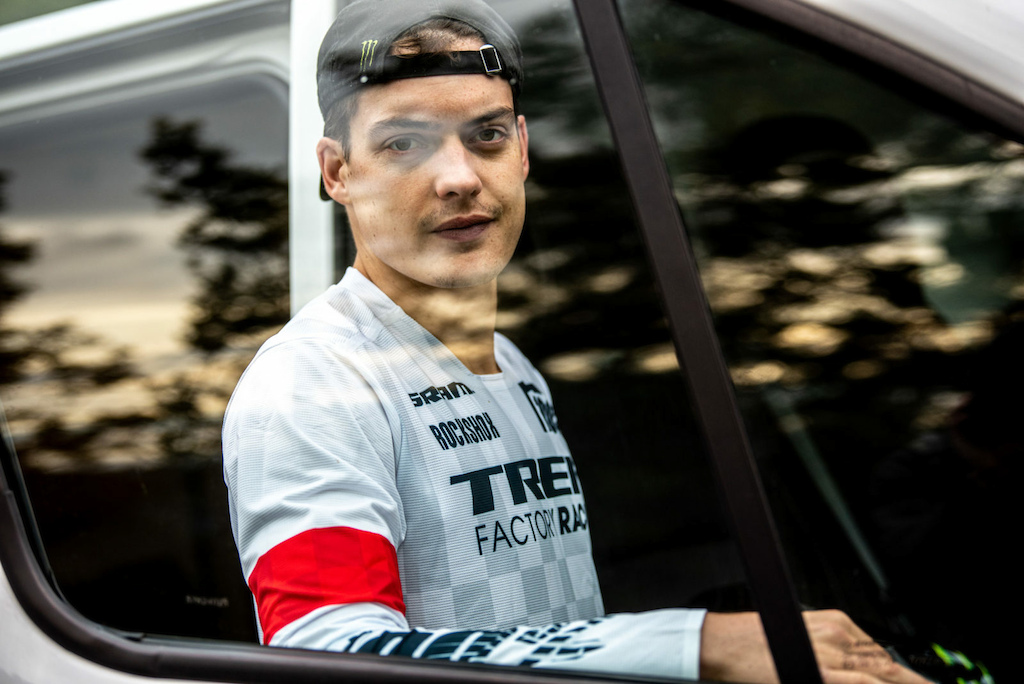 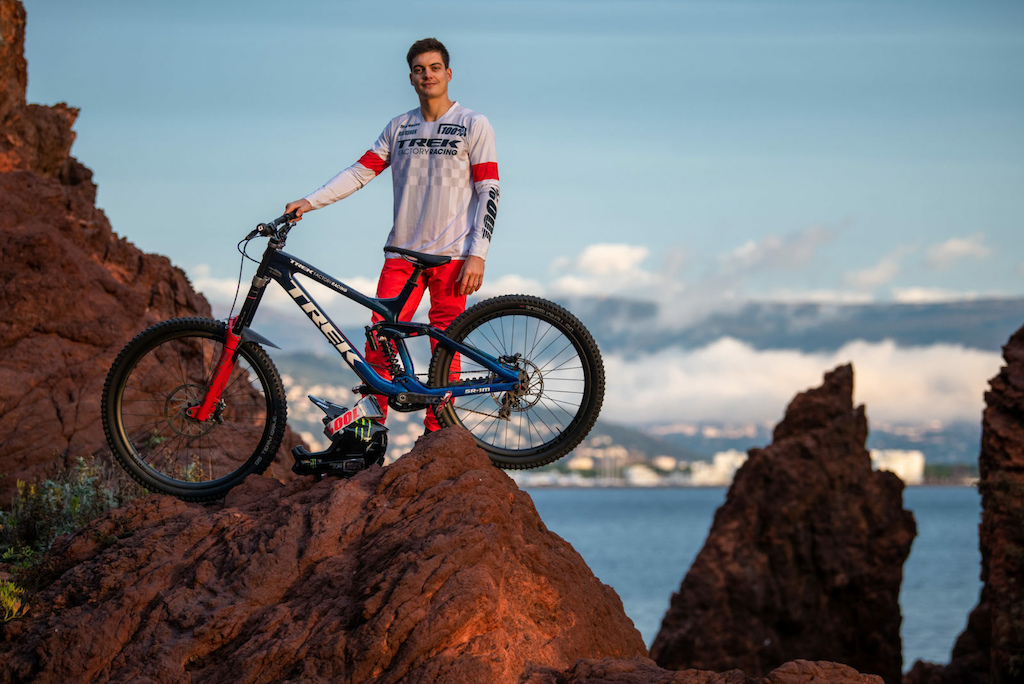 Vergier's teammates on Trek Factory Racing for 2021 will be World Champion Reece Wilson, Charlie Harrison and Kade Edwards. At an average age of just over 23, it's safe to say that Trek’s downhill riders still haven’t hit their ceiling. 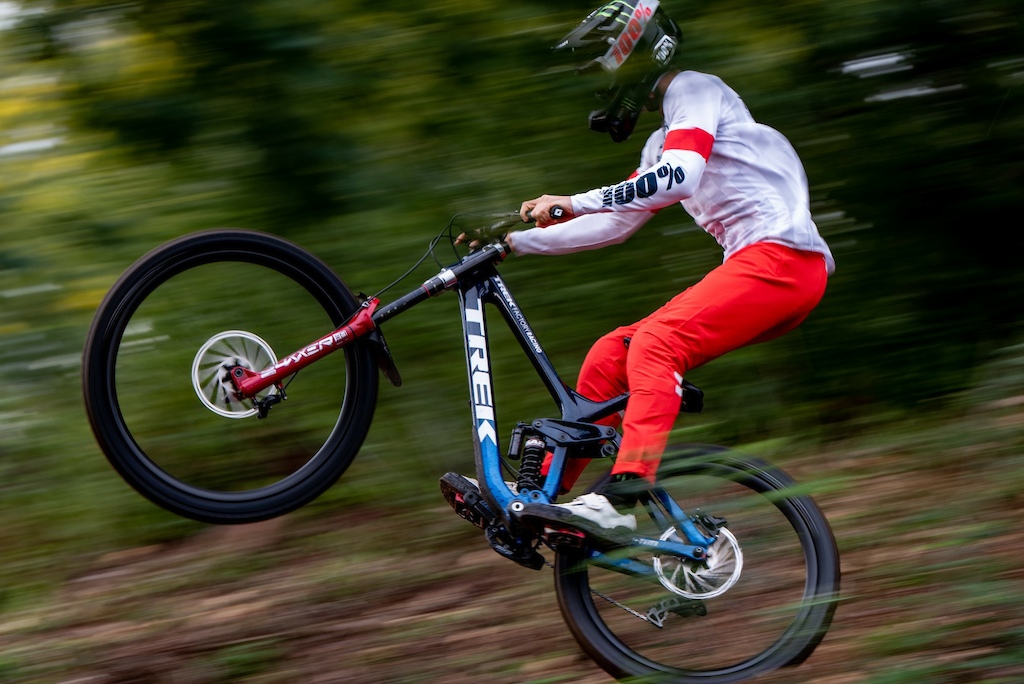 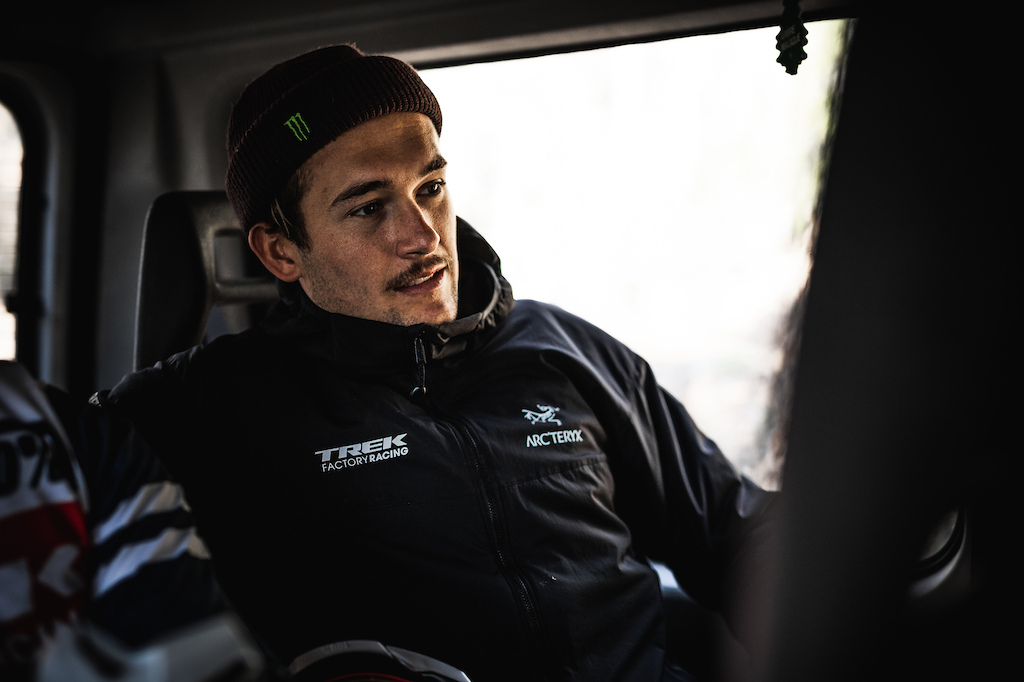 Harrison is particularly looking forward to 2021, after having to battle back from a wrist/hand injury before returning to competition and securing a podium at Crankworx in October. 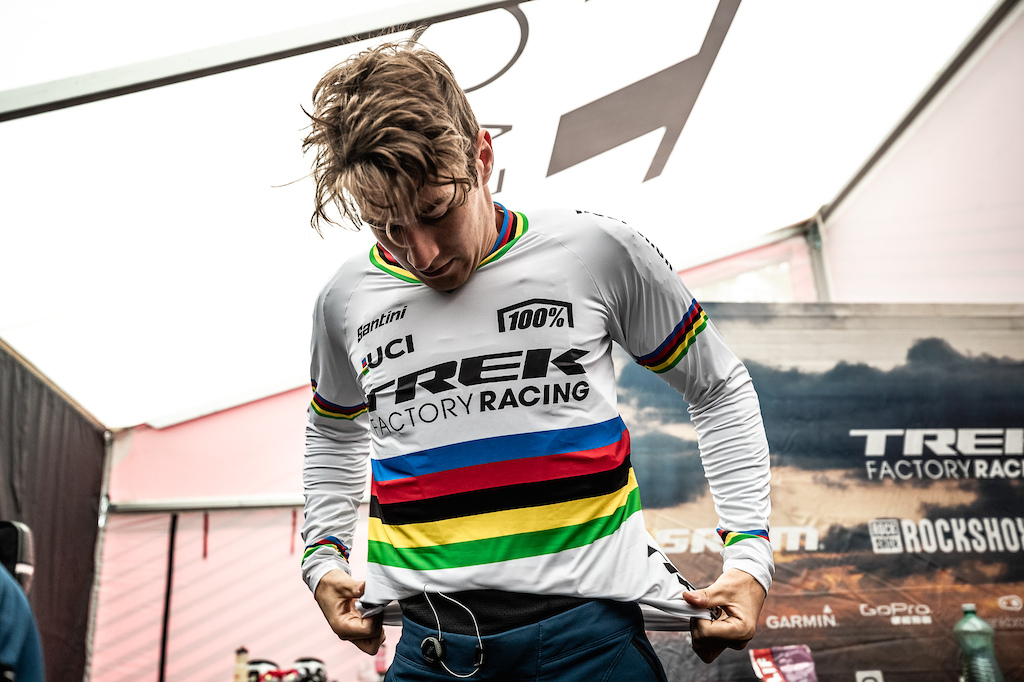 Reece Wilson announced that he’d be re-signing with Trek in November, while unveiling his all-class World Champion-styled Session.


Ethan Shandro, who was unable to race 2020, will step back from the team in 2021 as he recovers from concussion symptoms. Trek will continue to support Ethan as he works towards a return to full-time racing.

adrock-whistler (Jan 1, 2021 at 7:52)
The Trek team is looking really stacked now. That being said, I'm definitely going to miss the Loris vs. Jordi banter at the Fox truck.

Balgaroth (Jan 1, 2021 at 8:18)
Ye having Loris leaving the Syndicate is a big bummer, with Jordi they were pretty much the only content I had fun watching and now he will be on a boring team. I hope he gets his results and goals tho.

mi-bike (Jan 1, 2021 at 8:27)
@Balgaroth: dissapointing to see your fun levels weren't considered when these decisions were made. You deserved more.

likeittacky (Jan 1, 2021 at 8:56)
@mi-bike: You People are so sensitive when a comment isn't all about group hugs. @Balgaroth is simply saying that Syndicate had more entertaining content and Loris was at the forefront of the entertainment, especially mixed with Jordi; bringing fans more to enjoy, unlike Trek and their video content.

VZLNMTB (Jan 1, 2021 at 9:51)
@likeittacky: does Trek even have video content?? I mean team content a la SCS because we all know that Kade's content is basically all they actually need

johnnyboy11000 (Jan 1, 2021 at 11:07)
@Balgaroth: the only MTB content you enjoy is somebody making funny noises while another guy looks on disapprovingly?

Balgaroth (Jan 1, 2021 at 22:47)
@johnnyboy11000: Yes because it was funny and original. Race reports are roughly all the same so it gets old quickly especially since most teams don't really have this sort of alchemy. Watching the race is repetitive and I'd rather ride than watch someone else ride. I enjoy Semenuk's edit and used to enjoy Lunn's content, Metalier is up there too, all are rather original.
@mi-bike I know !!! How dare they ?!?

madocreg2 (Jan 1, 2021 at 7:47)
Congratulations Lori’s,
Sad to hear about Ethan Shandro’s struggle with concussion symptoms. Must be incredibly frustrating for him. Glad he is taking recovery seriously and that Trek is supporting that decision.

onlyDH (Jan 1, 2021 at 7:58)
Really tough. If he’s still having significant neurological issues at this point, I don’t think that racing will be in his future.

Kurtsee (Jan 1, 2021 at 11:54)
Get that cash while you can, loris can employ jordi as a translater in sram tent.
Sram: how did the first couple test runs go loris?
Loris: bratt ta tata ca ca caca brrrrrring bumpp bump bump.....
Jordi: he needs two clicks to slow up the rebound

Lets not forget, whatever you think about Trek, they're a big brand with big resources.

Also, lets face it, these pros could ride the shit out of any of the big brand bikes out there. So it really is a questions of who's gonna pay the most. Its (potentially) a short career so why not make the most out of it.

But it is a damn shame he won't be in the Syndicate anymore. Their team dynamic seems really cool (from the outside anyway) and also will miss his puzzling with Jordi and the Fox team.

Grosey (Jan 1, 2021 at 8:05)
Isn't kade pretty fast too? Sometimes you get that right mix of skills and personalities riding together everybody steps up. Feeling like this will be one of those situations.

sewer-rat (Jan 1, 2021 at 8:23)
@Grosey: he’s insanely quick, but with even more style, Loris is sick with style too so I just hope they session and grow together

fuzzydunlop (Jan 1, 2021 at 8:27)
@Grosey: Kades fast but his future is more on freeride imo, he's more a brendog than a commited WC racer

markcorrigan (Jan 2, 2021 at 13:02)
@sino428: In fairness, I'd say Kade is far more likely to podium at Rampage in the next 5 years than at a WC. The frenchies are just on another level and will be for sometime.

Intense4life (Jan 2, 2021 at 2:26)
Holy shit Andrew the stable is stacked! Awesome. Glad to see two OG’z still runnin the circus. Well Gabe ain’t runnin anywhere lol. People you should know that Andrew is monster of Canadian mountain biking. World Cup winner and one of the original Sombrio Cartel along with Dave W. and Gabe Fox from Canyon. Seeing these two guys succeed on the other side of the bars makes me very happy.

Balgaroth (Jan 1, 2021 at 8:21)
@linton-photo: no harm trying sure but the numbers are not speaking in his favor aside from one anomalie in the data.

50percentsure (Jan 1, 2021 at 10:13)
Insane that Loris is such an absolute dominant force on the WC that he can literally walk onto any team and be considered their top rider, World Champ's team or otherwise.

housem8d (Jan 1, 2021 at 10:25)
it's all about the vibe and how they help each other, not about who's the best. I think its gunna be good! Trek has the best and most interesting team and they really balance things well! Shandro is doing a good job!

Speeder01 (Jan 1, 2021 at 12:20)
The team is stacked with talent and speed. Loris has been the most consistent and most winning so far, but they're all young, hungry, and ready to charge. If Charlie, Reece, and Kade can hone their racecraft a bit, as Loris did in the last 2 years, they can all be right in the mix on a more regular basis. This is going to be a great team!

jclnv (Jan 1, 2021 at 18:45)
@UpNorthMTB: Home advantage? Obviously he’s an amazing rider, aren’t they all? But Loris is probably the most consistently fast guy out there. I don’t even think Bruni is at his level.

Jacquers (Jan 2, 2021 at 3:01)
Can someone explain the 'lead rider in the team' thing? Does that person get more attention, better parts or something? When you're on track it's just you and the clock. Or is it about the money?

UpNorthMTB (Jan 2, 2021 at 3:17)
@jclnv: I don’t honestly believe it exists in DH. Generally crowds at events are as supportive to every rider regardless of their nationality. Home advantage would also suggest that the Brits would win or all place very well at Ft Bill every year, which as we’ve seen is rarely the case (Danny Hart for example, seems to never quite click for him there)

HLEKTRON (Jan 2, 2021 at 3:32)
@Jacquers: I think it's all the above, plus gives more exposure, probably the biggest team change of the year!

mitochris (Jan 1, 2021 at 9:51)
Oh Loris, you were the only one that could pull off those purple Fox trousers. So disappointed.

shr3d (Jan 1, 2021 at 9:17)
Have fun trying to explain that braap skidikidpatpat swoosh skr skr to that RockShox engineer!

asapyohanes (Jan 1, 2021 at 7:45)
I was really hoping the new hsp session rumor was true but still very excited for loris to show what he can do on Trek and almost all new components !

JamesE420 (Jan 1, 2021 at 9:41)
So he's going to have different tyres, different brakes, different suspension, different wheels and a new frame to contend with. Imagine all of the puzzling behind the scenes!

housem8d (Jan 1, 2021 at 10:39)
good thing, everything is easier to adjust and he can focus more on his mental state and stock rockshox stuff is deff not the same as factory, these guys sometimes run progressive boxxer coils not saying that fox isnt modded for racers but theirs less of a difference between consumer and pro setups than RS pretty sure vpp and abp function very similarly, the differences being frame dimensions and lev ratio, although i think the new v10's have lower overall leverage ratios than before

Reignrob (Jan 1, 2021 at 8:21)
Big change in components and bike. Hope he gets it figured out quick as he was on fire on the v10. Am also sure he will have alot of input on the upcoming session.

blowmyfuse (Jan 1, 2021 at 16:05)
But will Trek offer a DH mullet bike that isn't a bazillion dollars and only in that ugly red color?

Word has it a totally new patform is coming out though.

christiaan (Jan 1, 2021 at 12:56)
Wonder how long it will be until we see them on a new proto dh frame? Reece rides the 29 frame as a mullet, Loris is a mullet set up fan, in the pic his bike is a 29 with mullet set up too, frames are a few years old so time for something new, longer lower slacker. First Worldcup? Testing 2021 for release 22 model year so say august 2021 release to public?

RobertGrainier (Jan 1, 2021 at 17:24)
I'm a huge Vergier fan... He's gotta be in my top 3 favorite riders. I was surprised by this, but I can definitely see how this will create a very thriving team... Gonna be a fun season hopefully

slow-af-rider (Jan 3, 2021 at 6:53)
How much do you guys think his salary is? The whole MTB scene is very secretive about financial stuff. Just curious what a rider if Loris’ standing would be worth.

markyp1965 (Jan 1, 2021 at 9:55)
That’s a strong looking Trek team and if Kade can find the missing ingredients to bring his racing up to the level of his other skills on the bike, they’ll be a real threat all round.

JamesE420 (Jan 1, 2021 at 14:30)
I wonder if Rockshox were pulling strings behind the scenes, wanting more potential podium places now that Commencal aren't using them?

farmergilles (Jan 2, 2021 at 11:03)
Was really sad when reading Loris was leaving the Syndicate but I can wait to see him riding on his new bike. I expect some incredible fight with Bruni and other.

andydhteam (Jan 3, 2021 at 4:52)
I hope I'm wrong but I think it will be a while before loris is back up to speed on trek...too much puzzling,alot of big changes in bike, components etc

giantwhip (Jan 1, 2021 at 11:05)
He's going to have the same winning results Gwin had on Trek now Still think Balfa should have signed him...

JohnSoap (Jan 1, 2021 at 17:24)
Loris is back on SRAM/ROCKSHOX,however I still hope that TFR will be back on SHIMANO/FOX in someday

Sausqwatch (Jan 1, 2021 at 23:09)
Congrtas. Loris joins a pro level team where he is free from high school, grab ass, booz olympics and community T.V B.S interviews on dilaed. Love it.

russovwick (Jan 3, 2021 at 3:33)
Who ever the rockshox mechanic is must be dreading the new season haha

ice29 (Jan 1, 2021 at 8:57)
Mixed feelings... was a big fan of Loris and his personality while on Syndicate, but can’t bring myself to root for Trek... somehow I have a block that prevents me from liking this brand and would never ever ride a Trek bike even if I was given one for free... Of course they are of great quality, one of the best, but maybe it’s the logo, design, or simply their history with Lance Armstrong, that bring up negative emotions (to me, as more a road biker than MTB).
But anyway, good luck Loris!

Upduro (Jan 1, 2021 at 9:34)
Slashing those negative thoughts might be a remedy, they’re what fuel those emotions.

mybaben (Jan 1, 2021 at 9:45)
@ice29 LOL. That's how I feel about Spesh. Funny how some people have brands like that, where we just can't get into them at all. On PB they just announced the Spesh Stumpy for MTB of the year, and I was like, Swipe Right!