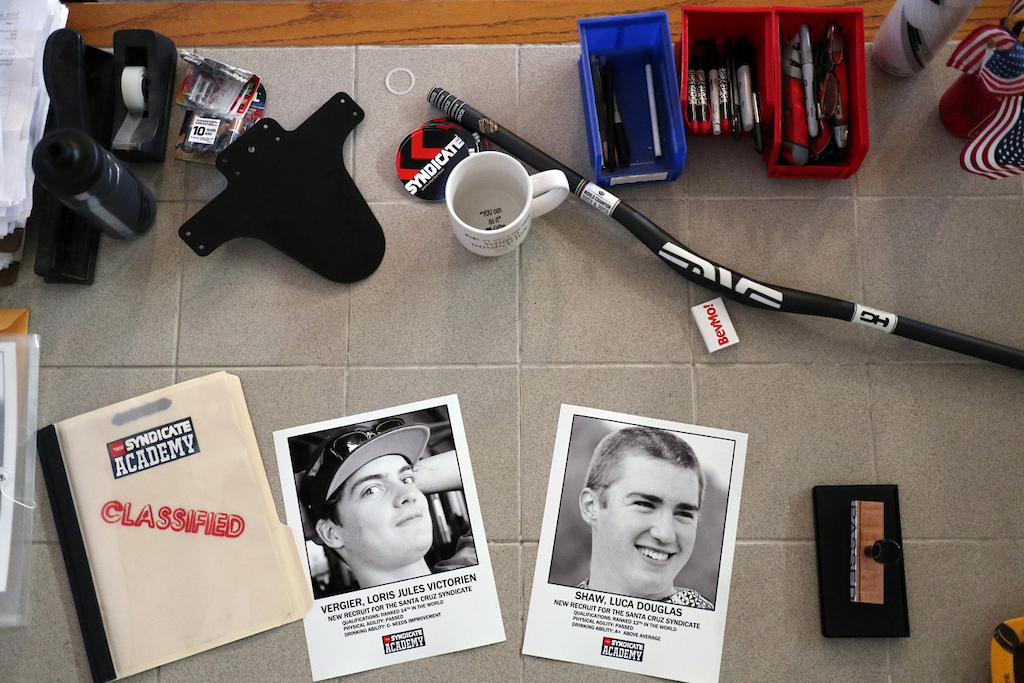 If you've been paying attention to the team rumors that have been swirling this off-season, the names of the two newest members of the Santa Cruz Syndicate aren't exactly a surprise, but now it's official: Luca Shaw and Loris Vergier will be joining Greg Minnaar on the World Cup DH circuit next season.

With 19 World Cup DH race wins under his belt, Minnaar will serve as the team's mentor, imparting his wealth of racing wisdom to the duo of 20-year-olds. What about Steve Peat? He may no longer be lining up to race World Cups, but according to Santa Cruz, Peaty will "remain on hand to share two decades of knowledge on areas such as race preparation, line-spotting and bike set-up." 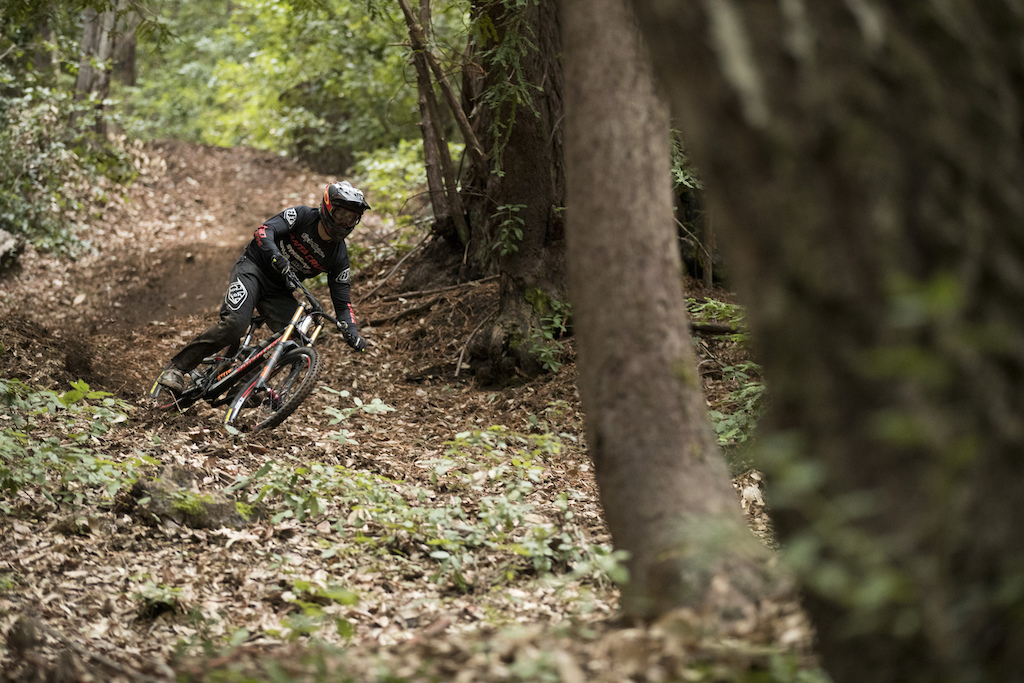 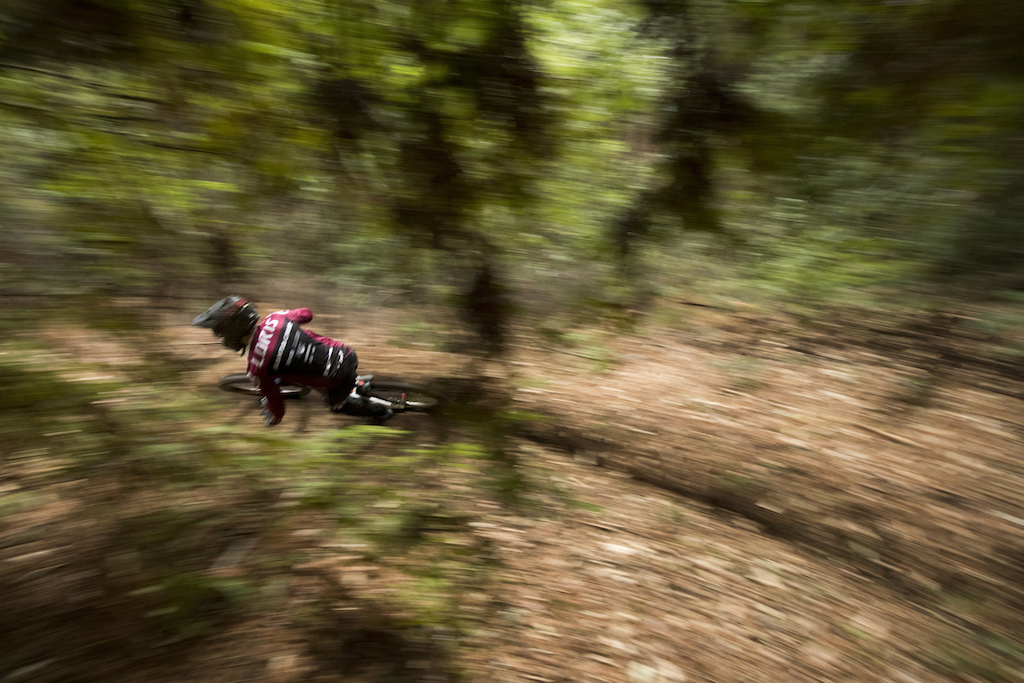 As for wrenching duties, "Doug Hatfield is now assigned to Luca’s pit corner, while Morzine local PA Roche joins the crew to handle all Loris’ race tech needs. Jason Marsh stays on as Greg’s chief bearing polisher, and team manager Kathy Sessler retains the hardest job at Santa Cruz; keeping this circus on the road, with her unique home-from-home vibe."

Josh Bryceland, aka Ratboy, mentioned his 2017 plans in a recent interview, but for those unable to decipher his thick accent, the gist of it is that he won't be on the Syndicate, but he'll still be riding for Santa Cruz, racing and riding at select events and locations around the world. 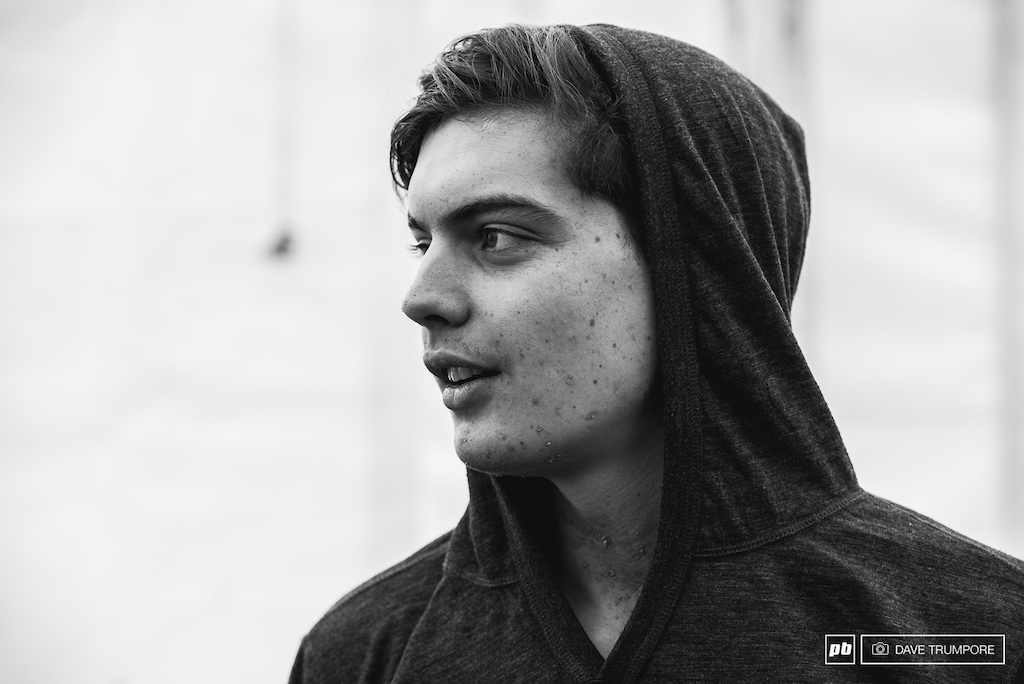 The big question everybody will want to know is, how do you feel about moving away from Loic? You two have known each other for a long time, but surely it has been hard at times for you because he's been so successful and is such a big personality?

Hard times? He's my best friend, my other brother and long time teammate; when he succeed at such a level, I was the first to be happy (worlds in Andorra or his first World Cup win)! He's an example for everyone, and he's respected for that. I'm where I am cause he shows us the way, and help me to grow as a professional rider. Leaving him as teammate is just spending less time together, in planes, travels etc, but we'll stay friends and that's essential for me! So I don't feel sad, I'm moving into another flat with other roommates, but I'll still laugh with those guys.

Do you feel there is pressure on you coming into the Syndicate? If you look at past riders, we're talking about Rennie, Peaty, Minnaar, Bryceland - they all have at least one world-level title each. Is that a lot to live up to?

The Syndicate is a legendary team, it's a dream to be part of that! (It was mine) At first you're excited and stoked, when you're realising, you're more stressed haha and when you meet, finally, your new team, you're happy and even more stoked. I try to avoid overthinking about titles and stuff, but I'm sure of one thing, we all want to go fast and be happy and they will help you to achieve that!

How have you found the change from the Demo to the V10? They're obviously both well-proven designs, but are very different bikes.

They both won, they're both fast, but I felt directly home on the V10, they've done maybe more than 10 years on it and it's just a beast! A lot different in the spirit, the Demo is made to go fast without doing mistakes, on the V10 you can afford doing dumb stuff and still manage to be fast, it's quite nice!

Is it a big change to switch from RockShox to Fox suspension? Have you had to change your approach to bike setup much because of it?

My approach still stays the same, the switch is finally not that hard, cause it's in a good direction. I love those little things on my bike, it's awesome, and the Fox crew is killing it; they love what they're doing and it shows up on how the suspension works for us.

Looking back at the 2016, how would you sum it up? Do you feel you achieved as much as you would have liked to, or are there some things you look back on and want to improve for next year?

My goal was to be more consistent, when I just look at the overall, I'm stoked, when I look in details I'm a little disappointed, I missed some good races with flats, or crashes. I need to improve that, and at the same time try to level up my speed, step by step.

In your head, what would a good 2017 season look like for you? Is there any particular element or goal you are looking to focus on?

A good season would look like: some podiums, still in the top 10 overall and a cool result at Worlds for once.

The complete 2017 UCI DH calendar is: 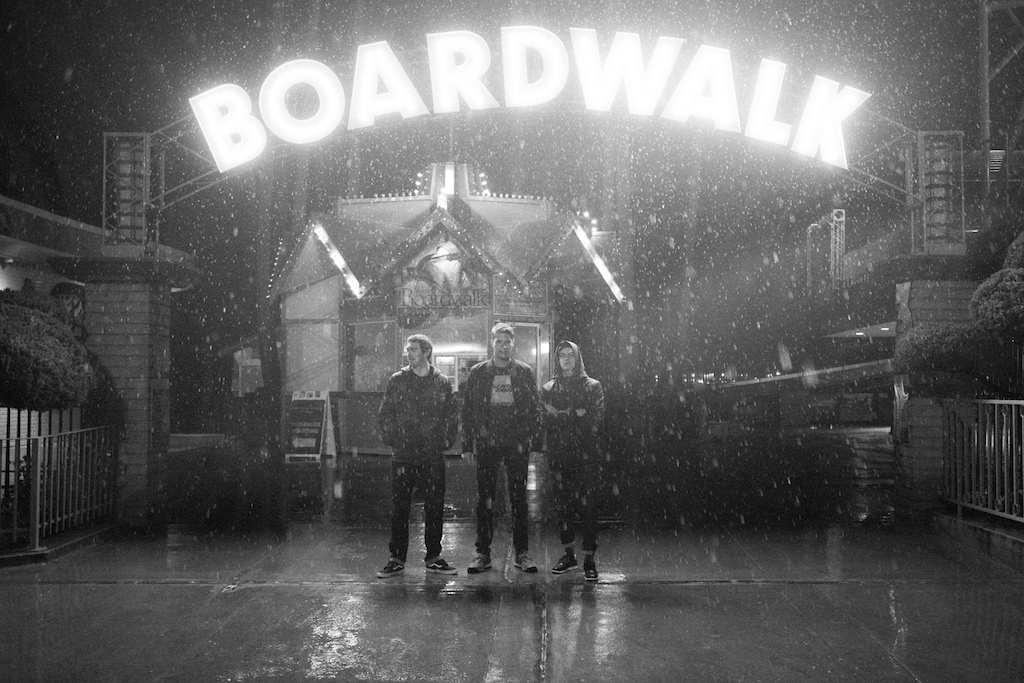 Follow all the team’s progress throughout the season at santacruzbicycles.com.

OriginalDonk (Jan 10, 2017 at 15:03)
@GH29orBust: Agreed. Loris: C- needs improvement, Luca A+ above average. Also have to appreciate the BevMo card in the top photo below the ENVE bar.

mooseman414 (Jan 10, 2017 at 15:41)
I laughed so hard at this video. Made my day for sure. I lost it when Steve had a flashback or Les Gets. The whole video is gold. Love it. And I also want a Syndicate hat! Share this everywhere.

eurojuice (Jan 10, 2017 at 20:44)
@hardcoredivision: The tea bag...I think...is part of a Scruff Gang ritual of initiating new members. New members get a hot tea bag shot at their face with one of those fly swatter guns. Ben Reid, Rat, and a bunch of other Brits are original members. Minnaar took one to the face, too. Look it up on Dirt. It's silly.

MTB-Colada (Jan 10, 2017 at 21:12)
@trek81615: Not sure why you say it is an American team. Santa Cruz is owned by a Dutch company and until this announcement the syndicate had only non-American riders.

OriginalDonk (Jan 11, 2017 at 8:06)
To the guys downvoting my comment highlighting Syndicate's own drinking assessments or Loris and Luca, take a moment to look at the Syndicate Academy cards in the top photo. I'm not saying Loris can't handle a few bevvies, I don't know the guy, Peaty is by giving him a C-.

jmc361 (Jan 11, 2017 at 8:29)
@plxmtb @MTB-Colada - I totally get both of your points. Santa Cruz (the bike company) was sold to Dutch holding company, Pon Holdings back in July of 2015. However, they're being run independently as they always have much like Pon's other cycling brands Focus, Cervelo etc.

Secondly, the Syndicate is indeed an American team. Always have been. When teams register with the UCI, they have a country affiliation and the SCS is registered as being based in the USA. The YT mob, while owned by an Australian (Martin Whiteley), put together by an American (Aaron Gwin), and sponsored by Germans (YT) is actually a Spanish team as that's where Whiteley's management company and residence is.

DGThree (Jan 10, 2017 at 10:54)
Rat Boy is such a good brand ambassador. Glad they're keeping him. Santa Cruz should do some sort of global 'Ride with the Rat' tour of bike parks and trails systems.

dancingwhale (Jan 10, 2017 at 12:43)
@DGThree: Noooooo. Part of what makes Rat and Loose so great is that they do whatever they want and Santa Cruz gives them the thumbs-up. Don't want to script it or anything

thenotoriousmic (Jan 10, 2017 at 13:41) (Below Threshold)
All mint riders but the personality has gone... it's just another team in an individual sport now.

The unique vibe about the 50to01 vids is that they are quite humble in actual riding content but still get you stoked as f*ck to go ride with a bunch of mates.

pigit77 (Jan 10, 2017 at 17:00)
Joining the syndicate I think is everyone's dream. Imagine having 3 or 4 bikes all rigged with the newest fox shoxs, Shimano and ENVE components. Having 3 of those bikes is already 30k in bikes. I think 2017 is the year of the syndicate. Good luck to you boys!

RideTahoe707 (Jan 11, 2017 at 22:07)
@thenotoriousmic: With Steve and Josh gone it seems you may be right. These kids aren't boring, but they certainly have some shoes to fill in when it comes to tom foolery. Stoked to see Ratty going to straight trail riding though!

jojotherider1977 (Jan 10, 2017 at 12:12)
My favorite thing about the Syndicate and Atherton racing is that its always been presented as a team to me. Its easy to respect them all equally. On other teams, it always seemed like there was a featured racer and then someone else.

slimboyjim (Jan 10, 2017 at 14:32)
@russthedog: Remy Metailler has done pretty well out of riding with style. As long as he keeps in the public eye sponsors will sponsor him. Granted it will be more difficult when you're not racing world cups but it can be done!

ad15 (Jan 11, 2017 at 0:07)
@russthedog: ummm totally plausible... just look at travis rice for example,,, he stopped doing contests and his "value" and marketability is higher than its ever been.. plenty of surfers quit competing and are doing just fine, if not better.. e.g. the malloys, rob machado, etc etc

kabanosipyvo (Jan 10, 2017 at 10:17)
A dream team, for sure. An awesome mentor in the GOAT for when the youngsters need it, young guns to push the GOAT harder, and many years of potential longevity for a team that values it more than any other. And all cool, approachable guys to boot.

And Guru Rat! What was in those tea bags eh?

jgreermalkin (Jan 10, 2017 at 10:39)
Not surprised to see The Rat move on at the same time as Peaty retires. He is quite the personality and a great talent but seems to be lacking the focus necessary to compete in today's UCI DH Series. Long live the Syndicate!!!

renno (Jan 10, 2017 at 10:36)
ahahhahaah this looks likes going to be an interesting session this year i new peaty would be doing something am going to miss the rat tho what a guy all the best to santa cruz

gbcarmona (Jan 10, 2017 at 10:51)
I miss Ratboy already...I was always looking forward to watch his run because he was always so rad and stylish!

blcpdx (Jan 10, 2017 at 22:28)
A friend saw them riding in Santa Cruz while they were filming this stuff. He said, "I think I know how to ride a bike - I'm not sure what they were doing, but it wasn't mountain biking." hahaha that last 20 seconds is so rad.

endlessblockades (Jan 10, 2017 at 11:20)
Hard not to love this and at the same time feel for those two poor bastards having to put up with those shorts and Peaty's breath

dirkieuys (Jan 11, 2017 at 0:32)
Syndicate embodies the best of DH. Cant wait for them to kick ass this year,
What will Ratboy be doing this year?

steezysam (Jan 11, 2017 at 5:33)
I've never seen someone who rides as closely to Greg's style as Luca. Perfect mentor. And Loris could go WC speed on my 2012 status with basic suspension and janky brakes

unleash (Jan 11, 2017 at 13:35)
made me smile quite a lot ,thought brycelands bit was brilliant,things should be interesting over the next few seasons

BobbyEnglish (Jan 12, 2017 at 12:49)
Peaty saying "you looking to surrender already" to a Frenchman is just plain wrong! But hilarious.

I like how they set it up with Luca saying "all I wanted was a day out on the bike"...referencing Danny's last video.

Slowjams (Jan 10, 2017 at 12:02)
Awesome! Great move for both of these young guns. Hope this adds a shot of life into the Syndicate with departure or Steve and Josh.