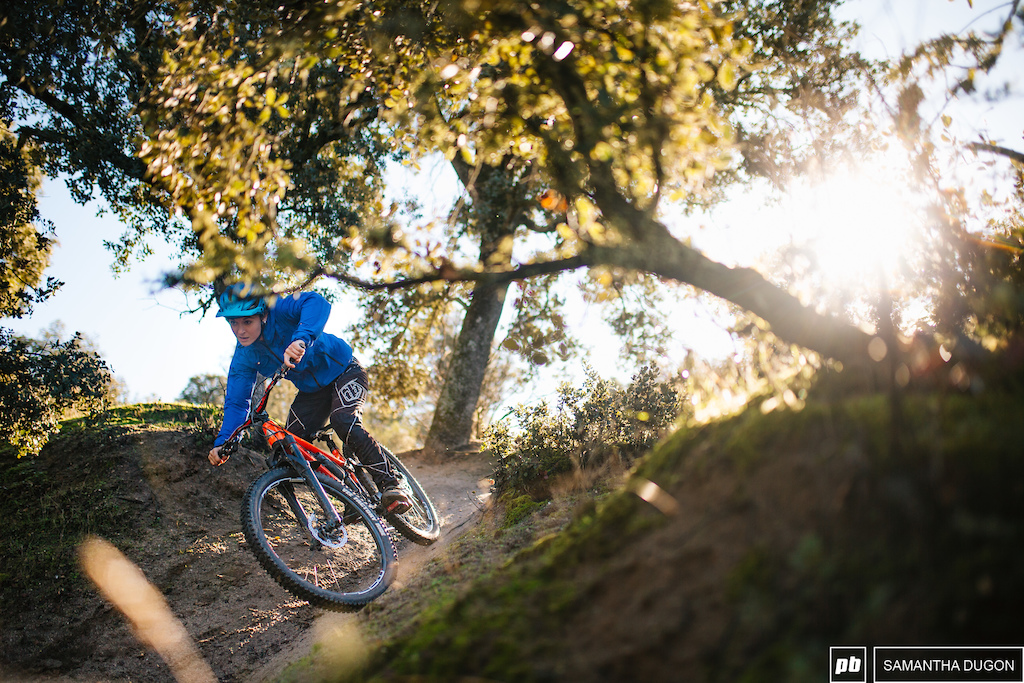 Blacktown Trails
With Veronique Sandler
Photography & words: // Saskia Dugon
Entering its 3rd full season, Blacktown trails has quickly amassed tonnes of good reviews and recommendations from brands, riders and media since its launching 2016. Guiding primarily out of the La Sierra valley, situated under an hour North West and into the mountains from the capital of Madrid, Spain.

With a visit in its planning stages, I gave shredder and stunt lover Veronique Sandler a call to see if she’d be keen for trying out some Spanish riding with me, luckily she was. With busy schedules, we only managed to book 4 days of riding in, but that gave us plenty of time to get an idea of what trails and variety of terrain the area and guides had to offer.

Our wonderful and friendly guide for the week Emilio picked us up from the airport where we packed our kit and ourselves into the van and headed to our accommodation. Blacktown Trails have paired up with Pena Pintada hotel in Nava Cerrada, a popular hiking destination with those trekking the Camino de Santiago route, as a result, the hotel was welcoming and well prepared for hosting cyclists with good food, packed lunches and bike storage. 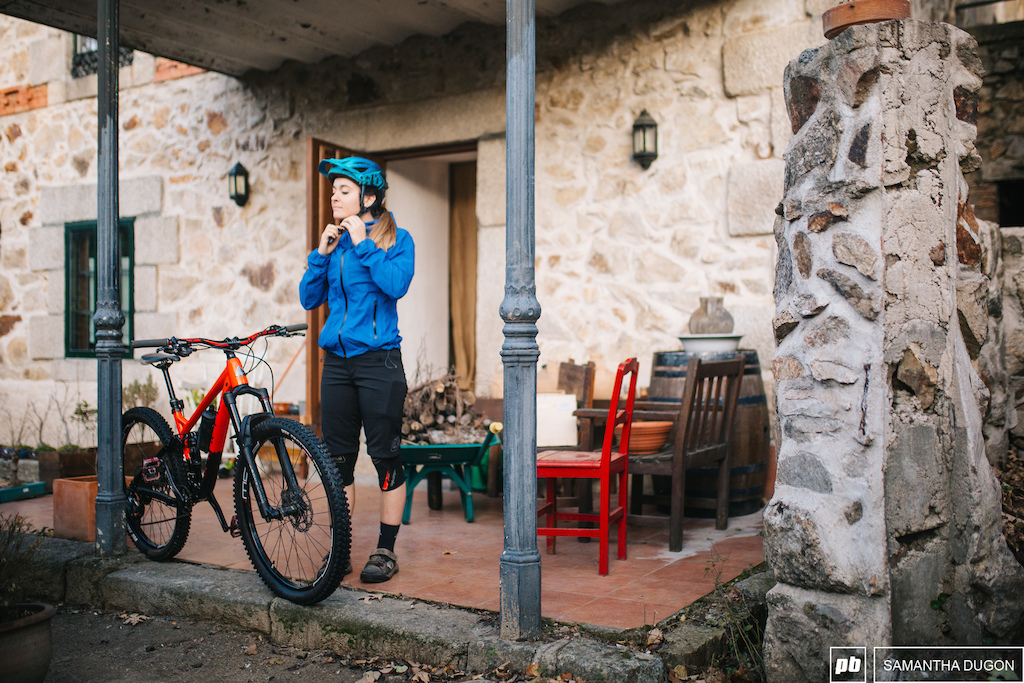 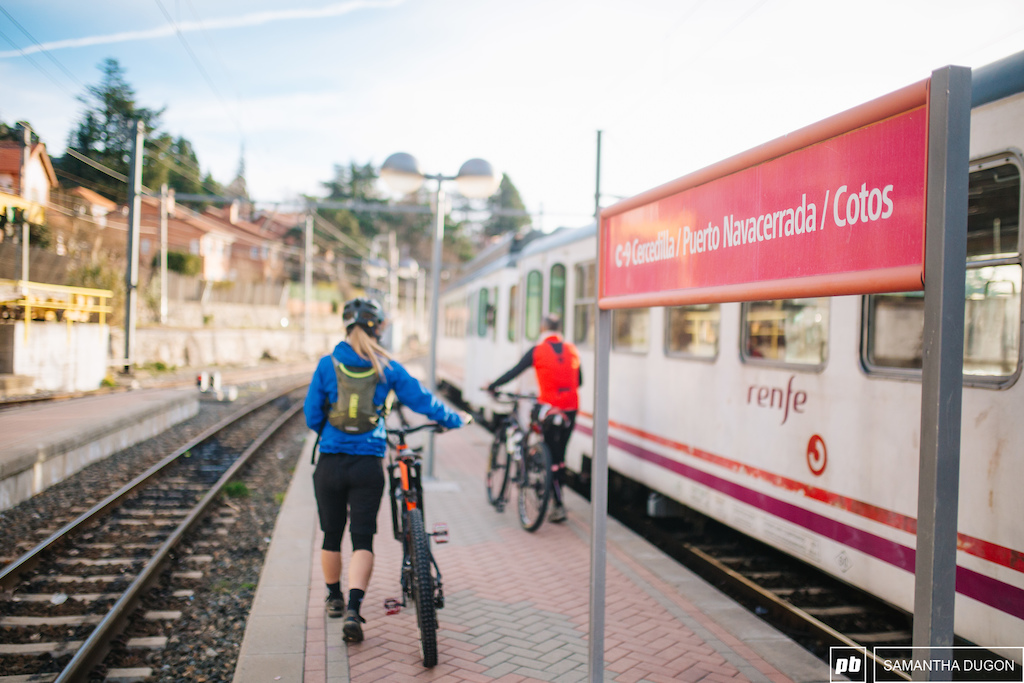 After the late evening arriving in Spain we took the chilled option for riding in the morning and took the old mountain train to the top of Navacerrada pass where we rode the Camino Schmidt trail which was a wide, hard-packed path with natural rock boulder sections. With the trees shedding their leaves and the sun shining we were treated to warming, mottled patches of sunlight as we weaved through woods. Halfway down the trail we came across one of the largest rock features we’d seen on the trail which soon became a stunt opportunity for Vero. After some time sessioning the boulder and smashing through rock gardens we continued down the trail where we’d reach the Fuenfria Pass to take the long and wooded Camino Viejo De Segovia descent back into town. 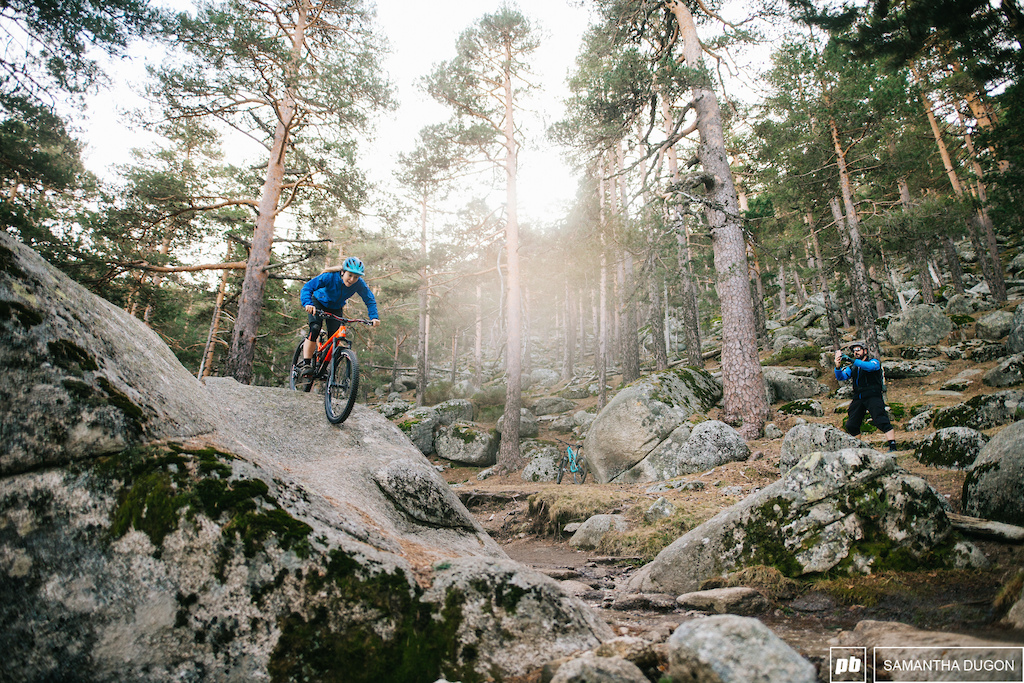 An almost vertical rock face to get on top of this rock slab gave the opportunity for some play time mid trail. 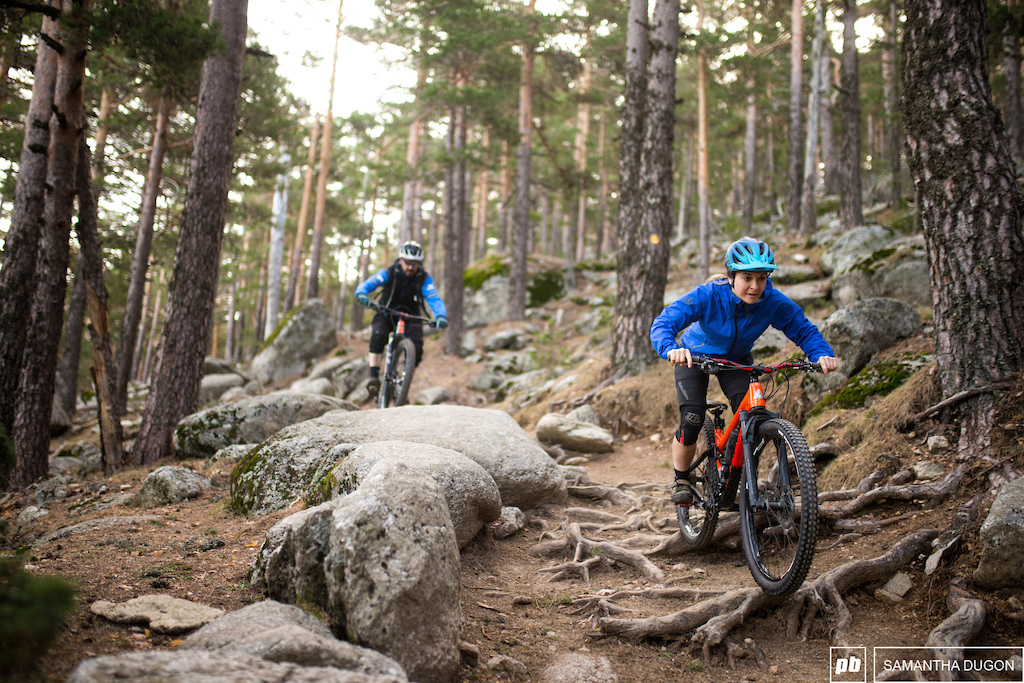 The Camino Schmidt trail had plenty to offer including fun and gnarly rock and root sections. 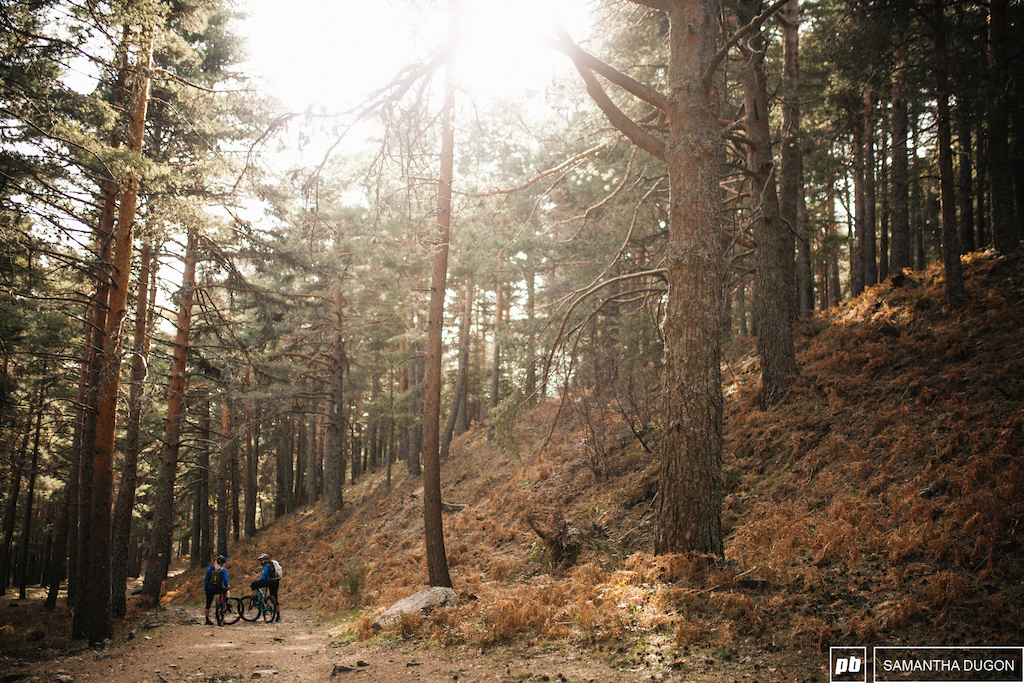 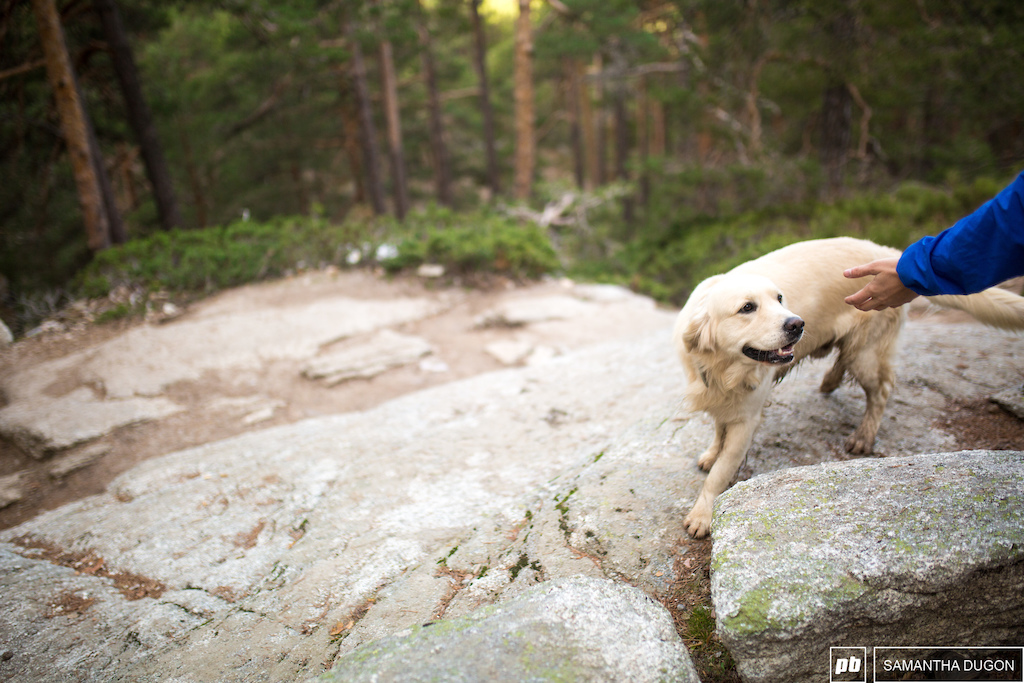 After a quick lunch break we jumped in the van and headed to another riding location; Hoyo de Manazanares. We pulled up next to a large 4x jump track, Veros eyes lit up looking what stunts could be pulled and where and before we knew it she was at the start gate sessioning the jumps and getting in some sideways air time. We then headed up the road where we found trails that weaved between large granite rock slabs providing endless opportunities for creative line choices; you could keep it tight and maximise the chance of scandi flicks on every turn, or take the high lines and send it off the rock slabs around you. It’s safe to say we did a good amount of both. 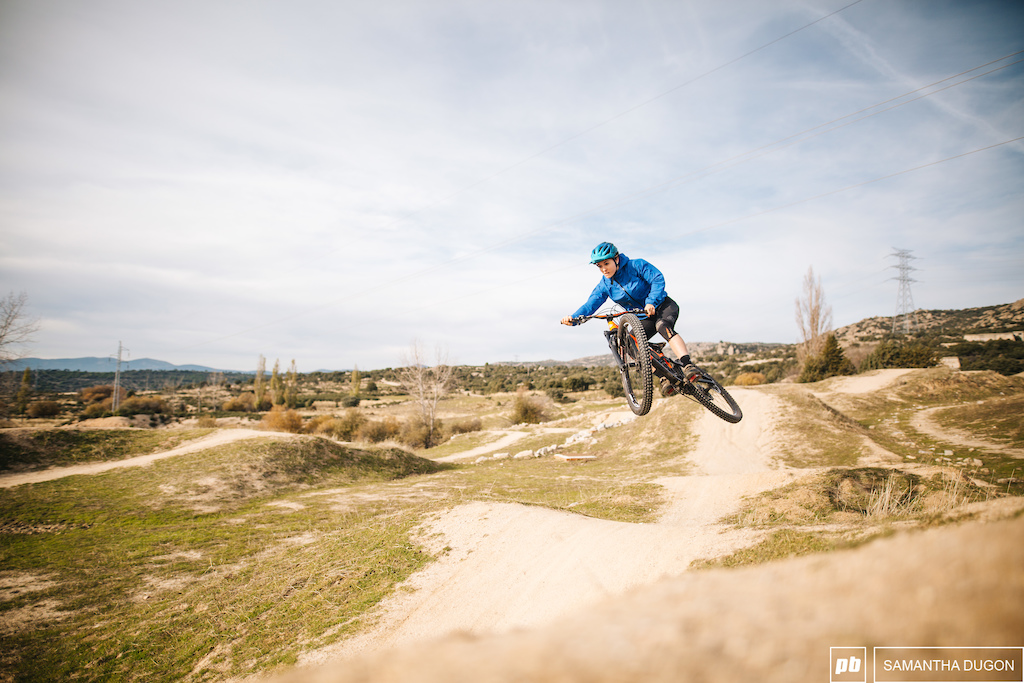 Veronique Sandler getting some sideways airtime on a 4x track before heading to the trails. 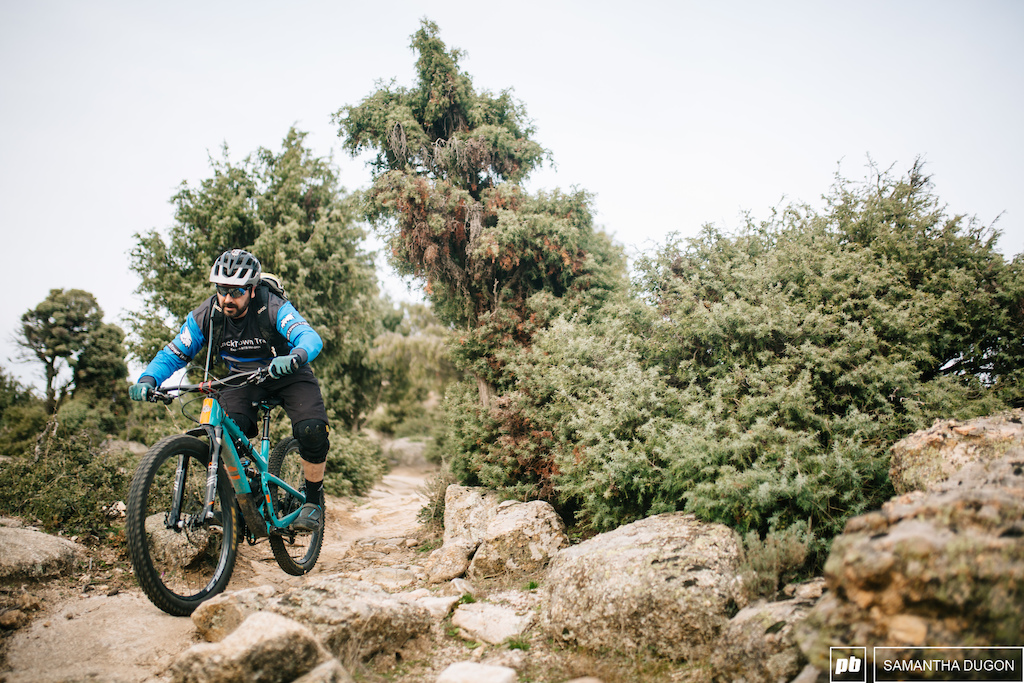 Emilio bombing over the rocks at Hoyo de Manazanares

The most educational day of riding would come on our 2nd day where we visited Patones, an ancient town situated deep in the hills of La Sierra. The area consists of numerous tiny villages throughout the mountain with Patones being one of the main towns. The houses are made from the natural black slate rock of the area making it known as the Black Town. There is an old tale that from the area that claims it was missed by Napoleons army as they swept through to Madrid because of how well lit blends with its natural surroundings.

“It is a magical spot where the riding is fantastic, and a special energy floats in the air” said Emilio, our MTB guide with a passion for all things historical.

As we were shuttling in the van our original guide Emilio became our driver as local guide and firefighter Sepu would lead us for the day. The sun shone through the van windows on the drive up, however, as we neared our drop off point we found ourselves in a sea of fog, which, despite our best hopes that it would lift, persisted. 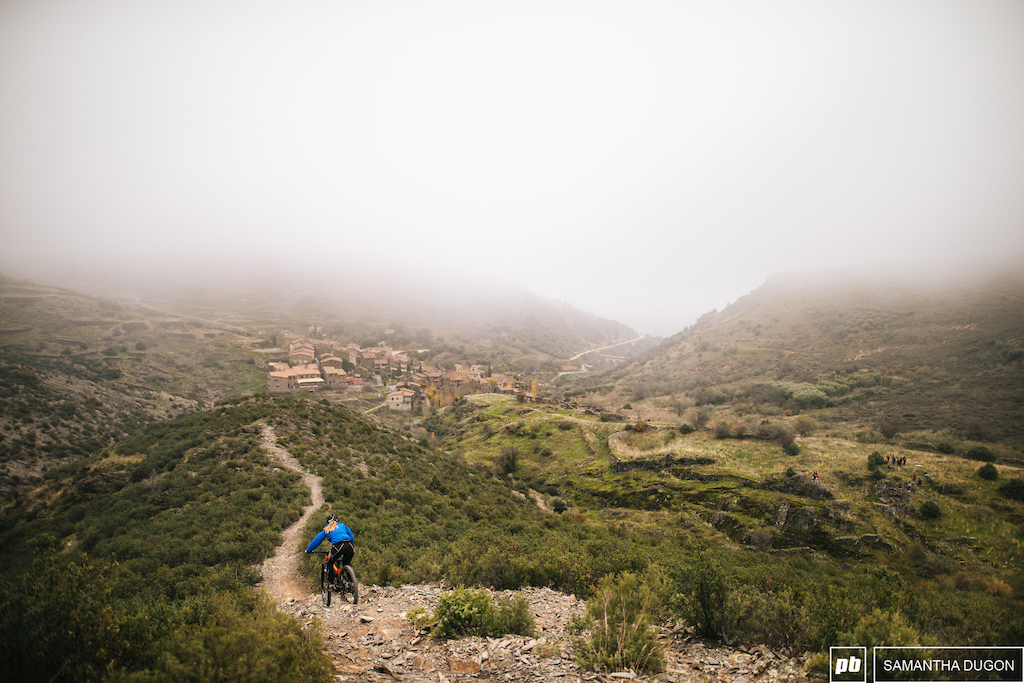 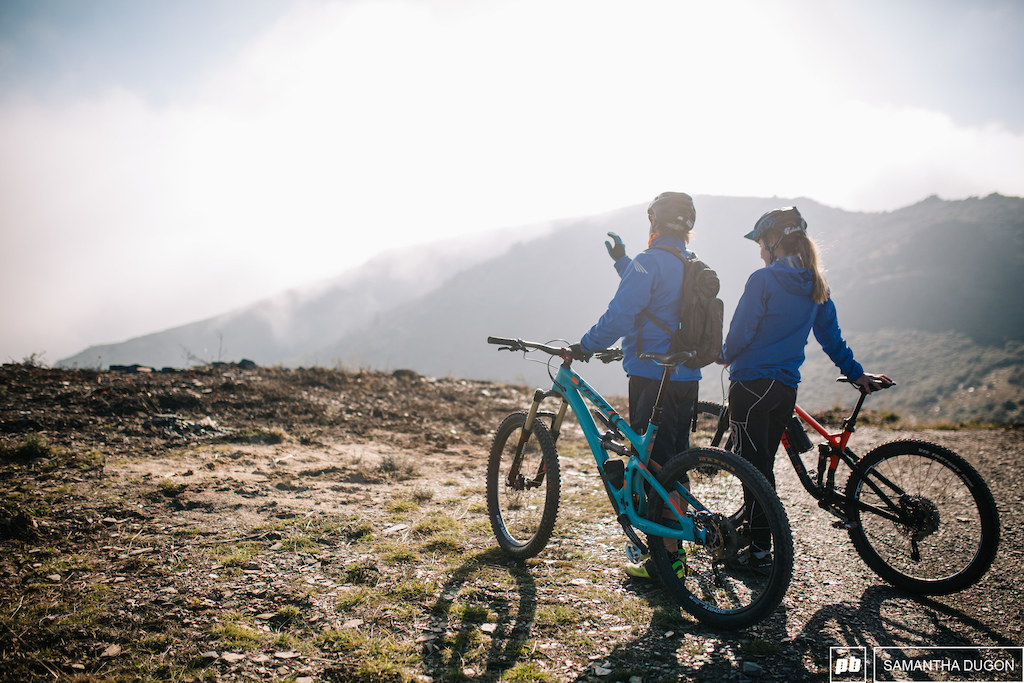 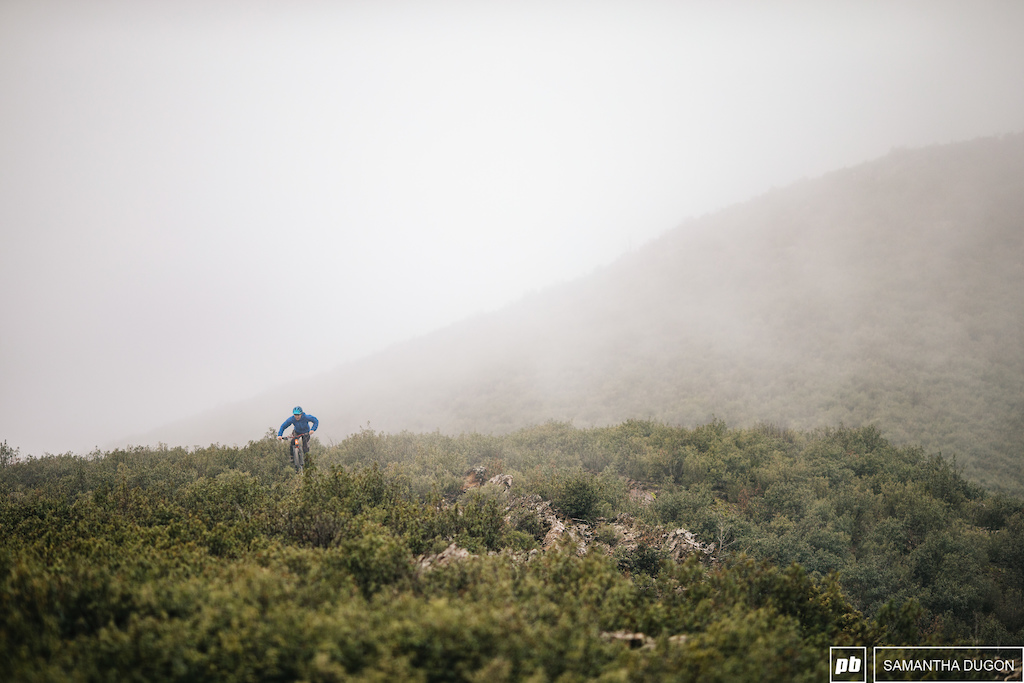 There were a few brief moments before the fog would descend on us for the day of riding. 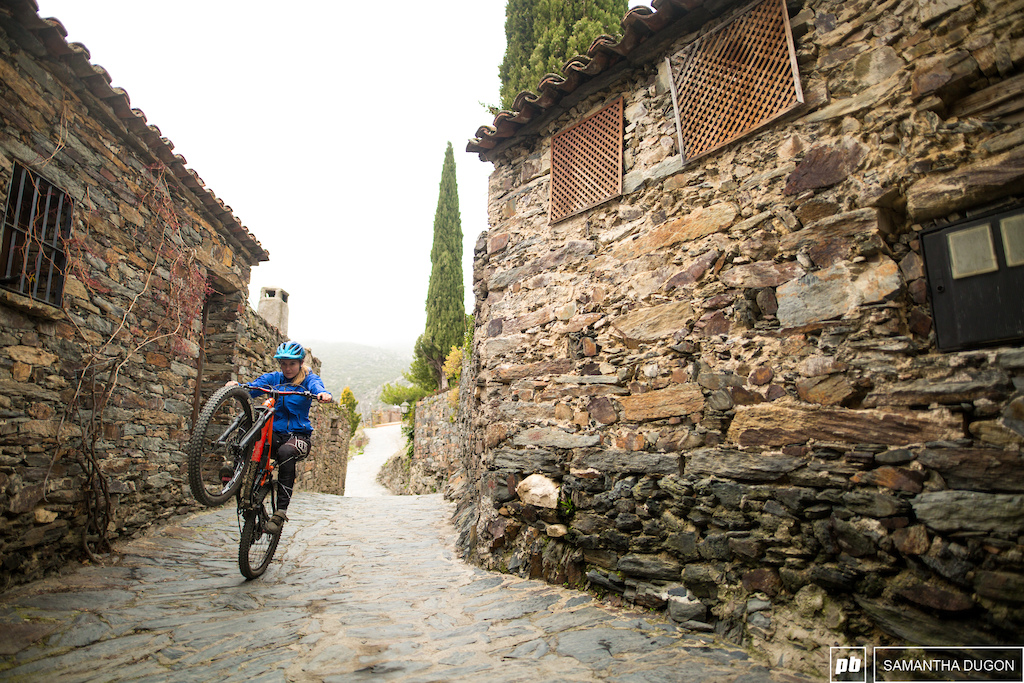 Back wheeling around the old town of Patones.
Despite the cold fog, the trails in Patones provided some of the best riding of the week, packed with natural singletrack, rock sections and fine sand-like dirt. The final few hundred metres into town was a long off camber loose rock section overlooking the black town, and it was easy to see that this was one of Veros favourite spots so far as we were both keen to keep pushing on each section for just “one more shot.”


We headed back to the van to warm up before heading to Valdemanco where we were treated to a dystopian style backdrop as a mountain peak rose about a foggy, rocky and arid landscape. 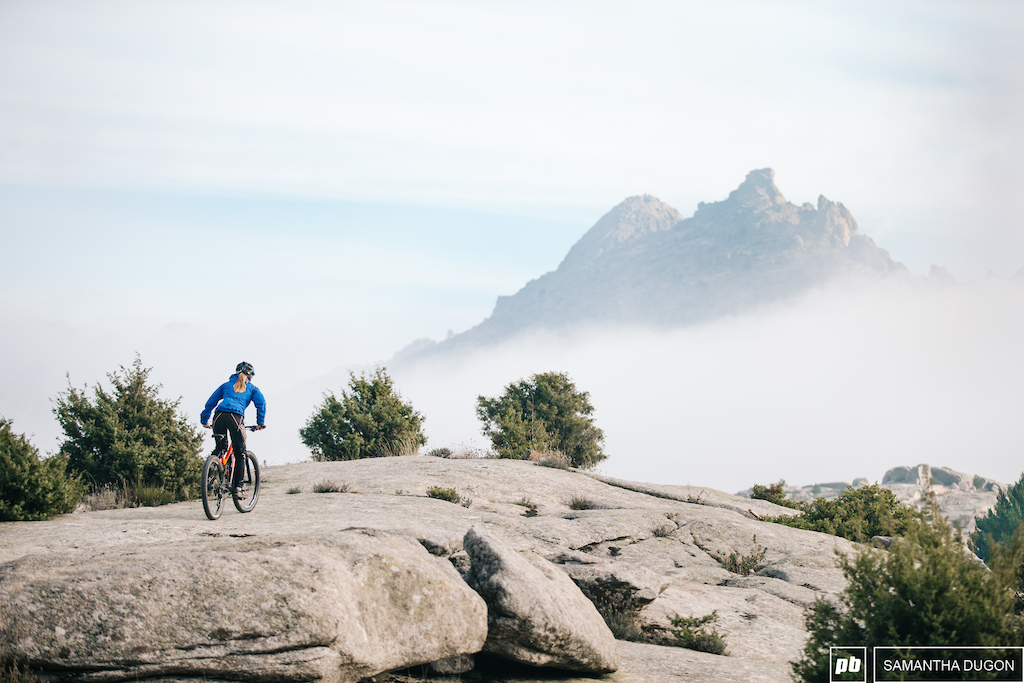 The dystopian backdrop at Valdemanco.

As the bad weather worsened we made a break away from the La Sierra valley and headed towards the capital where an abundance of all-weather trails were waiting for us on the outskirts.

We parked up in a gravel car park, no different to anything us mountain bikers are used to, however, as we set off to cross the road up the trails we took a glance to the left down a quiet and seemingly unused road only to see El Pardo; the Kings Palace. It was the equivalent of parking up by Buckingham Palace and going for a quick shred opposite her Majesty. After some gazing of the building from afar we headed up the trails where we were greeted with sandy terrain that was perfect for skidding when dry and that soaks up any moisture when it’s rainy. The trails at El Pardo were the perfect all year, all weather trails, not to mention incredibly fun with jumps, berms and gullies at every opportunity. 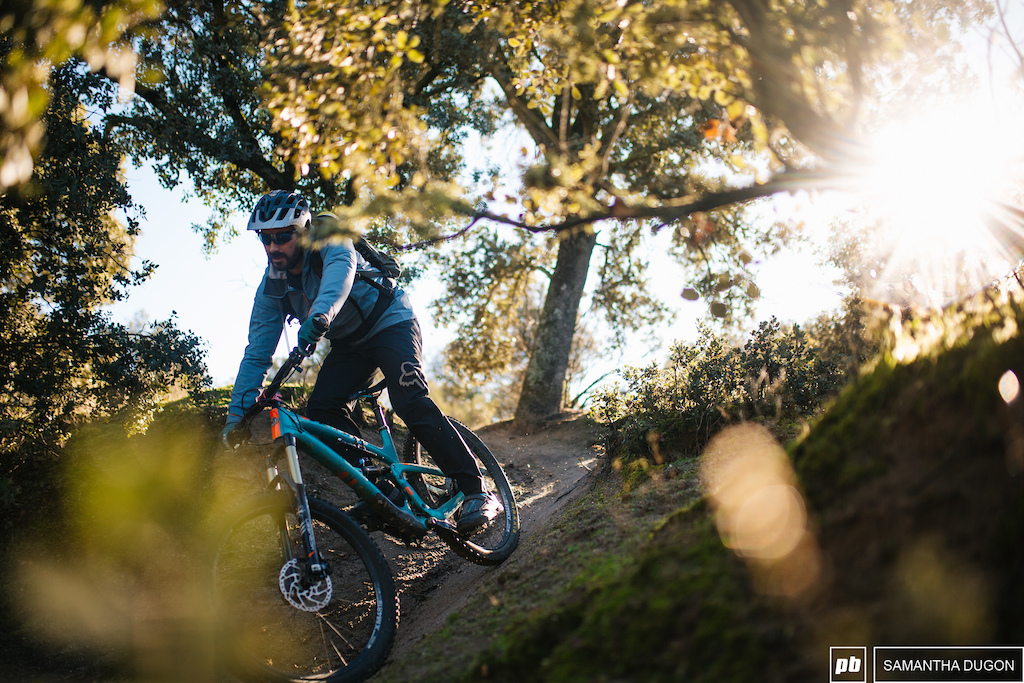 Emilio dropping in at El Pardo on the outskirts of Madrid. 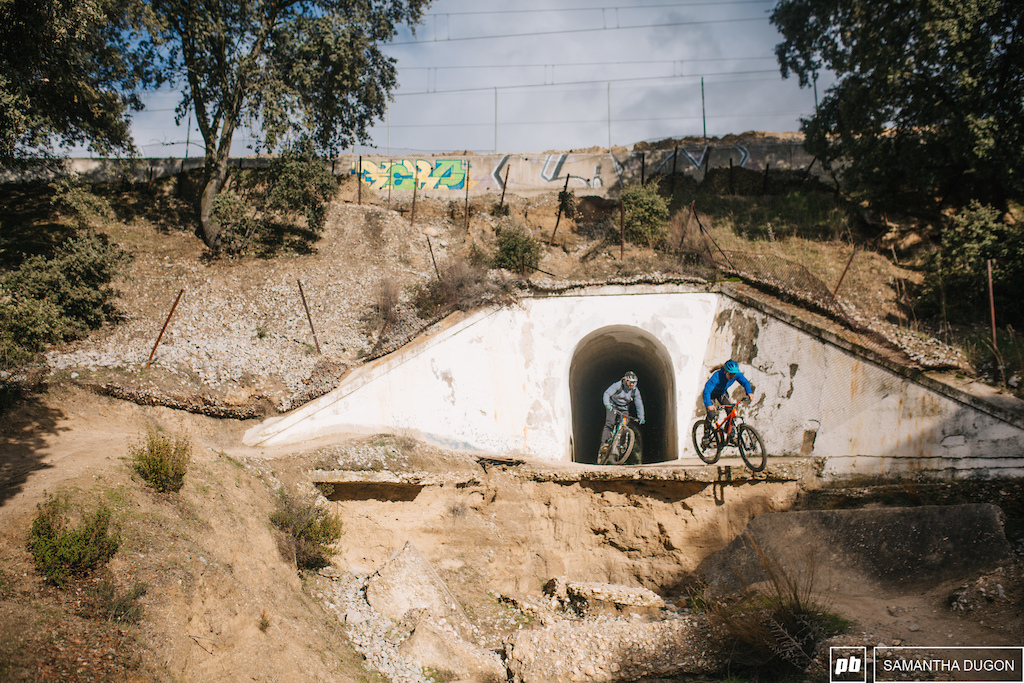 Underneath a train station was an old disused tunnel which made the perfect straight to gain speed before dropping into a series of gap jumps.
El Pardo mountain biking trails

With an afternoon flight we got some riding done before packing up the bikes and so we headed to a mountain overlooking the Monastery in El Escorial and rode in the area of Silla de Felipe II where it was known that King Philliphe 2nd used to sit on a rock to watch the building of the Monastery. 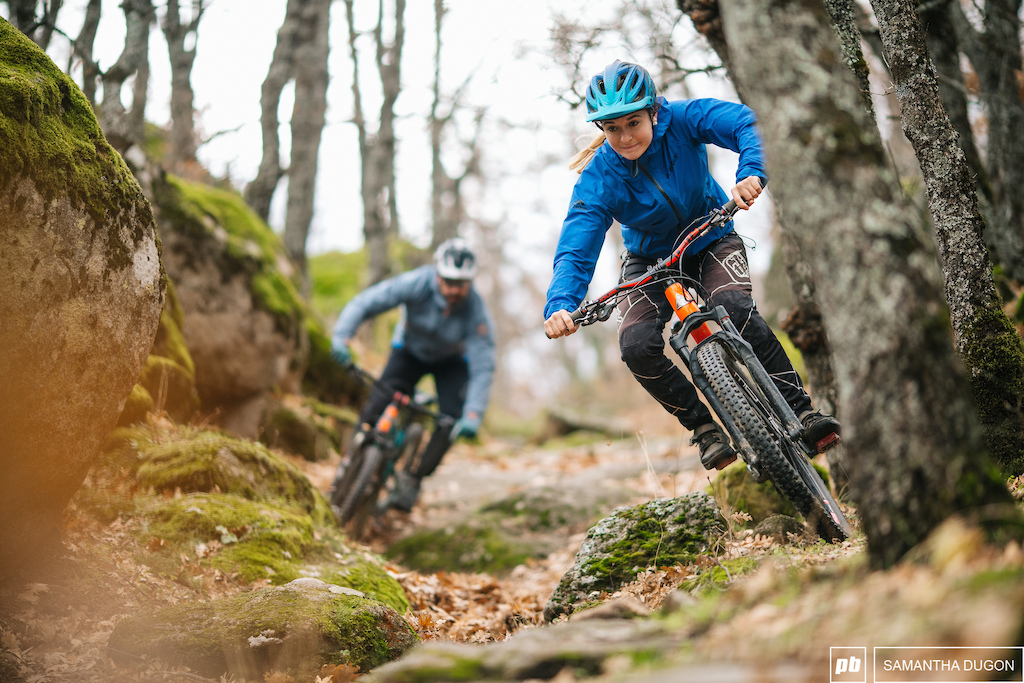 Getting in some quick, pre-flight riding. 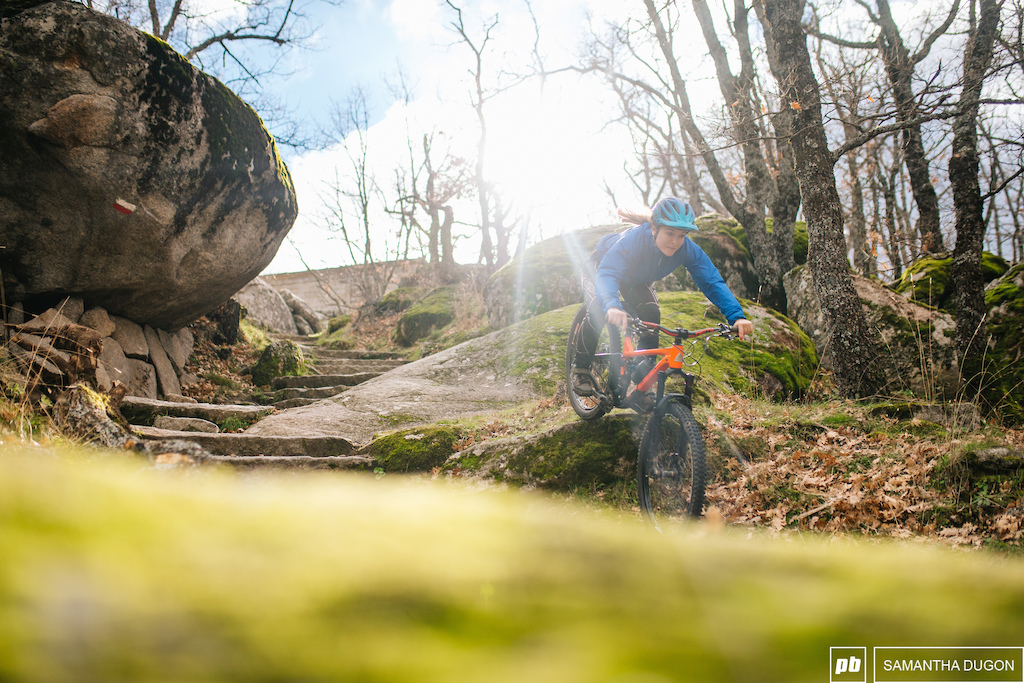 One of the things that really struck me about riding with Blacktown trails was how steeped in history their local area was, it seemed that wherever we went there was some historical fact or legend about the land that our knowledgeable guides would have plenty of stories at hand ready to tell us as we rode past, which made the riding more immersive.

Reflecting with Vero after our trip I asked her what she expected prior to the week:

BlackTownTrails (Mar 7, 2019 at 3:41)
Good times, glad to hear you enjoyed the visit to Madrid! Looking forward to having you again!

homerjm (Mar 7, 2019 at 4:09)
Good to see those nice pictures!Madrid is awesome for biking in general,so many options! Navacerrada-Fuenfria area is beautiful and very fun,full of loose and gnarly stuff,my favorite place to ride in Madrid.

jpculp (Mar 7, 2019 at 9:07)
My brother and I are heading to Spain in May for two weeks, flying into and out of Madrid. Any good recommendations for affordable mountain bike rentals and a place to ride that is accessible with public transportation?

homerjm (Mar 7, 2019 at 11:59)
El Pardo is in Madrid city,about 25-30 mins pedaling from Sol square,just very close to the downtown. Madrid is like a triangle and the top left segment is near to 100 km of in line mountains (Valdemanco,Navacerrada.El Escorial,Leones...),you can go visit some points by train (Cercanias) bus or just rent a car. It is about 1h to 1,5h driving from Madrid downtown,so it is no so far anyway. I work for an uplift service here in Madrid,not Blacktown trails. If you have any question feel free to ask.

mirsepassi (Mar 7, 2019 at 12:22)
Veronique is so rad! Love seeing these kind of stories involving a female shredder!!

ichabodchain (Mar 7, 2019 at 14:28)
I did not know that you can find suck great trails around Madrid, looks like similar terrain to what I've ridden in other parts of Spain. Spain has the best trails I've ridden so far in Europe, can't wait to get back :-)