Marin Renames its 27.5" Trail Bike to the Rift Zone 27.5 for Legal Reasons

The Rift Zone 27.5 is Marin's most popular mountain bikes

For zipping up mountains, soaring back down them, floating over jumps, or popping out of turns, it’s made for fun and made for everyone.

Hang on a minute.

You rub your chin. Move in towards the screen. Stare closely at the images. You think back to the days before the Rift Zone 27.5. Wasn’t there was another most popular bike that had you dreaming of Marin County, California singletrack and watching the sunset from a classic local peak like, say, Hawk Hill? 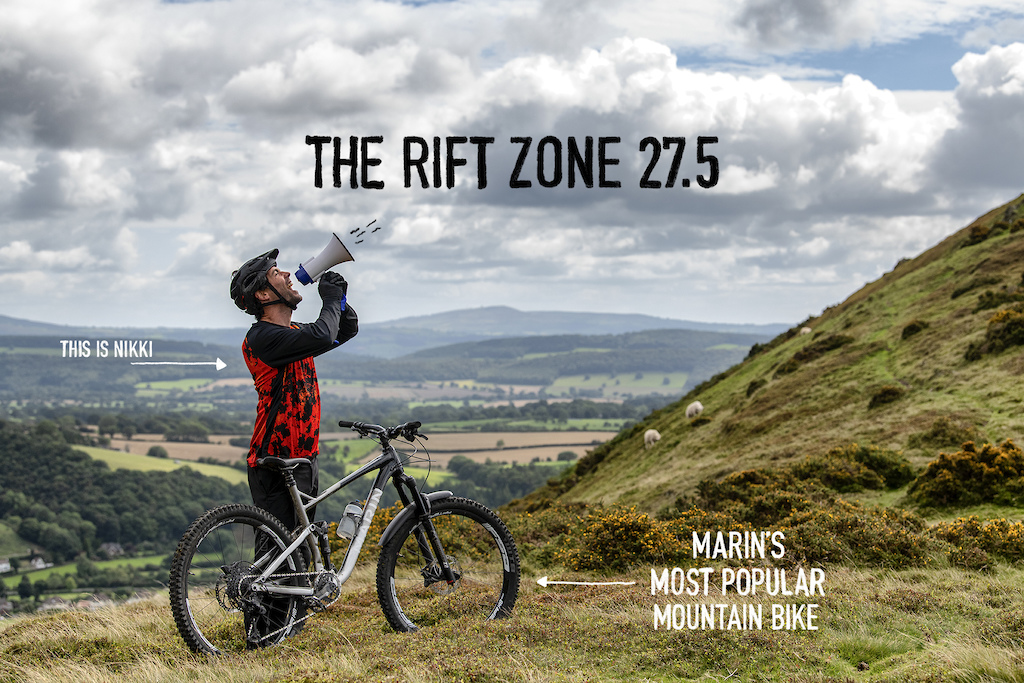 Affordable, robust, versatile and capable. You definitely knew the bike. In fact, maybe you even bought it, and now you've seen the video you are going to head out for a spin to confirm your theory — yep, it’s every bit as fast and fun.

You are right. You have seen the Rift Zone 27.5 before. In a previous life, it had a different, but now unmentionable name and the reason is really rather dull: someone somewhere set up a new bike company and threatened to launch a hawkish legal challenge against Marin if we kept the old name.

We didn’t lose too much sleep. Our most popular mountain bike has a new title, but everything else is just as appealing as ever.

Now, the Rift Zone family has been extended to include a full range of bikes that represent the great value, excellent spec, and beautiful finish that make Marin’s most popular bike so, well, popular.

It’s not just the Rift Zone 27.5 that has a new name: Our super fun full-suspension kids’ bike is now called the Rift Zone Jr. The wagon-wheeled range-topper is the Rift Zone 29 (previously Rift Zone — we are allowed to talk about that). Plus, we’ve added a new-for-2021 Rift Zone 26.

We sent team rider Nikki Whiles out on the road in the UK to help get the word about while remaining socially distanced — which meant he had to turn up the volume. We hope you enjoy the video.

AndrewAndjelic (Oct 14, 2020 at 8:38)
This Marin mess is the most Marin, CA thing I've heard in a while... Maybe some lawyer-happy angry hippie hiker who frequents Bolinas Ridge or Four Corners will see this and have a bone to pick. I'm really curious how this whole story went down.

JSTootell (Oct 14, 2020 at 8:56)
Reminds me of the SIlicon Valley guy who is suing an expedition company for failing to get him to the top of Everest.

Yeah, fkn d-bag. Maybe he needs to reread Into Thin Air or even watch that flick based on it. Risks at 9k meters that backfire tend to end up taking your life.

bman33 (Oct 14, 2020 at 12:40)
@JSTootell: Just read thru that article, thanks for sharing. Seeing how NONE of the groups at base summitted that fall season, the serac was the reason. Screw that entitled D-bag suing and threatening to cause greater risk taking at an already high risk area.

maxyedor (Oct 14, 2020 at 8:33)
Should have just called it the Llih Kwah. Oh, and who's the other company, curious if they have a real claim, or just being D-bags. Marin has been using the name for a while, hard to believe a start-up was using it prior to Marin, and if they're just trying to Capitalize on Marin never trademarking what's honestly a pretty generic name, they're dicks.

just6979 (Oct 14, 2020 at 8:58) (Below Threshold)
It's not a generic name, it's a very specific name. Marin has been around for a while, they should know better than to skip out on trademarking something, even a place name, used in this context. Even the name of the company itself is borrowed from a place, and I'm sure they have a trademark on that

showmethemountains (Oct 14, 2020 at 11:26)
@aerob: It could be related to rights in other countries that are an important market to Marin. Trademarks don't apply internationally. They need to apply for it in each country separately

showmethemountains (Oct 14, 2020 at 11:34)
@maxyedor: it is probably a dispute over just the word Hawk and not the full Hawk Hill name. For example, there appears to be a Hawk Bikes company in Germany

fuckingsteve (Oct 14, 2020 at 8:37)
What the f*ck how do you launch a new bike company and figure you have any kind of claim on a name that's in use already?

just6979 (Oct 14, 2020 at 8:55) (Below Threshold)
Perhaps the new (as yet completely unknown) company already registered some trademarks, and Marin has actually been in the wrong the whole time and they're just spinning it to make them seem the victim of some kind of corporate wrong-doing.

Brownsworthy (Oct 14, 2020 at 15:47)
Marin should make a street hucker style bike called the Tenderloin. A bike that doesn't mind getting down and dirty in the streets. It would have to come with mudguards though to stop the human faeces flinging into your face and up your back.

islandforlife (Oct 14, 2020 at 8:51)
Nice to see the 26" model for kids!! Just before Christmas last year I bought an extra small 27.5 Hawk Hill / Rift Zone 27.5 for my son that was on super-sale from a local shop. I put some 26" wheels on it, shorter cranks and an angleset. Sent some pics to Marin and looks like they thought it was a good idea!

They need to slacken that head angle though... and up the travel up front. Rocky Mountain Reaper 26" has a 64.5 HTA and 130mm up front... though this Marin is substantially cheaper which allows for some tweaks. I think that fork travel can be adjusted with spacers and you can always add an angleset. Then just buy some proper tires and you've got yourself a proper kids ripper bike. My son is loving his and getting wayyy too fast!!

just6979 (Oct 14, 2020 at 8:53)
Sounds like their lawyers messed something up. If it's truly a _new_ bike company coming after them, they should have a prior art claim to keep using the name. Unless the other company registered it first but hadn't gone public with products yet, and Marin has been in the wrong the whole time by using it...

Also, couldn't come up with another landmark or geologic feature to name it after? They seem to be pretty different bikes, not just a 29er and 27er version of the same thing.

tacosareawesome (Oct 14, 2020 at 18:25)
It's not that they messed up, they did a cost benefit analysis. Litigation is expensive and time consuming. And now they've taken the wind out of new bike company's sails.

teethandnails (Oct 14, 2020 at 9:25)
I like that Marin has simplified it's range of bikes.... its going to make it easier for shops to order and stock less sku's and have the ones in stock that matter. Easier to sell to the customer as the Rift Zone and the Hawk Hill looked very similar in the first place. Now there is simply one bike, 2 wheel sizes. Well done.

ebxtreme (Oct 14, 2020 at 9:27)
If I recall, Kona had to rename the Bear (I rode an '02 Bear) to the Dawg in '03 because Marin's owners were threatening a lawsuit. Apparently, Marin had a bike called the Bear Valley. I believe there are different owners of Marin than now, but....

Lastmissouriexit (Oct 15, 2020 at 9:04)
Kona was originally called Cascade Bikes, btw. Glad they changed, for whatever reason.

coombsd (Oct 14, 2020 at 9:58)
Have they phased out the QR skewer and gone full thru axle? That and the X-Fusion shock were the only things wrong with the old HH1.

YoKev (Oct 14, 2020 at 19:47)
Chris Farley's family sued Trek for naming their fat bike the 'Farley' Don't know what happened with it, but considering it was pretty obvious where they got the name from, hopefully they had to pay up

RonSauce (Oct 15, 2020 at 3:52)
Why don't you know what happened if its something you feel so strongly about? Nobody is hiding this information from you.

BEERandSPOKES (Oct 14, 2020 at 11:44)
Well it's definitely not Sinyard or we would have seen something on BRAIN or here for that matter.

craigcanucks (Oct 15, 2020 at 15:10)
Somebody at Pinkbike better get to work on copyrighting Grim Donut.