Join Pinkbike  Login
131 Comments
For two years, Markus ‘Max’ Stöckl laid out a plan to put himself in the record books yet again. 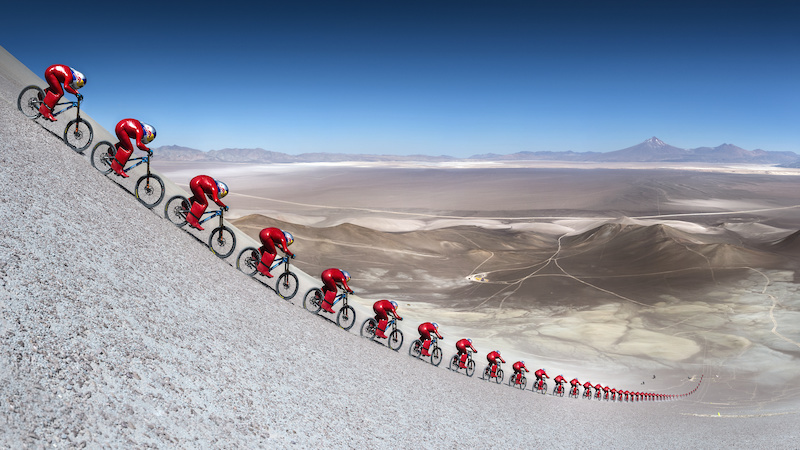 
And in just 11 seconds and at a speed of 167.6 km/h with a standard mountain bike, whose components you could buy yourself in the high street, he reached that speed hurtling down a mountain with no name in Chile’s Atacama desert. 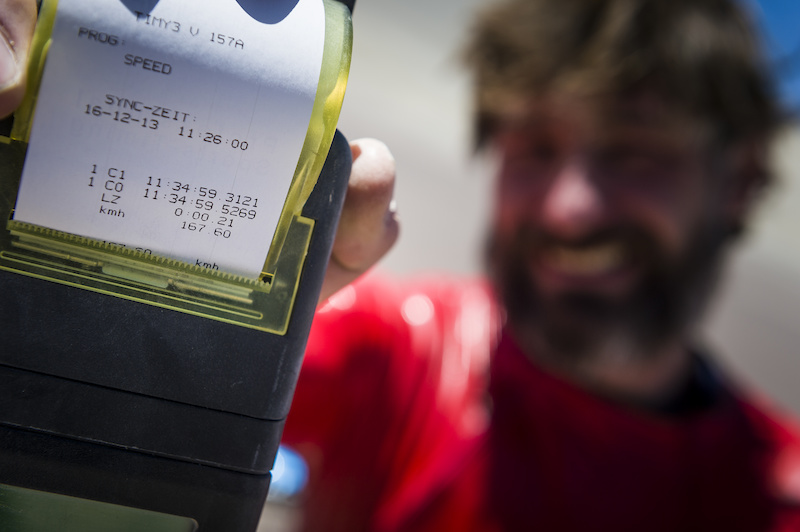 Stöckl has a penchant for the record books. Brought up in the Austrian mountains, his thirst for speed was established at a young age, his place in the speed annuals first cemented in 1999. In the interim, records have been set at the French ski resort of Les Arcs and on a volcano in Nicaragua among others. For his latest attempt on 13 December - sealed following eight practice runs - it was the barren Chilean desert with barely anything in sight from the 4,000 metre highest point from which he set off.

Training for the event:


With the gravel slope of 45 degrees deemed the perfect angle for his record, the 43-year-old's pulse hit the 170 beats per minute mark, the wind whistling past his ears on a 1,200-metre descent in a place 11,000 from his home in Austria’s Tyrol mountains.


Speaking emotionally moments after the finish and his latest record, he said: “I’m back on the mountain without a name in the middle of the desert. It’s tricky because it’s all rocky and loose at the start. It was such a long time and standing up there was like we already cried at the start. It was great fun.” 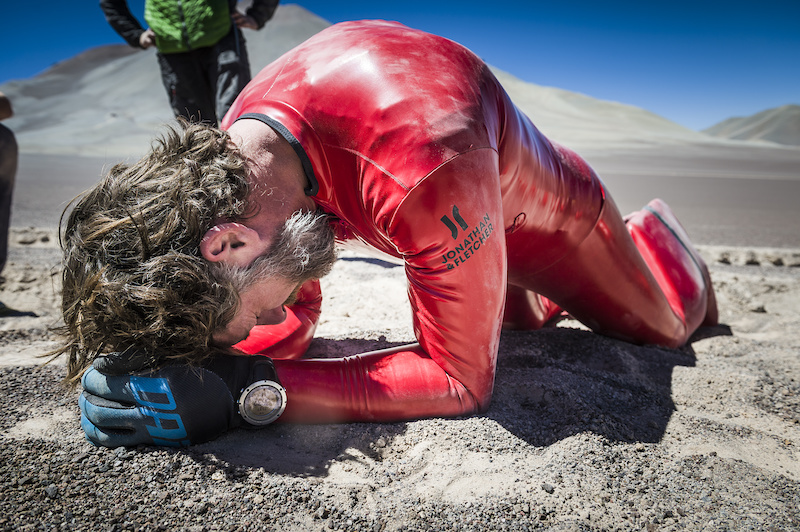 But for Stöckl, as thrilling as the successful record attempt was, it was just as much about the two years in its making.

“The whole project is an adventure,” he said. “This is the top bit of it but also travelling here with all the stuff and making our way through the middle of the desert.” His journey to 100km/h and then 120, he insisted, was straightforward but, as the descent ran out, the increased speed was harder to come by. “It’s hard to reach top speed,” he explained. “After 160, each km/h is a huge effort. If you want to reach a certain goal then you have to put it all in.” 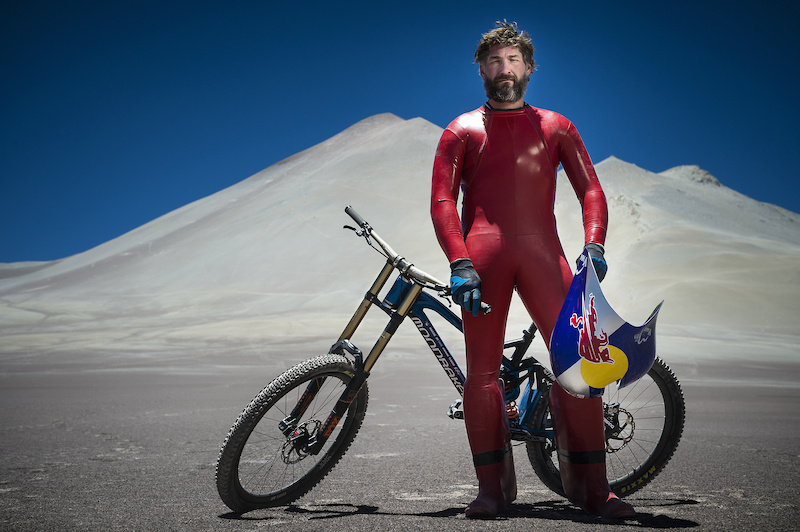 A carbon-fibre helmet, outfit, and bike were all tested in a wind tunnel to find the best design and seating position for his latest record attempt. But perhaps the most notable part of the record attempt is that the bike is one that you or I could put together… albeit with some effort and expertise. “It’s a standard mountain bike so there’s no part on the bike that you cannot buy,” he added. “Sure, it’s a high-end bike with the best parts of it but you can buy any part, nothing has been specially made.”

Height training before the attempt:


The preparation to get there included testing runs on all manner of surfaces from the snow of home to the Chilean mountains, including his fair share of falls, unsurprising with the speeds in question. Whether this latest record has quenched his thirst for the record books remains to be seen. Lying on the ground fresh after the attempt, he spoke of a desire to return home to his family. But after his previous record in Nicaragua, he said the fires still burned inside. That volcano run, in his mind, “wasn’t fun enough - it wasn’t a real challenge”. But in Chile, he claims to have “found that”.


The footage, firing out a cloud of dust visible from some distance, suggests the record itself was fairly straightforward but Stöckl admits to being perpetually on the precipice of just one wrong move, his only protection being a built-in airbag to his riding outfit. 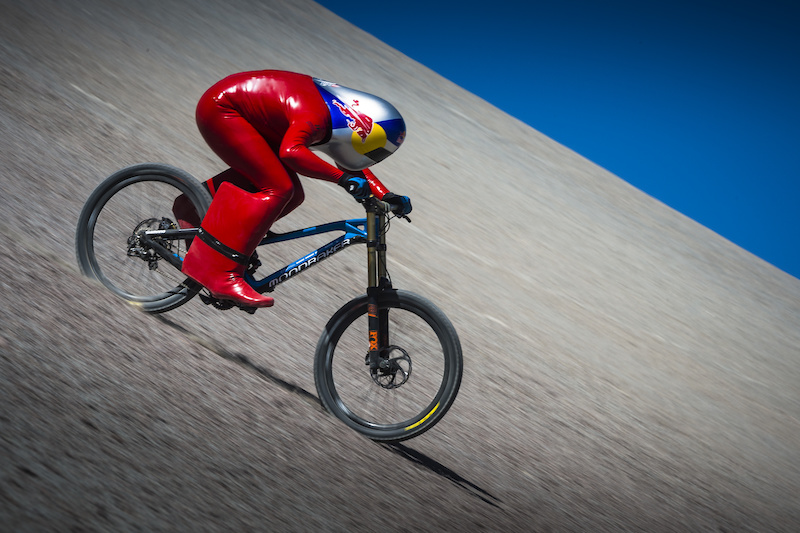 Check out RedBullTV for the full documentary coming out on April 20.

pedrosalas7 (Feb 9, 2017 at 9:13) (Below Threshold)
what's the difference? speed is speed no matter what units your measure it with.

HenryM (Feb 9, 2017 at 12:57)
@BikeEveryDay: honestly, a heavier bike would have been faster. in this case, I think a long, heavy 29er with 7 inches of very active suspension is ideal. more weight = higher terminal velocity, bigger wheels = less rolling resistance, especially on that terrain...

ryan83 (Feb 9, 2017 at 8:21)
The first picture really shows how incredible it was that they were able to get so many people to do this at once AND stay in a straight line. The future is bright my friends...

Maybe Gwin can beat him chainless?

Insane AF to see a Minion SS at mach chicken on loose terrain. Love that tire.

guytherev (Feb 9, 2017 at 9:33)
My dad wants to know the stopping distances involved as well whilst we're at it

kpperalt (Feb 9, 2017 at 7:57)
While I would love to see that, changing directions at those speeds would make me clench my ass so tight, it'll have its own gravity field XD

yupstate (Feb 9, 2017 at 7:50)
Now turn around and pedal back up. Don't we have enough bikes now that "slay downhill" but "pedal efficiently" to accomplish this?

jlew36 (Feb 9, 2017 at 7:26)
The Summon is fast bike, as proven by Hart this past year, however, couldn't they have used a more aerodynamic bike to make him go faster?

Because it's not the world record for a bike, this is:

ms-racing2 (Feb 10, 2017 at 0:12)
@Clem-mk: the records differ by the type of bike as well as on the surface you are riding on (gravel/ dirt and snow). Snow is the faster ground and the prototype bike has a massive aerodynamic advantage...

MS owns the records for gravel/ dirt and snow on standard MTBs.

the-lost-co (Feb 9, 2017 at 14:19)
Crossing my fingers I see someone at my local trail network dressed like Markus because they "saw it on Pinkbike".

This guy did it faster hitting about 223 km/h on a cross country mountain bike going down a ski slope.

rwgil370 (Feb 9, 2017 at 17:34)
38 degrees is the angle of repose, which is the steepest a slope of these kinds of gravel materials will hold at. Checked this one on my computer screen with a clinometer app and it reads as 40 degrees (close to 38 degrees), steep but not 45 degrees. Puckered my a*s watching.

onetrykid (Feb 9, 2017 at 12:37)
Imagine how much faster he'd go with Plus Tires, after all, it's been proven to be faster than regular tires on the downhill.

Tonyhawklookalike (Feb 9, 2017 at 13:58)
I kept wondering how is this possible? Then I realized a conversion to MPH was needed. Wow. 104 MPH. Still very impressive to hold those two wheels steady at that speed.

Curious what happens now... how fast could a more customized bike go? Longer bike with bigger wheels. 104 may just be the start.

bikes-suck-dont-try-them (Feb 9, 2017 at 15:40)
First Danny Hart Dominates the World Cup and now this.... Its offical Mondraker has the fastest DH Bike ever.

Lil' tip ol' man. You go faster if you pedal.

salsarider12 (Feb 10, 2017 at 22:39)
this guys helmet looks like that evil villain man ray guys head from SpongeBob. you know, the dude who rolls with dirty bubble?

blowmyfuse (Feb 9, 2017 at 9:07)
My first thought is those bearings are not greased, but probably a thin coat of oil at best along with the pawls.

wvanlogg (Feb 10, 2017 at 6:37)
I would've opted for avid brakes and then set furthest distance on a single pedal stroke record

Cabac (Feb 12, 2017 at 12:23)
This isn't even a big deal. Roadies hit 130kmh routinely while racing, and on far more treacherous descents with more fragile gear and bikes.

30 speed.
Below threshold threads are hidden

elmars (Feb 9, 2017 at 10:29)
i think there are many guys in this world how would accept this challenge and would go faster if they had redbull on there backs with $$$