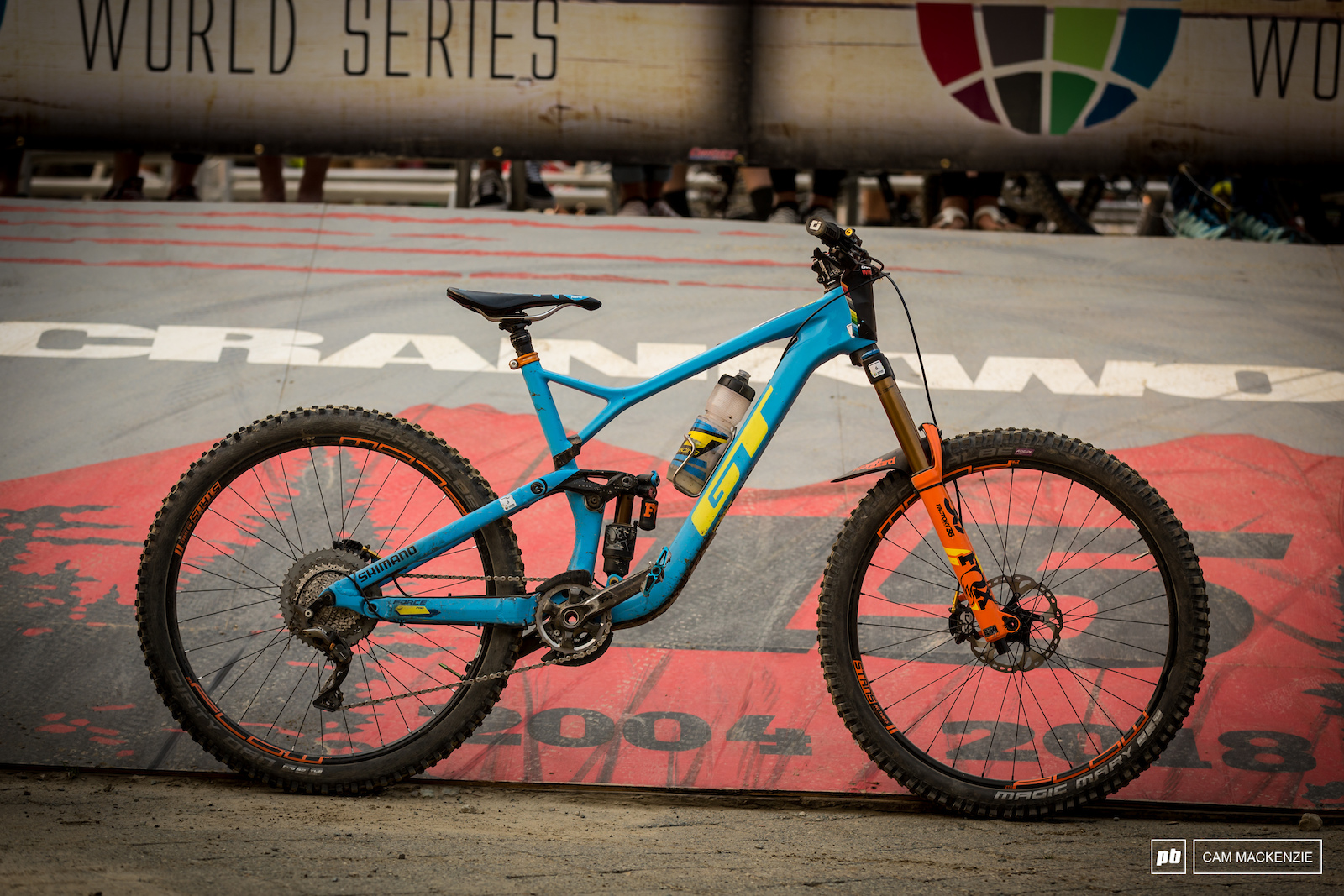 As far as bike debuts go, it doesn't get any better than a win at the premier Enduro World Series event of the year. Maes took the overall victory here in Whistler, netting three second-places and two wins, including a 20-second winning margin over Eddie Masters on the final big stage from the top. He's clearly getting along with his new GT Force, a 27.5'' wheeled carbon bike (with an alloy rear end) that's a drastic departure - but much more conventional - from the brand's previous design.

Maes was rightfully occupied with celebrating his win when PB photographer Cameron Mackenzie shot his bike, but let's take a look at what we can spot. 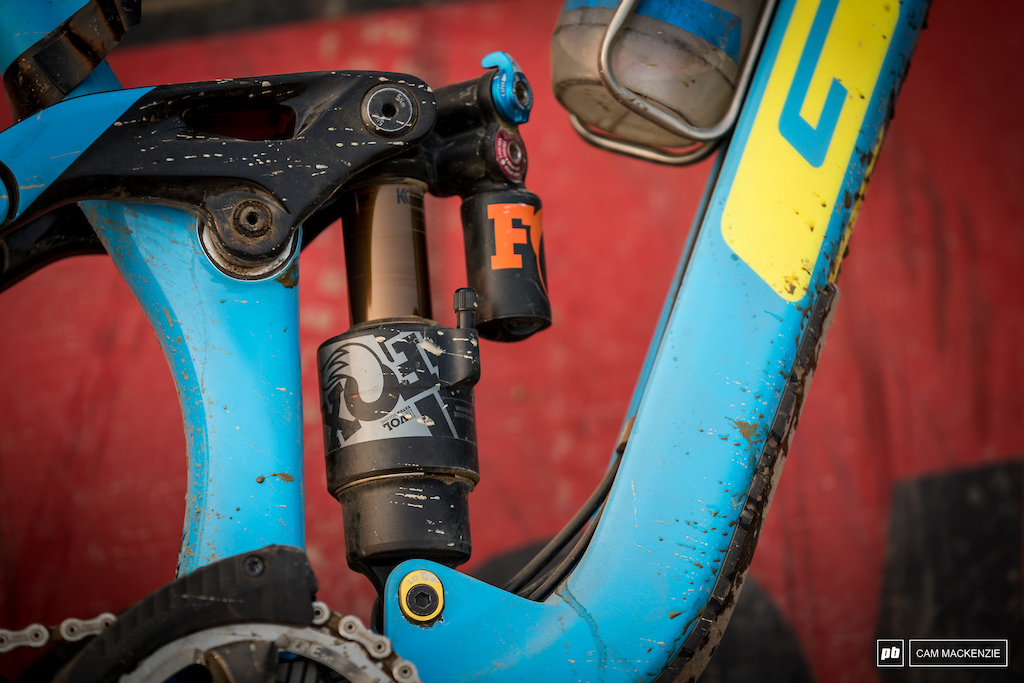 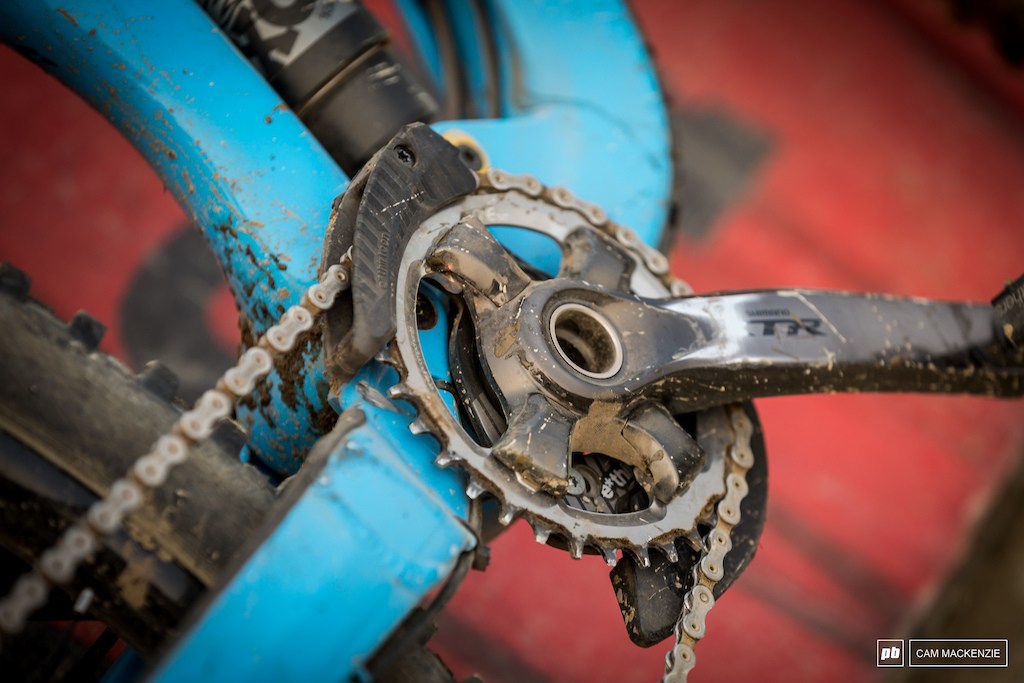 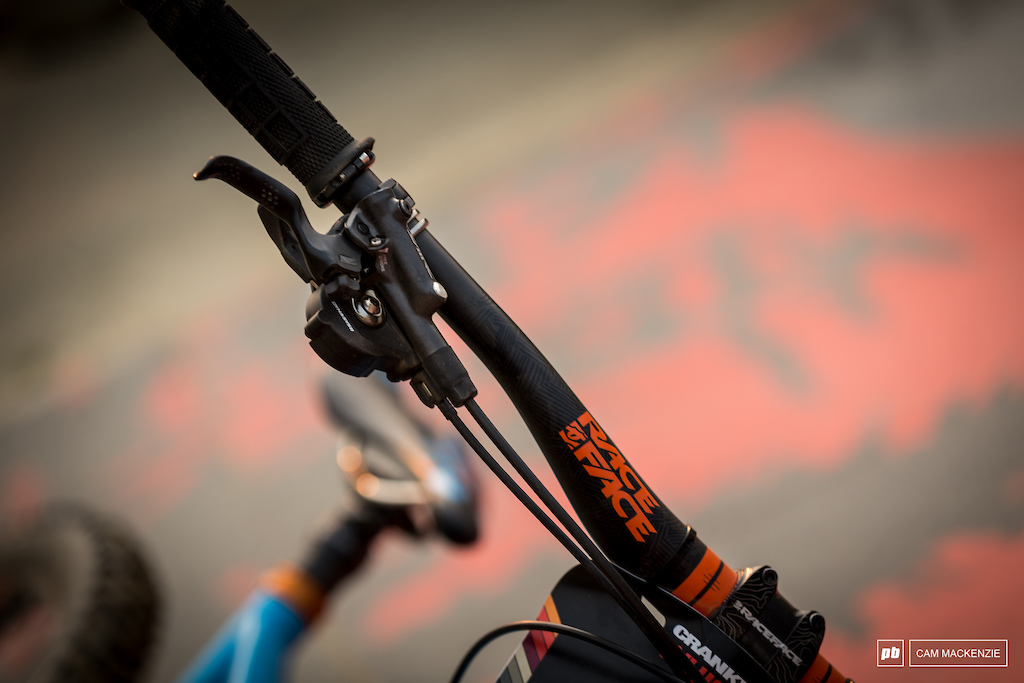 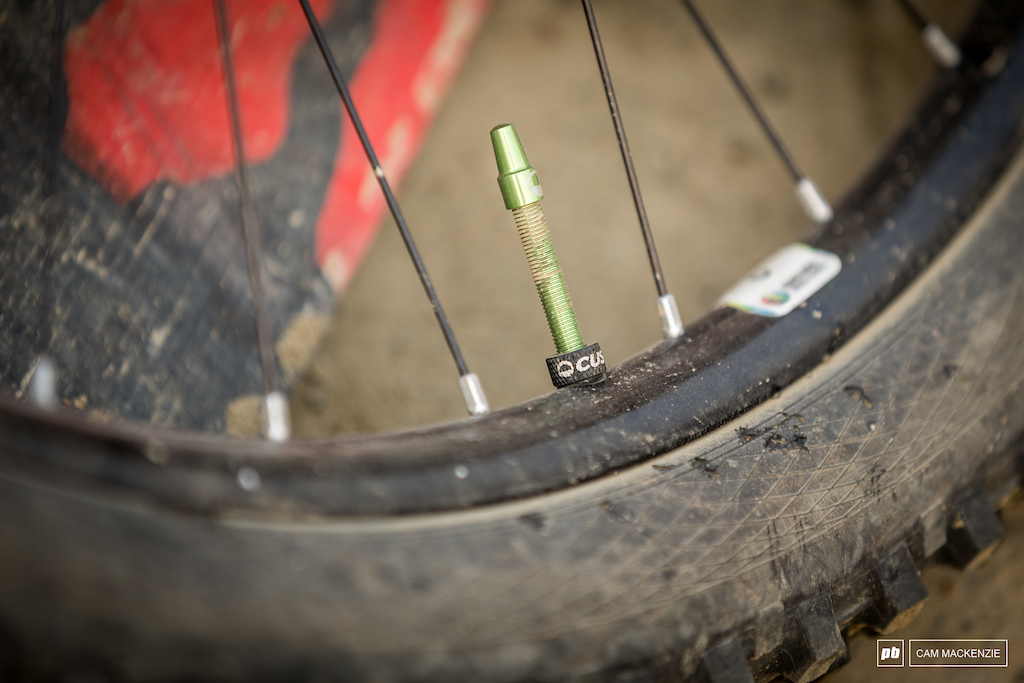 The Force has 150mm of rear wheel travel, and Maes is using a Fox Float X2 to control it. Geometry is adjusted by a flip-chip at the lower shock mount that lets him choose between a 65 and 65.5-degree head angle - he went with the former during yesterday's race.

There's a Magic Mary up front that Maes often chooses, but he went for the Schwalbe's true spike tire, the Dirty Dan, out back. Both ends get the CushCore treatment, too. Maes' main competition for the overall turned out to be Richie Rude, but the Yeti rider was taken out by a puncture on the final stage of the day, underlining how an entire weekend can go down the tubes because of a simple but devastating mechanical.

The Belgian's Force is sporting a relatively conventional setup overall, with Shimano's previous XTR drivetrain rather than the new XTR 9100 group, and a set of aluminum Stan's Flow rims. 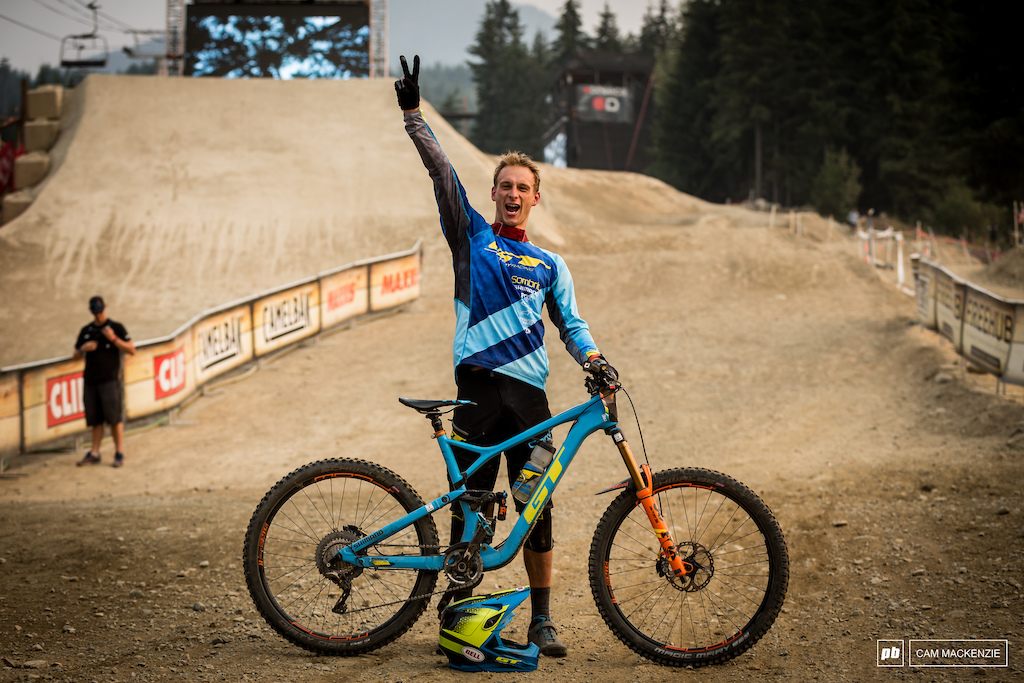 vp27 (Aug 13, 2018 at 9:10)
You will find that this Dutchman is Belgian. Belgium is a country wedged between the Netherlands, France, Germany and Luxembourg. There are three official languages, Dutch, French and German. The Dutch spoken is mainly referred to as Flemish, due to the differences in pronunciations. The country has a rich cycling culture and is about to build some MTB heritage as well!!!

Poluxnux (Aug 13, 2018 at 10:23)
Thanks for correcting that. For info Martin comes from the french speaking part of Belgium.

chriskneeland (Aug 13, 2018 at 9:16)
Fork length? Frame size? Tire pressures? Rim width? All things I look for in a bike check while deciding how to go about my next build.

zyoungson (Aug 13, 2018 at 9:48) (Below Threshold)
You can find 100 other bike checks with all the wanky details, or do a 5 second google search to find your answers instead of moaning on here.

FarmerJohn (Aug 13, 2018 at 9:50)
Pretty sure Martin rides a stock Large size of the new Force, 160-170mm travel fork and well, Stans no Tubes Flow MK3's are 30mm wide inner width. As for tire pressure, one would need the mechanic to share that closely held info

irishkiwimadman (Aug 13, 2018 at 9:55)
Yoann barelli rides a line on a cyclocross bike. Just get one of those for park laps.

chriskneeland (Aug 13, 2018 at 12:12)
@patrick-marsh: No, but I like to see the what the different set ups are capable of. If this is a true 160/150mm set up I'd consider sticking with similar set up I have now. But if the 180/165mm bikes are becoming the successful trend then I have some considering to do.

mhoshal (Aug 13, 2018 at 17:49)
@cmkneeland: so you are a trend following poser then? I guess you should just go with whatever is easiest to dust off and pull out to brag to all your friends and then put it away again because thats what I got from your comment lol buy a f*cking bike and ride it enough with the trend following bullshit already.

Balgaroth (Aug 13, 2018 at 9:31)
Alloy rims I get that especially if the new Force is stiff. Now for the spike at the back that's a big big mistery to me. Cut spikes at the front for the 10cm of dust everywhere, why not, but at the back ?!?

toast2266 (Aug 13, 2018 at 10:15)
Just speculation, but I'd guess he might be running alloy rims to help avoid pinch flats. On some impacts, I'd imagine an alloy rim would just dent a bit whereas a carbon rim would result in a pinched tire.

islandforlife (Aug 13, 2018 at 10:22)
@toast2266: Ya, during the live stream/broadcast they had the Specialized team manager on there talking about how many riders are choosing aluminum rims now exactly for this reason. Aluminum will dent and bend when taking an unplanned significant damaging impact, which allows you to throw in a tube and keep riding... vs carbon which might just break and then you're done.

The compromise is rolling weight, but he said riders were making the decision to take on more weight vs the possibility of being taken out of the race completely.

thenotoriousmic (Aug 13, 2018 at 10:24)
@Balgaroth: you use it as a rudder to slow you down on steep stuff and you get the benefit of the braking traction of a spike but with something like a minion or magic Mary on the front means you won’t get that high speed front wheel wash out that you get running a cut spike on the front. I do it when it gets really dry and loose and it works a treat.

jpcars10s (Aug 13, 2018 at 14:34)
@toast2266: I can confirm that Flow rims absorb huge impacts without puncturing the tire. (WTB Tough and Maxxis DD casings) The whole rim deforms, not just the lip. This means it'll never run true again, but your tire still has air in it...

Balgaroth (Aug 13, 2018 at 23:36)
@toast2266: Back in the days many frenchies used to run Mavic ex721 over 823 because the 721 had really weak sides making them deform instead of pinch flat the tubes (to a point) whil the 823 was as rigid as it goes and you'd never see a ding on them but you'd pinch flat much more. You'd hardly do a full season with a 721 but it was cheap, light and was staying true despite dinging like mad. On the other hand you'd keep a 823 like brand new for 2/3 seasons.

@thenotoriousmic thans for your insight I expected something along these lines but considering the drag of these tires I would have never thought of actually doing it. Even on the big rig.

honourablegeorge (Aug 14, 2018 at 1:02)
@thenotoriousmic: I was amazed when I read that Danny Hart ran something similar for that Champery run (yes, that one) - Dirty Dan rear and something ridiculous up front (Wicked Will?), because he was just riding the back wheel so much.

Can't find the article now, think it was in Dirt

If for when it gets steep and need a lot of braking but don’t want to lose that cornering speed you get with a minion or something. Basically in situations where rolling speed doesn’t matter.

oneheckler (Aug 13, 2018 at 17:28)
Come on this boy was way ahead a few years when he started this enduro thing,running dh tires when everyone else where ridding the so call trail tires ,and still he was kicking on some pre establish things(he was young what did he know)yeah right ,congrats Martin.

Verbl-Kint (Aug 13, 2018 at 14:22)
Too bad the retail version doesn't come with an X2 rear shock. It's probably a cost concern but they still should make the factory version available for those who are willing to pay (i.e. privateers).

Dustfarter (Aug 13, 2018 at 21:47)
Most bike snobs where I ride wouldn't be caught dead on that bike.
#indiannotthearrow